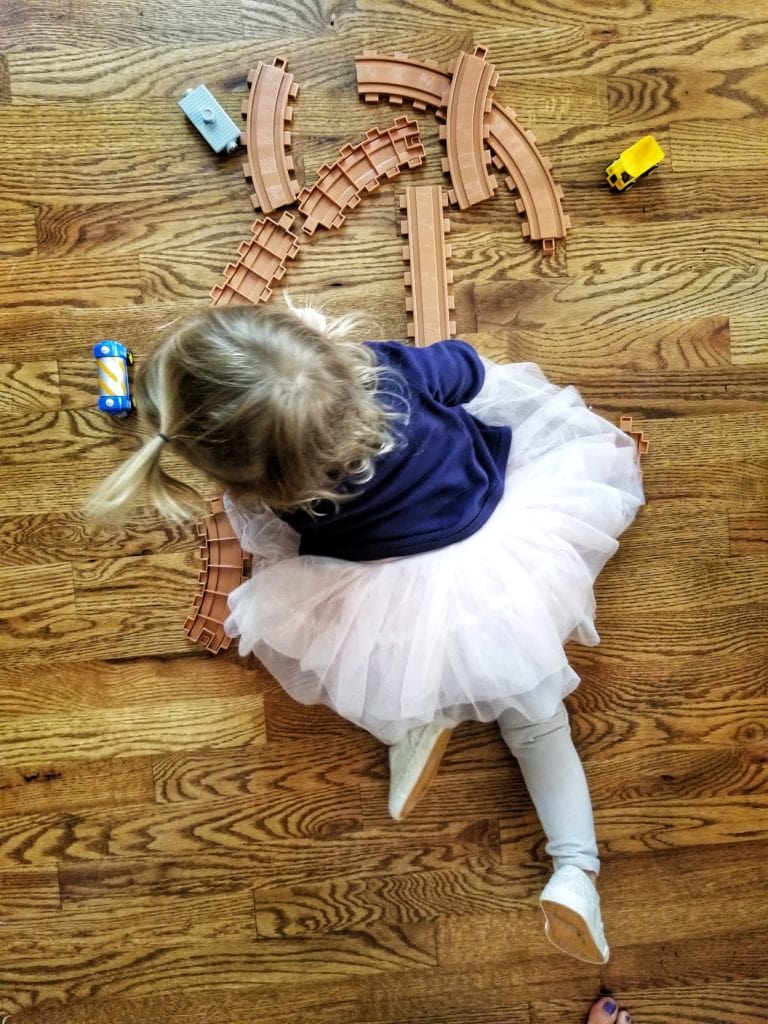 I included the above picture not necessarily to talk about the toy (its a teeny cheap-o train set from TJ Maxx), but to demonstrate that mainly kids don't need much AND will enjoy playing with toys in an....unconventional way...before they get into what they are actually supposed to do. For example, Beck prefers to have an adult assemble the train track in this set, then lifts it up and yells NOOOOOOO while letting it crash all over the floor. Then she proclaims "do 'gain!" and the adult has to start over. The adult never gets to play with the actual trains.

But! Tis the season, and we definitely love this season around here because Beck's birthday AND Christmas are within 3 weeks of her. We still have a few methods for spreading out the love that I imagine we will keep for years to come (asking grandparents to do one present per event, or one thing one time and contribute to college the next, holding toys from her party to distribute throughout the year, etc) to keep this time of year from getting more out of control than it already is, but it definitely still is fun to shop for little people.

Here are my ideas for this year! Some of it we have, some of it we want, some of it we have loved and passed on. I tried to stay away from necessities, gear, etc, and move more toward gifty things. None of this is sponsored, just things we actually love or have heard great things about from friends with kids.

OK! That's it for our favorites. I'd LOVE some suggestions for educational, compact-but-interesting toys for big kids! I know of a few other big-ish things that are coming for Beck for her birthday and Christmas, and I'll share things we love at a future toddler update!

Also, what great timing of me to present this to you right after Cyber Monday? JK I kind of did it on purpose. I find that, besides the "it" toy of the year, sales continue all month and there are probably even BETTER deals on some of this stuff in the coming weeks. Keep an eye out!

« Five for Friday (with thanks!)
Bourbon Apple Cider Spritzer »