I had an incredibly hard time spelling that title.

Ok so great news.  It's Eclipse Day!  You're maybe taking part of the day off work.  You maybe have some fun plans.  You maybe...have some produce from this weekend that needs a plan?

We are full up on tomatoes around here; my grandparents grow a ton and we have them fresh, we have them canned (hail young grandparents with time on their hands), we have VATS of salsa.  I'ts not a bad problem to have at all, and I've been loving having fresh tomatoes in some form every day.

I've seen galettes all over the interwebz for years now, and while I don't do a ton of pastry I do like the idea of a veg-filled free-form pie oozing with garlic and cheese.  I mean.  Because of course. So this was the year!  I made this simple pie crust in the food processor and used half of it (meaning there can be something else made with pie crust in my life soon), stuffed it to the brim with tomatoes, garlic, and BURRATA.  You could 100% use fresh mozzarella or any other shredded cheese you like, but the creaminess from the burrata was wonderful with the flaky crust and bright tomato flavor.

You need!  Pie crust, mayo, fresh garlic, tomatoes, salt and pepper, parmesan and burrata cheeses.  I make the pie crust ahead of time, even a day or two before if I think of it, so that it's ready to be rolled out when you're ready to bake the galette.

Prep is a lot of moisture removal for this dish.  Start by slicing the tomatoes and placing them with the burrata on lots of paper towels.  Sprinkle the tomatoes all over with the salt and pepper, then let them sit for 15-30 minutes to release some of their liquid.  Don't skip this step - the galette can get really watery otherwise.  During this time I mince the garlic and get out the rolling pin and arrange a baking sheet for the galette. 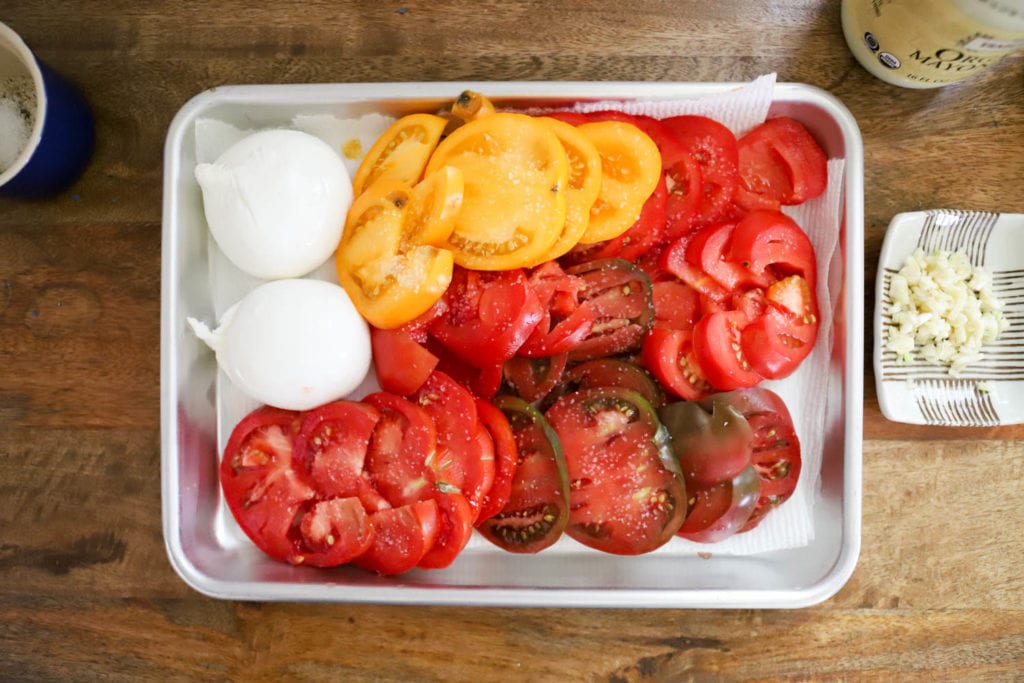 When the pie crust is ready and the tomatoes have weeped a little bit (just blot any water they've released with extra paper towels so they are as dry as possible), roll out the pie crust to a rough circle.  The dough should be thin and the circle should be about 14 inches at the widest spot. 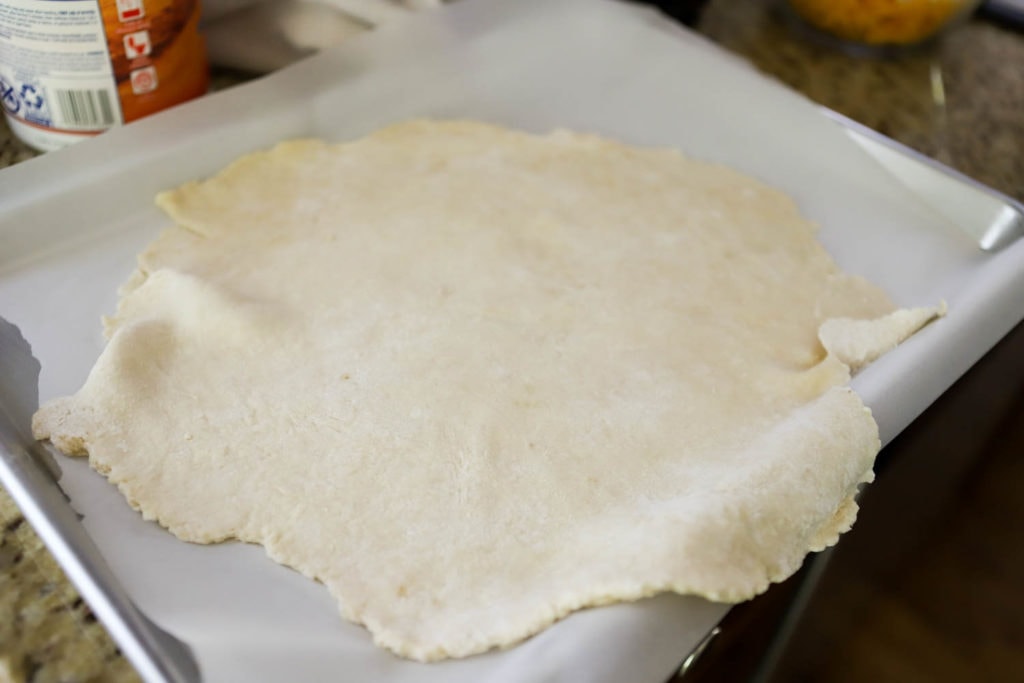 Now, we build the gallette!  Start by spreading the mayo thinly on the bottom of the crust.  This doesn't taste mayonnaise-y at all, but it adds a layer of fat between the tomatoes and crust that combats some sogginess. 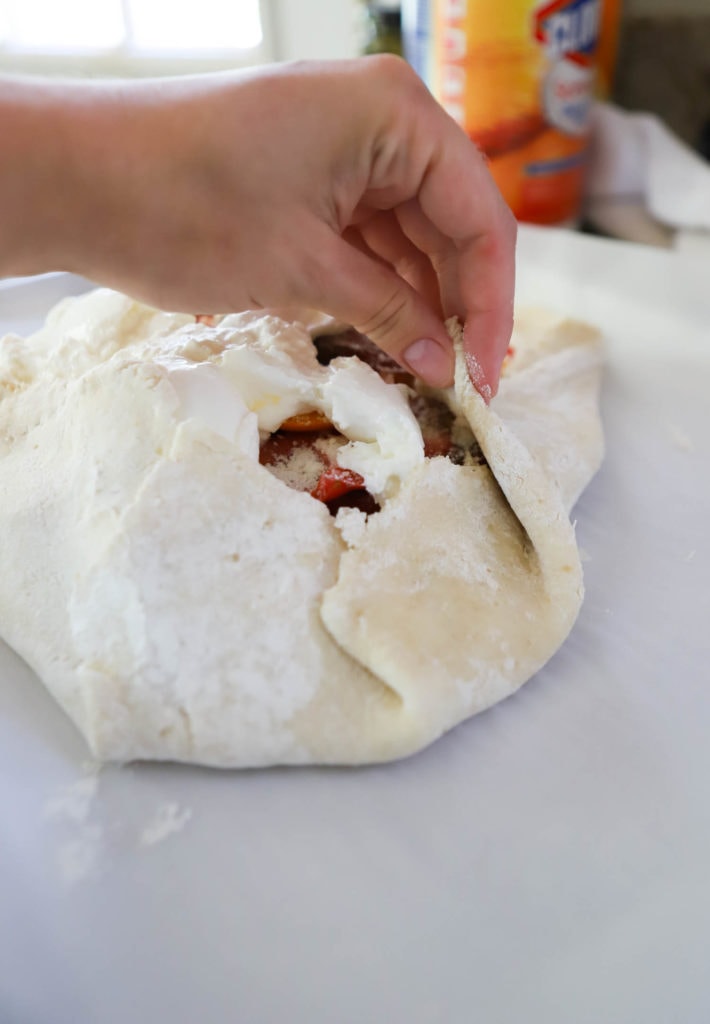 When all of the ingredients are on the pie crust, start to pull the edges up and over the tomatoes to hold everything in and make an edge to the galette.  It doesn't have to be pretty, but it will be once it bakes! 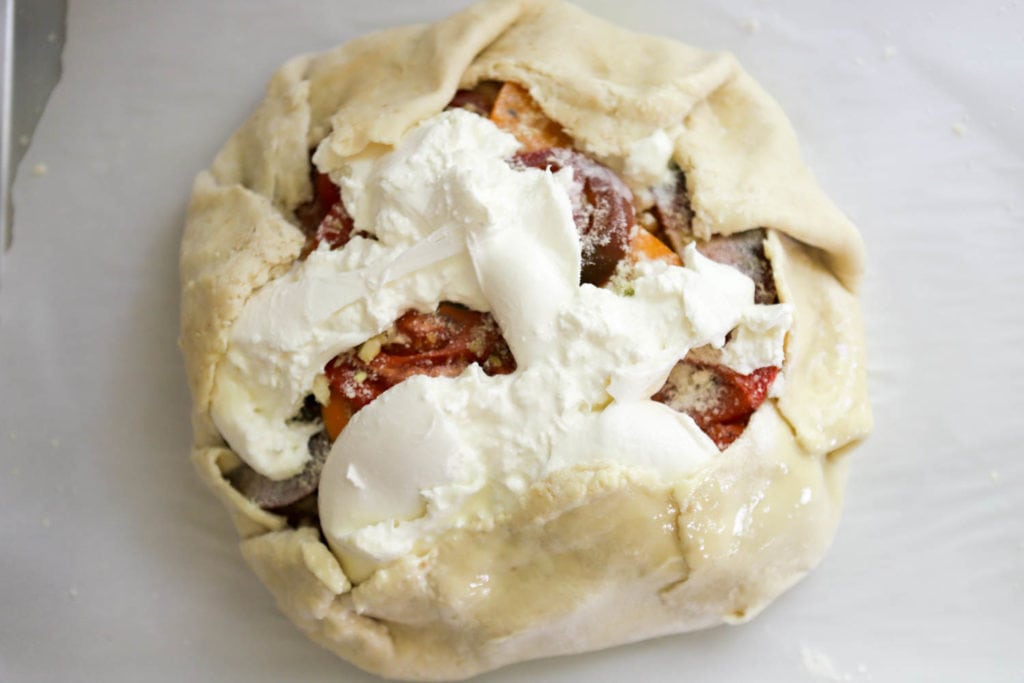 Right before the galette goes in the oven, spray the crust with cooking spray to give it a nice golden color in the oven. 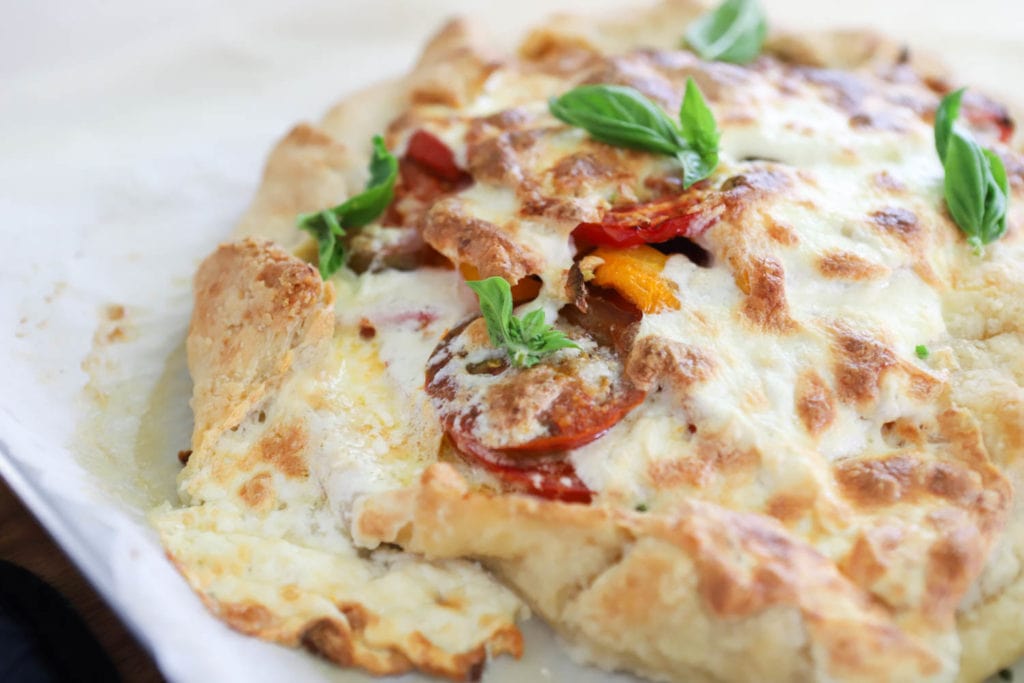 Bake the galette at 425F for 45-55 minutes until the crust is puffy and golden and the cheese is bubbly.  My cheese escaped out one side of the crust, so be sure you really pull the sides of the dough over the tomatoes and pinch them together so they hold everything in. 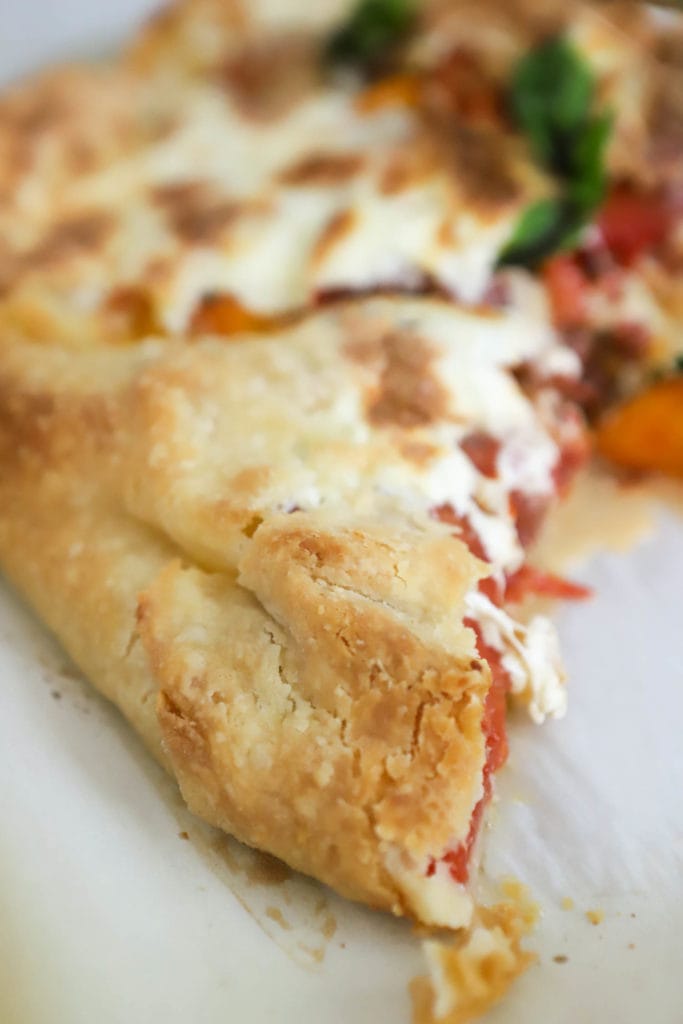 These are a few of my favorite things.  This is definitely the place where I tell you how wonderful this is, but do you need a description of oooey gooey cheese, flaky pastry crust, and tart tomatoes? 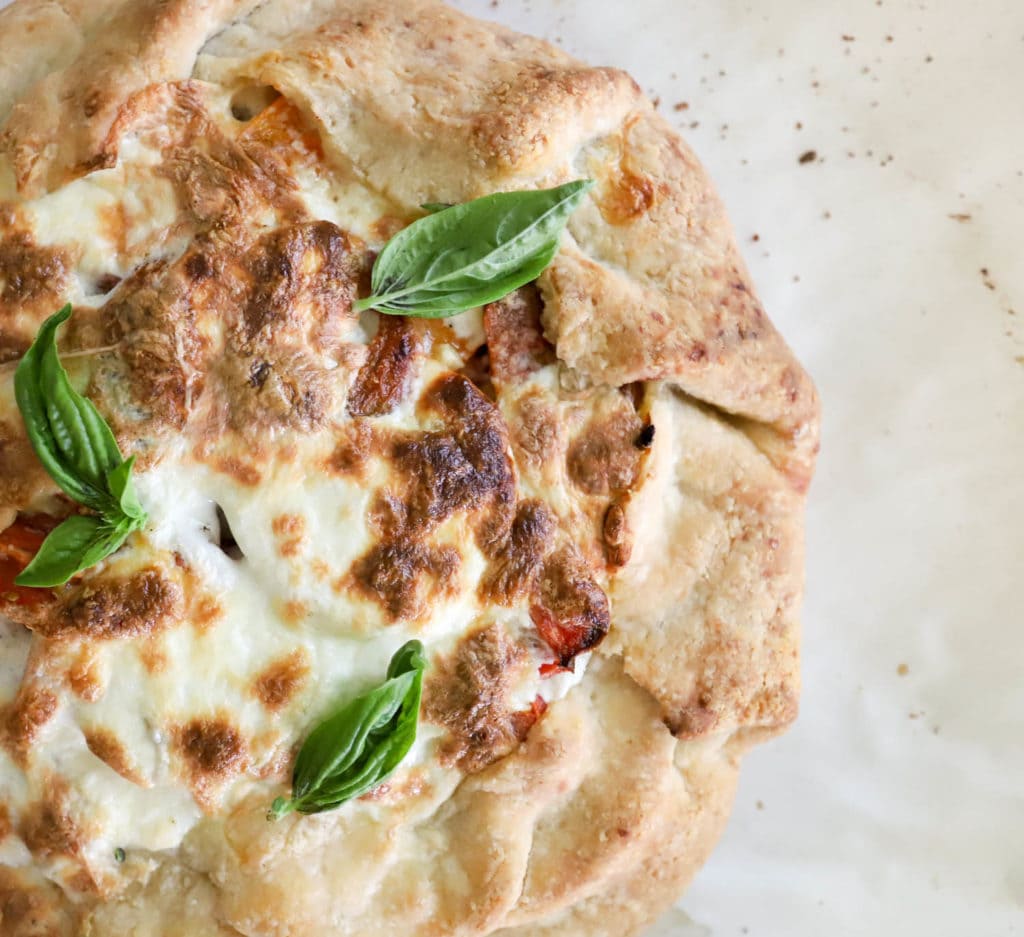 So here's your plan:  You make the pie crust now, go watch the eclipse while it rests, then bake it this afternoon as a reward for....watching the sky.  You're probably exhausted. 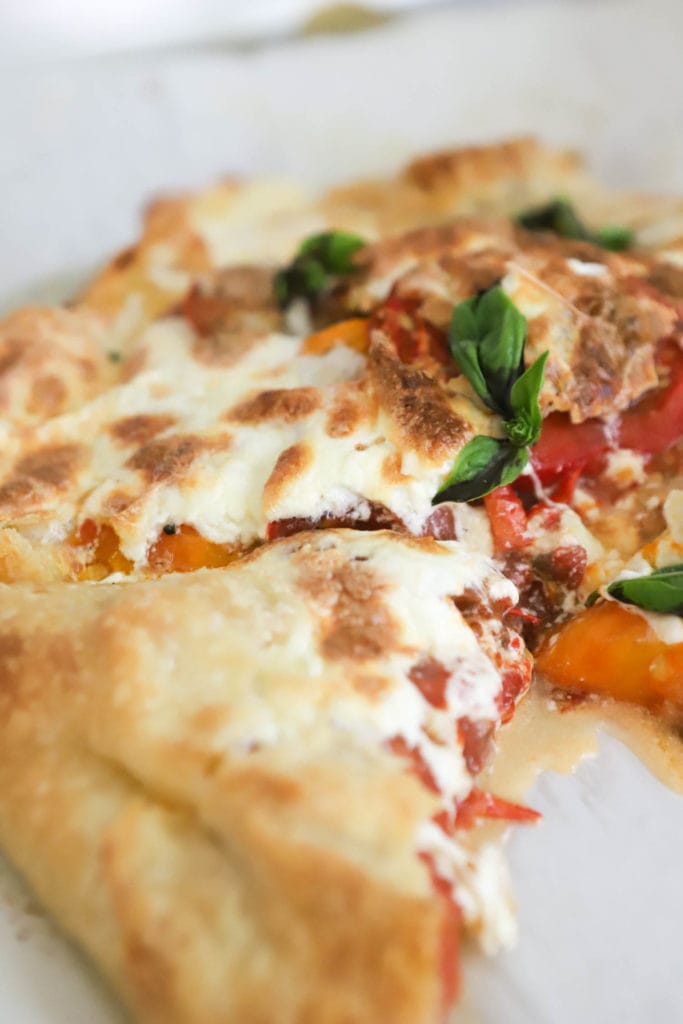