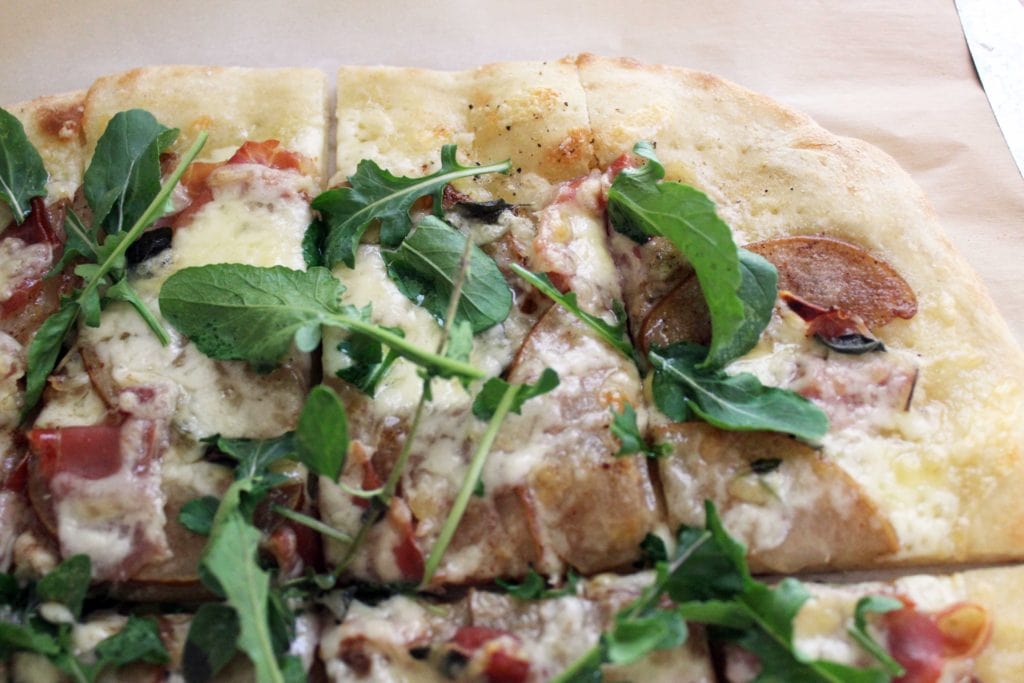 You're going to die in a good way, promise.

So, if you've been reading for more than 5 minutes you know that I went to high school in Tokyo, and because high school was pretty formative for me sometimes I say "I grew up in Japan," which is true but not in the sense that I lived there my whole life, but you get it.  And in Japan they have nashi, Asian pears.  When we first moved back they were all but impossible to find, and super expensive when we did find them.  But! Now! Apparently some apple growers have figured out that they grow well here, so we've actually been finding them this summer at our farmer's market, and they don't break the bank.

So I put them on a pizza, because what on earth else should I be doing at this time of year?  This was actually inspired by an Asian pear salad that my mom and I have shared a few times at a restaurant we frequent, but this felt like a pizza kind of day.  I used my favorite pizza crust, spiced the nashi to high heaven, and added some basic fall stuff.  It's basic because everyone does it, and everyone does it because it's so freakin good.  Basic = tried and true = good.  Go with it.

So.  You'll need a pizza crust, any kind you like, ready to go.  We get ours from this fresh pasta place at the market, and we always keep a crust or 2 in the freezer for pizza without all the effort, aka I've Never Made Anything With Yeast Yes Really.  Make your own if you're into that kind of thing!  Then you'll need fontina cheese, prosciutto, garlic, butter, an asian pear, allspice, ginger, nutmeg, cinnamon, and fresh arugula and oregano for topping.  Our oregano has done so well this year, and has become one of my favorite new fresh herbs to use. 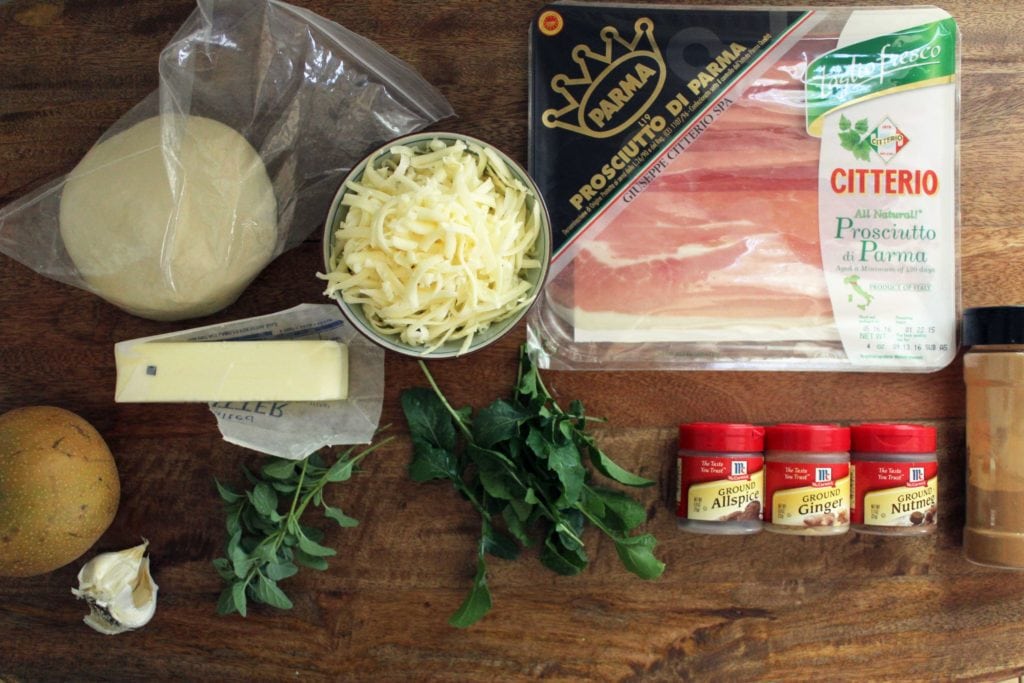 Besides the actual pizza, the only real cooking here is the pear.  First, preheat a skillet to medium-high with some butter and thinly slice the pear.  Turn the oven to 500F at this time, too. 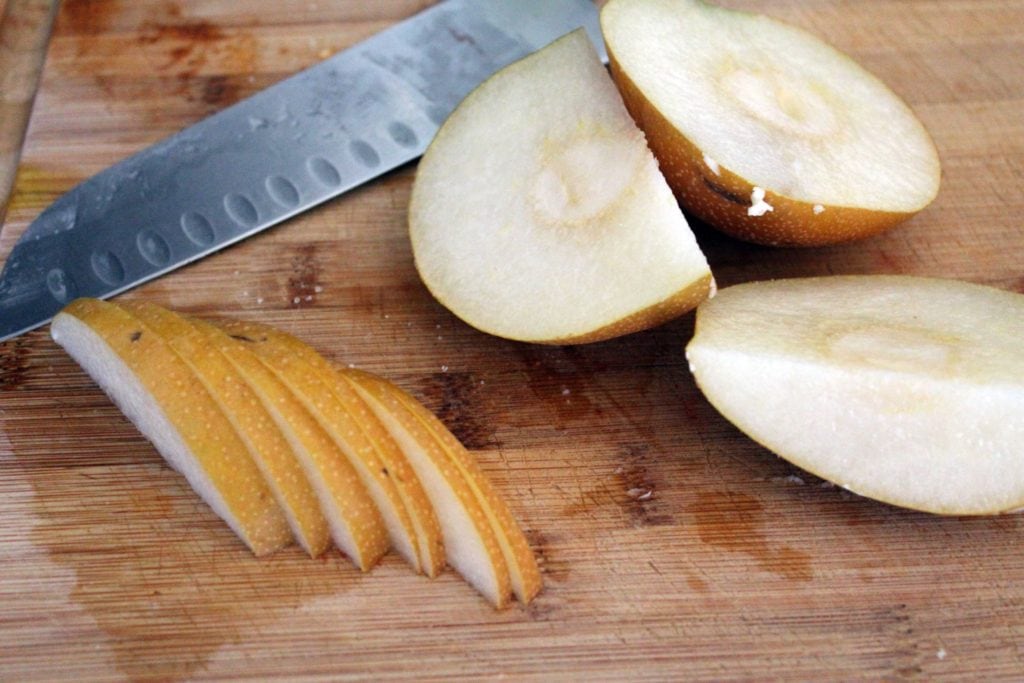 Toss the pear in the butter and add the spices.  Then, saute the pear for a few minutes until it softens and turns golden brown, turn the heat off and set it aside.  While the Asian pear is cooking, mince the garlic. 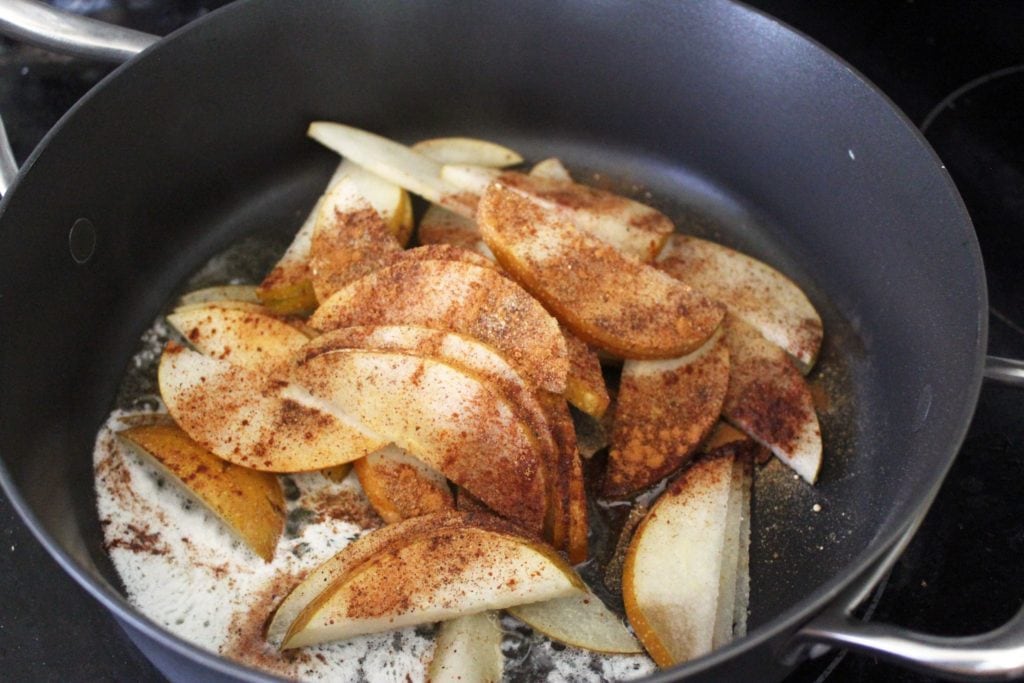 Now we build the pizza!  Start by stretching the dough to a rough rectangle, then drizzle it with olive oil, sprinkle it with salt and pepper, and toss the garlic evenly on the crust.  This is our "sauce," and holy yes, if you know what I'm saying. 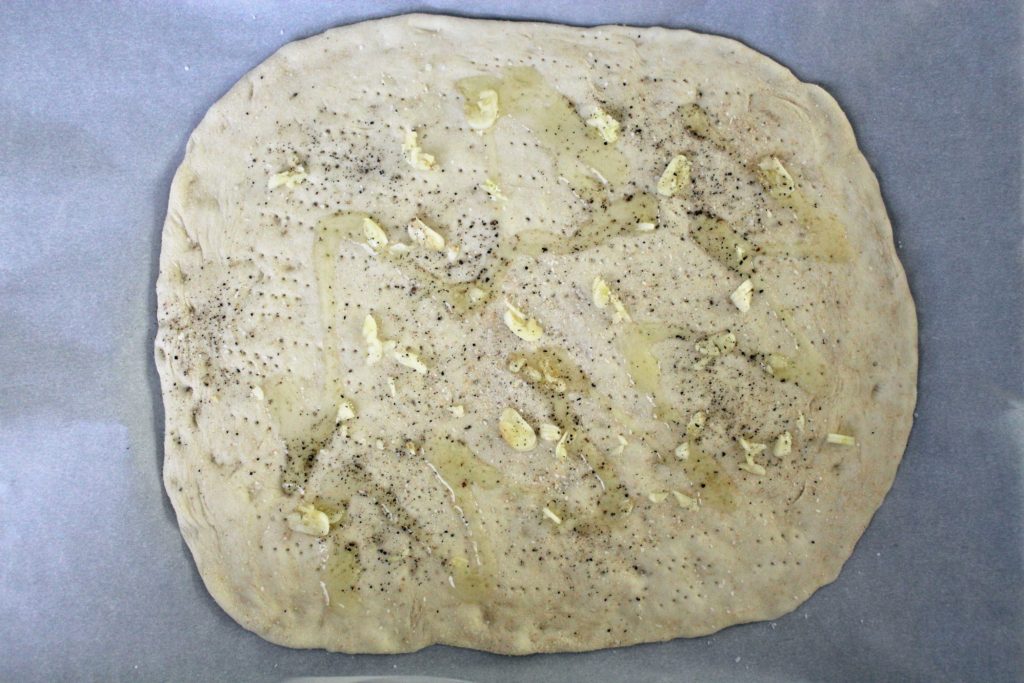 After the garlic goes half the cheese, a layer of the Asian pears (you might not use all of them, save the rest for later!), the prosciutto (just tear it into pieces as you go), and more cheese! 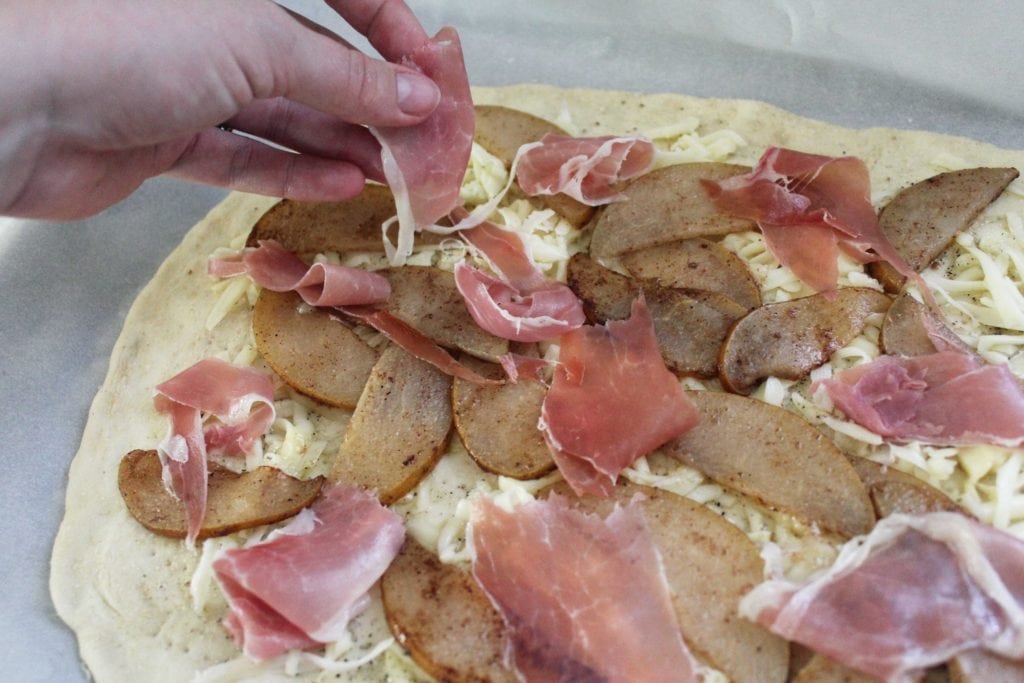 More cheese and some oregano leaves.  The rest of the cheese.  All the cheese! 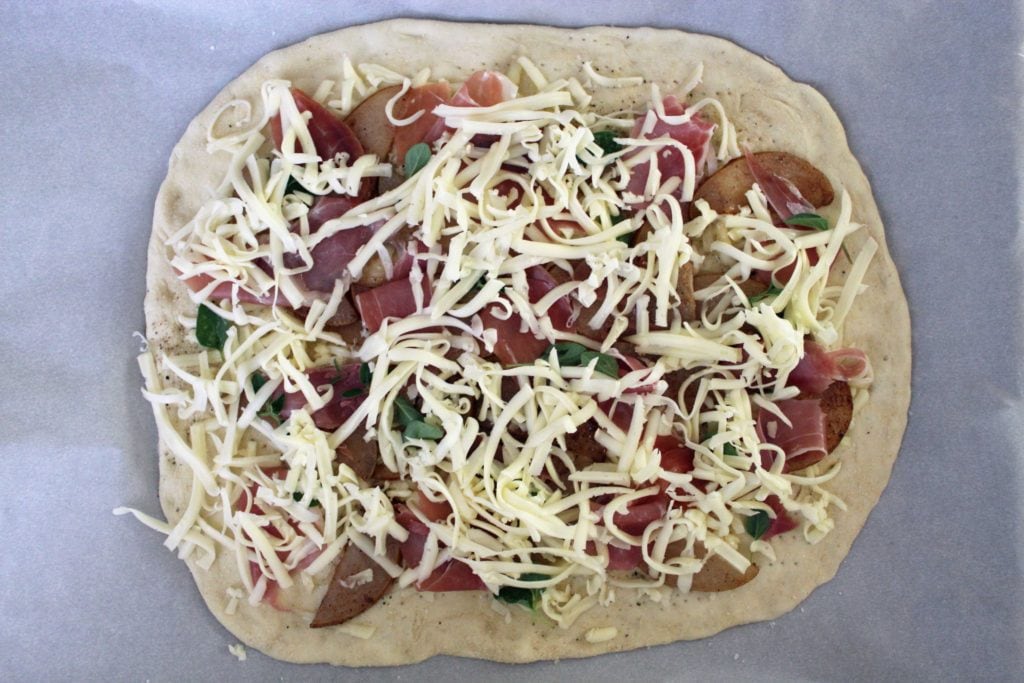 Then we bake,  500F for 10-15 minutes.  The high temperature gives the nice golden bits on the outside of the crust, bubbly cheese, but still some stretchy doughy bits that just scream GOOD pizza. 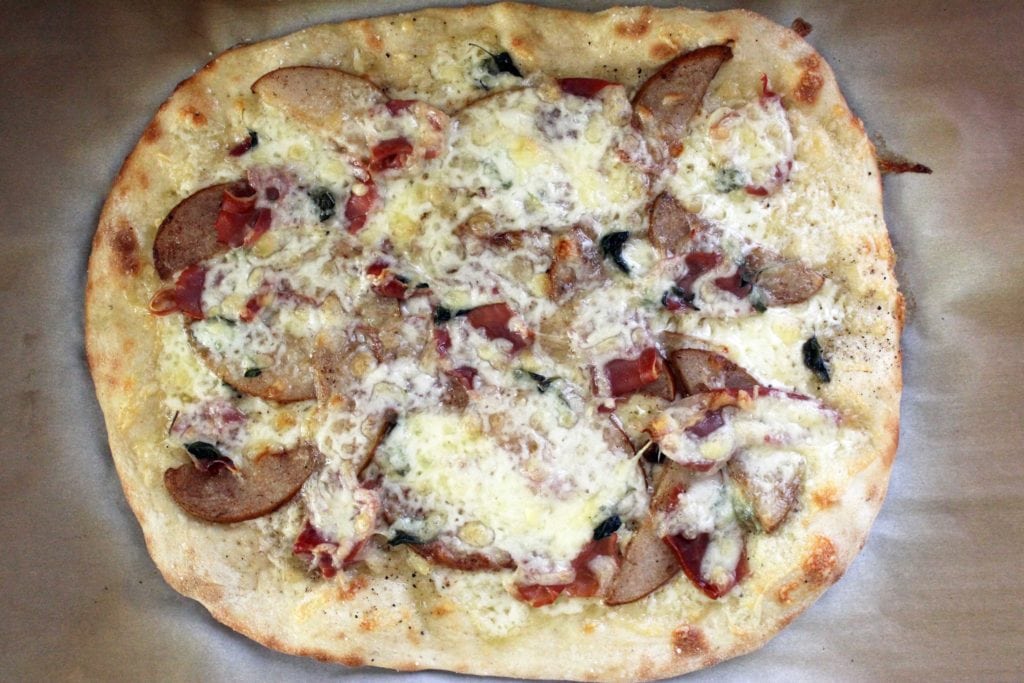 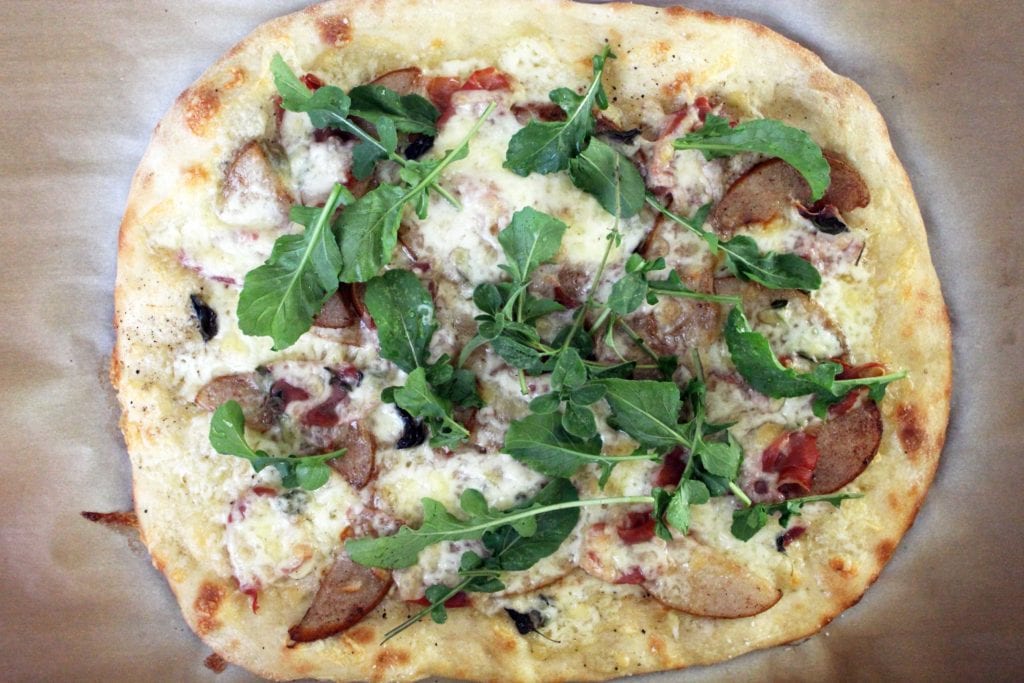 So then you decorate!  Fresh arugula and more oregano for sure.  Crushed red pepper flakes and parmesan if you need more toppings. 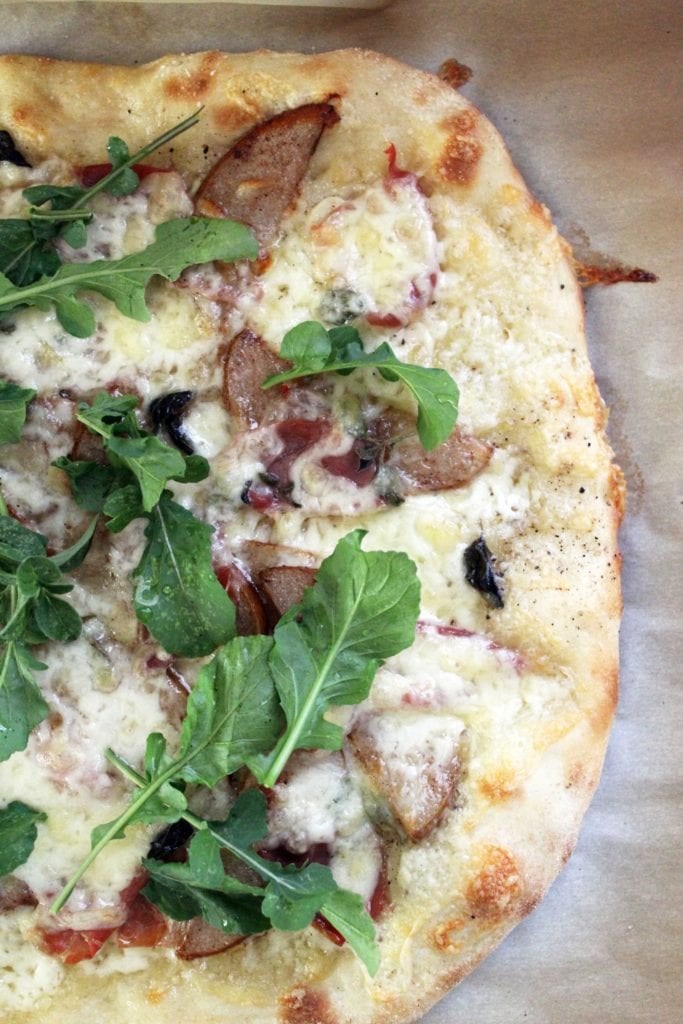 Wait about 5 minutes, hack into chunks, and devour. 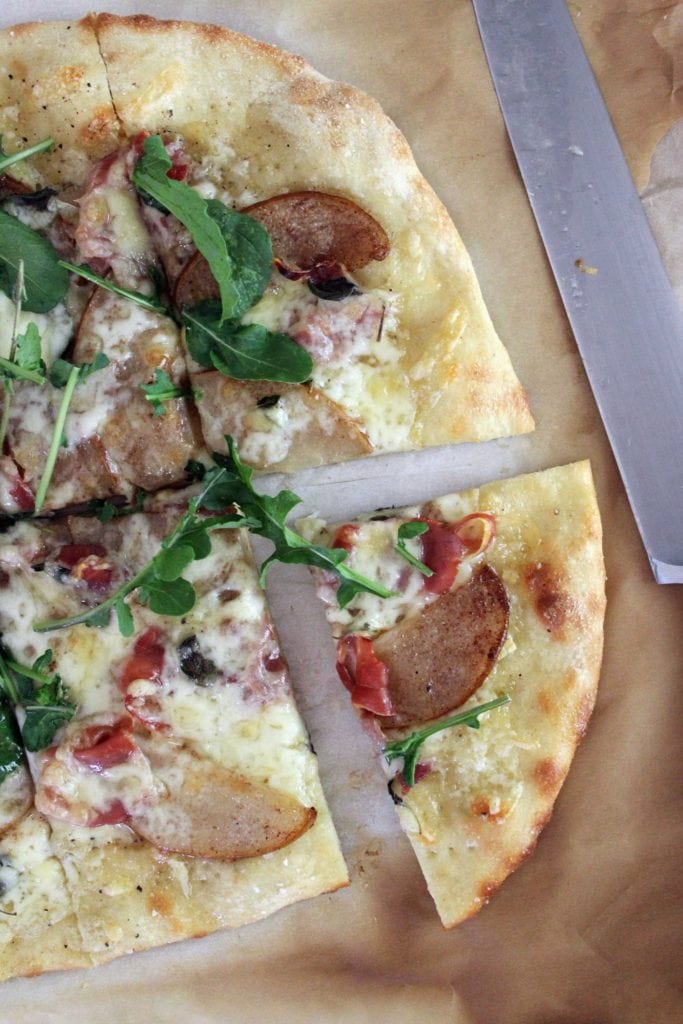 It's the sweet + salty + fresh toppings that makes a great pizza to me.  A fantastic dough as the base is just icing on the cake, hence why these flavors started as a salad idea.  Football/weekend food, maybe? 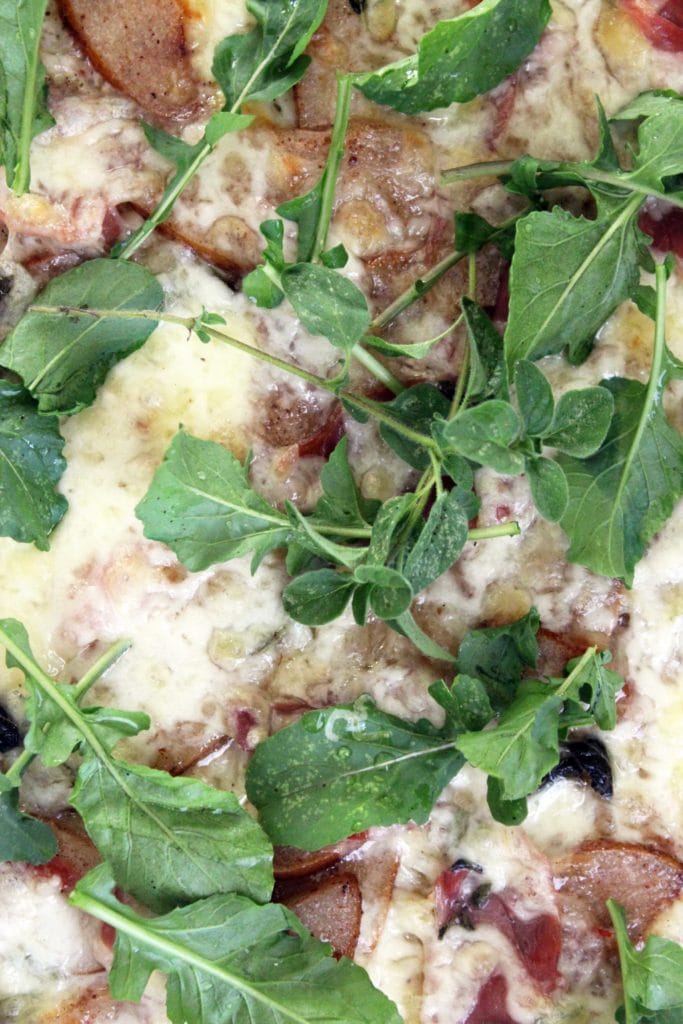 « Baby Seal Tricks
Everything Is Heartbreaking and Fun and Worrisome. »