Home » Marriage » Elective Surgery Sounds like a Breast Lift, and This Was Not That.

I think the lead-up to surgery has to be one of the most torturous things in the entire world. Not trauma surgery, necessarily, for people in tons of pain the getting-a-long-nap-and-tons-of-drugs aspect of the process is a huge relief. 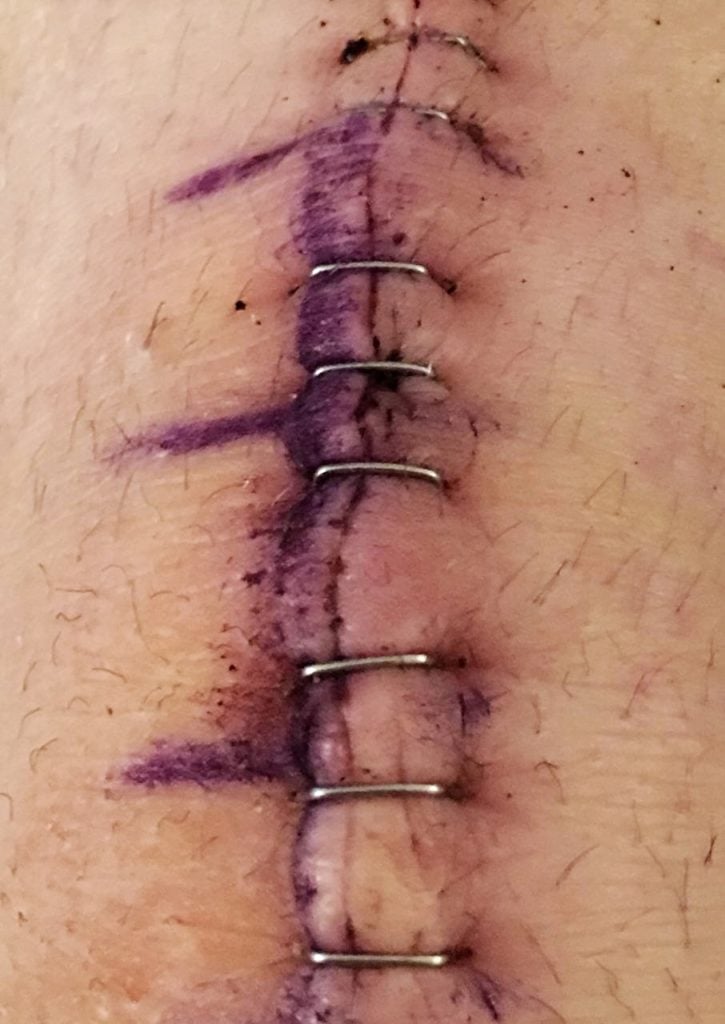 But elective surgery lead-up is the worst.

Last week Jay "elected" to have a rod and two screws taken out of his leg from when he broke it three years ago when I was pregnant with Beck. I use this word almost jokingly because, yes, he made the choice to have the surgery, but made it because he was in lots of pain and having strange lumpy swelling around the area where the screws stuck out. Elective surgery sounds like a breast lift, and this was not that.

The interesting thing about elective outpatient surgery is that they don't tell you your arrival time until 4pm the day before the surgery, no joke. You are also the first to get bumped if anything goes wrong because trauma comes first, obviously. So here's how last week went:

Thursday's late call time left Jay with several hours of working but not really while contemplating certain death (or more likely, complications). He dropped Beck off with my parents while I did my morning clients, tidied the house, wandered around, answered emails, and lived inside of his thoughts. Doing this surgery made sense in all of the normal ways - he was having pain from the hardware, didn't need it anymore, pain may get worse over time, people have hardware removal all the time. As a matter of fact, in Europe it's standard practice to take everything out once it's done the bone-healing task for which it was intended. The surgery is safe, we don't live in a third world country, all of the things made sense.

But then they kept calling it elective surgery, and Jay started to question whether he was a being a baby about the pain he was already in, whether it was worth it, what if something goes wrong. We had the "you could also get hit by a bus tomorrow" conversations, talked about the cost/risks/benefits, and I think at this point he's already glad he decided to do it. We had a particularly pitiful conversation where he said "I'd just feel so BAD if I died and left you alone!" and I answered "no you wouldn't, you don't believe in that stuff." I'm not sure if that was helpful or not, but he didn't die, so we didn't get to find out.

The lead-up for me was terrible, I'm so wonderful at worst-case imagination activities and really indulged myself in emotional turmoil; after I got home from work I wandered around the house blasting sad-ish songs and doing dishes all woeful like "the next time I do dishes I'll be a single mom" DEAR LORD LINDSAY CALM YOURSELF DOWN. Jay and I stayed pretty far from each other in those few hours, attempting to spend time together would have felt like a last meal or something. And he couldn't eat, and I was eating my feelings.

The surgery came and went, we were in and out of the building in about five hours. Jay woke up humorous as ever, chugging so many sodas that the nurse from recovery came to fetch me and said "he keeps drinking all of the sodas, please take him home." Anesthesia doesn't bug Jay, which I'm happy about. The surgeon has a notoriously poor bedside manner and came to alert me to the success of the surgery with "we got it!" all macho and jubilant. APPARENTLY these rods don't always come out of the inside of bones the way they're supposed to. And, the method is, let's say, not very refined for getting them out. Basically, they cut open the knee, move the kneecap and associated tendons/ligaments out of the way, attach something to the rod (sticking out of the top of the inside of the shin bone), and HAMMER IT IN THE OPPOSITE DIRECTION FOR TEN TO TWENTY MINUTES. If it moves, it comes out! If it doesn't, it stays in forever. Barbaric doesn't begin to describe this, and the irony of how far we've come in medicine compared to...let's bang on it and see what happens...is not lost on me.

We headed to a pharmacy for narcotics on our way home, Jay asked for a cheeseburger and Gatorade for dinner, which I was all about, his dad and stepmom helped get him to the couch, and then his leg started to bleed everywhere so I stayed up all night with him and called the on-call doctor who sounded about 25 and was all "I mean, I can't see a situation where this surgery would yield enough blood to be dangerous, you should ice it." Thanks, bro.

I slept for two hours and cancelled all but one appointment on Friday. Because OBVIOUSLY I would need the day off after being awake all night concerned that my husband was going to bleed out from a very well-secured incision on his knee. Next time. My dad took Beck for some extra hours which was great but stressed her out, then we spent the weekend trying to keep her occupied, keeping Jay comfortable, and keeping up with regular work/chores/life which I largely failed at.

Every day since has been better and better, Jay is walking and not gushing blood and has taken a bath and is hardly using medicine at all to manage the pain. It's too early to tell how much relief he'll have to the actual original injury, but it is exactly the right time for me to make a very long list of things I want him to do in the new addition, which is what you do when your spouse has lived through an uneventful and low-risk surgery that still scared you to death - you put them to work hanging things on the walls while standing on one leg, to make them grateful for this life.