Preheat the oven per the instructions on your brownie box, and mix the pumpkin, brownie mix, and spices together in a big bowl.

Grease a baking pan and dump the batter right in.

Then we bake!  Go 5 minutes or so LONGER than the cooking time on the box.  It's unusual for brownies, but the pumpkin and lack of leavening from the egg makes these suuuuuuuper moist, almost a cross between fudge and a brownie.  So you can totally go longer on the cook time to help them stand up a little bit better.

When the brownies are baked, let them cool for at least 15 minutes, then cut them into squares and serve!

I like to cut these super duper teeny, especially around time of year when there are lots of desserts always present.

Moist.  It's a good word to use for baked goods, no matter how you feel about other applications of the word.

Make these this week; they're perfect for the need-something-no-time-or-bright-ideas camp that a lot of us fall into the Monday before Thanksgiving, myself included.  Enjoy!

PS: If you're into brownies and blondies, I've got you covered!

Super yummy brownies made with pumpkin and pumpkin spice for a delicious and easy fall dessert. 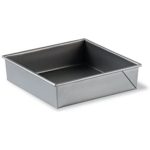 If you don't have pumpkin spice mix, use a combo of cinnamon, nutmeg, ginger, and allspice - 1 teaspoon of cinnamon and ½ teaspoon or so of the others. Or just cinnamon!