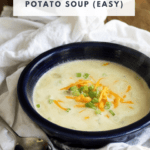 So, you know it's cold.  My friend Amanda makes fun of me when I say it's freezing here, but it is currently 13 degrees outside and is supposed to get down to 8 or below tonight, so my all measures it's effing freezing.   And so we need soup!

There was a restaurant we used to go to a TON in undergrad; it was right near campus but was kind of a legit restaurant instead of one of the fake Aramark restaurants that take your meal plan and have kind of the same foods at every location.  This was locally owned and had this baked potato soup that was just ridiculously good.  Now, I've spent years trying to recreate it and am definitely not there yet, but this version of baked potato soup is REALLY good.  I cheat time by "baking" the potatoes in the microwave, and this soup is done even quicker by using leftover baked potatoes.

The ingredients are easy!  You'll need potatoes, celery, onion, green onions, cheddar, heavy cream, vegetable (or chicken) stock, and sour cream.  EVEN BETTER is if you have leftover baked potatoes because then this soup takes approximately 5 seconds to make.  I love making a big batch of crock pot baked potatoes for meal prep, and then having this soup later in the week with the leftovers.

Like I said, I prick my potatoes all over and microwave them for about 20 minutes until they're super tender, then I let them sit until they're cool enough to handle.  This can be done in advance or while you start the soup base.

While the potatoes are microwaving (if you go that route), start on the rest of the veggies!  Heat a large soup pot to medium heat with some olive oil, and chop the celery and the onion.

Add the celery and onion to the pot, and let it cook for 5 minutes or so to soften just a bit.

While that's happening, grate the cheese and slice the scallions for later.

Then, add the stock.  Use any stock you have here - veggie, chicken, even pork would work here.

Increase the heat to medium-high and let the liquids come to a boil.  While that's happening, use your fingers to peel most of the potato.  The skin should come off easily!  Don't worry about getting every little bit - some skin adds great texture to the soup.

Cut the potatoes into a bite-sized dice.  We'll puree half and use half for texture at the end. Pureeing the potatoes gives a thick, creamy soup without having to use any flour or roux. The soup is super thick and creamy but gluten free.

Now, when the stock and veggies come to a boil in the soup pot, add ⅔ or so of the potatoes to the mixture.

Then add ⅔ of the cheese.

And the cream and sour cream!

Stir everything together, and use a blender or immersion blender to combine the soup into a puree.  It should be really smooth, so be patient!  Also be careful that you don't blow up your kitchen if you're using a regular blender.  I hear that happens.

When the soup is pureed, add the remaining potato and most of the scallions to the pot.

Stir everything together, and taste!  Add as much salt and pepper as you think this needs. Potatoes tend to absorb a lot of salt, so don't be shy getting this soup really flavorful.

What Can I Add To Potato Soup for Flavor?

Now for the fun part! Toppings. I mean, sky's the limit here, right? Whatever you enjoy on a loaded baked potato is what we insert here. I love scallions, cheddar cheese, and bacon, but extra sour cream, salt and pepper, or even hot sauce are delicious here.

I kept this soup vegetarian, but feel free to add bacon to the soup or as a topping!

The best easy loaded baked potato soup ever! Just 9 ingredients and half an hour of your life is all you need for this delicious soup. 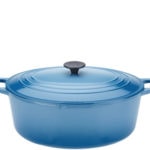 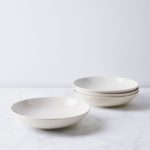 I bake my potatoes in the microwave for about 25 minutes, but use any cooking method you like! I also love this crock pot baked potato method.

This soup is vegetarian as written, but feel free to add cooked crumbled bacon to the soup or as a topping!

« Thinking It Through To Its Logical End
Healthy + Cozy Food »