I know, it's another vegetarian dish. 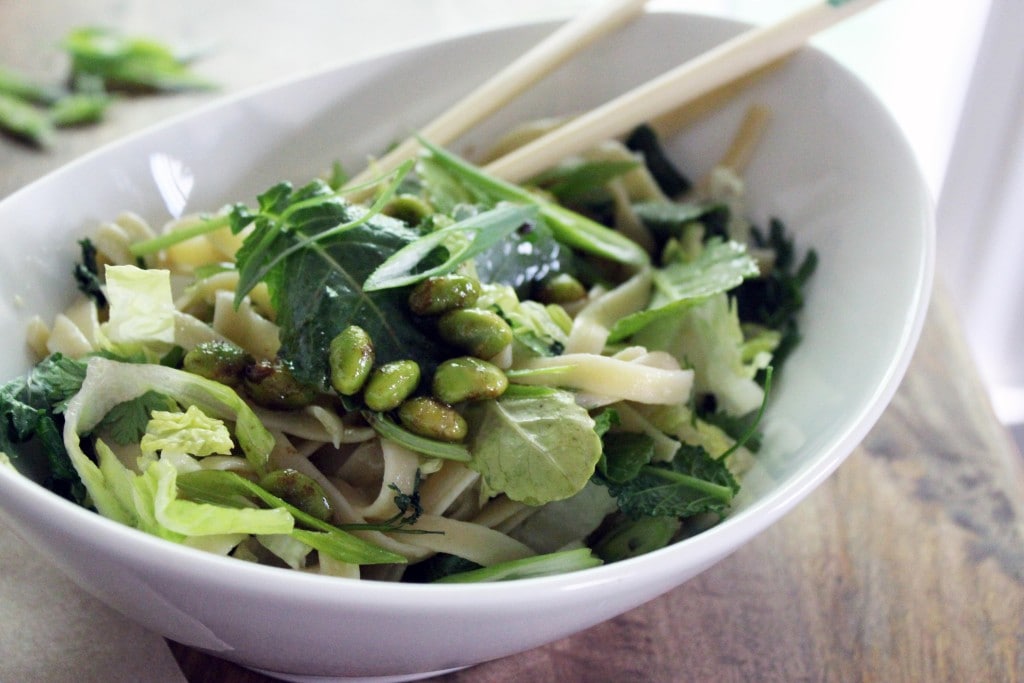 But, I have reasons for it.  I mean, first, obviously, I'm married to one of those clowns, so if I cook meat I have to be really invested in eating all of one thing for several days.

Unless, of course, Jay eats it to "help."  You know, as a sacrifice to our marriage.  But, I'm also of the belief that most people (mainly Americans) eat WAY too much protein (I didn't make that up, other smarter people agree with me), and our bodies and planet could afford more meals that involve protein and veg but not meat.  So here we have it!  I've said for years that Asian flavors really lend themselves to that kind of meal, and this is zero exception.  We have noodles, vinaigrette, greens, and super sexy almost friend edamame, which is NOT a bad thing.

Because, even though Americans might eat too much meat, we are also nothing if not frying little things to go on top of salads, amirite?  #murica 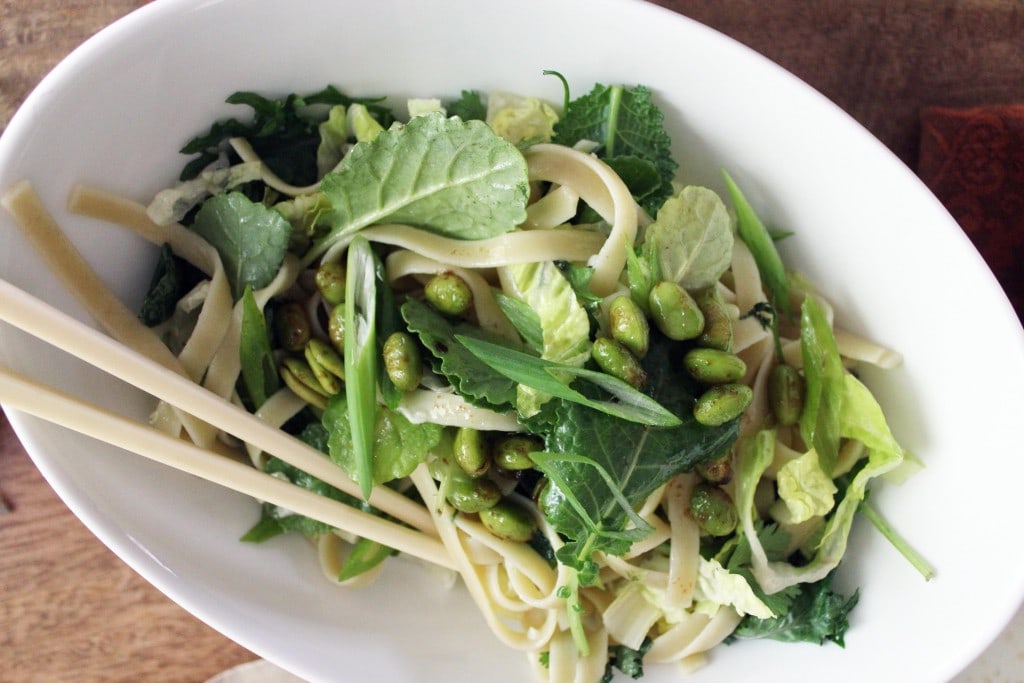 Let's do this.  You need long noodles (rice noodles are cool for a GF version of this), shredded lettuce and other greens (I have shredded romaine and a few handfuls of baby kale here, but use anything you like), green onions, edamame, lime, butter, cilantro, rice vinegar, soy sauce, fish sauce, sesame oil, garlic, and fresh ginger.  I keep ginger in the freezer, and have LITERALLY been using the same knob of it for over a year.  Doesn't go bad, doesn't freezer burn.  Just grate a little bit of it off (you don't even need to peel it if it's frozen) when you need it and stick it back in the fridge! 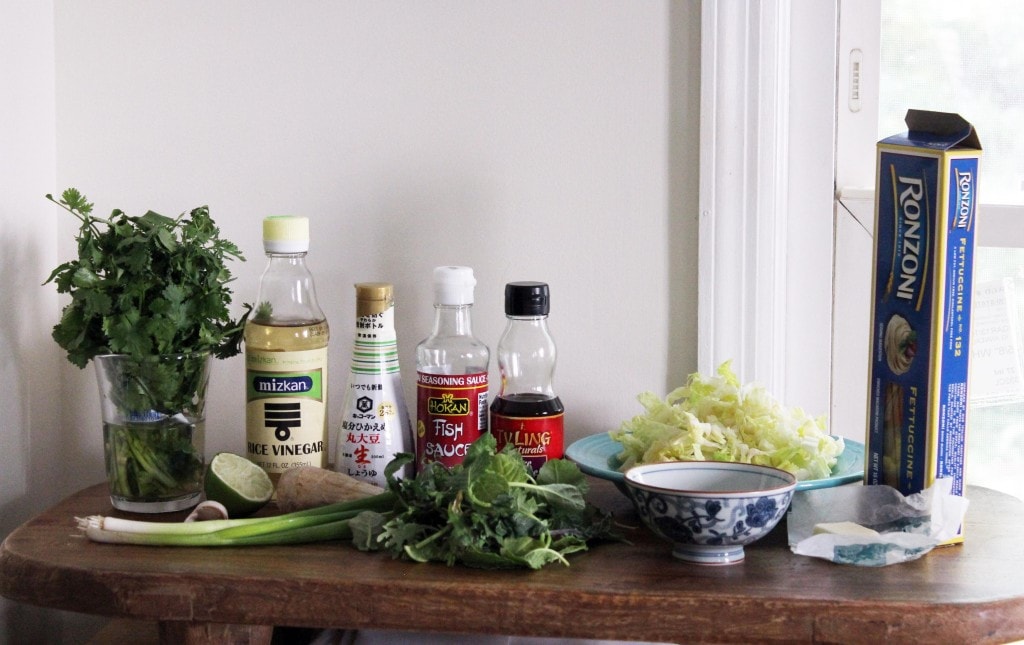 First, let's make the dressing while the pasta cooks.  Grate the ginger and the garlic!  We're not looking for a ton of either, just enough for good flavor to the dressing. 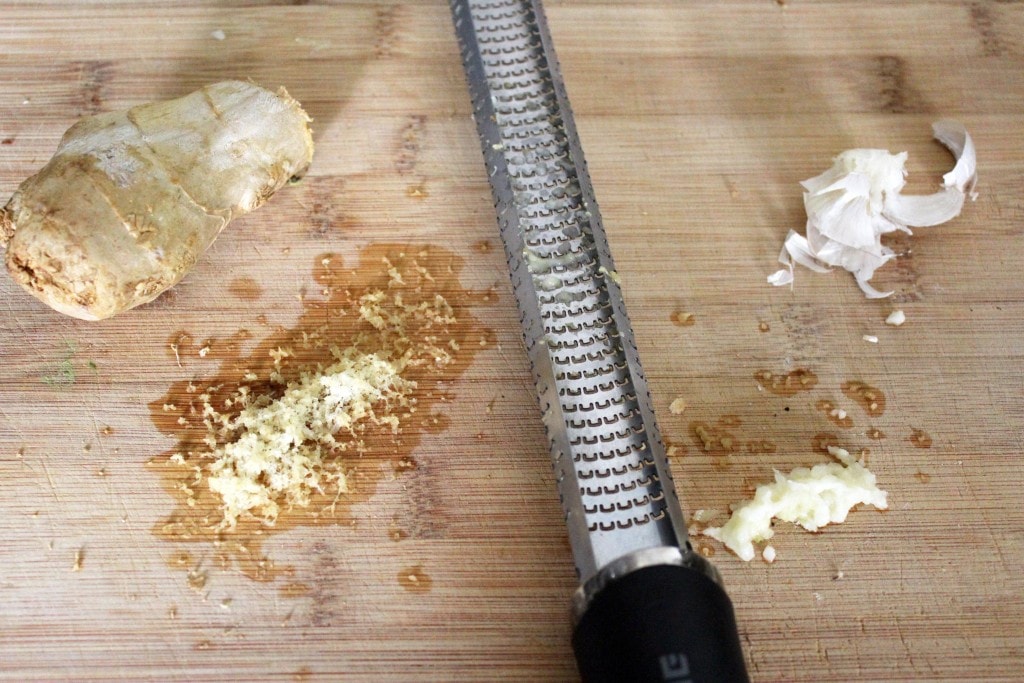 Then, add the ginger and garlic to a jar with a tight fitting lid. 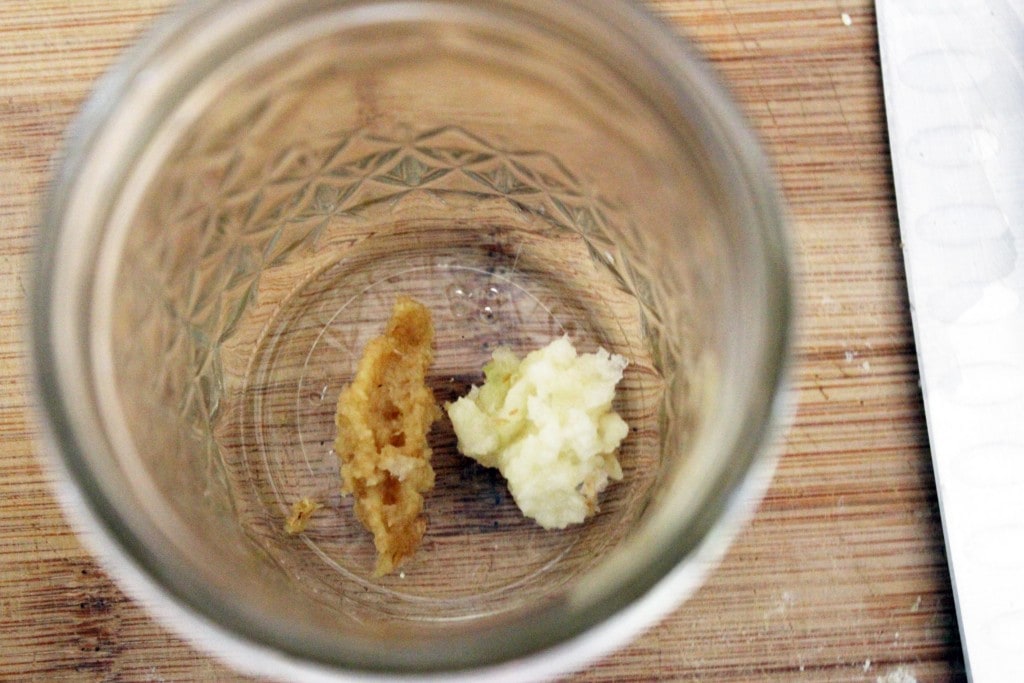 Add the rest of the ingredients, and shake everything really well to combine it.  Taste the dressing, and adjust the seasonings- if you don't like so much tang, add more sesame oil, if you need more slat, add more soy, etc. 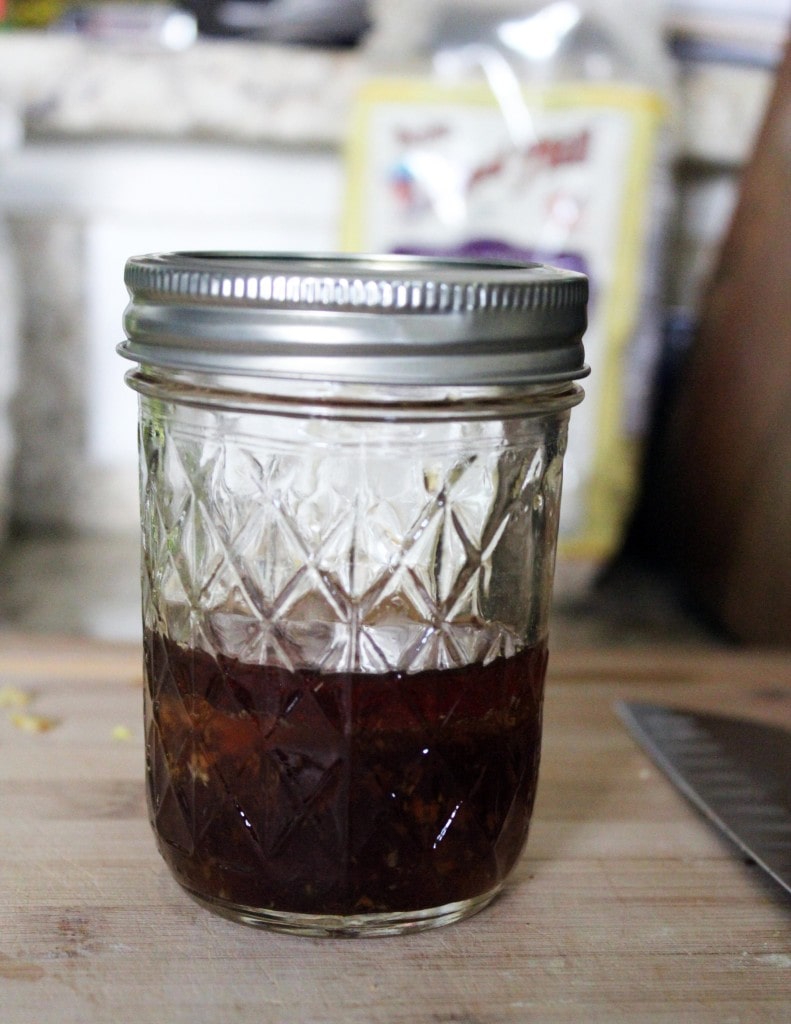 Now, onto the edamame!  Add the butter to a small skillet over medium-high heat. 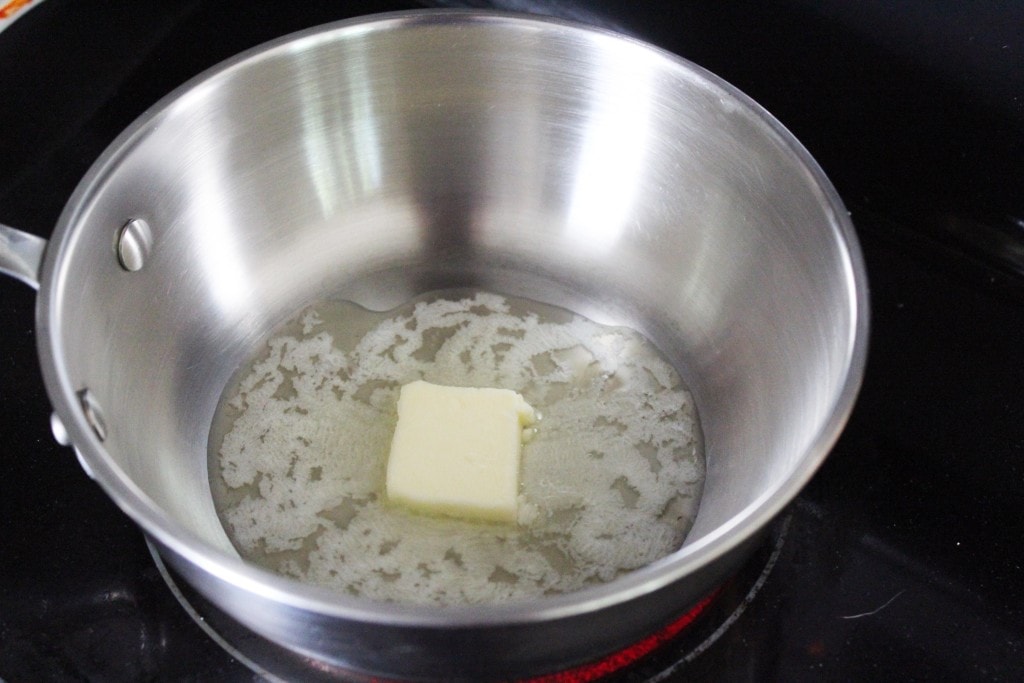 When the butter melts and foams, swish it around in the pan a bit until little brown bits start to form on the bottom of the skillet. 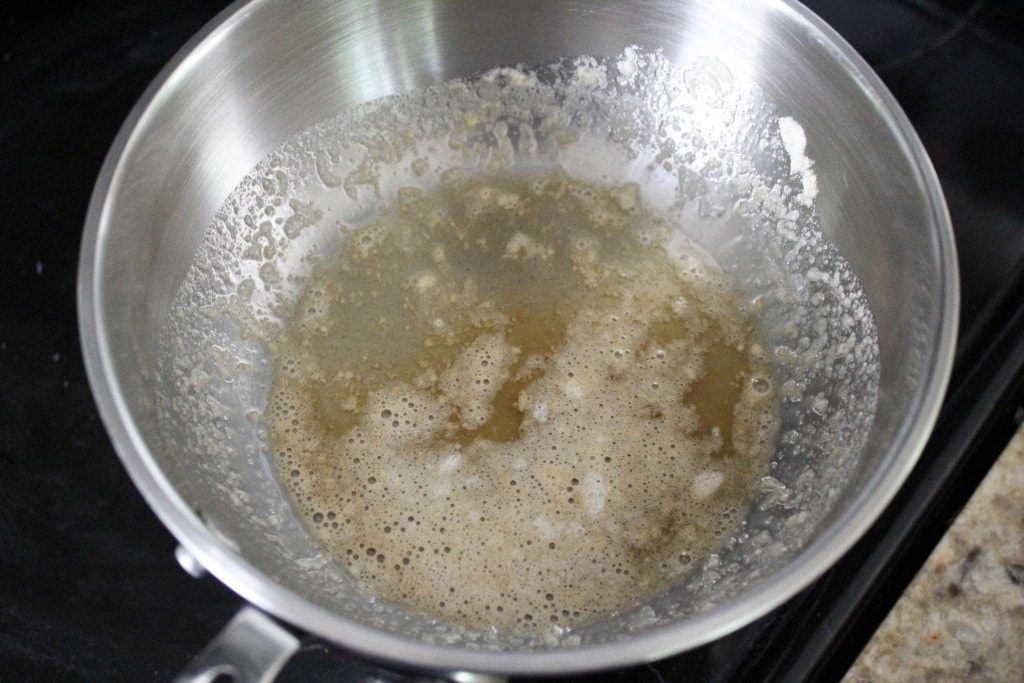 Then, add the edamame. 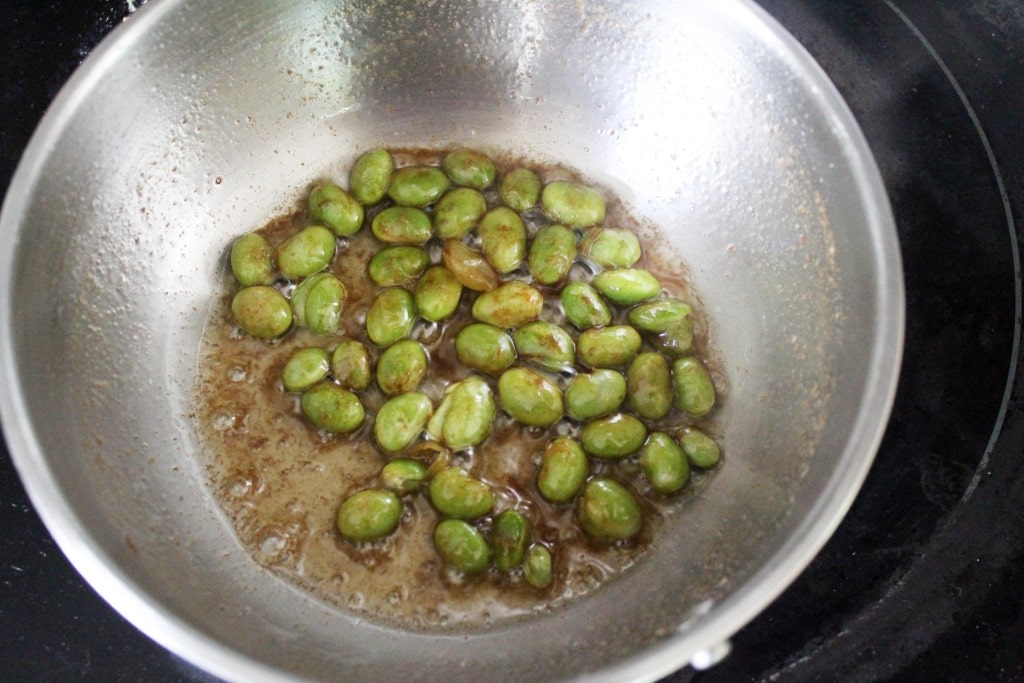 Let the edamame cook in the brown butter for 1 minute or so, then squeeze in the lime juice.  Stir the edamame once more, then turn off the heat. 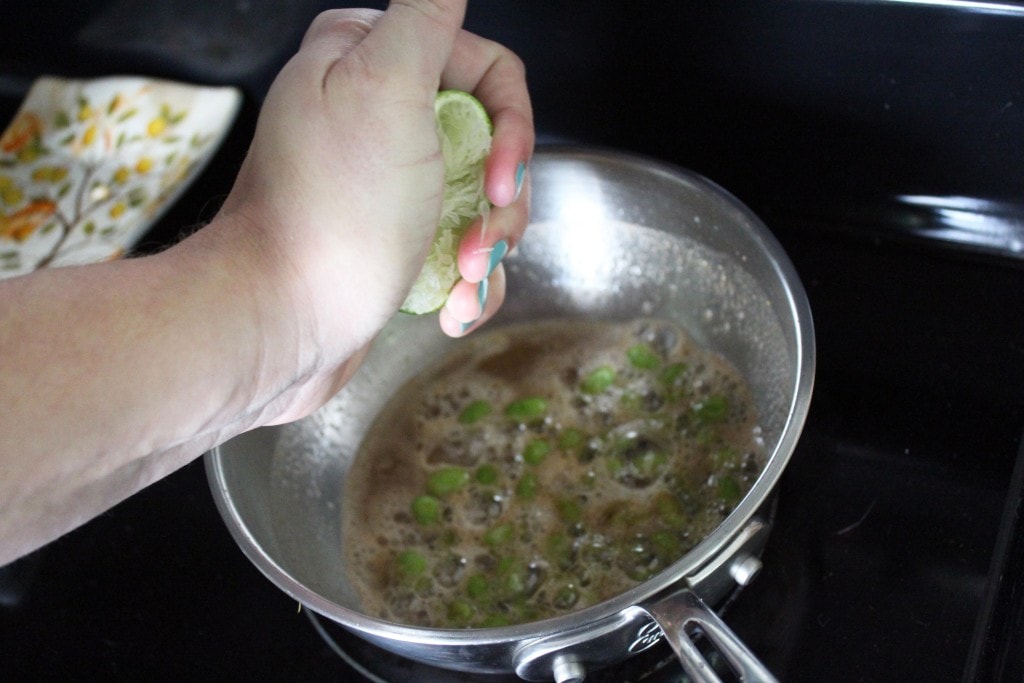 Now, when the pasta has cooked, drain it and rinse it with water so it doesn't get sticky. 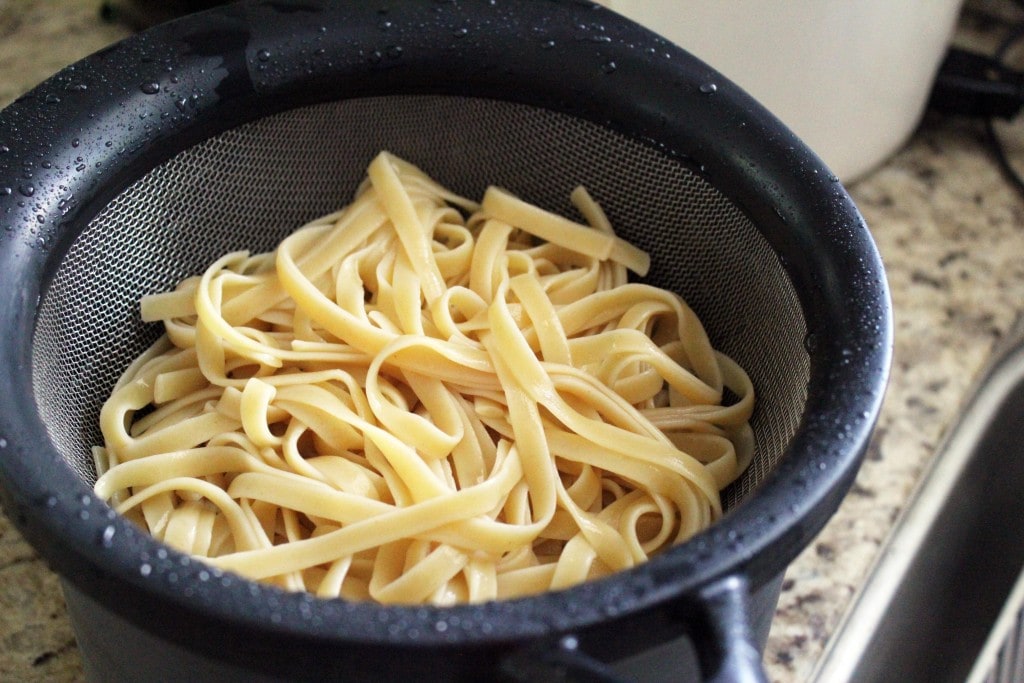 Cut up any of the veggies you need, too. 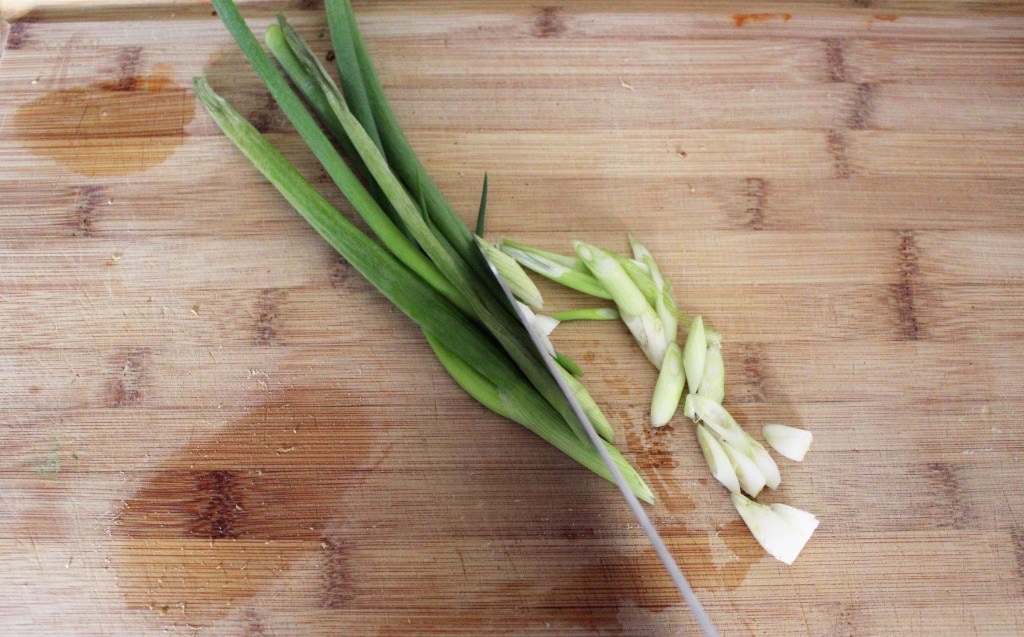 Now, we're all ready to assemble!  Start with the pasta in a bowl, and drizzle it with just a bit of the dressing.  Use tongs to work the dressing into the noodles. 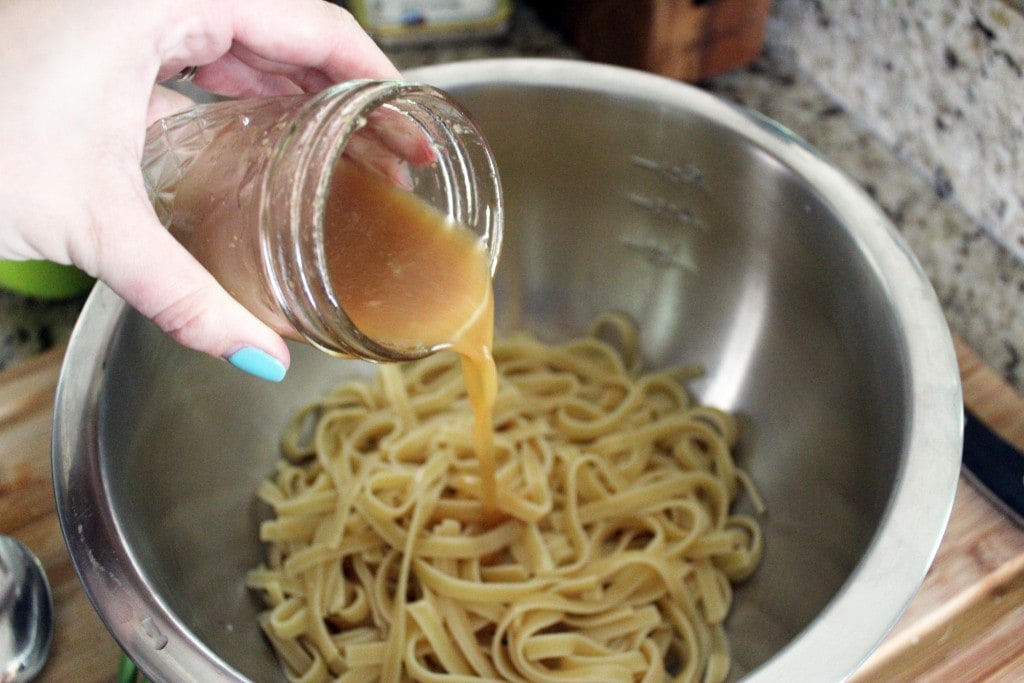 Then, add the scallions, cilantro, and greens to the noodles. 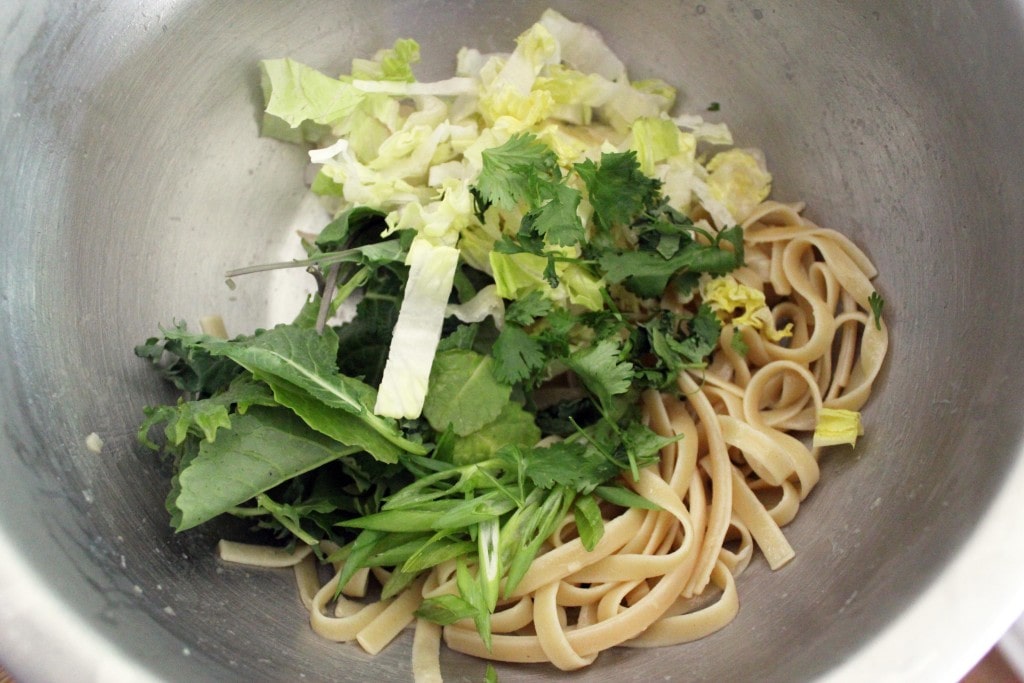 Toss that to combine.  Add a tiny bit more dressing if you'd like, but not too much - the dressing has a strong flavor from the soy and sesame oil, so a little goes a long way! 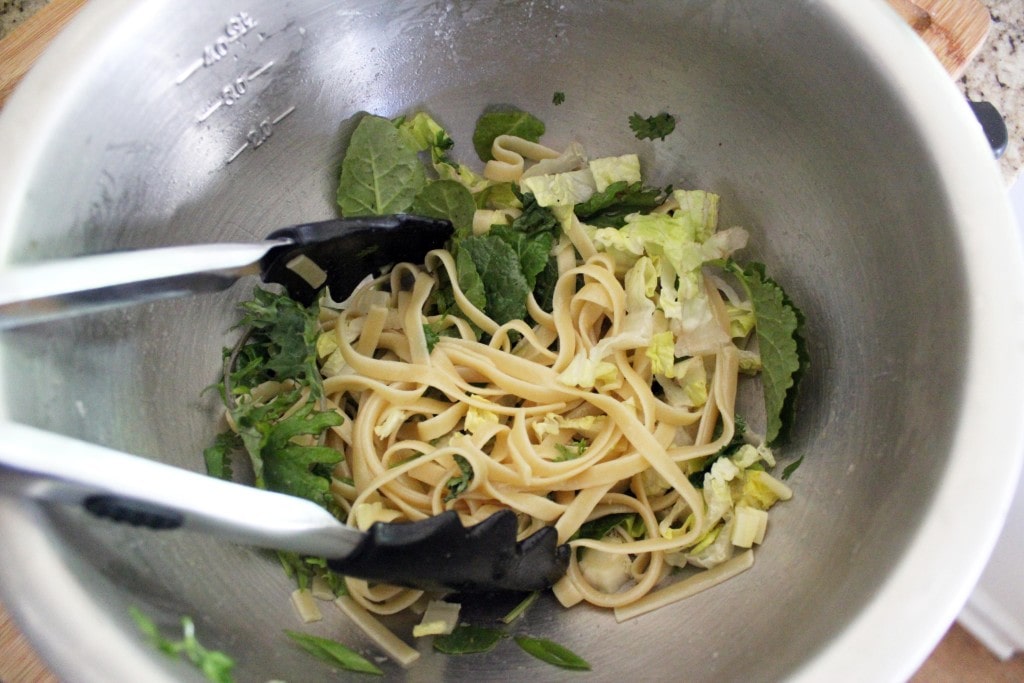 Now, serve this in big bowls topped with the warm, slightly crispy edamame, and SOLD. 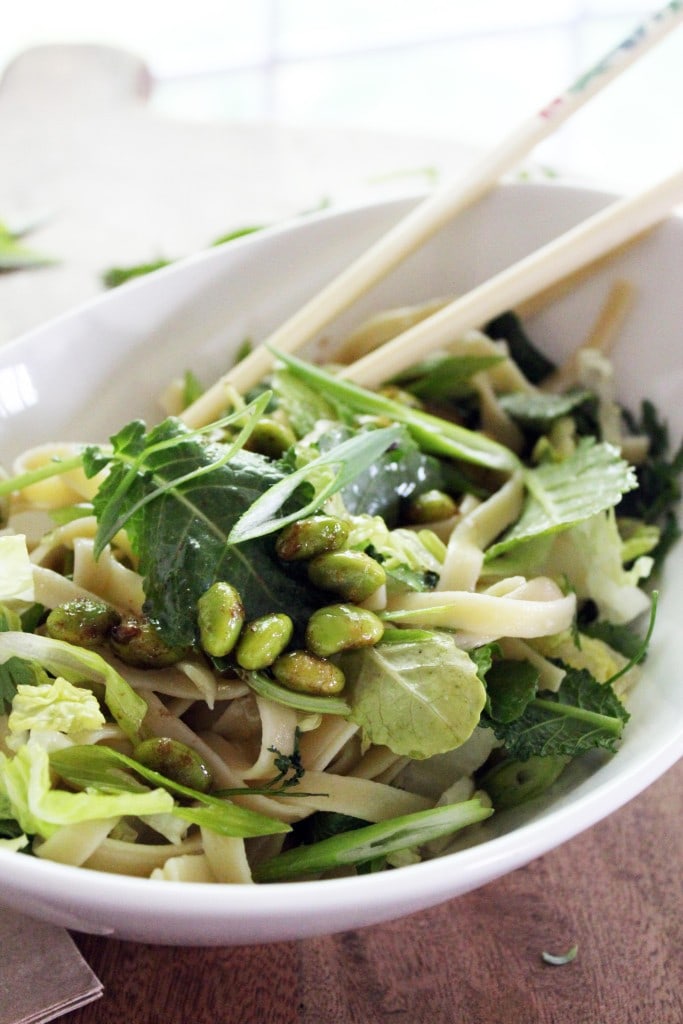 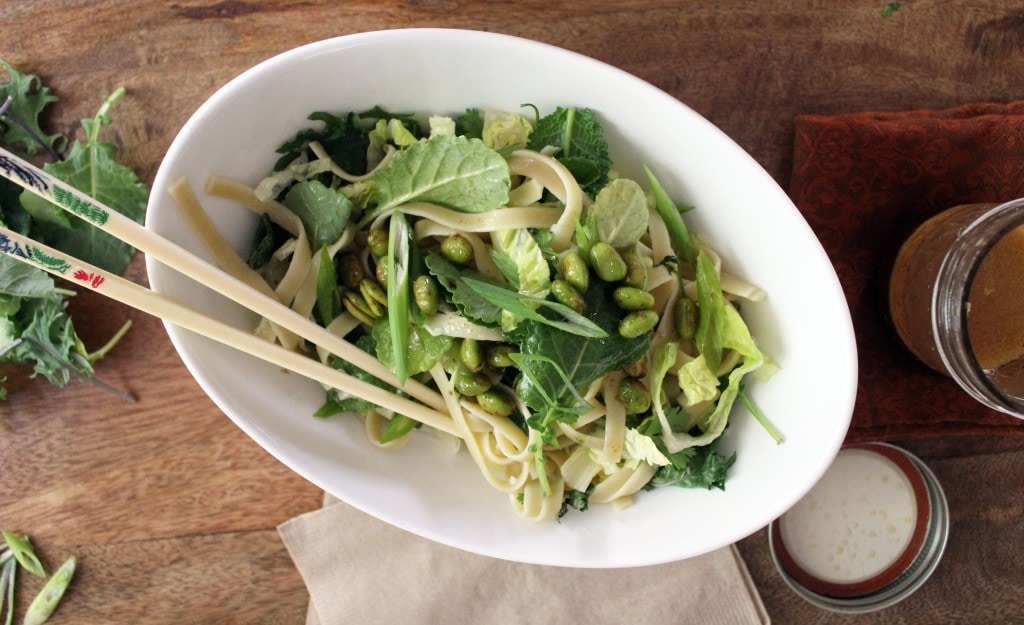