Breakfast for lunch on Tuesday! 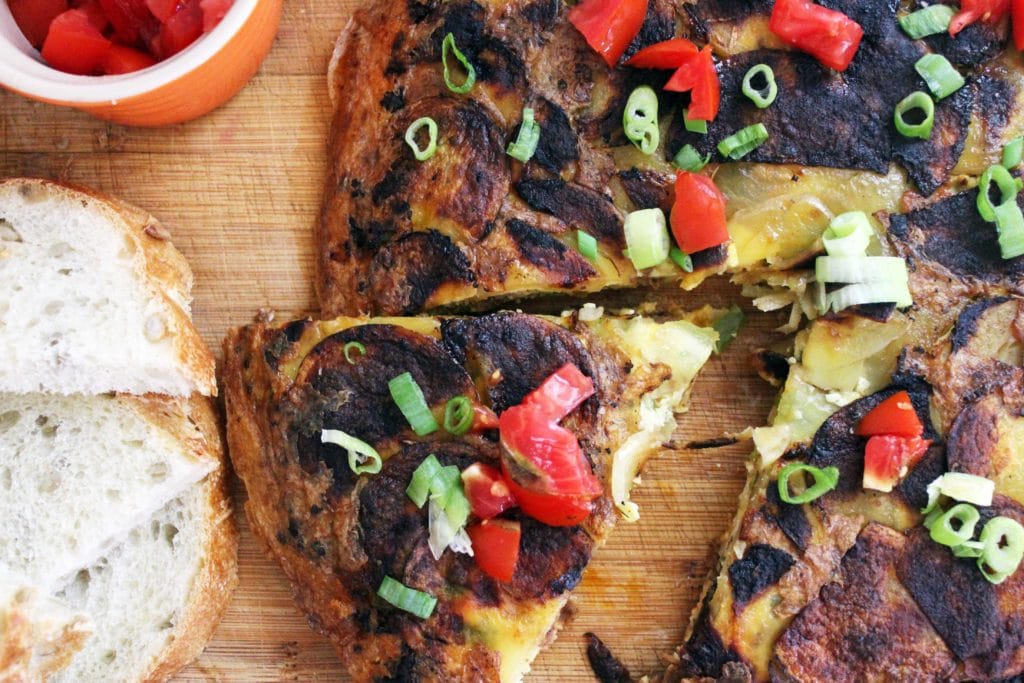 Or dinner, or anytime.  Because chorizo.

We don't eat a ton of big breakfasts, but I made this last weekend; I'd bought some chorizo impulsively and needed something to do with it.  Truthfully, this was more like sausage with a ton of paprika in it, I think I'd classify the flavor as Spanish-style, but this was a raw sausage, not hard cured chorizo that you find on a cheese plate, if that makes sense.  So, use any kind of chorizo you like, but you want it to be raw like sausage.

Then we have crispy potatoes, some veg for our arteries, cheese, eggs....it's perfect, basically.

You'll need some chorizo, potatoes, a bell pepper, onion, garlic, eggs, cheese, smoked paprika, and fresh tomato and green onion for topping - gotta brighten flavors like this up at the end, you know? 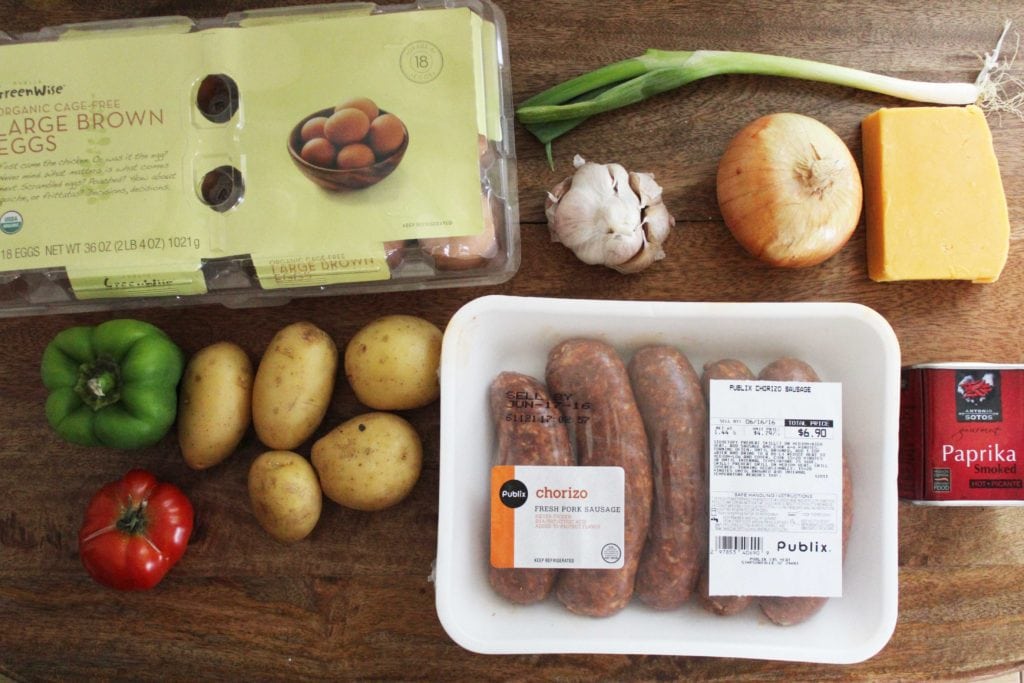 We make the frittata all in one skillet, so it takes a little bit of time, but the end result is that everything tastes like chorizo drippings, which is just NOT a bad problem to have at all, you know?  I cook the sausage and do my chopping while that is happening, but if you're big into prep you can definitely cut up all the veggies in advance!  For me, though, it's chorizo first.  Stick it in a skillet!  Nonstick is best for this if you have one so the frittata will slide out easily at the end. 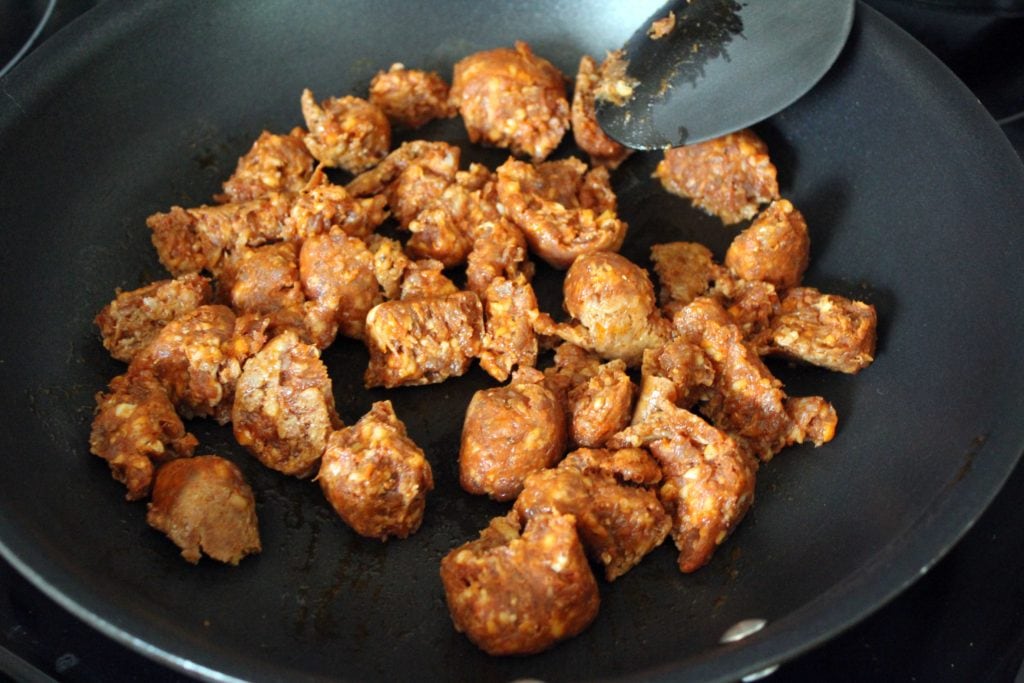 Turn the heat to medium-high and let the chorizo cook until it's crumbly and brown.  Use a spoon as you go to break it up into little bits. 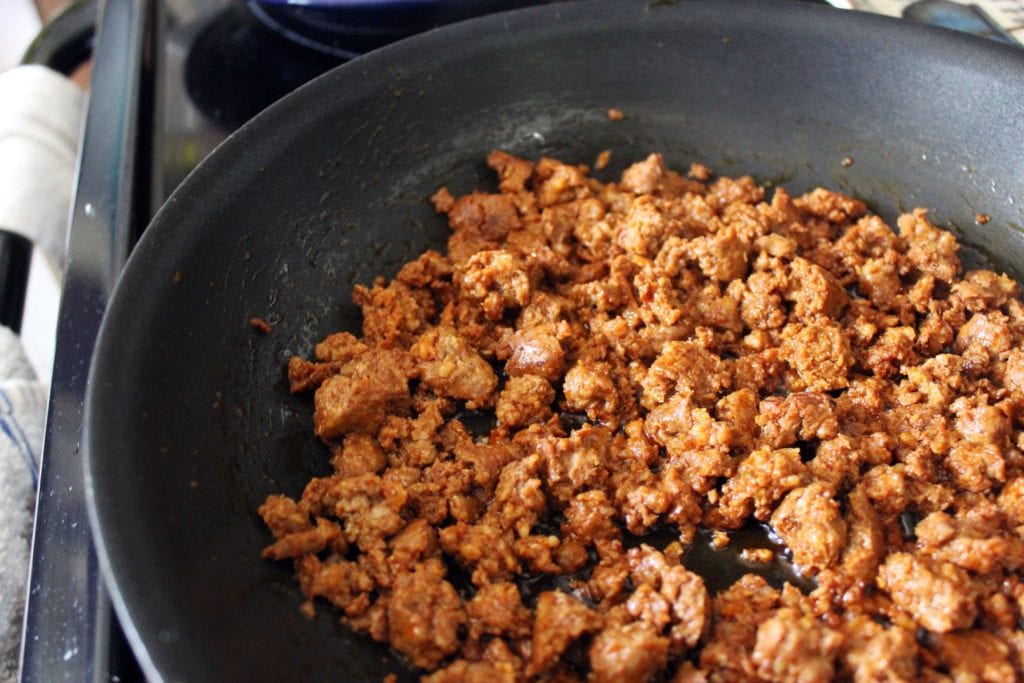 While the chorizo is working, dice the bell pepper and onion and mince the garlic. 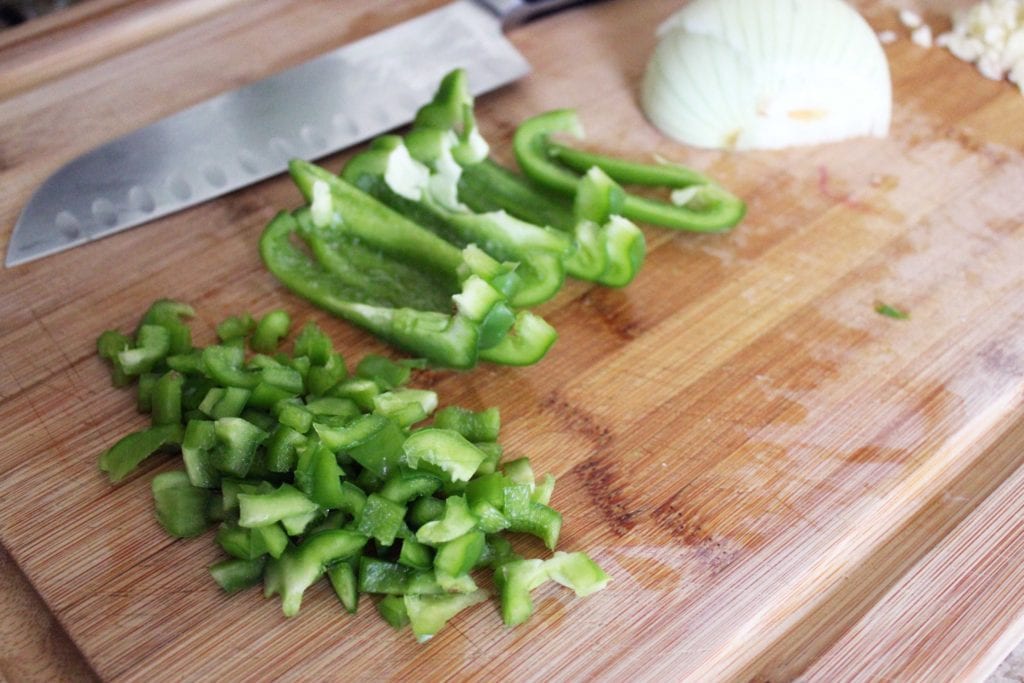 Chorizo: done!  Take the chorizo out of the skillet and add the veggies, smoked paprika, and a sprinkle of salt.  Cook the veggies for about 7 minutes, stirring as you go, until they're nice and soft. 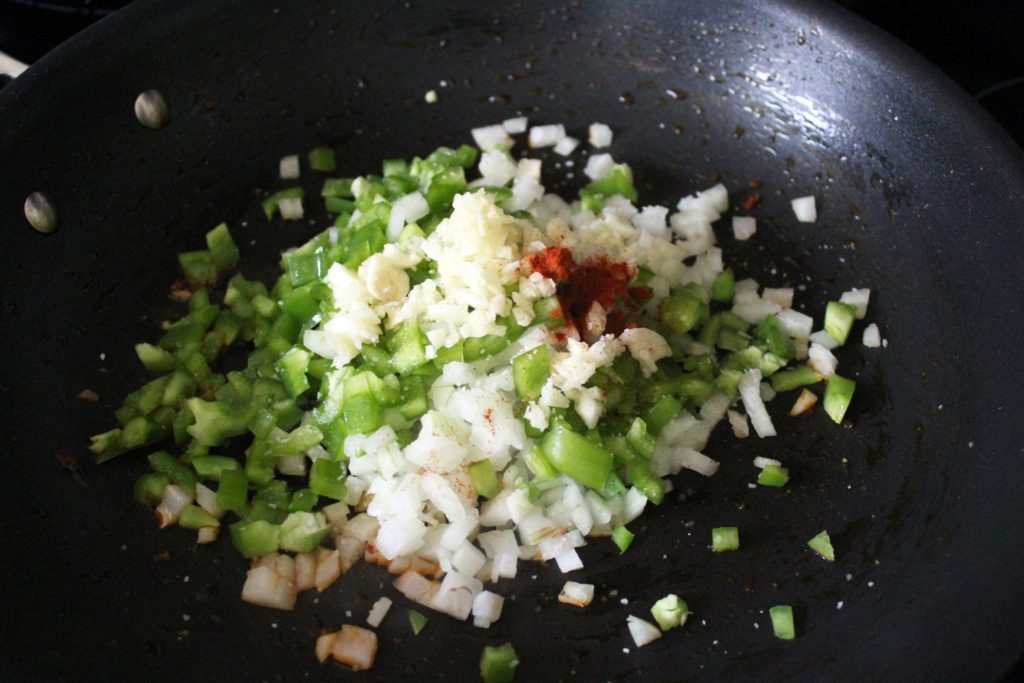 While the veggies are working, slice the potatoes!  You can use a mandoline for this or a knife - just get them as thin as you can. 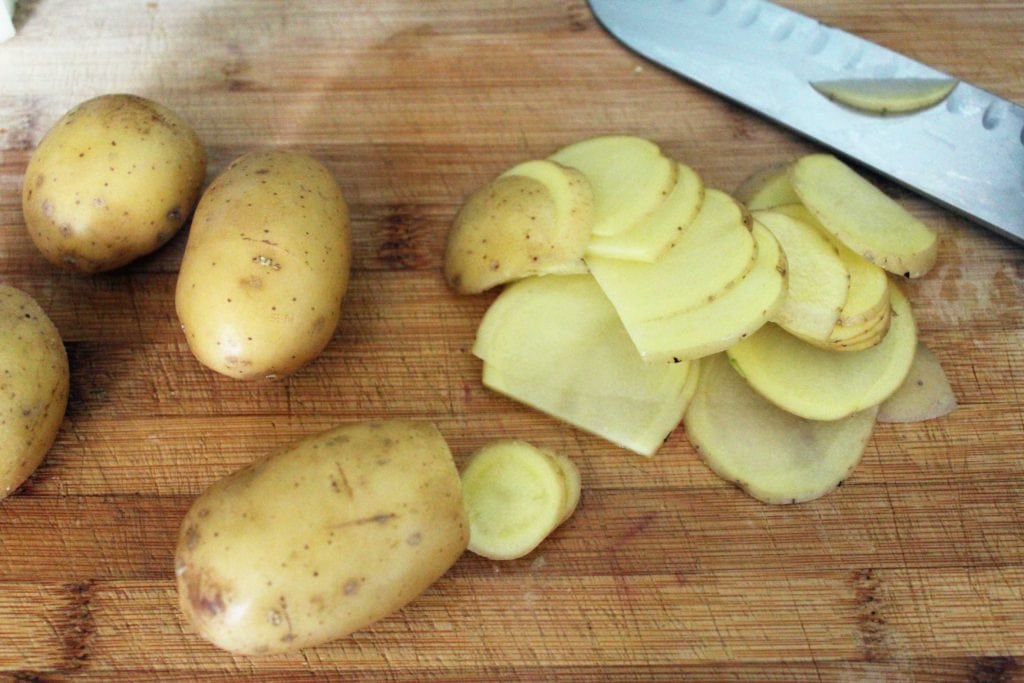 When the veggies are soft, take THEM out of the skillet too. 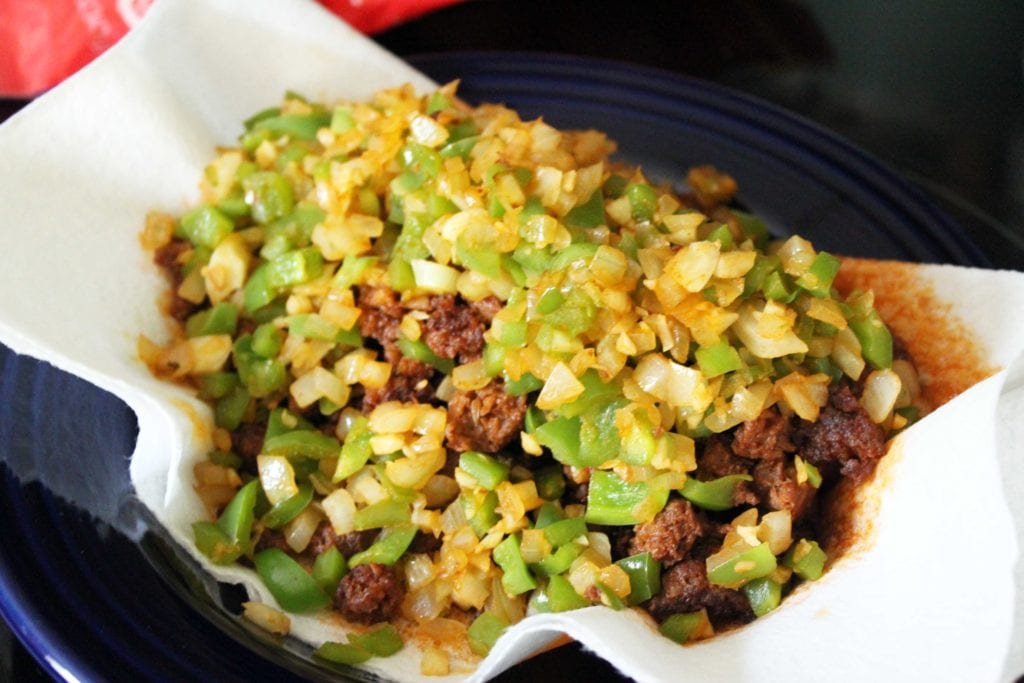 Then, drizzle some olive oil in the skillet (heat is still medium or medium-high), and arrange the potatoes in a single layer, overlapping just a little bit, all over the bottom of the skillet. 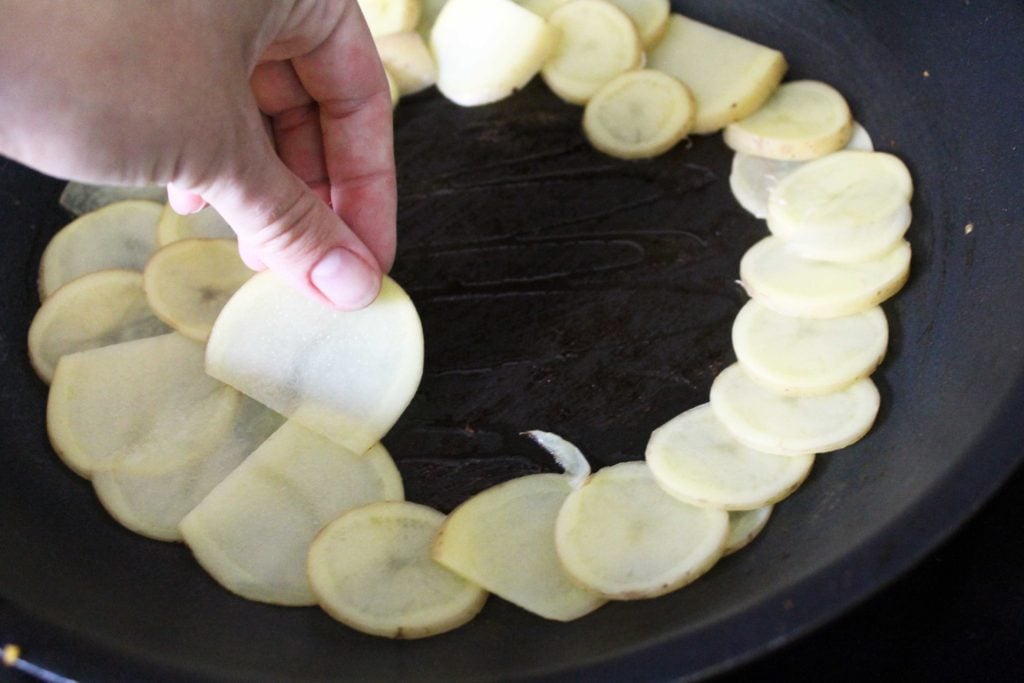 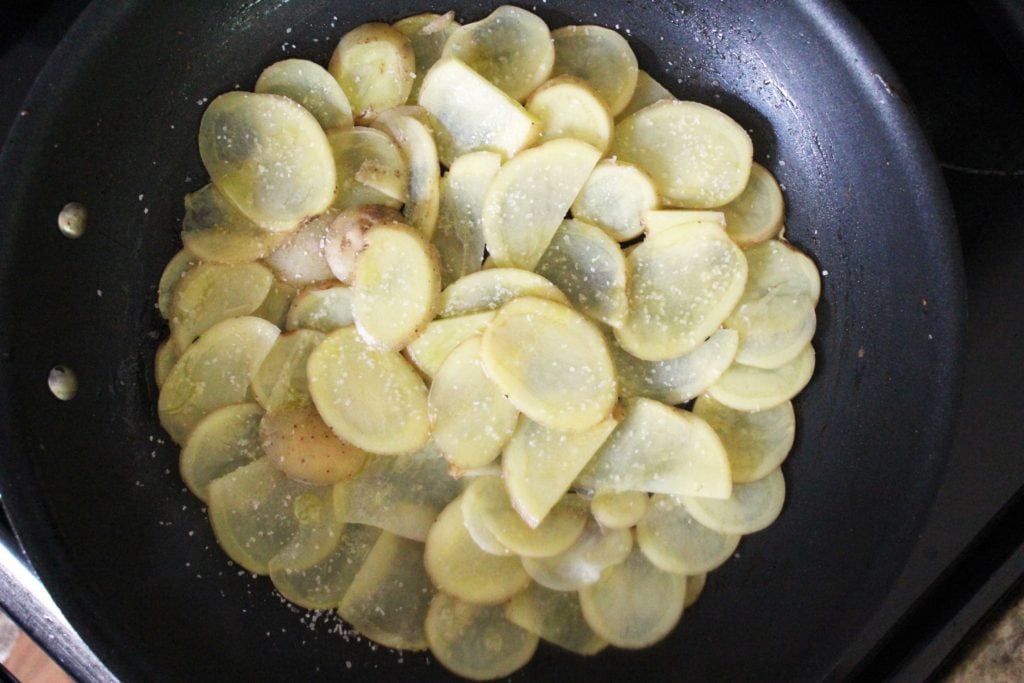 Ok, the potatoes will start to get crispy, let them just sit and work.  Turn the heat on your oven to 400F, and crack the eggs in a bowl.  Sprinkle over salt and pepper, and whisk them up! 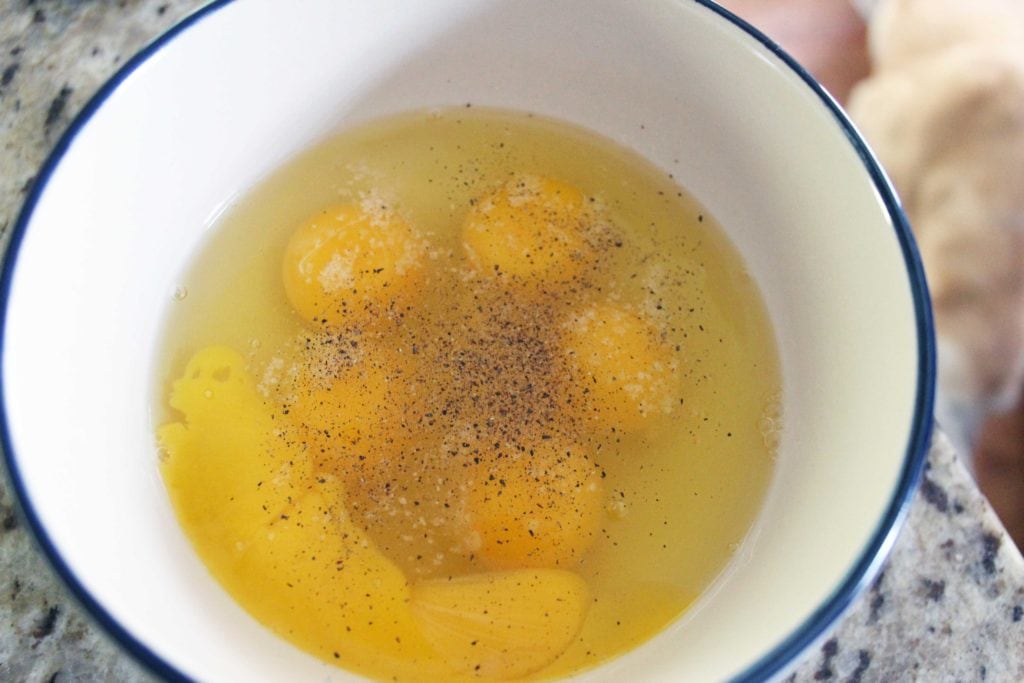 Grate the cheese, too. 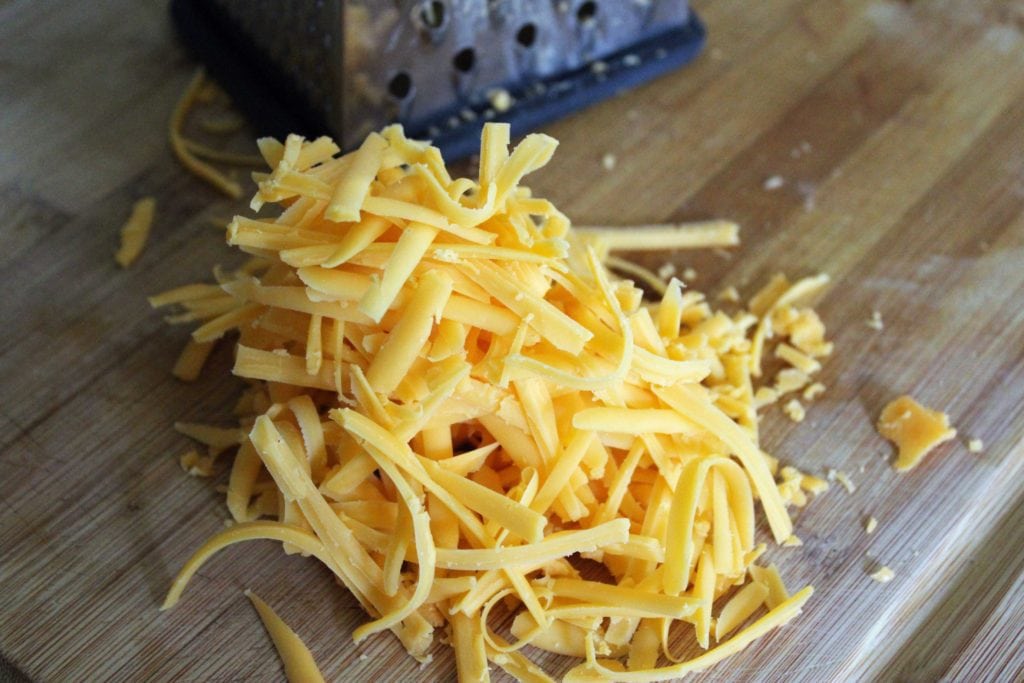 Now, turn the heat OFF the skillet, and add the rest of the ingredients right on top of the potato mixture.  Chorizo, veggies, cheese. 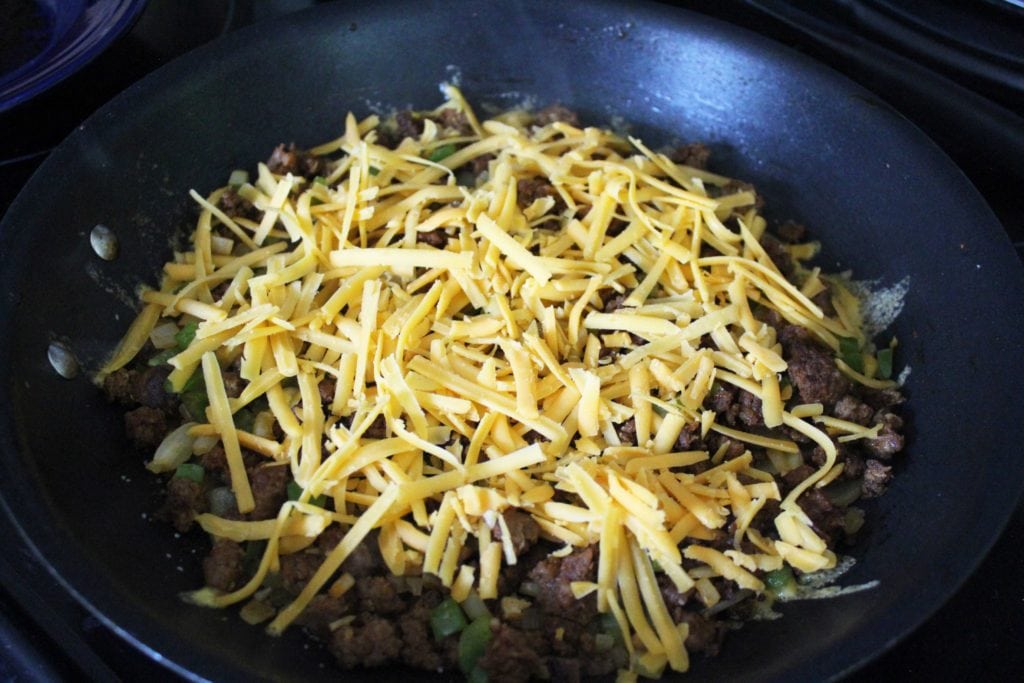 Pour the egg mixture everything - it should come right to the top of the cheese layer.  Shake the skillet if you need to to even everything out. 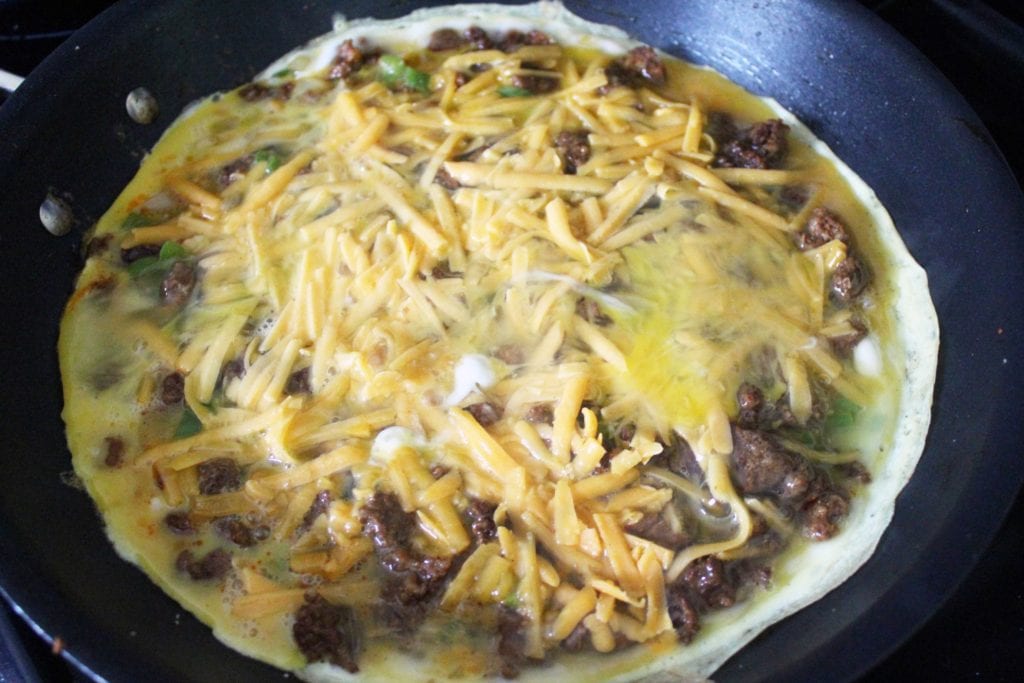 Now, just bake the frittata for 20-30 minutes until the egg is set and the top is puffy and golden.  While that's happening chop the scallion and tomato for topping. 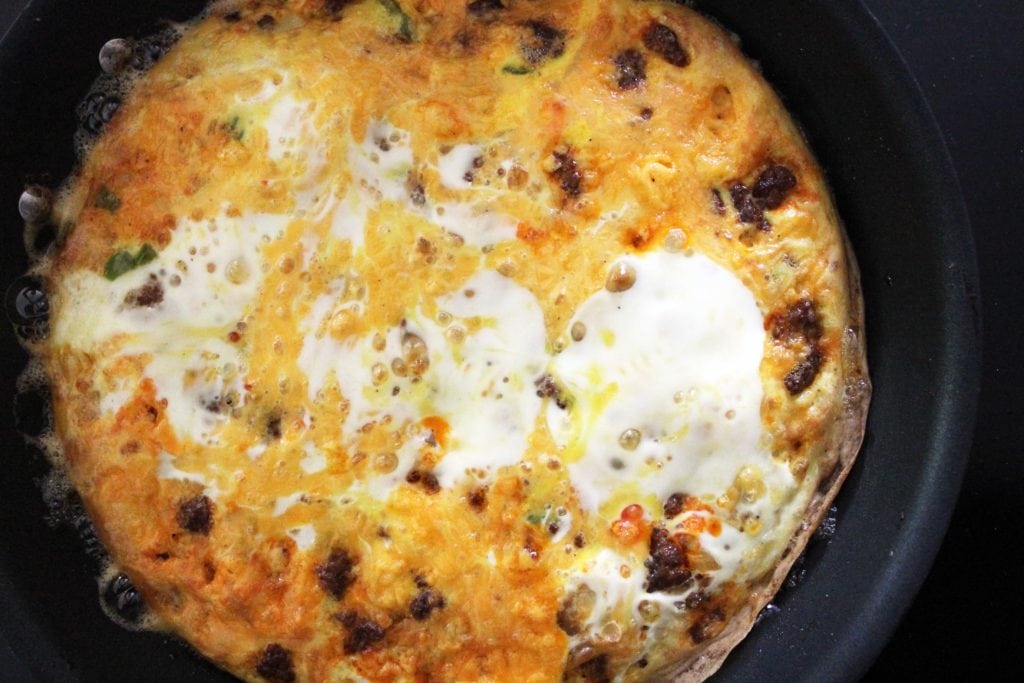 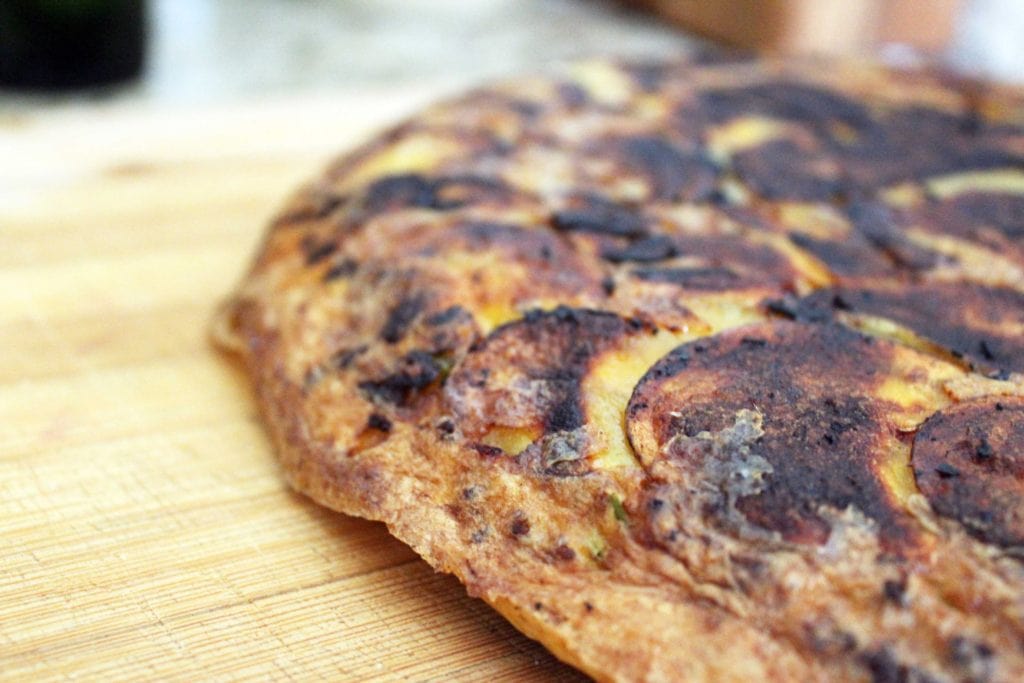 Now, I like to serve this upside down with the potato layer on top.  To do that, I put a big plate or cutting board on top of the skillet, then flip the whole mess over.  You can just as easily serve this straight from the skillet (but be careful not to wreck your pan), or egg-side up.  I just like the look of the crispy potatoes on the edge of everything. 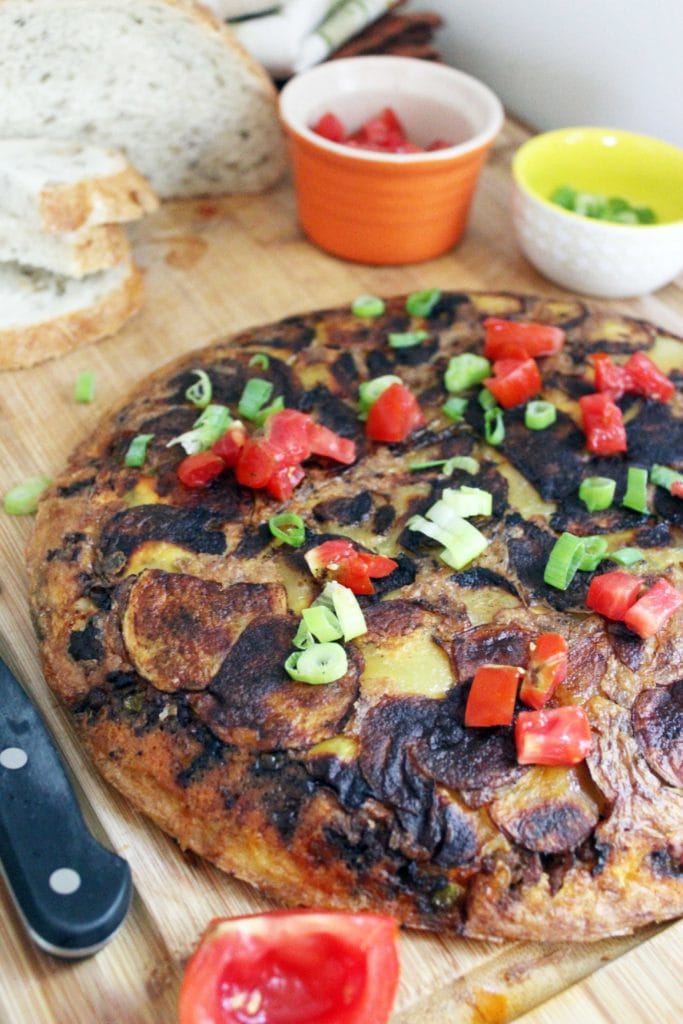 Breakfast, lunch, or dinner, there is no wrong way to make this.  The flavors are huge, there is some nutrition hidden under the pork and cheese, and this is just so easy to make. 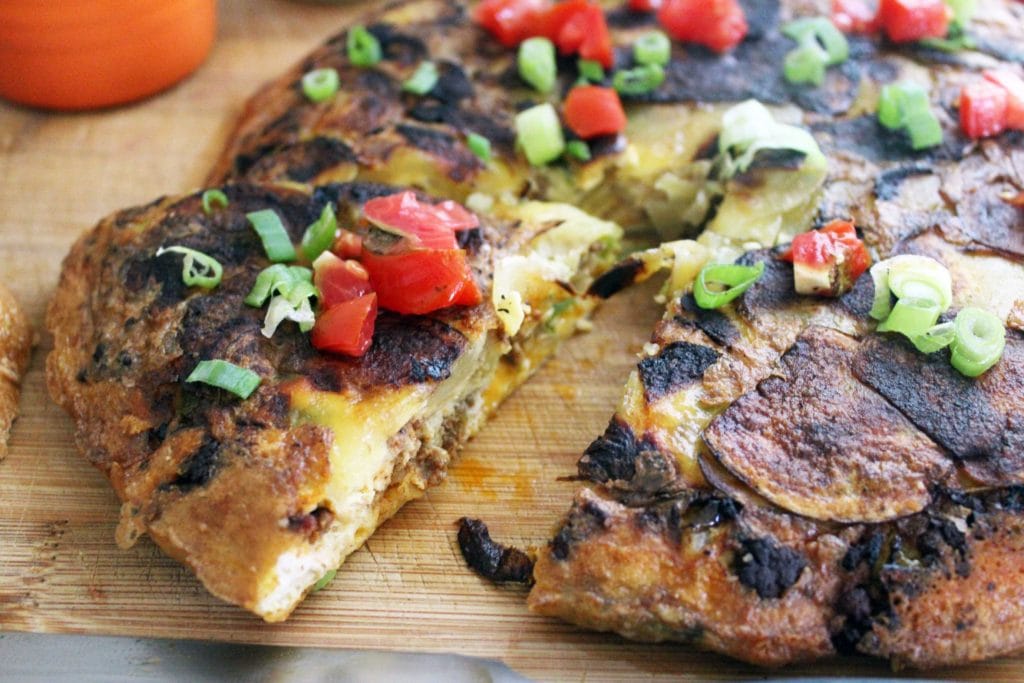 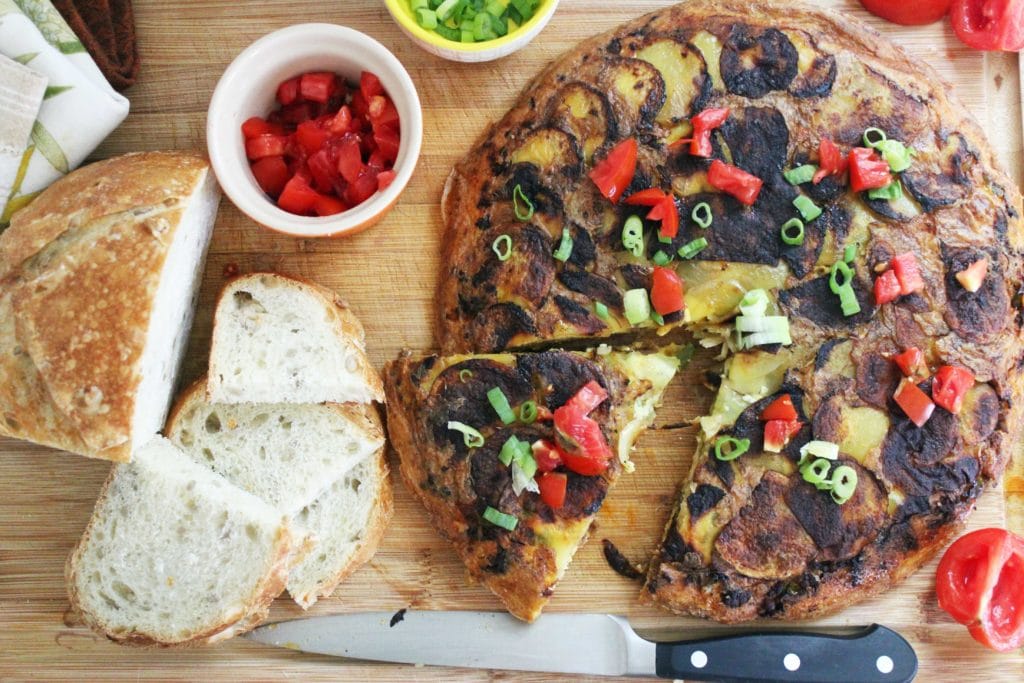