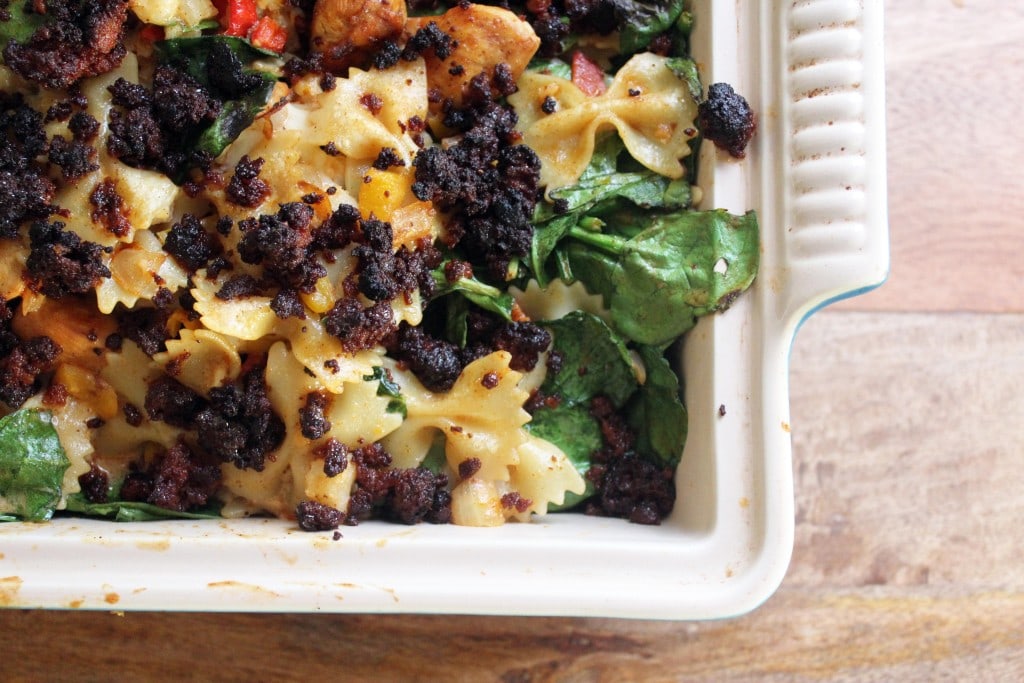 Because you never use one can of chipotle all at once.  Your mouth would burn forever.

So, I'm working on this can of chipotle peppers that I opened for the sweet potatoes a few weeks ago, and I wanted a main dish that was all smoky and sexy but also could be made ahead for, say, a Wednesday.  Also, it contains meat and I have leftovers, so MEAT EATERS COME OVER.  Seriously. 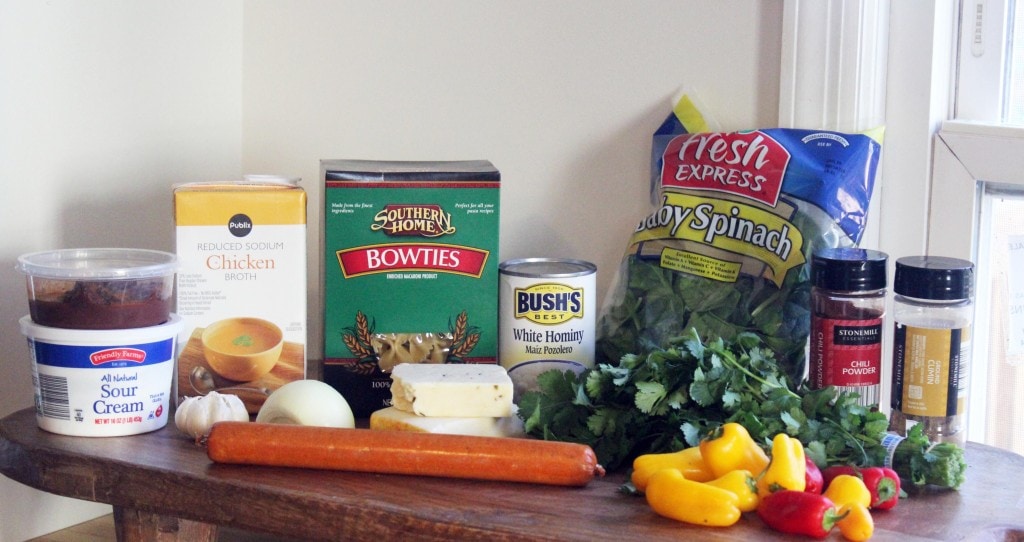 You also need chicken, which was sitting directly behind me when I took the first picture. 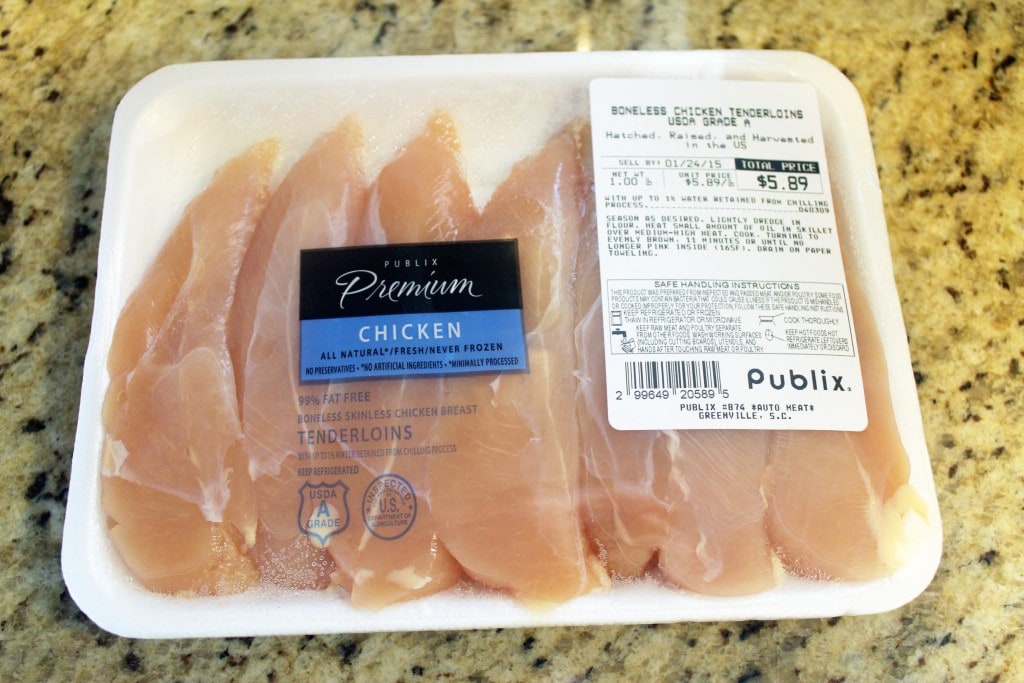 So here's what I do:  I cook the pasta in one pot while I start the chorizo and chicken in another skillet.  Then when the pasta is DONE I drain it and use the same pot for the veggies and eventually combine everything altogether in the original pasta pot.  You can figure out any other kind of pot/pan merry-go-round you like, though.

So we start the pasta, and add the chorizo to a large skillet over medium-high heat.

While the chorizo cooks, cube the chicken - it goes in next. 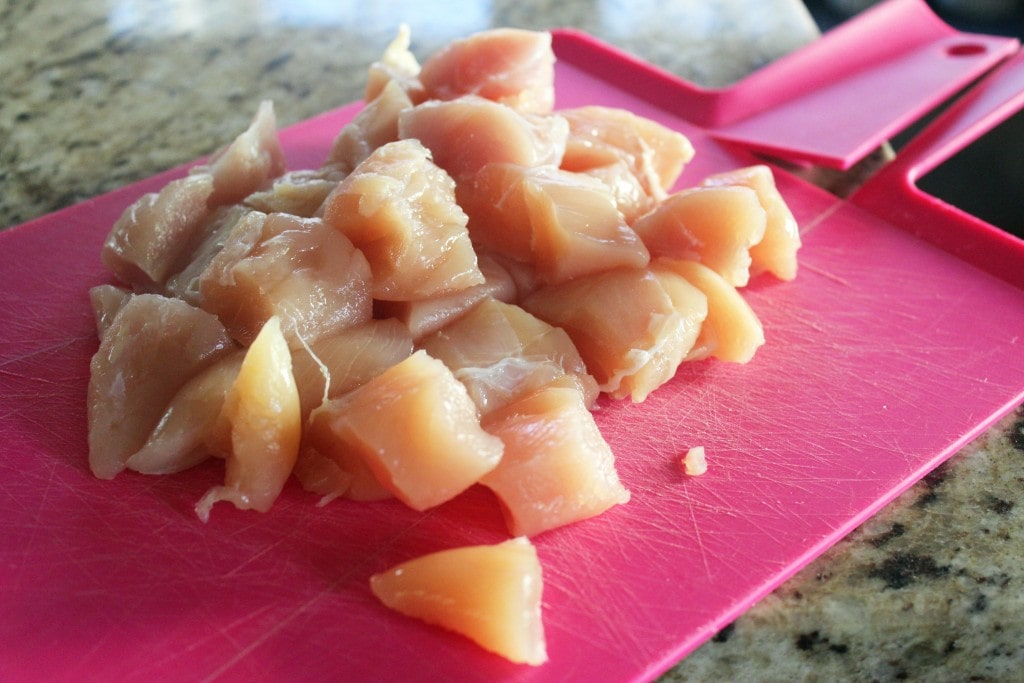 Break the chorizo up with a spoon as it cooks and browns. 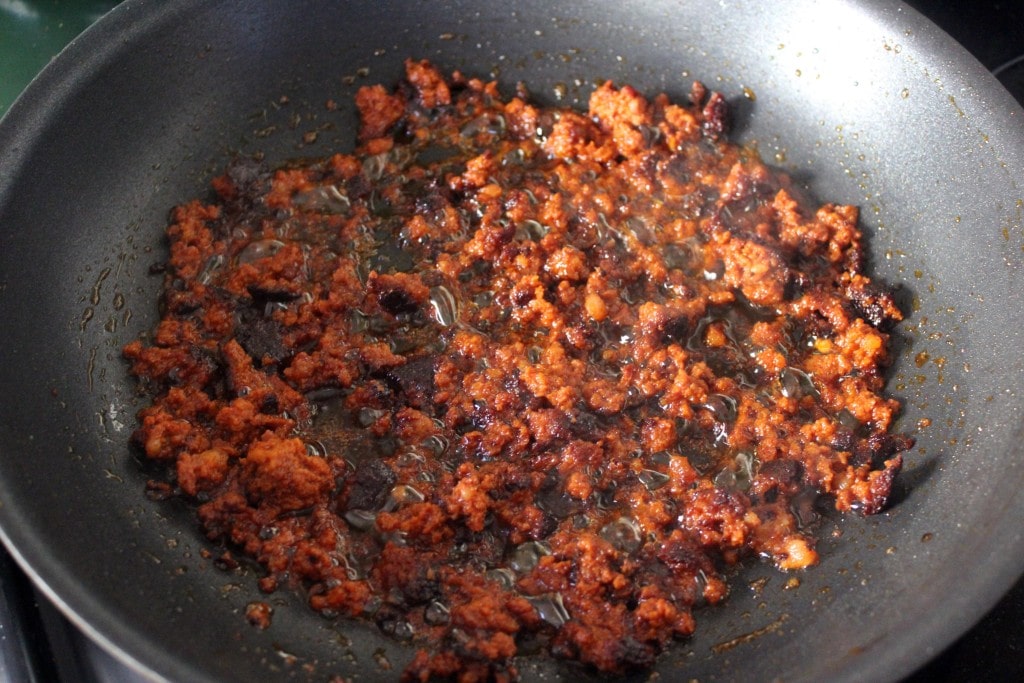 When it's cooked through, remove it to a plate to hang out. 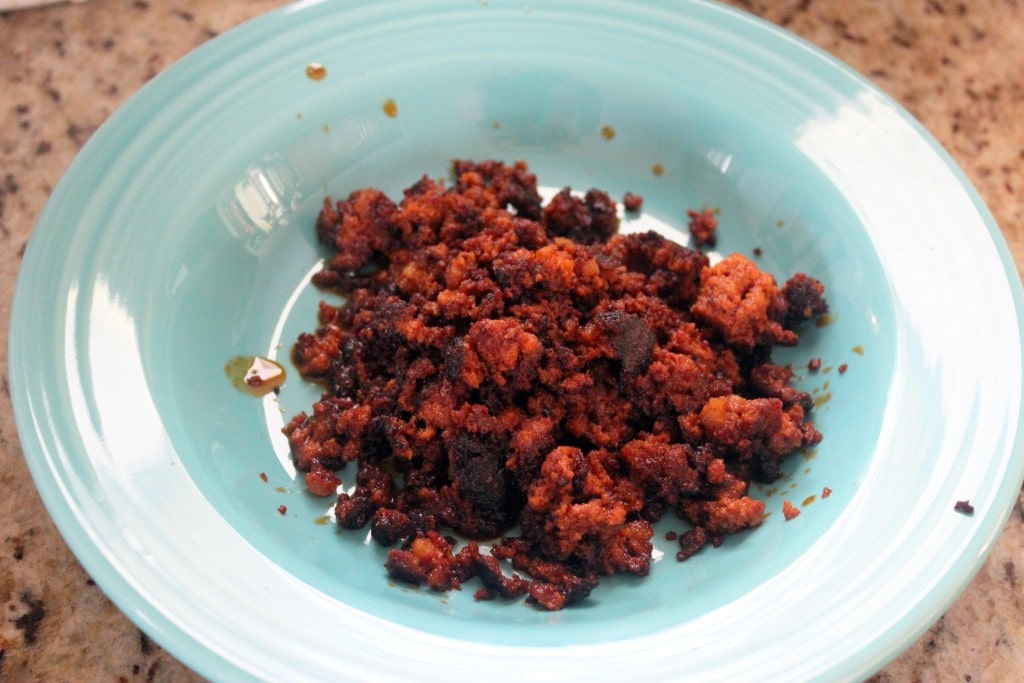 Add the cubed chicken to the same skillet with the cumin and chili powder and all the chorizo drippings.  Flavor! 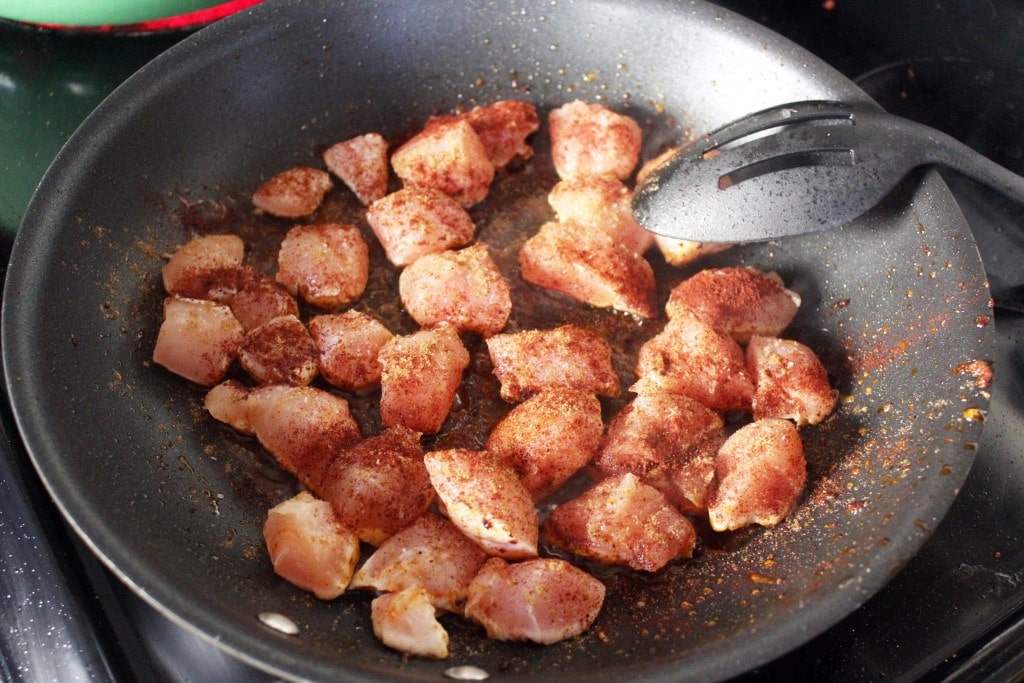 Now, we've got chicken and pasta cooking at this point.  Dice the onion... 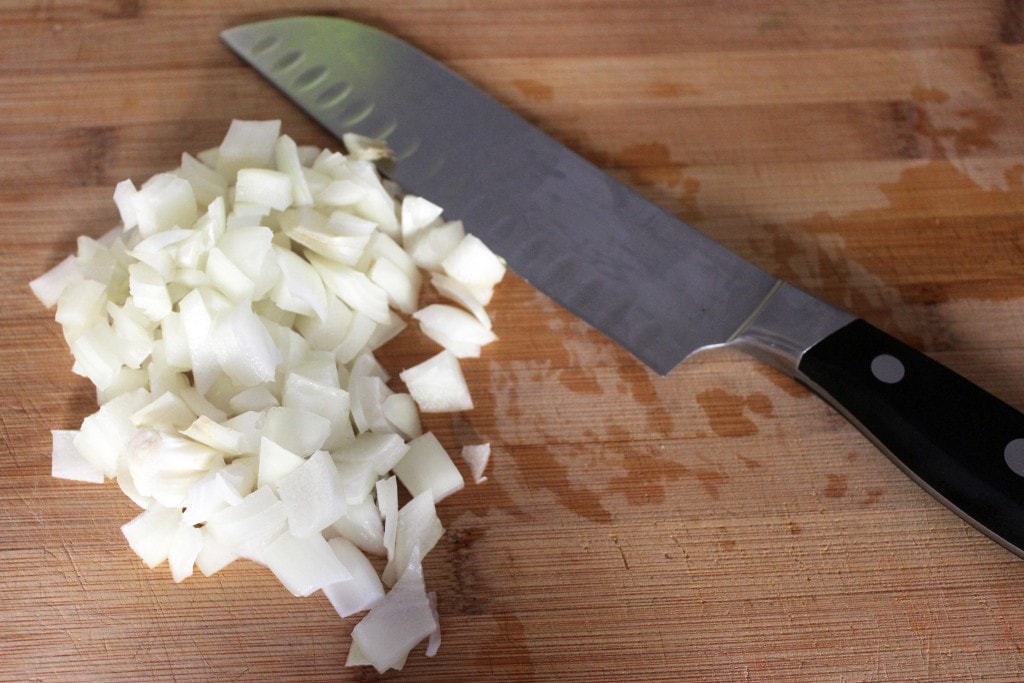 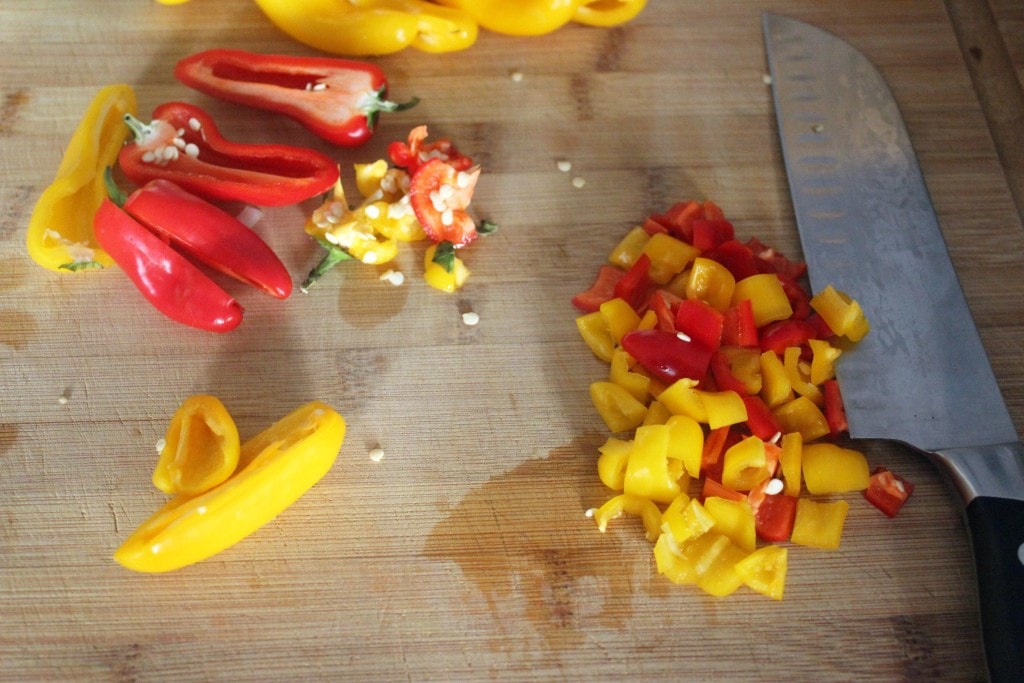 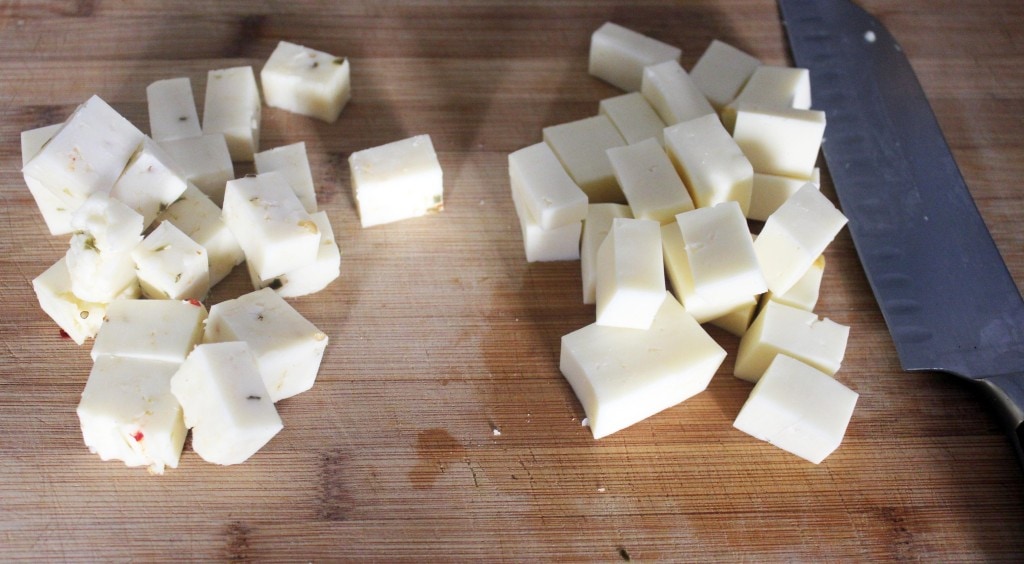 ....and mince the garlic.  This could of course all be done well in advance if you like doing things a bit more slowly.  Cooking is sometimes more fun with all the prep work done in advance! 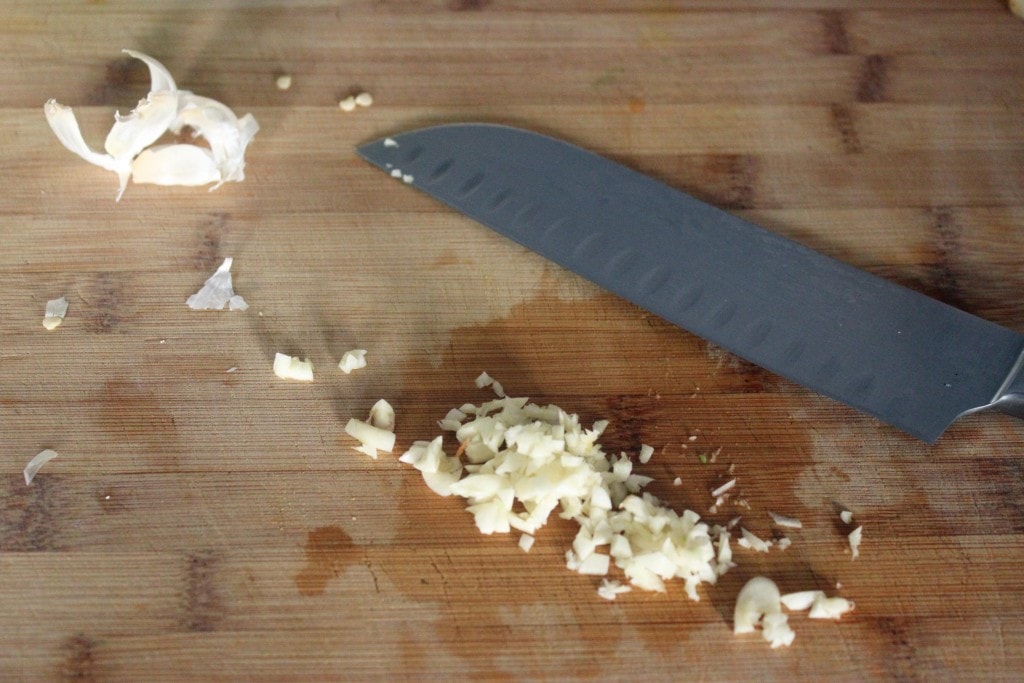 When the chicken is done, after about 7 minutes, remove it from the skillet as well.  When the PASTA is done, add a drizzle of oil to the pot and add the onions...

...then the peppers and the garlic. 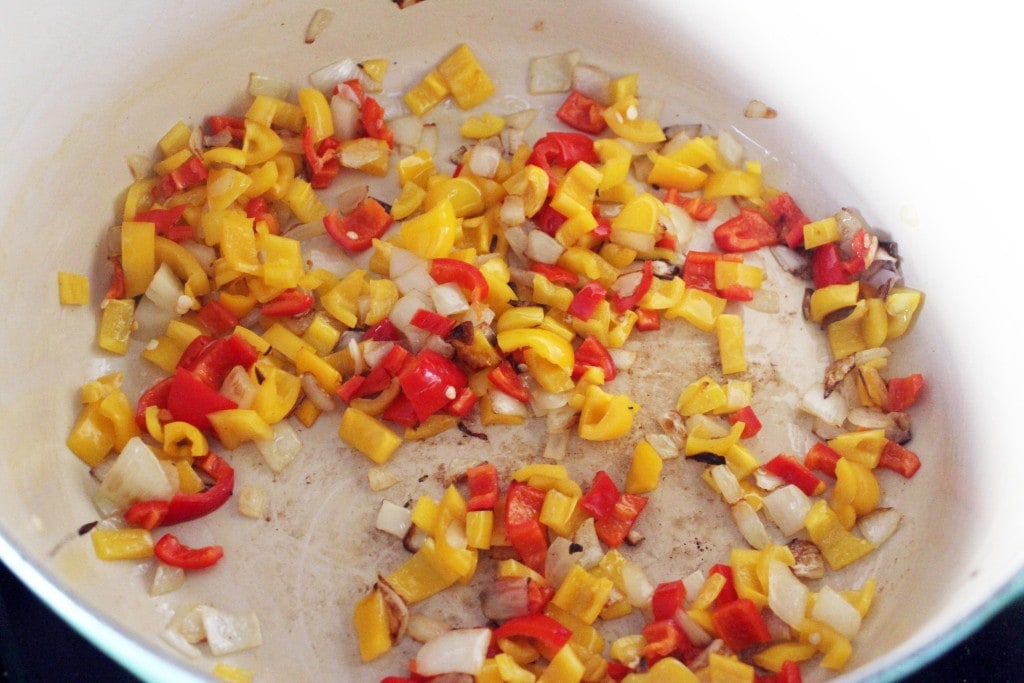 Let the veggies work for just another minute or so more, then add the hominy, drained, to the pot. 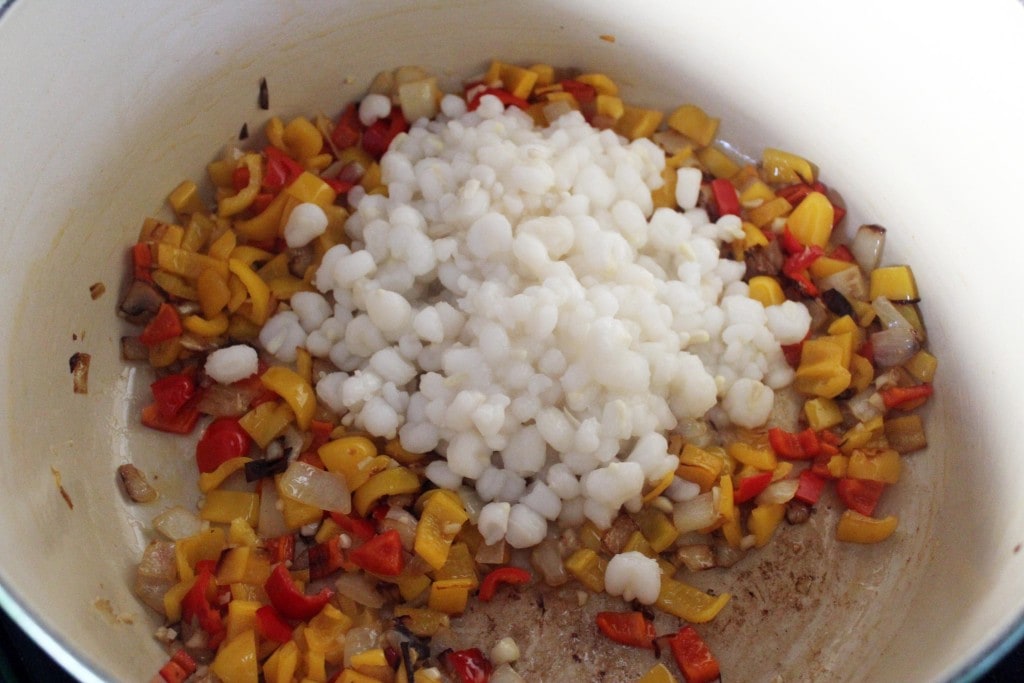 And now it all goes kind of fast!  Turn the heat off the pot.  Pasta, chipotle, sour cream, and stock get thrown in. 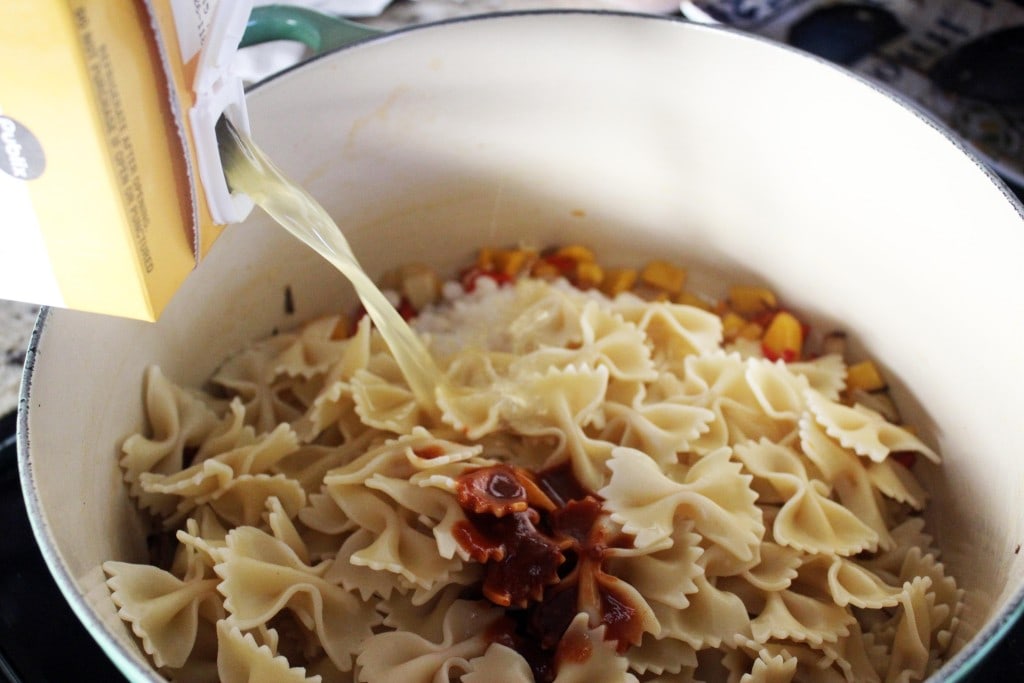 And then we add the cheese... 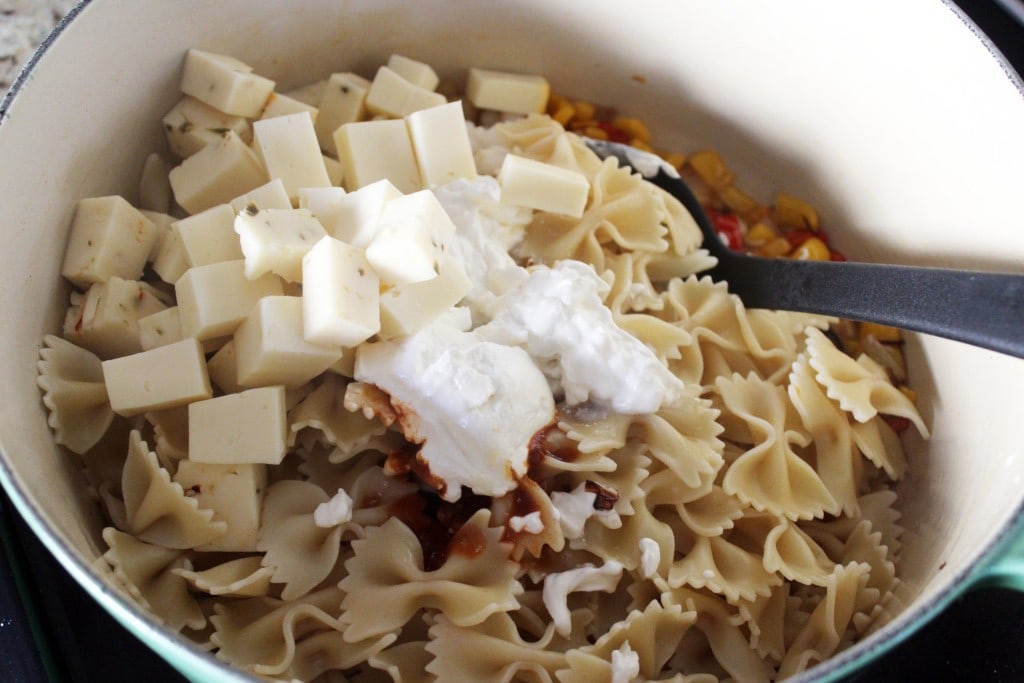 ...and the chicken and spinach! 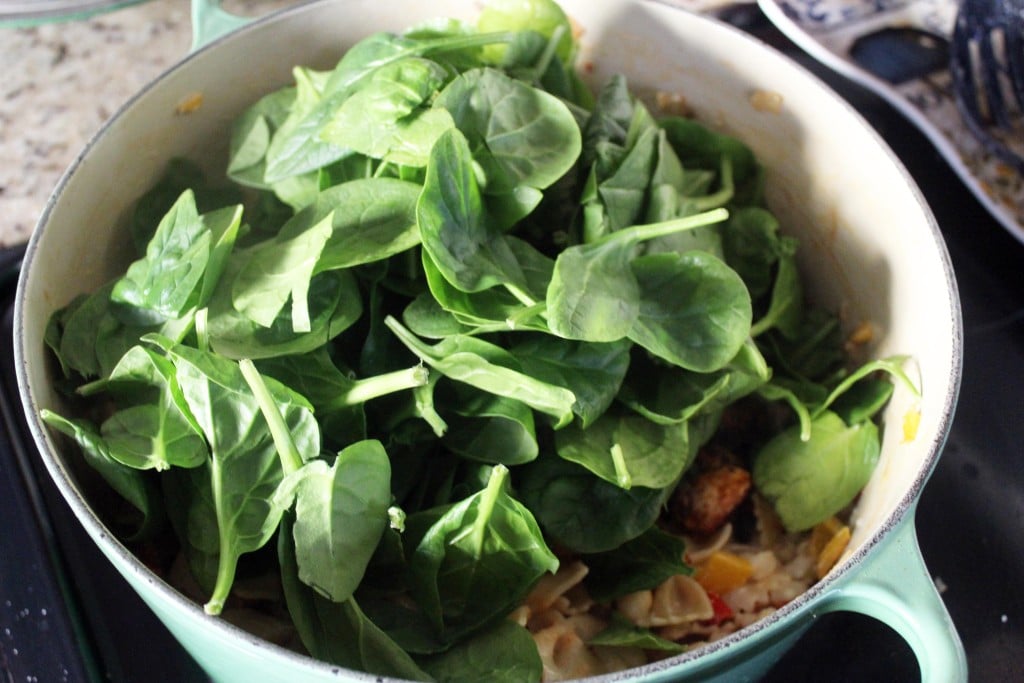 Now, stir everything together and taste.  Add salt and pepper if you'd like, or some more stock to create a little bit more of a sauce. 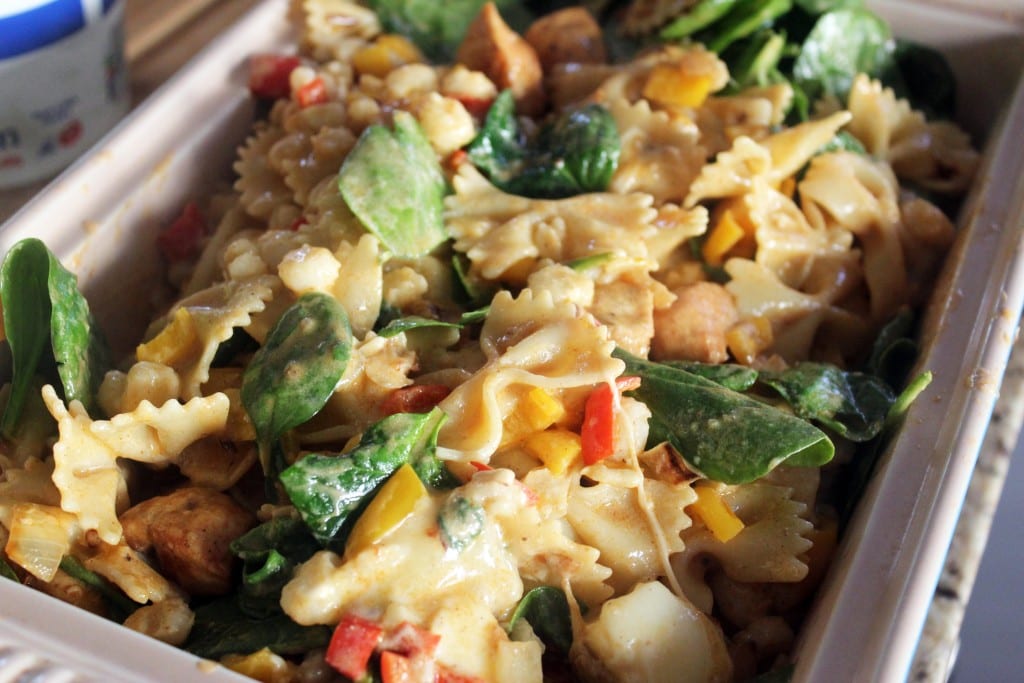 Pour the whole thing into a baking dish, top with the chorizo, and bake or broil until everything is hot and bubbly and sexy. 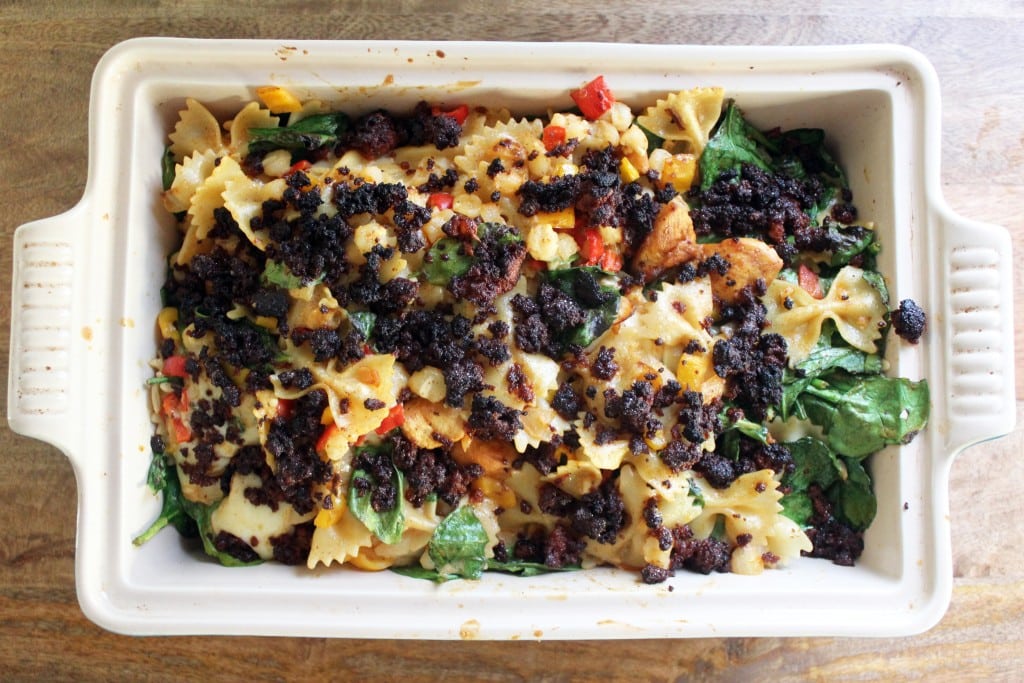 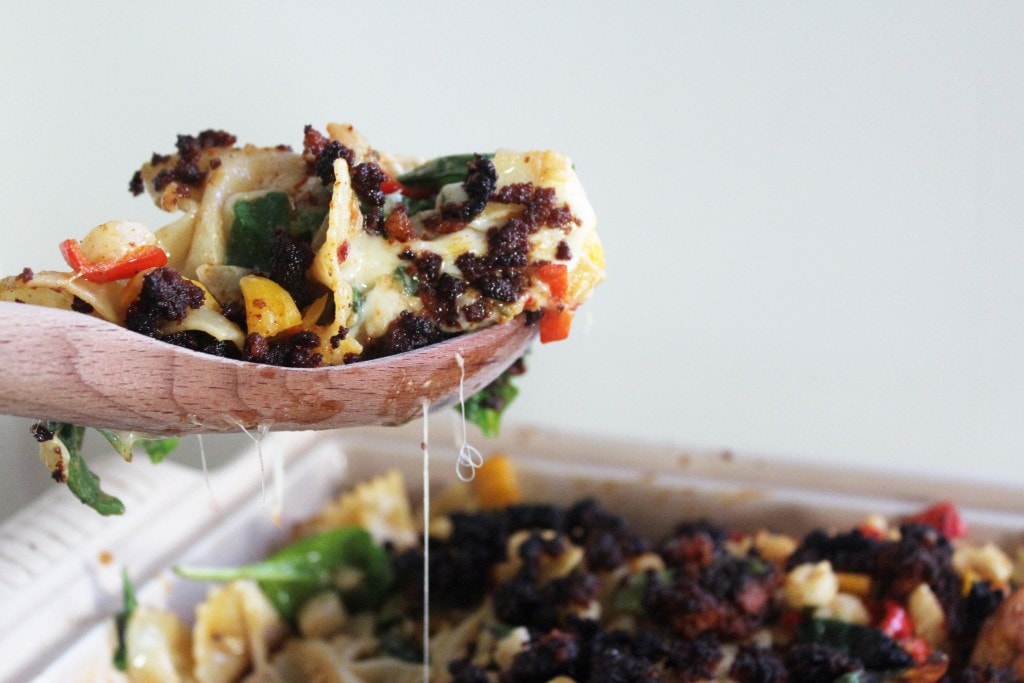 I mean, seriously children.  You garnish with some cilantro leaves and lime wedges, and go. to. town. 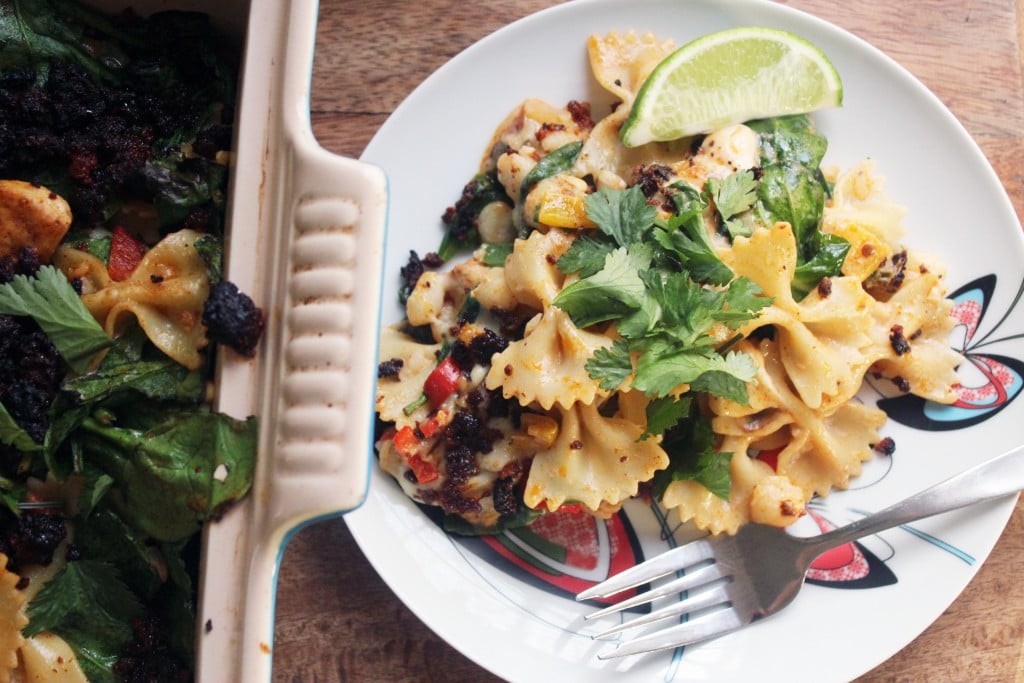 This is really delicious, has great flavor, and you could totes make this a few days in advance and just bake it when you're ready to eat.   Try it soon!  The texture of the hominy is killlllller good.