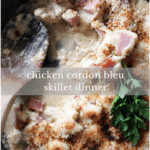 I realize I've been a little heavy-handed recently with the cast iron skillet use.  One the one hand, I'm sorry I'm not more creative.  On the other hand, it's so convenient and also looks nice in pictures, so let's just not worry about fixing what's not broken, ok?

Ok!  I'm glad we had that talk and also thank you for being here.  This casserole!  Is kind of like a deconstructed cordon bleu (do we capitalize this?  hmm), super simple to throw together, and big on flavor.  The big deal with regular chicken cordon bleu is that you roll chicken and ham and cheese together into this nice little packet, then bread and fry it.  Time consuming + unhealthy SO we eliminated the assembly and the frying.  There's still a breadcrumb topping because I'm not an animal.

The skillet is layered super quickly, baked until bubbly, and served with rice and pasta and bread, all 3.  Or salad depending on your mood.

You need!  Chicken, any kind, boneless/skinless, cut into chunks.  Chunks of ham too - I get thick-sliced sweet ham at the deli counter.  Then it's garlic, butter, flour, and mustard as the base for the sauce, milk and Worcestershire sauce, Swiss cheese, and breadcrumbs.  Maybe some pepper, but the cheese and ham satisfy any need for salt here.

First, preheat a big skillet (I used my 12-inch cast iron skillet for this) to medium-high heat with a drizzle of olive oil and preheat the oven to 375F.  When the skillet is hot, add the chicken in one layer and sprinkle it with pepper.

Let the chicken brown for 2 minutes, then flip it and let it brown on the second side, then remove it to a plate.  It doesn't need to be fully cooked at this point, just brown.

Reduce the heat on the skillet to medium and add the butter and garlic.

Stir the garlic into the butter for about a minute (don't let it brown), then sprinkle the flour over the mixture.

Let THAT brown for another minute, then pour in the milk, mustard, and Worcestershire sauce.  Stir the mixture to loosen any chicken bits from the bottom of the skillet and thicken the sauce - the milk will thicken when it mixes with the flour/butter.

Now here's our shortcut.  Instead of stirring cheese into the milk sauce like a mac and cheese, we just throw it in and then layer everything on top of it.  Cheese slices!

Bake for as long as it takes to brown and bubble 20-30 minutes, give or take.  You can also make this way in advance and bake it for a little longer right when you'd like to eat it.

Ok, in hindsight I guess this is fine with just salad.  And bread, right?

Get after it.  There are no words.

« Pictures of Beck by Heather!
Curry Rice Soup with Tofu and Bok Choy »