Omg Baby It's Cold Outside and also the controversy about that song. Currently not ok and also historically fine because that's how people used to be/talk/sing, I think. I've noticed that people have a really hard time with two emotions coexisting, probably will be a theme of mine in 2019, talking about that more. 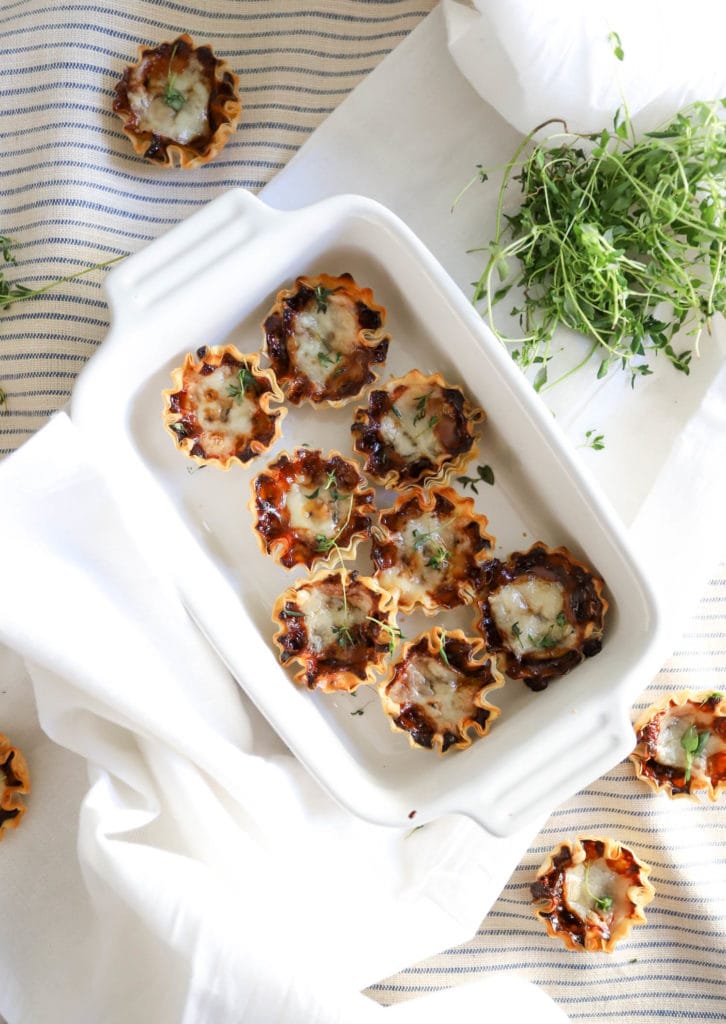 So how are you? We had an awesome-but rainy birthday weekend for Beck, and then the snow wrecked havoc on our little city because we aren't really equipped to manage it. Lots of people lost power for over 24 hours and we are on day three of no internet, which is NOT IDEAL for 1. TV watching and 2. working from home, which we both do. But we are managing, thanks to severely reduced expectations and mobile hotspots. 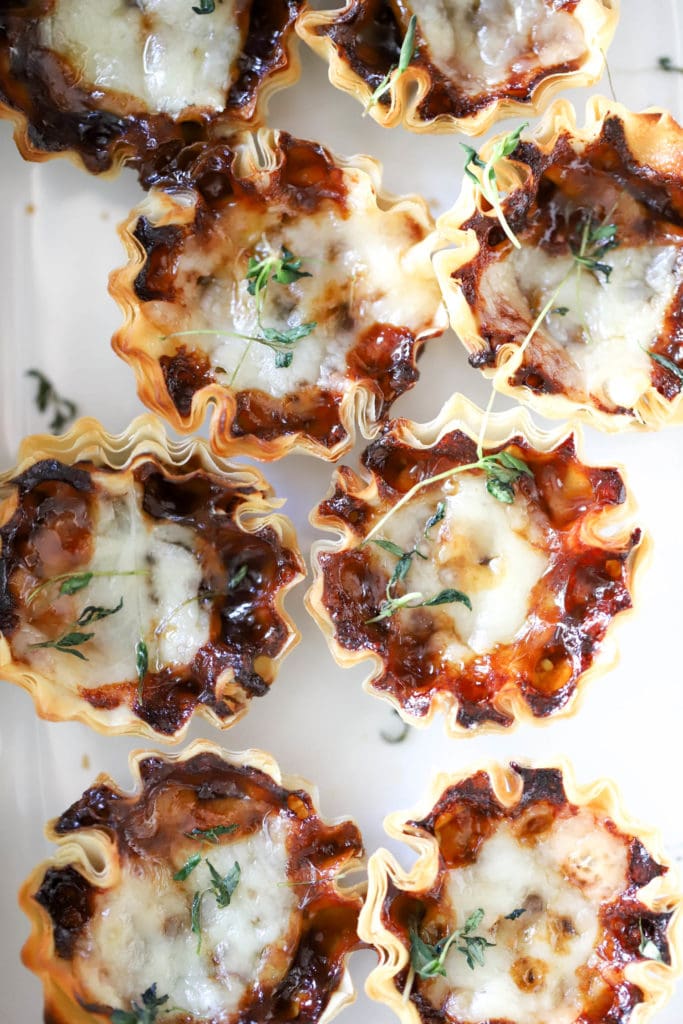 Tonight, though, we are GOING TO SEE HAMILTON. And also it is going to be 50 degrees and we are going to have a fabulous dinner beforehand. I have been looking forward to this night for so very long, and I've already heard great things about the tour we're seeing. It feels like an awesome time of year to get to see such a special show - chilly and decorated downtown and everything feeling so very festive. Festive like these! French Onion Fillo Bites, and get off me about how to spell it. There are three (maybe more) spellings used interchangeably on the internet and the box of pastry cups I used say Fillo, so that's what we're going with. These are super simple and involve a wildly delicious caramelized onion filling topped with sharp cheese. That is stuffed into premade pastry cups (that I love using this time of year) and baked, and everything gets ooey gooey and just makes the most delicious one-bite snack. I love these for parties or as a starter to a fancier meal, and honestly keeping some of the onion mixture around to spread on crostini wouldn't be a terrible idea at all. ...

END_OF_DOCUMENT_TOKEN_TO_BE_REPLACED

Continuing our leftover plan for the week! I feel like sometimes there are LOTS of leftovers of certain casseroles, especially heavier things. Maybe it's just our family, but if you make an 8-person casserole or side dish BUT there are 97 side dishes and people only eat a few spoonfuls of each thing....leftovers. 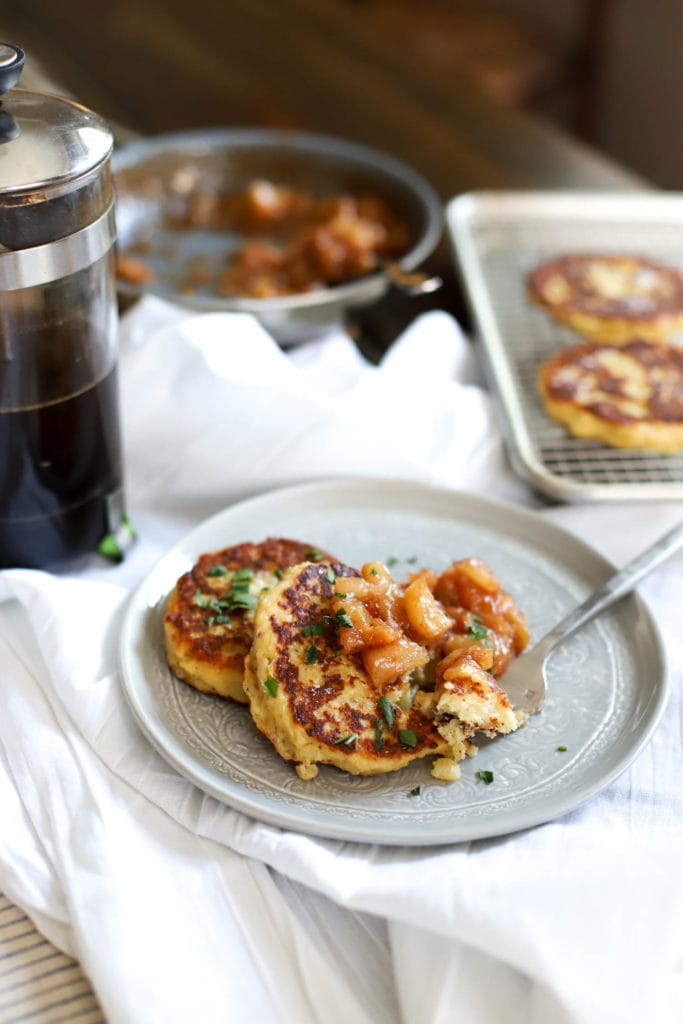 Like mashed potatoes! That we are going to fry into patties and top with stewed apples, latke-style. If these are inauthentic enough, feel free to re-purpose the idea for Hanukkah. Here's the recipe that I used for this batch of potato cakes. 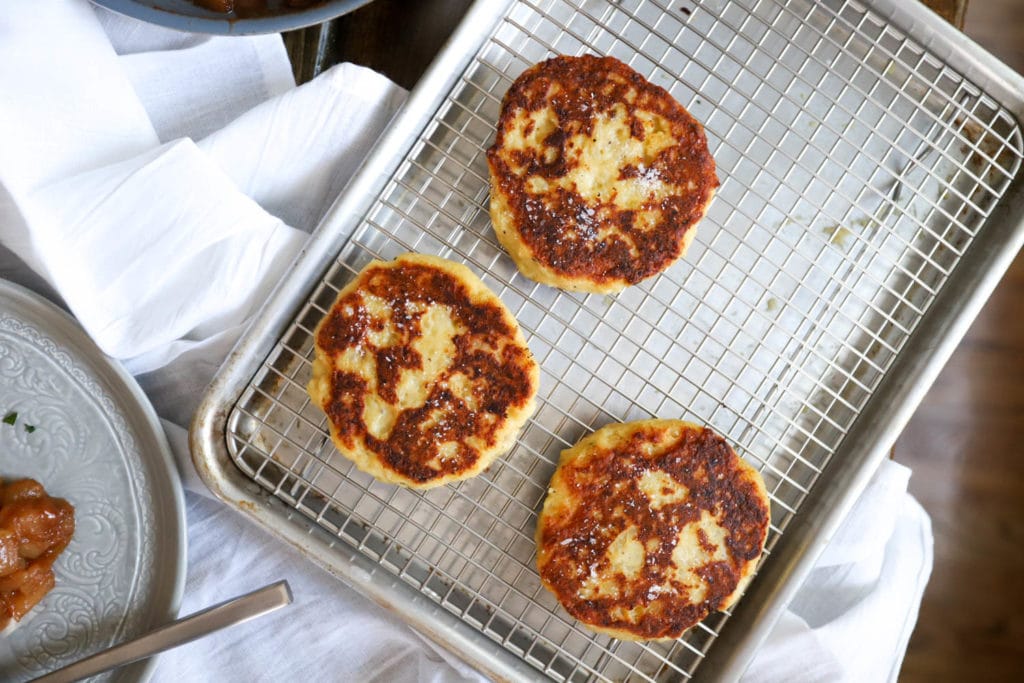 Since Beck has gotten big enough to care we usually do a breakfast all together one or two days per week - usually on weekends when Jay is with us, but also sometimes Mondays call for pancakes made with all white flour and extra butter, and I'm not above that at all. I'm REALLY hoping to score some leftover mashed potatoes this week to make these on Saturday. They're super easy to make and you could definitely form them the night before and fry them right before breakfast, maybe throw some bacon in a skillet just for good measure.

END_OF_DOCUMENT_TOKEN_TO_BE_REPLACED 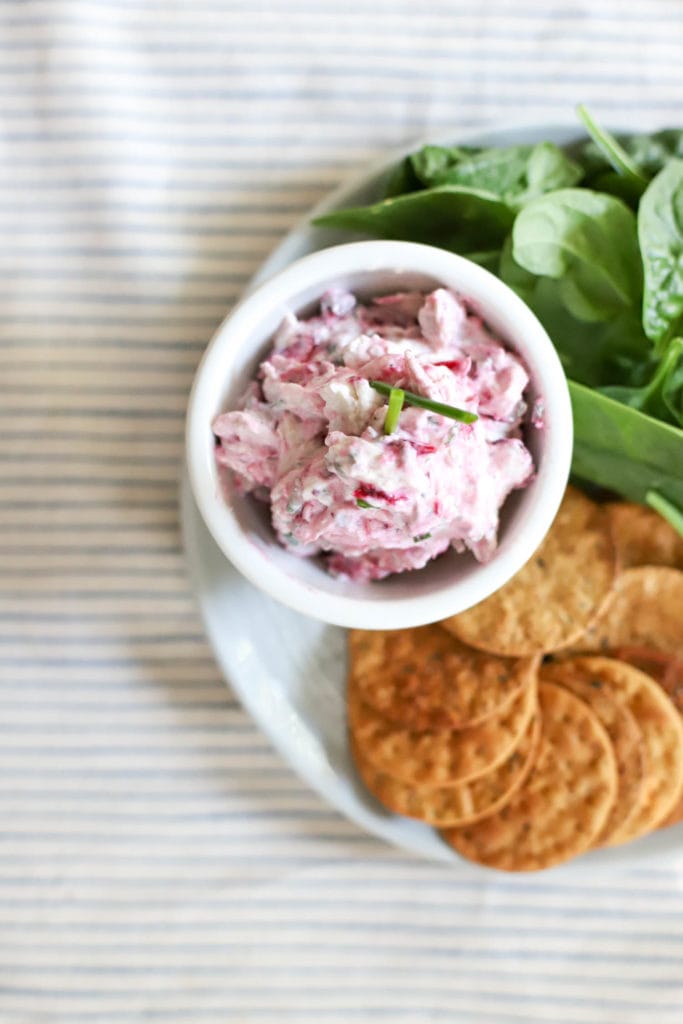 I've said it a gazillion times, but turkey is definitely not my favorite part of Thanksgiving. Appetizers and casseroles and wine are. Clearly.

I think that's because turkey can be underwhelming, or dry, and it DEFINITELY doesn't hold up as well in terms of leftovers like, say, some kind of buttery cheesy casserole does. Leftover turkey can be chewy and tough and just bland, but I'm NOT here to celebrate food waste, ever. So we had to do something wonderful with leftover turkey.

Add mayo, obviously was the answer. This turkey salad is so different from roast turkey from Thanksgiving day, and the addition of cranberries livens up the flavor for such a fun different twist. This would be so yummy for a brunch sometime this weekend, or on crackers/with greens for lunch or a snack. Plus: it's pink!...

END_OF_DOCUMENT_TOKEN_TO_BE_REPLACED

This is of many things currently in my freezer that I'm trying SUPER hard to not eat until after the baby is born, easier said than done. I've been trying to make a thing or two each week to put in the freezer before the baby is born. Mostly I've done sauces to use in quick meals, I froze a bit of slow cooker pork for tacos, and some oatmeal-heavy breakfast-meets-dessert stuff is high on the list for the sake of not just eating a half loaf of bread each morning AND because oatmeal is supposed to be great for lactation but I don't usually run for bowls of straight oatmeal so. Cookies instead! 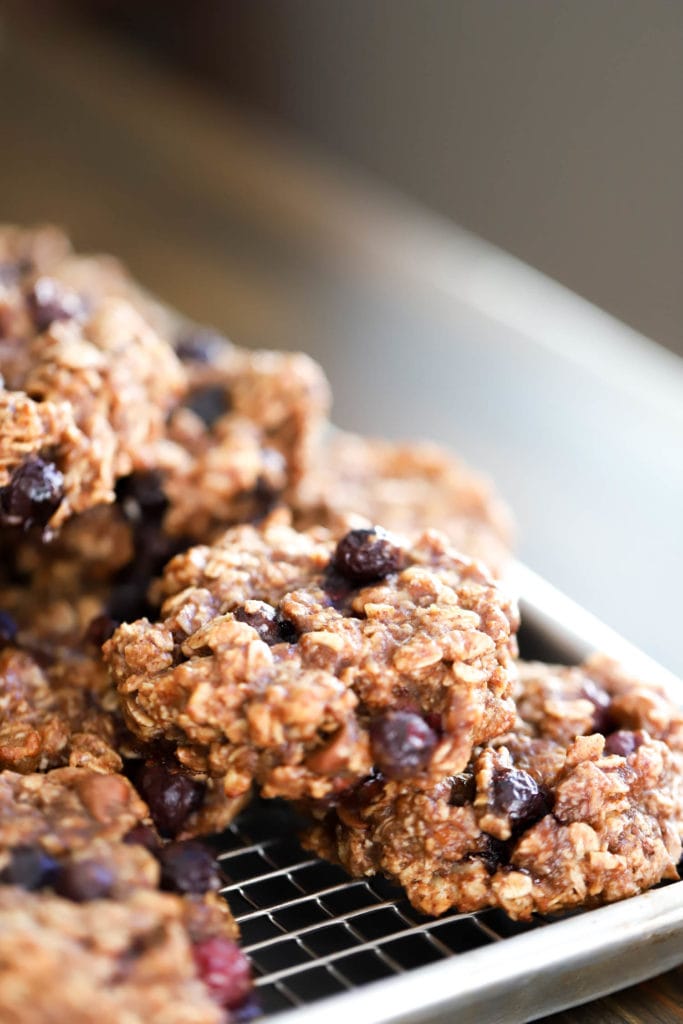 This particular inspiration came from the fact that I had some frozen blueberries leftover from my sister's inlaw's yard this summer (riddle me that). Part of all this freezer cooking is that we are using up stuff that was already languishing, so I used something from the freezer to make something for the freezer, which is pretty much like saving for retirement, right? Tres meta.

This recipe came straight from Sally's Baking Addiction, and I doubled it and added chocolate chips because chocolate is probably definitely important for lactation.

END_OF_DOCUMENT_TOKEN_TO_BE_REPLACED

I couldn't wait. As promised, after we watched the first episode of Salt Fat Acid Heat (why are the episodes not in the order of the words in the title?), all I could think about was making focaccia. Ok maybe more all I could think about was eating focaccia, because the filming of the episode was so lovely and the language used with the imagery was just so compelling, I NEEDED to experience salty, oily-in-a-good-way bread ASAP.

The obvious hiccup being that I 1. don't bake and 2. have literally never made anything with yeast. Ever. And if we're being honest, 37 weeks pregnant with a messy house and full-time toddler and part-time job is really not the time to get all LET'S TRY NEW THINGS. Having a second child is new enough. Eating bread was the goal. Luckily, I had a package of pizza dough in the fridge that had all but tripled in size in the few days it had been in my fridge. Tripled! I bought it on a whim thinking that I'd make pizza for Beck as a treat, but I hadn't done so yet or told her about it, so I took to the interwebs to see if other people make focaccia with pizza dough.