We're going all vegan on your asses today, y'all. 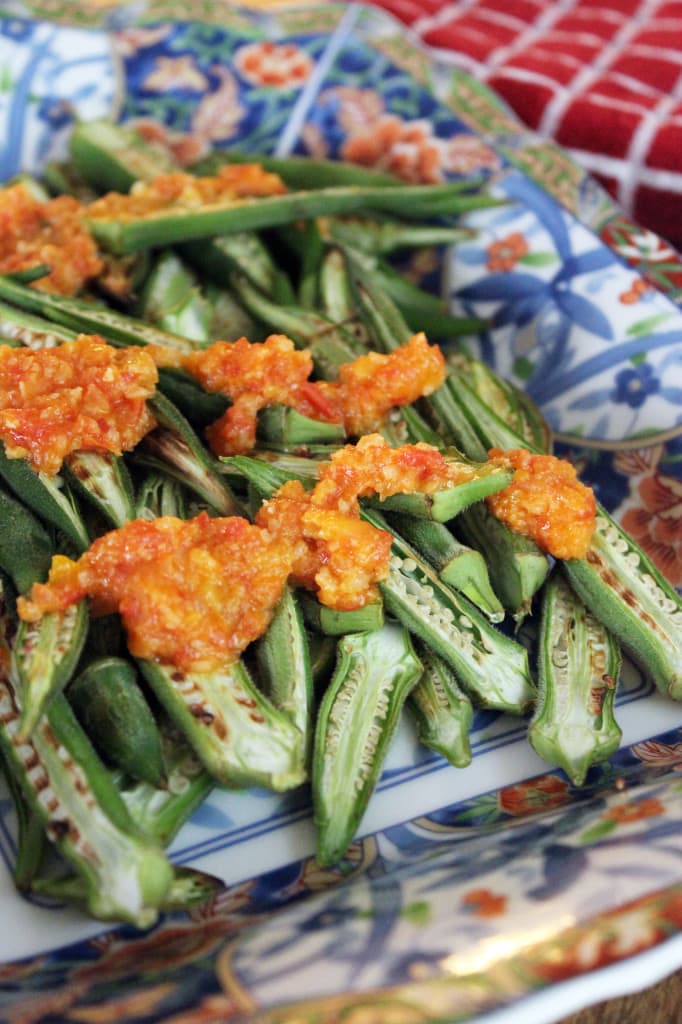 Sometimes vegan is appropriate after a booze and meat-filled long weekend, yes?

In other news, this is one of my most favorite new side dishes ever.  I made it a few weeks ago for dinner, then I taught it at a cooking class, now I'm showing YOU.  It's that good.  3 times in 10 days good.

We had lunch a few weeks ago at one of our favorite local restaurants, Bacon Brothers, and they had a side dish that was kind of like this.  It was blackened okra with romesco, and it was SO GOOD.  It was a little different than this: we didn't char our okra quite as much and we used fresh tomatoes in the sauce, but both versions were insanely delicious SO if you go to Bacon Bros. before they change the menu try theirs, and if you don't, make your own!  Okra is everywhere right now, at least where we live, and side dishes made from super duper cheap local produce just makes ya feel good about life.

You need fresh okra, duh.  Then for the sauce you need tomatoes, olive oil, almonds (these are salted, but you can use any kind of almonds you like), a clove of garlic, some onion, and smoked paprika.  I LOVE smoked paprika and find it weird places like TJMaxx, but if you don't have any and don't feel like using it just skip it.  No worries! 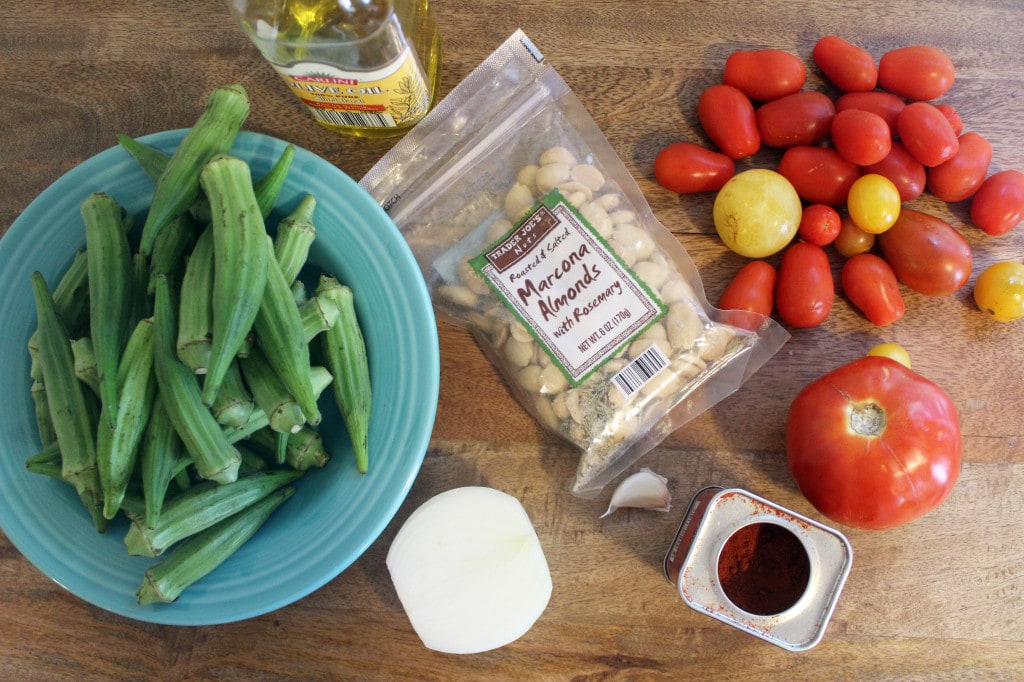 Let's make the sauce first.  The "prep" involves cutting the onion into large chunks and peeling the garlic, then doing the same with the tomatoes.  If you use all grape tomatoes you can just leave them whole. 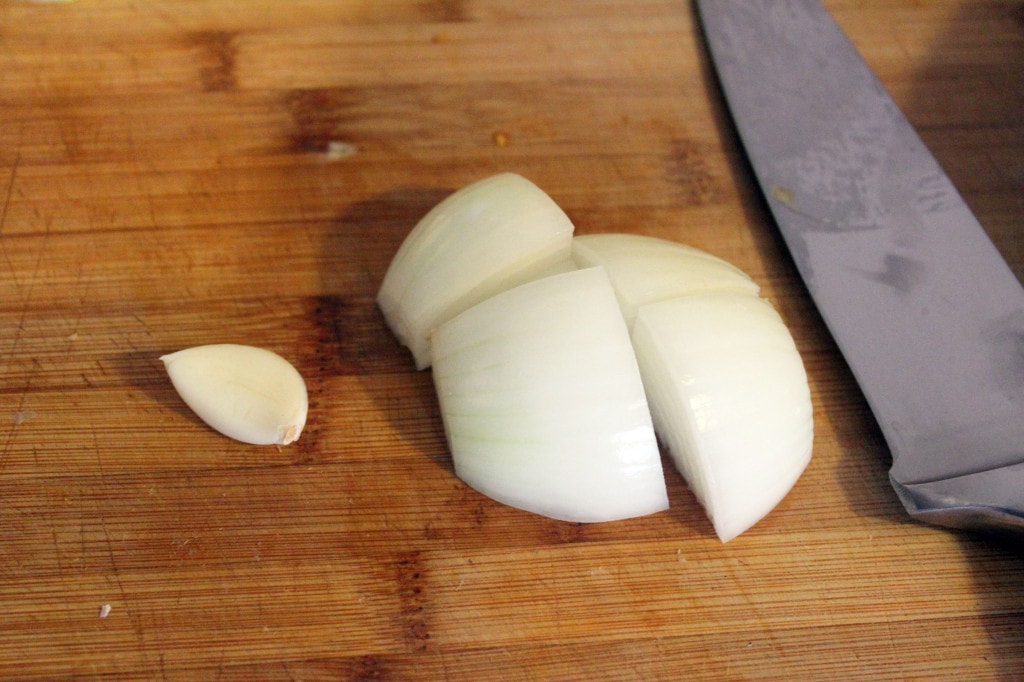 Then, add the onions, garlic, and almonds to the bowl of a food processor. 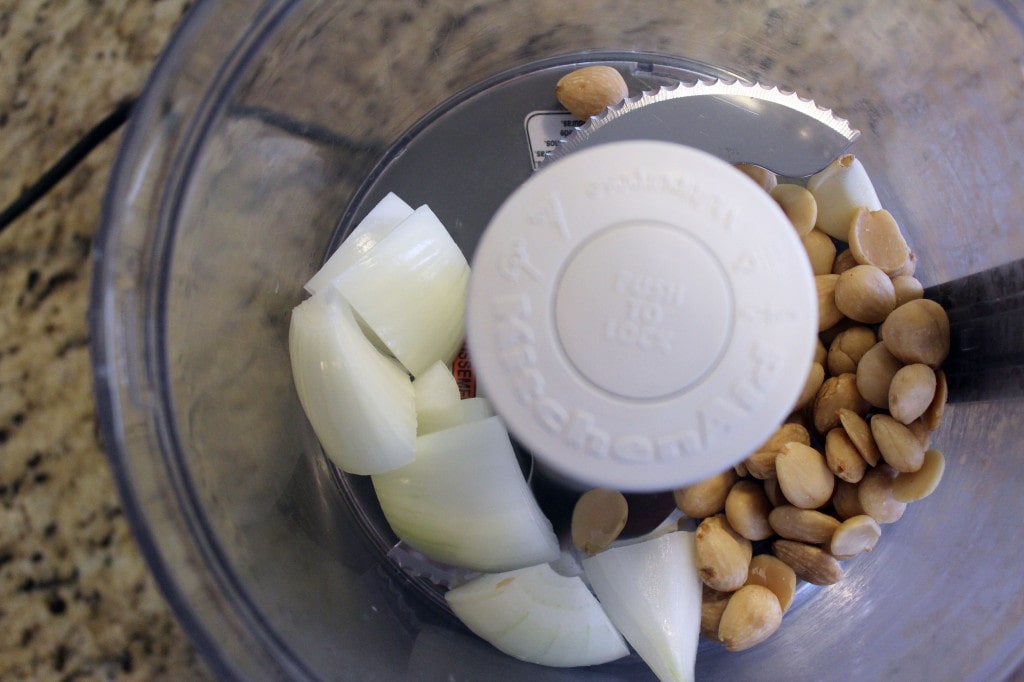 Pulse the onion mixture to chop it up a little bit, then add the tomatoes, smoked paprika, olive oil, and a pinch of salt. 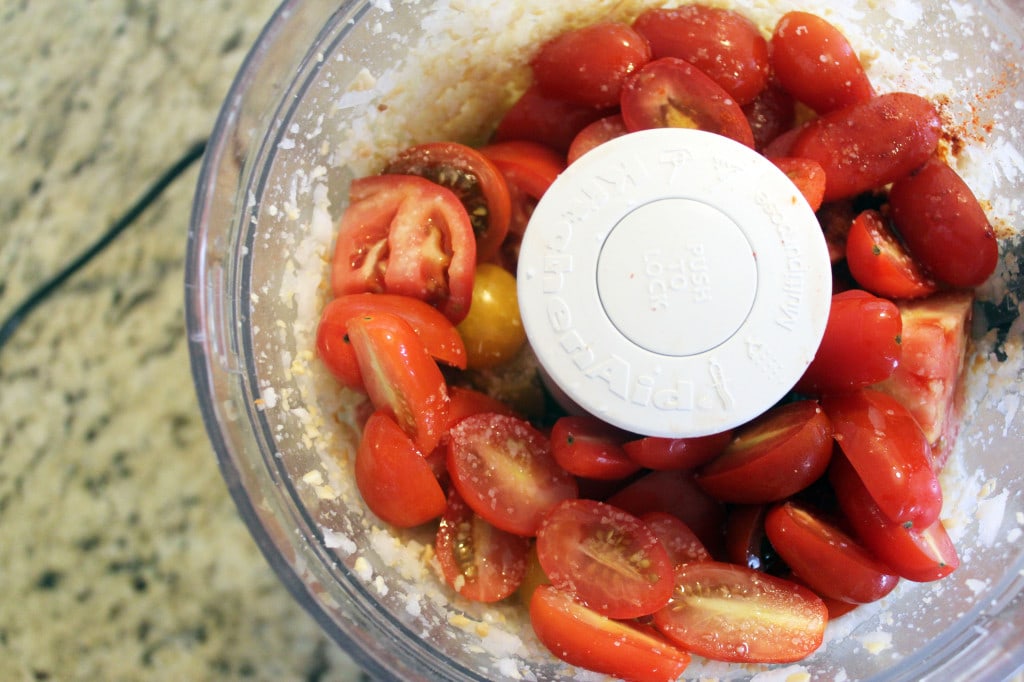 Pulse, THAT, and we've made a sauce! 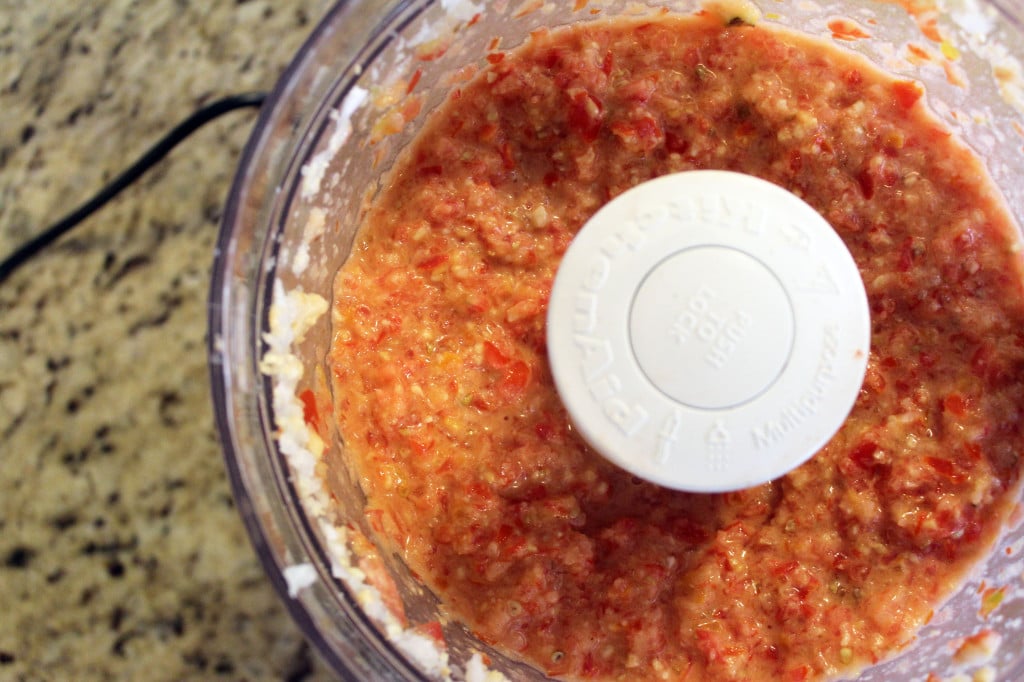 Now, pour all the sauce into a skillet and turn the skillet to medium heat. 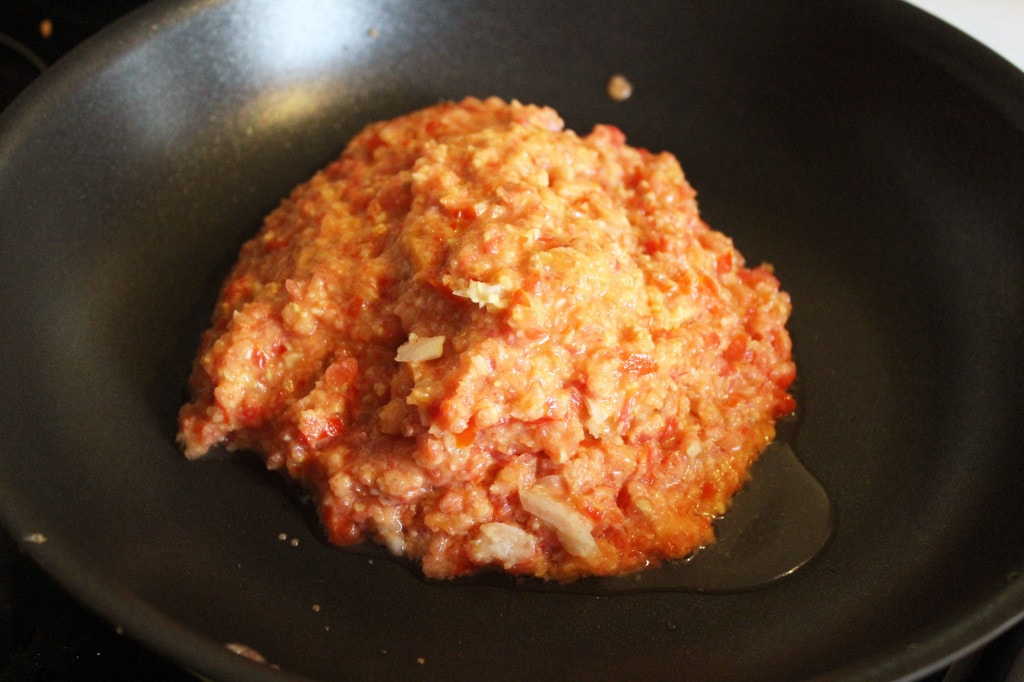 Let the sauce warm gently and start to bubble a bit to cook the onions and garlic. 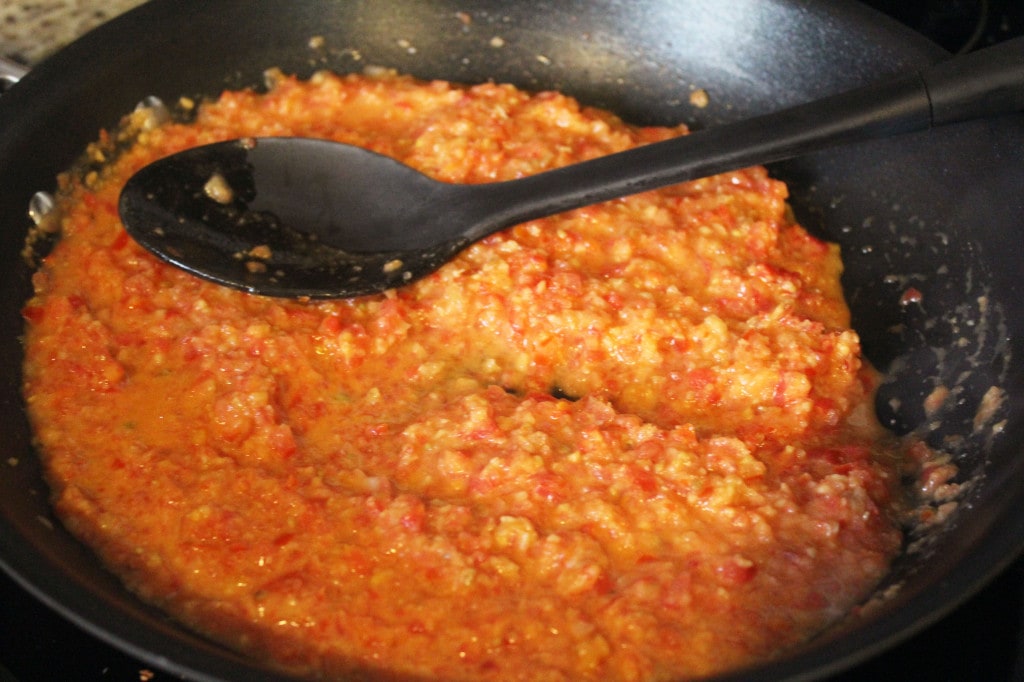 Now, onto the okra!  Turn the broiler to high.  Cut the okra in half lengthwise and arrange them cut side up on a baking sheet.  Sprinkle the okra with salt. 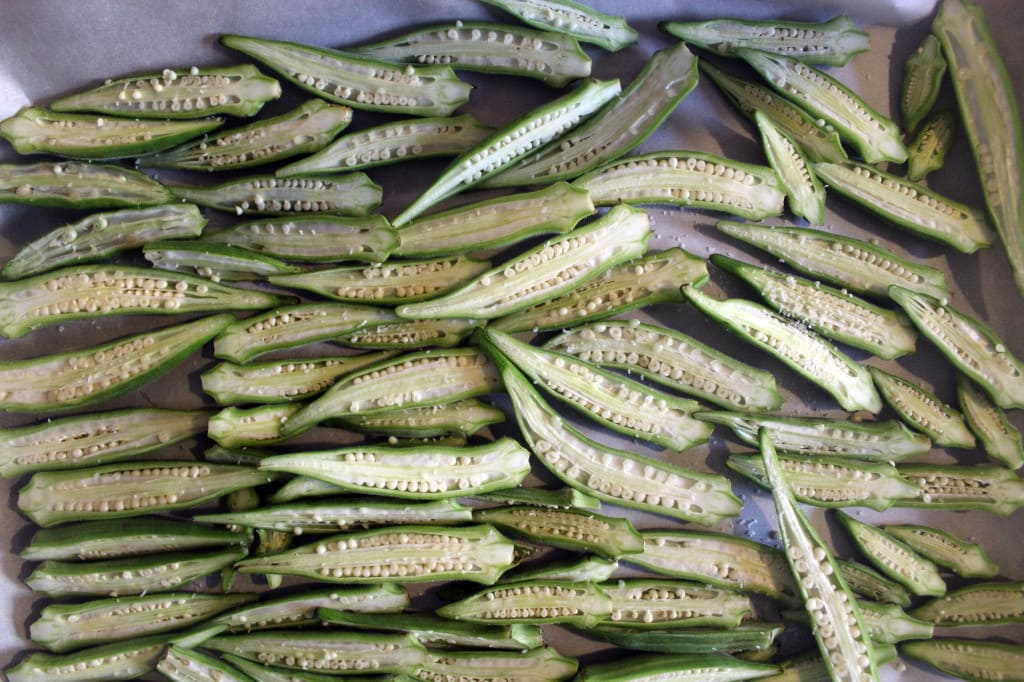 Broil the okra for 4-6 minutes until it just starts to darken on top - no need to flip it.  The time it takes to cook the okra will depend on how close your pan is to the top of the oven. 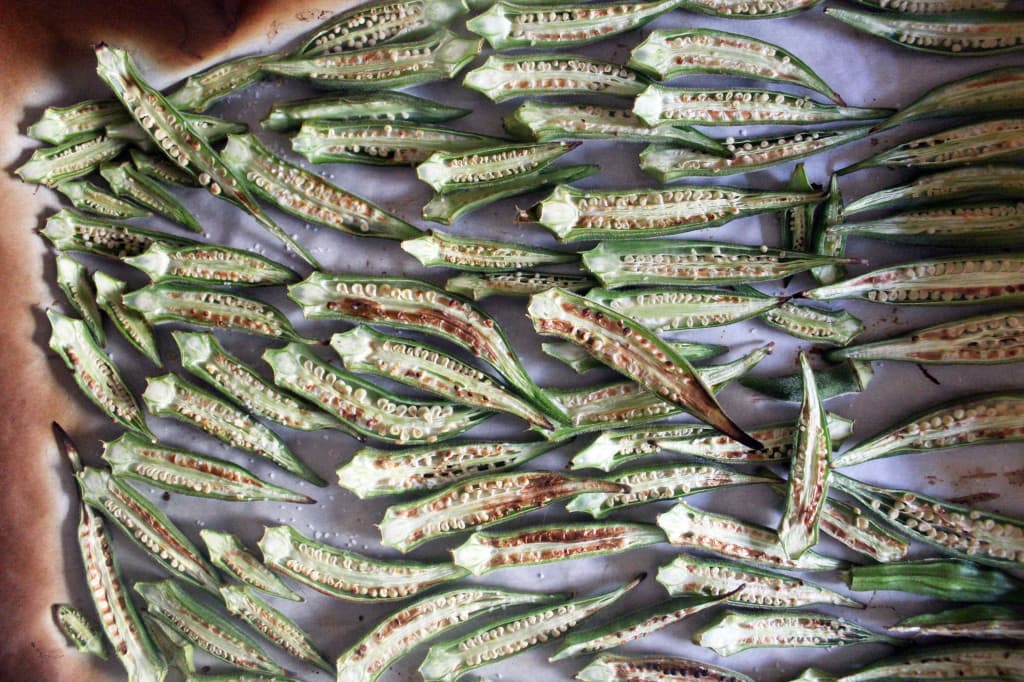 When the okra is done, taste the romesco sauce and add salt if you'd like.  Then, serve! 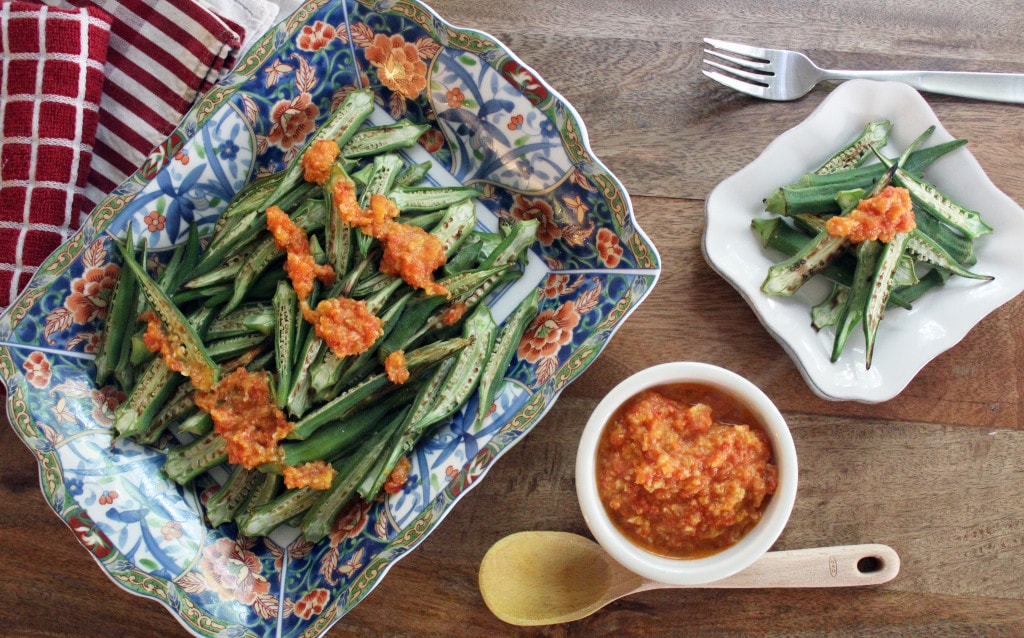 This is GLORIOUS.  The fresh tomatoes are super sweet but the almonds make the sauce almost creamy. 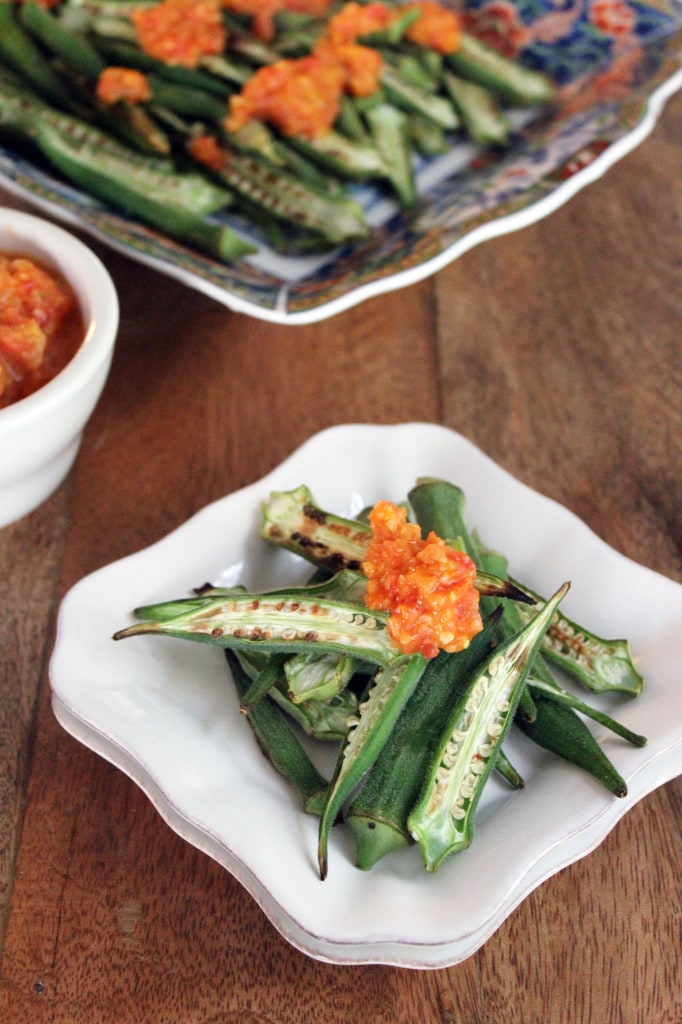 And.  For anyone who hates okra because "it's slimy," this isn't.  I like the slime, but the broiling takes it almost all away, and you're left with a really mild flavor and no slime. 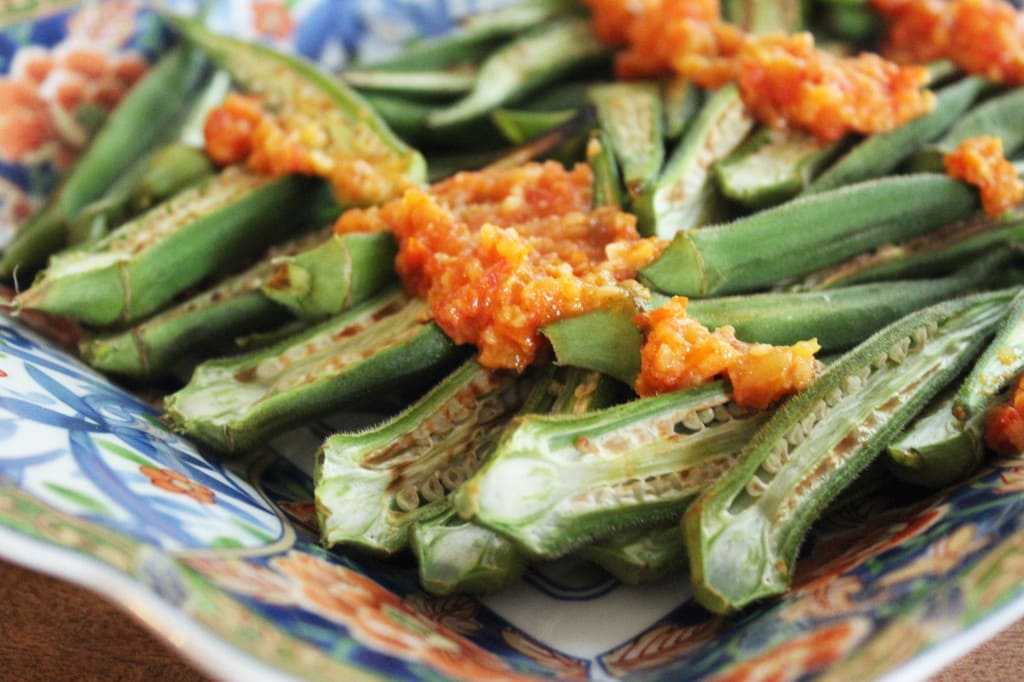 Try this soon.  And pair it with cheese or something to offset the vegan.