Aaaand round two.  Other things we're loving + a little bit about Beck's Nursery.  I've mentioned before that we went super hard on the hand-me-downs for the nursery, nothing matches, rather, we tried to coordinate and kind of keep a vague theme going throughout. 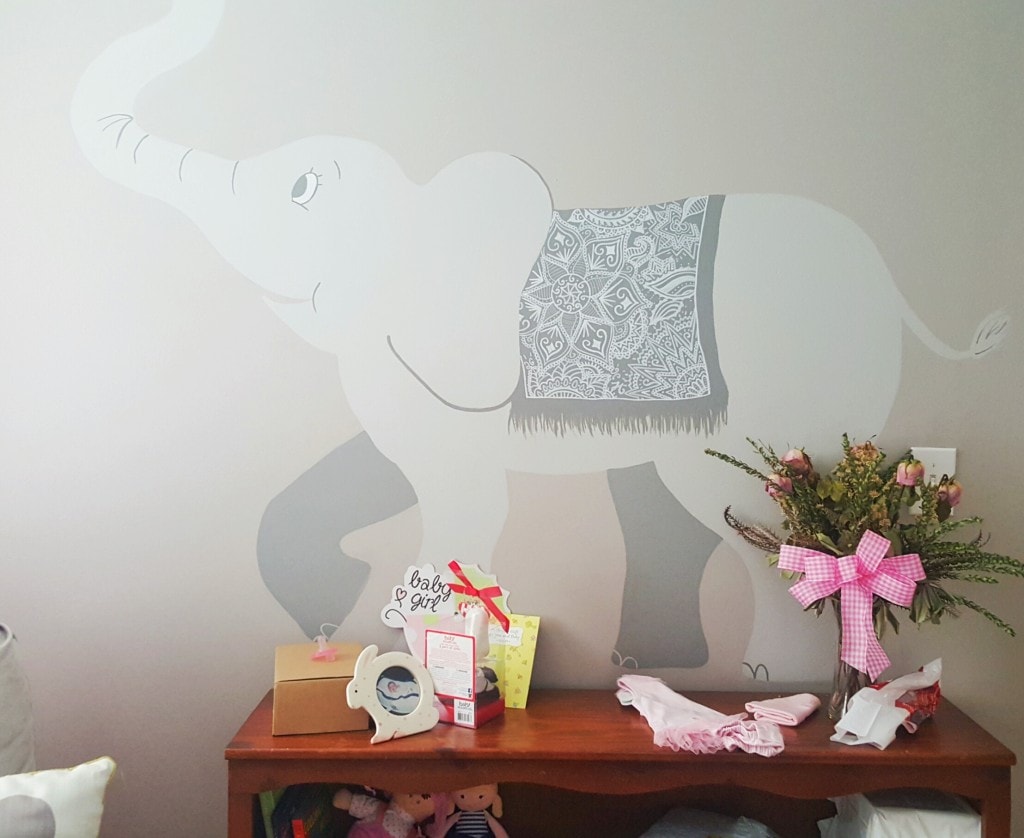 My biggest thing with all of our choices was that I really didn't want anything besides a crib that absolutely screamed nursery - I wanted everything to be able to grow with either Beck, other babies, or our house, and then I used little accents like the mobile to make the room feel like a baby room.

In furniture, we got a sleigh crib from a friend, a mattress from Jay's sister, and a few Burt's Bees sheets from BuyBuyBaby.  I LOVE Burt's Bees stuff and find it a little bit sturdier-feeling and softer than the Aden and Anais stuff, but I'll probably be crucified for saying that.  We have a book shelf from my parents that has literally been in every kid room for 30 years, and I love that now we have it in our house.  My sister painted an amazing elephant on Beck's wall, and it's my absolute favorite thing about the room.  See that picture up there?  She did the entire thing, including the blanket, by hand.  We did Sherwin William's Requisite Gray paint, and if we ever move I'll probably paint every bedroom that color, I love it so much.

For changing, we have a used Ikea dresser topped with a hand-me-down changing pad, one of the regular foam ones.  I like this setup instead of a true changing table because you get a ton more storage with a dresser and obviously can use it much longer than something that is only meant for changing.  I have Burt's Bees changing pad covers and adore them. 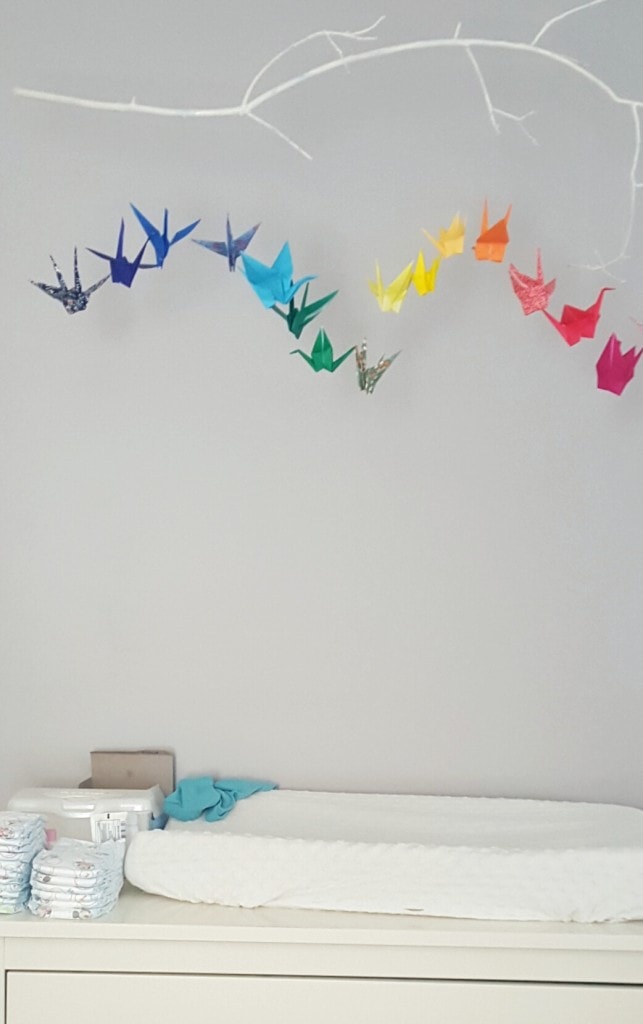 The one big purchase we made for our nursery was our glider, also from BuyBuyBaby.  I can't find it online but I think it's Children's Castle brand?  We ended up going with a glider + ottoman instead of a recliner, but I can see benefits to both.  We use the glider the most to rock Beck to sleep for naps, and it's just cozy and comfortable but also super basic.  If we had room in our living room we'd move it to the main area of the house, but our living area isn't set up to accommodate another big piece of furniture.  We were able to use the 20% BBB gift cards coupons on each of the pieces to this set and we had a really generous gift card from Jay's family, and I really think, if we were going to spend money on any one big thing, we'd do it all over again. 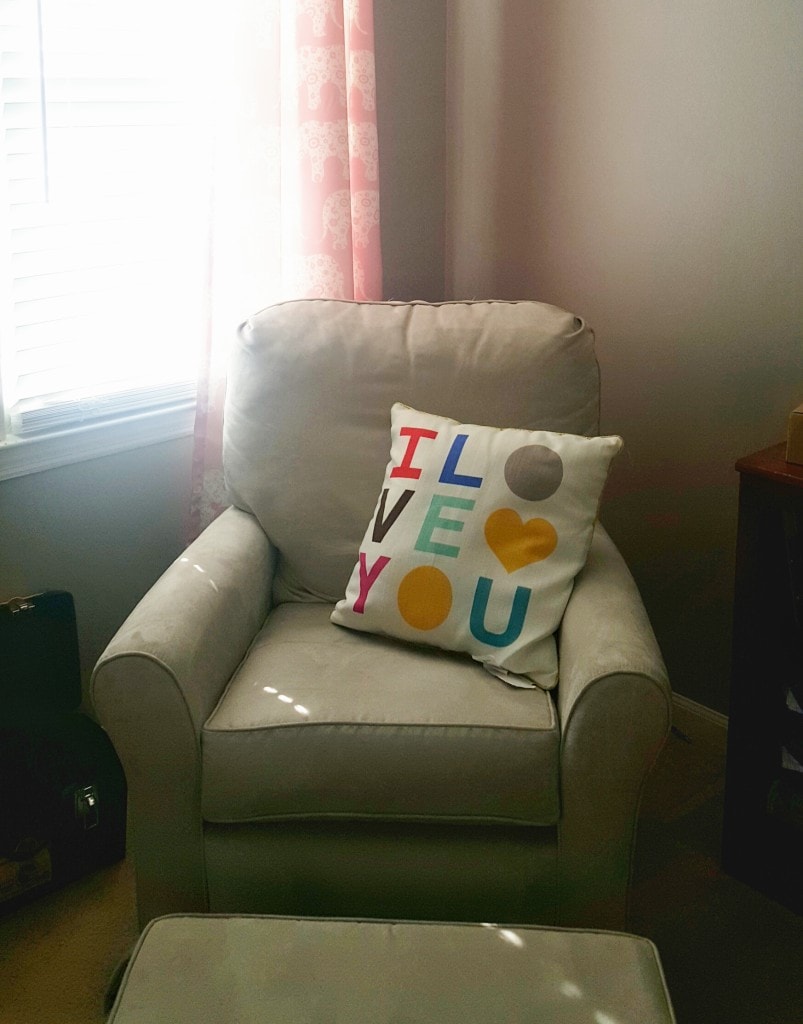 My mom got us these curtains for our shower, and they're the girliest thing in the room and I'm fully obsessed with them.  They come in navy, too!  I also got these white plastic shelves from Target and I have some in Beck's closet and some in the room for blankets and swaddles.  I use one of the bins for dirty clothes, one for toys, etc.  I like them because they're cheap, look nice enough, and are light enough that if they ever toppled over Beck wouldn't be hurt.

Now, onto STUFF.  Jay's Fantasy Football friends threw us a diaper shower, and everyone brought a pack of diapers or wipes and a book as a gift.  It was one of our favorite showers, super low key and fun, and I LOVE the diaper idea because it's allowed us to try several different brands to see what we like.  I toyed, and still toy with the idea of cloth diapers, but I'm at a point right now where I really have no extra time in the day to add new "systems" to our day-to-day life.  We've tried Honest (cute, but expensive and a few blowouts), Pampers Swaddlers (the gold standard and the wetness indicator is great but you will know when your baby is wet and also I think we get more blowouts in these than most other brands) and Baby Dry (almost identical to Swaddlers but seem to fit Beck better, fewer blowouts), Seventh Generation (like the environmental friendly factor, fit was good for Beck, don't love the paper bag color), 356 (Whole Foods brand, good for the environment and hardly any blowouts), and are currently working our way through a big package of Huggies, which we LOVE, but I hate that they're covered in cheesy designs.  But, the fit works really well for Beck's current size and there are hardly ever any leaks.  We've tried a ton of wipes too and I honestly don't have any preference on these.  The name of my game is to use as few wipes as possible because I think over-wiping causes diaper rash faster than anything else.  If Beck ever has any booty redness we use Boudreaux's Butt Paste or Aquaphor.  I have a few other kinds of diaper cream and they all seem to work kind of the same, but that's just me!  I think avoiding rashes is easier than treating them, hence the avoidance of wipes.

Beck hardly uses any body products, but we do really like the Aden + Anais Mum and Bub lotion, which is almost always sold out, and for good reason.  It smells super duper delicious!

For bedtime, we don't use blankets, only swaddles so far.  We were lucky to have a friend pass down several brands of swaddles for us to try, and our favorite by far is the Miracle Blanket, which has these flaps that keep Beck's arms by her side while she sleeps, and I think it's given her the best night sleep so far.  When she was smaller we'd use regular swaddle blankets for nighttime, but she fights out of them pretty quickly now.  We've also tried a Woombie Air which worked pretty well but the zipper always scared me, and we have several of the Summer Swaddle Me swaddles with velcro - people love those but I never felt like I could get them tight enough for Beck.  She sleeps best when she's basically mummified, and Miracle Blanket does the trick for her, even though by morning she's mostly wormed out of it these days.

In blankets for the day, our favorites are a few that were handmade by friends - I find that they're the stretchiest for wrapping the baby tightly, which she loves.  We do have some of the regular Aden and Anais swaddles, and they're fine, but the bamboo ones are WAY softer than the original muslin ones.  We have these and they're my favorites; we bought them when Beck was 3 days old. I also have, wait for it, these Burt's Bees ones, and love them.  Stretchy and soft!

Beck doesn't have a ton of toys yet, but we have some random rattles from friends and basically anything that makes noise is a winner with that girl.  We also have this Baby Einstain entertainment mat and she loves lying on it looking in the mirror.  She is NOT a fan of tummy time, but this softens the blow somewhat!

My favorite brand of clothes is Primary, hands down.  We have a few Carter's things and they're fine too - some of their new spring stuff is super duper cute as well. Gerber onesies are my favorites for plain white onesies, they're super stretchy but don't get baggy by the end of the day like some brands.  I have a few Le Petit Bateau things for Beck too that I got on their clearance sale, and they're all adorable, albeit totally overpriced.  We were also introduced to the brand Kissy Kissy by Jay's very fancy cousin and aunt, and the stuff that has been gifted to us from that line is SERIOUSLY adorable.  It's really soft like the Primary stuff and doesn't show wear even after several washes, which is key!

WOW babies use a lot of stuff, and we're at three effing months.  What am I forgetting?  What else should I know about!   This is the most fun for me, thanks for indulging this for two days in a row.  Yesterday's favs are here, if you missed them!