Home » Food » Vegetables are Best When They Involve Cheese 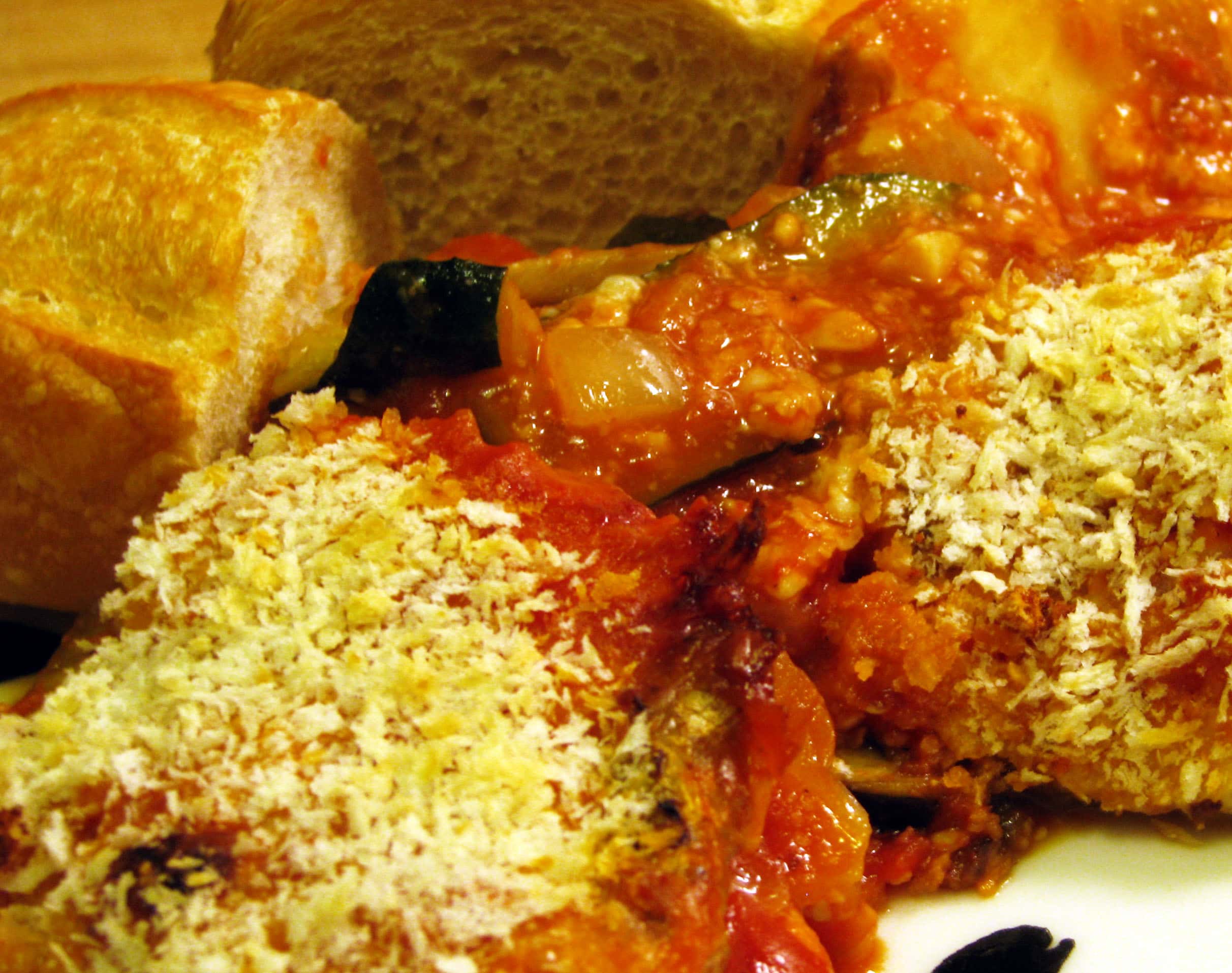 I've been on a vegetarian meal-kick lately, in part because our farmer's market is so stinking cute and MEAT IS EXPENSIVE.  Srsly.  Also, I've been feeling kinda mushy and lumpy and apparently red meat can have a hand in that.

And definitely not cheese.

Listen, I don't judge you, ok?

So anyways, since I'm dating a manorexic man and am trying not to get fat myself while still consuming cheese and wine to excess, this was a great dinner for us the other night.  It's so easy and (duh) you can switch the veggies out any way you'd like!  It's healthy, too!   We're basically making lasagna with no meat or noodles.  The amount I made was for 4-6 servings.

For this dish, you'll need:

For the vegetables, you want enough of each to make it's own layer, which means it should completely cover the dish you're using, like lasagna noodles.  I used a baking dish that was 6x9 and about 3 inches deep.
s
Don't like some of those veggies?  Pick your own!  Mushrooms, squash, asparagus, or almost anything you can think of would be delicious!
s
First, slice the veggies and grill them. 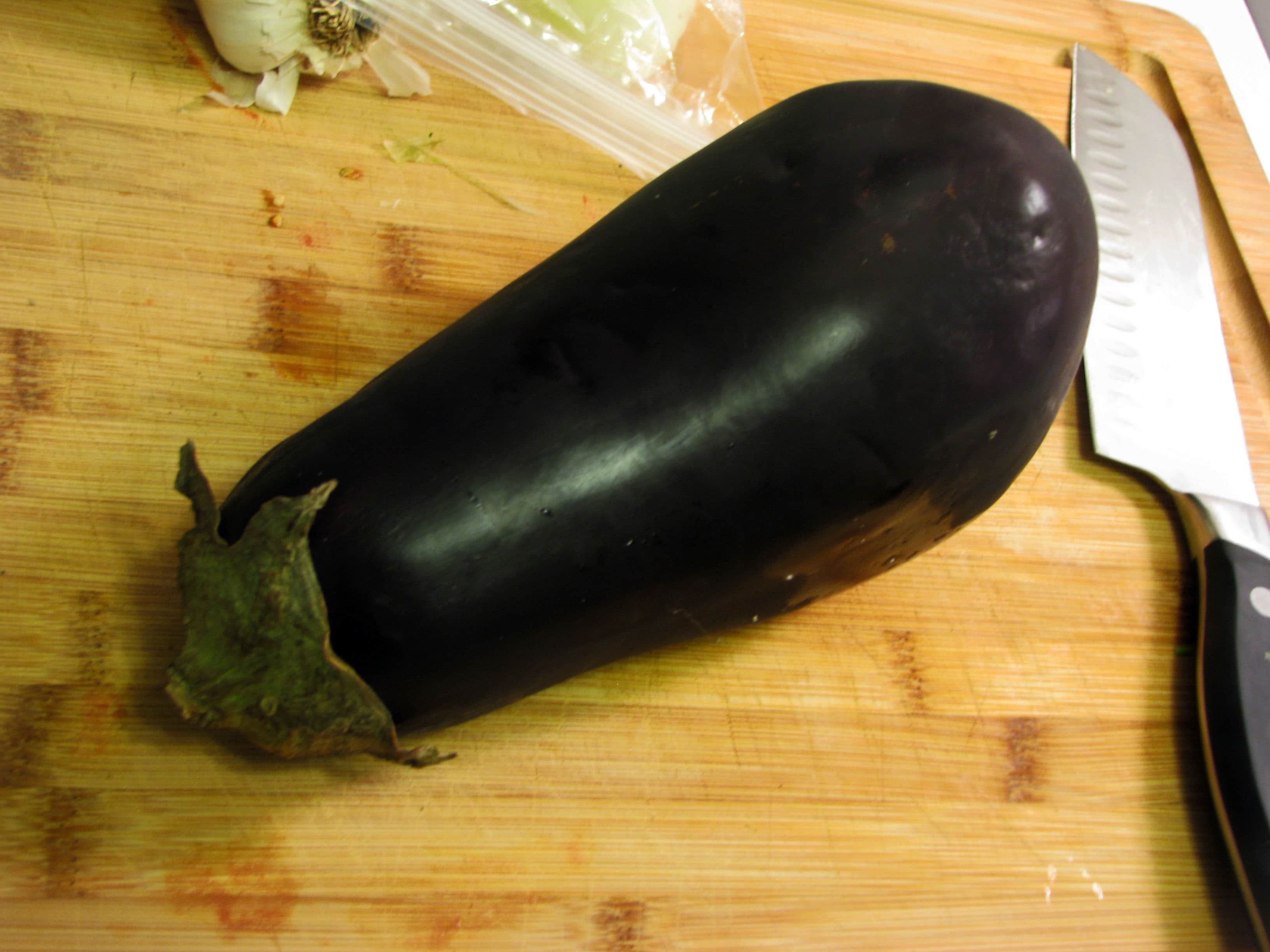 I prefer to peel the eggplant when it is large like this because the skin can get rather tough.  To peel the eggplant, I cut off the top and bottom, then stand it on it's side and cut the skin all the way down - if some is left over it's fine!
s
Then I make large slices, about ½ inch thick. 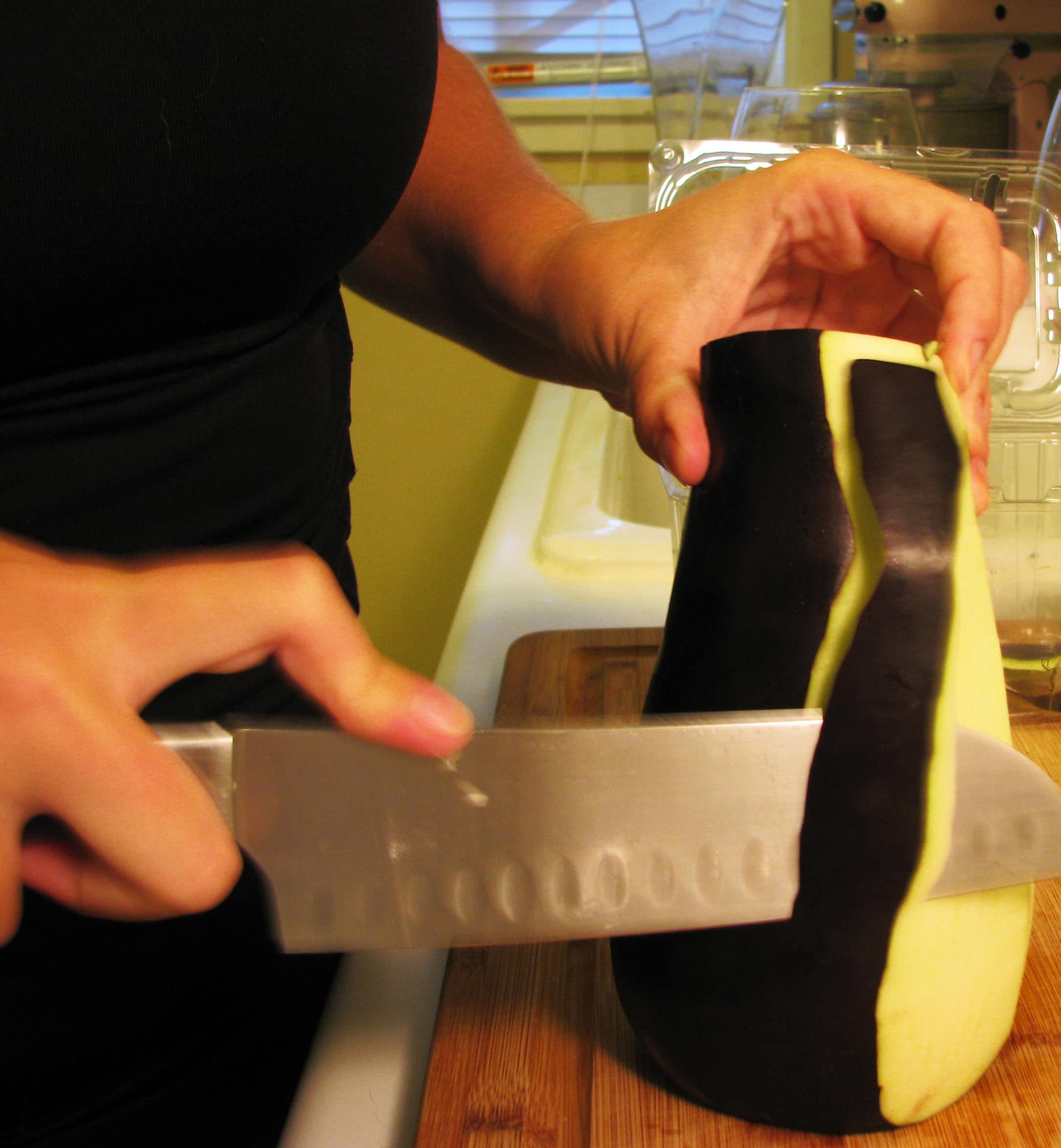 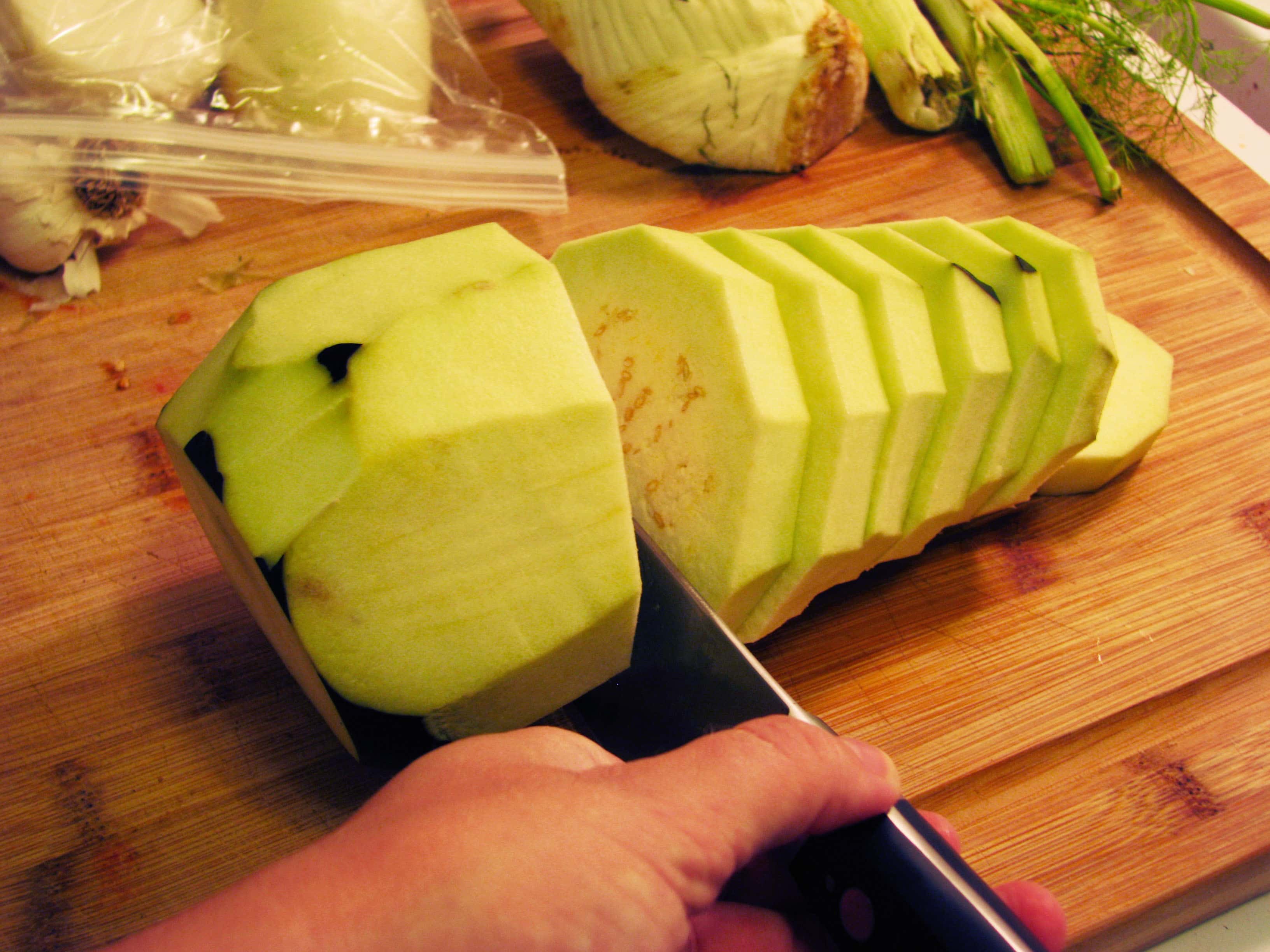 Now, grill the eggplant.  I'm using a grill pan, cooking (Pam) spray, and salt for my veggies.  You could use a frying pan, outdoor grill, or any method you'd like to get the veggies halfway cooked and brown on both sides. 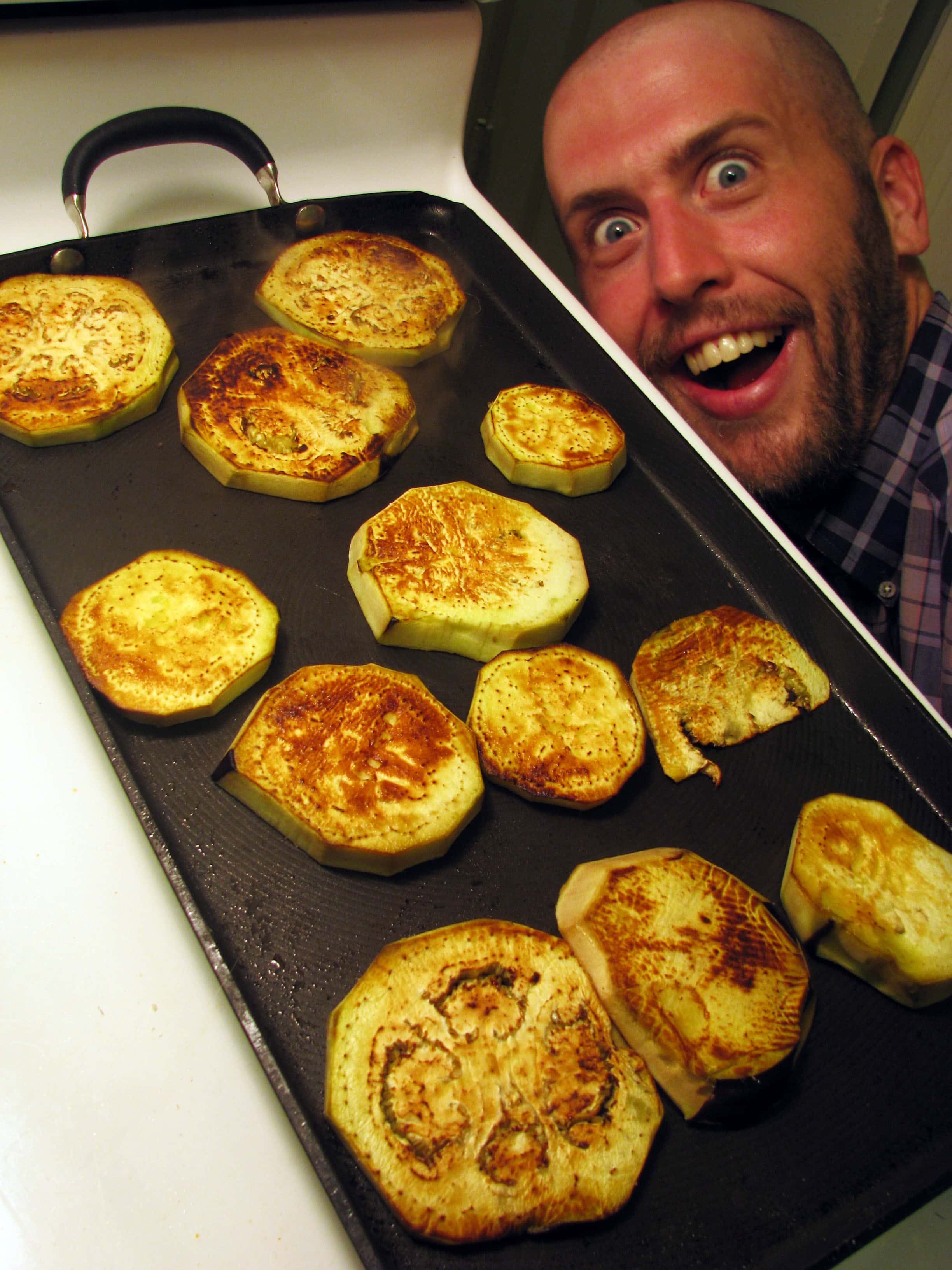 I'm sorry.  This happens in about 30% of pictures I take when I'm cooking while Jay is around, but usually I get another one without him.  I neglected to do that this time.
s
Anyways.  The eggplant is brown and lovely, and that's really all that matters.
s
Go light on the salt, ok?  Just a sprinkle on each side.
s
Meanwhile, slice the fennel and grill it in a pan (I did this because mine fell apart and I didn't want to lose any small pieces).  I don't take out the core in this recipe because it cooks long enough to soften and be delicious.  Don't fear fennel core! 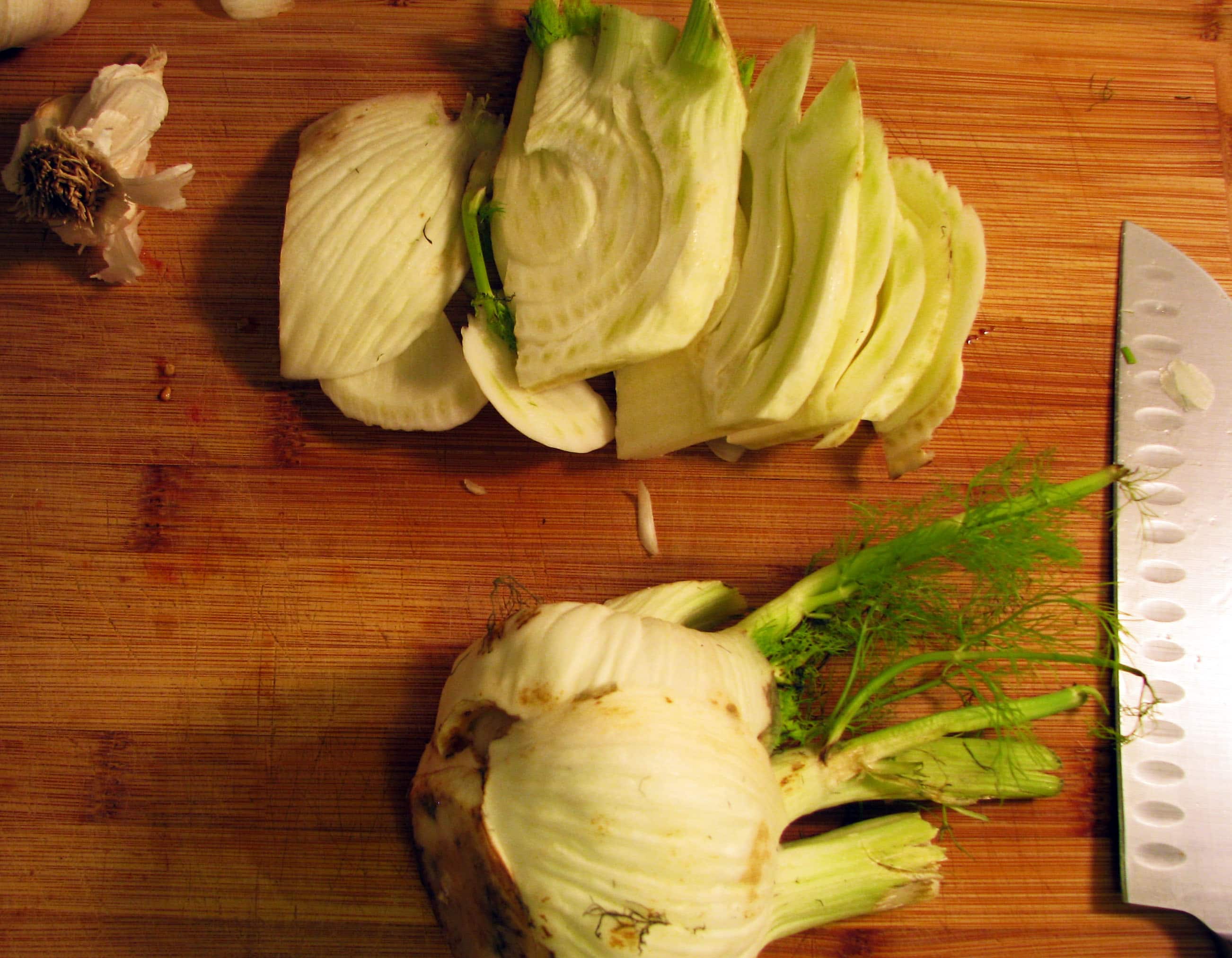 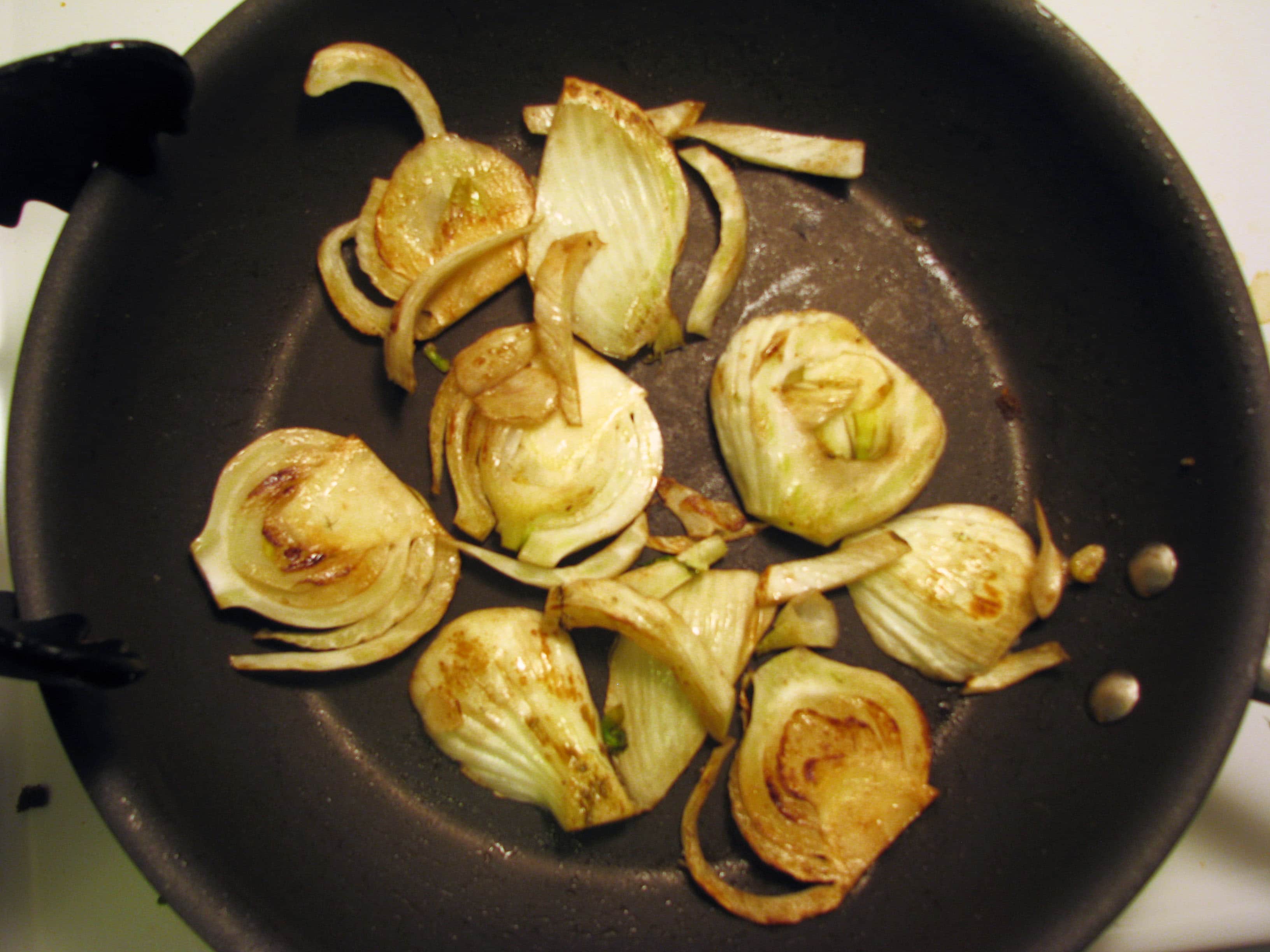 As each veggie cooks remove it to a plate or keep it in the pan off the burner.  Whatever works for you.
s
I would like to announce to you now that I am a real person and sometimes Jay photographs me while I cook.  I usually delete these pictures, but in the interest of full disclosure I'd like to show you this one.  Please note the sweaty yoga clothes, multiple chins, and lack of makeup. 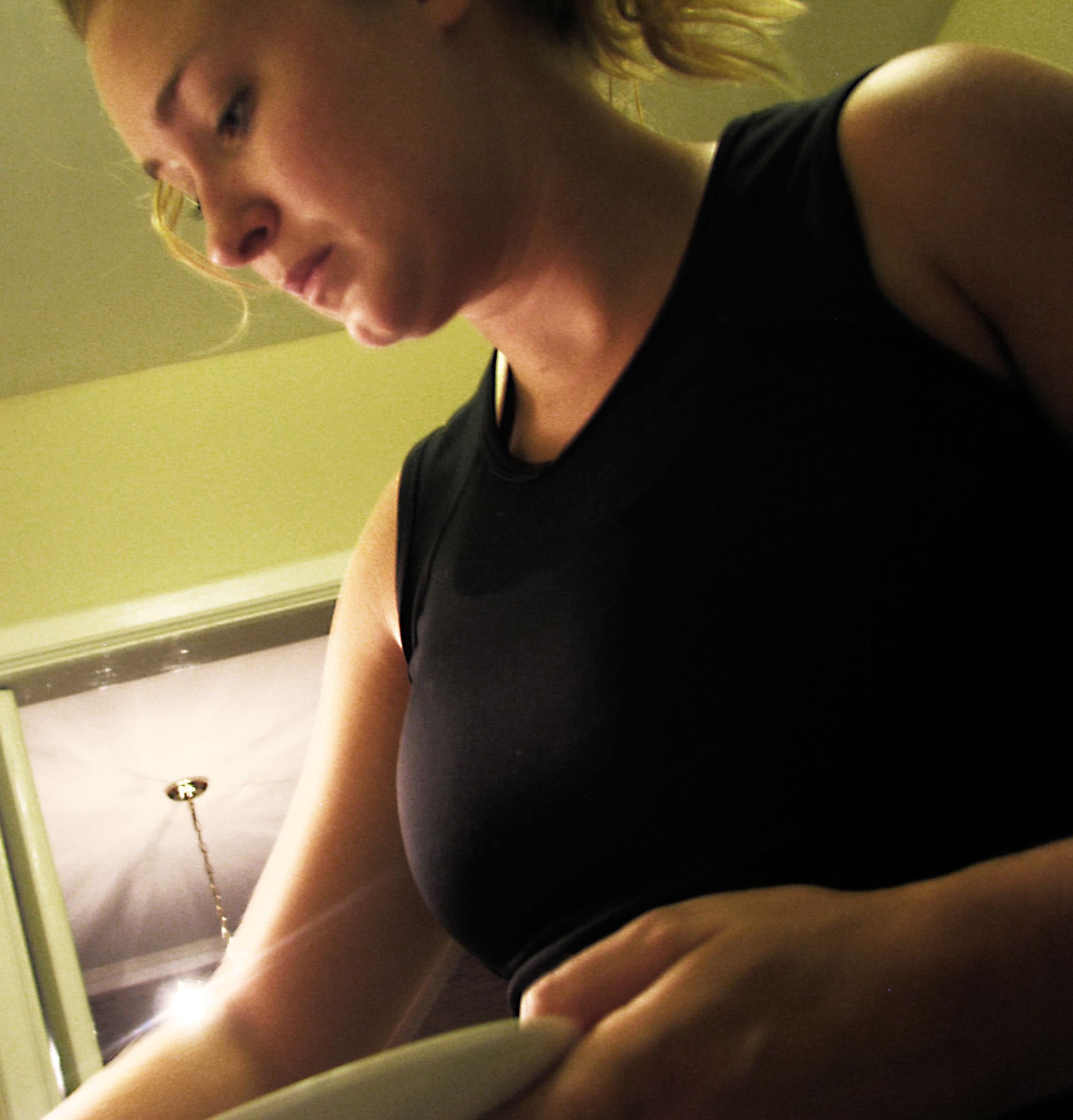 At least I can cook.

Now, slice the zucchini into planks and grill it - it won't take long, maybe 3 minutes on each side to get brown but not too soft. 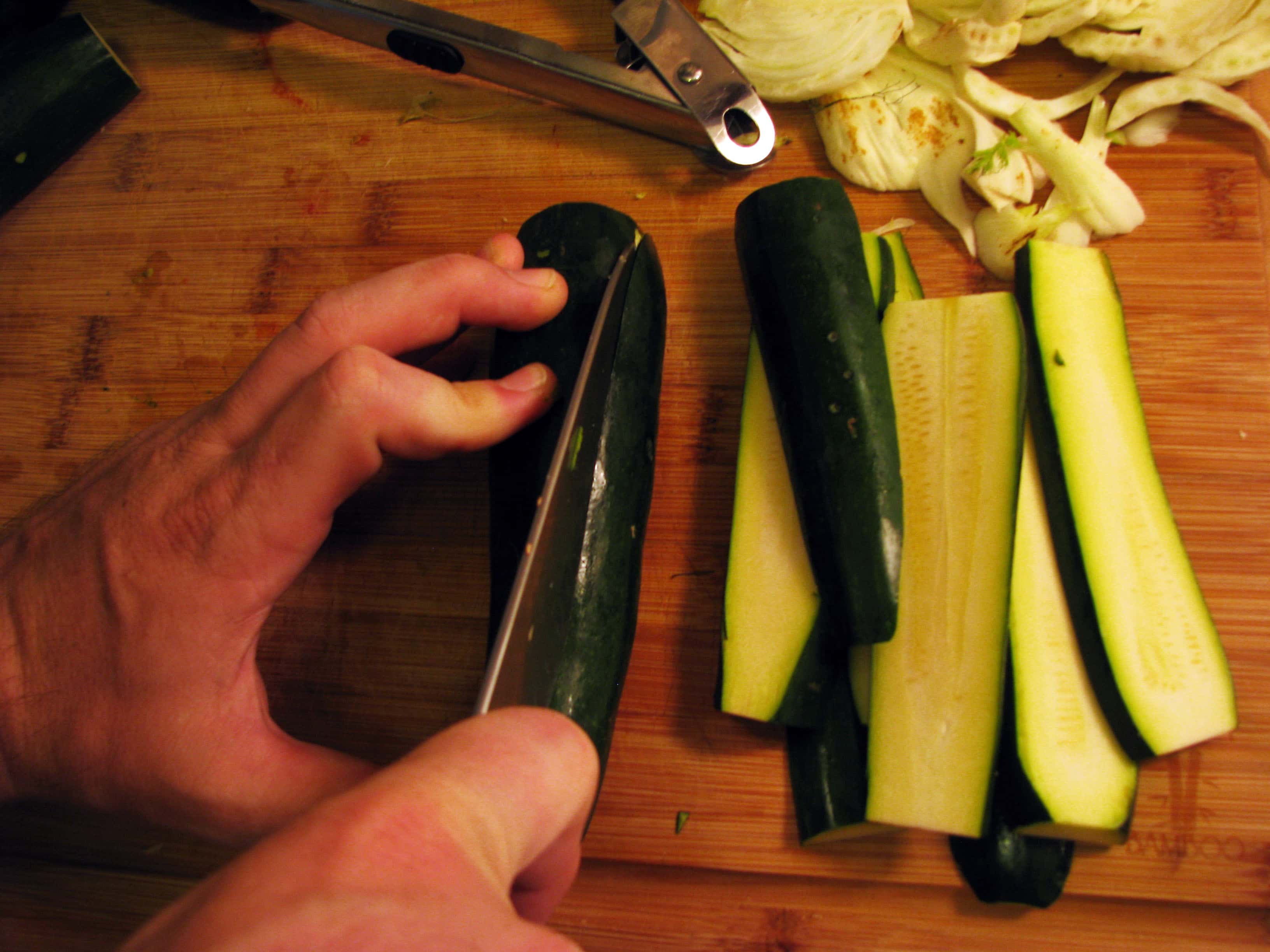 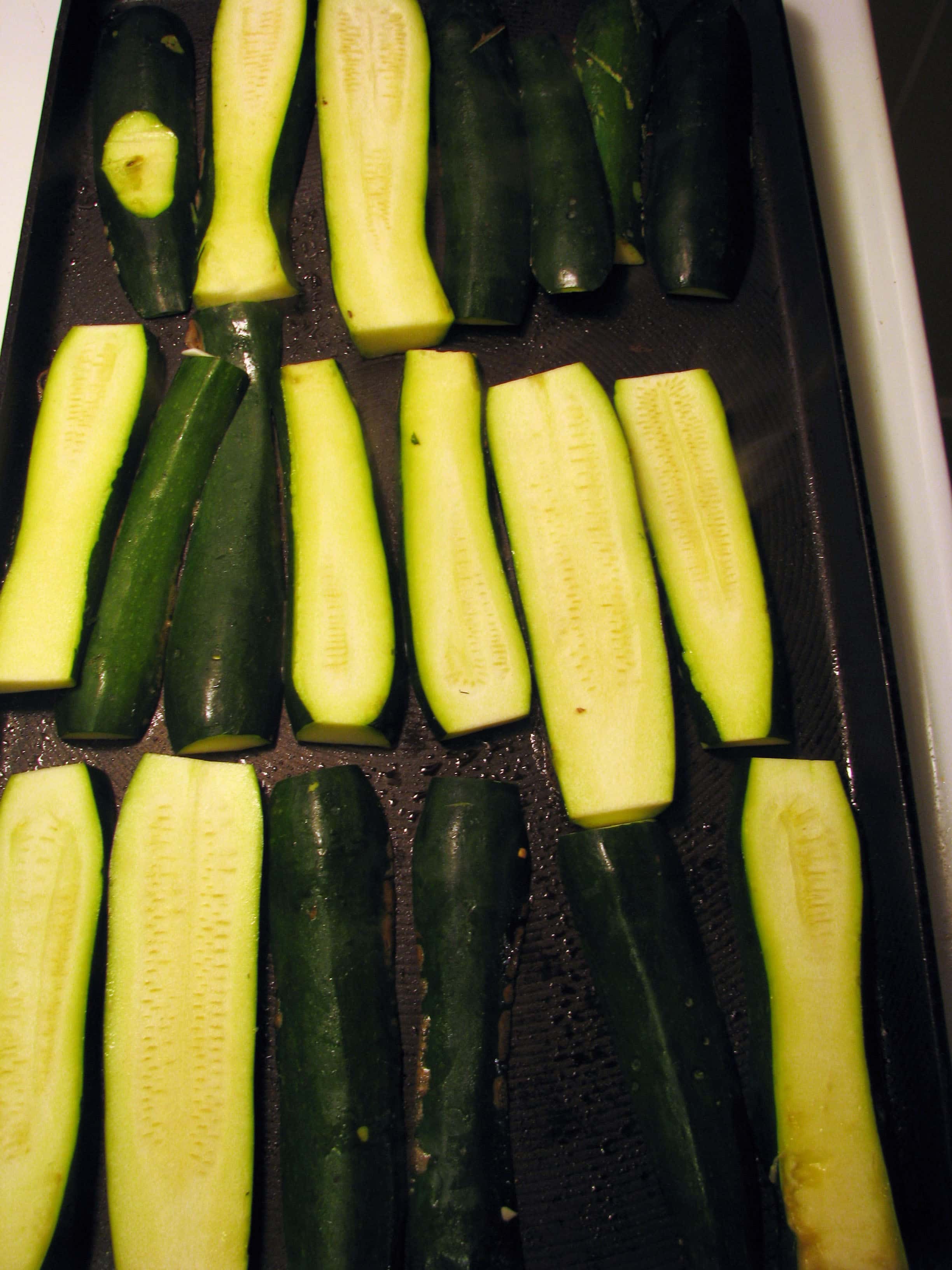 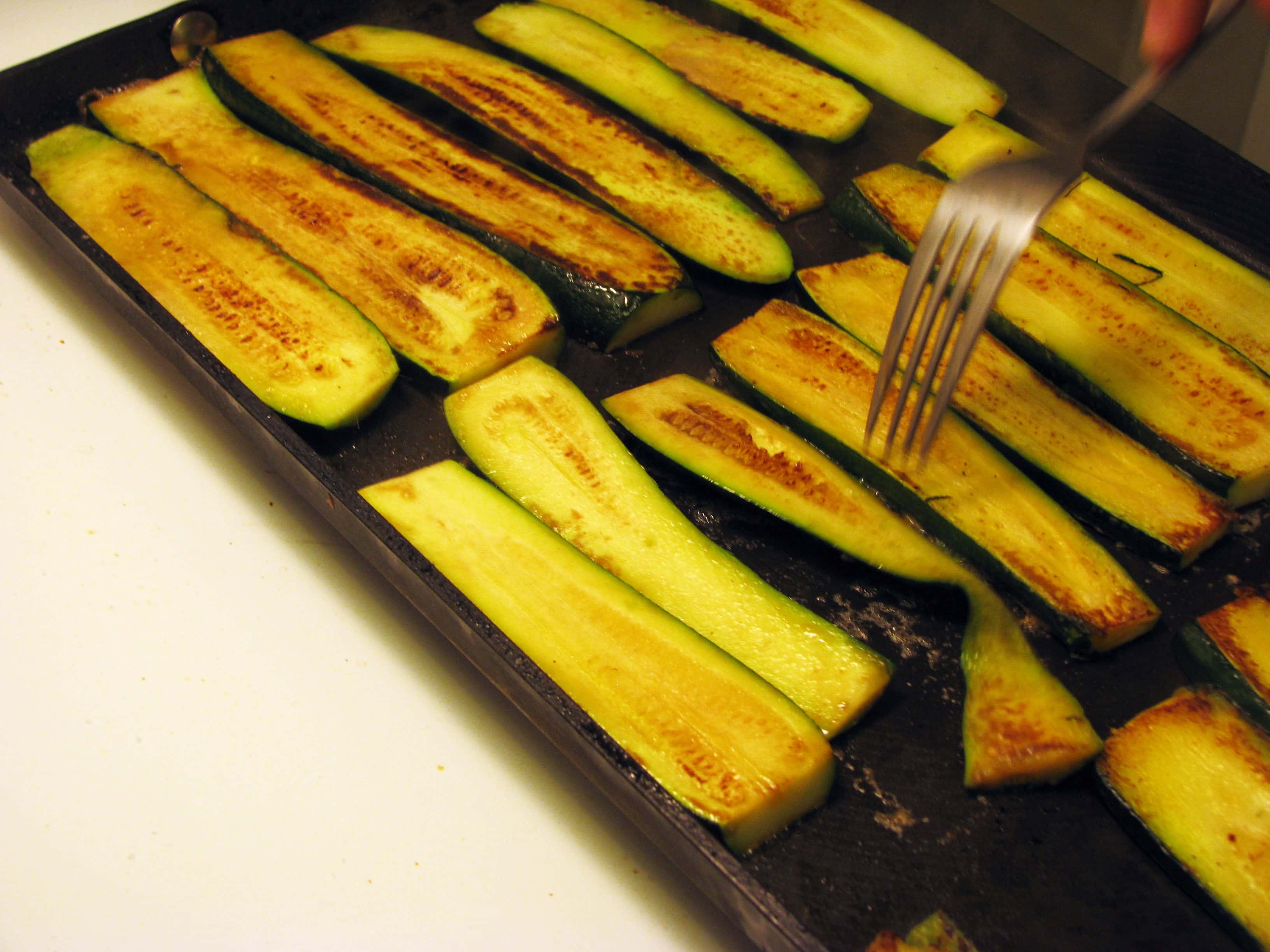 Now, we have three sets of grilled veggies, one for each layer of the dish. 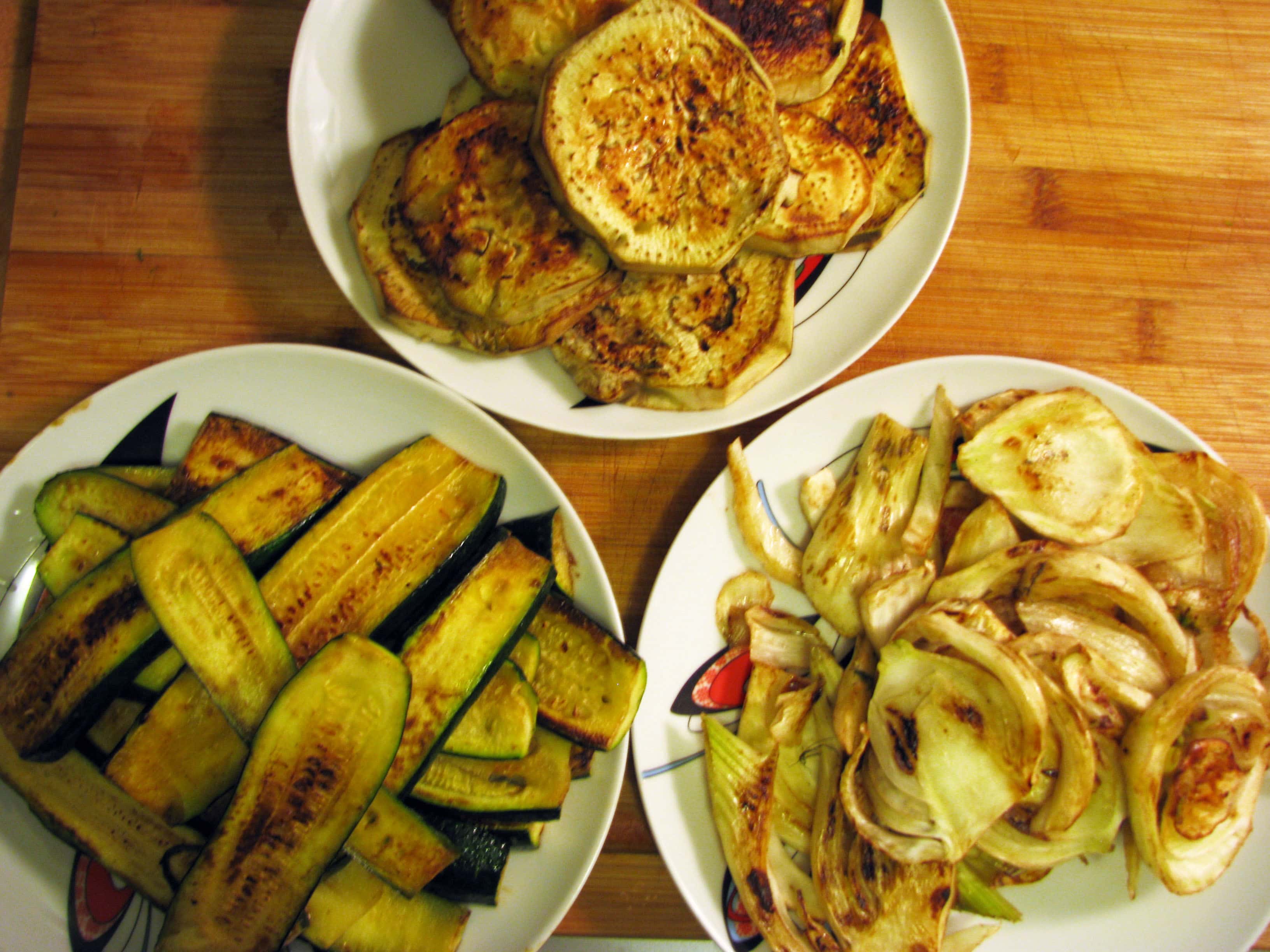 Yum!  Now, let's start layering.  Grab your mozzarella and tomato sauce!
s
First, spray your pan and spread a thin layer of tomato sauce in the bottom of the dish.
s
If you're going to bake this right after you assemble it, turn the oven to 375F. 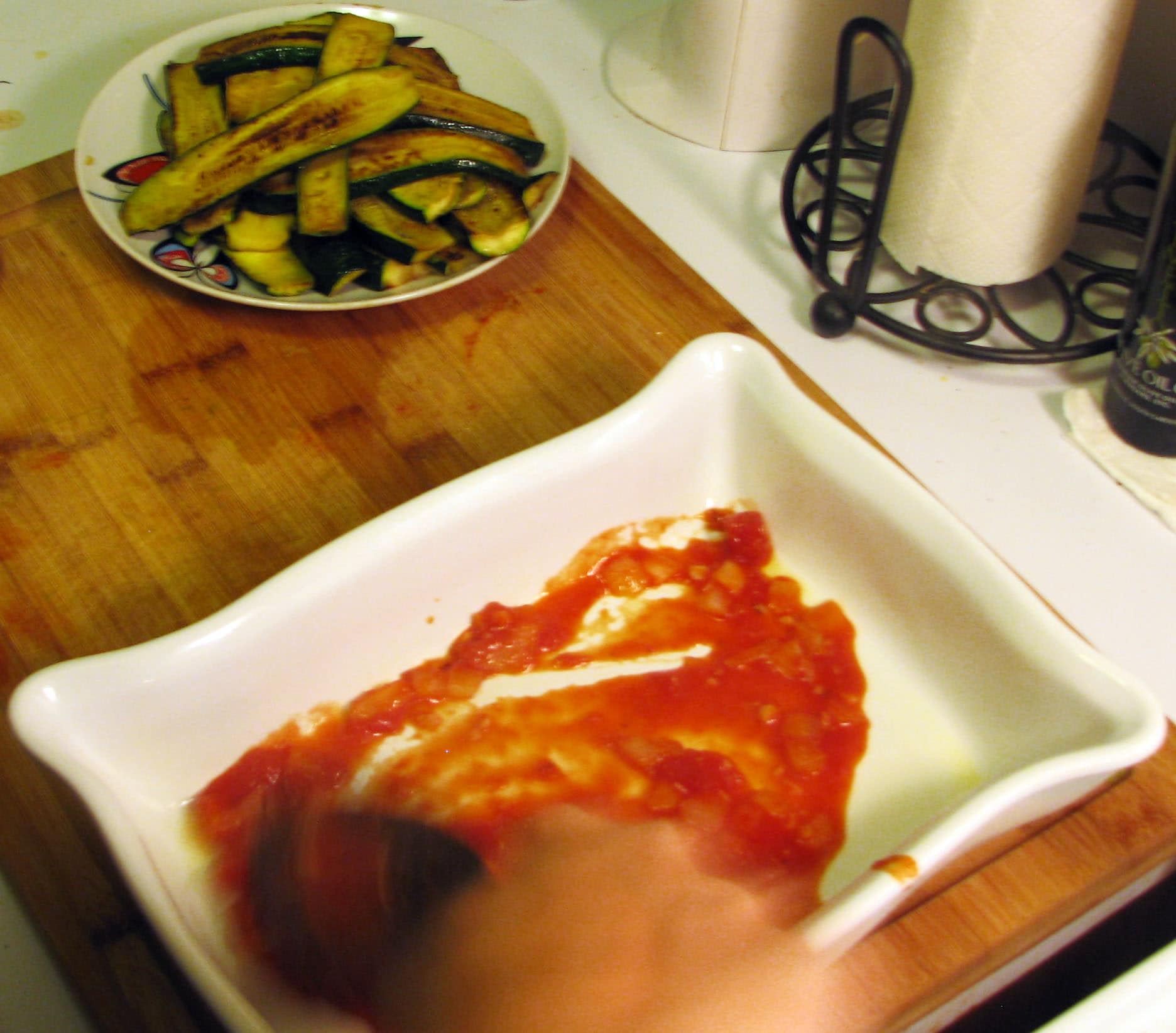 Then, layer all your zucchini in a flat layer with the pieces overlapping. 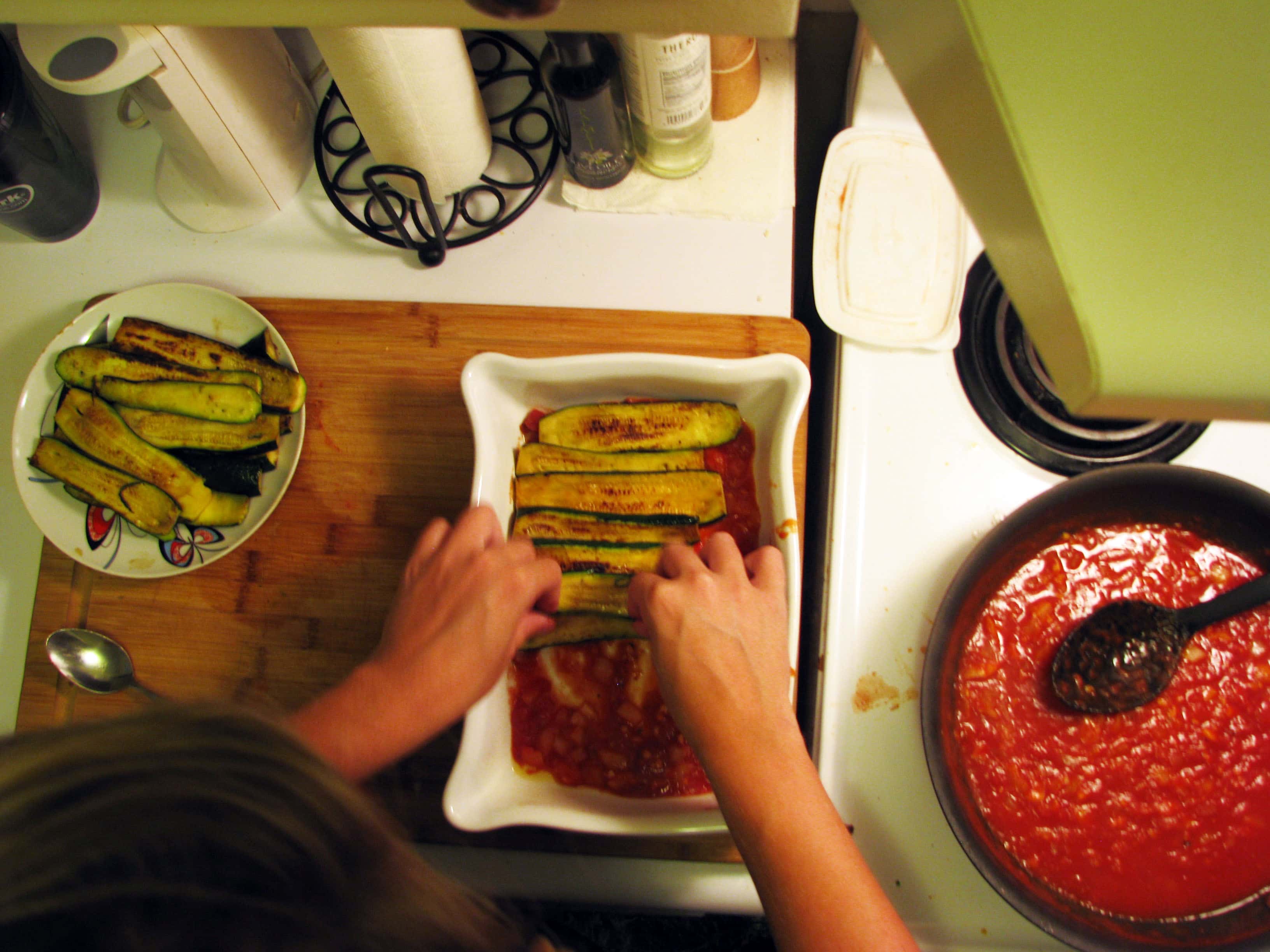 Cover the zucchini with cheese....

And put a layer of sauce on top of the cheese. 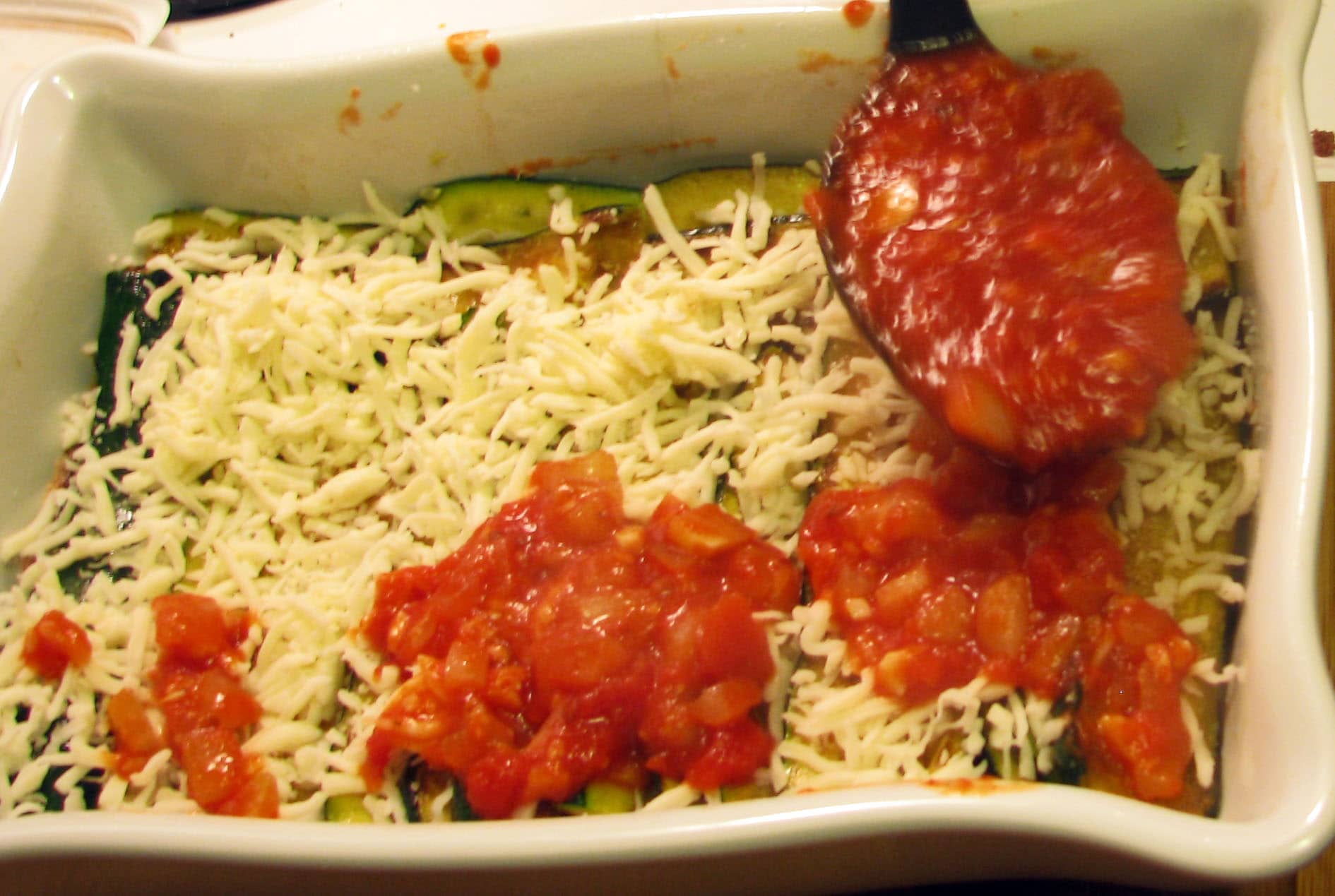 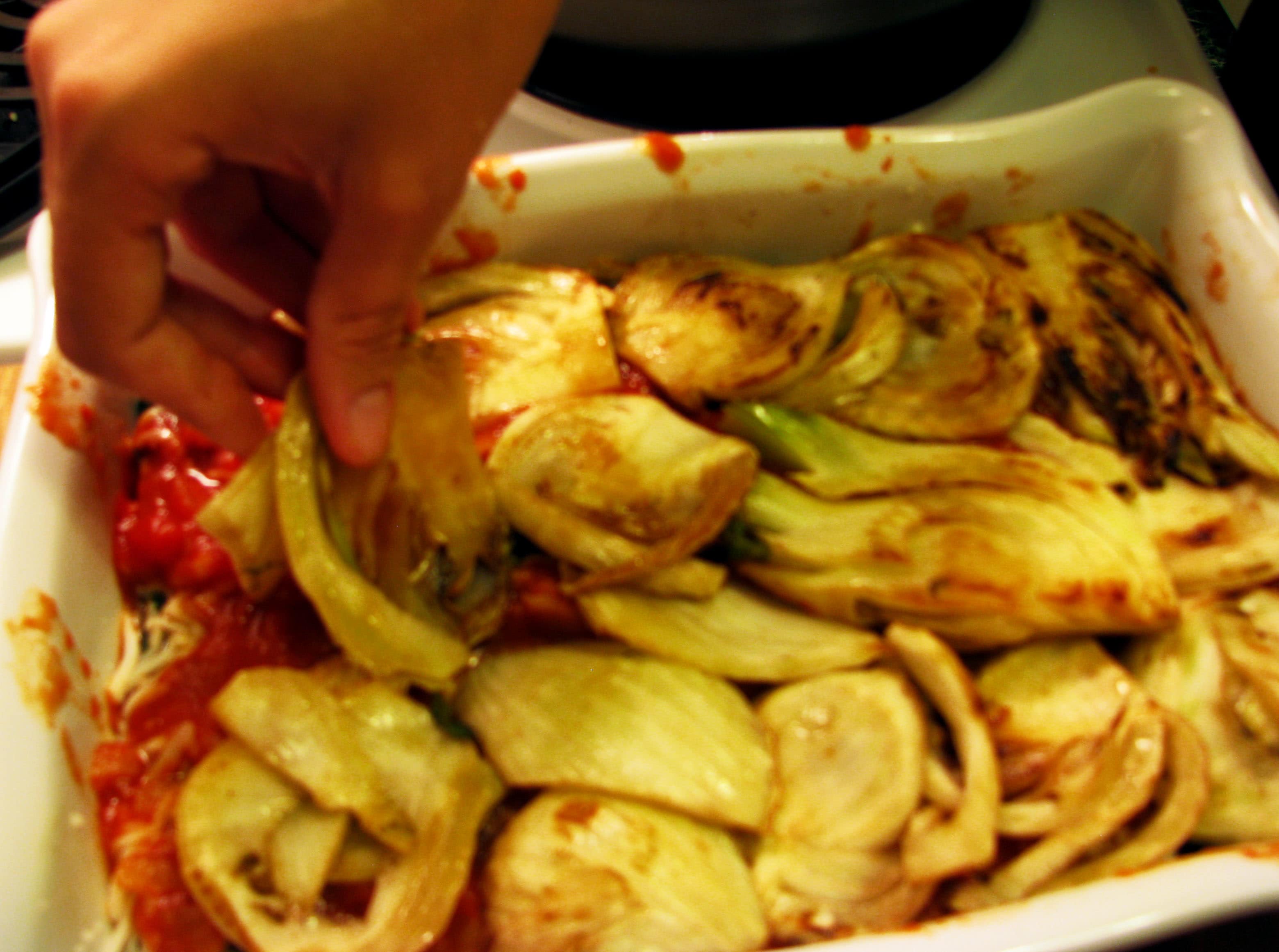 Then cheese, then sauce. 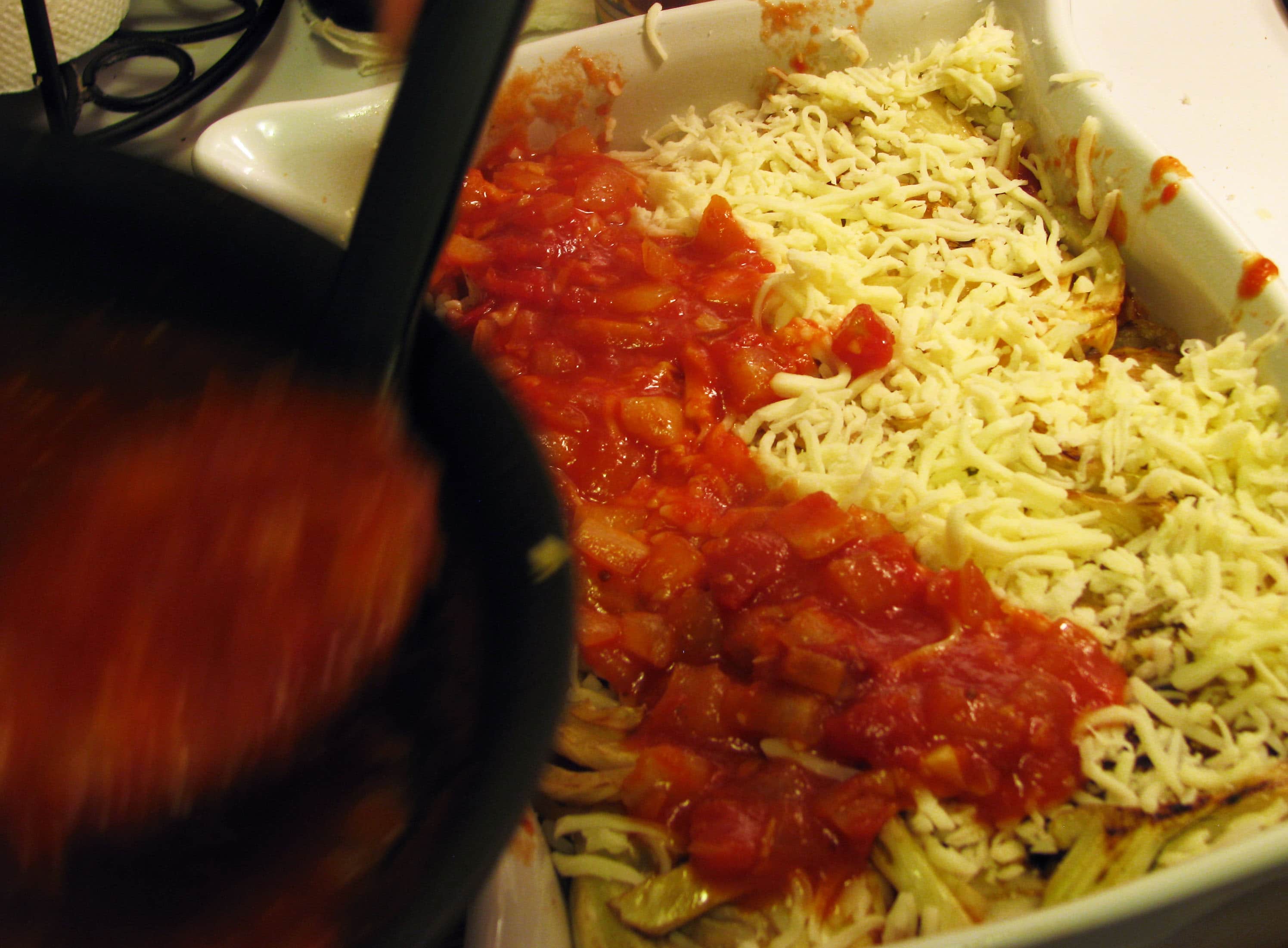 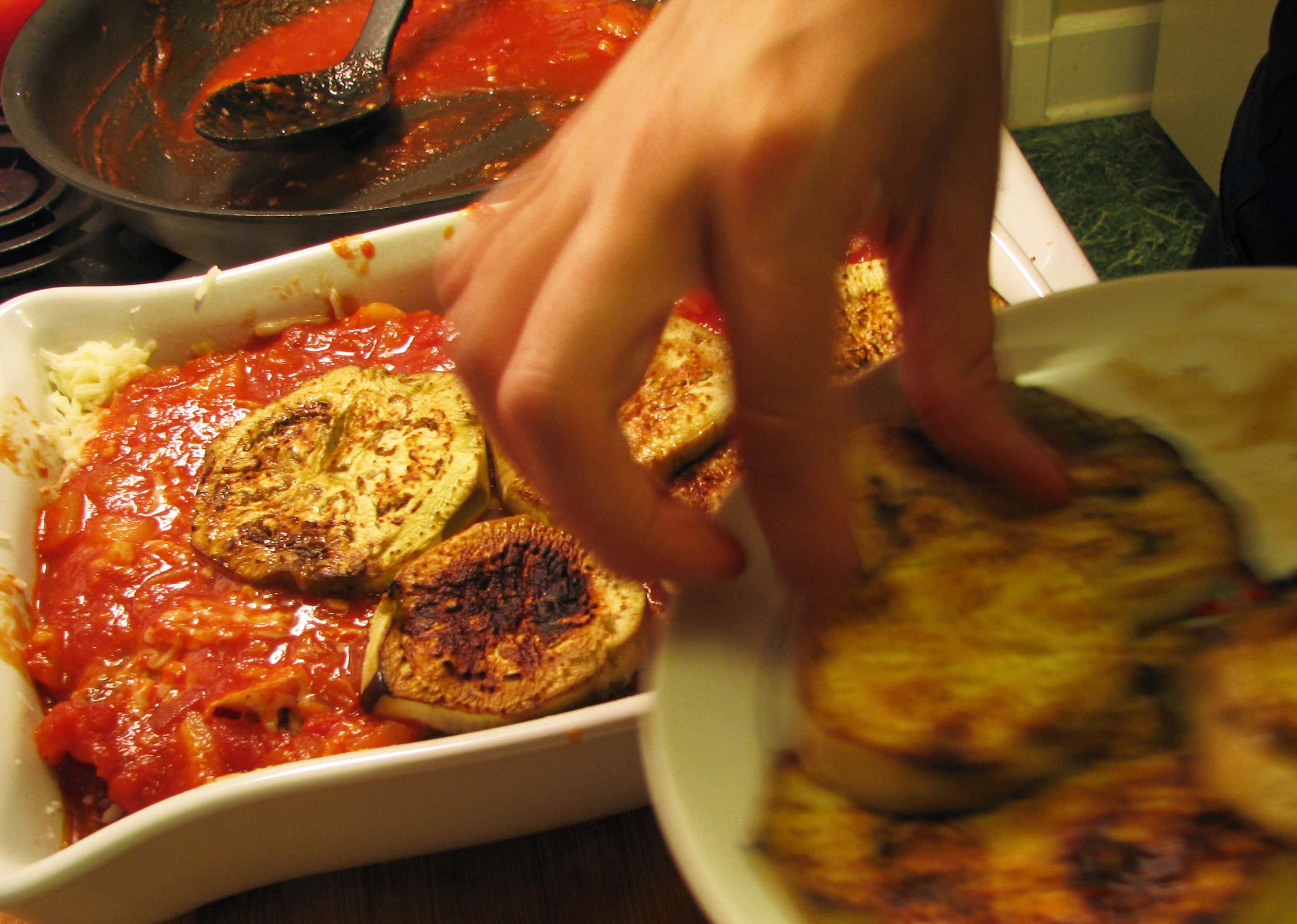 Then cheese, then sauce, then... 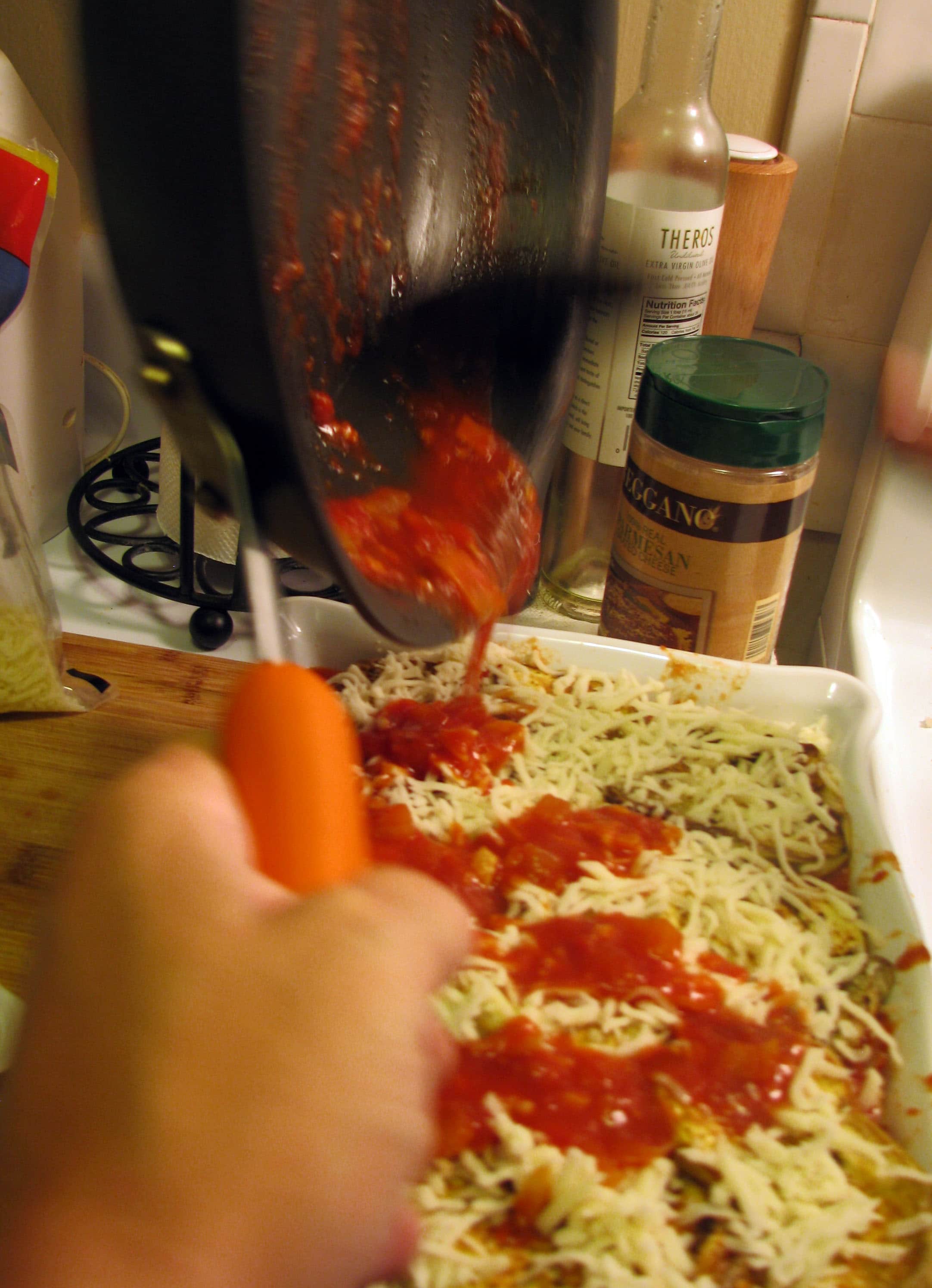 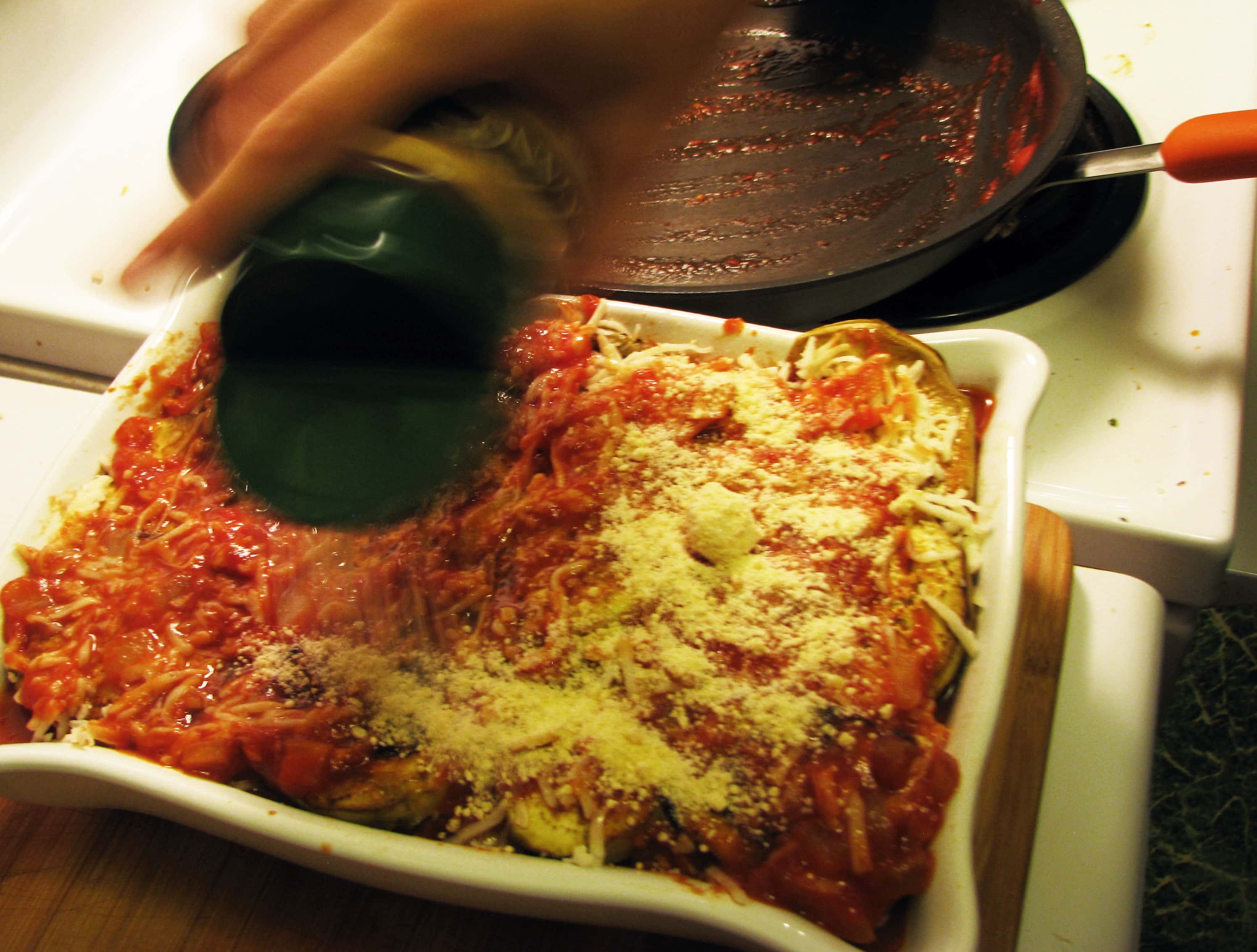 Now, you can keep this out for awhile, or stick it in the fridge for a few days, or cook it RIGHT NOW for 30 minutes at 375F until the top is brown and crispy. 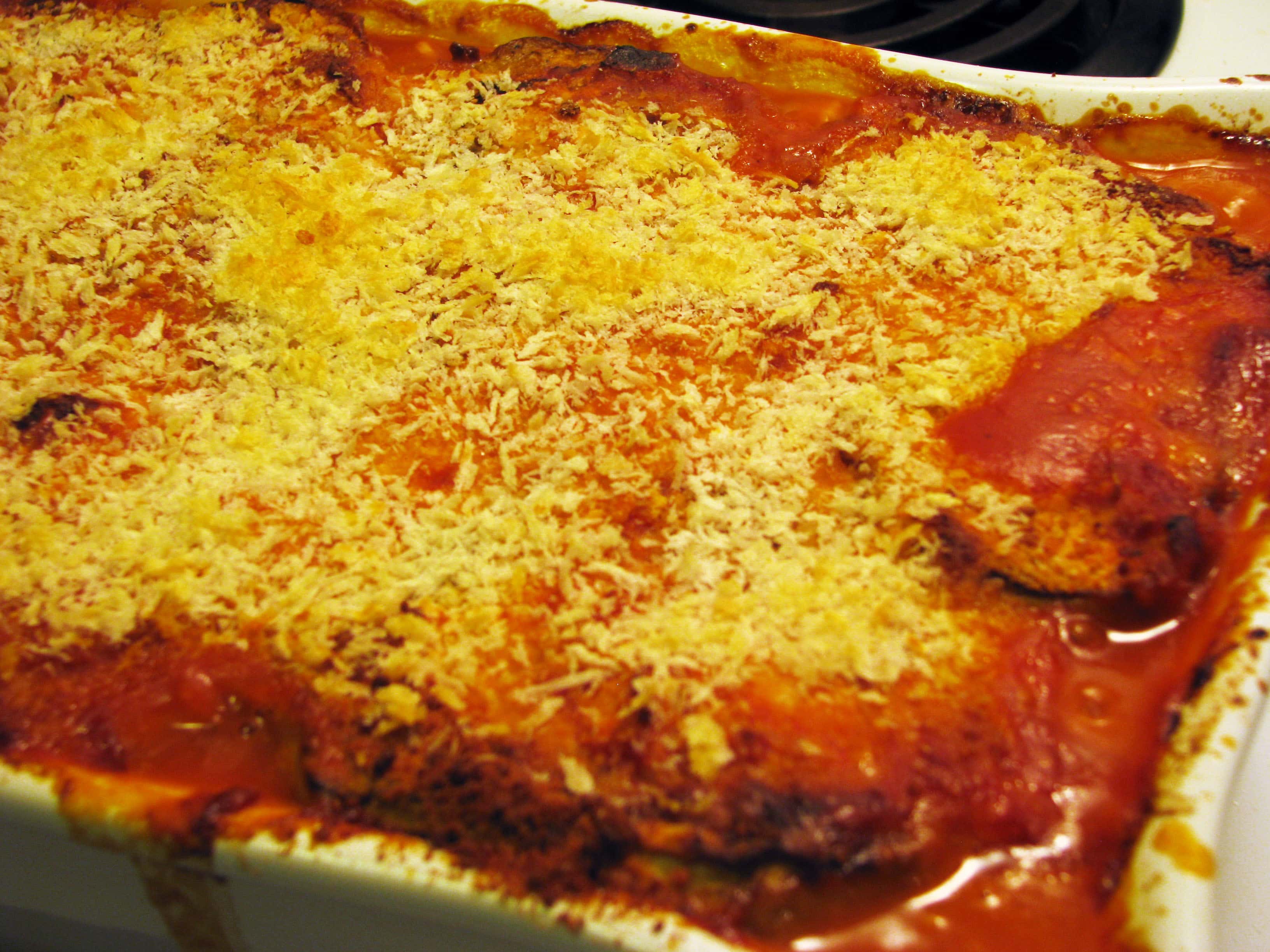 Now, this is fabulous.  It's saucy and cheesy and has vegetables.
s
Calm down and let it sit for 5-10 minutes so the sauce can thicken a little bit and the vegetables can set.
s
Slice it like lasagna and serve it with noodles or crusty bread or BOTH.  If it falls apart don't worry - the taste doesn't change.  Don't forget wine! 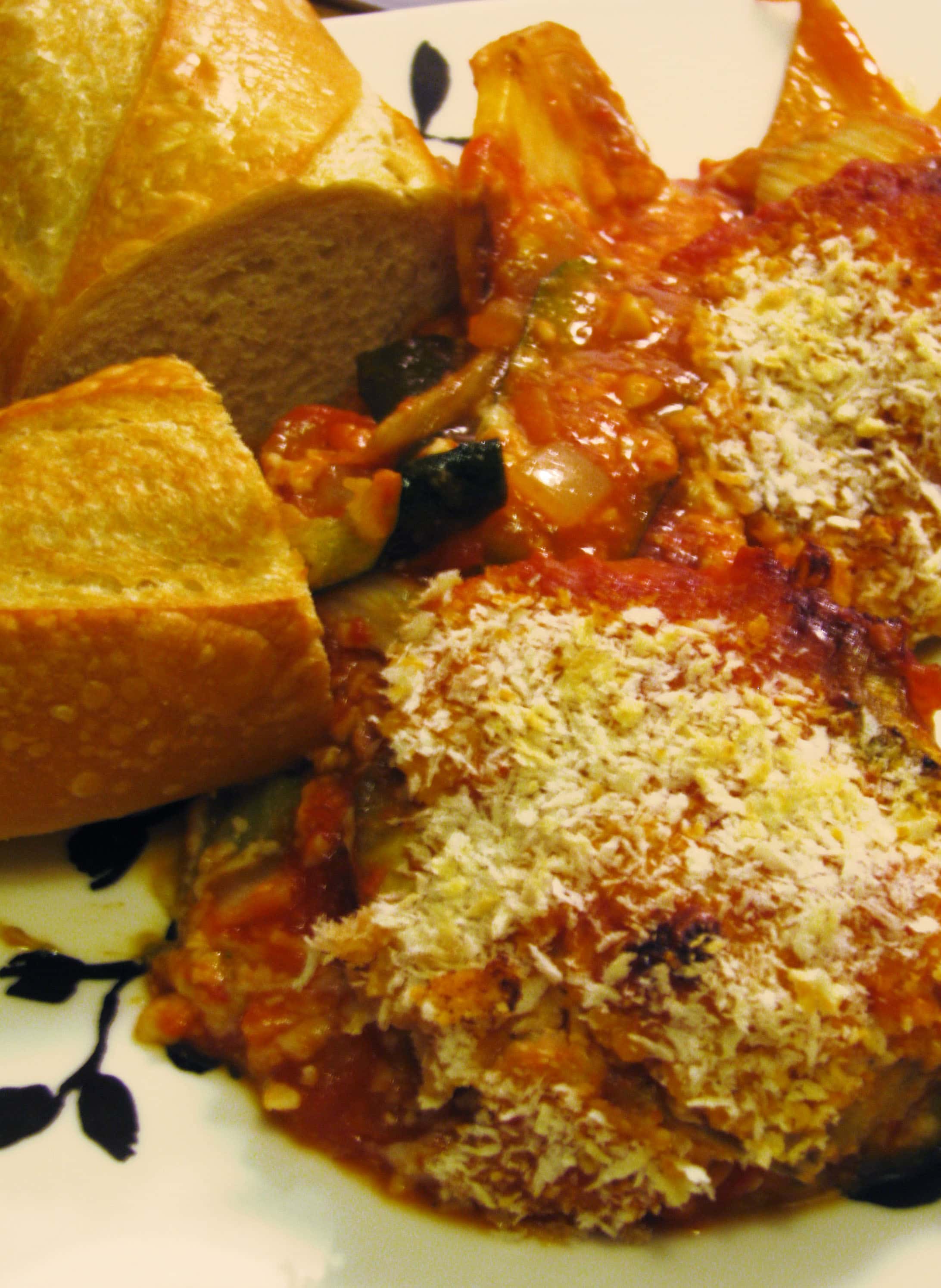 Note: I saw this recipe on TV and made it my own.  Watch it here!
s
Oooohhh a Variation: Make it Greek!  Add a layer of drained artichoke hearts, use half feta cheese and half mozzarella, and add ½ cup sundried tomatoes and ¼ cup chopped olives to the marinara.  YUM!
Previous Post: « Prepare Yourself...
Next Post: Guess Who's Coming To Dinner? »