This is a big thing for me. 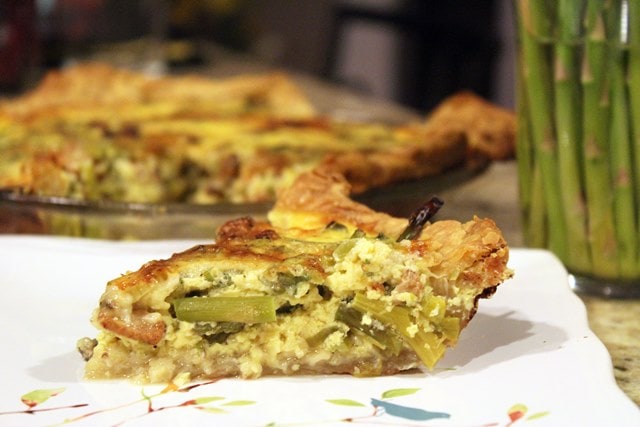 BUT, my mom used to make quiche all the time when I was little so it's kind of a thing in our family.  And THEN our friend Matt brought us some eggs that his chickens laid.  And I wasn't going to use fresh eggs in brownies or something dumb.  AND THEN I had some sad asparagus that I wanted to use.

So I made quiche.  With bacon too.

I loved it!  I knew I would like it but...this was REALLY good.  I think I'm going to stop hating quiche.  The sharp cheese and fresh eggs and bacon .... OH.  You need to try this ASAP.

You need three eggs, a cup of milk, two slices of bacon, some asparagus, a sheet of puff pastry, some sharp cheddar cheese, and scallions.  Easy stuff. 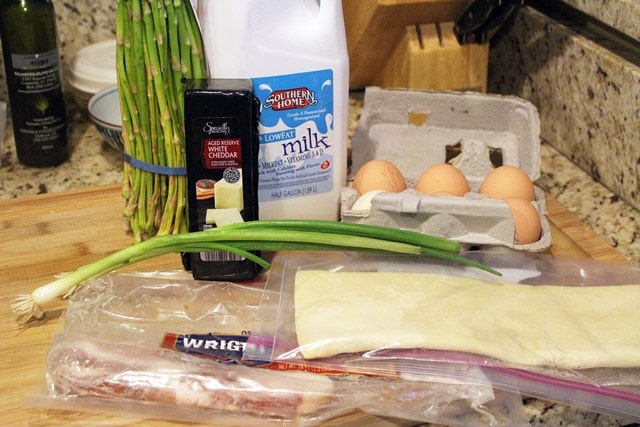 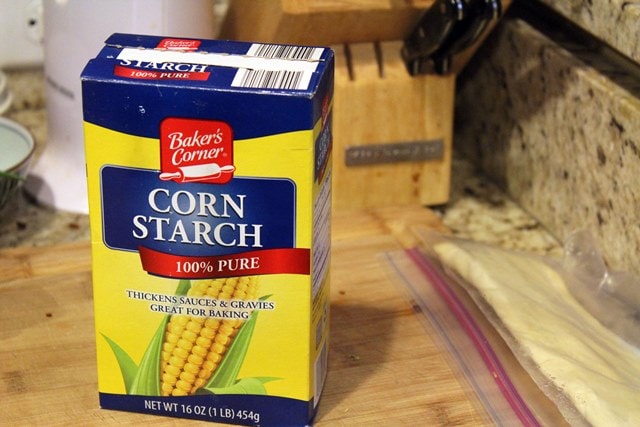 Let's start with the pastry.  Preheat the oven to 425F.  I baked the crust halfway on it's own so that it would be nice and crispy, which was a good idea BUT I didn't use pie weights or beans or anything, and the crust didn't hold the shape of the pan so....use pie weights or beans for this step, pretty please.  Just stretch the crust over a 8-inch or so pie pan, then weight it down with a slightly smaller dish filled with dry beans or other weights.  This is a pretty small recipe, so don't use a massive pie plate - a shallow one will be perfect.  Bake the crust for 10 minutes until it just starts to puff on the edges, then take it out of the oven and let it sit while you get everything ready.  Reduce the oven heat to 375F. 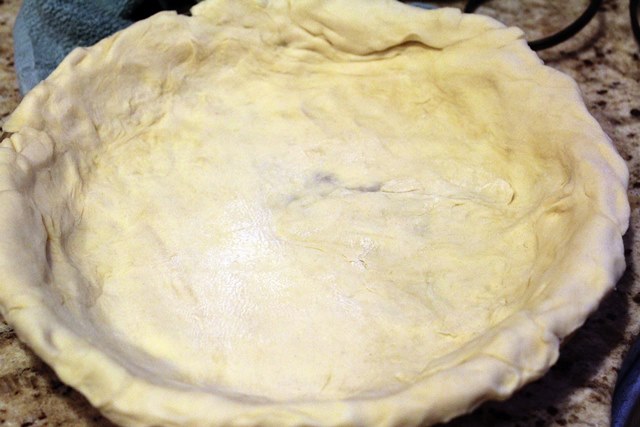 Now, onto the filling!  While the crust is starting to bake, cut some bacon into small bits.  I used 2 slices because they were super thick, but 3 or 4 regular slices would be just fine. 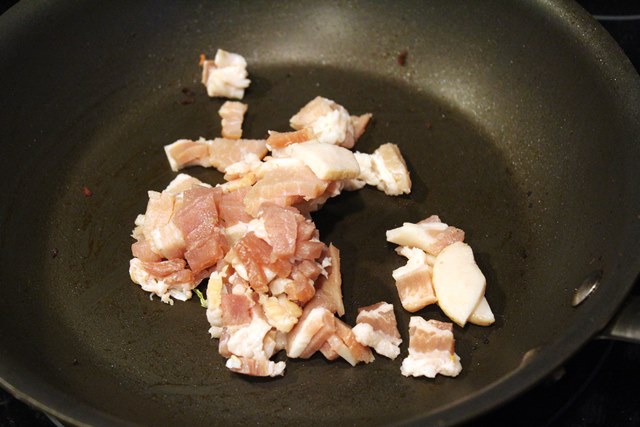 Cook the bacon in a skillet over medium heat until it's nice and crispy, then drain it on paper towels! 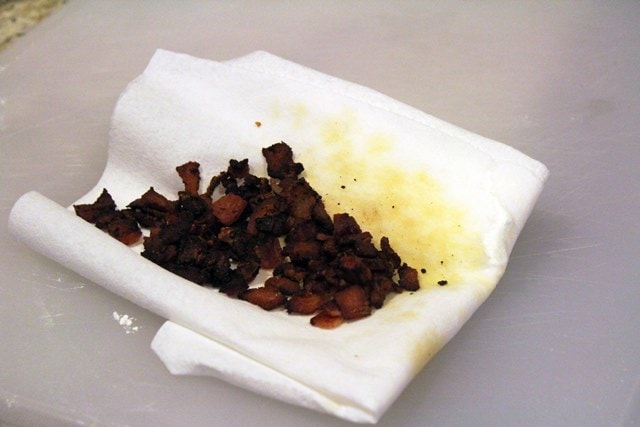 For the asparagus, I used 10 stalks or so - we want to end up with a cup of chopped asparagus, cut into 1-inch-ish lengths. 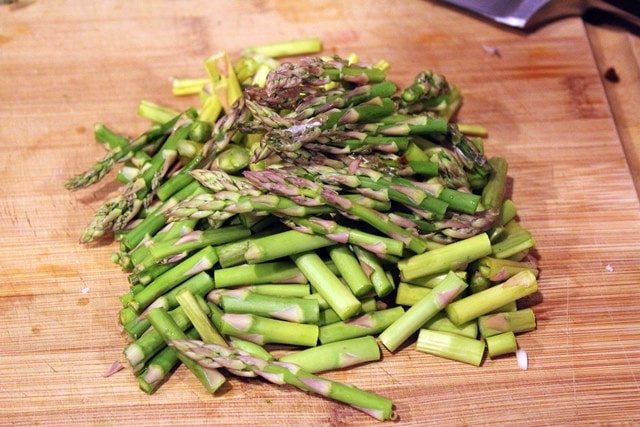 Cook it slightly by bringing a few inches of water to a boil with some salt in a pan (I used the bacon pan, but you could use two separate pans for this to make it go faster), then boil the asparagus for 2 minutes until it's REALLY bright green. 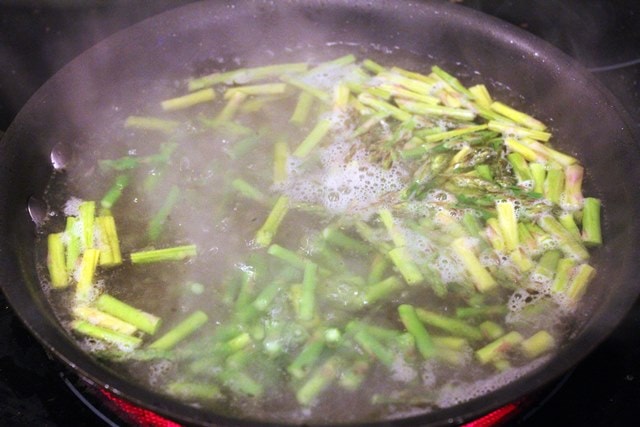 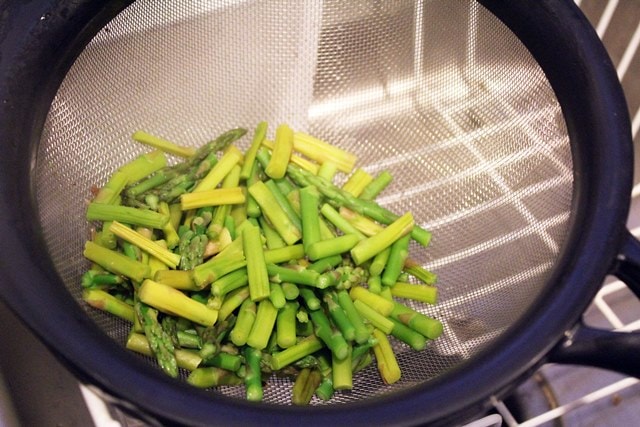 Then, thinly slice the scallions. 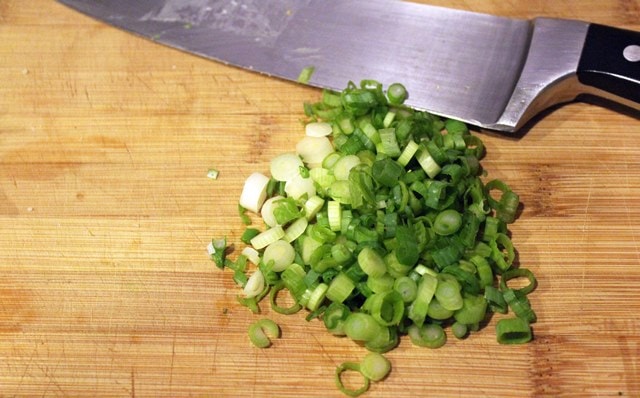 And grate the cheese! 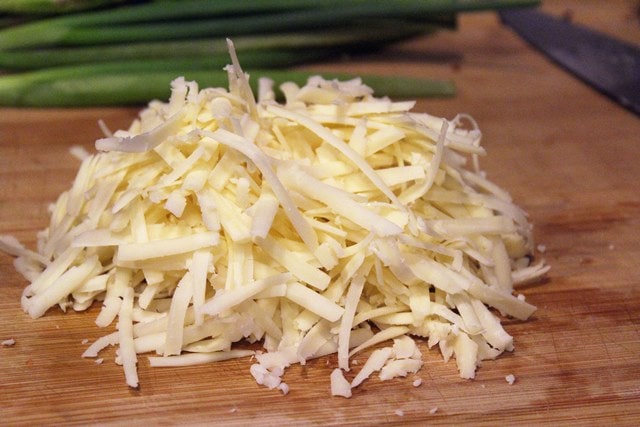 Mix the cornstarch into the milk, then add the eggs and milk mixture to a large bowl. 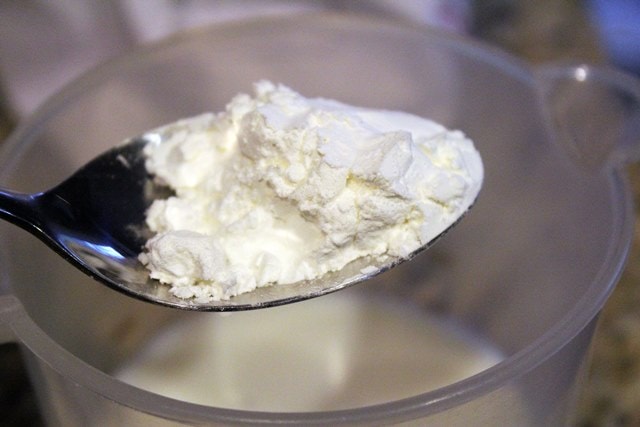 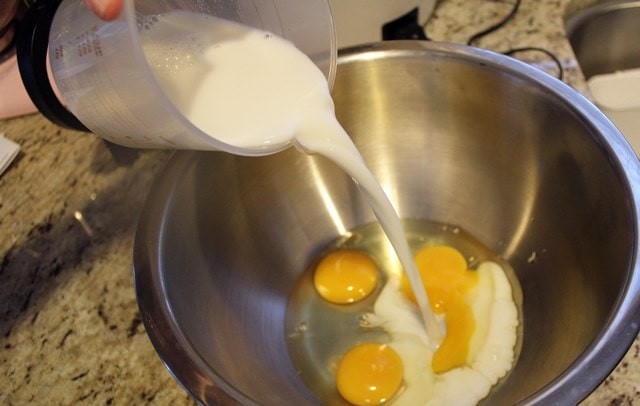 Add the bacon, scallions, half the cheese, a bit of salt, and lots of pepper. 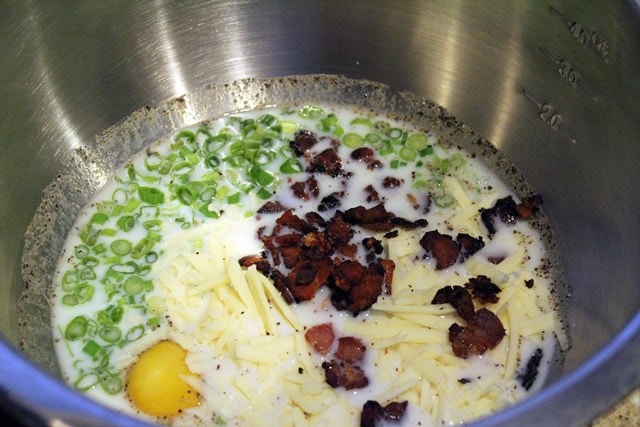 Then, whisk the filling together! 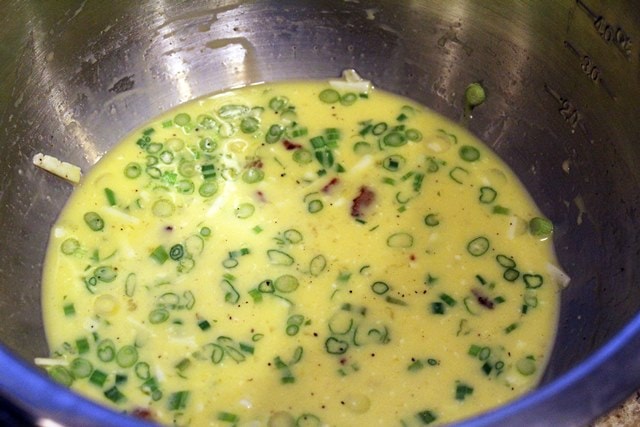 Now, grab the partially cooked crust.  Add the remaining cheese to the crust, to form a barrier between the egg mixture and the crust - this'll keep it from getting terribly soggy.  Top the cheese with the asparagus. 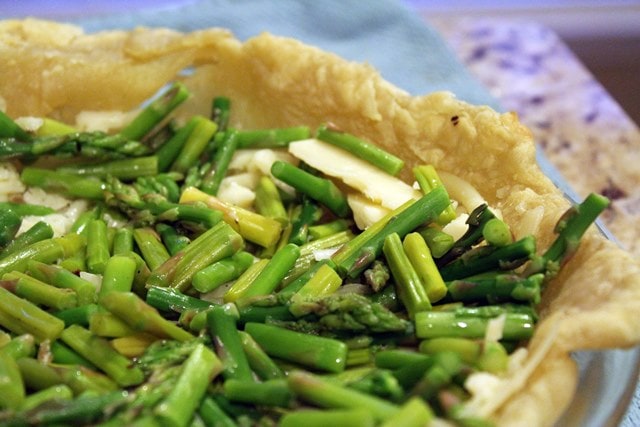 Then, pour the egg mixture all over everything. 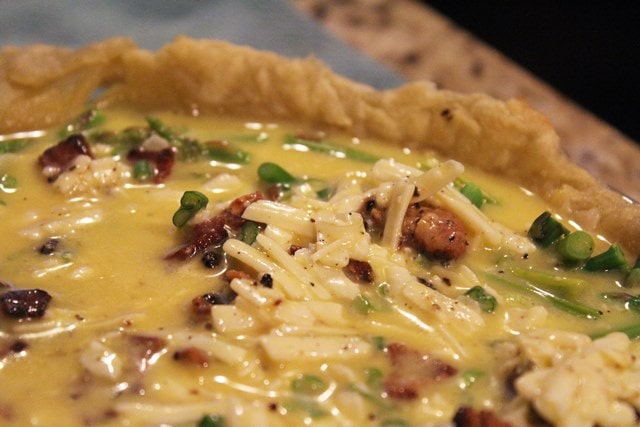 Now, cook this thang.  20 - 30 minutes until totally set, no jiggles in the middle, and the crust is nice and brown. 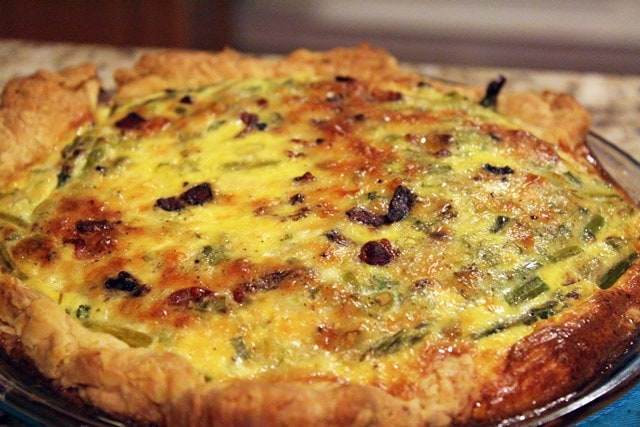 My crust shriveled under the egg in places.  Whoops.  You know what?  Who cares.  I'm not cooking for the queen.  I'm cooking for my family, and it still tasted great. 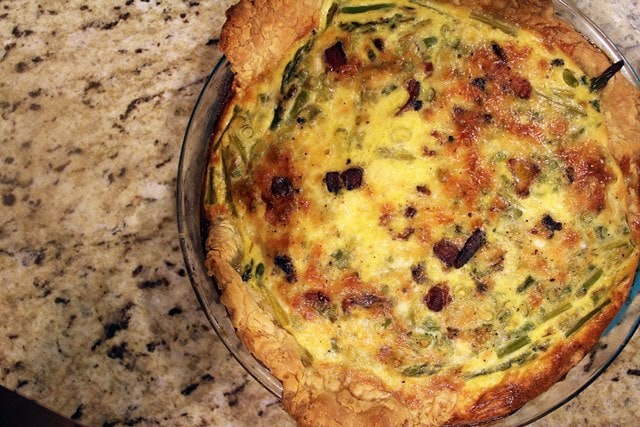 Let the quiche set for at least 10, preferably 20 minutes, to cool slightly and firm up.

Then, cut it into wedges and serve!

That's it, kids.  You'll love this.  The tangy cheese, smoky bacon, buttery crust...AH.  Seriously.  This is a super fun dinner, but brunch, lunch, snack....this is great for all the times.  Try it soon! 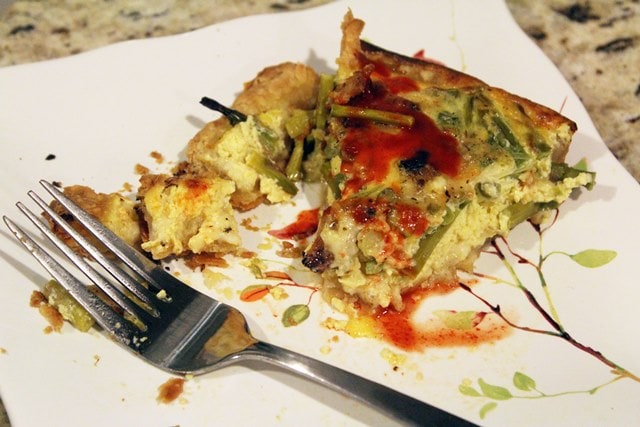 Also.  Hot sauce over the top is never a bad idea.