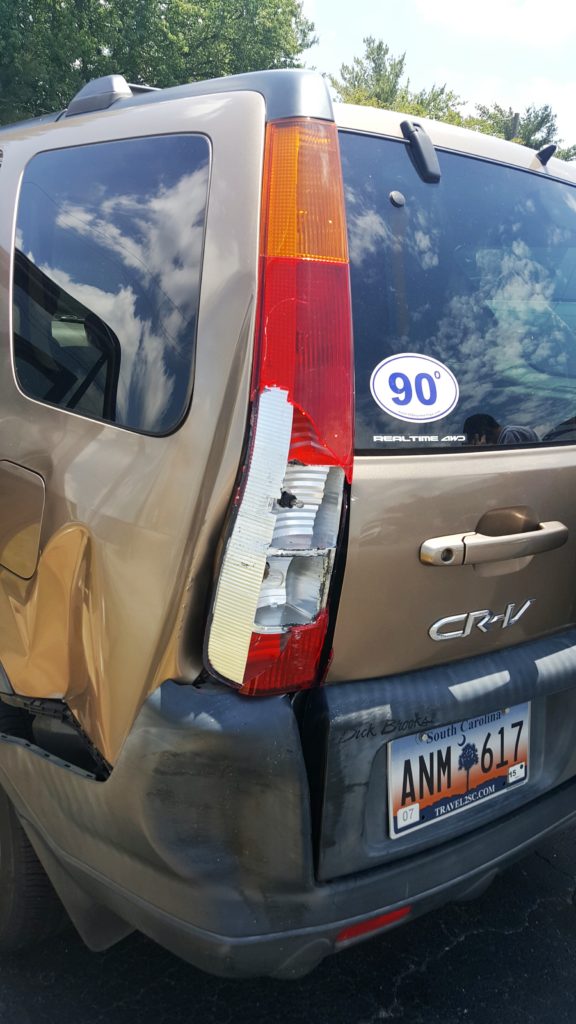 Let me cut to the chase with the important details:  Beck and I got rear-ended last week and we are totally fine.

This of course came on the worst of all the worst days; Beck hadn't been sleeping well and we'd had a misunderstanding about how much pumped milk she was supposed to be drinking on an instance when I was gone, so we ended up with not enough pumped milk for me to go to to work the following day.  So, I woke up every 90 minutes all night to pump, nurse, comfort, and say really gentle curse words to my child.  It makes me feel better, leave it alone.

So I was tired.  The tired now is worse than the tired at the beginning; it's been going on for a long time and I'm back in the real world with no naps or long sleepy mornings, but Beck hasn't gotten that memo.  So to reward ourselves we were going to go have lunch with Jay.  Because yay!  Buttttt then getting off the interstate some guy nailed me in the ass.  Hehe.  No but really, I stopped at a red light on the exit ramp, he thought I was going to ease forward and go right (I couldn't there were cars coming), so he gunned it and slammed into my car.

I knew as soon as it happened that we were totally fine, but my tired brain just started crying.  I drove to a gas station to get out of the way and the guy followed me, and I got out of the car just LOSING IT.  I immediately yelled "What were you DOING?  Were you TEXTING? I HAVE A BABY IN THE CAR!!"  I don't think he was texting, but I'm still unclear as to why he thought it was his turn to go.  Moron.  He also seemed super baffled that the baby was part of my argument since she was fine.  Clearly he doesn't have children.  So we sat in the heat for an hour instead of having our lunch date, but luckily my car was driveable so we were home a few hours later.  Kill me.  I did compose myself about 30 seconds after the meltdown and apologized to the guy for being super nuts, but he just kept his distance after that.

And look at the picture!  The damage doesn't look bad at all.  Except that it's an old car, and we got hit on the corner.  So the back bumper, side bumper, back panel, and side panel all will have to be replaced.  Which will come to very close to what the car is worth.  The other guy's insurance ultimately gets to decide whether or not the car is totaled so we'll see, but suffice it to say that a new car right this instant was not in our life plan.  But, is anything?

Anyway, if you're selling a CRV I want it because I honestly have no interest in car shopping and I like Hondas and need a tall car because carseats.  And since it's Monday and you never know when someone will hit your car while not texting, get yourself a sugary coffee drink this morning or a burger at lunch.  You deserve it.