Nine months in, nine months out! I haven't counted the days or weeks or however people do those things, so we're calling it close enough. 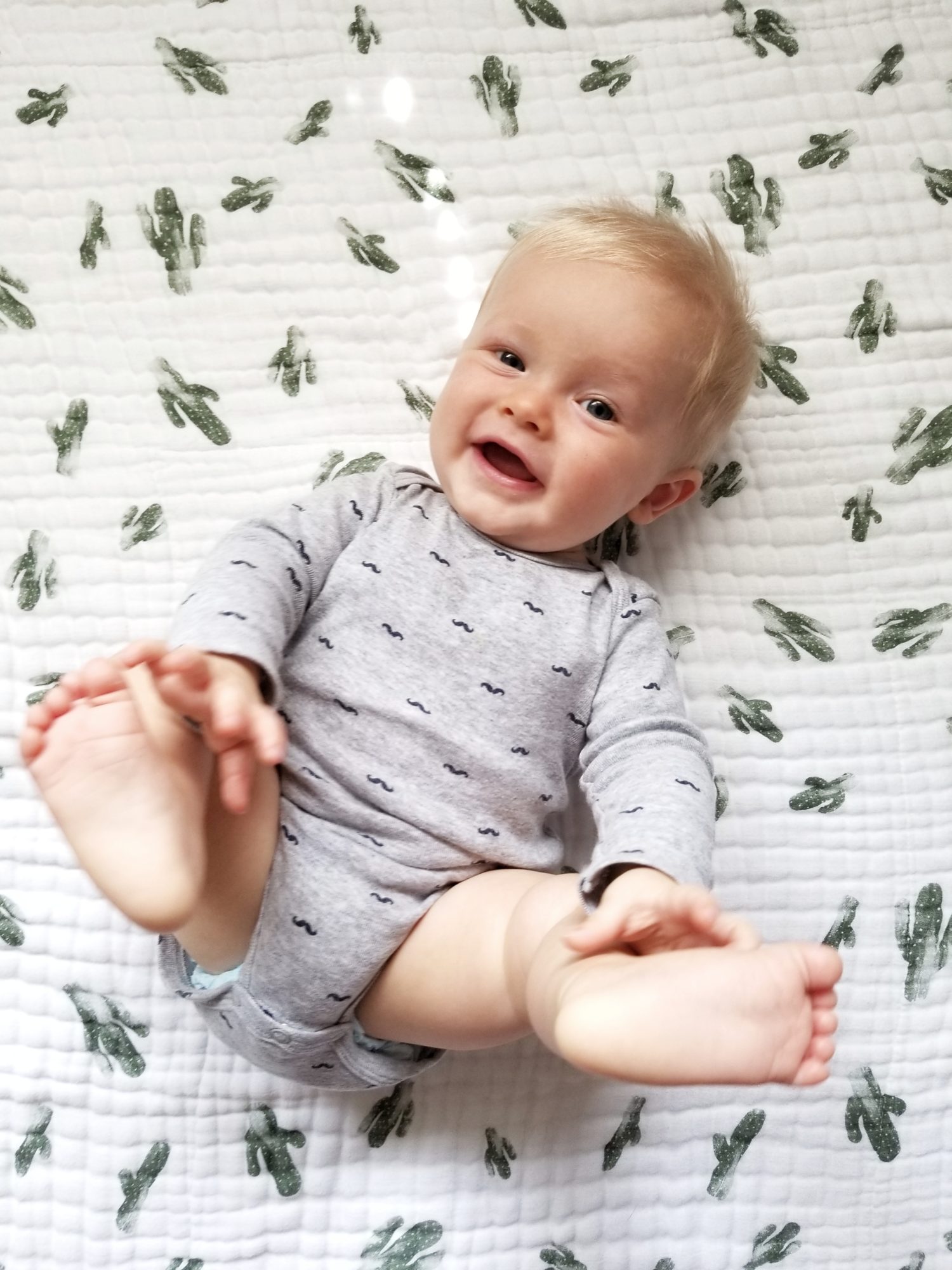 LOOK AT THIS CHUNK! Sitting all by himself for long stretches of time, getting pissy when no one gathers him up fast enough, fixating wildly on toys, and the most pleasant little demeanor all wrapped up in this tiny person.

Tiny for real, too. Homeboy is still holding down the 3rd percentile in height and weight, thank you very much. Head is too big for his body, aiding in the biological response of OMGHE'SSOCUTE!!! Which, he is. 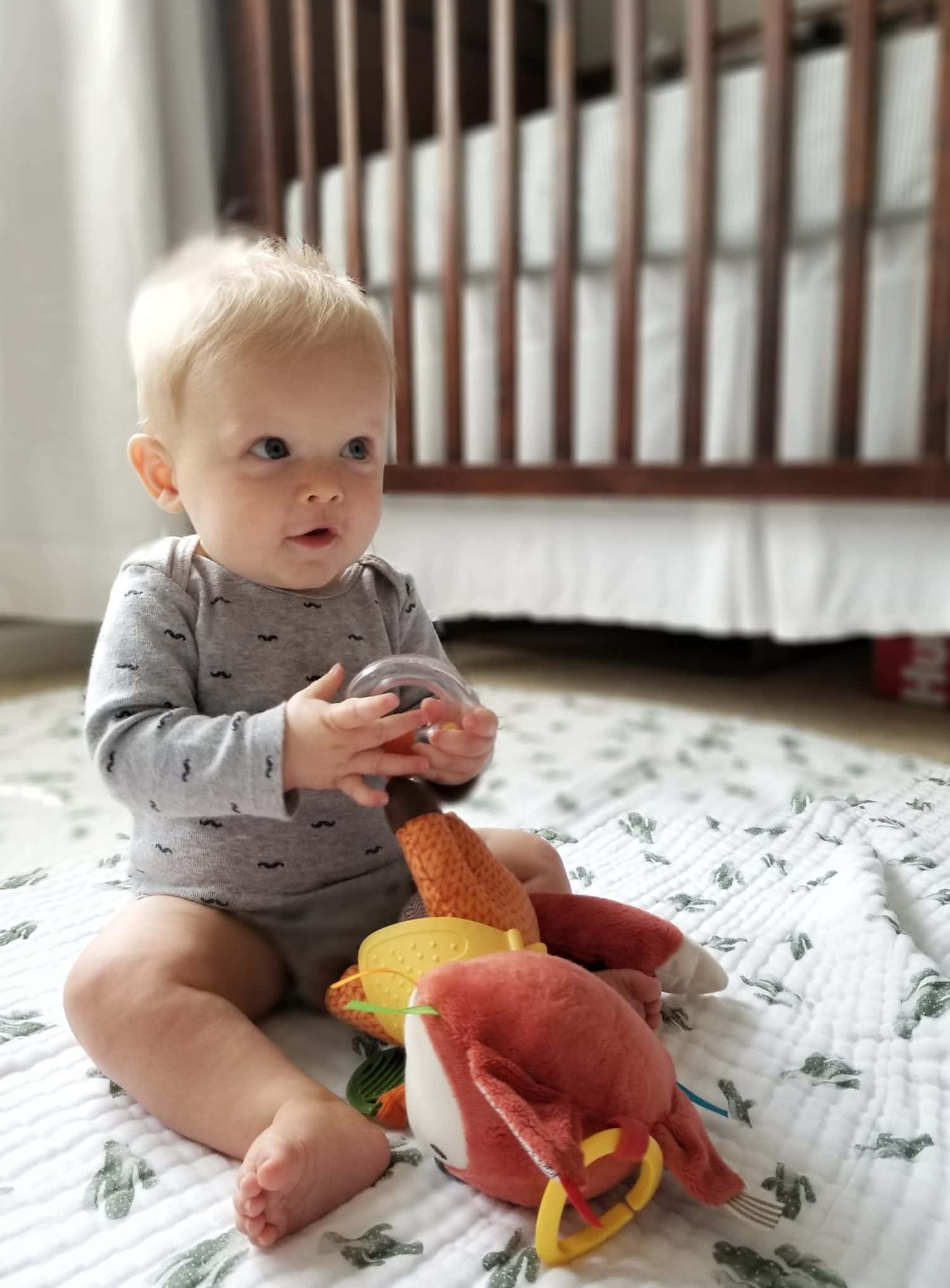 This month has brought some very serious sleeping through the night except for last night but we'll blame that on the shots. After we went on vacation a few weeks ago and woke up multiple times each night I was DONE, so pretty much stopped nursing Will overnight cold turkey, which he tolerated just fine. Honestly, I miss it a tiny bit because he nurses so well overnight and never did any kind of dramatic waking up for long stretches nonsense. I still struggle with waking most mornings at the same time he used to, but as long as he's snoozing in his crib I'm not touching it.

With the extra sleep has come lots of extra daytime foods! Will currently eats three meals per day, some snacks, and nurses four times while he's awake. It's like feeding a teenage boy, I keep thinking SURELY this will be enough purees for four or so days, but he just.keeps.packing.it.in, which is fine because he's so little. Current favorites are all of the orange things - carrots, sweet potatoes, mango. He's also had some larger bites of soft foods like cooked carrots and canteloupe, to rave reviews although he refuses to pick up the food himself and instead opens his mouth and grunts until someone shovels something into it. 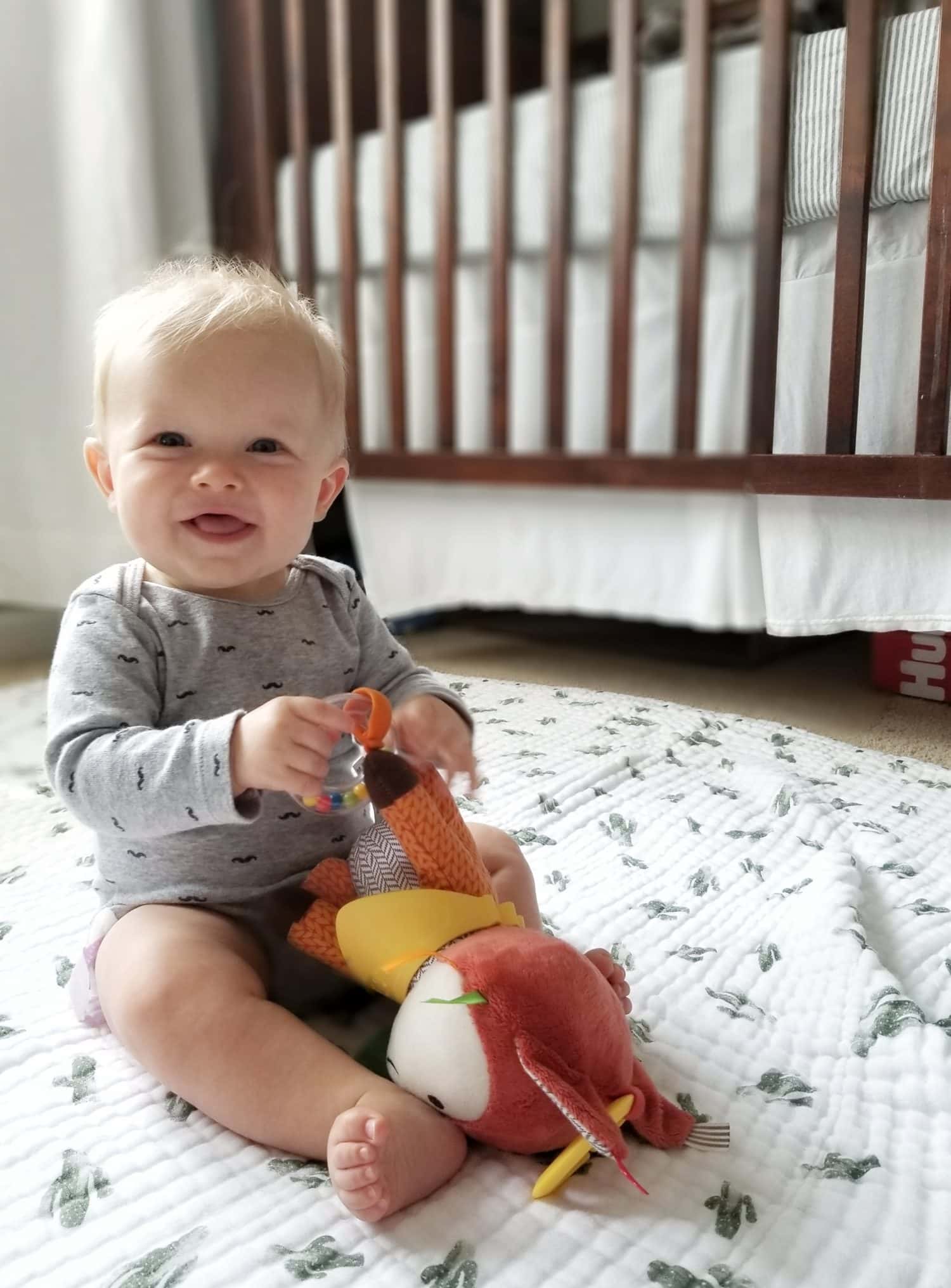 That sounds disgusting but actually is super cute.

With the extra sleep comes diaper that leak overnight. With the extra food comes grody massive poops that only happen once or twice per day. With the absence of breastmilk blowouts comes me forgetting extra diapers and changes of clothes because they aren't completely necessary all the time. I feel like I can't keep up with the changes even as I try to soak them all in and memorize him at every stage, while feeling so sad that sometimes I think I've forgotten Will from six months ago already. 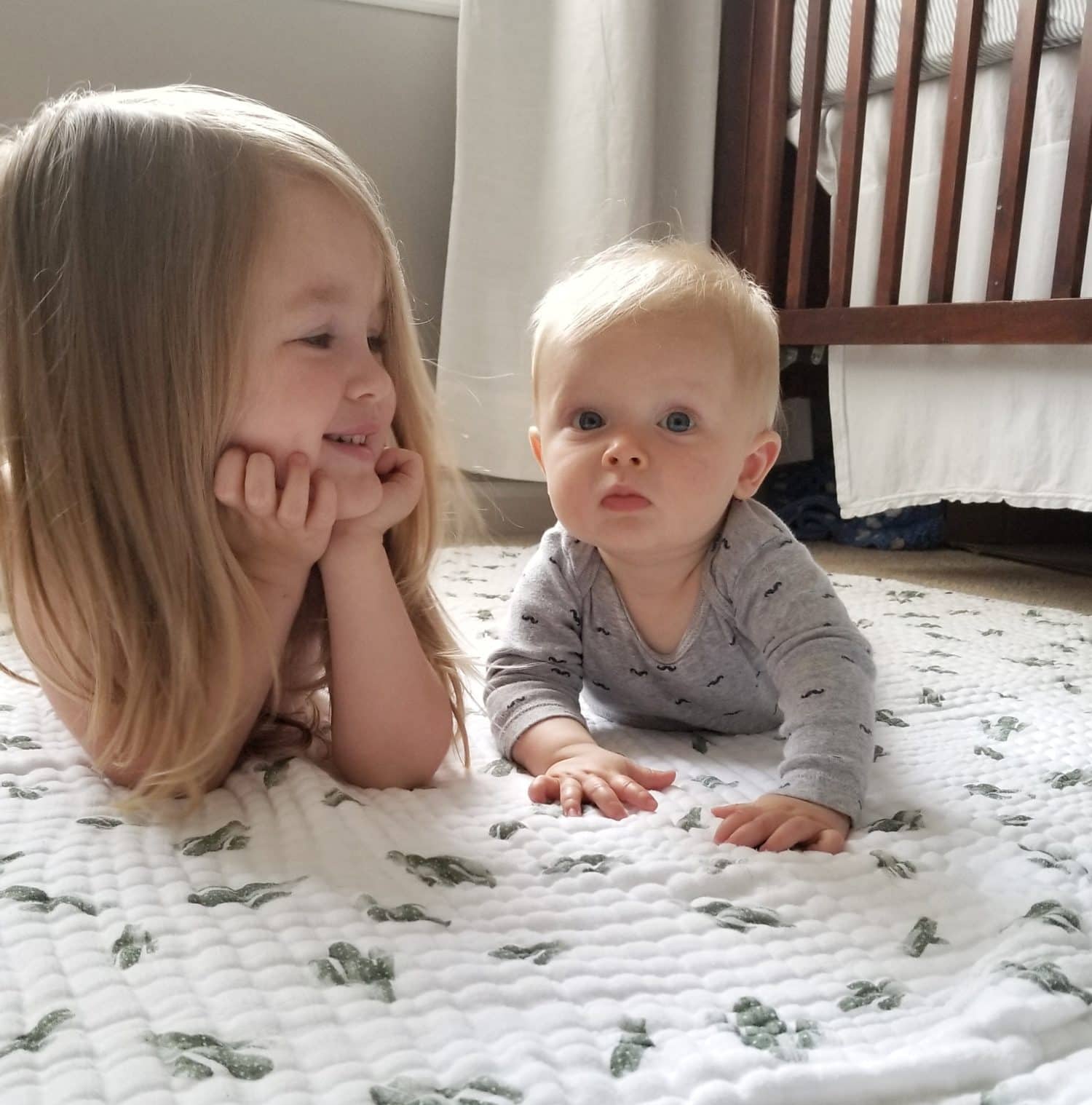 Physical milestones this month have been super duper fun. Will isn't crawling yet, but he's VERY scooty and role-y, often making it clear across a room by the time I fill up a water bottle or some other tiny task. He can sit really reliably, which is great because GUESS WHAT, he's had to practice that skill on some random bathroom floors. If anyone has a better idea for how I can physically help Beck go to the bathroom when I don't have his infant carrier I'm all ears, but the benefit of the sitting up is that he's not...lying down? and the benefit of the bathroom floors is...immunity? It's fine. We're all fine. 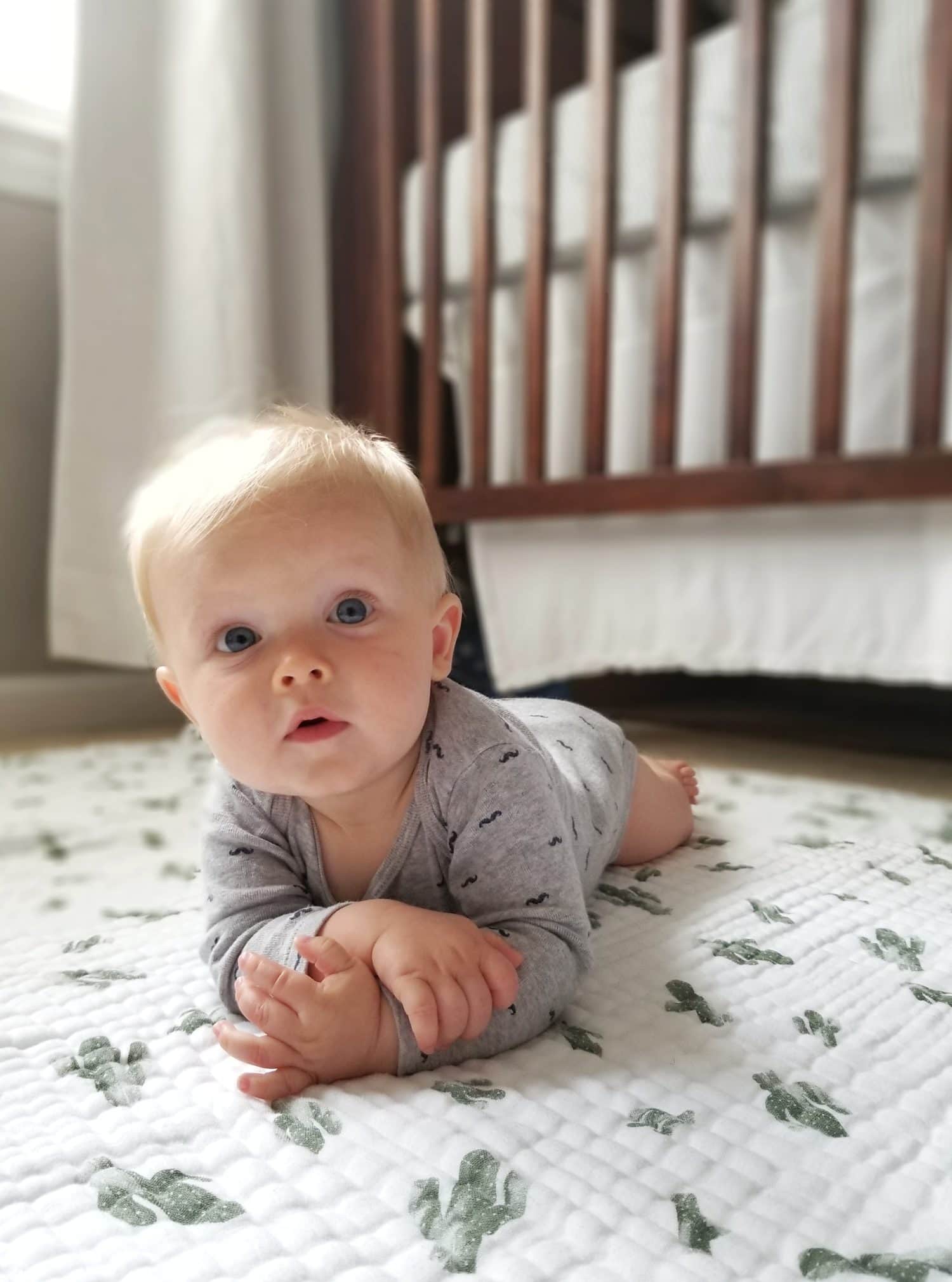 The sitting is particularly cute because Will can play with certain toys for a really long time; a fun milestone at this age. I love the focus he has examining rattles and anything that lights up or makes noise. He is particularly into music and gets really calm whenever music is playing, or dances excitedly if it's something upbeat that strikes his fancy. Beck enjoys music now that she's old enough to sing the words, but him starting this early is so much fun to watch. 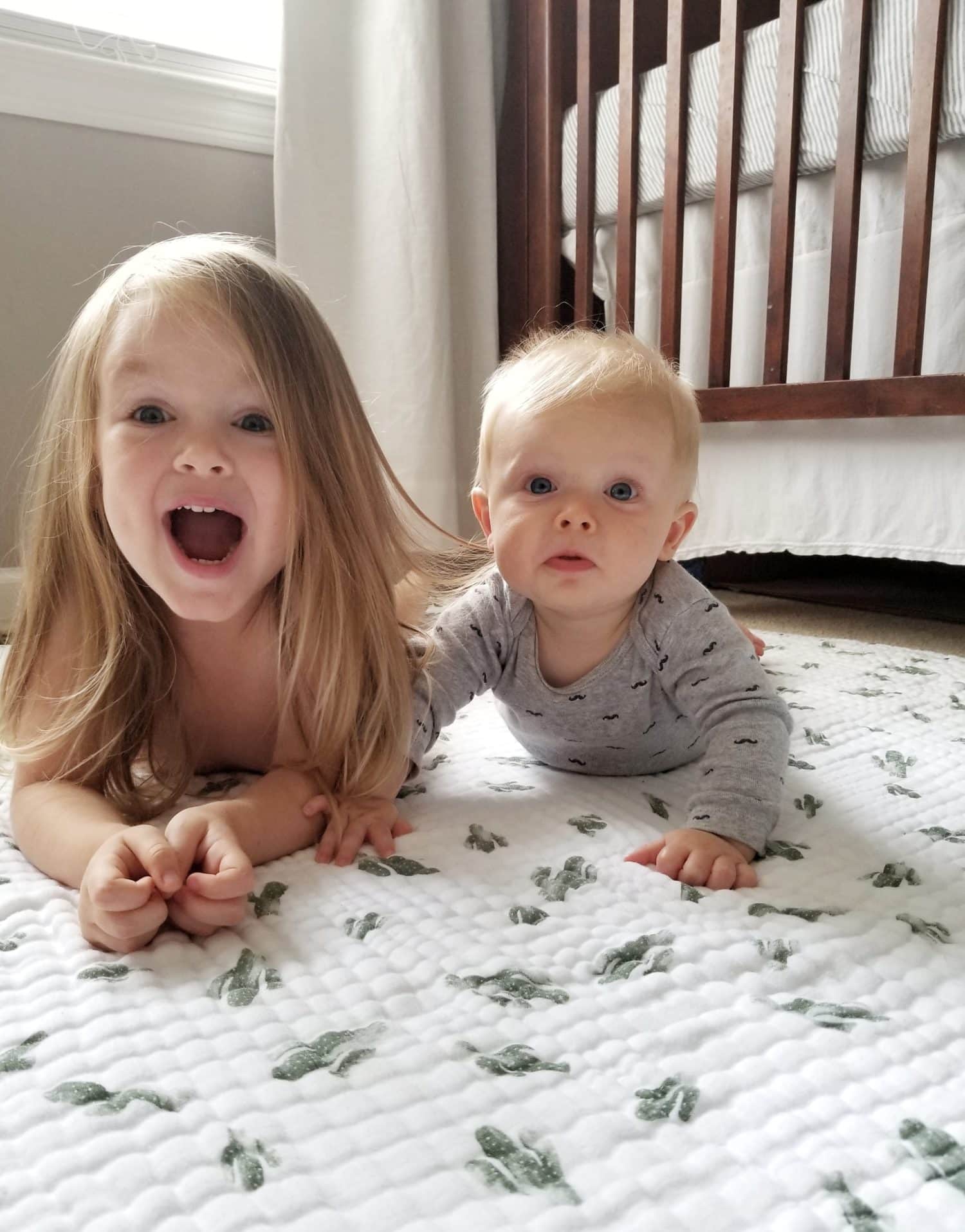 Beck is still Will's favorite person, tied I think with me and Jay. It's different, though, with the two of them. When he sees a parent he gets giddy and physically anxious like THEY MIGHT FEED ME, but with Beck it's slightly calmer, sometimes with a hint of annoyance but always a deep understanding, the kind of knowing that comes from being mainly equal to someone your entire life. Beck hasn't started professing her big-sisterhood on him just yet, so they're still just in this life together and it's my favorite thing to watch, knowing that it won't last forever. 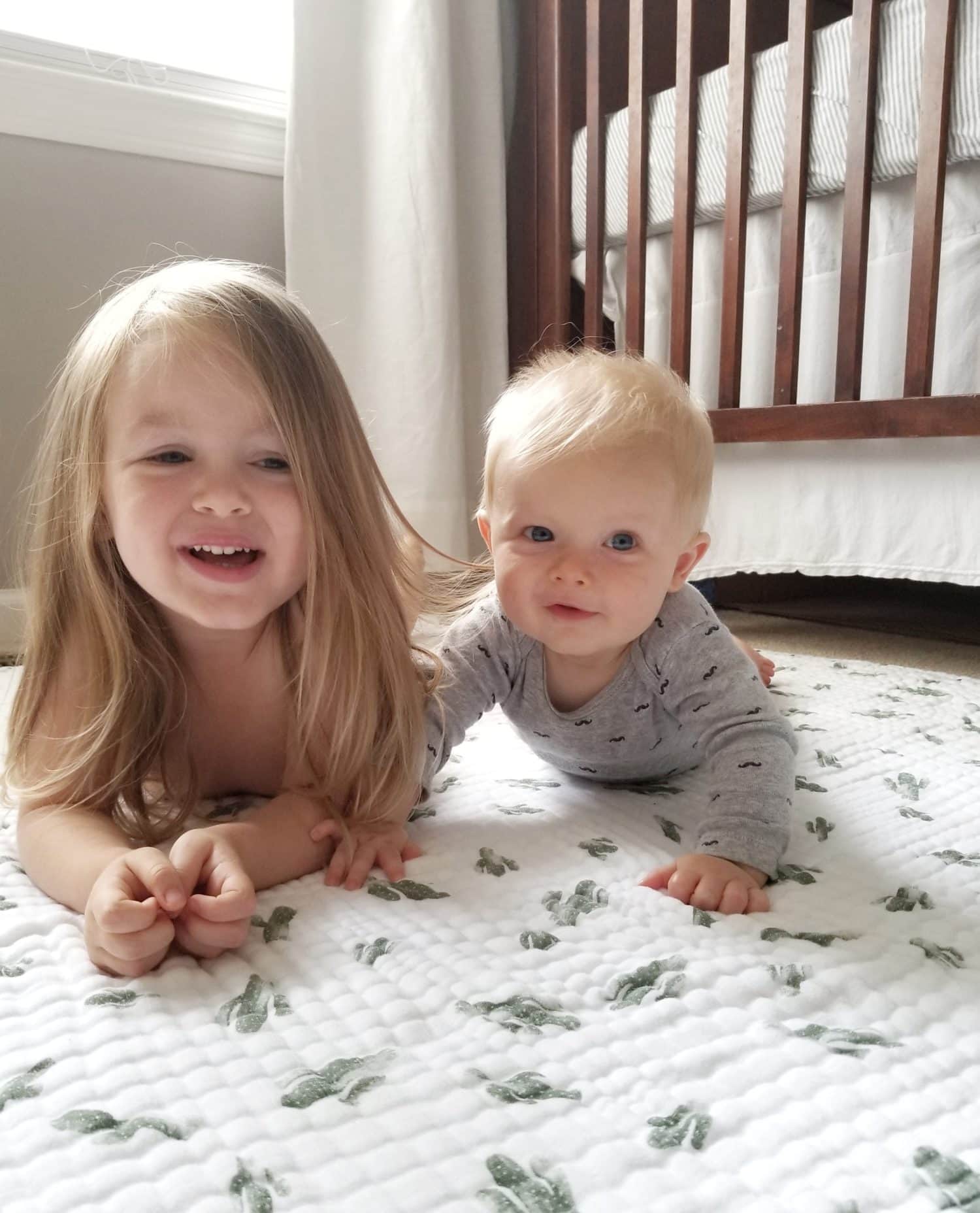 Personality-wise, I have a theory on why Will is so pleasant. Well, thing one is that we feed him all the time and have him on a great sleep schedule. But thing two! I think it's a second child thing. He has to stay in a very Middle Path state of pleasant so that if anyone looks his way and coos he's READY with his giggles and smiles. Otherwise, if someone looked at him and he was unpleasant, they might walk away! This is a LOT of theory for a small child to understand, obviously, but we're pretty sure he's a genius. Whatever the reason, though, Willy Bongo (this is a very important nickname and no I do not know how it started) is the most lovely little fellow and we are just so into him it hurts. 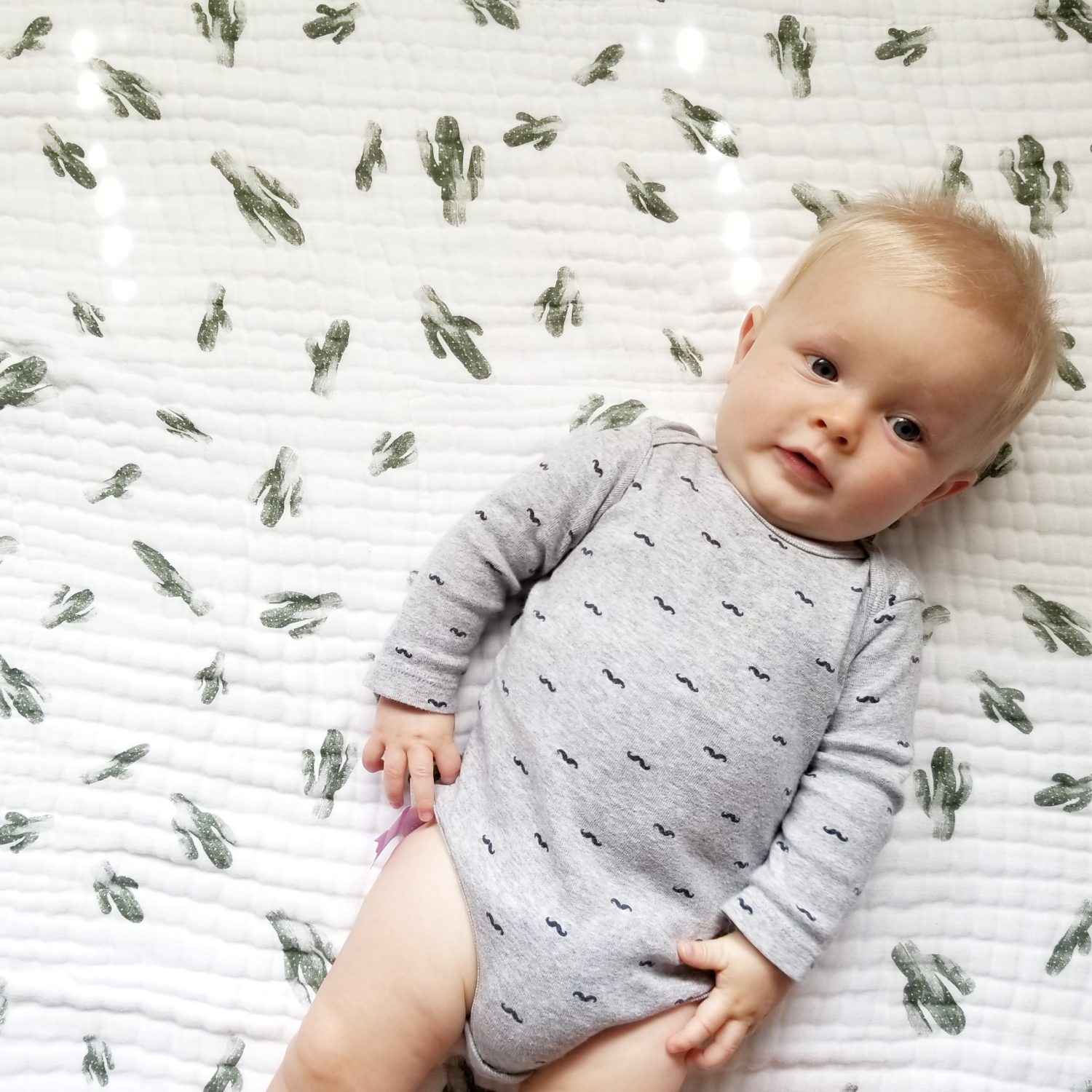 ^^taking off his own diaper while wearing a onesie, fun skill.

I love him. It's different than with Beck, and exactly the same, and absolutely double the love but half the attention, and I adore it all.