I threw my first baby shower last week!  For Scott and Belen!  And then we went on vacation and THEY HAD THEIR BABY IN THEIR HOUSE by accident which I will tell you about in more detail at a later time. 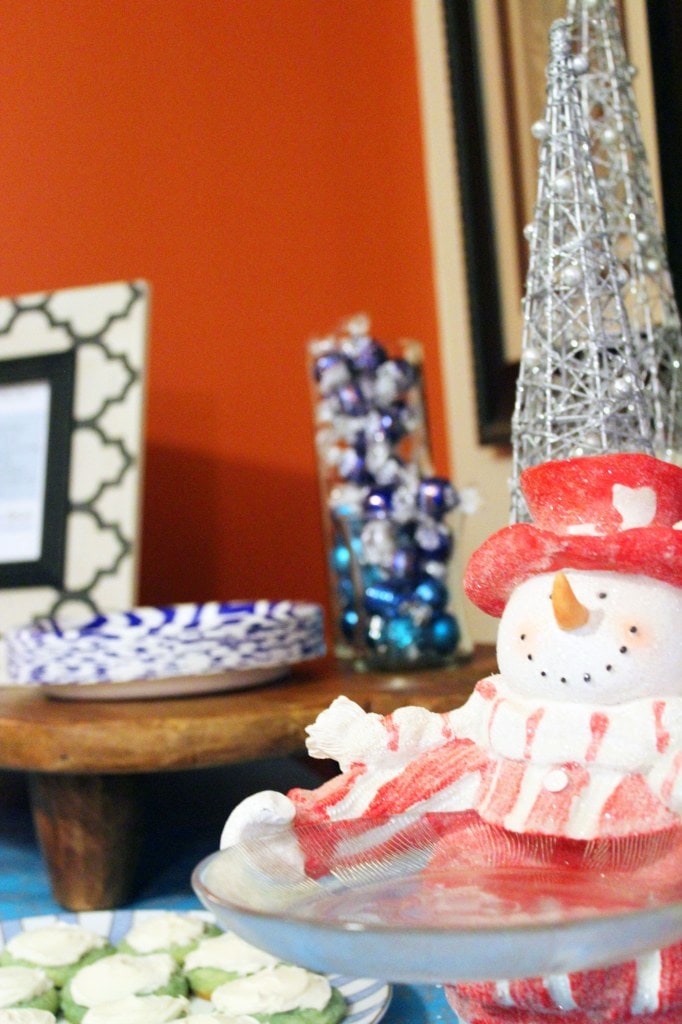 But first we need to talk about this shower.  I was a little nervous because it came on a really really busy week and Jay had been out of town and also Belen is always doing really cute things and my MO is kind of "give them booze and meatballs and maybe they'll like you?"  Not so much with the cuteness.

But then I Pinterested "winter baby shower" because I had it in my head that I wanted to do a winter/Christmas thing, and I saw a chalkboard that said Baby It's Cold Outside and I just kind of ran with that.  So!  Here is what the non-Pinteresty boozehound did.

Let's start outside.  I was stuck between seasons, and my pumpkins were uncarved and still healthy, so I made Jay spray paint them shiny blue.  We also put up our regular Christmas lights which just makes things feel special even if it's mid-November, doncha think?  Interestingly, at least one person didn't get the blue pumpkin thing.  One husband walked in and said "I really thought that you were just Carolina fans."  Hilarious. 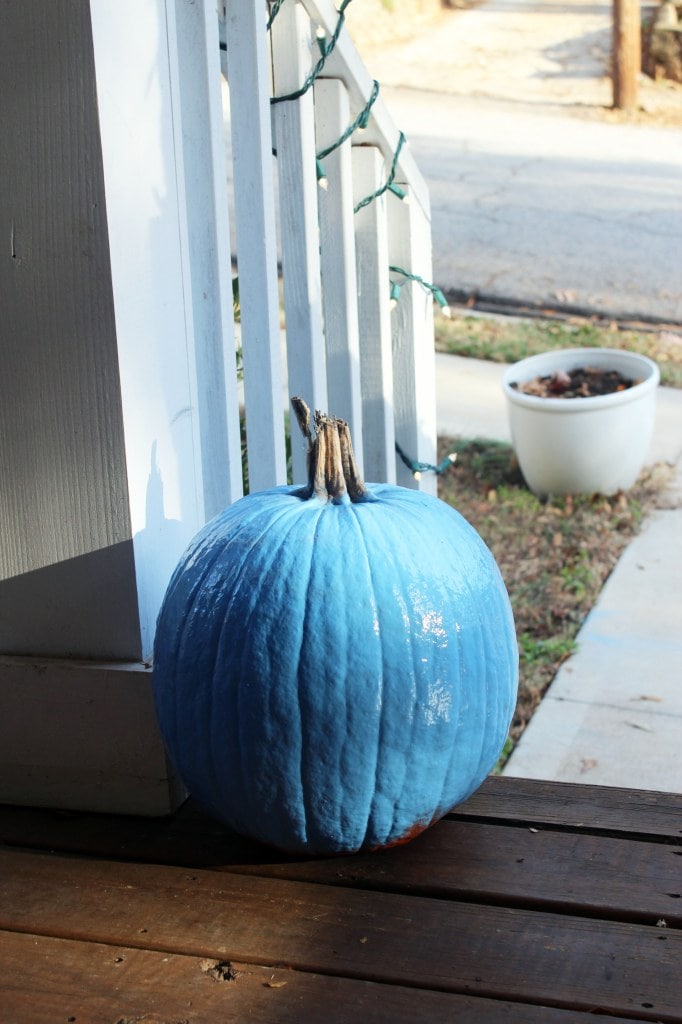 I got a really simple wreath from Trader Joe's and wrapped it with blue ribbon and stuck a beanie on it, which was probably my fav decoration.  The beanies were from Target and were part of a 4-pack, so I basically stuck them on anything I could manage all over the house.  Thematic, huh?  I know, I know. 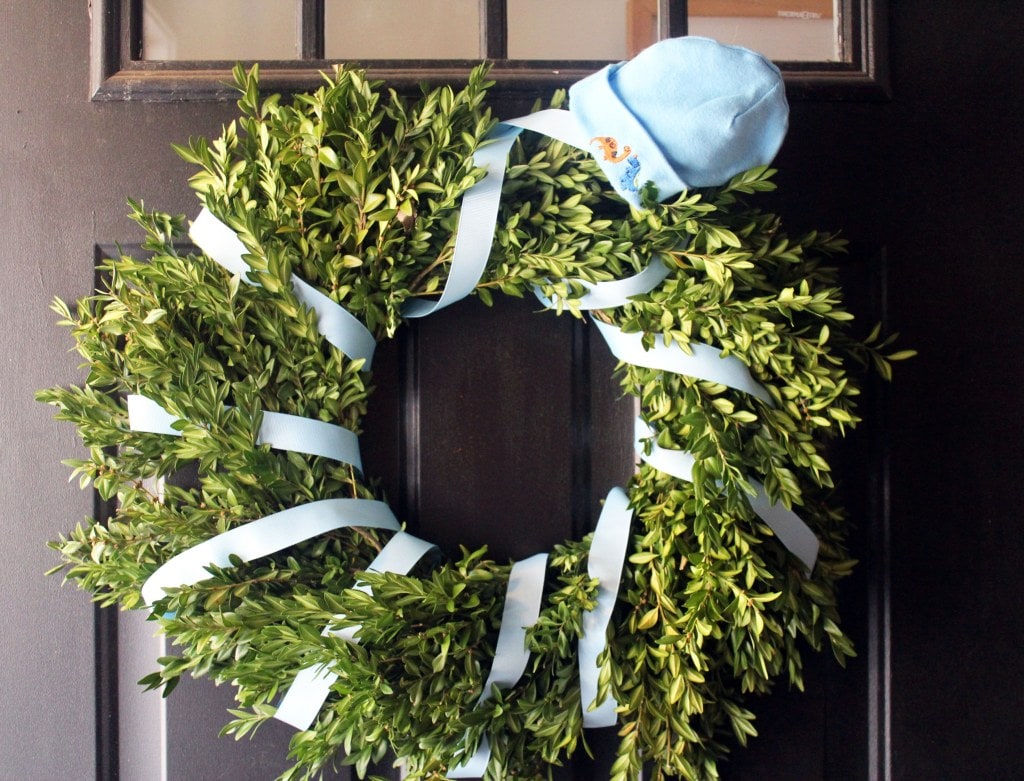 Inside, I had a sticky sign that I made my sister draw on - sticky chalkboard and chalk pens from Amazon for less than $20 so that everyone who was previously confused understood the theme.  I did beer and wine and champagne, and then Scott undermined me by bringing a bottle of nice whisky so that he could feel....fatherly?  It was kind of cute.   Men and their brown liquor.   I also ordered some prints of Instagram pics and whatnot that Scott and Belen had posted of Belly during Pregnancy, and stuck them to the front of an old window I have hanging on a wall with painter's tape.  It was super easy and of course I forgot to take a picture. 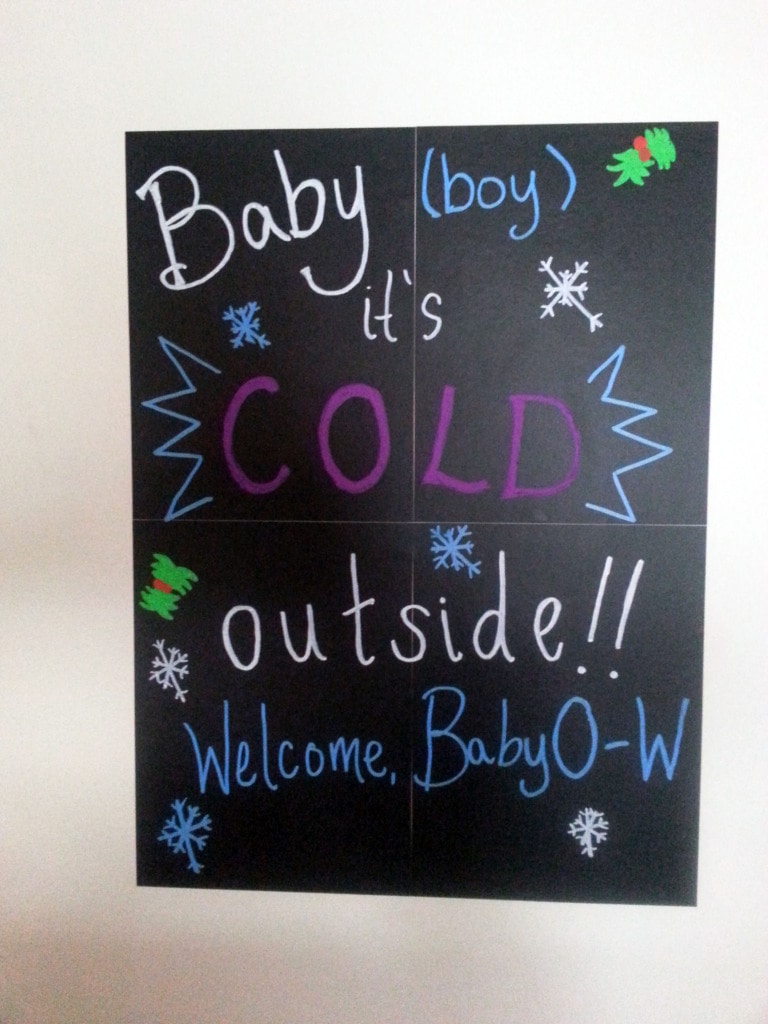 I couldn't find anyone to deliver a full-sized tree before Thanksgiving, so we just set up our little fake tree that we use every year.  I love it because I got it before I met Jay when I moved into that teensy apartment all on my own. 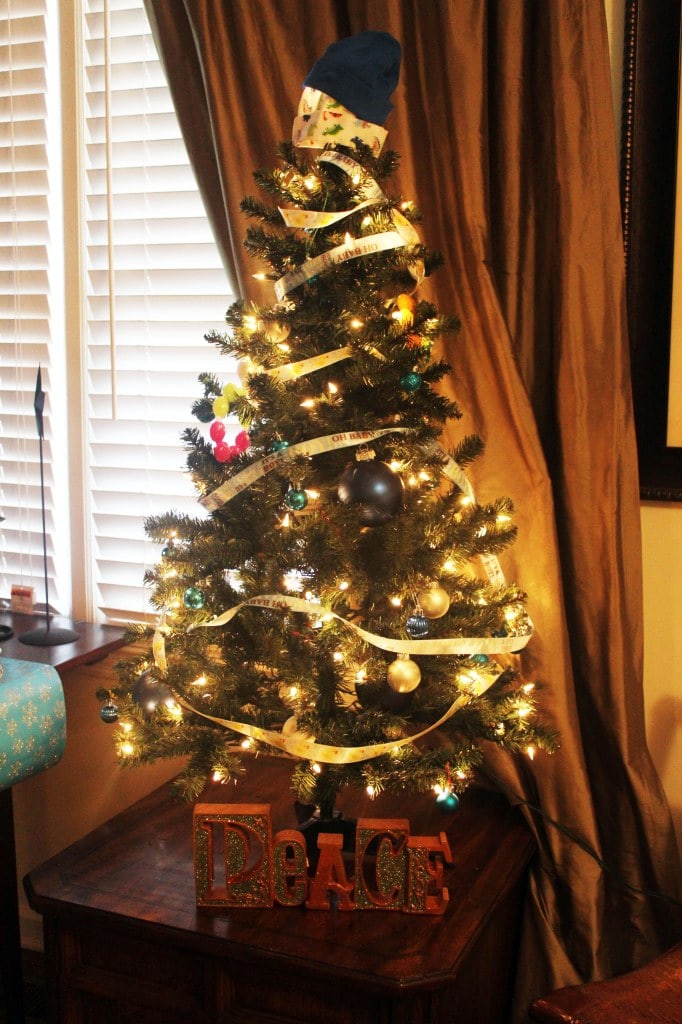 And look at the decorations!  Random blue baby ribbon that I had from another wrapping project, and more beanies on top. 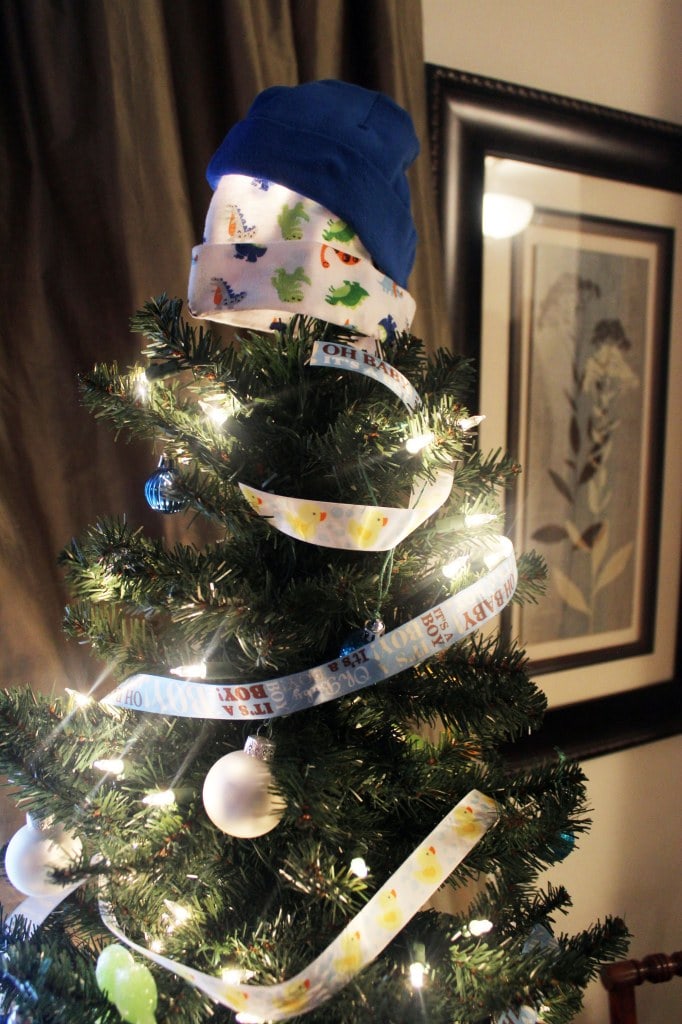 I also tossed on some teethers that I got as a gift, just for good measure.  Belen then stood me up by bringing HER OWN DAMN FAVORS (kidding, we had planned it in advance) in cute blue boxes that we arranged under the tree.  Presents! 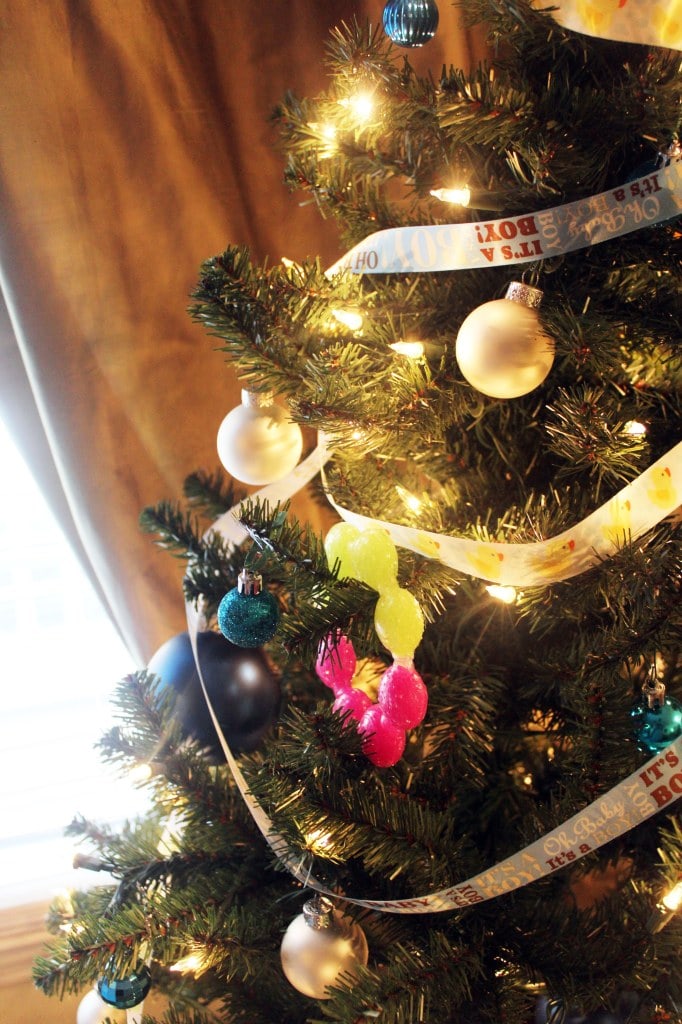 I had bought one of those large sets of teensy blue ornaments for the tree, and leftovers I stuck in vases with some blue truffles.  I used blue/white/wood dishes for the food, which was regular meatball sliders/spinach dip types of party food.  I didn't want to be silly and over the top with the blue stuff, but I did make sugar cookies and add some blue food coloring, which promptly turned the batter green because sugar cookies are kind of yellow?  Right.  Belen was all "those green cookies are delicious!  How did you make them?"  Apparently blue food is not my forte. 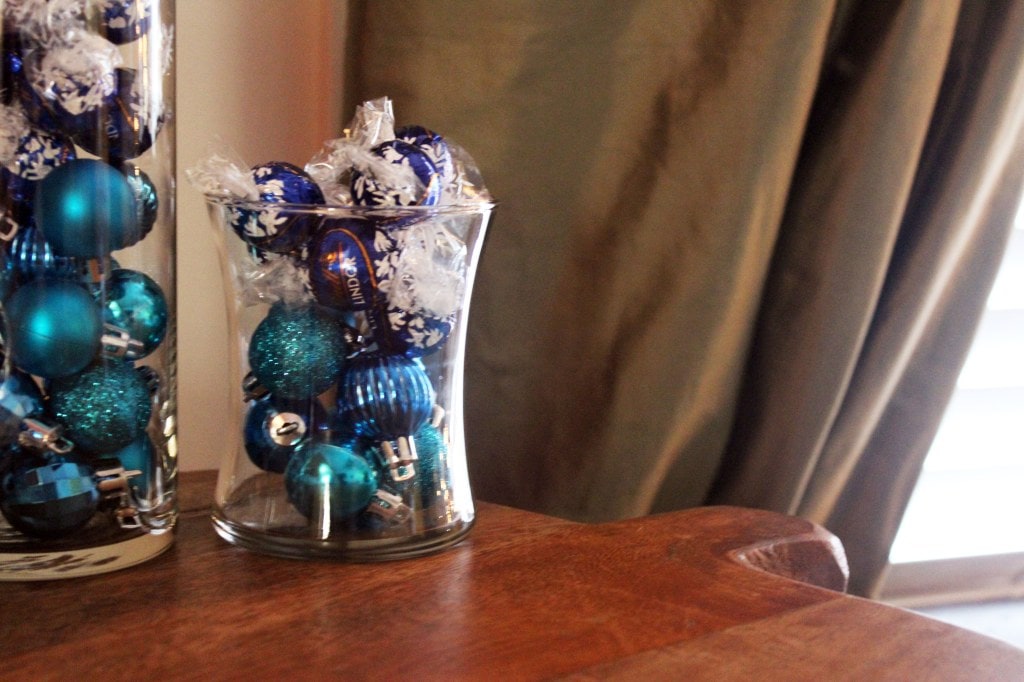 I did manage to add a blue table runner which, wait for it, IS WRAPPING PAPER.  Effing genius.  I lit all the candles that I never light because I hate dealing with drippy wax, didn't worry about messes, totally legit.  Using that trick all year round henceforth. 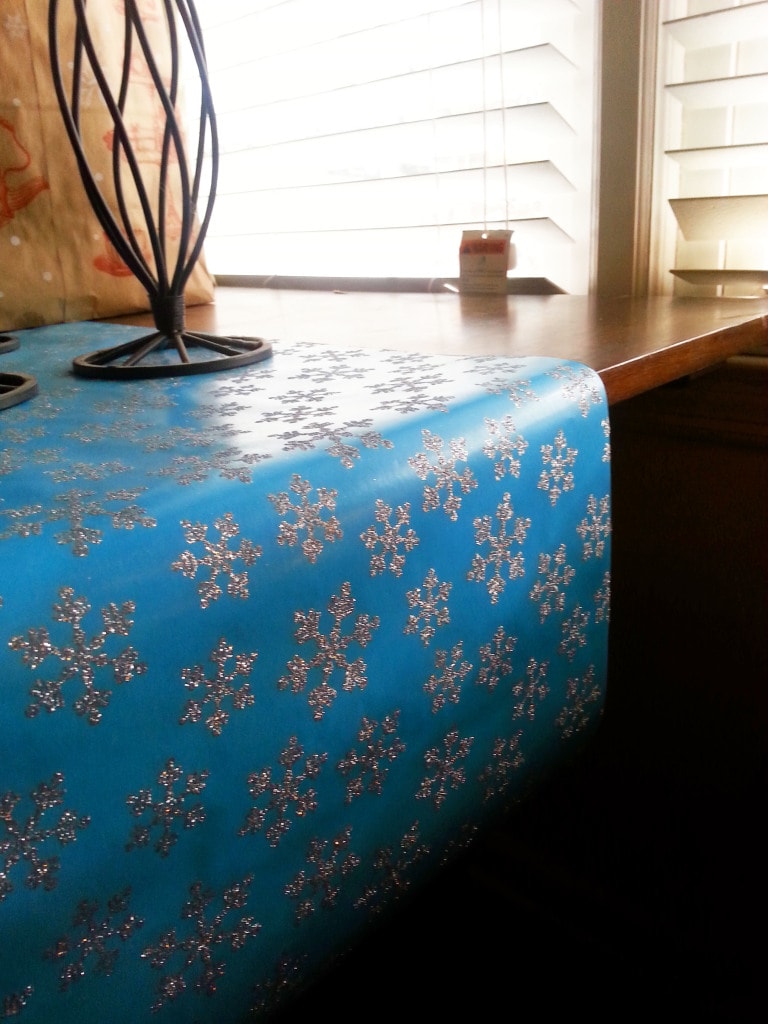 And that's it!  A few blue decorations, a few nice foods and drinks, and the anti-shower baby shower was complete.  We didn't play any games because I'm a scrooge, but we did open presents and oooh and ahhh and explain to the men what the heck everything was and why diaper genies are really important in this world.

Now, if someone could please gestate a girl that would be great.  I've got some pink ideas. 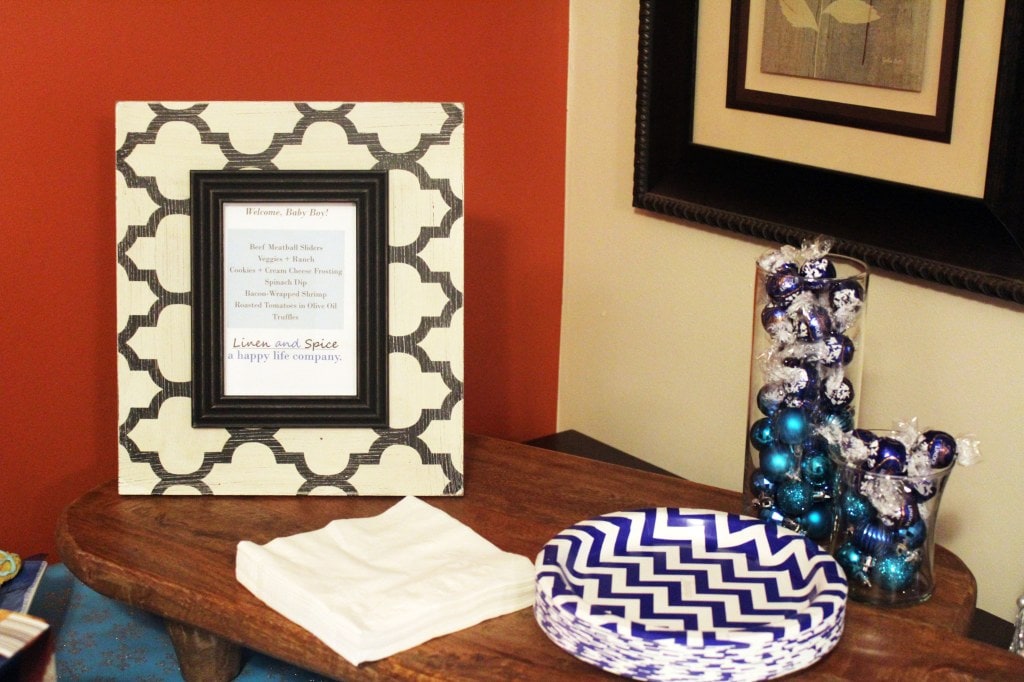