I've been waiting, like, forever to tell you about these. 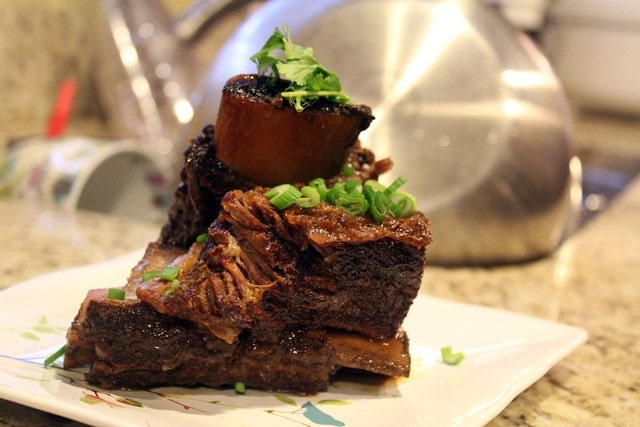 Ok so two weeks, but whatever.

I'm pretty sure I told you a few weeks ago that my friend over at Struggling Home Brewer was gifted some incredibly high quality short ribs.  He asked me to cook them, so I did.

Interestingly, said short ribs were gifted in their original form.

Not short.  Connected, as they would be on a cow.  I didn't know this when I went to pick them up, and finding a butcher that would hack into something who's origin they knew nothing about was somewhat of a challenge.

Imagine that conversation, please?  It was ridiculous.

The effort, though, was well worth it.  These things were GOOD.  Super buttery, simple to make, and the sauce was REALLY delicious.  There are a few ingredients in it, but REALLY, for the sauce, if you use soy sauce, hoisin, ginger, garlic, beer, and sriracha you'd be just fine.  The other ingredients add a nice punch, but you could simplify the sauce quite a bit. 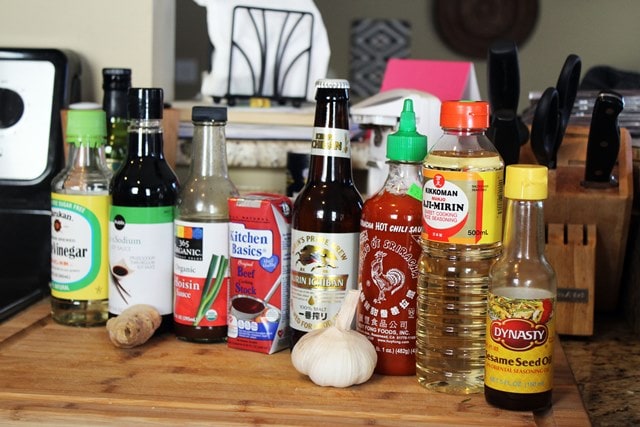 To make these, I braised them the day BEFORE I wanted to eat them.  Then, by chilling in the fridge over night, the fat rises to the top of the pot and solidifies, which makes it so much easier to remove.  These have a lot of fat, so it's worth the extra day if you have it! 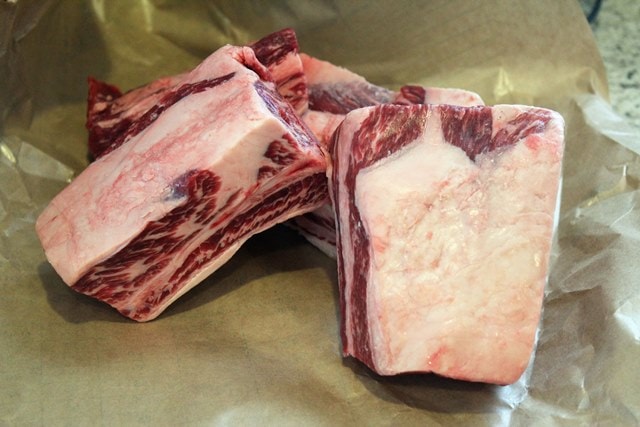 The process will be this:  Sear meat, make sauce, deglaze pan, return meat to pan, braise for hours, refrigerate, skim fat, reheat sauce, add slurry to thicken, eat.  The steps are all super simple, and you can CLEARLY do other things while the meat cooks super slowly in the braising liquids.  Trust me.  These are worth it. 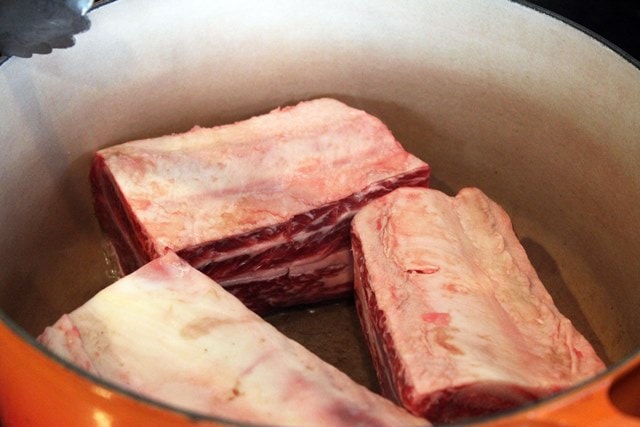 First, preheat the oven to 300F.  Preheat a large pot to medium-high heat with a drizzle of olive oil. Lightly sprinkle the short ribs with salt.  When the pan is super hot, sear the ribs on the 3 meat sides until super dark and crunchy - in a good way.  This will take some time, maybe 4 minutes per side.  Don't rush it!  The meat will stick to the pot at first, and release on it's own when they are totally seared. Trust me. Do this in batches so you don't crowd the pan. 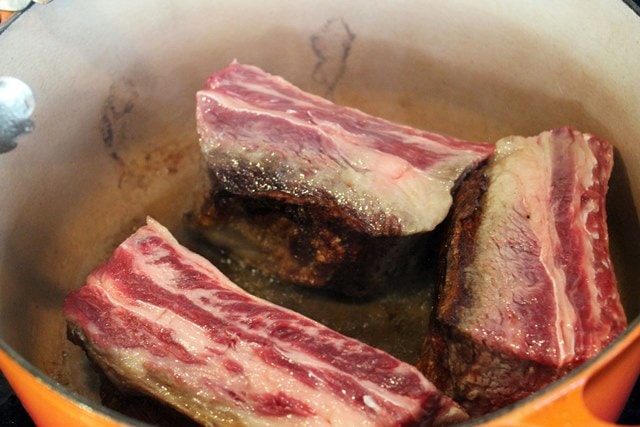 While the ribs are searing, make the sauce. Whisk together the vinegar, soy sauce, hoisin, beef stock, sriracha, mirin, and sesame oil. 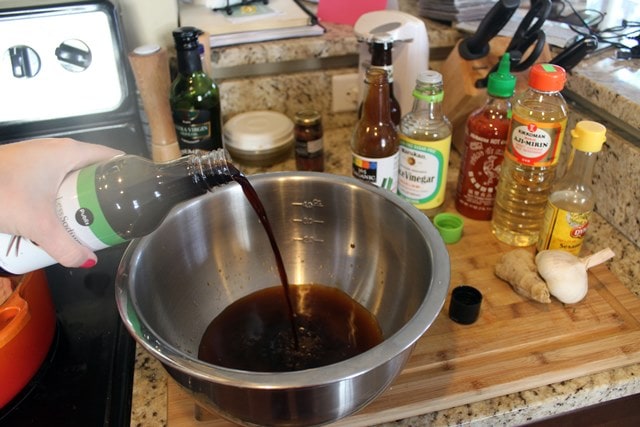 Grate in the ginger. 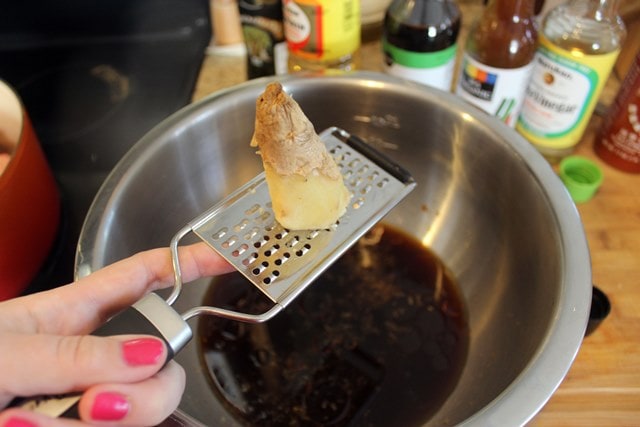 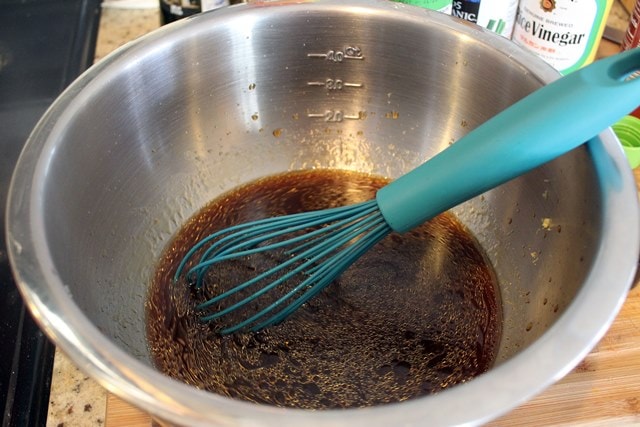 Peel the garlic, too!  Smash it with the side of your knife... 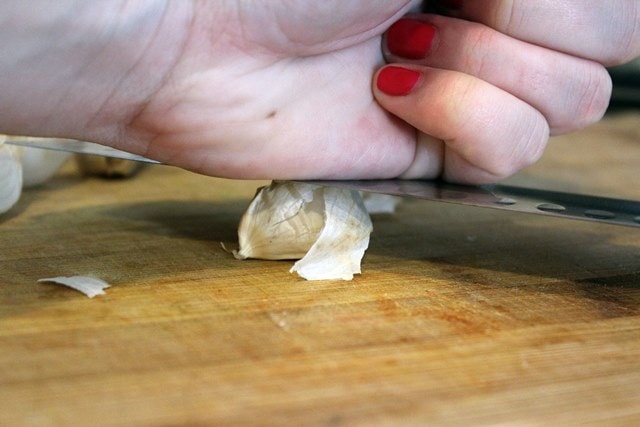 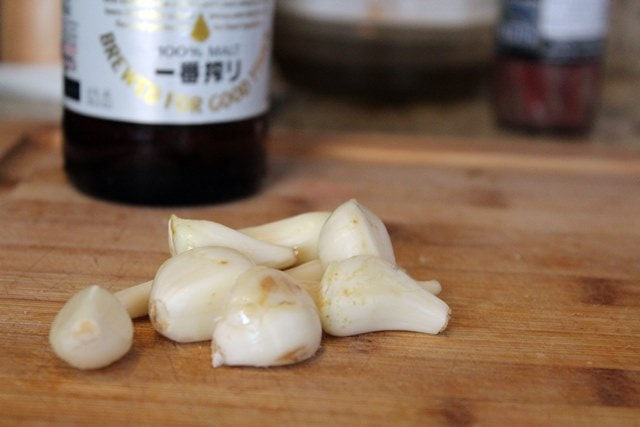 When the ribs are totally seared, remove them to a plate while you deglaze the pan.  My pot had about ½ inch of fat in it, so I dumped it out in the yard for the dogs to find a day or so later.  They were appreciative of that. 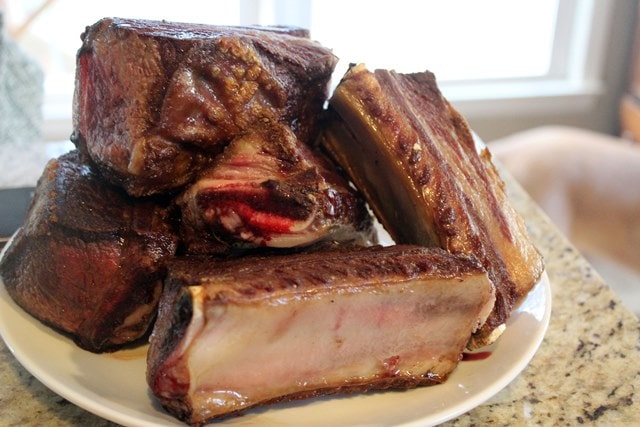 Dump a beer into the pan and reduce the heat to medium-low.  Stir the beer gently to remove all the yummy bits from the bottom of the pot.

Add the sauce to the beer and pan drippings, too! 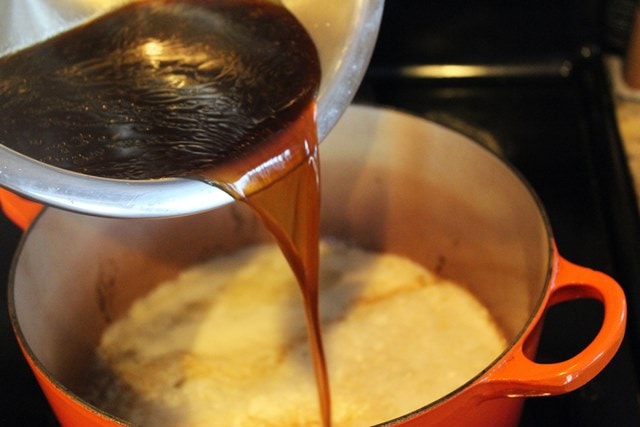 Then, return the short ribs to the pot with the beer, and toss the garlic cloves right on top of everything!  YUM. 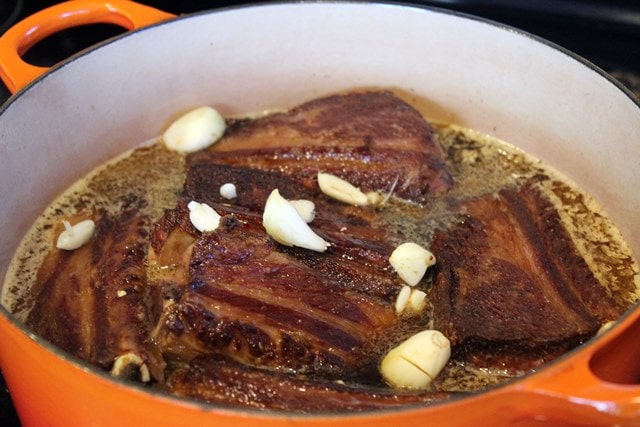 Cover the pot and place the ribs in the oven for 90 minutes to 2.5 hours until the ribs are very tender and the meat is falling off the bone. Check them every 45 minutes or so with a fork to test doneness! When the ribs are fully cooked, remove the pot from the oven to cool.  How long the ribs take to cook will depend on your oven, how large your ribs are, and blah blah blah.  Just check them every once in awhile - you'll know when they're done!

When the ribs are cooked, put the whole pot in the fridge overnight, or for at least a few hours.  The fat will rise to the top and look all grody, like this:

Mine had over an inch of fat, so it was a GOOD thing that I did the make-a-day-in-advance maneuver.  Scoop out as much of the fat as you can. 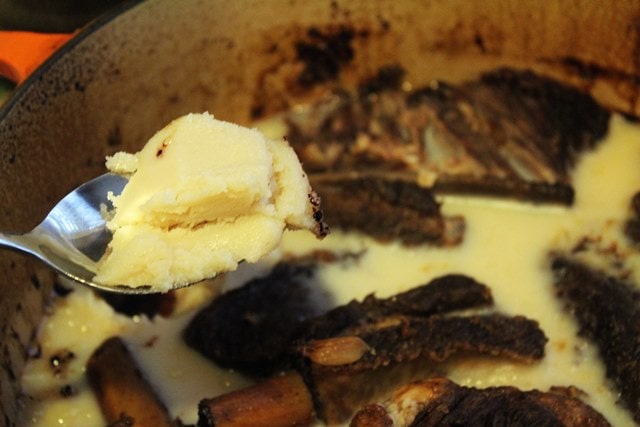 Then, return the ribs to the stove top over medium-high heat to let them warm gently through, and grab your slurry ingredients. 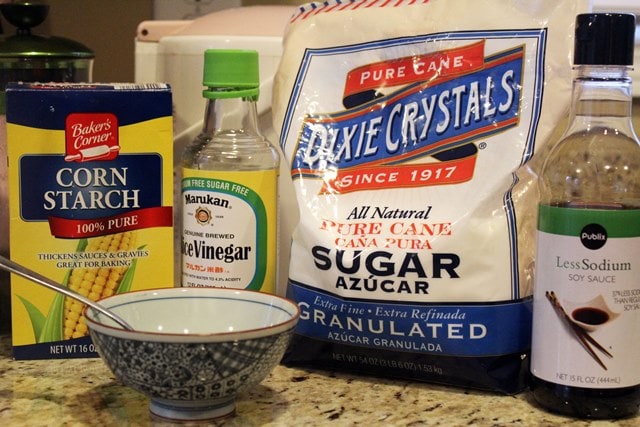 Make the slurry. Combine the rice vinegar, soy sauce, corn starch, and sugar in a small bowl. Stir it really well so the sugar and corn starch dissolve in to the mixture. 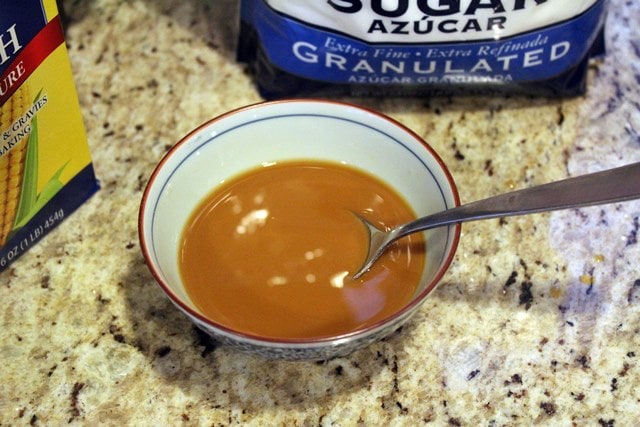 When the sauce is hot and bubbling, add in the slurry.  Stir it into the ribs to let the sauce thicken just slightly.  Then, taste the sauce!  Add more salt or sriracha if you think it needs it. 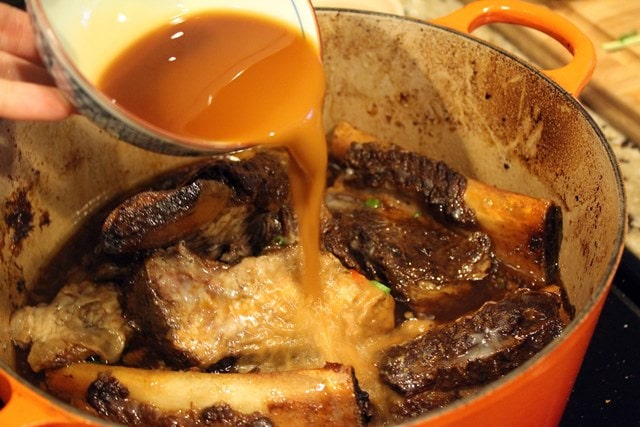 To serve, I grabbed some scallion and cilantro - the bright freshness does a great job of cutting through the richness of the ribs! 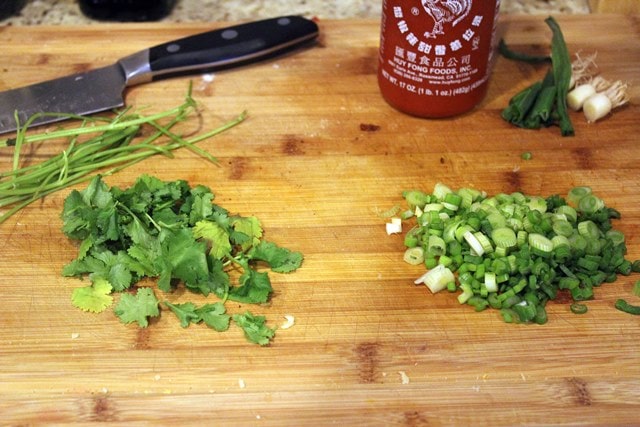 That's it, kids.  These are SO good.  They were delicious alone... 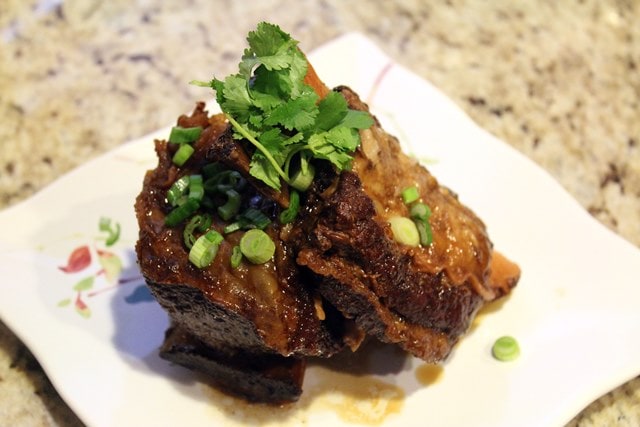 ...and served over rice with some extra sauce on top they were AMAZING. 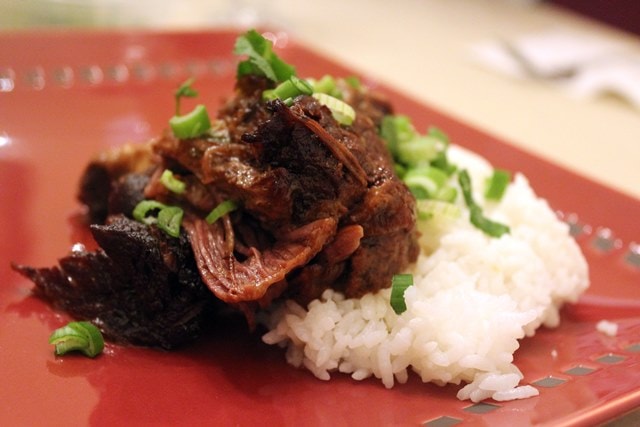 Trust me. Just go for it.

These seemed perfect for this week’s Weekend Potluck.  It’s this cute thing where blogs from EVERYWHERE can submit recipes to share with others – it’s so fun to check out new things!