Home » parenting » About a Beck! Two and a Half.

Two and a half plus a month because time is escaping me, so rounding the bases toward three faster than I'd like to admit. Also messing with my mind, Beck will be a big sister at her next birthday in five seconds. 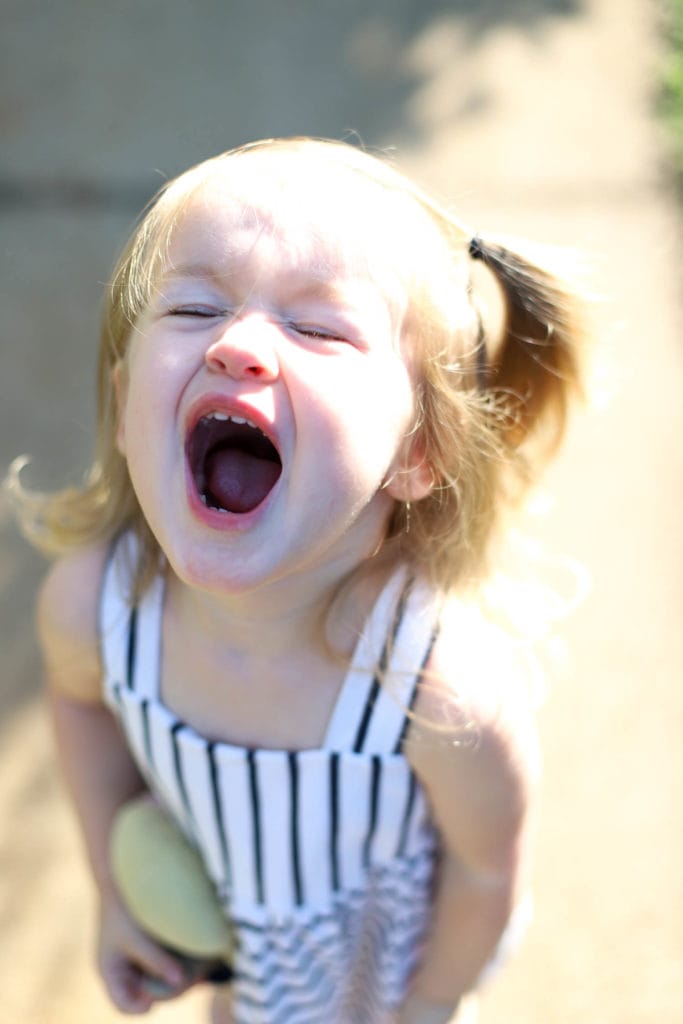 So this child. Spunky doesn't begin to describe it. Figuring Out Humans is Beck's current largest project, and it is hilarious and heart-warming and terrifying all at once to watch. We are seeing the beginnings of a LOT of defiance that will sometimes last all day for no reason, and of course worsens when she goes to bed late or otherwise has her beauty sleep and/or schedule disrupted. 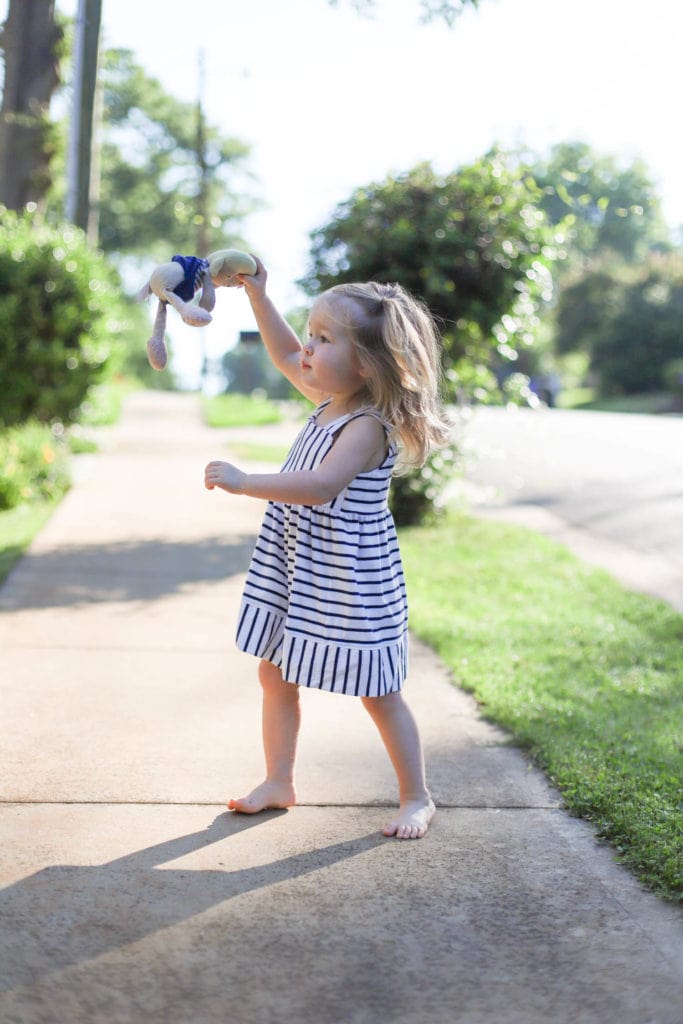 We think that Beck is starting to grasp the concept of a new baby, thanks in part to two other friends who are pregnant and due before me. We're all big-bellied and talking about babies all the time, so I have hopes that seeing her friends with baby siblings will be a good prep for us. Beck doesn't have a ton of thoughts on the baby, but she does refer to him as "Baby Brother Tina" because she watches a lot of Bob's Burgers, which we find hilarious and people who are really fixated on gender norms find legitimately disturbing. To that we say: she's a child, reprimanding her for naming a fetus is a little heavy-handed and adds shame to my lovely daughter where it doesn't need to be. All exaggeration aside, we've had a few overly-strong reactions to Beck's naming of the child that honestly are just tiresome given what is a very cute and funny thing.

Besides the gender-bending name, Beck has conceded that she will share ONE paci with the new baby, and is mostly curious about what sorts of things he'll be into when he arrives. "Will he want to share my chicken with me? Will he like chocolate too?" I haven't done any prepping with her for breastfeeding other than "babies drink milk," so I'm sure that will have some fun revelations when she figures out how babies eat. There's also some curiosity about Baby now, mainly if I wash him too when I take a shower and if he also has to nap when she does. Yes to both, obviously. 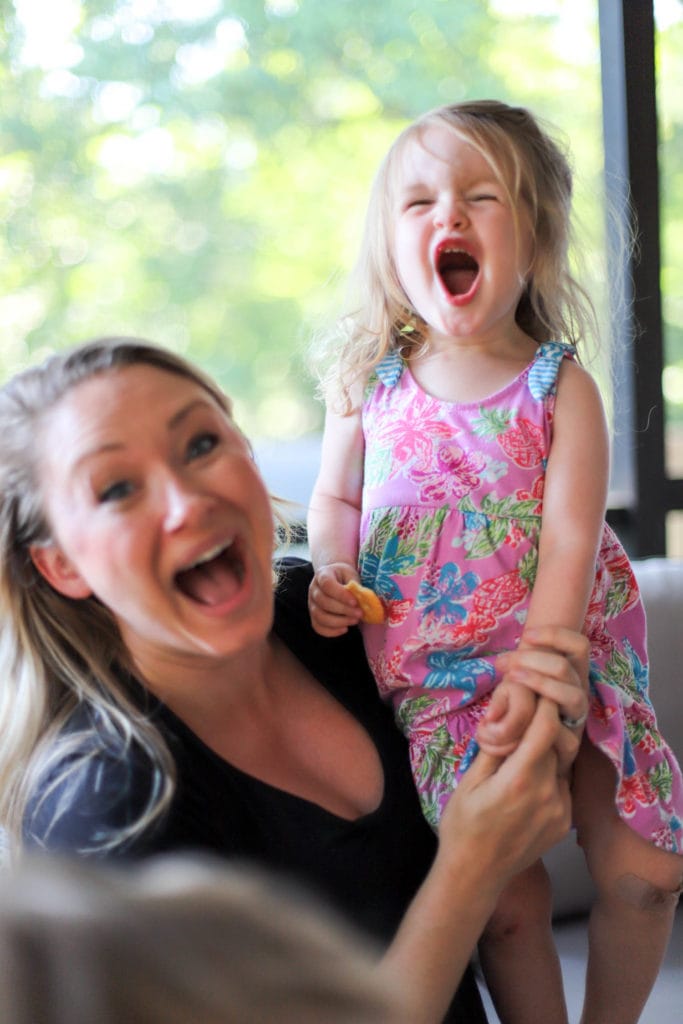 We're moving Beck into her new room next week (heyyy Prime Day cheap kids furniture), and I think she's starting to get excited about that although I'm terrified to have her not contained while she sleeps. She can allllmost manage the doorknob in her new room but I'm hoping a bed rail will discourage her from getting out of bed too often. I know this is a thing in the world that most people live through, but I have these thoughts of her casually venturing into the street at 3am just because she can, even though she's not nearly that brave during the day. How do more children not do this? 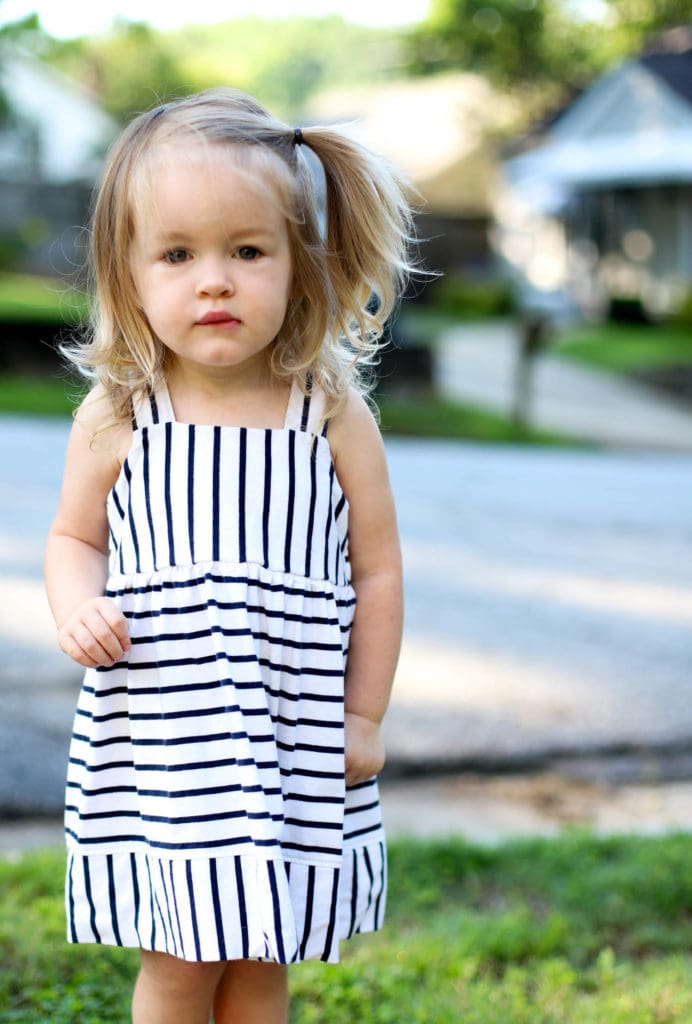 Beck has started imitating some kind of a sympathetic voice where she makes her voice high and slow and asks if things are wrong, "does Daddy's poor leg hurt a little bit?" all fake-concerned and no doubt imitating one of us. She also has a loooong memory of things happening to her that are less than thrilling, such as having blood drawn over a month ago at the doctor's office. Out of absolutely nowhere she'll pipe up with "when the doctor pwicked my finger I did not like that at all," holding up the aforementioned finger as if it still had a trace of the blood draw. She is starting to understand cause/effect of physical choices, and this morning informed me that "If I stand on the couch and fall off I might hit my head and get blood everywhere and I would cry SO much." True kid, true. So don't do that. Unlike other children, Beck hates Bandaids so getting her to use them on skinned knees (nearly a constant) is a struggle and I all but have to trick her into putting them on so she doesn't bleed all over the place. 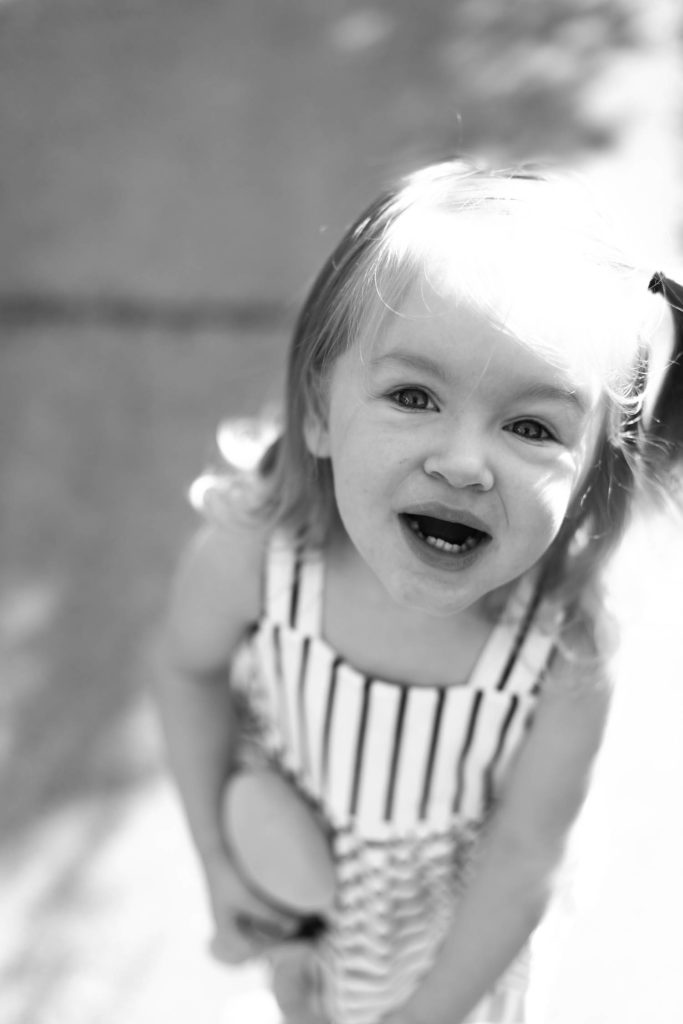 She still speaks beautifully and in complete sentences, and we relish every little-kid error because they're just so cute. She asked me over and over again the other day for a "prinsapee" pillow and I was like....???... until I figured out she wanted to play with my pregnancy pillow, super hard word alert. She also loves peanut bubber on her apples and if anyone ever corrects her on that one I'll stop talking to you. She knows the entire alphabet (only capital letters), can count fairly reliably to twenty, and can spell her name and MAMA, because I'm the one that teaches her things so it seemed like a natural second word to be able to spell. 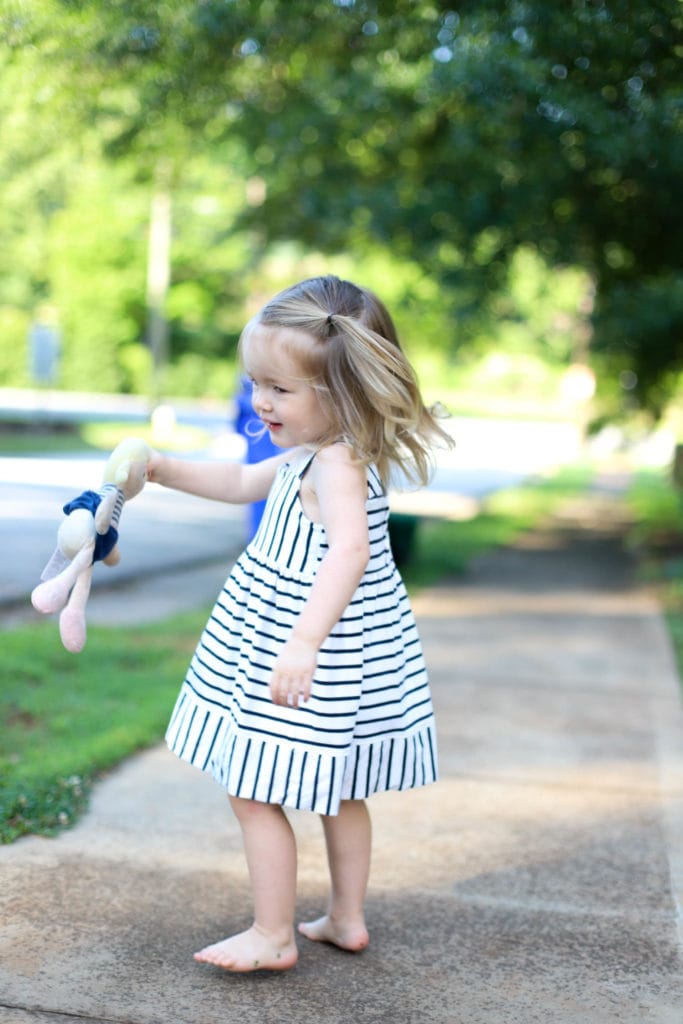 Playtime has gotten super duper fun recently, "heading out to work" being the current favorite game. This game involves Beck gathering a few things together and "going to see a client or two," yelling "goodbye family!" then wiggling a doorknob and running back to us yelling "I'm home, I missed you while I was gone!" There is practically zero involvement on my part, and we love watching her imitate things she sees us do day after day even though she has no clue what is happening. Her play kitchen is by far her favorite toy, and a favorite of almost every kid that comes to hang out here. Beck also can be pretty easily talked into other games like "laundry," which is useful for, you know, getting anything done ever. 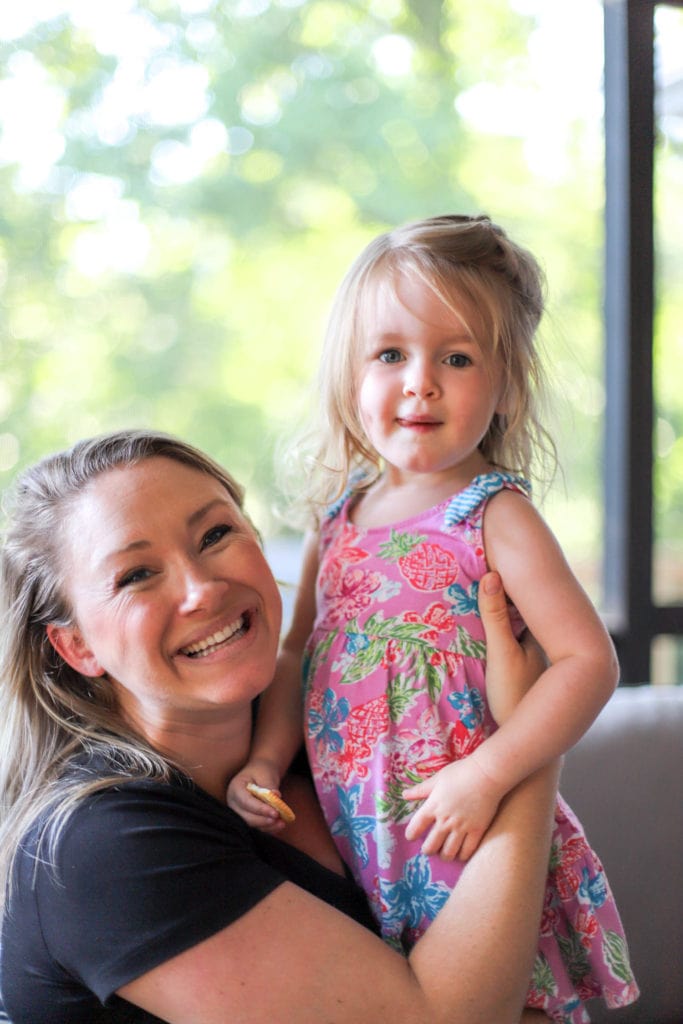 Adult emotions has been another hilarious imitation game lately, "I missed you SO MUCH when you were at work, Mama!!" comes out of her mouth almost every day whether I've been gone for an hour or an entire day. It breaks my heart but I also know that she spends approximately zero time actually missing me when I'm gone, so it's more cute than anything. She does have a little bit of a struggle getting used to us as parents when we come home from longer trips, or if one of us has two or three long work days in a row. She alternates between being super shitty to us and being overly clingy with us, which we understand and try to skirt by with bribes of snacks and screen times. I'm cool with it. 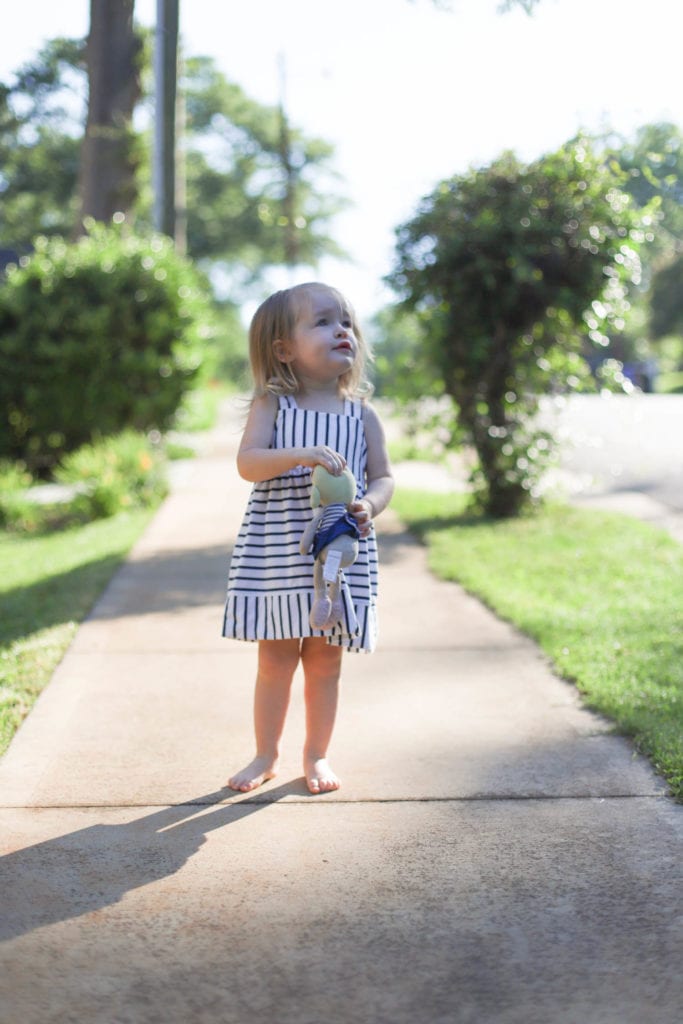 As for us as parents, it's the same song and dance that everyone sings. I adore her so much, she's the sweetest and best ever, and also some days I might actually murder her. I'd blame it on pregnancy hormones, but I think it's also pretty normal for a human to not like another human when told "no" over and over again, when hit, when generally abused with very little payoff. I'm OK at being patient until I'm not, that sort of thing. I think the easiest things to be disappointed in are the ones that Beck has no clue about - I got out of my way to do special things for her and then she behaves suuuuuper badly. She has no clue generally that any of the things were special, that I didn't do x/y/z to do something more desirable with her, of course not. So it's not her fault, and I know that, but I still have to remind myself of that over and over again on days when it feels like she's totally against me. I know it's not true, but it's hard to not take personally. The sweetness and snuggles more than make up for it, and she's still highly prone to hold her arms out and say "I want to be held," which I try to never ever say no to unless I'm covered in raw chicken juice or similarly unable to participate, it all is going so quick and I know she won't need me to hold her forever. 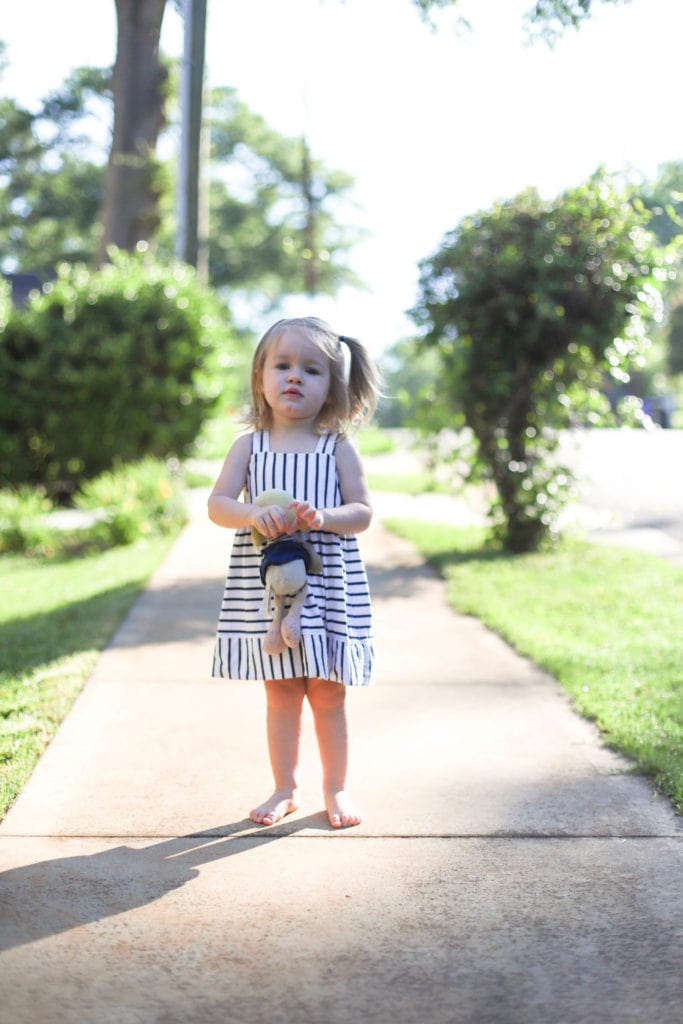 Up next is school in just 6 weeks, which she is going to flip out over and I'm so excited for. I also don't think she has a school supply list yet which is a great thing, I'll enjoy that as long as it lasts.