A big girl!  I think I've said that every month since Beck was 4 months, and when she's 11 and I'm looking back on these posts on...like...microfiche or something I'll cackle at myself that 9 months feels big.  But it does!  Because it's the biggest she's ever been. 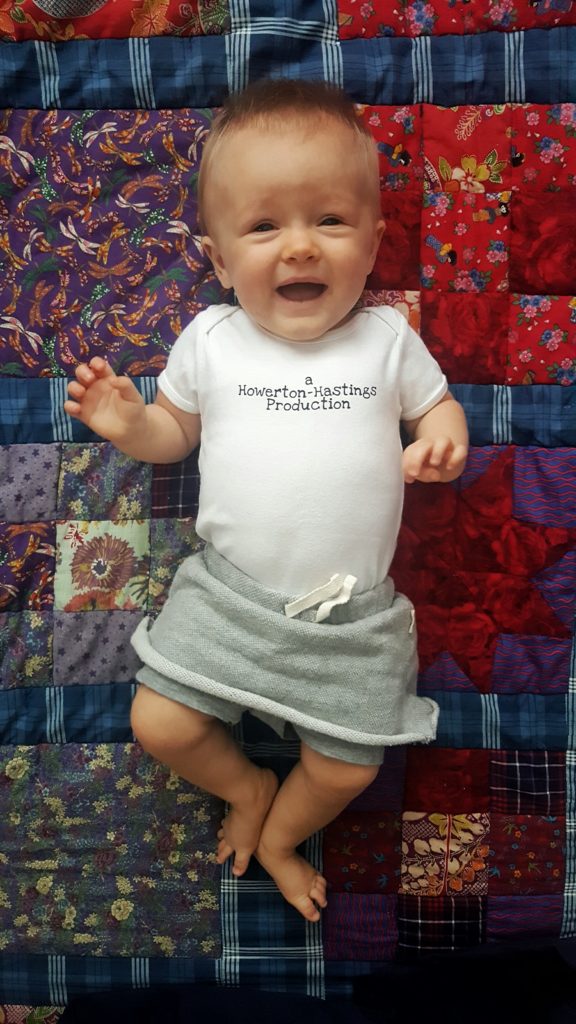 This child is still not crawling.  My friend Amanda says that her first child, also a girl, was "a princess and wouldn't do anything because I'd do it for her," and I'm definitely getting that vibe from Beck.  She rolls to her destination, over and over like you used to do down hills as a kid, and can finally sit up with all the power in the world, which is adorable.  Why are sitting babies so cute?  She can also reach reeeeeally far for stuff, but then gets scared that she'll fall over and back that ish up.  I'm hoping that caution will stretch to things like cars and boys and crossing the street, but one can only dream.  She can ALSO crawl backward, but it's by accident when she's reaching for something in front of her which just pisses her off. 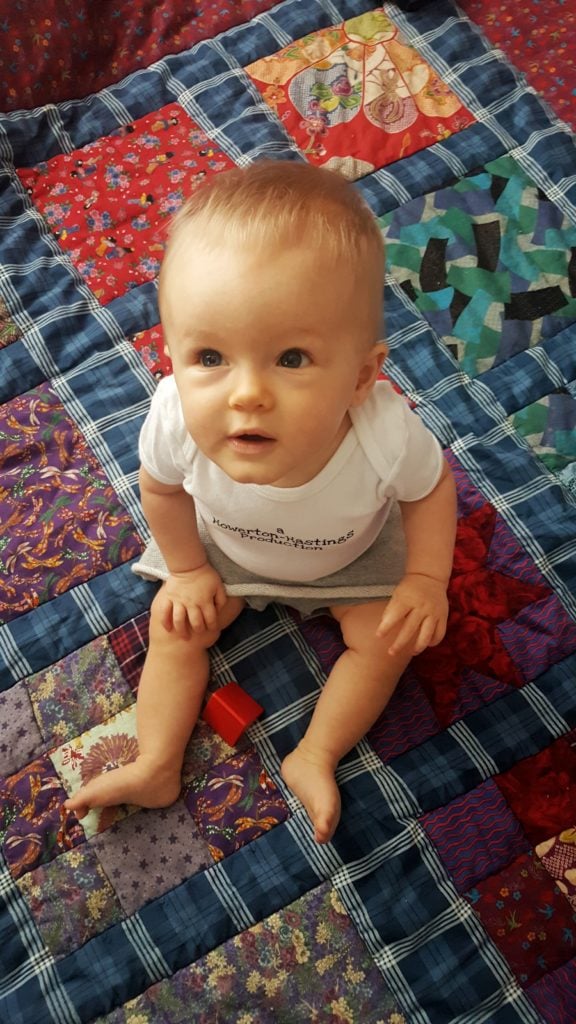 Also. I think she's teething.  For about 5 days there has been more drool than usual and Beck has been needier than usual, which is saying a lot considering that we do every.single.thing. for her.  So maybe not needier, more like...whinier?  clingier?  All of the above.  Less play time alone that doesn't yield crying is what we're dealing with, and lots of ear pulling and gnawing on everything she can get her little mits on, which just makes me feel sad for her because no one likes feeling whiny, you know?  I get it.  I don't like myself when I'm whiny. 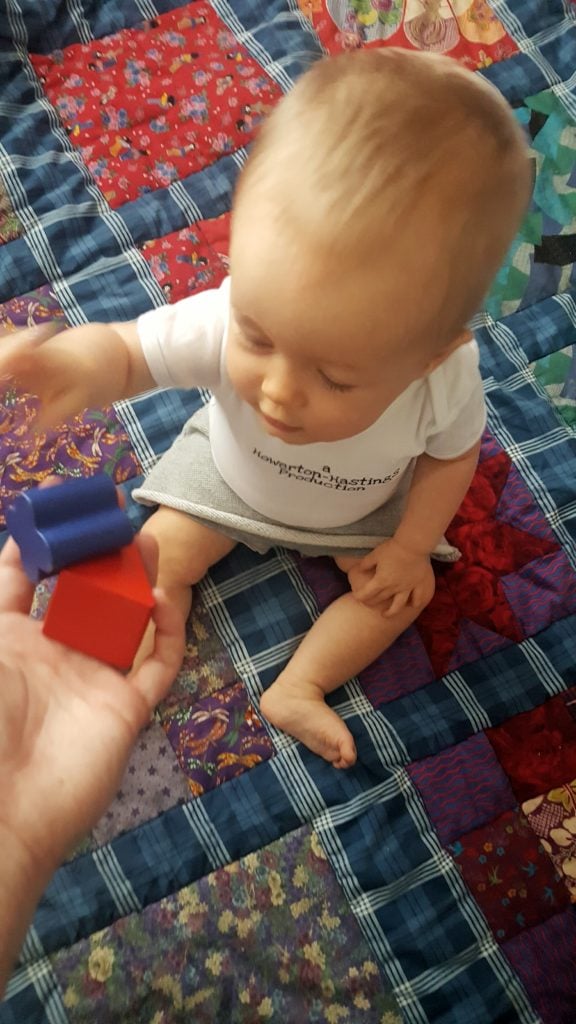 This month marks the first time that I've bought any toys for Beck, which is boring for you but exciting for me. We were so lucky to get lots of hand me down toys, and, frankly, little babies don't need that many toys, but I've been feeling like maybe we need a little more excitement around here (read: I'm bored of Beck's toys), so I went to TJ Maxx and raided the Eric Carle stuff.  I'm not joking, I love The Hungry Caterpillar so much, and what's that about?  Maybe I just wish someone would celebrate me for eating everything, tbh. 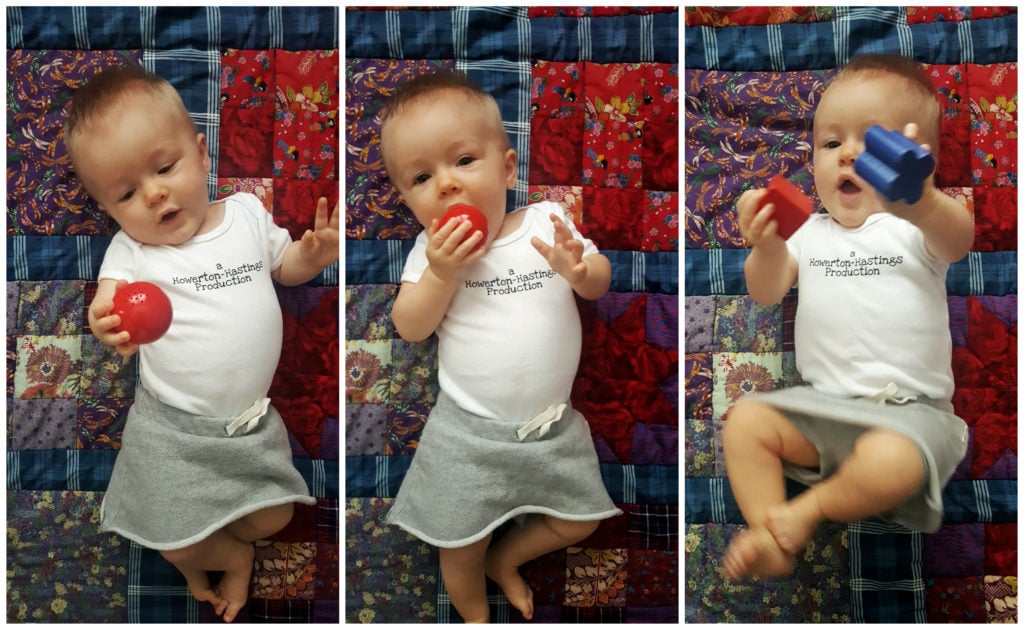 Personal eating issues aside, new toys are actually really fun and, while I'm pretty conservative with my purchasing, having things that Beck can stack and throw and shake is the most fun ever.  She's very into rattles and banging blocks together, and for the first time it's fully intentional, which is cute/annoying.  I'm pretty sure that makes her smart, though, so I go with it.  On days that I'm home with her I try to carve out blocks of time where we lay on her floor together and look at her stuff.  Toys scattered around, practicing our scooting, and obviously Insta-ing the whole,  thing because otherwise people might think that I'm a bad mom AND I'M NOT because I lay on the floor and Instagram pictures of my kid which is like the definition of attentive.  Right?  Right. 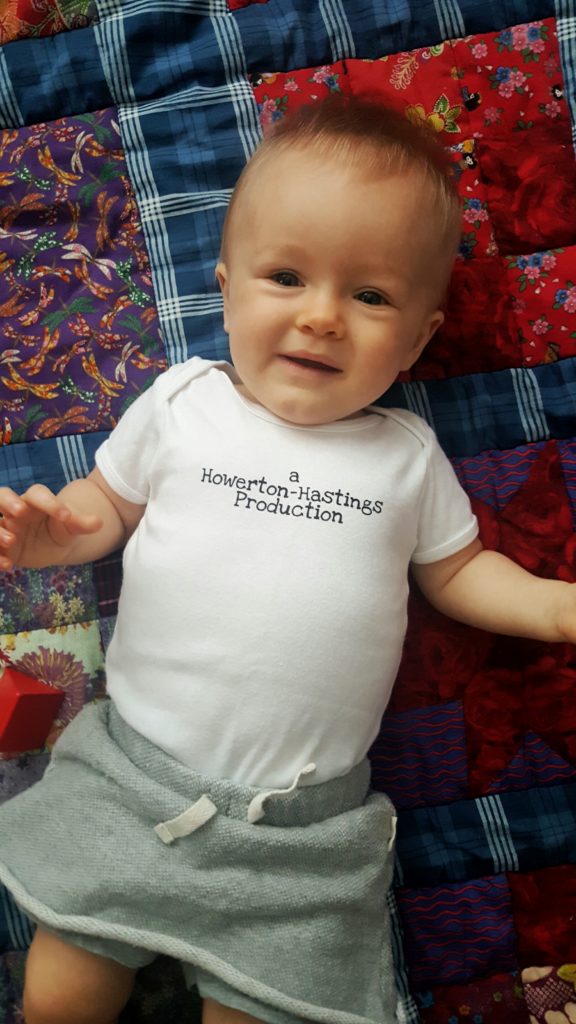 Anyway, you may have also noticed on Insta that there are a lawwwwt of videos of this girl eating.  We still mostly feed food that I've mashed up or pureed, and have started giving more finger foods to mess with, but mainly I avoid that because they're so damn messy, which is clearly the definition of BEING  child, but still.  Ugh.  So many crumbs.  New foods have included beef (short rib, and just you wait for the recipe you get to see it in), gruyere, and raspberries, which gave the cutest little pucker you can imagine.  Baby sour face also = so stinking cute. 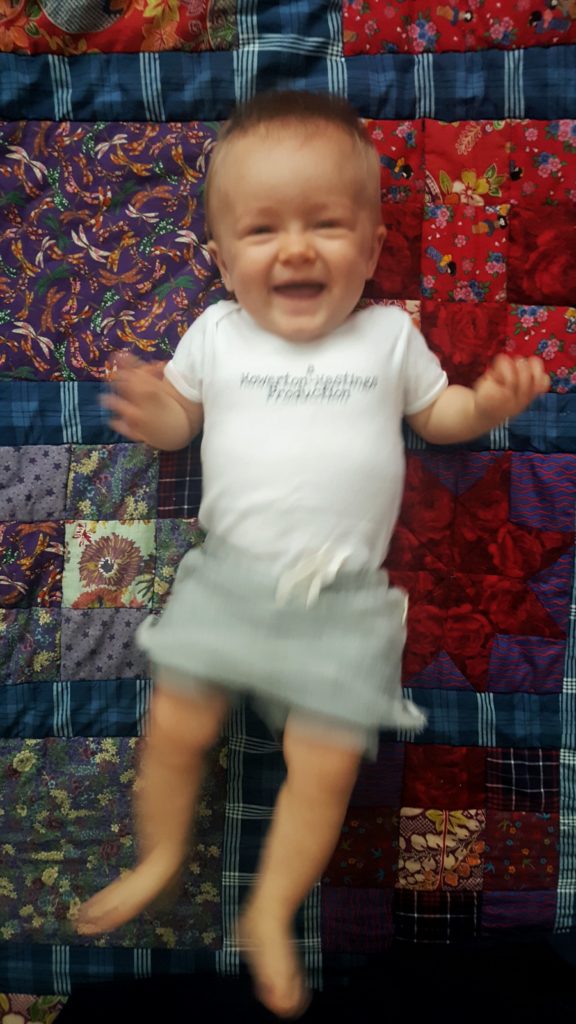 Sleep is HAPPENING.  I don't want to jinx anything, but for many moons we've gotten 2 naps per day with no crying, 7:30pm bedtime, and sleeping until 7am with one waking to nurse for about 10 minutes.  I can so deal with that, people.  It means we get nights together, more big chunks of time during the day to get stuff done, all the good stuff.  AND, Beck slept through the night for the last 2 nights.  I'm not saying it's a done deal, but both nights I've woken up around 5 (when she's been nursing) like....eh?  baby?  I hear her rustle around in her crib right when I think she should be getting up, but she just....doesn't.  It makes me sad and happy all at the same time, same with just about every milestone these days. 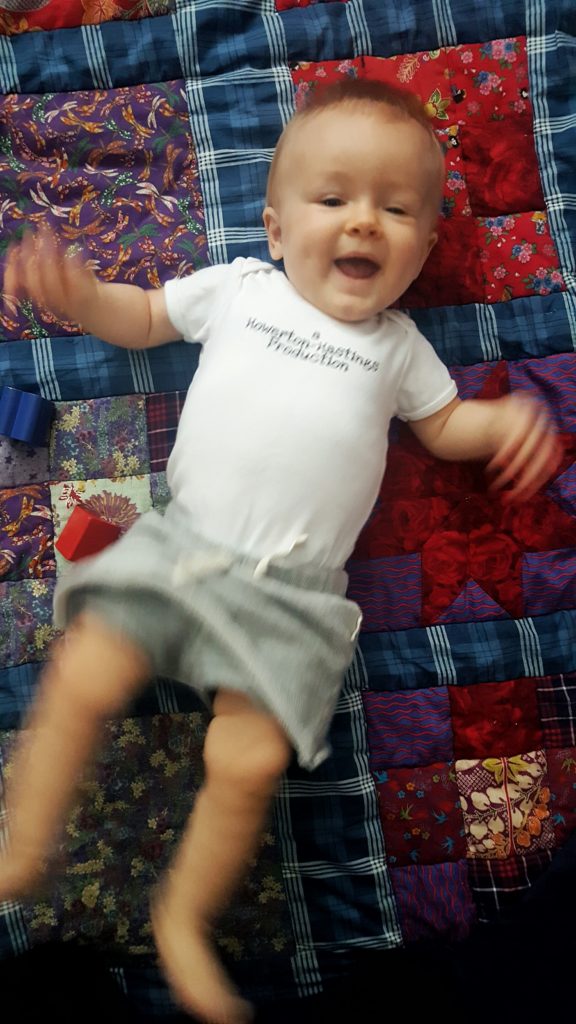 Overall, and this WILL jinx us for a second child, I really think we're lucky in that Beck is so good natured.  Even if she's zonked and clingy and tired, she can kind of hold her emotions at bay as long as she's being held or has a rattle of some sort, and the fact that she can play by herself for any length of time is just so sweet.  Good natured is different than happy, I like to tell myself that she's more even keeled than that (until she's 2, lasting until she's 17...), and it makes her so much fun to be around.  Smiles and big eyes at every new thing, which is just about everything, is where we are these days, and it gets better with every month. 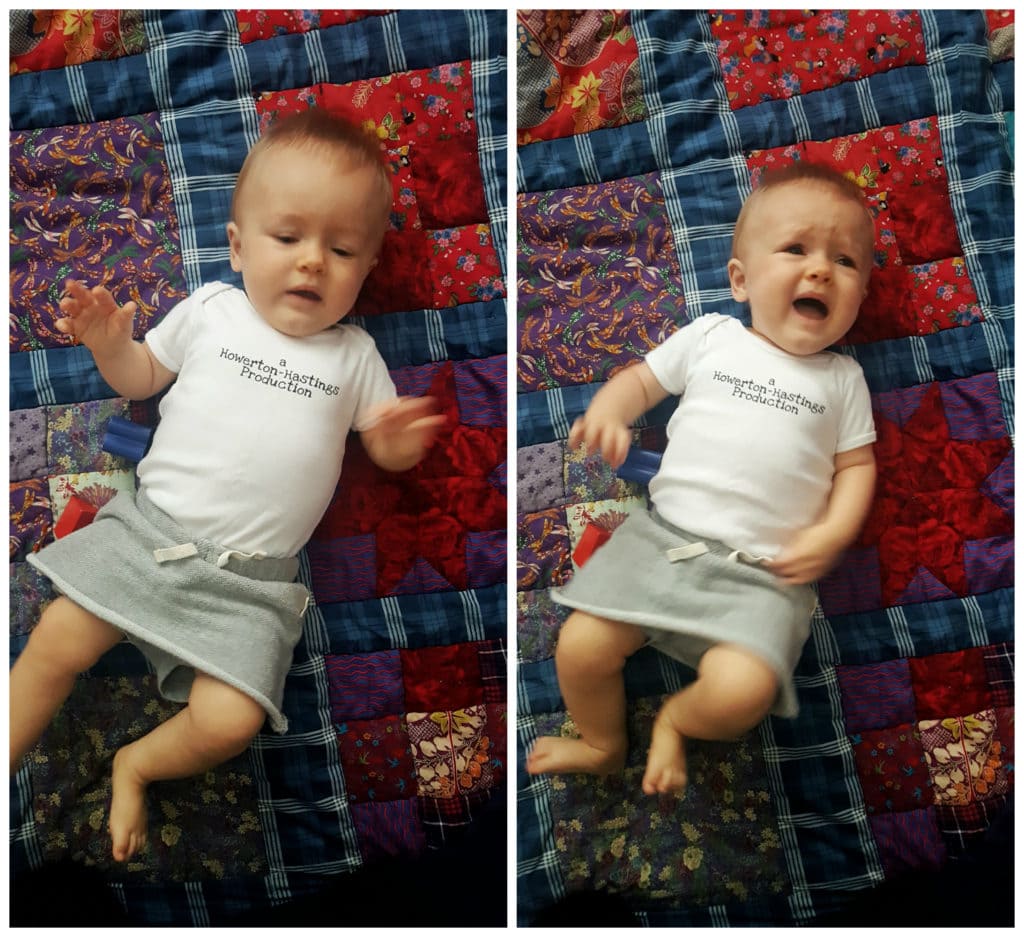