My baby is 7 months. 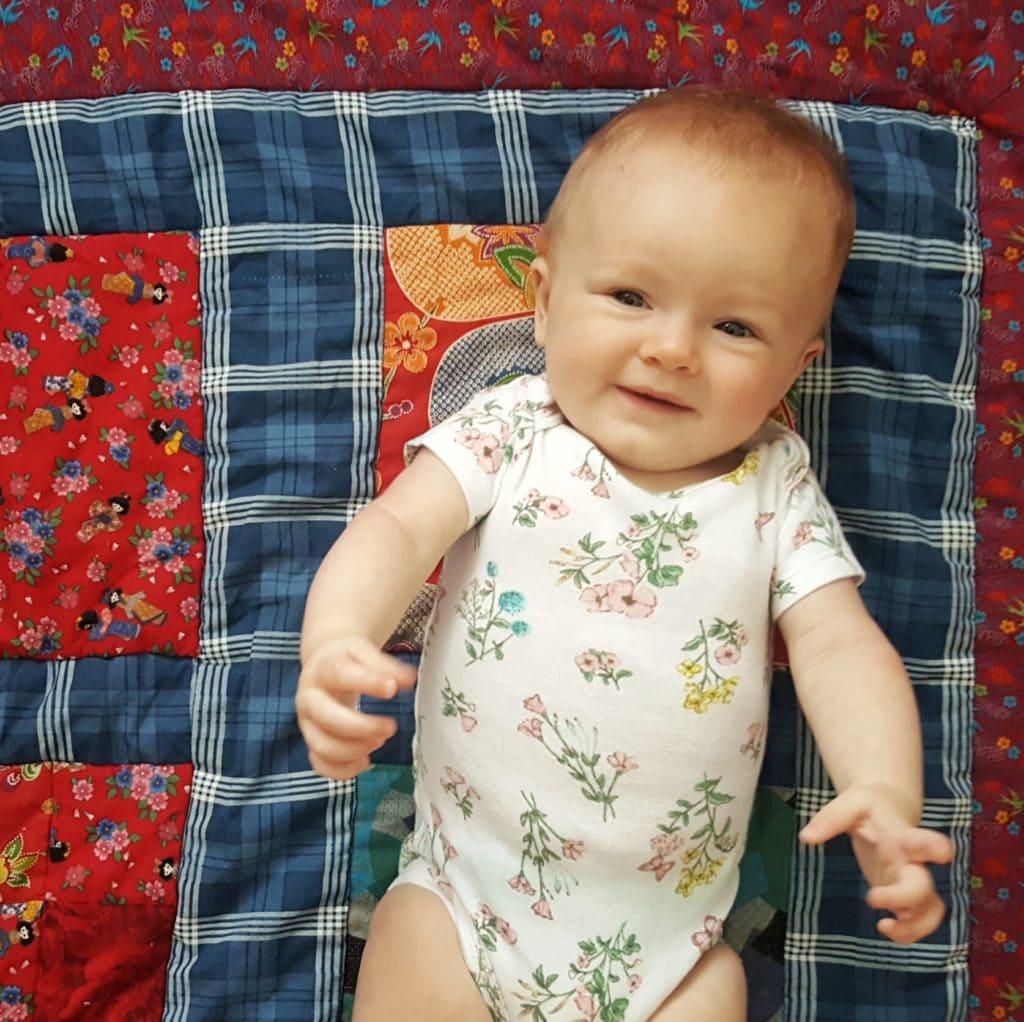 This month has brought a lot more motion, and we still feel like Beck is THIS  CLOSE to lots more official milestones.  Like, she scoots in circles and has nudged forward a few inches but isn't technically crawling.  She sits for pretty good periods of time but then kind of wobbles and doesn't seem to care at all.  Is this a thing with girls?  I don't think she's really behind, but a few babies her age that we know are doing more stuff, but they are all boys.  And then of course I think OMG SHE IS RETARDED AND HAS AUTISM AND PROBABLY CANCER or that I'm just not doing enough to help her develop.  But really she's probably just content for me to hold her all day and never do anything.  We do have very intentional flopping about which is hilarious to watch, and because Beck is reliable in rolling both ways whenever she wants I have only minimal fears about her dying in her sleep. 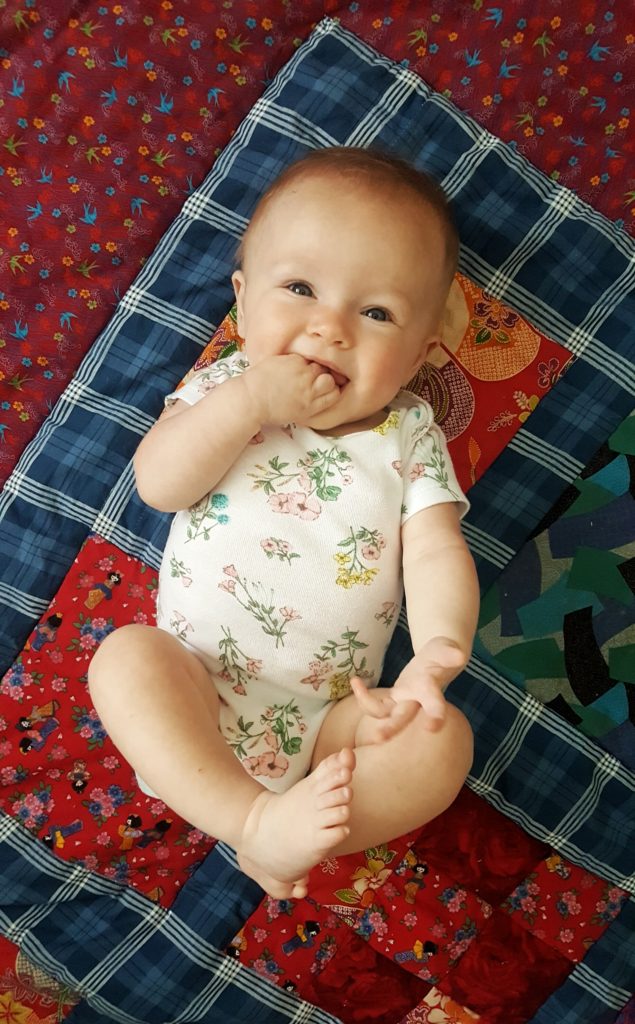 Speaking of sleep.  Sleep!  It is here!  In the last few weeks Beck kind of got it, finally, that we want her to sleep for most of the night and a few times during the day, in her crib, without much drama.  We did a lot of different training and nudging and reading and kind of cobbled together a method that we felt worked for her when she was ready.  There are definitely babies who sleep longer stretches earlier, but as it stands Beck sleeps in her crib from about 7pm until 7am, waking once or twice for about 10 minutes to nurse.  She takes 3 naps per day in her crib, stroller, or car, depending on where we are.  If we're home it's always the crib and she goes down like a champ 80% of the time.  I think I'll write way more on what we did because it's something I've been getting asked a lot, but the big thing was moving her to her crib.  At Beck's 6 month appointment her weight gain had basically stalled, which stressed me out to high heaven but the ped didn't seem too concerned about.  After that visit we started solids and Beck gained nearly a pound in 2 weeks, so we got the all-clear to move Beck to her room and start sleep training in earnest.  Prior to that we had her in our room because she was nursing so much, and we wanted her weight to climb steadily before we started not feeding her anytime she asked for it.  WELL, the very first night she was away from us she slept almost 6 hours straight, and has done so every night since then.  We had thought for some time that she and I were waking each other up, her mutters woke me up, our bed creaked and woke her up, etc.  I do think she does better in her own room, but I'm still 100% glad we kept her with us for so long.  The research relating to decreased SIDS and cosleeping (in the same room, babies do better in those early months), bonding, nursing, all the good  stuff we got from it was well worth the sleep lost in those early months.  She hasn't slept in our room in over a month but we still have her little Pack N Play next to my side of the bed, which is super handy for toys and clothes to be strewn into.  Ahem.

I've been thinking a lot of the passing of time as it relates to having a baby, and I think I'm starting to get what seasoned moms mean when they kind of eye roll and shrug and say "eh, they're not ready yet."  Thinking back on sleep especially, in the early days I did so. much. reading on the subject and whyyyyy my baby was broooooken and whyyyyyy she wasn't sleeeeeeeping and, mainly she was a teeny little thing who wanted to be snuggled.  5,10, even 15 weeks is LITTLE, and we as parents feel like surely some progress should be made by now because in the moment it feels really long and tedious and helpless, but really most babies will figure out most stuff in a time frame that is age-appropriate for them, even if it doesn't match up exactly with the books or the neighbors or your in-laws memories of their 47-year old children, you know?  I remind myself of that approximately 9,837 times per day, that mostly everything is going to be fine and stuff will happen when stuff happens, and to mostly not rush any of these first periods, because they happen so quickly. 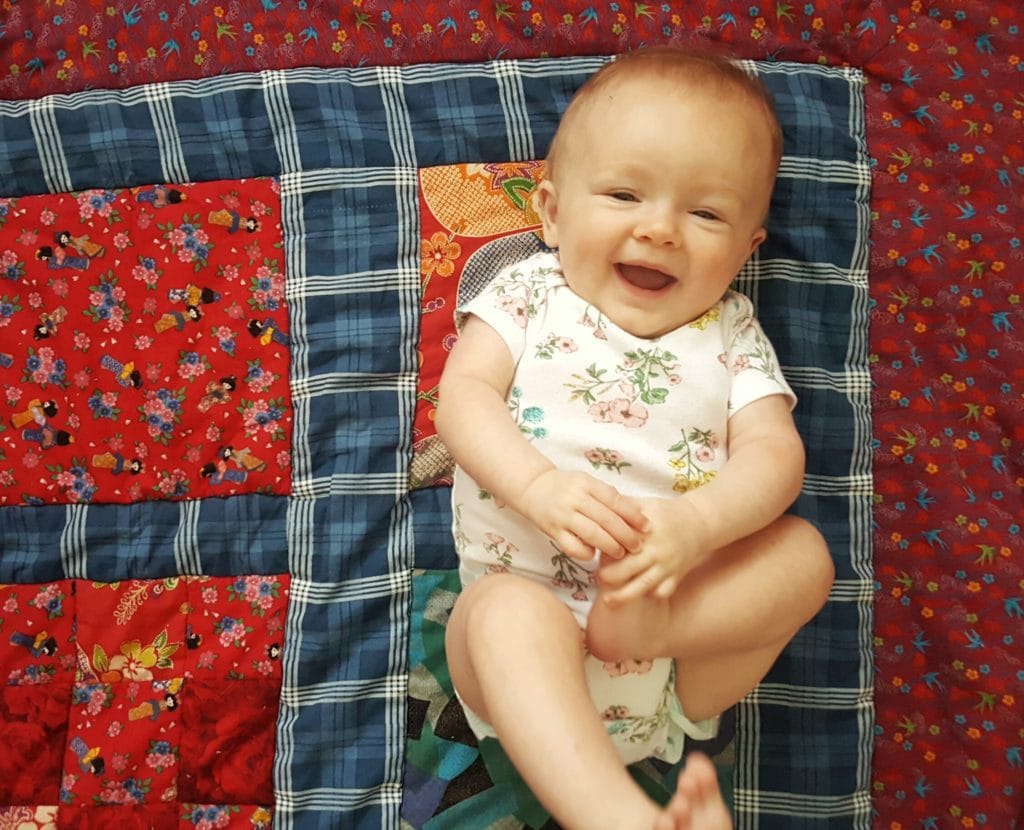 Play has become increasingly fun with Beck, she really engages with her toys now and is very good at getting herself from one toy to another by rolling and scooting.  She also gets a big kick out of lying on her back "talking" to certain toys, which I love to watch because it's so cute.  I can tell she's starting to mimic sentence structure and inflection, with nonsensical syllables of course, but it's the greatest to watch.  She's also ticklish!  She has this weird silent laugh that we think is adorable where she grins really big and her eyes get all squinty, and every once in awhile if we catch her juuuust right she'll giggle out loud, and we just melt all over the place in giant parent puddles.  Babbling + tickle giggles are my fav things this month, for certain.  She has also started squealing, these little bursts of surprise and joy that are so stinking cute, but thank goodness she isn't full-on screaming yet (ever?) like some kids do.  My kid is perfect, is what I'm trying to say. 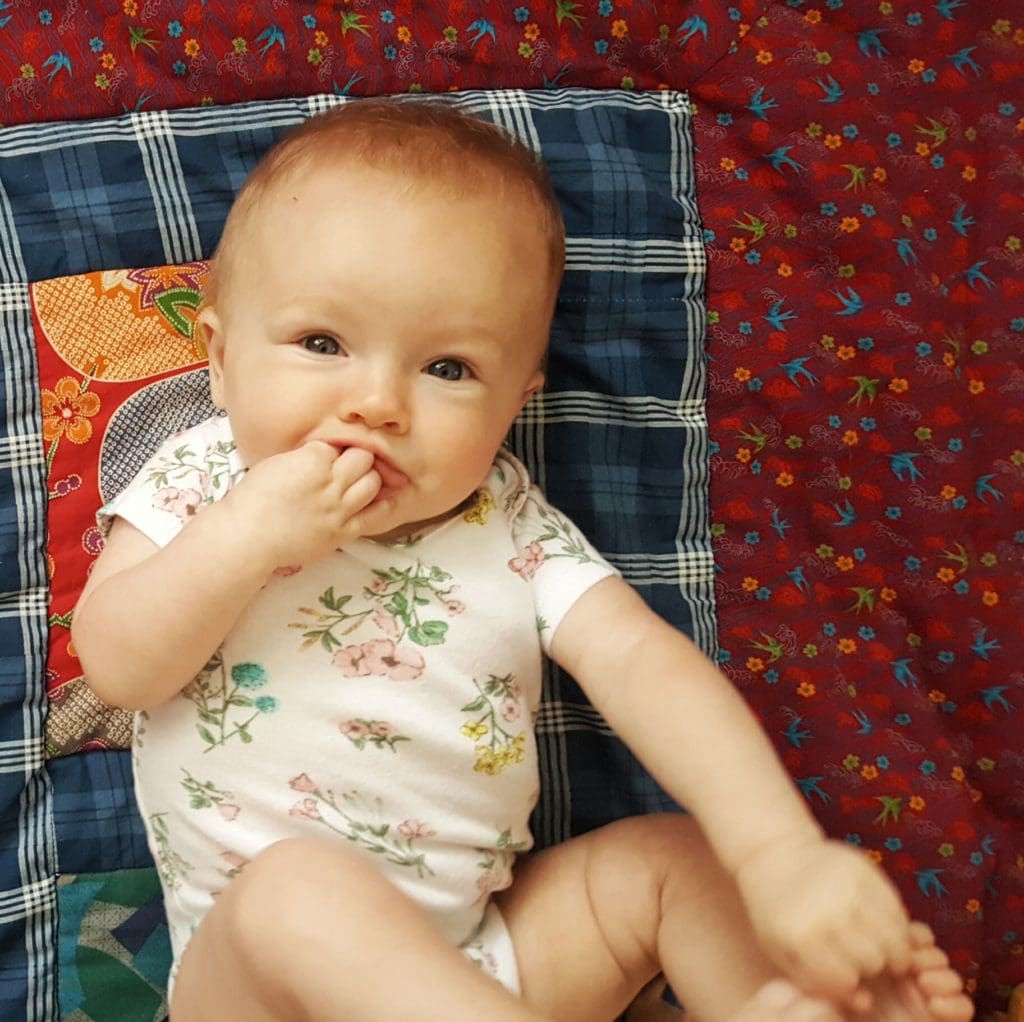 Food is my other fav thing this month, we started solids and yummmmmm she loves everything she's tried.  We do spoon feed chunky purees because we wanted her to gain weight pretty quickly, and I will say that the baby-bird feeding aspect of purees is so stinking fun.  Every bite, Beck works the food around in her mouth, swallows it, grins, and opens back up.  The grin is clearly my favorite part of the whole operation.  Feeding is, of course, another thing that takes tiiiiiime, but it's also a nice way to break up the day because, let's face it, babies are boring (name that sitcom).  Adding solids to nursing is another fun activity, though, and I love coming up with new things for her to try.  Sweet foods go down the hatch on day one (fruit, calm down), and salty/savory stuff like cucumbers take a little more getting used to for homegirl.  We haven't found anything she won't eat after a few tries, though, so I'm very hopeful for a good eater. 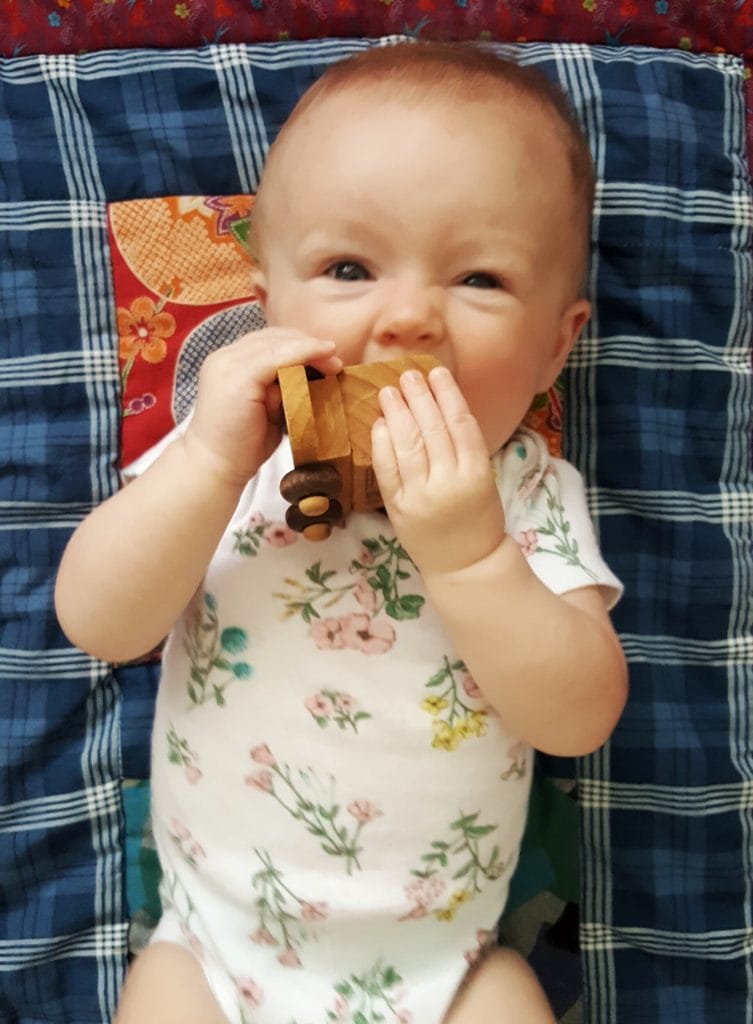 So that's it!  Food and giggles and naps and chatting make for a glorious 7 month old, and we're loving it more every day.  Also please try to envision Jay scooting his elbows back and forth on the ground saying "come on, all you have to do is move your elbows and kick and you'll go forward!"  He has legit tried to "teach" her to crawl and it is the absolute best thing ever.