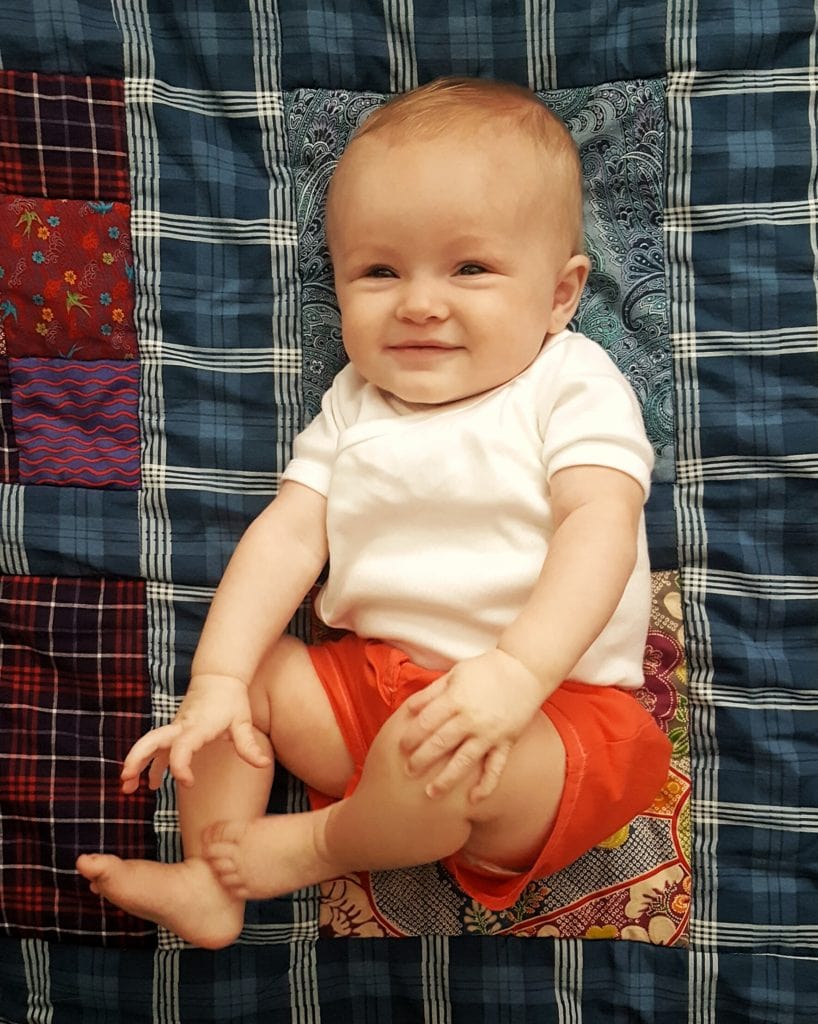 Not even in all caps, there's so much gravity to this situation.

She's like a person, you know?  A really stinky person, I think she might need more than one bath per week.

I've said it before and I'll say it again, I really think that there should be birthday celebrations for parents, not so much the kids.  The celebration is hurray here is a cupcake you kept her alive for 6 months, high five!  I'll feel elated if we make it to thirty.  What a feat.  I really don't know how so many people live past 2 years or so. 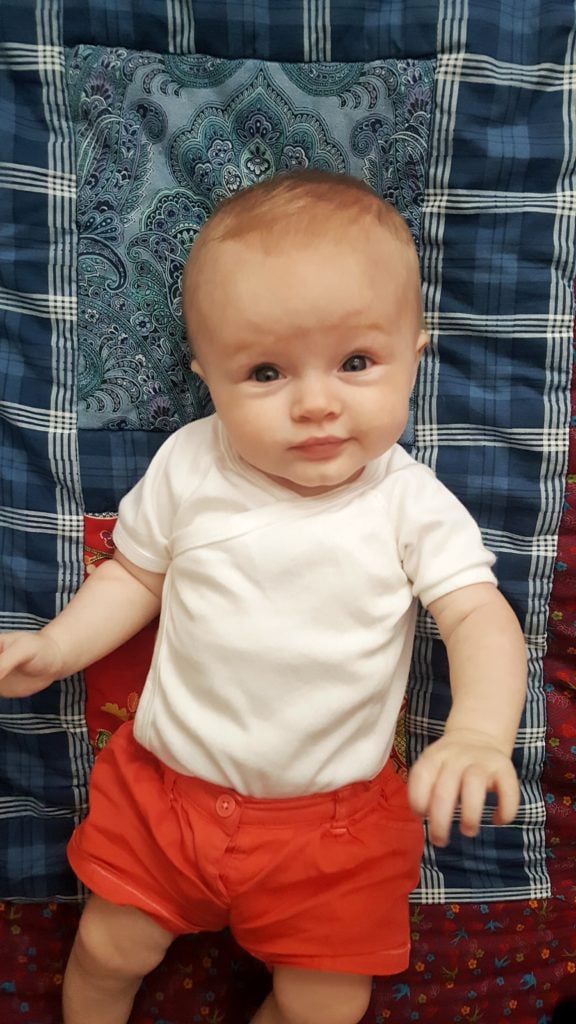 Beck this month is in a funny stage of being super duper "busy" but also not being able to do anything.  She wants to eat food but doesn't yet, wants to get to things but can't crawl, wants to play with toys and books but can't sit up on her own.  Poor kid.  It's super funny to watch, and she makes this ridiculous concentration face when she's playing with new stuff or trying to get to things.

Of course, we have a house full of toys and all she really wants is the remote and my cell phone.  Yesterday at my parents' house I located an old Blackberry, so Beck officially has her OWN phone.  I imagine she'll be interested in it for approximately 90 more seconds until she figures out that it doesn't turn on anymore. Actually, it probably does, but I think I will have an existential crisis if I pay for energy to charge a 10-year old Blackberry.  Toys in general are one of the new additions to our lives this month, she's way more interested in what we have and I try to spend time with her actually playing on the floor every day.  I haven't noticed any particular favorites, but stuff that makes noise seems to keep her attention for longer periods of time, lucky for us. 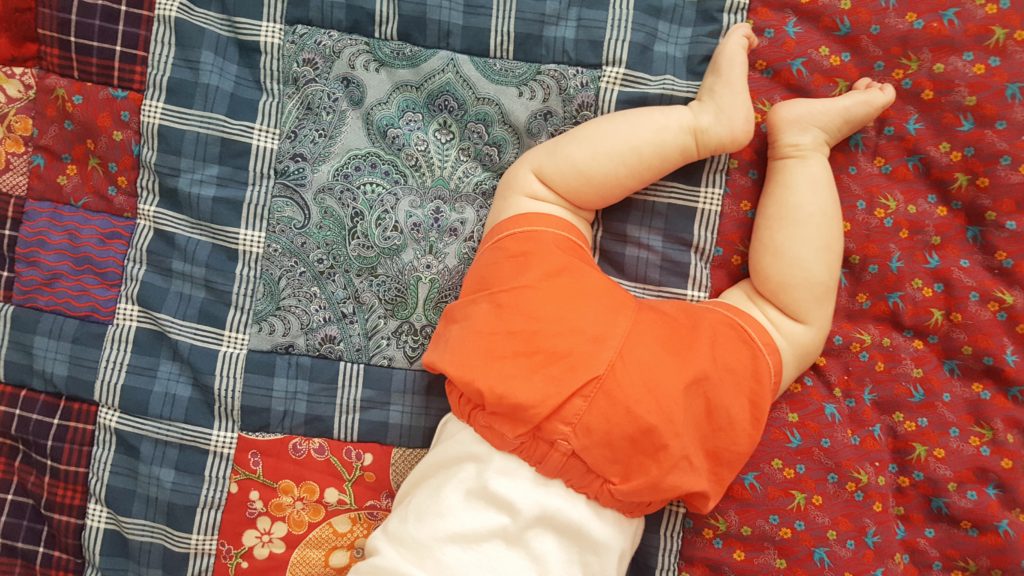 Skills are JUST around the corner, I can feel it.  Beck's getting better at sitting, and can manage herself pretty well as long as she's leaning forward, but if she gets to leaning back she fully forgets that she was doing a thing and just topples.  She doesn't seem to mind at all, so I just go with it.  Same with crawling, there isn't any actual forward locomotion yet, but her knees are starting to move LIKE she's crawling when she's on her stomach, and if she wants something badly enough (or is pissed enough at not being picked up right. this. instant.) she'll do some definite scooting, but it's not terribly intentional yet.

Babbles and smiles are still her primary form of communication, and with some well-timed leg kicks it's just the cutest thing in the entire world.  Beck will sit in her bouncer while I do stuff and just stare at me smiling until I look at her and smile back or talk to her, and then she'll kick her legs all excitedly.  It's definitely intentional, definitely back-and-forth, and I just love it.  Despite being, by all accounts, a terrible sleeper, I think that Beck is a pretty happy baby.  Every time she babbles mama or dada I'm all THIS IS IT SHE'S A GENIUS, CONFIRMATION, and then....not so much. 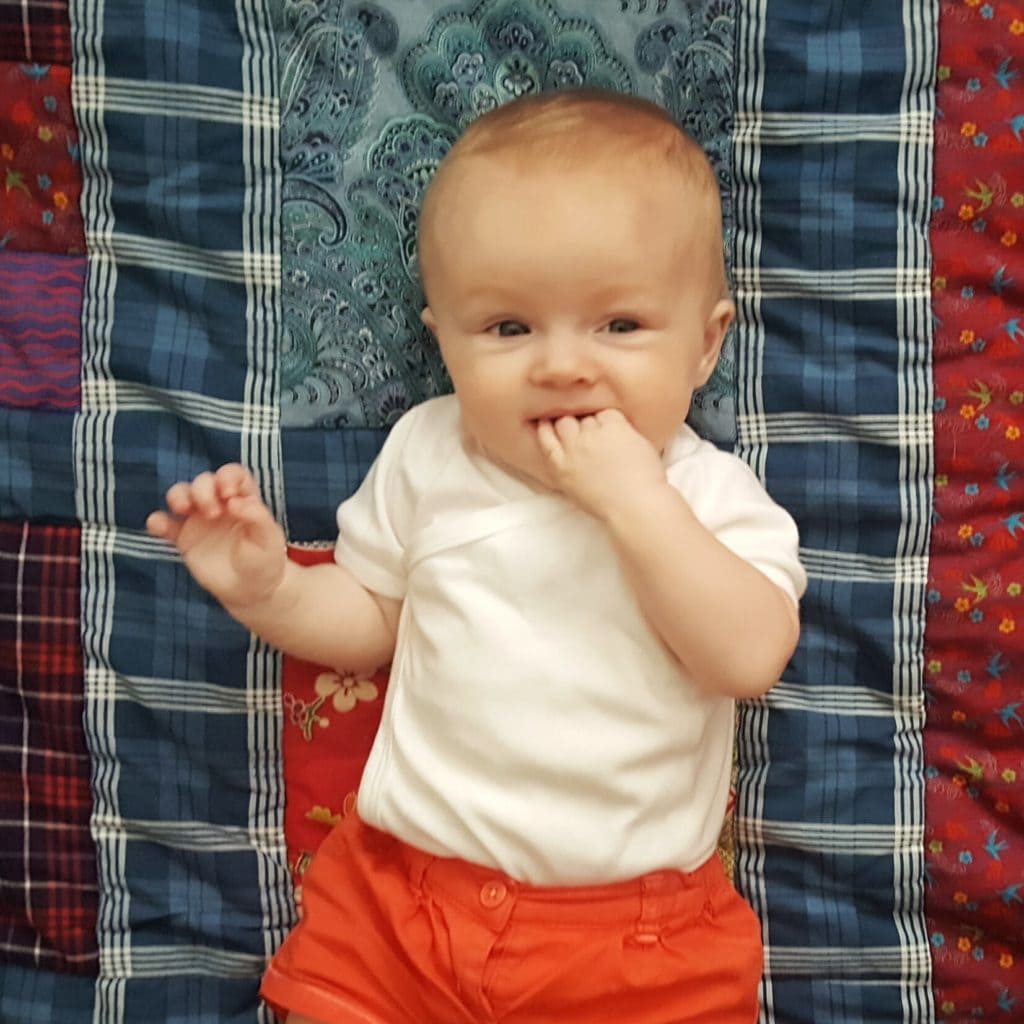 A pretty happy baby.  Unless.  There's always an unless, right?  Beck has fully mastered object permanence AND manipulation, and I'm her favorite target of both.  She will be happy as an effing clam with anyone else in the world, and if I walk in the room and not immediately to her she starts to fuss and cry.  WHY.  Boobs?  Snuggles?  She knows I'm good for anything she wants 24/7 unless I'm pooping?  (definitely yelled that at her from in the bathroom while she was squalling the other day MAMAS ARE ALLOWED TO POOP.  great parenting moment)  She doesn't do it with Jay, but it's as simple as if I turn my back to her while I'm doing something she'll cry until I turn toward her, then smile.  She knows.  I do this weird thing where I cook facing her while kind of chopping and stirring sideways.  I'm such a sucker, and wouldn't be surprised at all if I cut my finger off doing that one of these days.

We have our 6 month pediatrician appointment today, and if we get the go-ahead we're going to start solids, well, tonight?  We've started giving Beck a few bites of things here and there, and she loves everything she's tried, down to lemon wedges and blue cheese.  It's really fun and also I feel like I'm not going to take her to a restaurant until she's 7 years old, does that sound right?  She needs to work on her motor skills but I just can't let her do it in public, it's so effing messy.  She threw half a lobster roll on the floor last week and I almost punted her out of the booth.  But I didn't, so I think that makes me a pretty good mom.  I absolutely love watching her eat and get all excited, but it makes me sad that she won't nurse exclusively forever.  I super duper hope that she still at least likes nursing once we add food, but making it to 6 months with as much success as we've had is wonderful too. 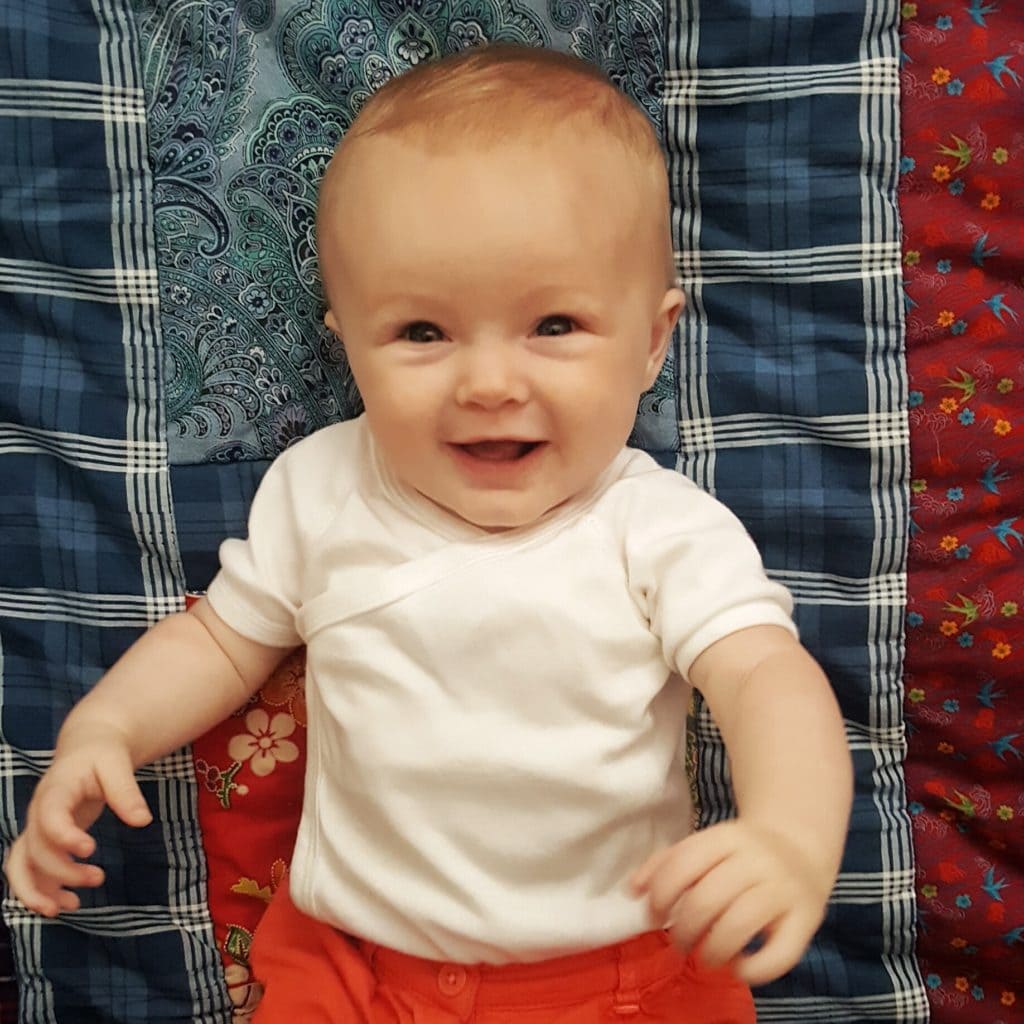 Sleep is still our downfall, and I'm ready for even more sleep training suggestions.  We've been crying it out for naps for about 3 weeks, and it's WORKING.  I don't fully cry it out, but I let her cry and go in to comfort her every 15 minutes, and give up after 45-60 minutes.  I do that 2 times per day, MAYBE 3, but that's only happened twice.  In general, she'll go down like a champ for ⅔ naps, which is infinitely better than a month ago, and some days it's all 3!  I think the reason it took more than the magical 3 days that most people tout for cry-it-out sleep training is that 1. naps are harder than night and 2. her schedule is different every day, and I just can't change that right now.  She's with me most days and with my mom a few days a week, and those things aren't the same each time either.  Roughly I put her down for naps when she seems tired 90 minutes to 2.5 hours after the last time she woke up.  Bedtime is 8-8:30 and she wakes up at 7am almost every day like clockwork.  The problem with naps is that she doesn't stay down for very long, and I'm not sure how to handle that.  Is she hot, cold, not comfortable?  I think by this stage she should be sleeping for an hour or more fewer times each day, but 30-45 minutes is her norm and she gets tired after about an hour.  So, I'm happy with the way naps are going but think some fine tuning could occur.  She goes down like a dream at night, but still wakes up every 2-3 hours to cry slash nurse because I allow it.  This week we've been putting her back down without nursing about half the time (just trying to stretch her to 4-6 hours between eating), and it's been working well BUT Jay is super tired because it involves him more and he works about 8,937x more than I do.  I would LOVE your thoughts on honing in on our nap skills (without a strict schedule, I know that's taboo to even mention but it's just not possible for our lives right now) and night weaning. 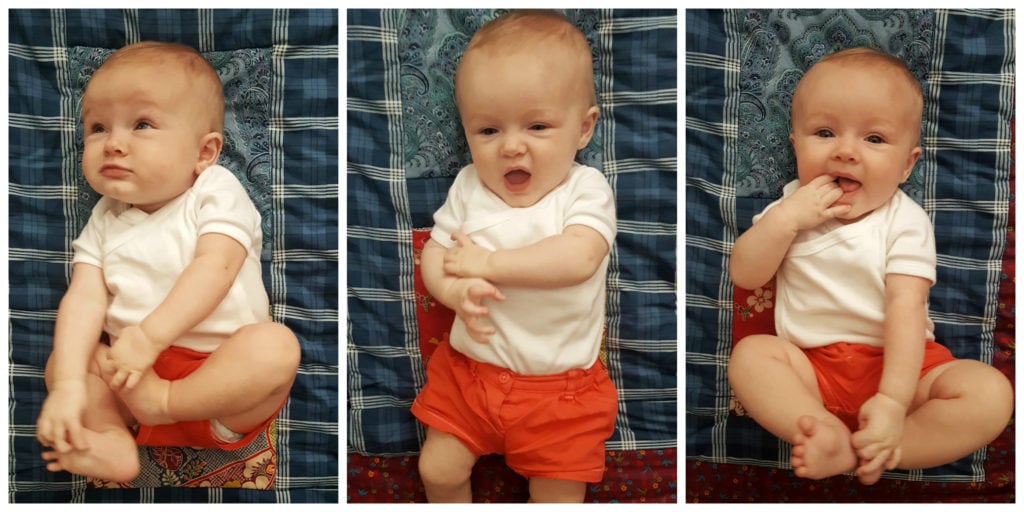 So there we are, our big and little at the same time 6 month old.  She's basically a dream, and sometimes the worst, but I think we are so lucky that she hasn't gotten sick, or hurt, or had any major issues so far, knock on all the wood.  So we'll give her lemon wedges and wait for sleep to come, and cross all of our fingers that we stay on this path.