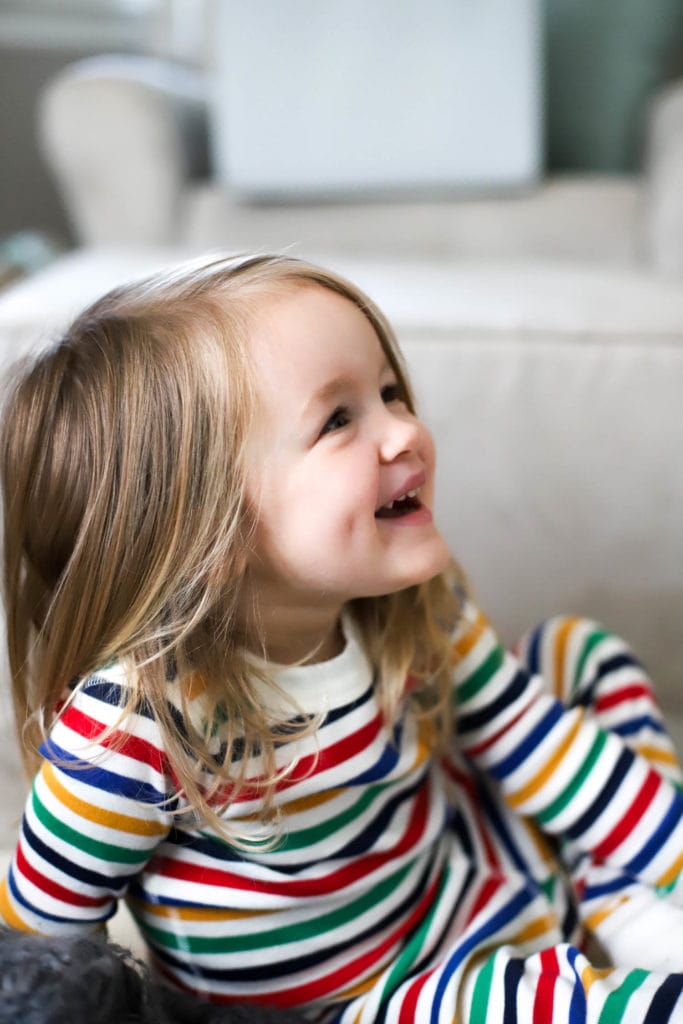 The birthdays are always the most nostalgic and the most fun all at the same time, I think. I wonder, were my parents ever sad or weepy on our birthdays? I don't remember them talking about it, but maybe they just didn't tell us. All day on Beck's birthday (and the day before at her party) I felt so nostalgic for the present and the last three years. HOW is she so big! Jay was talking to her about her vocabulary the other day and asked her how many she knew, and I was thinking....all of them. She can't really talk about engineering with much finesse, but she's fluent in English, which is strange and obviously a good thing. 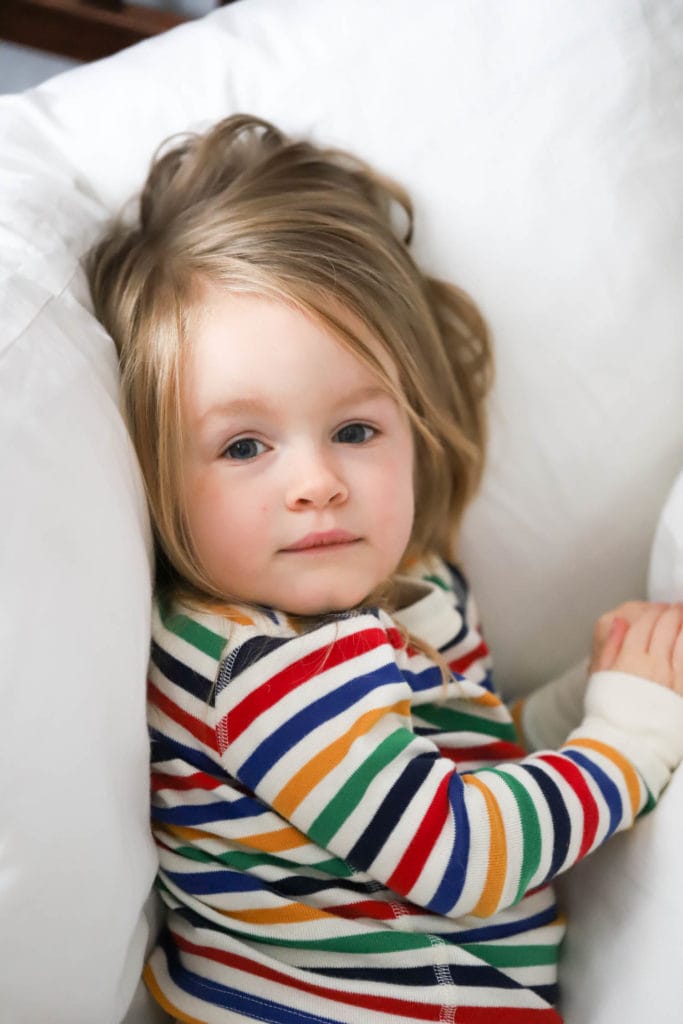 Beck's biggest development this year has been HEY HERE'S MY SHITTY ATTITUDE, which, they tell me, is normal. We are still kind of flabbergasted by it, the horror mainly surfaces at naptime and bedtime. Picture it: Homegirl weighs 29 pounds soaking wet. Her hair is about as big as her body. Wardrobe is exclusively big dresses or jammies, no middle ground. And we'll have these hours where she's just charming, running around fetching things for Will, telling wild stories, singing songs, playing doctor with her dolls, all of the things. And then we mention bed and it's a completely different person. It starts with a complete shut down. Dead behind the eyes, "do not tell me things about bed!" followed by a terrifying ascent to full-on Crazy Town. We have to force her into a diaper change, wrestle her into PJs, decide how much we care about her teeth being brushed, and then drop her in bed like a hot potato, at which point she SCREAMS that she doesn't want us to leave, kicks the walls, throws toys, knocks over FURNITURE, and generally loses her ever-loving mind. We stand outside holding her door shut because, while she won't leave, she opens her door and slams it over.and.over. and it drives us absolutely bonkers. And it happens twice per day. Every. Day. 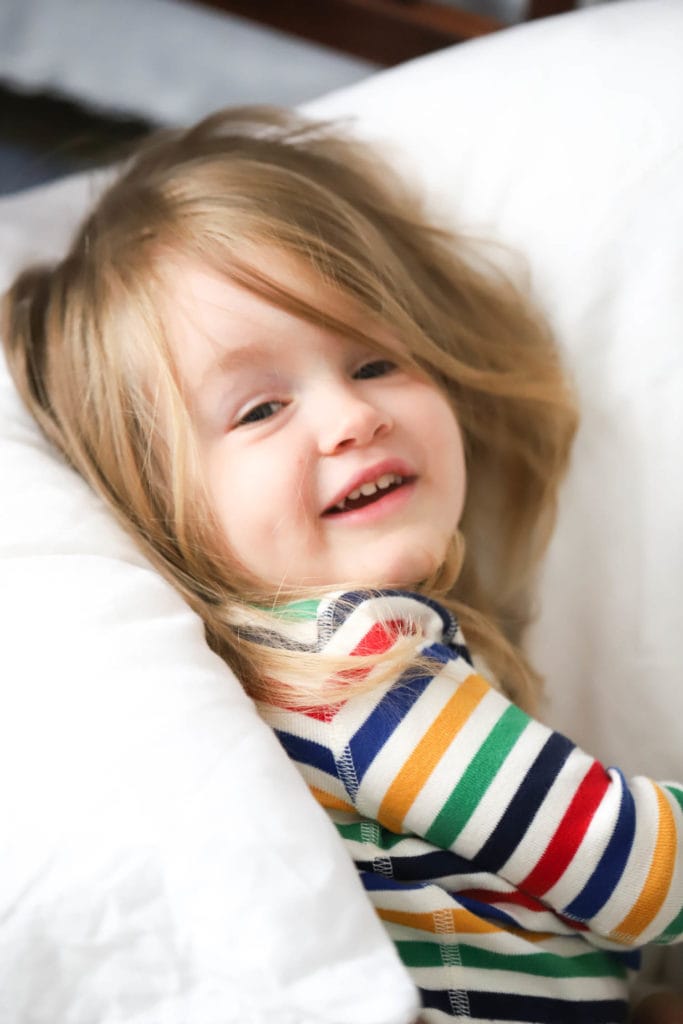 We had some friends over last weekend for dinner and they were equally horrified, grateful they aren't parents, and hugely amused at the whole situation. They now refer to her as our little linebacker, which is what it feels like. I am seriously not exaggerating about the above behaviors, it is BONKERS.

I think it's mostly FOMO. She knows we stay up after her, she knows how much fun she has when she's awake, and I'm sure things are worse now that Will is here. People have suggested that we all pretend to go to bed at the same time and I've considered that, but decided against it because that feels like enabling. I want her to know that when we tell her to go to bed then it's time, no matter what. We tried begging/cajoling/changing the routine or time, but really what has worked has been to act like we don't care, match her in dead-behind-the-eyes, tell her exactly once, and then walk away. At the beginning of all this we would both get SUPER mad, yelling and being sarcastic and taking forever in the whole process. Our anger was justified - no one likes being slapped or hit or kicked, and we were also disappointed that our perfect little sleeper had turned on us. But then we had some conversations about how it must feel to her when we yell back and turn on her in a different way. We want her to always know she's loved even we detest the behavior, we don't want her to become fearful of bedtime, and we REALLY don't ever want her to imitate bad adult behavior. She'll have her whole life to come up with bad behaviors on her own, we think. 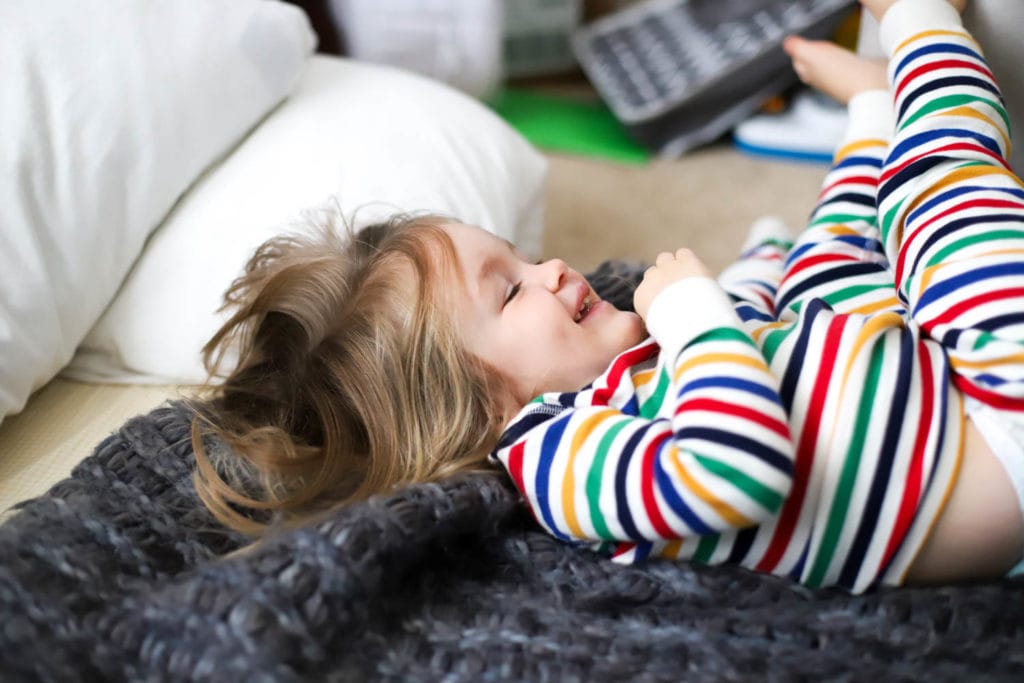 So on the sleep we are waiting. Waiting for her to remember that we have rules and we stick to them. Waiting for her to re-learn how good sleep feels. Waiting for the fighting to end. Whether or not she fights, Beck still sleeps about 90 minutes for her nap and 11 hours at night, which is why we haven't adjusted her routine any. I know she still needs the sleep, she just has to accept it. 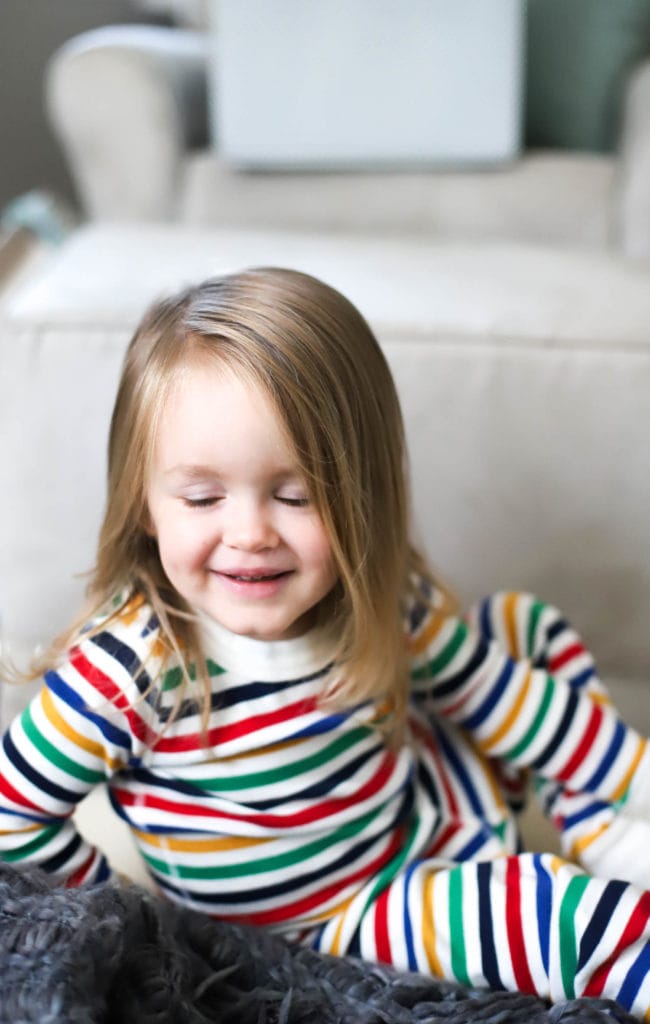 Beck's imagination is absolutely boundless these days, and it is the most fun to watch. She loves playing with her kitchen, mothering her babies, telling us about her "work friends," and reading books and watching movies to learn even more stories. She plays pretend Frozen a LOT, running into some bed, hopping under the covers, then bursting out yelling IT'S CORONATION DAY! and running around singing "For The First Time in Forever." She knows all of the words to that and lots of other songs, save for a few missed words, which we rarely correct because it's so cute. She also likes watching old Austin City Limits videos on YouTube, is a huge Bonnie Raitt and Cheryl Crow fan, and even got a harmonica for her birthday so now she is Cheryl. She doesn't really understand the concept of favorites yet, but I'm thinking the harmonica was her favorite gift by virtue of the fact that it hasn't left her side yet.

I love that Beck is getting into dance and music. I was always into them my whole life, and we enrolled her in a kiddie dance class starting in January. It's a little tumbling "where is my body in space" kind of deal, very low pressure, but I think she'll love it. We're always on the hunt for ways to encourage skills that seem to come naturally to her without a gazillion lessons and activities (because, you know, she's THREE), so feel free to share ideas if you have any! 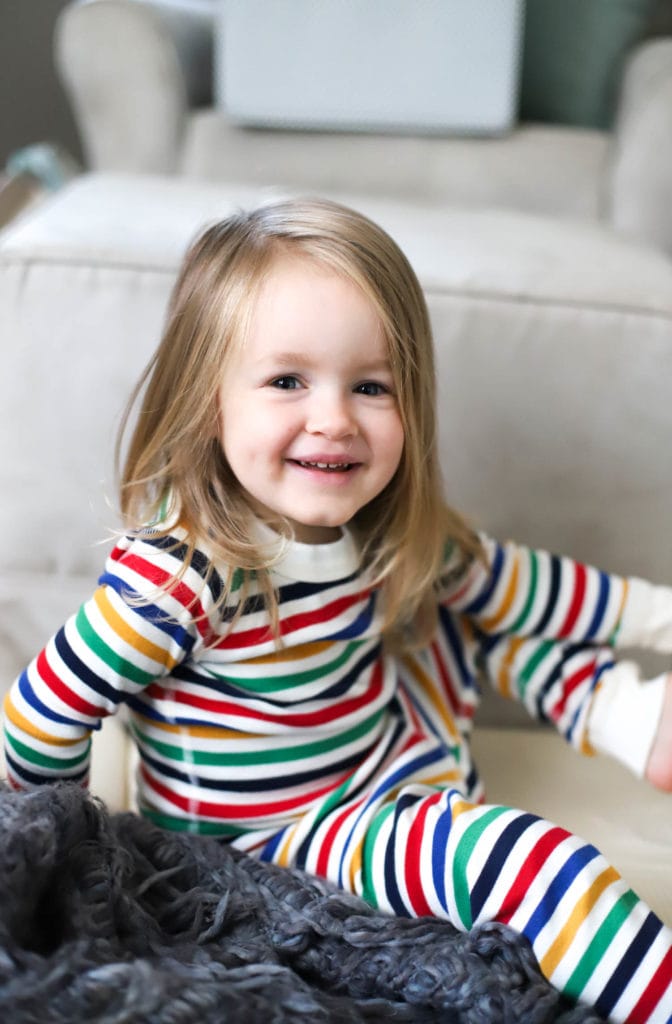 School has been a fun adjustment this year, Beck goes two mornings per week and it is the best part of her life, hands down. We never have to convince her to go, she is always happy when we pick her up, and has great stories about her classmates. Specifically she has a classmate who "always tries to escape," and we think after some digging that the child is actually trying to escape from Beck not the classroom. Sometimes Beck decides who she'll be besties with without their consent, and it seems that that is happening with this child. Beck eats more veggies at school (we pack her lunch and she LOVES helping with that), she comes home tired, she knows tons of new skills and songs almost weekly, and I'm so happy for her that the program is such a great fit for her.

Becoming a big sister has of course been a big part of Beck's year, but honestly I'm not sure she sees it that way. Since her memory isn't super long it's not like she has a ton of life experience that she remembers with Will not being here, so she's adjusted to him being around pretty easily. She reminds us that we really need to carry burp cloths around, brings him his paci, rocks him in the bouncer, and always tells me when he's up after a nap with a loud MAMA MY BROTHER IS CRYING LET'S GET HIM. She also shows him pictures of himself when she's scrolling through my camera, which is hilarious and so cute. She's obsessed with him whenever he's awake, and is getting a leeeetle bit better at being quiet when he's sleeping. She adores him, though, and I'm so glad for that.

Everyone says that three is worse than two and four is worse than three, and THEN children become tolerable again. Honestly we're at about 75% of adoration for Beck, with the 25% either being mundane parenting things like getting her to eat vegetables or the horrible tantrums that, when we remember to ignore, are getting slightly better. I don't know what this year will hold for her, but the joy we have in watching her grow up is so far much greater than the miserable stuff, even when we're in the thick of it. 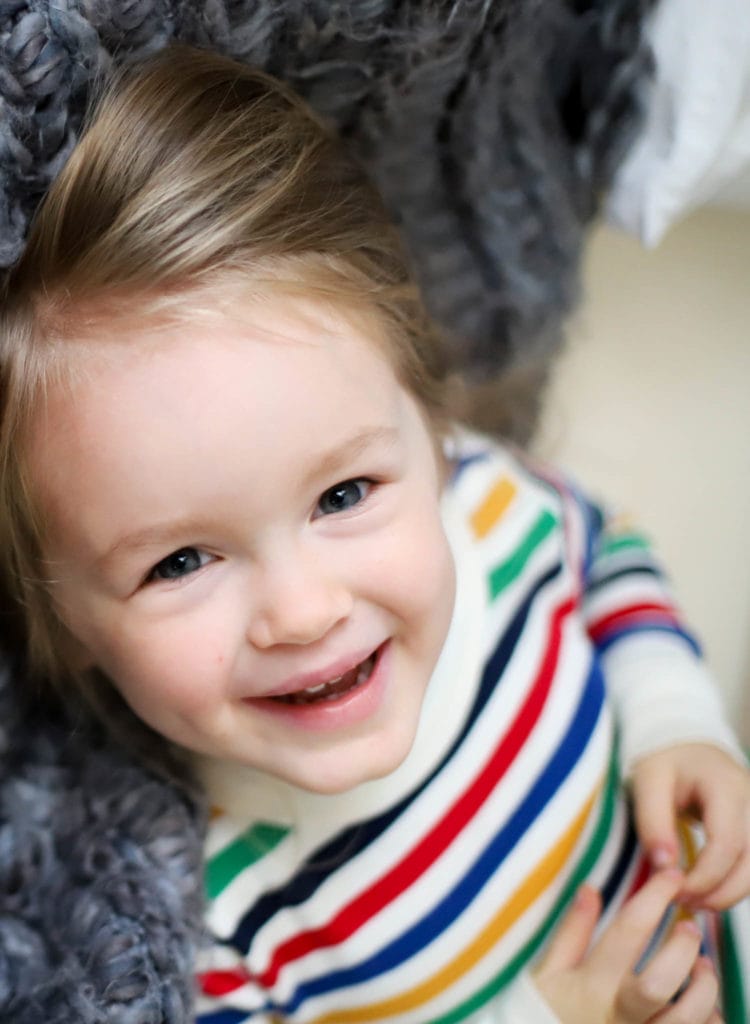 Also. Beck is still not potty trained, has no interest in potty training, and we just...haven't done anything about that yet. Suggestions welcome.