WHAT, THREE MONTHS!  That means we made it through the 4th trimester, homegirl is fully AWAKE, and we're like totally parenting experts and nothing can sway us. 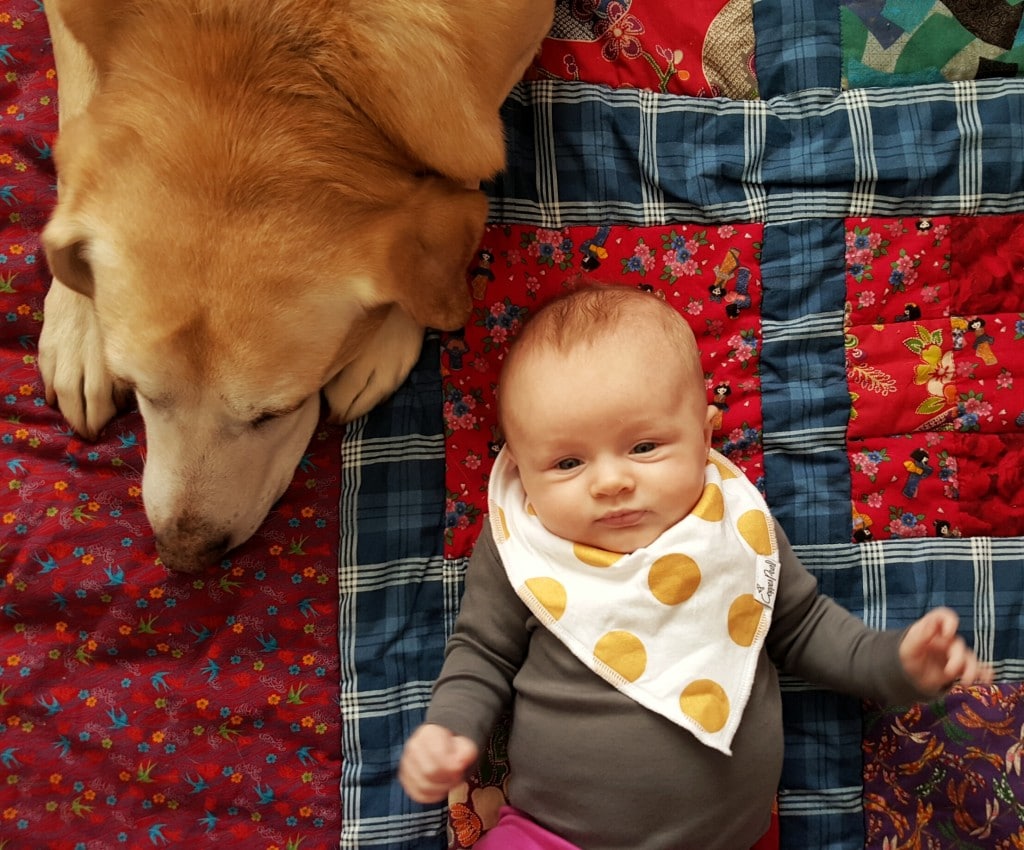 I mean, really.  Babies are so weird, and they change a lot.  Exactly one nanosecond after I think I've figured anything at all out, this girl changes it up on us.  Story of everyone's life who's ever had a baby? 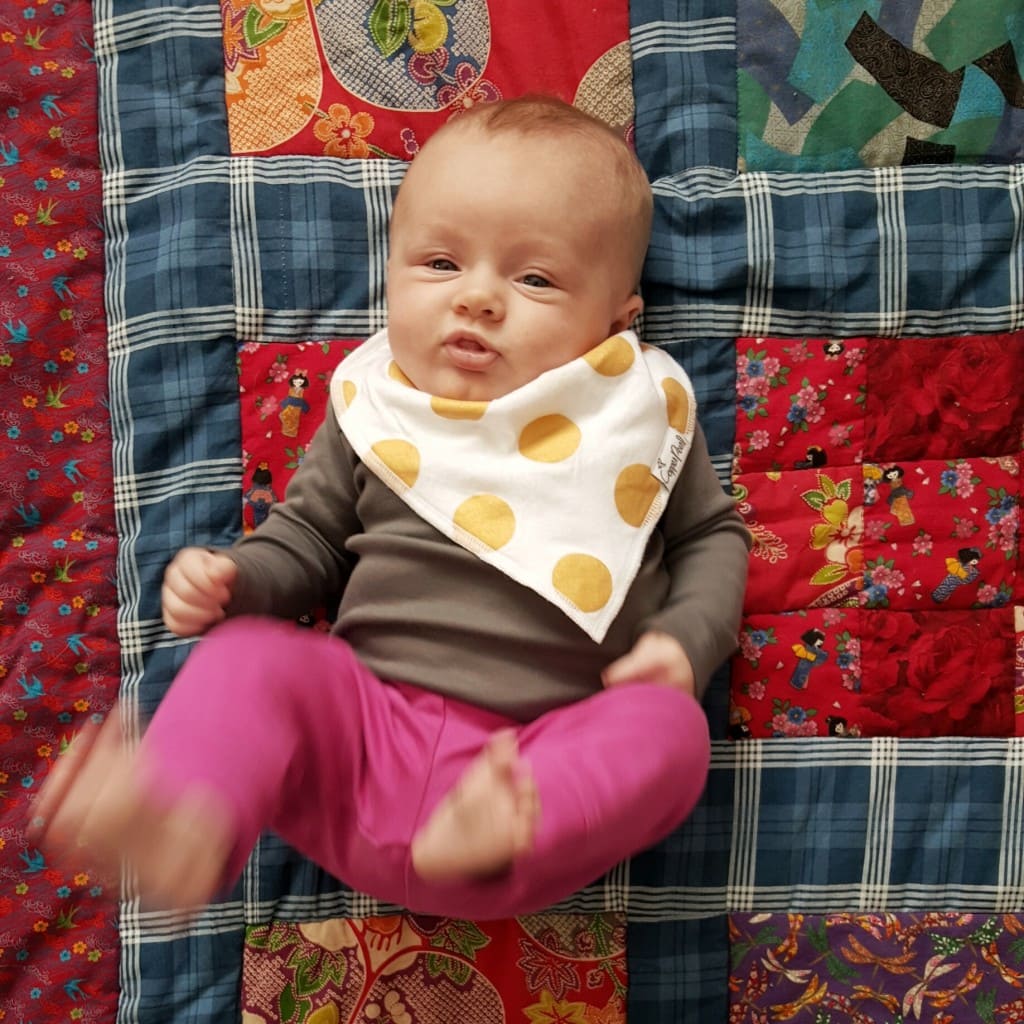 First, she's still eating like a champ, smiles so regularly, and is generally really sweet.  This month brought on drool, which I 'helped' by spending way too much money on adorable bibs.  This is good and bad: on the one hand they're cute, but they also cover up any cuteness on the front of outfits, so I have deemed this the time in Beck's life where casual basics with a coordinating drool bib is the name of her game.  It works, right?  Babies need to have their own style, even if it's designed only to deal with the fact that her mouth leaks all the time.  She's starting to figure out how to blow bubbles, which is kind of adorable, albeit gross.

Likes still involve ceiling fans, loud noises, music, and anything swaying or rattling above her.  You might have noticed her paper crane mobile in a few pictures, and I have a whole tutorial for that if you'd like to make one yourself.  WELL.  Making that mobile was seriously the best thing we did while I was pregnant hands down.  We have it hung over her changing table, and she adores it.  She could be screaming bloody murder, and as soon as she sees the cranes calms right down and just stares and smiles at them.  I read the mobile-over-changing-table trick as a way to get wiggly kids to stay still, but we sometimes just put her there to calm her down when she's super fussy.  We're contemplating making a second one for over the crib, starting an etsy shop, and are offering them to our 4,983 pregnant friends as baby gifts.  I'm not even joking, the thing is a miracle.

Milestones at 3 months are like....sometimes I think she might be looking at her hand and knowing its hers but mostly when she gnaws on her fingers it's by accident?  It's hard to tell.  She is wayyyy better at holding her head up unless she's really sleepy, and in those moments we achieve Total Muscle Failure but it's super cute.  Oohs and aahs are more frequent, and this girl is super active when she gets excited - lots of kicking and smiling and thrashing about.  The startle reflex that babies have is all but gone, and she's continuing to chunk up like the big lug that she is.  The clothes in these pictures are all 3-6mo size and my mom tells me I really need to get over the whining every time she outgrows something because it's really quite time consuming.  She's right, as usual.

The dogs are still mostly disinterested in the baby, but they do sniff her every time she comes back in the house just to be sure she didn't get to do anything fun that they didn't do.  Jake lies near her all the time but I think that's just because she has the better blankets.  This month was mostly a big month for new gear - we upgraded from the Moby wrap to Ergo, busted out the Good, Big stoller that Jay's dad and stepmom got us for our shower (Baby Jogger City Mini, can't say enough good things), and Beck got lots of new clothes from Primary and Le Petit Bateau.  She also got some sunglasses and hats, because ain't nobody got time for wrinkles at this age, right?

Speaking of all this, I should probably write a long obnoxious non-sponsored post about baby products we love.  I LOVE BABY PRODUCTS.  Would that be interesting to you? 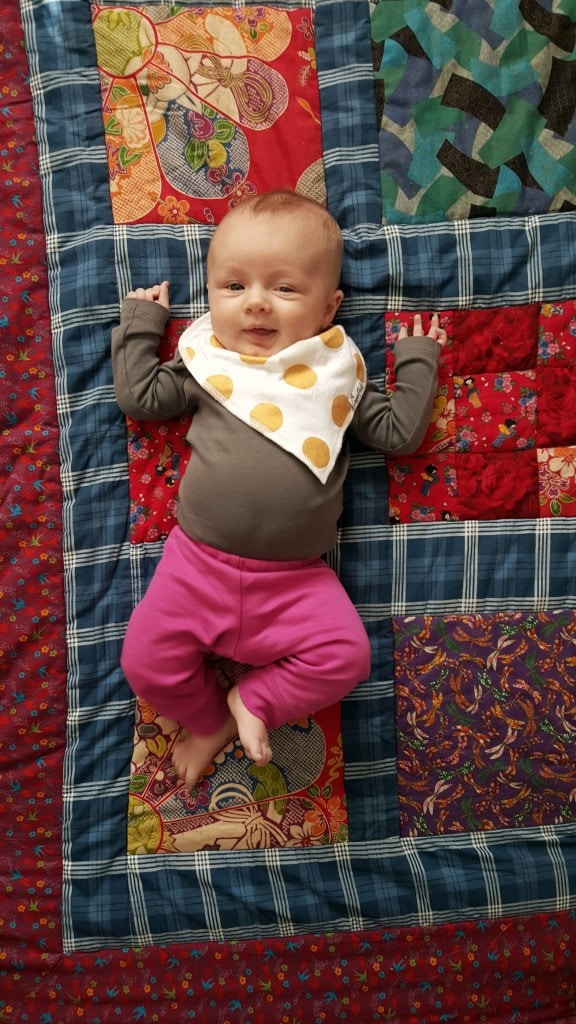 In really big news, Beck peed all over me and the floor the other day, so that was a fun first.  The last time she peed on me she was about 20 seconds old, no joke, had never worn a diaper.  This time, you'd think I know better, you really would.  And I do!  We bathe her in the sink in the kitchen (4moms tub, love it), but usually it happens after a big poop.  So we change her diaper in her room, put a new diaper on, walk her to the kitchen, bath, then that same new diaper goes back on if she doesn't pee in the 10 seconds it takes to get her in the bath.  WELL.  This particular time I was actually going to take her for a walk and then come back and give her a bath before a party we were going to.  But she smelled bad, so I was all "quick change and then we're off!" but of course it was the worst blowout I've seen in 3 months.  Poop was coming up the front, back, and had somehow gotten between the diaper and the tape, and we use regular diapers in an appropriate size, so what the HELL.  I sort of froze and was all "Jaaaayyyyyyyyy, maybe, um, eh, could you just come here?"  So we nixed the walk plan and just kept her naked, wiped her off, and I walked her out to the kitchen in just her towel, SCREAMING of course.  And the water was too hot and Jay was trying to cool it down and fill the tub and then through my brand new Uggs I felt something wet.  And then I heard drips!  And then I just laughed.  The girl had gone "full racehorse" as my friend Matt said, and somehow with allll that poop in that full diaper had been holding in a lot of pee.  So it got on her, it got on her towel, my pants, boots, the floor....I mean, seriously.

What I'm trying to say, is, she loves baths!  She can't sit up or interact with toys yet, but I have high hopes.  I'm going to start calling her Bechael Phelps.

It's really interesting when you start looking at babies and deciding who they look like, but what's WAY more interesting, to me at least, is other people's opinions!  I think, mostly, that people who know me say she looks like me, and people who know Jay says she looks like Jay.  Now, let me be the first to say that she kind of looks like a baby, and also we are the most boring Caucasian people ever and could easily pass for siblings.  So it isn't out of the realm of possibility that she looks like both of us.  Also, we don't care who she looks like.  But she totally looks like me, DON'T YOU THINK?  This picture makes me laugh, for years people have made fun of me for having eyes that disappear when I smile, so, sorry kid!  You got the shit end of that stick.  She has my nose and chin but I think Jay's mouth and his hairline, so far. 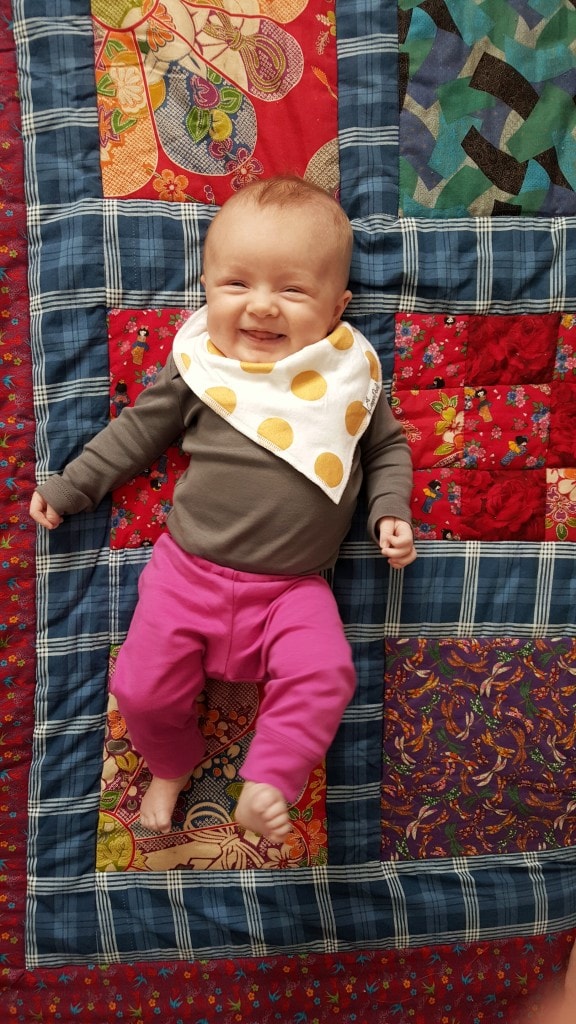 We're definitely still figuring out the work/life/marriage balance, and this month we've left her a few times with people for fun, non-work-related stuff.  I don't love leaving her ever, but somehow in my mind I can justify it more when it's for work?  That probably makes no sense.  My sister has watched her a few times while I do yoga, and Jay's dad and stepmom watched her last weekend while he went on a long bike ride and then we car shopped, which felt massively grown-up.  Grownup.  Grown up.  Does anyone know the rules on that one?

Sleep is still....coming.  It's actually fine, honestly.  Naps are a bigger issue than nights, to me.  12 weeks is really the earliest sleep training is recommended, so until now we've just encouraged good habits - same swaddle every night once we figured out one that worked for her, same-ish bedtime once she kind of indicated a few nights in a row when she could reliably go to sleep, that kind of thing.  She goes to bed around 10, sleeps for 4-6 hours, nurses fast, and that's really great.  THEN she either sleeps another 3 hours until the morning or wakes up one extra time to nurse.  That third time that happens sometimes around 5 is totally not hunger-related, so I'd love any advice you have on gently training her out of that - trying to calm her down, stuff like that?  I'm not interested in any cry-it-out methods just yet because I don't think it's necessary for us.  She nurses SO fast in the middle of the night and if she didn't I'd wake up to pump anyway, so I think I'll wait another month or so before I start pushing the through-the-night option.  That early AM thang, though, how do we get rid of that? 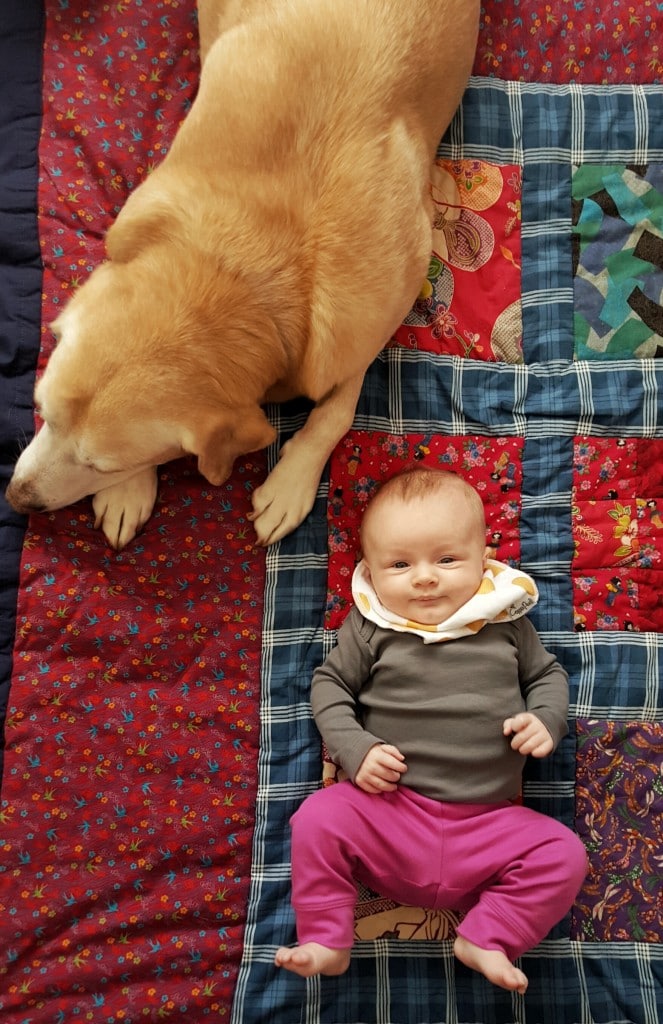 Naps, though.  OMG THE NAPS.  She took a 3-day break this week from anything longer than 20 minutes ONLY in someone's arms, and we almost died.  It's just so exhausting, this really quick cycle of wake, happy, cry, nurse, sleep, repeat, like 10 minutes for each item.  I think it's a growth spurt and thank the lordy that it didn't affect her night sleep, but STILL.  Jay and I both generally work while we're watching her, for better or for worse, and the decision between work and house stuff and baby-caring and screaming is just really tough to navigate.  Yesterday afternoon she finally went down around 3:30 and slept for over an hour, so let's hope that we get back to some kind of regular napping.  Even as her night sleep has gotten really scheduled and reliable, Beck has never been a great napper.  We had a good run of a long morning nap, maybe an hour or two around 9am, but it never quite took hold and afternoons have pretty much always been a cluster.  I've tried to keep naps bright and noisy and nights quiet and dark so she makes THAT distinction, and she has no trouble falling asleep during the day, it's the staying asleep that she can't master, and she wakes up so sad and just weary, which is a super sad emotion for a small person.

And so we go look at the cranes and nurse more than we need to and it all goes away!  Until 30 minutes later. 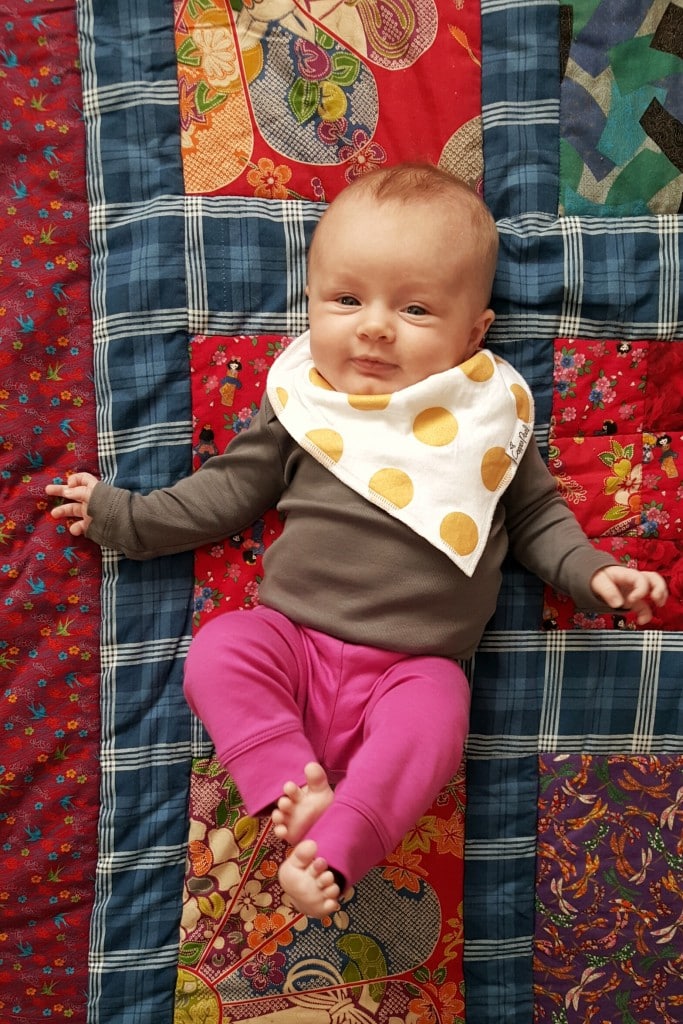 Babies knowing who you are and smiling at you with actual recognition is one of the most magical things in the entire world, I've discovered.  There are these little sleeping hiccups and juggling/life balance stuff, but in general we are having THE best time figuring out how to keep a person alive and ourselves sane at the same time.  I think the way Beck has fit pretty seamlessly into our lives is the best indicator of how things are going - everything has had to shift for sure, but we've tried to make it little shifts at a time to ensure that she AND we are getting what we need out of this ridiculous life, to the best of our ability.  We love her, of course, but we LIKE her, too, and I think that makes a lot of difference for how we approach things.

Except sleep.  We've pretty much given up on getting the sleep we need.