A year and a half. 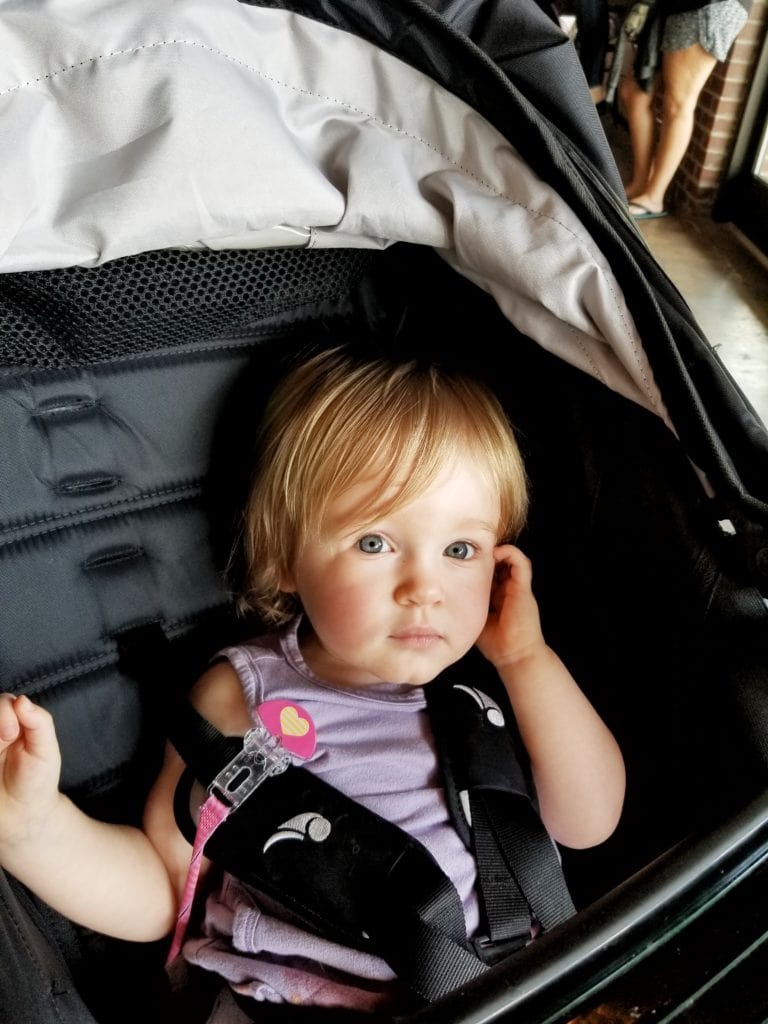 I can't believe it.  It flew by and I feel like I've known her my whole life all at once.  Most importantly, what did we DO WITH OUR TIME before we had Beck?  Honestly.  Also, in true I-have-a-little-kid fashion, this was supposed to be posted early this morning BUT Beck decided to empty the entire contents of her stomach in her high chair right as we were rushing around to get dressed and off to work.  Of course.

Beck is in some kind of massive spurt of EVERYTHING.  Growth, words, skills, tantrums, good/bad/ugly.  It happens so fast and cycles so quickly, most of the time it's hard to keep up.  She is 80% of the time perfectly delightful, smiley, curious, and loving.  The other 20% of the time makes us wonder WILL IT EVER END.  I hear that this is normal.  The new season of warmer weather and new activities has us reminiscing so much about last summer when the best we could hope for was naps in public so we could enjoy ourselves.  This year it's the opposite; we nap around fun activities.  Checking out the garden is a favorite activity, although I'm not certain Beck knows what a garden is.  She can, however, say the word (ish) and it's one of her favorite things to do with Jay.  We're growing a ton of tomatoes, one of her favorite foods, and I can't wait for her to eat one straight from the plant.

Besides tomatoes and a few other things, we're definitely getting into the picky toddler eating stage.  We still give Beck pretty plain food like peas and corn, then bread or pasta with shredded chicken.  She eats a medium variety of foods, but is positively volatile if we give her the wrong food at the wrong moment.  One frustration we all have with language development is that she can't always conjure words - we have to list tons of things that she MIGHT want, but if the answer to all of them is "no" and we get stuck then WORST PARENTS EVER.  There are some days where Beck only eats bread and pasta and milk and some days where she eats tons of vegetables and lean protein.  I try to remind myself that she won't starve, drinks enough milk to supply her with necessary nutrients, and will be old enough soon that I can force her to eat green stuff or have no dessert while screaming that she hates me, and that's something I'm really looking forward to.

We're vaguely starting to think about and or execute some discipline, which is hard and confusing and funny and a failure all at once.  Beck isn't really able to understand why she shouldn't do things yet, but she DOES know that she gets a reaction when she does something bad.  Mostly her bad things are hitting (only me, what a bond we share) and throwing food when she doesn't want anymore.  We try to ignore her and remove her from the situation as much as we can, which makes her SO mad.  Of course it's so validating to have someone come rushing to your aid when you get upset, and watching her fully melt down on the floor because I won't hold her while she hits me is kind of hilarious.

Restaurants and errands are becoming really hit-or-miss in terms of behavior; Beck has zero self-management skills in the boredom department.  We've noticed, too, that if we start to talk really fast around her she gets PISSED at being left out.  I kind of get it, not understanding a conversation is boring and frustrating, and of course it's frustrating for us to never be able to finish a sentence.  A saving grace of some stores is CARTS, Beck's preferred way to travel.  Stores without carts are a special kind of hell because it's hard to shop with one arm, most stores aren't big enough for strollers, and Beck looooooooves walking around and pulling things off shelves while I try to navigate picking things out.  So, she basically comes with me a lot to the grocery store and everywhere else I try to manage when she's being cared for by someone else.  I fully understand why people used to slash still want to leave their kids in the car while they run errands.  I don't do it, obviously, but I'm just saying.

Physical stuff!  Beck finally graced us with walking about 16.5 months, and the learning curve on that has been super quick.  One day she couldn't walk, one week she was wobbly, now she prances around like the owns the place.  She still walks kind of with her arms out to the side for balance (the rug-to-hardwood transition is tough, man), and we think it's the cutest thing in the entire world.  She doesn't exactly run yet, but she has a quickened pace that has the cutest little sound of her teensy feet on the floor.  We've dabbled in some playgrounds and swinging and sliding are the favorite activities, but she's getting a little bit better at climbing and figuring out other ways to have fun at parks.  She loves just sitting and messing around in the grass, too, now that it's nice and green and one million degrees here.

Beck has 6 teeth, more hair than about 90% of the babies her age that we know, and hates ponytails with a fiery passion.  I don't want to cut her hair but she looks fully ridiculous when some of it is pulled off of her face.  Jay sometimes asks Beck what she'd like to wear in the morning, and the answer is ALWAYS dress.  He puts on a dress and sandals and she prances over to the mirror to check herself out.  It's hilarious and we try to not make such a big deal out of how she looks, seeing as that has zero bearing on her worth in the world.  But still.  She is totally a big deal.

This girl has a sense of HUMOR, and it correlates directly with her sometimes-bad attitudes.  I've been thinking a lot about how we squash certain traits in children that we love in adults, and it's just so tricky to teach her how to use that fierce independence and intelligence for good but to not be a jerk in the process.   If Beck wants to giggle she'll come up to us and pinch us or something silly, then laugh, and wait for us to reciprocate.  It makes me laugh so hard because her little pinches are so teeny feeling, and her face is just gleeful when I tickle her back.  She's also started saying "noooooo" when we as her if she loves her mom and dad, but with this smirk that shows so clearly that she knows she's messing with us.  Watching her little personality develop is just the most rewarding thing, seeing how she interprets things that she's seen us do with each other is magical.

We're still super lucky on the sleep front, with 12 hours at night and 2 naps during the day that last about an hour.  We do make an effort to keep her somewhat on schedule, especially at night, and it keeps all three of us on track if Beck is sleeping when she should be.  The last few months have seen her with more later bedtimes (anything after 7:30 is late), and she does ok with it but ends up fussy and needing longer naps the next day.  Sometimes there isn't anything we can do about bedtime, but if there's something we really want to do late at night we use family or babysitters to sit at home while she slumbers.  One of our tricks has always been to put her down awake, which sounds crazy with a teeny baby, but which works so well with an older baby.  There's no rocking to sleep and then trying to not disrupt her when we put her down, we just give her a hug and kiss, sing a little song, and set her in bed.  From there she gathers up her babies and friends and arranges things how she needs to go to sleep.  We also leave her in bed for a little bit after she wakes up, especially if she gets up early in the morning.  We find that if we go in at the first peep and she isn't all the way awake we sometimes startle her, and giving her an extra 10 minutes or so to wake up slowly without us shrieking at her LOOK HOW GORGEOUS IT IS OUTSIDE is helpful in avoiding meltdowns.

Putting Beck to bed is by far my favorite thing, because she is such a participant in the process.  She gets her paci and favorite baby, and as soon as one of us picks her up she just drapes herself so easily over our shoulder, something that she only ever does anymore when she's ready for bed.  She stays there while we sway for a minute or two, then pops her head up, we set her down, and it's done.  There are some nights when I HATE our routine because it's so short; I love the freedom of an easy sleeper but would sit there and cuddle her for an hour each night if she would let me.

Other current favorites include "helping" with the "yaundry," assisting with food photography (ha), walking very slowly in public places, and smelling the gardenias on our front porch.  She doesn't know how to really sniff, but she puts her nose up to flowers and it's the cutest ever.  She's becoming a little more rule-based too: we only really have firm NO moments for safety and breaking things, but if she sees a yellow line at the edge of a sidewalk she starts to shake her finger and say no No NO at anyone who will listen - I'm glad the message has been received about not stepping off the sidewalk, but some of  the looks we've gotten while having teachable moments are just priceless.

Potty training, eating with utensils, and giving up pacifiers seem like a distant idea, and something we haven't even begun to entertain yet.  But, with everything, I know it'll all be here sooner than I wish.

So there she is.  A year and a half old, giggly and wiggly and curious and snuggly all at the same time, needy but independent, and the cutest little bug we have the pleasure of raising.