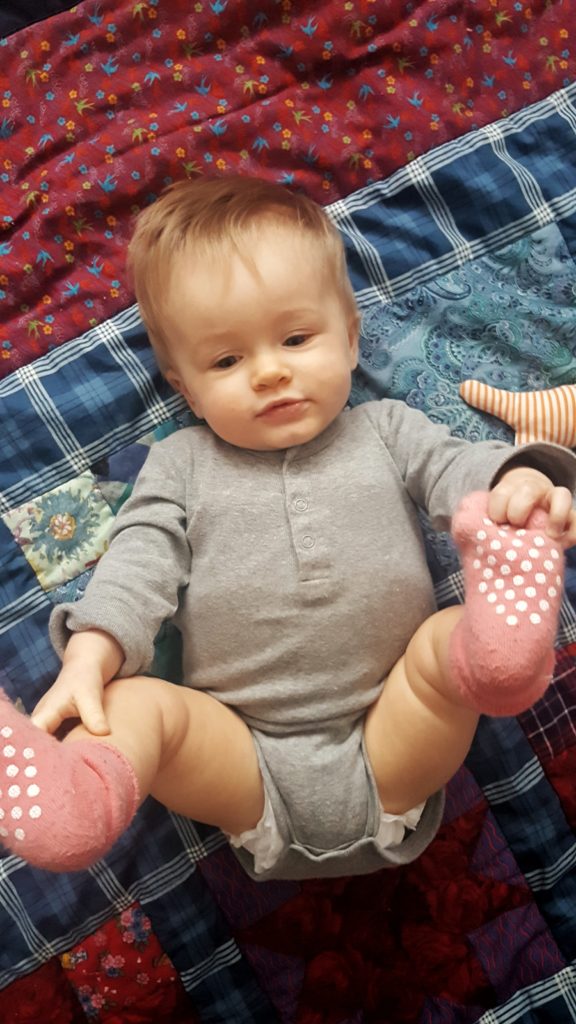 I refuse to write one year.  I mean, I have a one year old, but still.  She's 12 months, and I'll just keep with that system because it's what you do for a baby, and she's totally still a baby.
I think the turning 1 part of Beck has been more significant to me and Jay, and I have plans to write about that (this whole month will be basically about Christmas and Beck, so strap in), but let's talk about her first since she's the star. 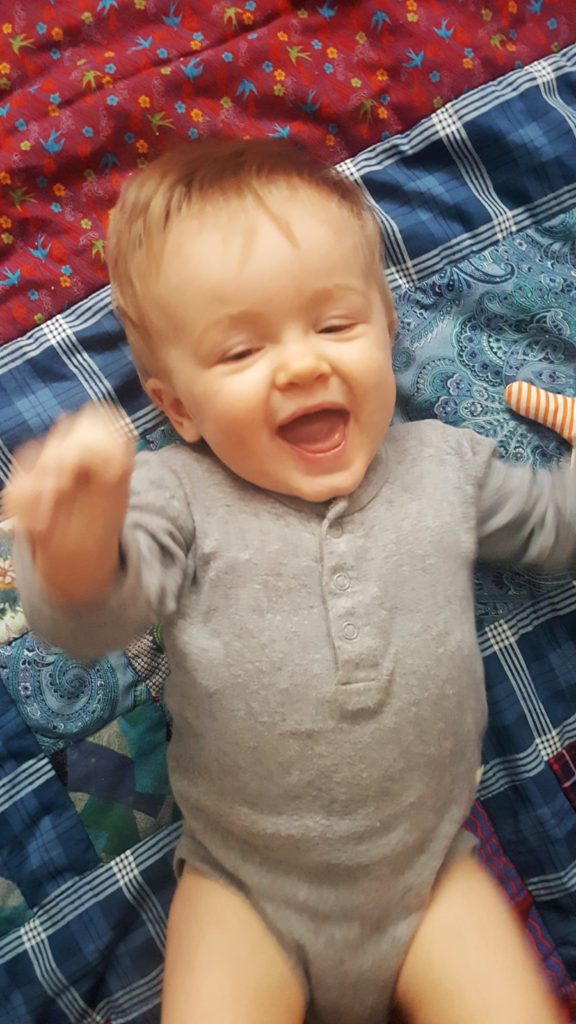 Mainly!  Chatting.  This girl says very few real words, and the "real" words I'm pretty sure only we can understand, but she babbles in a timbre that sounds just like real speech, which we find the most adorable.  She tries to "tell" us things, which is a constant source of frustration because she fully knows what she wants.  Points, yells, "says it," and we just aren't great at understanding the syllable "da" in varying forms, which is basically the start of every word.  We're working on it, though.
Play is still what we do most of the day, and Beck is starting to interact a lot more with toys, and if she sees something that is new (or first thing in the morning, new to the situation), she'll point at it with this little high pitched "oh!" like she's just so pleased to be seeing this cool new thing.  Balloons in grocery stores also produce this effect.  She is so BUSY all the time, probably evidenced by the fact that there are very few photos in this post that are in focus.  Sitting and staring at each other while smiling is so 4 months ago, which is so sad. 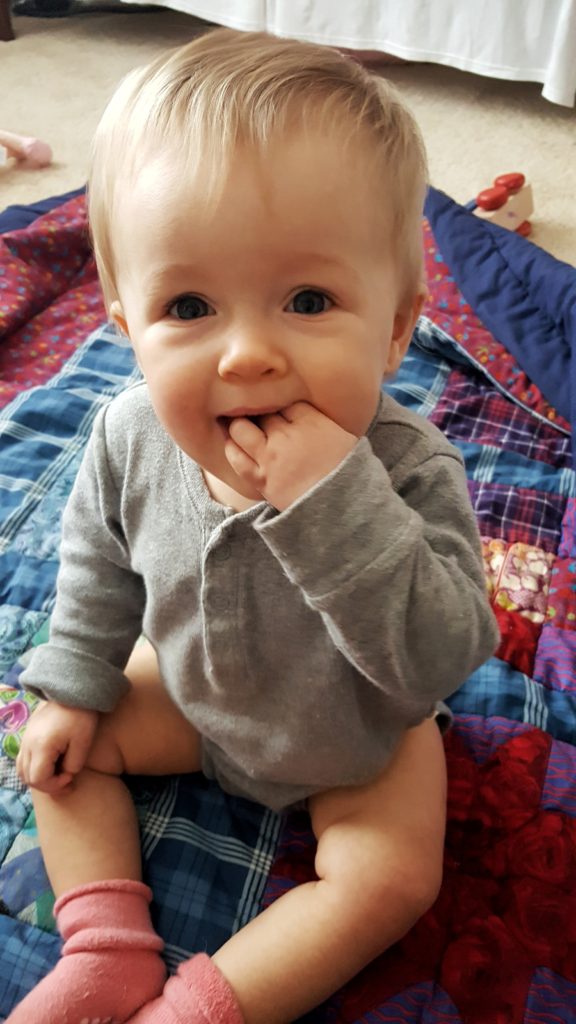 With playtime we've also noticed Beck communicating more with animals and dolls, and if we say "love the baby," she'll nuzzle dolls and fuzzy things with her forehead, which is hands down the kill-me-it's-over cutest thing I've ever seen in my whole life, tied for first with about 17 other things she does. 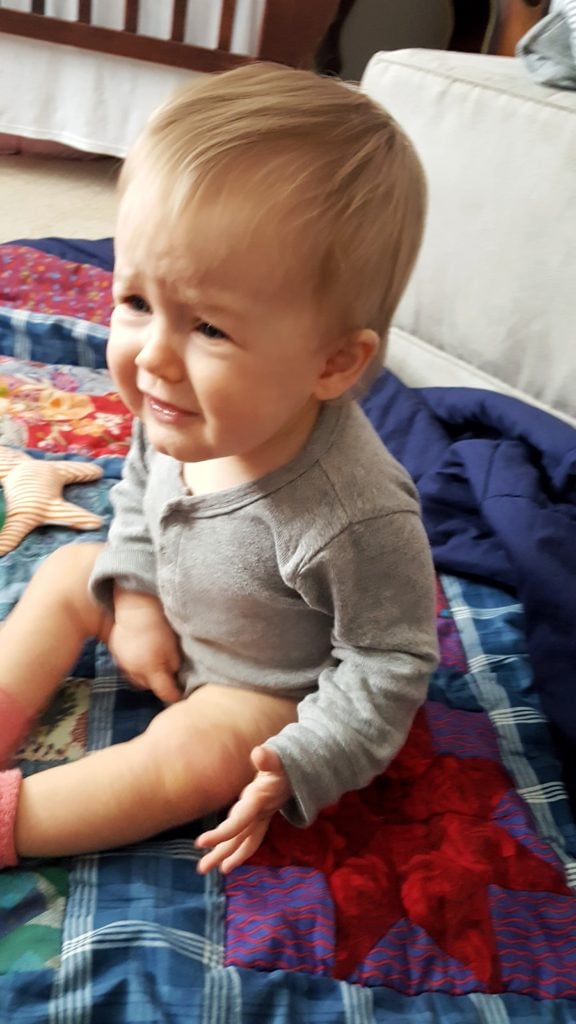 Emotions in general have been a lot more prominent, and tantrums are upon us.  We haven't had a ton of melting down so far, but if Beck doesn't get her way she arches her back and stiffens her entire body and HOWLS, which of course we want to crack up at but...maybe not the best idea.  She's also developed a new cry specifically for pain, mainly due to her headbutting things daily, including but not limited to my face. 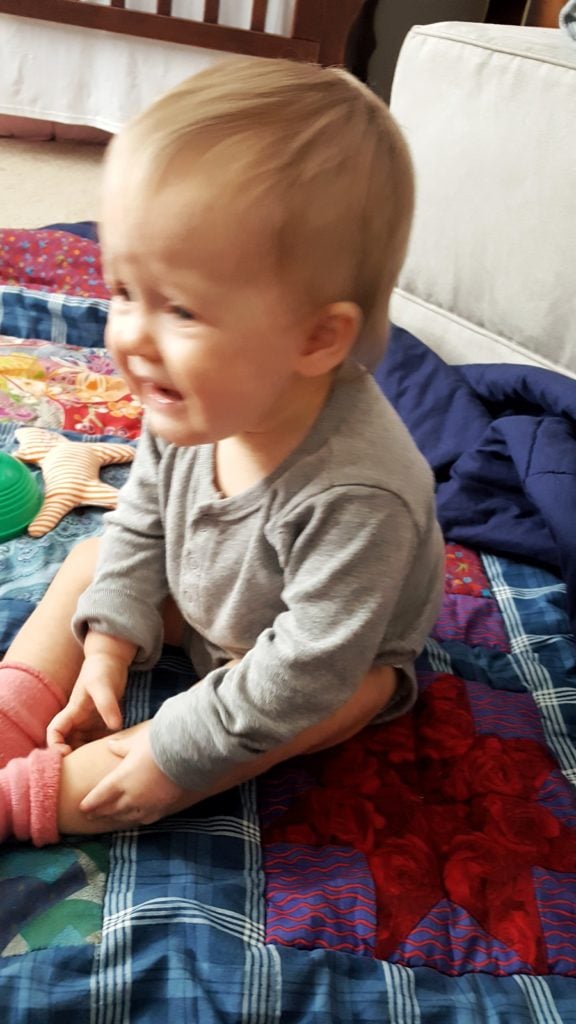 Excitement has also been a new favorite, and Beck has this whole-body excitement where if she sees something she likes she kicks her legs super fast like egg beaters and flaps her arms with her mouth gaping in this huge gummy grin, which is just the BEST.  Objects of the excited freak-out are her dad and her morning banana.  She's got lots of love to share, is my point. 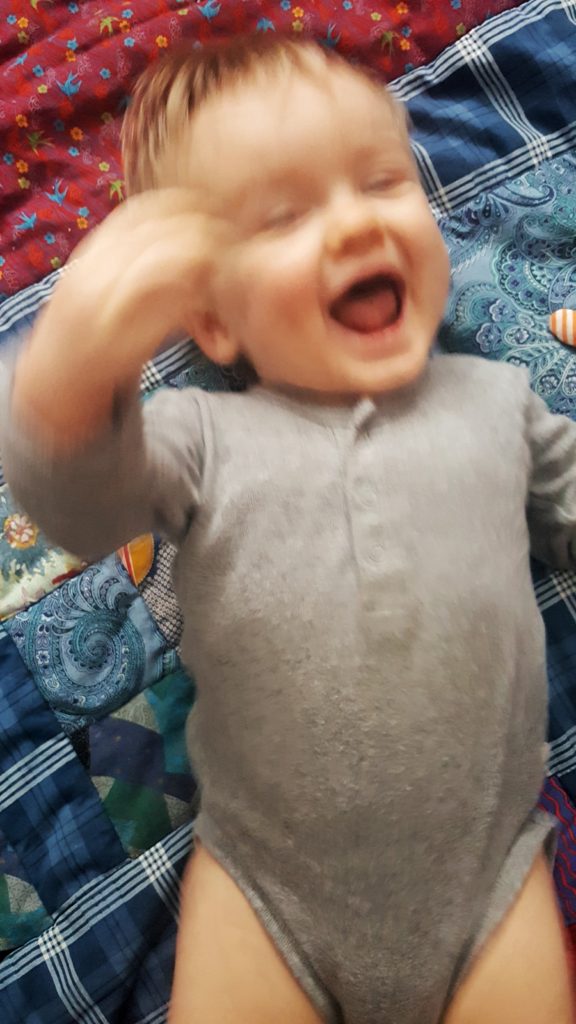 Physically, I'm thinking this girl is still pretty small on the spectrum of malnourished to Stop Giving Your Baby Potato Chips.  But, she looks bigger to me when other people hold her and her pants are sometimes too short, which tells me that maybe I'll always think she looks little?  We don't go to the ped for her 1 year appointment until she's over 13 months, so her stats will just be WRONG.  But, I'm thinking she's about 21 pounds based on the last time I threw her on a scale when she got a quick flu shot.
Small though she is, Beck is mighty.  Super strong, loves clapping and high fiving, and pulls up to her knees, where she gets stuck and can't figure out how to pull herself up to standing.  She's SO close, and we don't do a ton to encourage her one way or another, and it's so funny to see her scuttle to furniture, get to her knees, and then just freeze.  She knows something else needs to happen, but brain-to-bod is a slow shift sometimes. 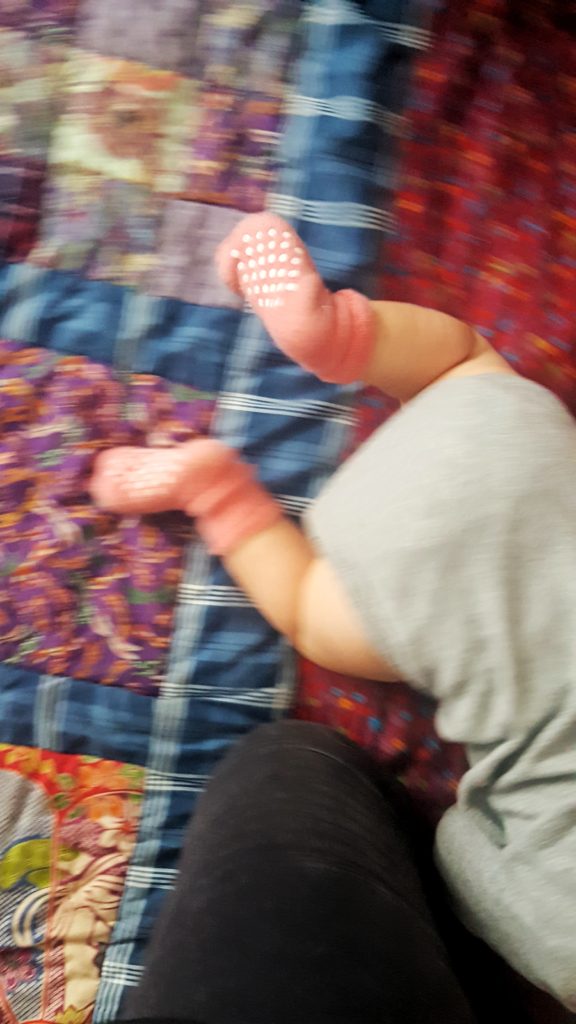 Eating is still our favorite thing to do, and watching Beck eat things that she really likes is the biggest trip.  She learned awhile ago to say "mmmm," when she likes things, but she gets the inflection messed up and is like MMMMMMM?? like she's confused but smiles while she does it.  It's so loud almost like she's upset, a really violent appreciation of food.  Sweet potatoes, bananas, chicken, and black beans are current favorites.  Disliked food gets swept dramatically off table or tray, and hot and spicy foods are offensive like nothing you've ever seen.  Water is Beck's favorite drink (and the only one she gets other then cow's milk, which was a new addition to her diet this week. 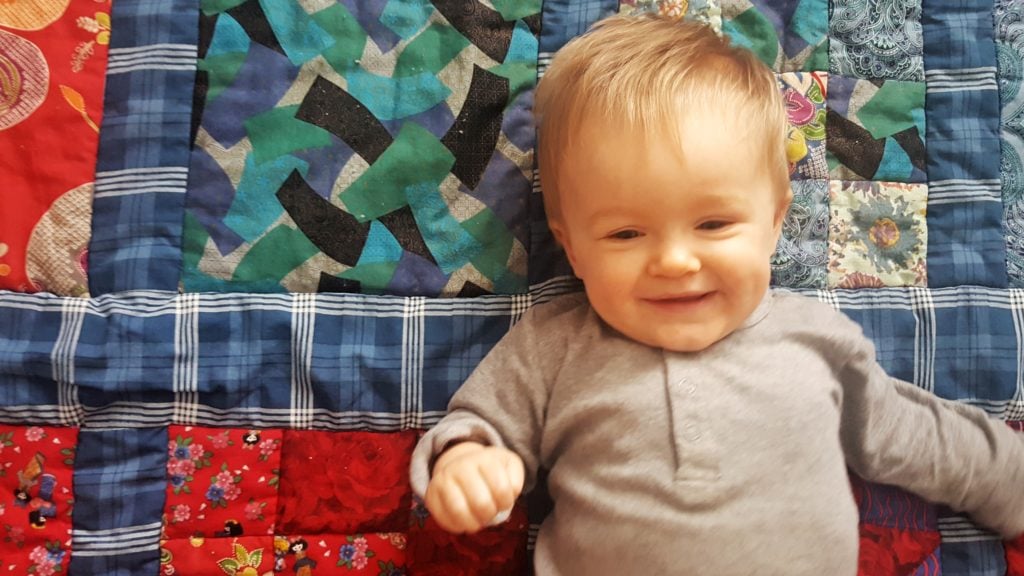 Speaking of milk!  Beck still nurses once or twice a day, but I recently switched birth control and am pretty sure she's just hanging on for my sake.  We get a great nurse in the morning and after that it's kind of whatever, which I'm ok with.  When I ditch the AM nurse I'll probably demand another baby and Jay will demand that I quit at least one more job, which I think would be fair.  When I stopped pumping at work we started giving her goat's milk once or twice per day, and now that she's one cow's milk for the sake of her gut and my wallet.  She does great with other dairy and has been fine with the regular milk so far, so we're sticking with it. 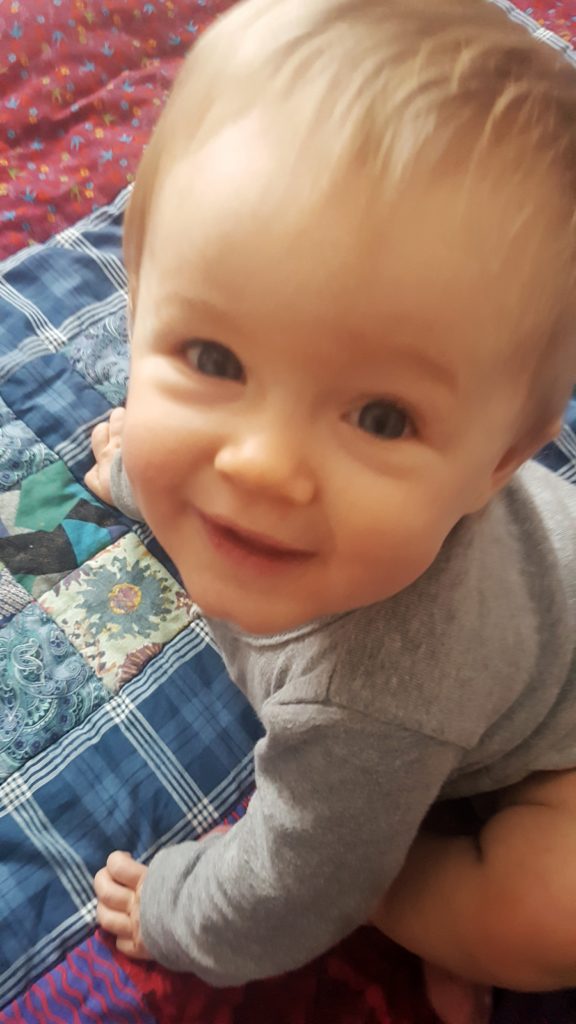 I think that if we needed a word for this last month of the first year (assuming we could only pick one, which is impossible  given the complexity of parenting a person), it would be love.  My feelings for and about Beck have become more simple recently, is the only way I can think to put it.  There have been developmental phases where I worry or wonder or am baffled, but right now she seems happy most of the time, upset at the right times (pain, being tired), and as normal as any child of mine could possibly be.  I only think about her dying 17 or so times per day, so I'm pretty productive and well-rested, and I feel like we're in this groove, short-lived as it may be, of just enjoying Beck and watching her grow. 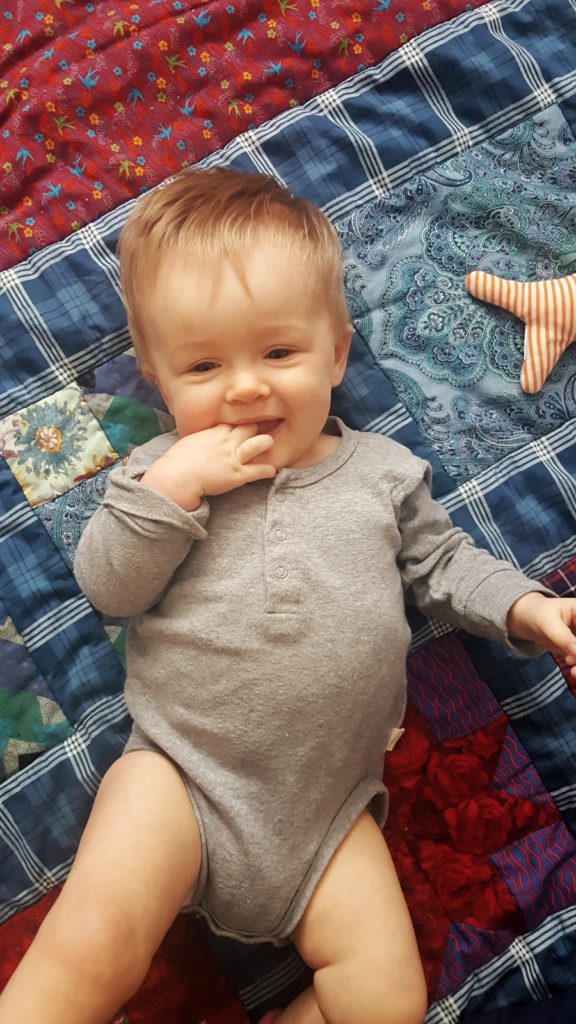 I'm going to write about parenting some more and baby favorites and revisit her birth story, so bear with me as I sob my way through the next few weeks.  You're the best.
« Five for Friday (in pictures!)
Easy Dry Glazed Ham »