WHAT.  This is basically a full-grown human.  I mean, I know the brain isn't fully developed until, what, 47 (jk), but still.  She's a real person, more and more every month, and it makes me so happy and sad at the same time. 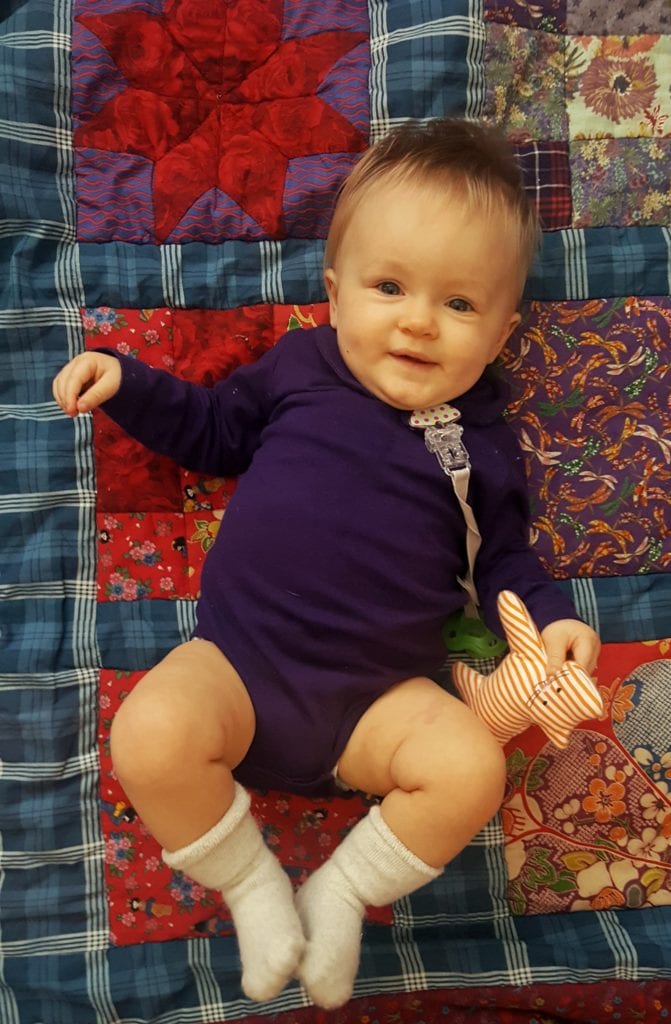 Updates!  She's big.  All of a sudden, much sturdier and more muscular.  She's still not terribly tall, but I can tell she's chunking up when I hold my friends' babies.  We have a lot of lanky boy babies in our life, and they look the same but are so much lighter and floppier than Beck.  This could also be because she eats adult-sized meals, but who knows.  Just a theory. 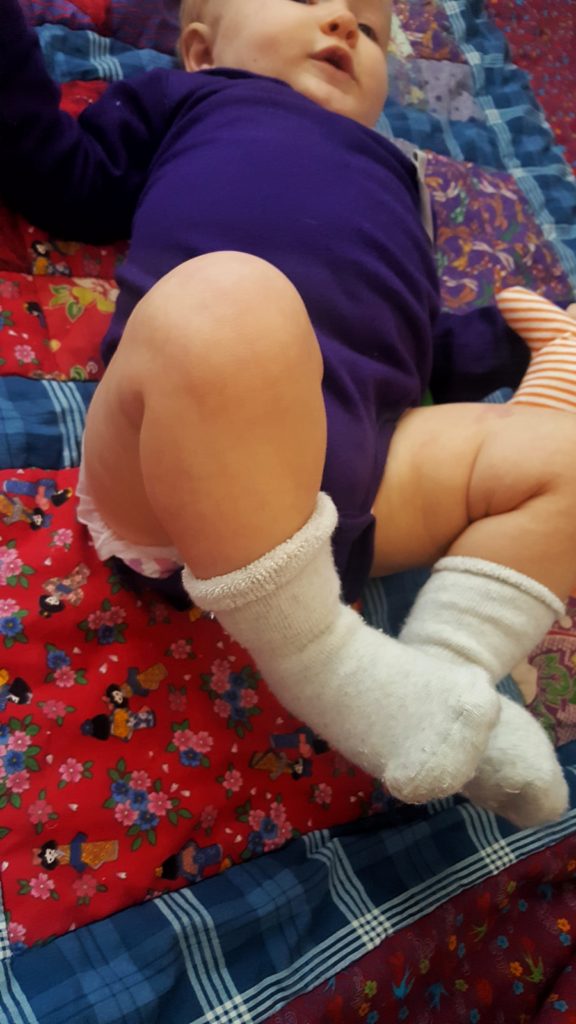 Every day we have more and more connection with her - she has known who we are for ages, of course, but there's more communication, more back and forth, different smiles when she sees me and Jay than when she sees anyone else, which is just the most heart melting feeling in the entire world.  We are also at the stage where no one in the world knows what Beck wants because she doesn't talk, but somehow we can figure it out based on her screeches and arm flaps.  She flaps her arms to get things....to get us to play certain games, to get more food, to get picked up, but we're pretty good at figuring out which flap means what. 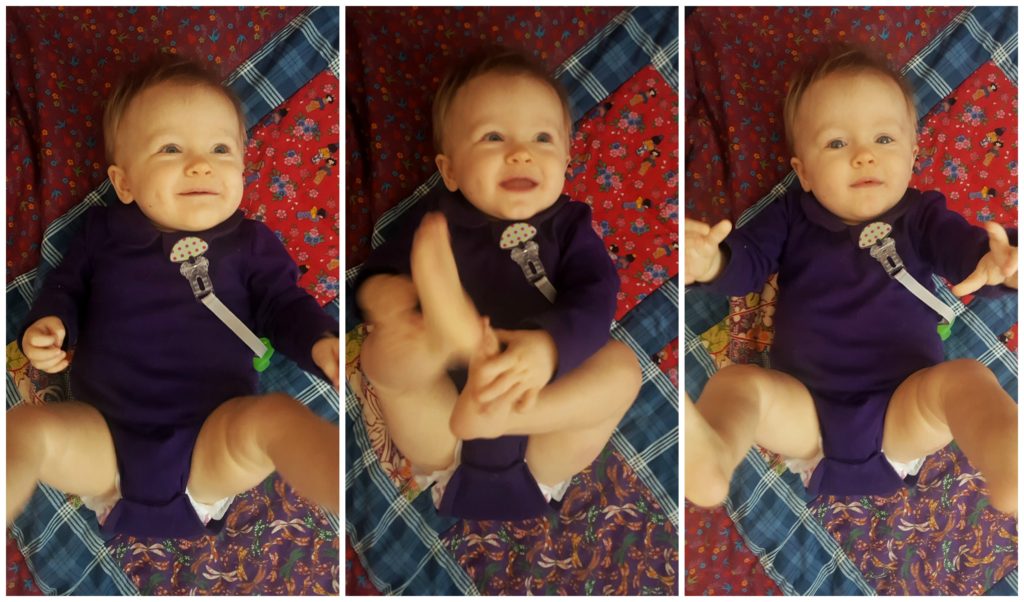 Beck isn't talking or walking yet, but she definitely knows a lot of words, and is so pleased when she figures out what we are saying.  Currently she can clap by hearing the word and not seeing the motion, and she's working on waving on command.  Her wave is the most adorable thing in the world, and usually directed at strangers NOT looking at her.  People in line to vote trying not to make eye contact with anyone?  Beck's waving like a fool until they are forced to smile and wave back and we are forced to be pleasant to strangers.  Nothing tickles her more than when someone waves back to her, and the look she gives me like "see, it worked!" is the best ever. 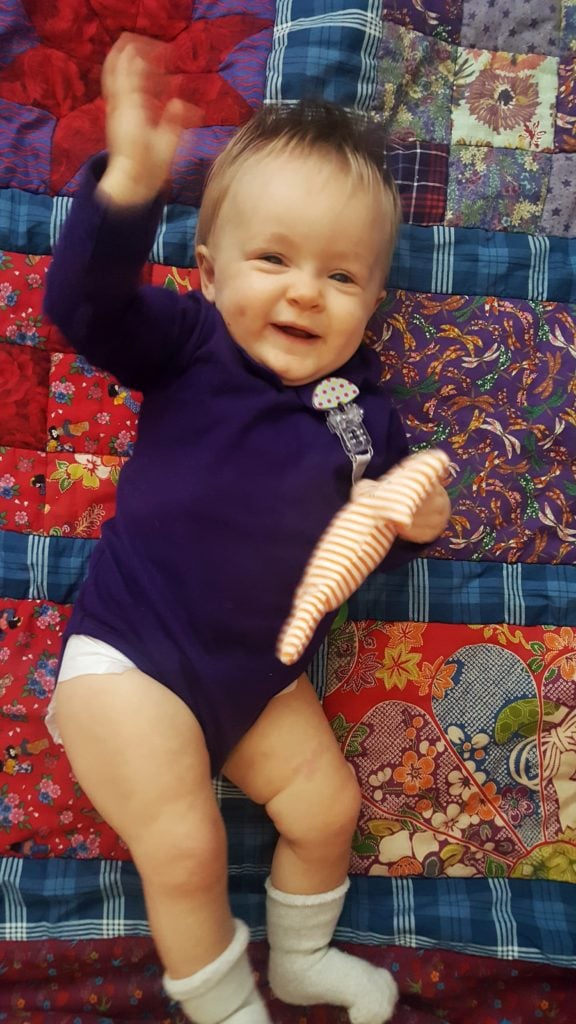 Because we know Beck is understanding us, we're still in talks to decide about what and how we talk to each other when Beck is around but not involved in the conversation, which is a lot because she has very few choices and is pretty boring at this point.  We don't want her to accidentally hear things she shouldn't, and I'm hoping that just kind of happens organically as she grows up.  Tell me how to manage this please.  All I do so far is try to avoid using only "cute" or "pretty" to describe her.  She is SO much more than that, so I make an effort to tell her so. 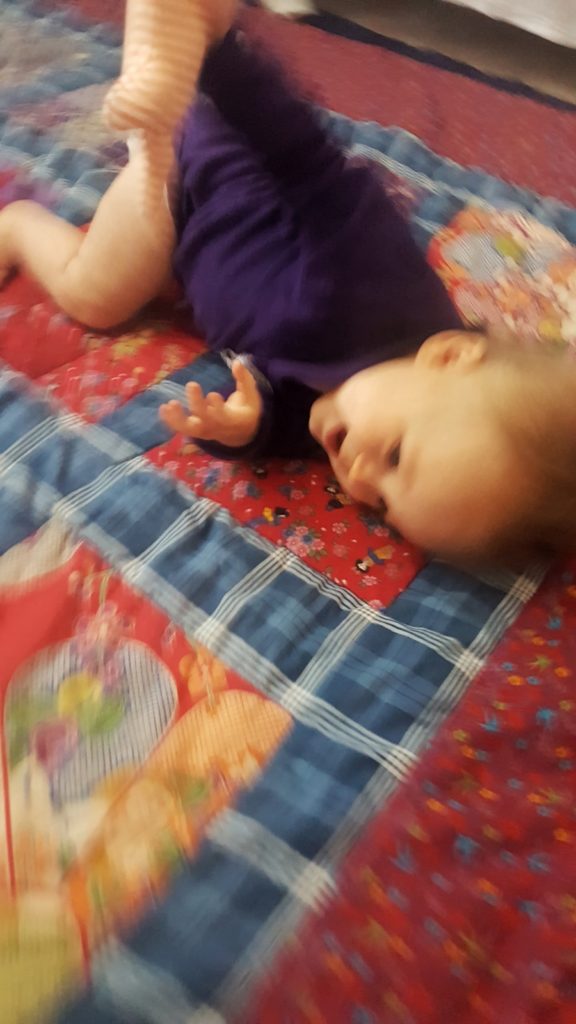 Physically, Beck still isn't terribly mobile.  She can get wherever she wants to go now, finally, but isn't terribly interested in moving around like other kids are.  This is kind of great for us because she's not terribly destructive yet, and she's usually content to sit and "talk" to her toys.  The little quiet babbles under her breath slay me.  I'm still not convinced I have enough "good" toys, whatever that means, but she's much more involved with them and for longer periods of time than she used to be.  She remembers her favorite toys day to day and scoots for them quickly as soon as we hit the floor. 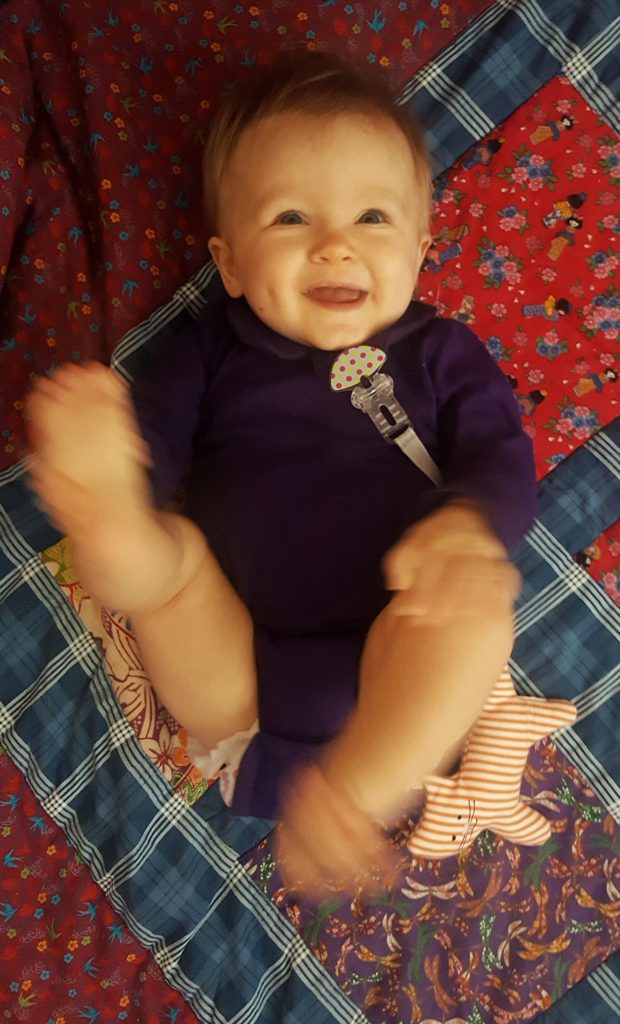 When toys aren't involved, play definitely still is.  Any kind of funny face, noise, peek-a-boo, it's all hilarious to her.  Certain words make her absolutely crack up, and there is 100% nothing better than a little baby laugh.  Nothing.  Sometimes Beck will catch me on my phone for too long (I know, I know, move on), and will stare at me and just laugh out loud to get my attention.  This prompts me to do some of the things that make her laugh, which cracks her up even more, and around and around we go.  It's so much fun that she's starting stuff, not just sitting there whining until I think of something entertaining for us to do.  It's definitely  a weird middle stage; she can't do a ton yet in terms of activities but gets bored on the floor with baby toys.  I can't wait until art and playgrounds are more of a thing, but she's not quite there yet.  Play Doh is the best. 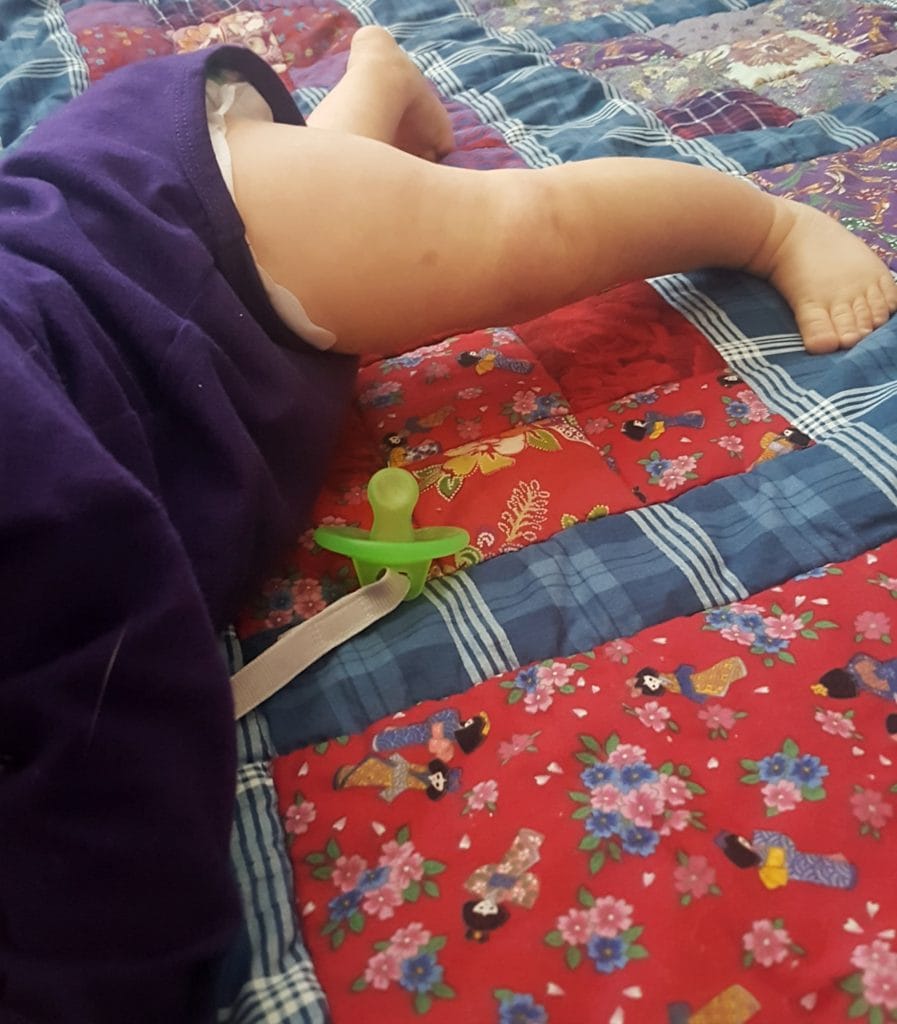 Eating is still her favorite activity, and she eats usually 4 meals a day plus nursing, which is waning on its own to a few times each day.  I'm still in this hiccup where I cut everything up super duper teeny for her, and I know I should give her larger things to gnaw on and practice her skills, but choking is one of my bigger parenting anxieties, so....I'm waiting for teeth.  Or a sign from God.  Or just am going to cut her food for her in perpetuity, because I have nothing better to do. 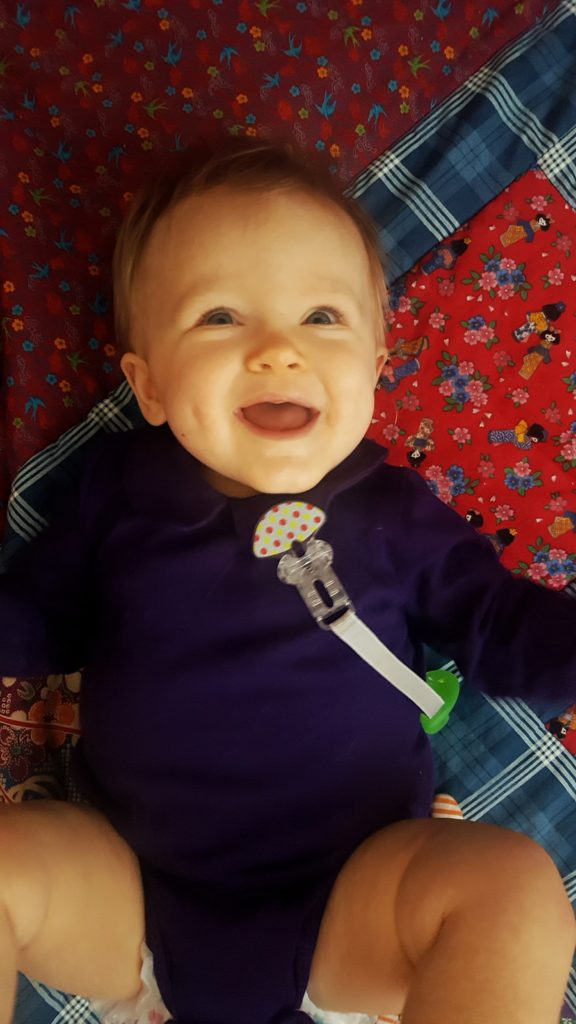 It's a joy, being a parent.  I'd say "this child's parent," but I think for most of us parenting is a joy, even in the mundane, even in the trenches of frustration and self-doubt.  This week has made me especially emotional about raising her, thinking about more kids, and what that will look like in the current climate of our nation - all questions that we won't have answers to for some time, of course.  I want her to know how bright I think she is, how much her smiles and gentleness improve the quality of life for those around her, how far she can go in this world no matter what other people tell her.  And then I look at her and just want to eat her thighs and save the heavy stuff for another day.

I think I like her, is what I'm trying to say.