We have a one-month old. 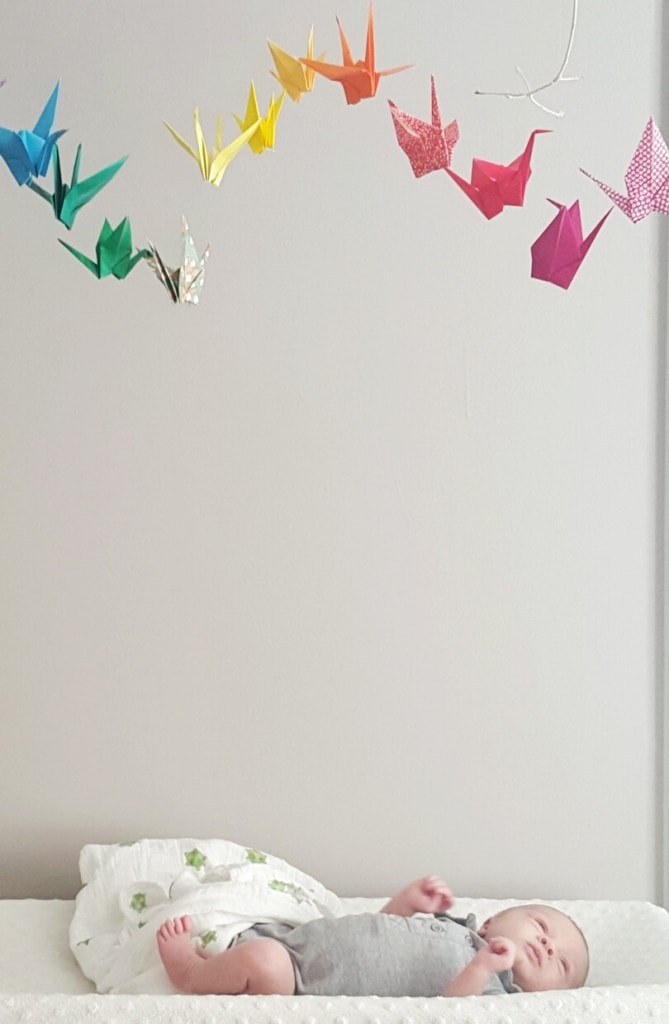 It sounds really young still, because it is, but also it's like you've been around for 1/12th of a calendar year and you've grown a lot, and eyelashes came in, and you had Christmas and New Years and learned how to nurse and all SORTS of stuff.  High fives.

I do think for us that getting through month one kind of feels like emerging from the initial baby fog.  The fog now is more steady sleep-deprivation, but the constant feelings of being baffled by this life we're in charge of have waned ever so slightly.  There's a routine to the lack of routine - we know what it looks like when she needs to eat, we know how to entertain her for the short periods that she's awake, we know when to try new things and when to let it go.

The trying new things mainly consists of sleep locations and pacifiers.  I sort of think that one could enhance the success of the other, but Beck is pretty unreasonable about pacifiers.  She wants to be attached to a boob about 80% of her waking time and REALLY likes to just hold my nipple in her mouth while she naps.  Like...the whole time.  This made it really hard for me to do anything EVER for the first few weeks, but I read over and over again that after 3-5 weeks some babies naturally get over it, and she has a TEENSY BIT.   We've had more and more success with her sleeping in this pod we have for longer naps during the day (multiple 2 hour naps, over the course of multiple days, so I consider it a significant shift), but even in her sleep she roots and makes sucking faces, which is SO cute but I really think if she'd just take a paci we'd have even more success with the longer stretches of sleep.  We've tried 4 different brands, and except for the odd 3 minute stretch of sucking have had no success at all getting her to take it, and usually it makes her cry even if she is perfectly happy before we stick it in her mouth.  She likes to suck but won't suck on the thing specifically designed for sucking.  Unreasonable. 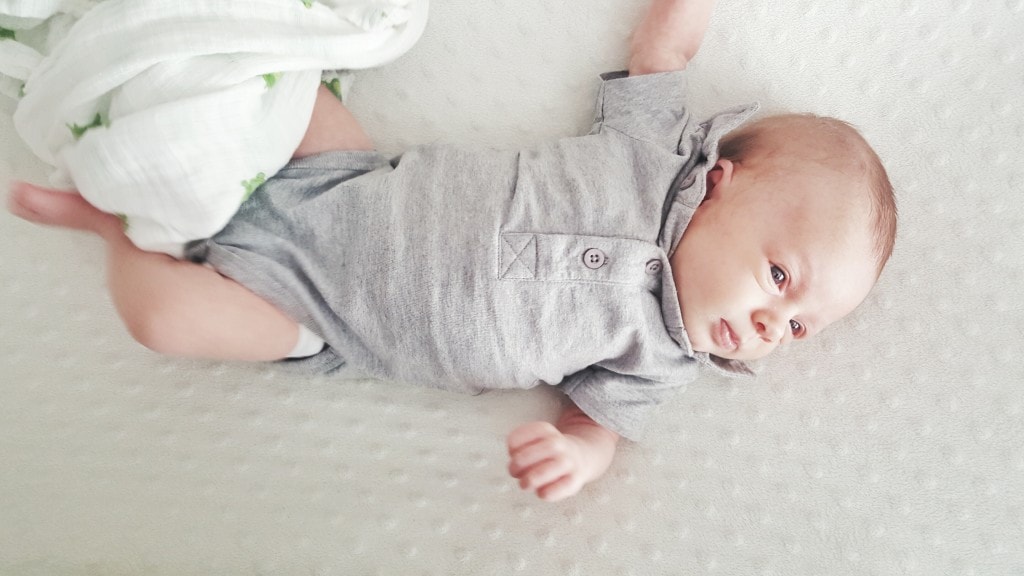 As for sleep location, the ONE place she'll sleep that isn't with us is in her Leachco Podster, and at night that only works for about 30 minutes at a time.  At night she ends up in bed with us, which isn't my favorite plan for the long-term but I think the longer stretches of sleep are well worth the suuuuuper light sleep that I get as opposed to no sleep when she wakes up literally 20-30 minutes after being put down anywhere else.  Again, I think this is something most babies grow out of naturally, and I put her down every night either in the rock n play, podster, or pack n play, so she's at least getting the message that there are other places to sleep.  Whether or not she eventually accepts that....well, we'll see. 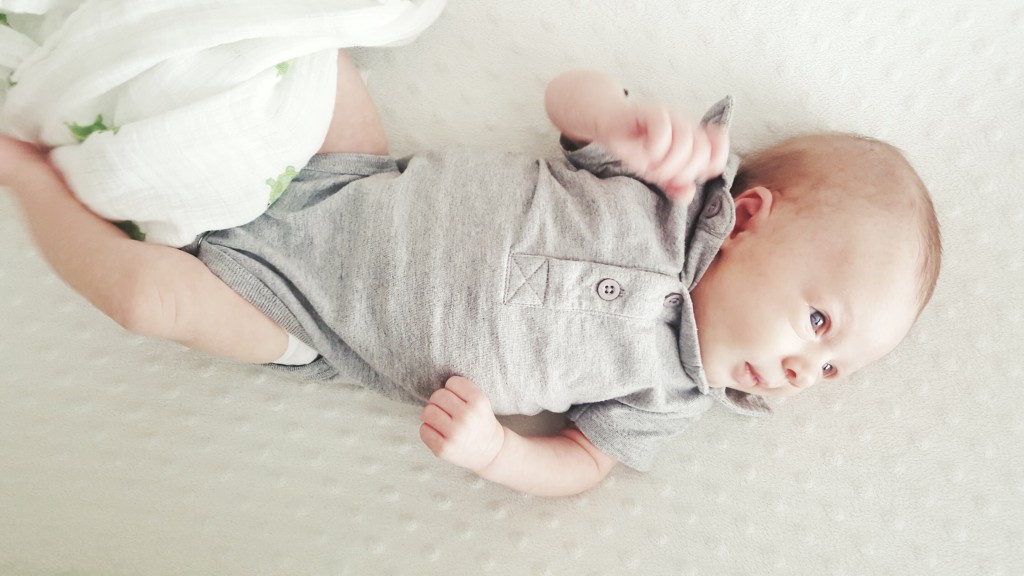 Besides sleeping and nursing, which is her #1 favorite thing on the planet, we've been getting more and more alert-but-not-screaming stretches as she's gotten older, which is just the greatest.  We try to work out what's she's thinking and learning, which is so exciting because in theory the answer is ALL OF THE THINGS.  Babies can't see very well at this point, so anything really contrasty like ceiling fans and people with dark glasses are of interest to her.  Yesterday we Facetimed with Jay (he's in LA this week for work) and she was mesmerized, just like the dogs are when I put him on speakerphone.  Like...they know that he sounds familiar but WHERE IS HE WHY CAN'T I SMELL HIM.  So, the moral of the story is that Beck is as smart as a dog!  Except she doesn't know where to poop yet. 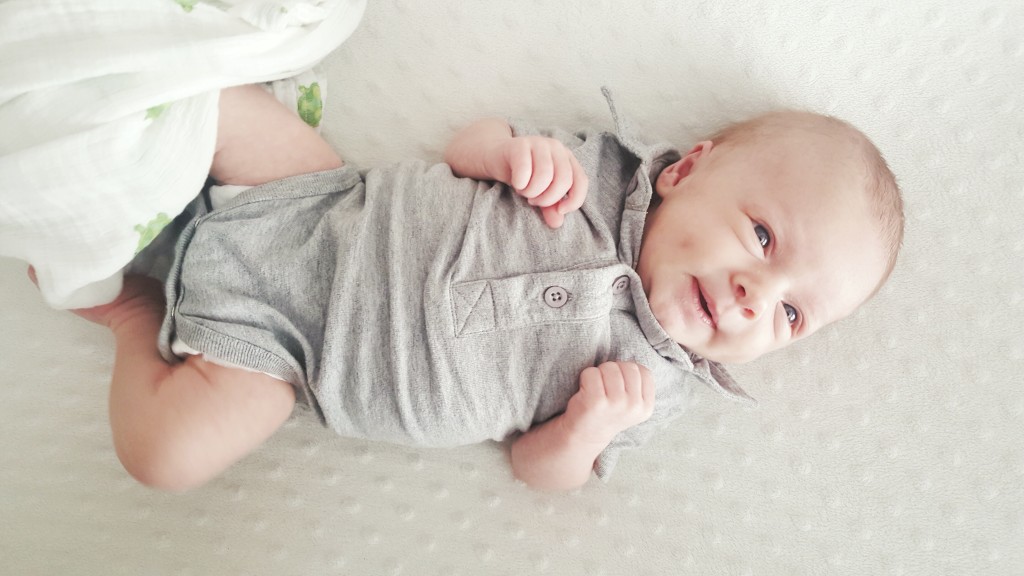 I'm going to write a whole post on nursing and boobs and leaking and all that weirdness, but the short of it is that my nipples are getting better but still hurt, and I breastfeed on-demand.  Beck nurses for food and comfort, which so far has meant that there have been exactly zero times that we haven't been able to quickly quiet her with a boob.  Now, that totally sucks for other people who watch her, but as she's gotten older she's gotten better little by little at being soothed by rocking and singing.  She does have a witching hour (HOURS, no matter what people say) each night from about 7-10, and during that time she's pretty much fussing or eating, which so far has made it tough for me to do anything.  I could of course leave her with someone and hope that she'll calm down eventually, which she may or may not do, but I haven't had a strong desire to do that to her or the poor soul willing to relieve me so far. 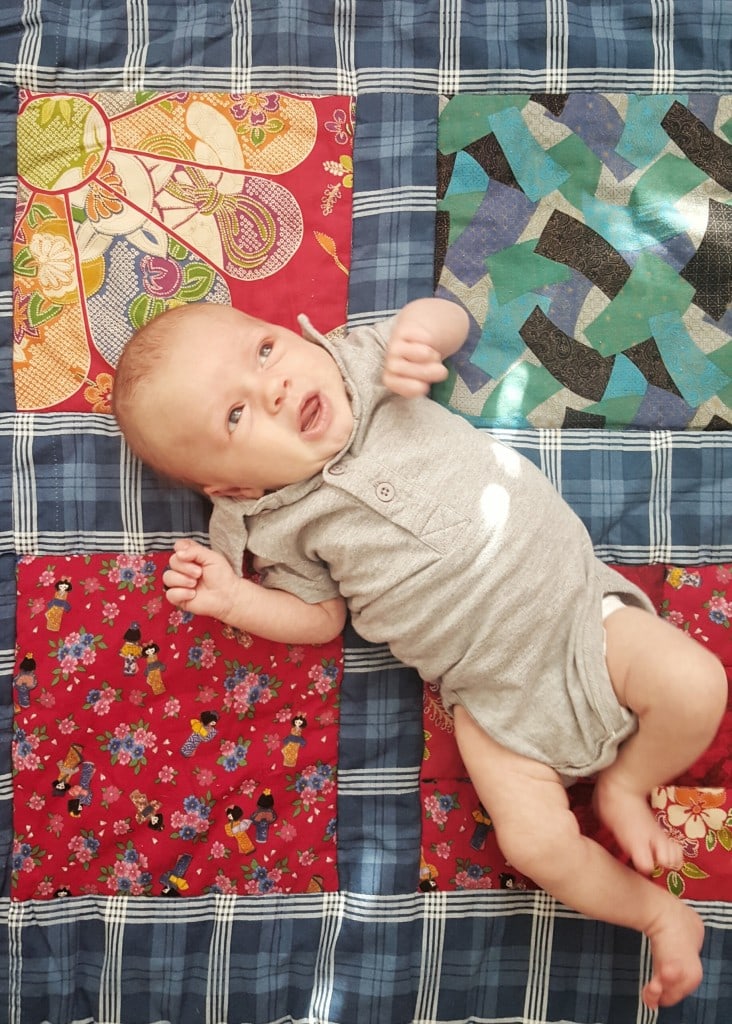 Jay is still holding strong as The World's Most Devoted Dad, and the scene at the airport Sunday morning was really pitiful.  Beck is growing FAST, and a lot will happen in a week, so I felt really bad for him having to leave so early in her life.  He went back to work a few weeks ago, but when he is home he does everything but feed her so that I can do things at home, rest, hang out with friends that come to visit, etc.  He changes diapers, picks out outfits, handles baths, everything.  In the morning before work we usually have it timed where Beck eats around 5, then Jay wakes up around 6 and takes her for SportsCenter and coffee so I can sleep alone for 90 minutes or so, which is great for them to have those morning snuggles and great for me to starfish in the middle of the bed and not worry about crushing my child for once in my damn life.  I have a feeling that when he gets home he's going to get one of the first real smiles, which makes me jealous and happy all at once. 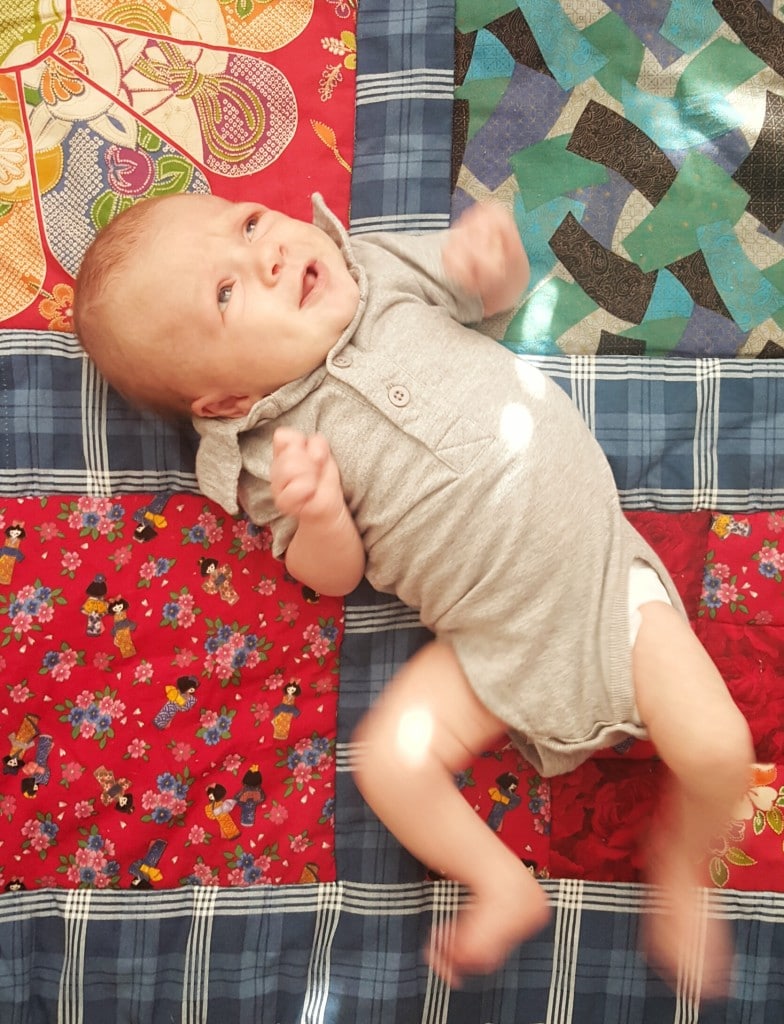 At Beck's 1-month appointment yesterday she had grown TWO POUNDS AND ONE OUNCE since birth, which is 30% of her birth weight!  It's a testament to how much she eats, and it makes me so happy that she's growing because of the work we're doing together.  Just in the past few days she's been dangerously close to outgrowing some of her teeniest clothes, which is devastating and exciting all at once.  The best part is, though, that her belly is what is too big for her clothes; they still fit her arms and legs just fine.  Massive baby belly FTW!  The other big event at the pediatrician was Beck's first shot (she got one in the birth center but was too sleepy to care), and HOLY HORMONES it is not fun to watch your kid be in pain.  I didn't cry or anything like that, and it's honestly a good thing that Jay wasn't there because he would have lost it, but watching her lie there totally fine and trusting and then the absolute agony on her face when the needle went in....no, no thanks.  Jenny McCarthy might have made up that whole autism thing (yes, it's made up, no, you do not get to have a different "opinion," it's science) just to not have to see her kid get shots.  I kind of get it.  But, see above re: comfort nursing, the crying lasted about 20 seconds and then I had Beck back on the boob and she lived to tell the tale.  Still, though.  Poor baby.  Me no like.  On that, though, I had a colleague who used to work with pediatric cancer patients tell me that if I could, I should nurse while the shot was being given.  I asked the nurse about it yesterday and she said she was fine with it but they didn't recommend it because it then associates pain with nursing for the child.  Do you know anything about that?  Better to nurse during or right after?  I really don't know.  Let's learn about that together. 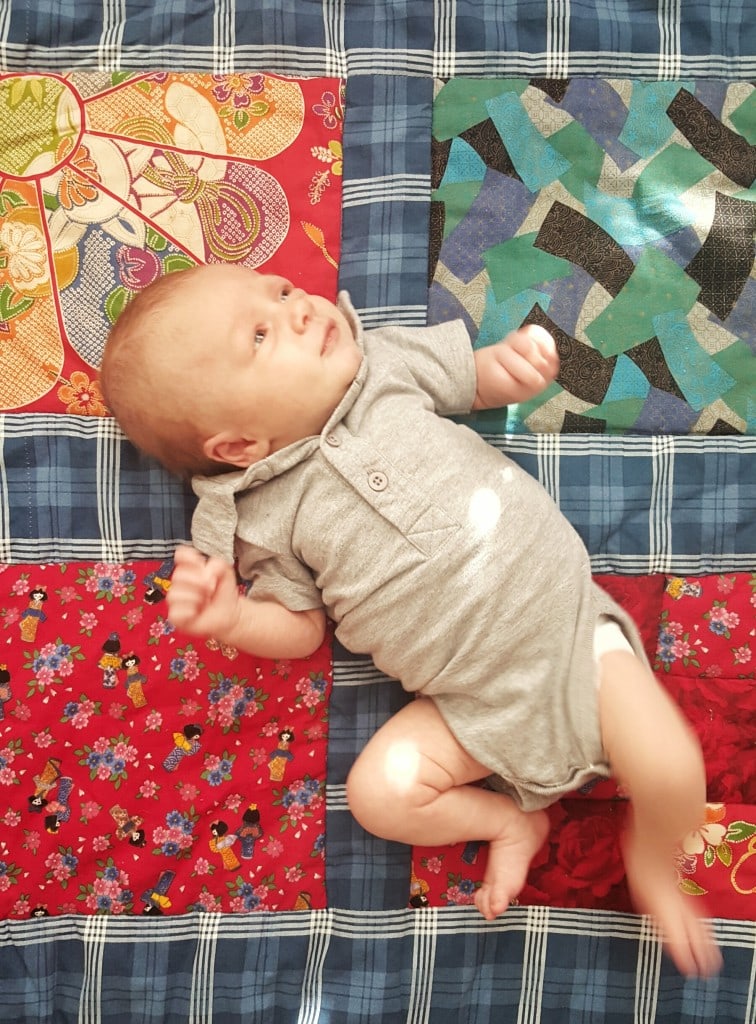 I don't think we've had any massive mishaps so far, although last week visiting my great grandmother in the nursing home Beck did have a massive blowout, had to be immediately changed from head to toe, then peed on her SECOND outfit about 2 hours later but I didn't have a third outfit with me so we just...air dried.  Whatevs.  Of course I've adjusted and now carry 2 extra outfits with me, but where does THAT end?  I think we just...do the best we can and so be it.  Blowouts seem to come in waves for Beck, so the house rule is that she doesn't change clothes unless there is spitup, pee, or poop on her.  No changing for fashion, ain't nobody got time for that.  So, sometimes she'll wear an outfit for 3 straight days, and then one day she'll have 3 actual outfits.  It comes out in the...wash...get it..., and luckily she has some super generous family members and has approximately 8,376 outfits so I don't have to do laundry all that much.  Every time she has a blowout I think her diapers don't fit, but then I try a size 1 on her and they're still super baggy, which makes me happy because I can't manage the thought of her being in non-newborn diapers.  WHY does this phase go so fast?  Don't tell me...do all the phases go this fast?  WHEN WILL SHE HAVE KIDS SO I CAN HAVE BABIES AGAIN?

I probably just really jinxed Beck-at-15 with that last line.  Awesome.  The end.