Home » Funny » A Cartoon + Some Advice 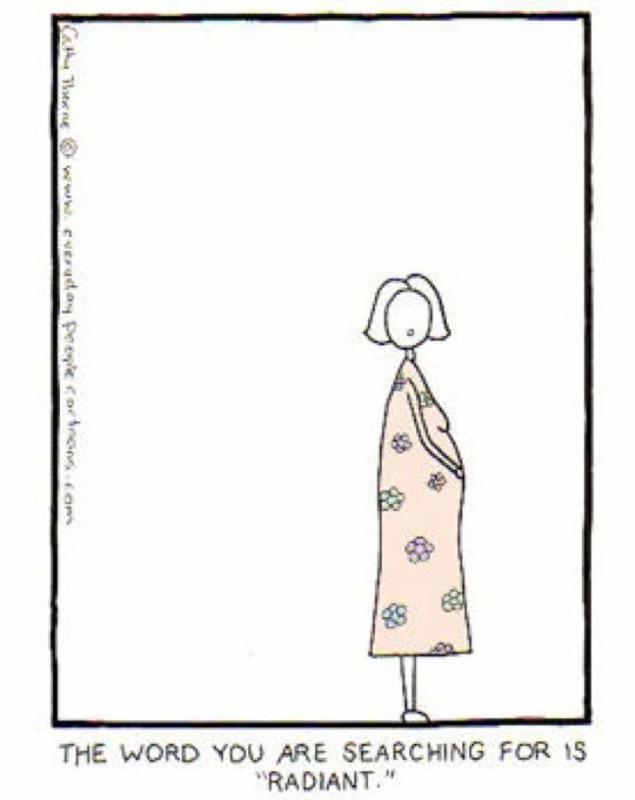 So, yesterday at the midwives (it feels like every damn day, I swear), Jay was recording my weight and was all "so, almost 20 pounds!"  And I didn't care, but I also felt the need to say, because it's true, "I don't feel like I've gained 20 pounds."  And he said VERY quickly, "you definitely don't look like you have!"

And I just stared at him thoughtfully and said "there is literally nothing else you could have said in that moment that would have been ok.  Well done."

So, he gets it.  But a lot of people seriously don't.  There is this....thing...where things you'd never ever say to a human suddenly become ok when someone is pregnant, right?

I mean.  Come on, people.  Can you even imagine saying any of those things to someone not pregnant?  But no, let's add hormones and discomfort and insecurity and THEN say those things.  Obviously a great plan.  First, there's obviously the assumption that gaining less is better because skinnier is better and fat is bad, and blah blah blah.  And OF COURSE we want to gain a moderate amount of weight and not become actually obese when pregnant.  Jay also pointed out that there are lots of people that I love hearing these comments from, but some that I just really don't.  To me, it's a lot about perception - be honest, you know when someone is all "yay the baby is getting big and you look cute," compared to "don't get fat" or "you look more or  less fat than other fat people I am currently retroactively judging in my mind." So, he can blame it on whatever he wants, but there are ways to be super duper cheerful about a pregnant body, and ways to be just ridiculously inappropriate.  My advice would be that if you aren't sure which category you fall into you ... might be the bad one.

I probably don't have a point here, I just kind of like that cartoon up there.  I do think that there are GREAT ways to comment on a person's body who is growing a human, but I also think it's totally fine to just skip anything relating to weight gain or loss at all because it really is so stigmatized in our society and can lead to some accidental didyoujustreallysaythattome moments.  I also think there's a comfort/closeness level involved - you know who you're close enough to talk about weight with, and if you wouldn't do it sans fetus why add it into your repertoire now that someone's pregnant?  Just ask how they're feeling and maybe offer to give them money or food or something - who doesn't love that?  If you're someone who always automatically comments on people's appearances the second you see them no matter what, well.....I don't know.

« Things To Google When You're Pregnant
Grown Up Uncrustables »