IT'S NOVEMBER SO WE CAN TALK ABOUT THE HOLIDAYS! 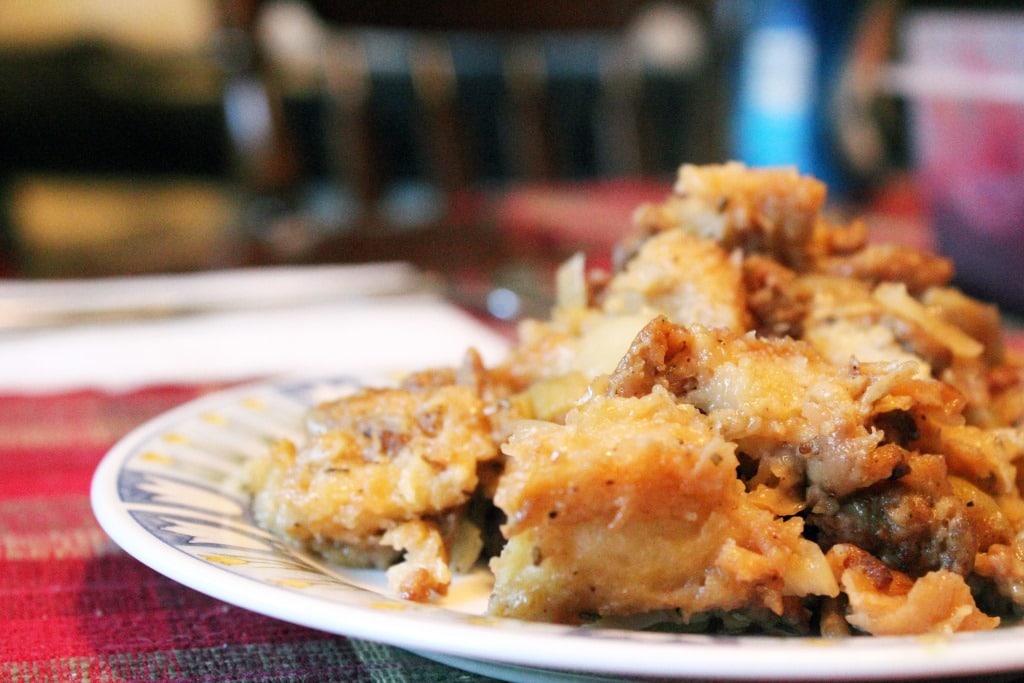 I've got lots coming up for them, guys.  Get out your stretchy pants.  Or practice some form of self control, it's totally up to you.

How was your weekend?  I made so many cozy foods and hung out in the mountains with bffs for our bud Wes' birthday, and it was a really nice awesome epic weekend without too much craziness but just the right amount of fun and beer and friends.

I hope your weekend was as much fun!

Let's get right to Thanksgiving.  It's 3 weeks from Thursday, can you believe it?  If you don't celebrate Thanksgiving, please don't worry.  You'll still want to make this stuffing every day of your life.

I made this last weekend when we went to the mountains in VA with Jay's comedy buddies, and we decided to have a Friendsgiving because WHY NOT.  It was perfect and fun, and a great excuse to bust out the slow cooker!

A lot of you have told me that slow cookers are a great vessel for stuffing, and you were right!  As promised, I didn't do any of that sauteeing THEN putting crap in the slow cooker.  NO SIR.  I did cook the sausage first to make it crispy and delicious, and made almost the whole thing 2 days in advance.  Then, when I was ready to "cook," I dumped everything in the slow cooker, wandered off, and BOOM!  Stuffing.  It was delish.

You need bread - a big loaf of crunchy bread.  You also need chicken stock, an apple, an onion, celery, rosemary, and sausage, if you're into that kind of thing.  ANY kind of sausage you like would be good!  Chicken sausage, spicy Italian...go nuts! 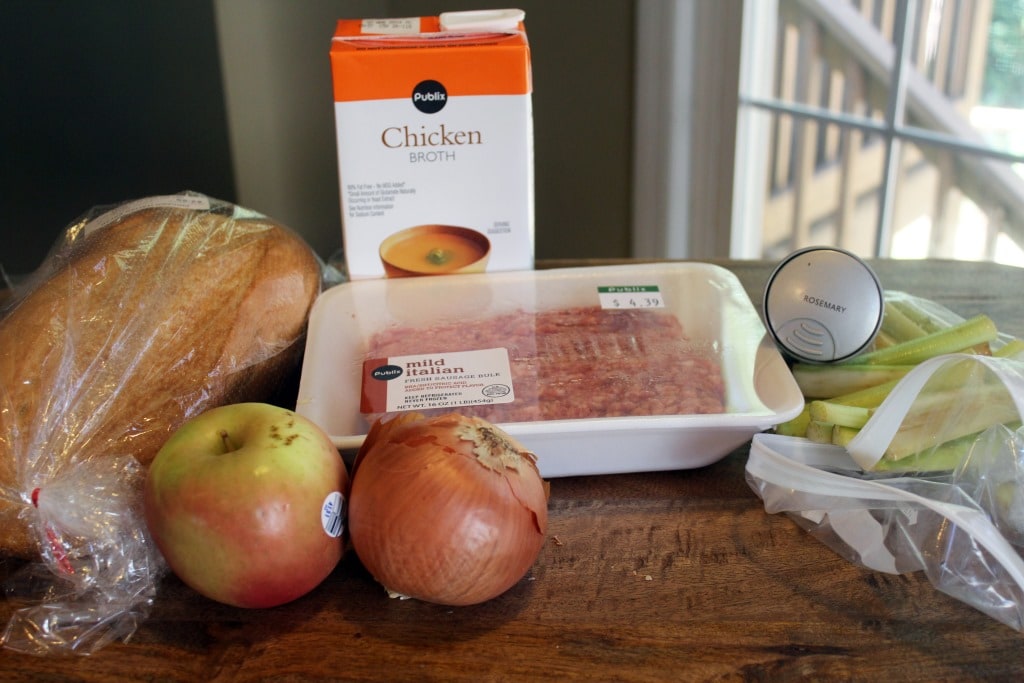 For prep, cut the bread into slices... 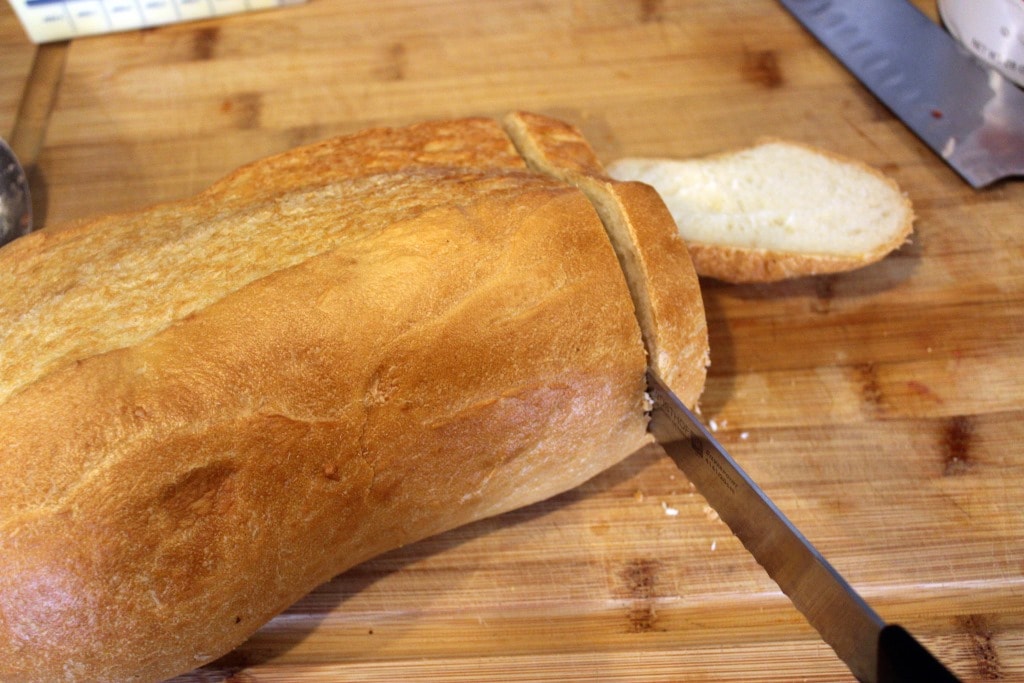 ....and the slices into cubes. 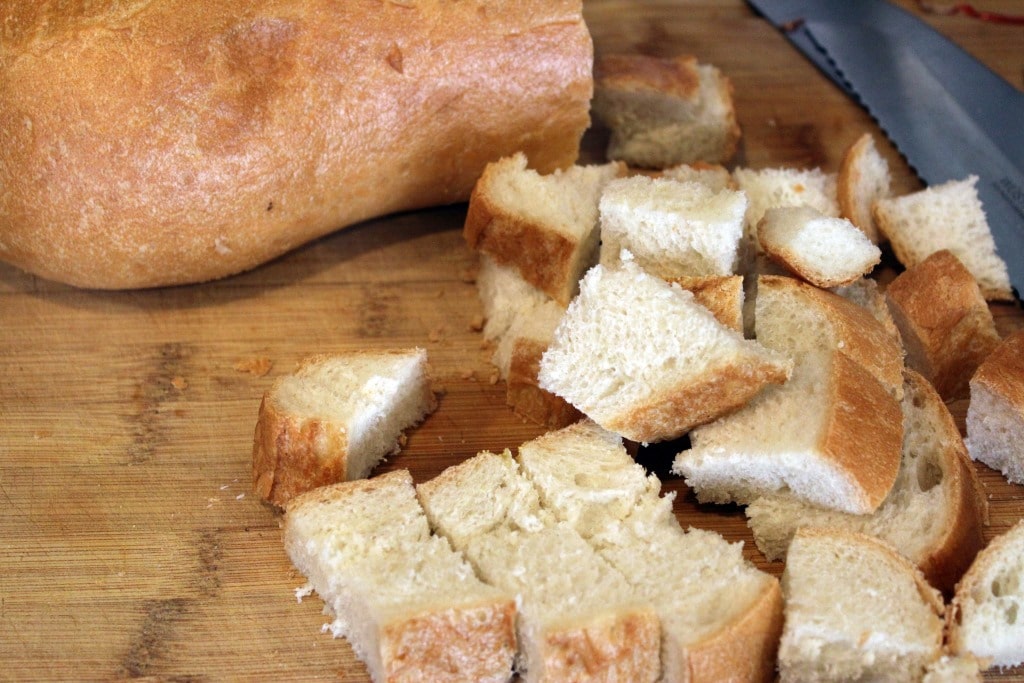 The bread should be dry and crusty, so I let it sit uncovered in the slow cooker bowl for 2 days.  Some bakeries sell old bread and a discounted price, so ask if you can go that route, too! 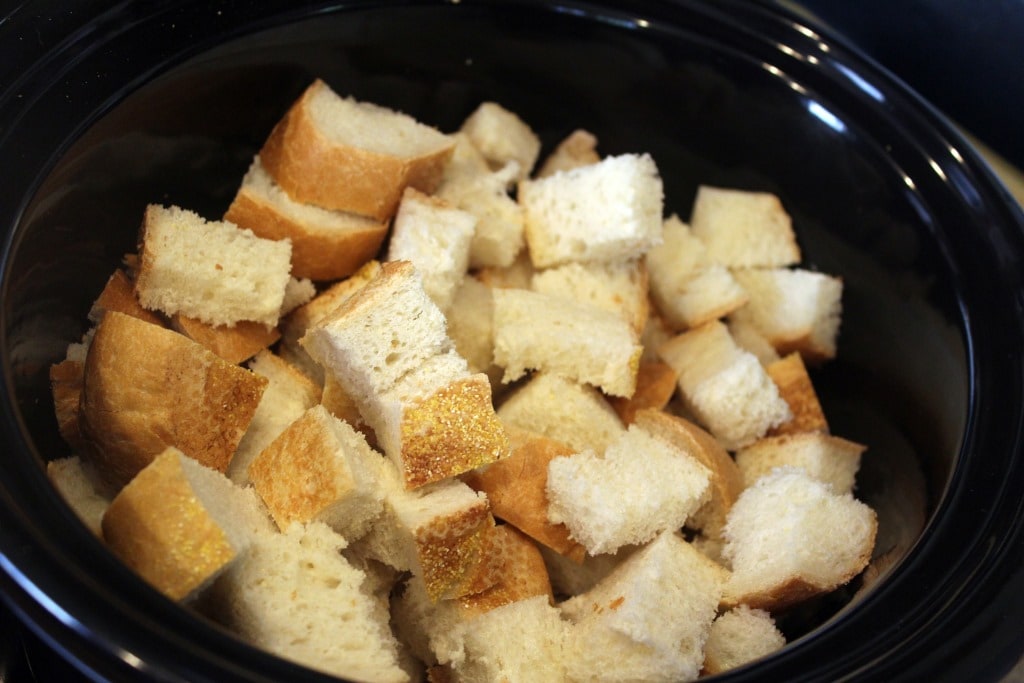 With the veggies and the sausage, you could prep them two days in advance, or on the day you're cooking - up to you!  Cut the onion into slices. 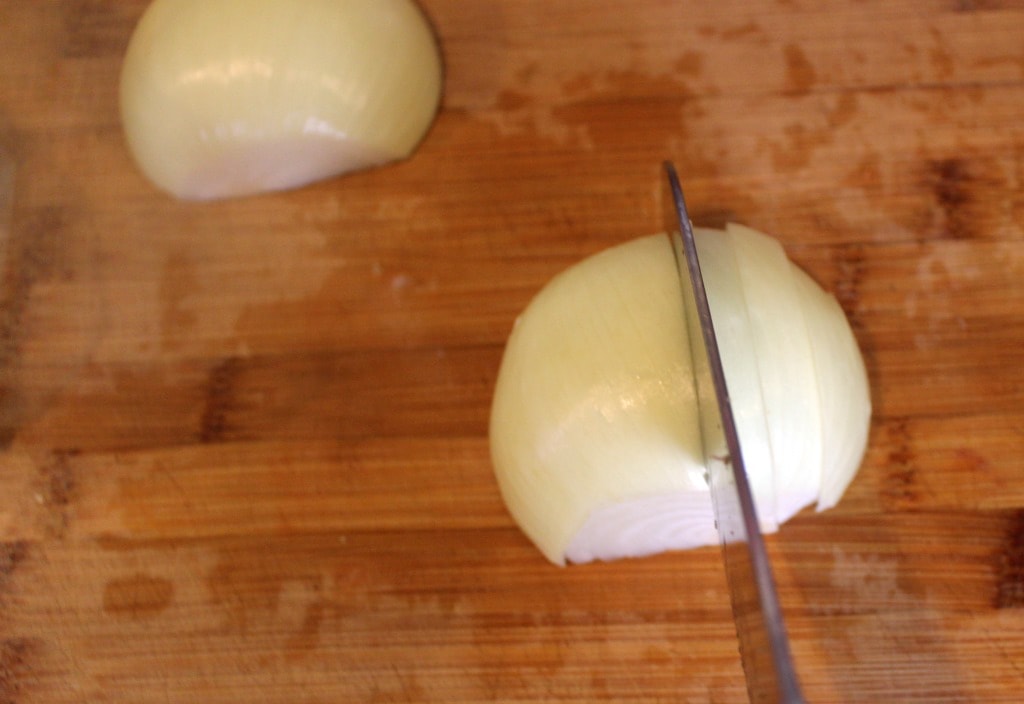 Then rotate the slices to form a dice. 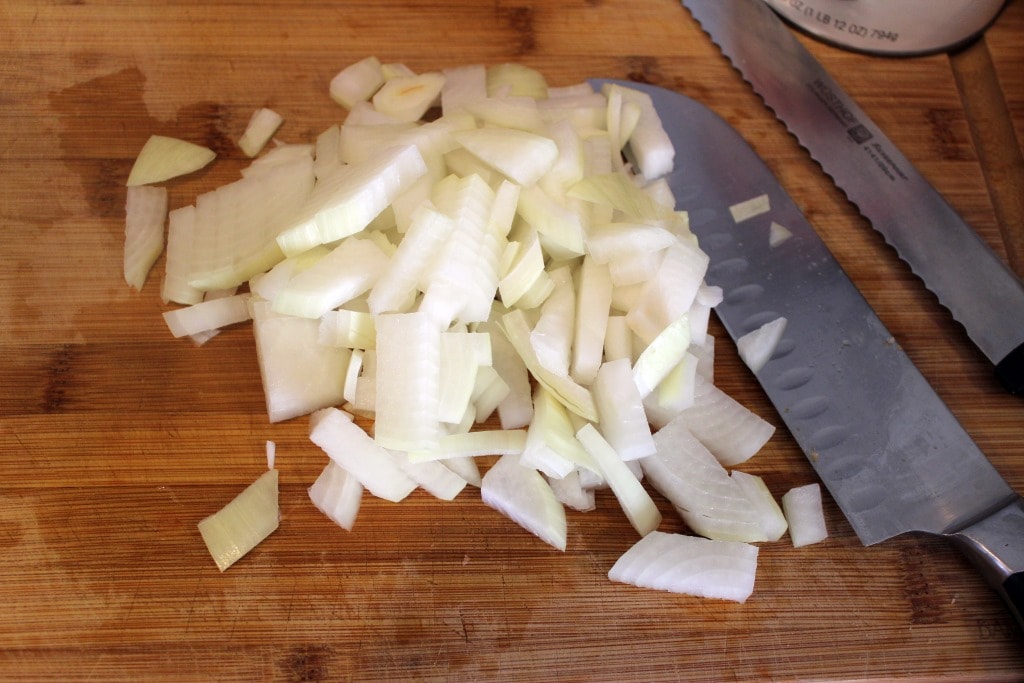 I had some random browning celery sticks, but if you use fresh celery that's fine too, I won't tell.  Cut the sticks into strips, then the strips into little bits.  I like small veg in stuffing, but you can make yours larger if you'd like! 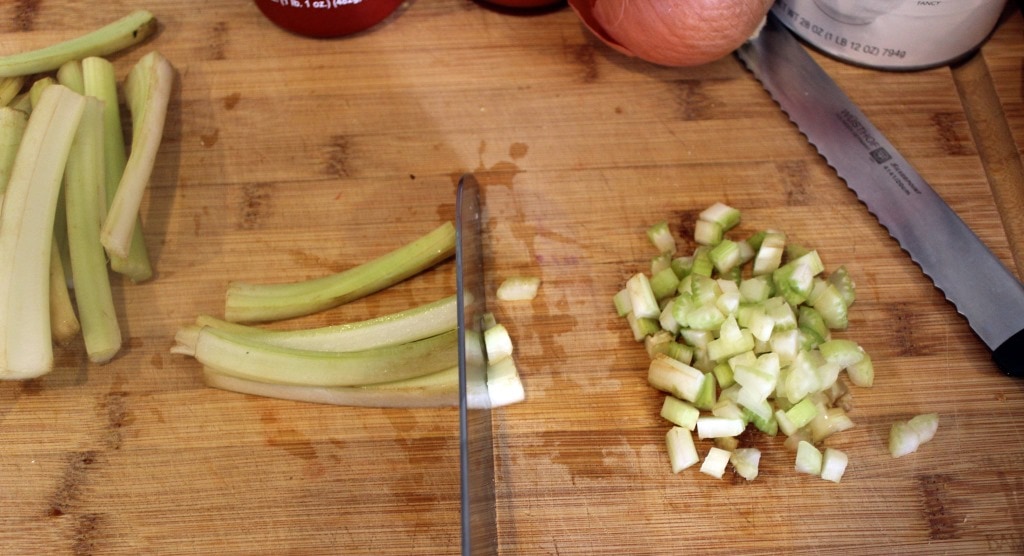 Heat a skillet to medium-high heat for the sausage.  Remove any casing, and cook the sausage for 15 - 20 minutes until the sausage is browned and cooked through, using a spoon to break up the sausage into small bits. 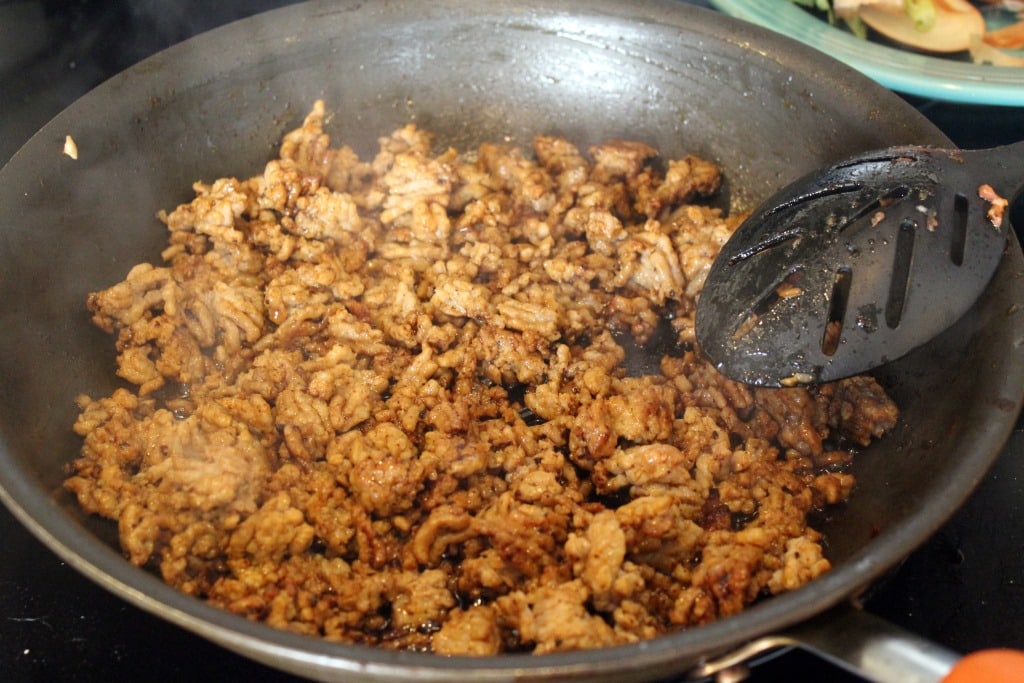 Now, about 4 hours before you'd like to eat, layer the veggies and sausage over the bread cubes with 1 teaspoon dried rosemary. 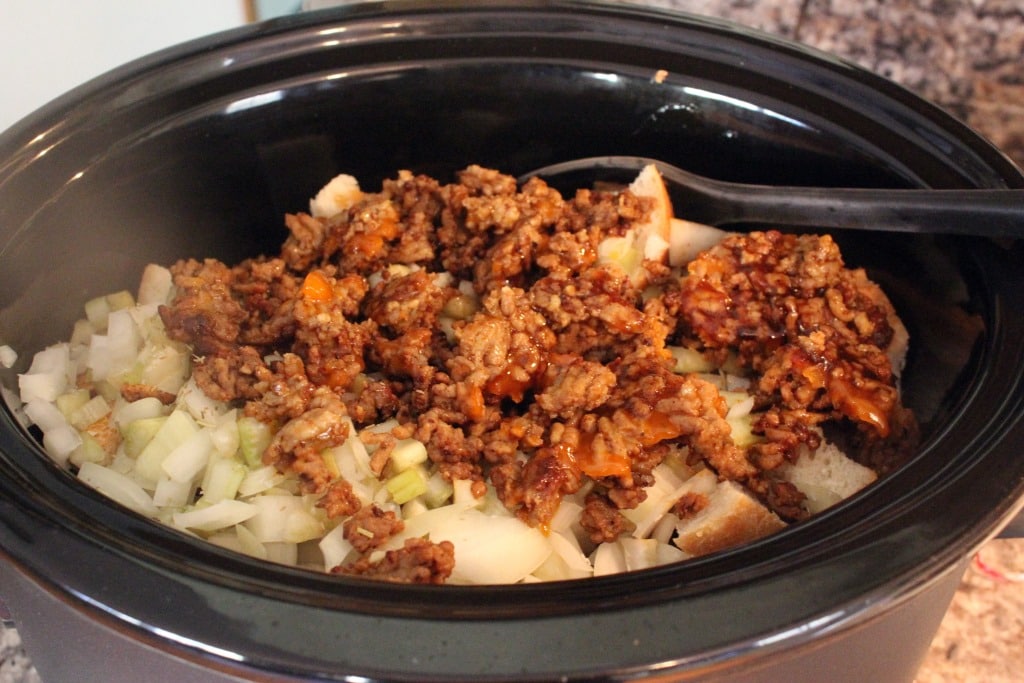 Pour the stock all over, then stir the mixture together. 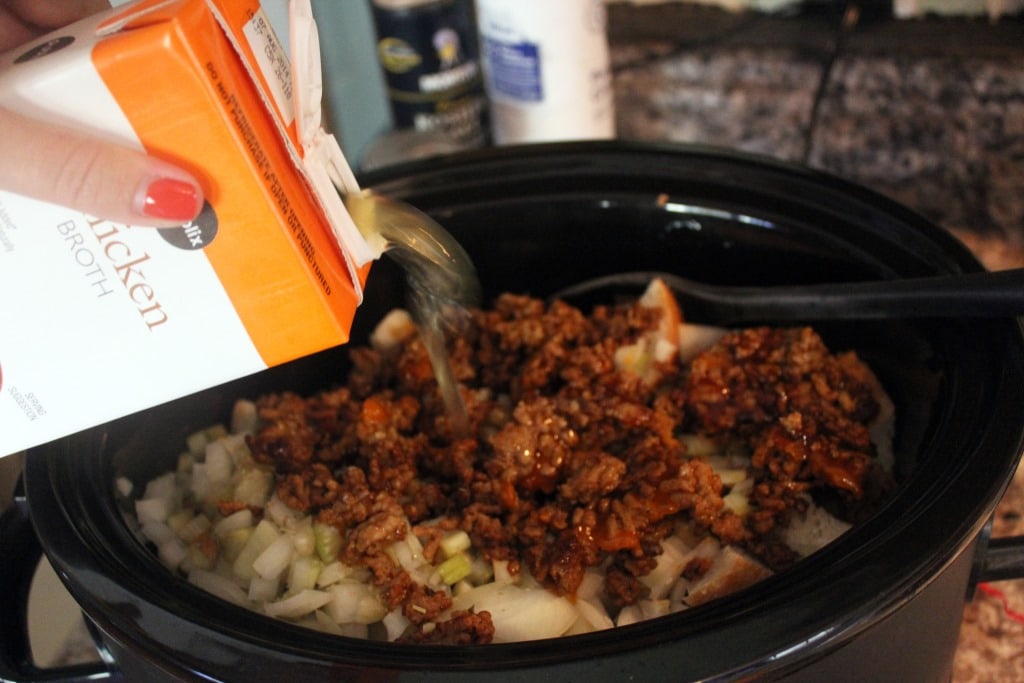 I cooked this for about 3 hours on high, stirring every 30 minutes or so, then pressing the mixture down to help it stick together.  You can skip the stirring, but you might end up with some really crispy bits on the bottom and mushy bits in the center - that's really up to you, though. 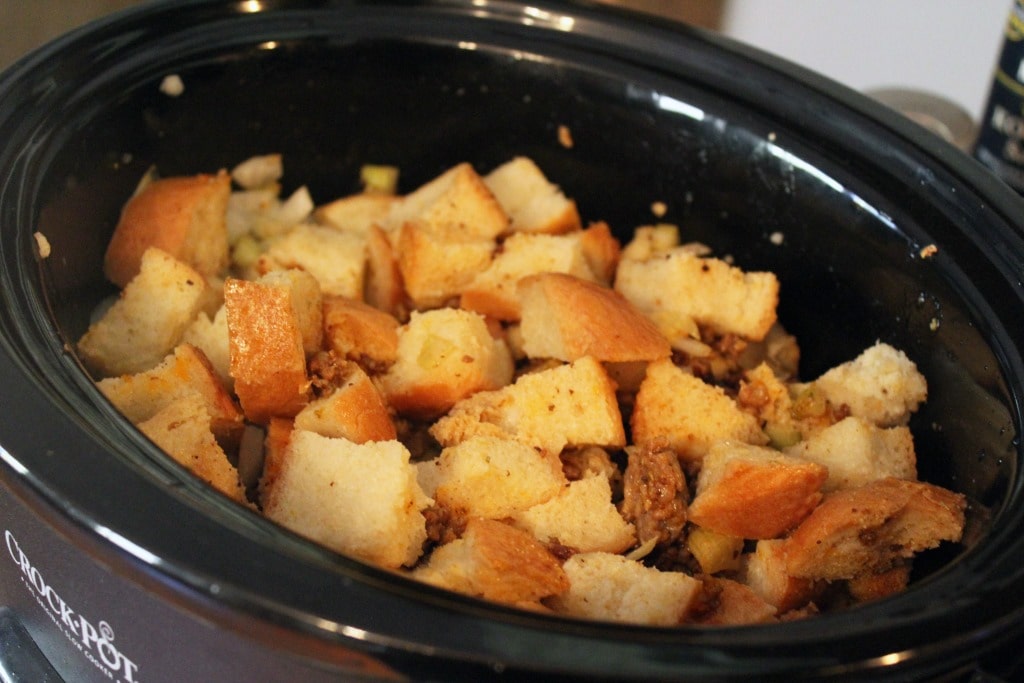 One hour before you'd like to eat, chop up the apple. 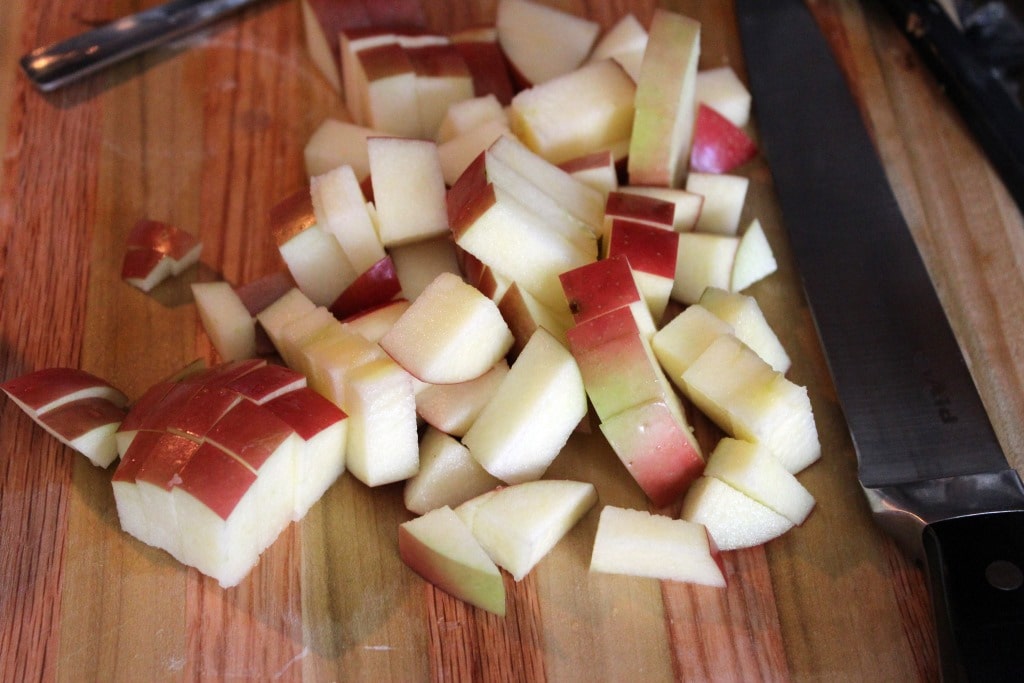 Throw it into the stuffing, and give it a stir - adding the apple late in the cooking process keeps it slightly crunchy, and the sweetness with the savory stock and sausage is KILLER yummy. 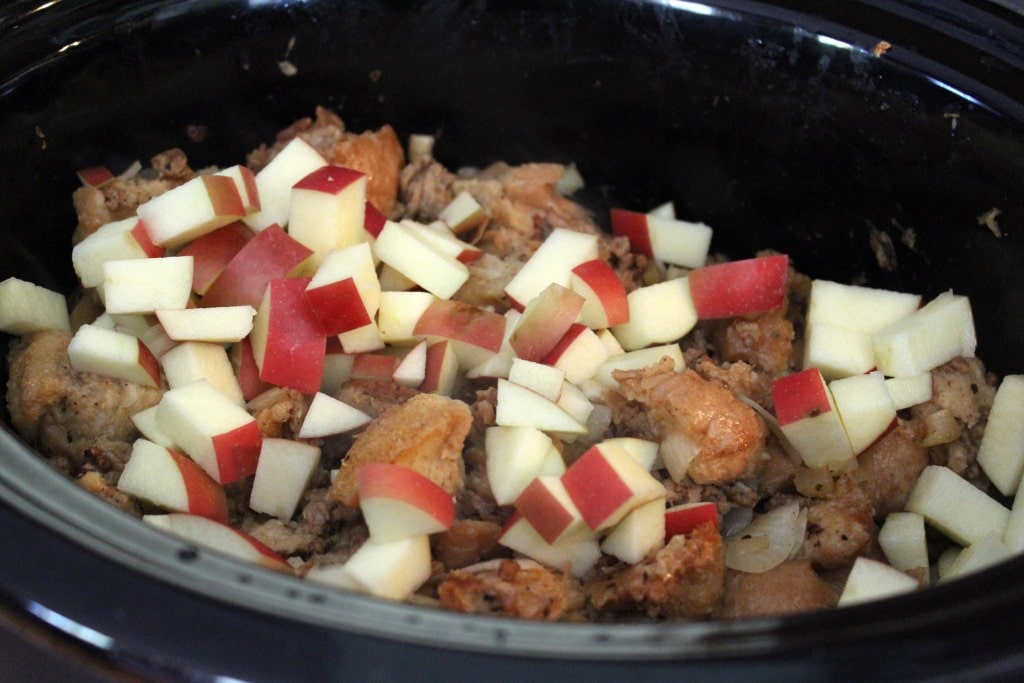 In hindsight, I wish I'd added some cooking spray to the crock pot before I started this - we had a wee bit of stickage, but the stuffing was still delicious! 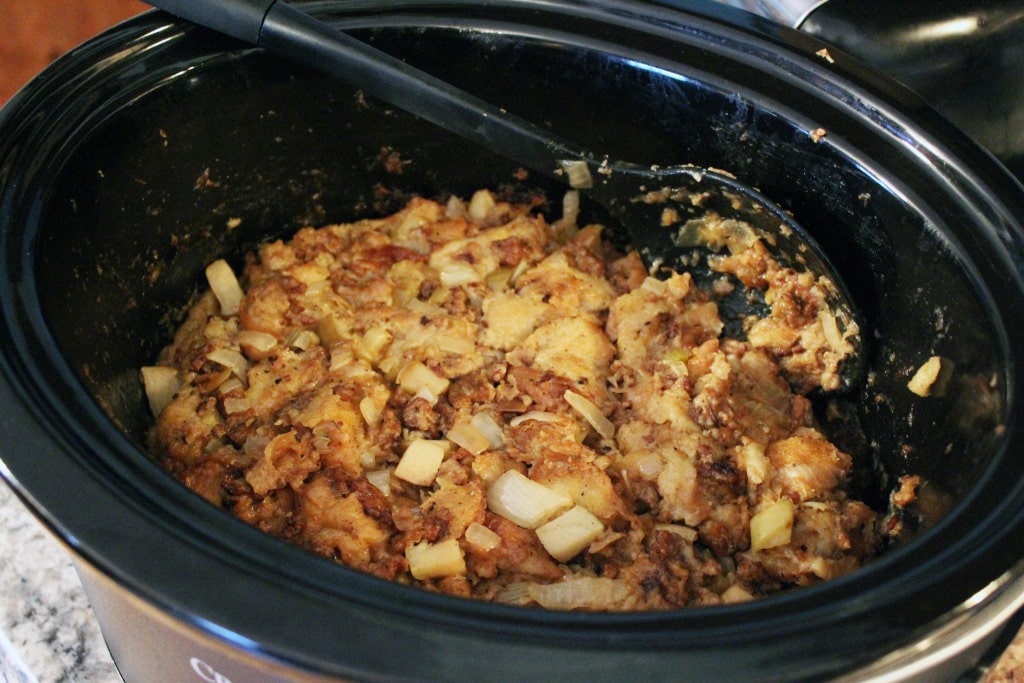 So that's it!  Cook, stir, press down, repeat.  If your stuffing seems dry, drizzle in a little more stock - not too much though!  Since the slow cooker is covered, the vegetables will release some liquid and not dry out like a roasted stuffing would, so just add a little bit at a time. 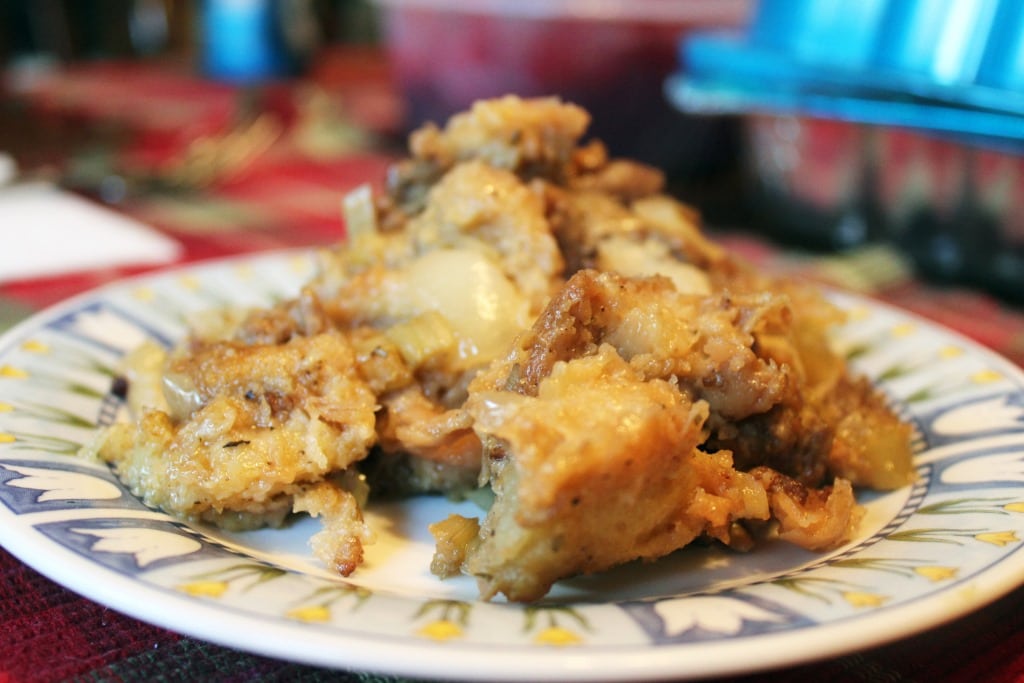 I served this straight from the Crock Pot, which was handy for not dirtying another dish, but you could tryyyyyy to extract this kind of in one piece if you want.  Since there isn't much fat and no egg like some recipes call for, the stuffing is more loose - hence, why it's a nice idea to use a spoon to press it together as it cooks. 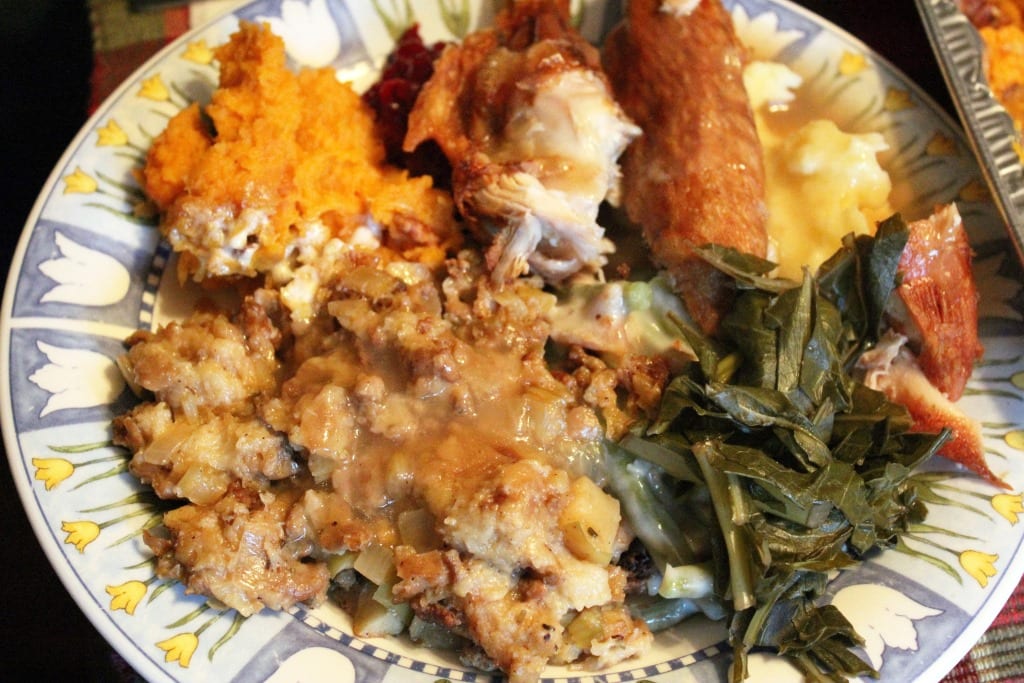 Enjoy this!  It was tasty and simple to make - we'll definitely be making it again.  Like, maybe for real Thanksgiving.  Whatever.  Tis the season!