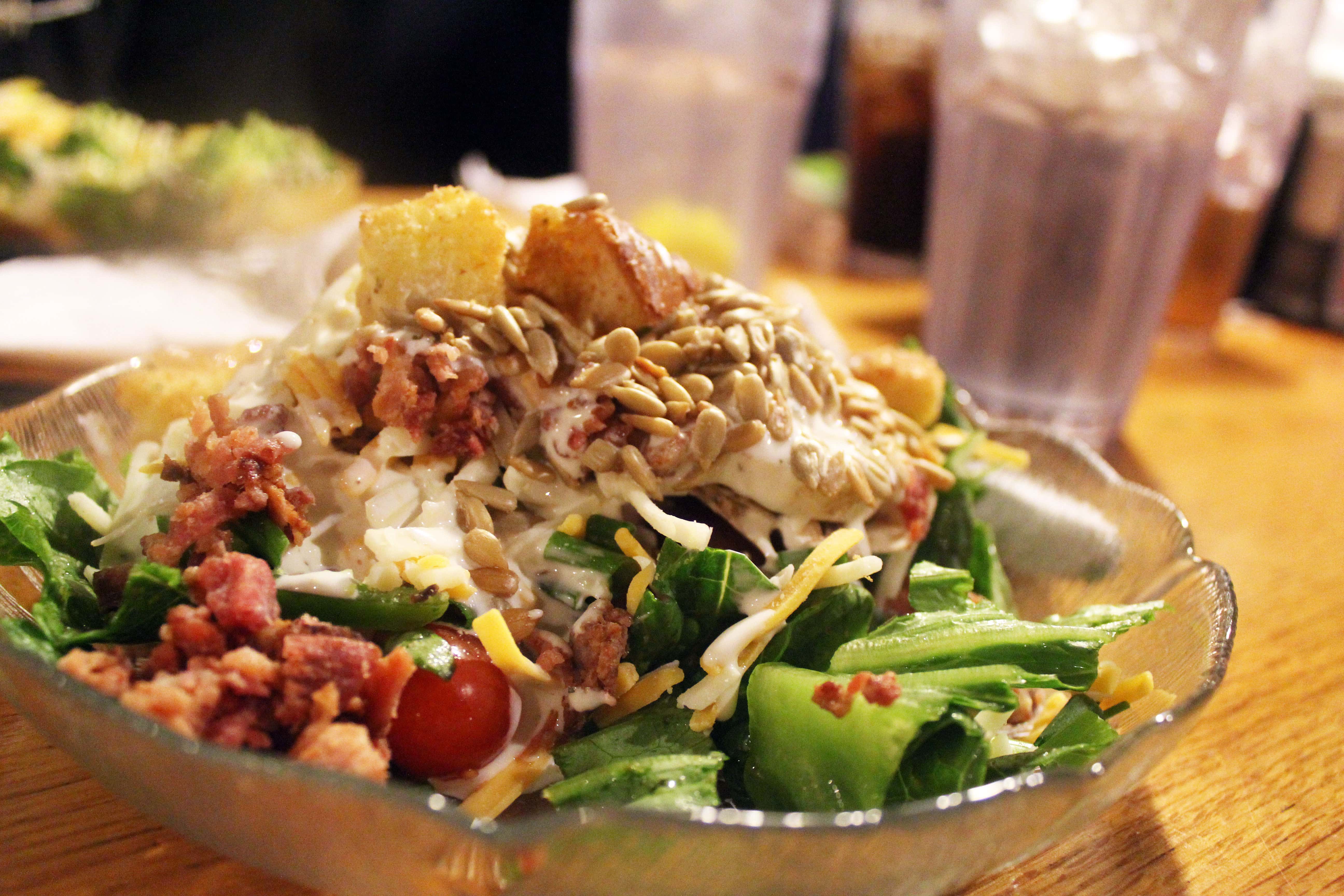 Over Labor Day weekend we went to Boone, NC with some friends Jay knows from his old life in DC.  We had a blast, we ate, we drank, we cooked, and we heard lots of stories about what a terrible comedian Jay was.

More on that later, though.

Also while we were there, our friends requested that we find a great BBQ place since there aren't tons of great places to get pulled pork where they live.

Or, any, according to them.

So, we found this place.  Bandana's Bar B Que and Grill.

Bandana's has a sweet website and decent UrbanSpoon ratings.  So...suffice it to say that on our one night out searching for something that people were REALLY craving, we were expecting a lot.

We gave the place a C+ rating.

Listen, it wasn't bad at all.  The menu was diverse, offering a lot of options from the smoker, grill, and fryer.  There was also a MASSIVE salad bar, which was kind of a draw for us.  We'd been eating like poop for three days and wanted an option for some legit veggies.  The salad bar itself was actually good! 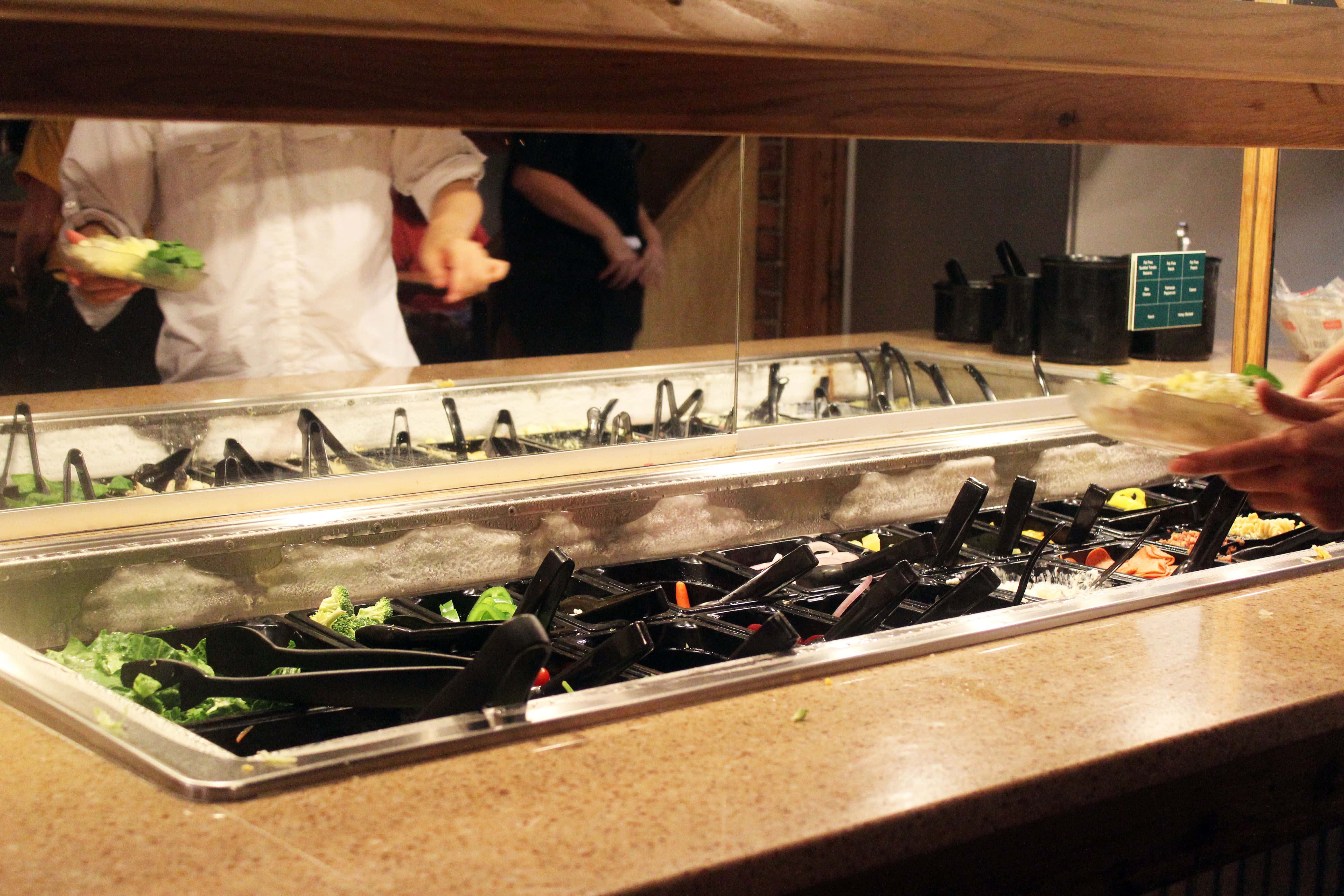 And, there was nothing BAD.  There just wasn't anything that wowed us to the point that we're dying to go back.  It was just meh, so we were a little let down given our excitement for some fabulous pulled pork!

If forced to choose, I'd say that the worst part of this place is the atmosphere.  There is nothing special about it.  No music, cool decor, nada.  Online, the place looks like a sports bar, so we were eager to see a beer selection and maybe some TVs highlighting the first night of college football.

Instead, we were presented with an almost sterile restaurant with standard order furniture - kind of like a nursing home cafeteria, I'm sorry to say.

Our server was friendly and helpful, but didn't offer us drinks, to the point that half the table thought it was an alcohol-free establishment.  When we saw one person drinking a beer, we had to ask what was available since there was no visible bar.  Standard domestics were the only options, and I didn't dare ask about wine. 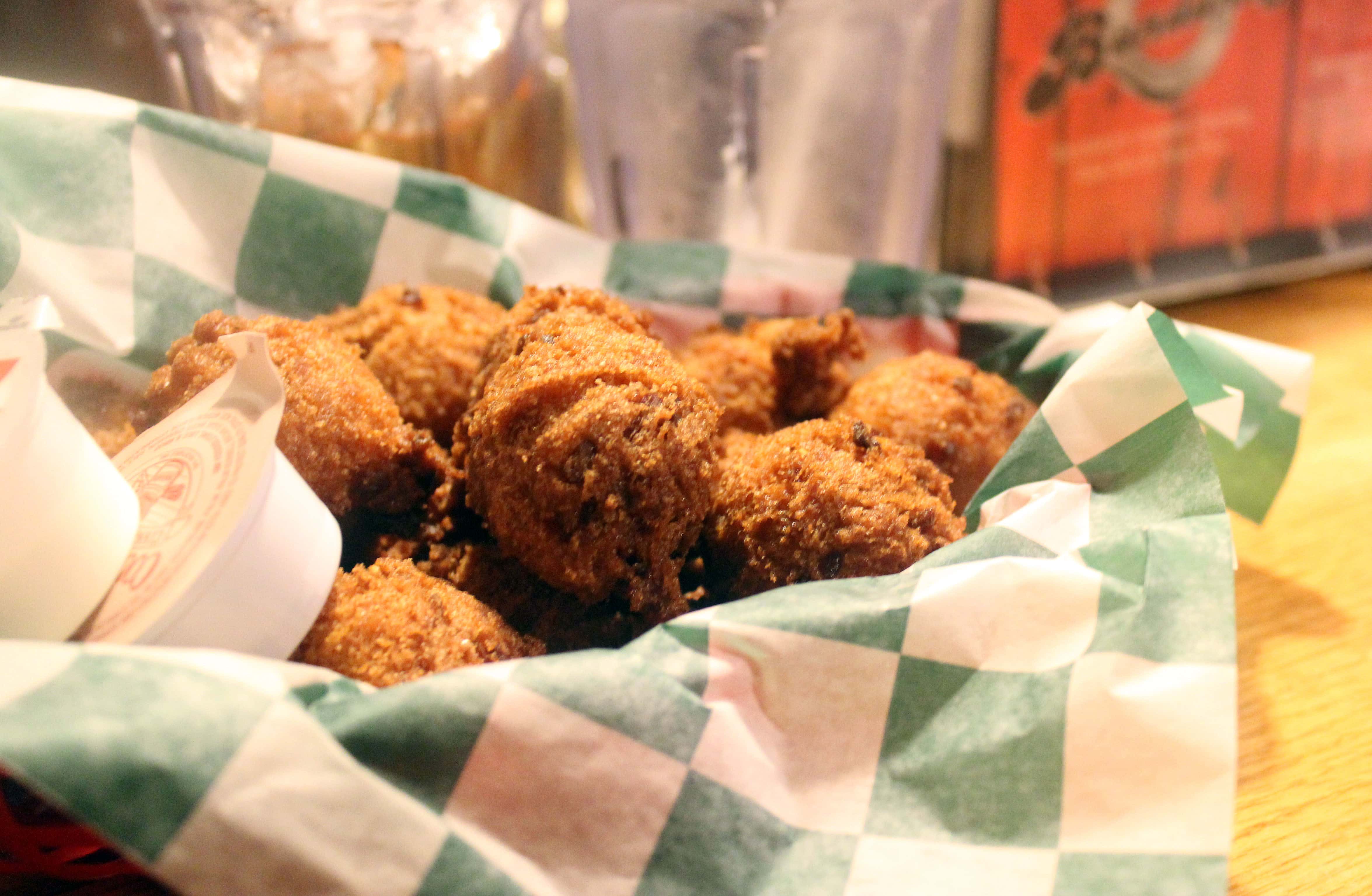 About half of us ordered the salad bar, which was a bit sparse given that we were there at 8pm (almost closing time in those parts) - we all would have liked to see it a bit more robust, but we had come to a sleepy restaurant that didn't expect a loud group of drinkers to enter after 6pm.

We shared the appetizer sampler for the table, which was great - we all wanted some fried standard bar food, and this definitely delivered.  Again, nothing was amazing, but nothing was bad either. 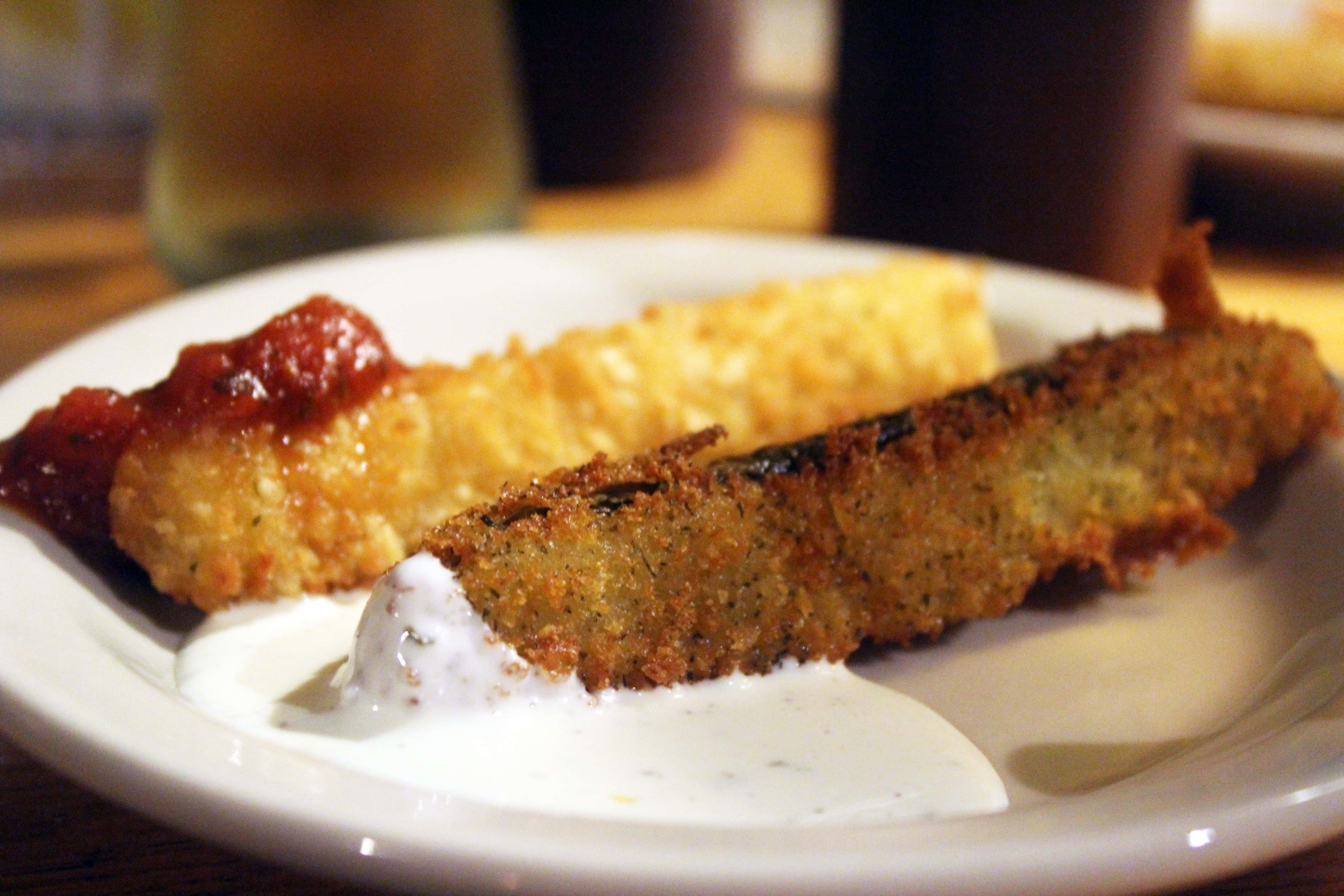 At the risk of sounding like a broken record, the same goes for our entrees.  Anything from the smoker was definitely the best, and other things failed to impress.  One of the things we loved about the menu was that you could add a bit of meat to the salad bar, rather than adding the salad bar to a full meal.  I ordered salmon alongside the salad bar, and it was DRY.  I definitely think salmon should be at least medium, if not less cooked, so this was disappointing for me.

Jay ordered smoked turkey to go with his salad bar, and it was like lunchmeat.  I don't know what else to say about that.

We also had ribs ordered at the table, and they appeared great - they were devoured in seconds!  In hindsight, it seems as though some of us simply didn't order correctly.  My beef with that, of course, is that items shouldn't be on the menu as fillers - if you aren't good at cooking fish don't offer it! 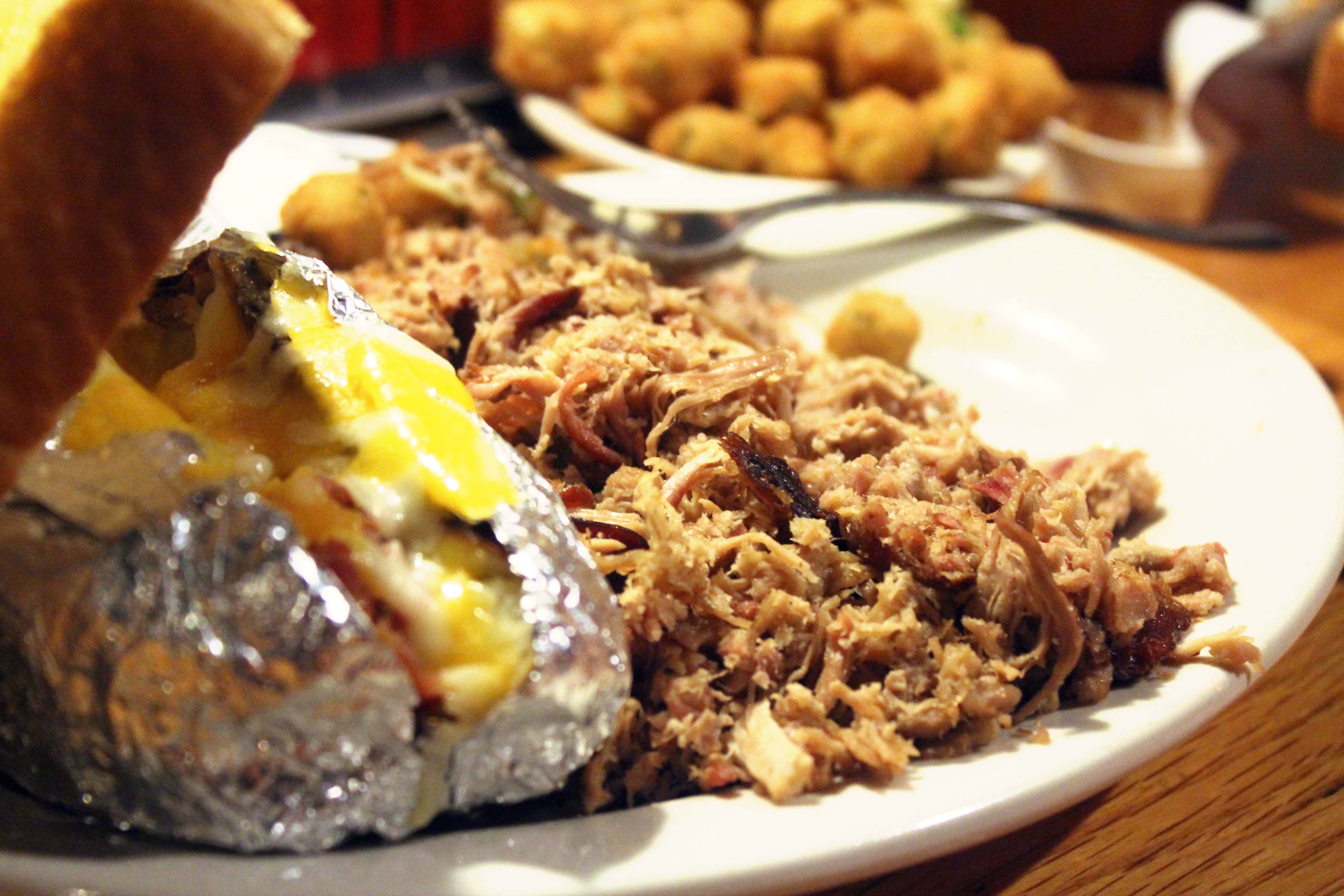 Overall, we had a great time because we were with great friends, and there were some nice parts of the meal.  I can definitely see the salad bar being a nice draw for a lunch, or the fried appetizers coupled with pitchers of beer perfect for a Friday night - if only the game had been visible to us (if it was even on).

Beyond that, though, I think we'll find somewhere different for BBQ next time we're in Boone.