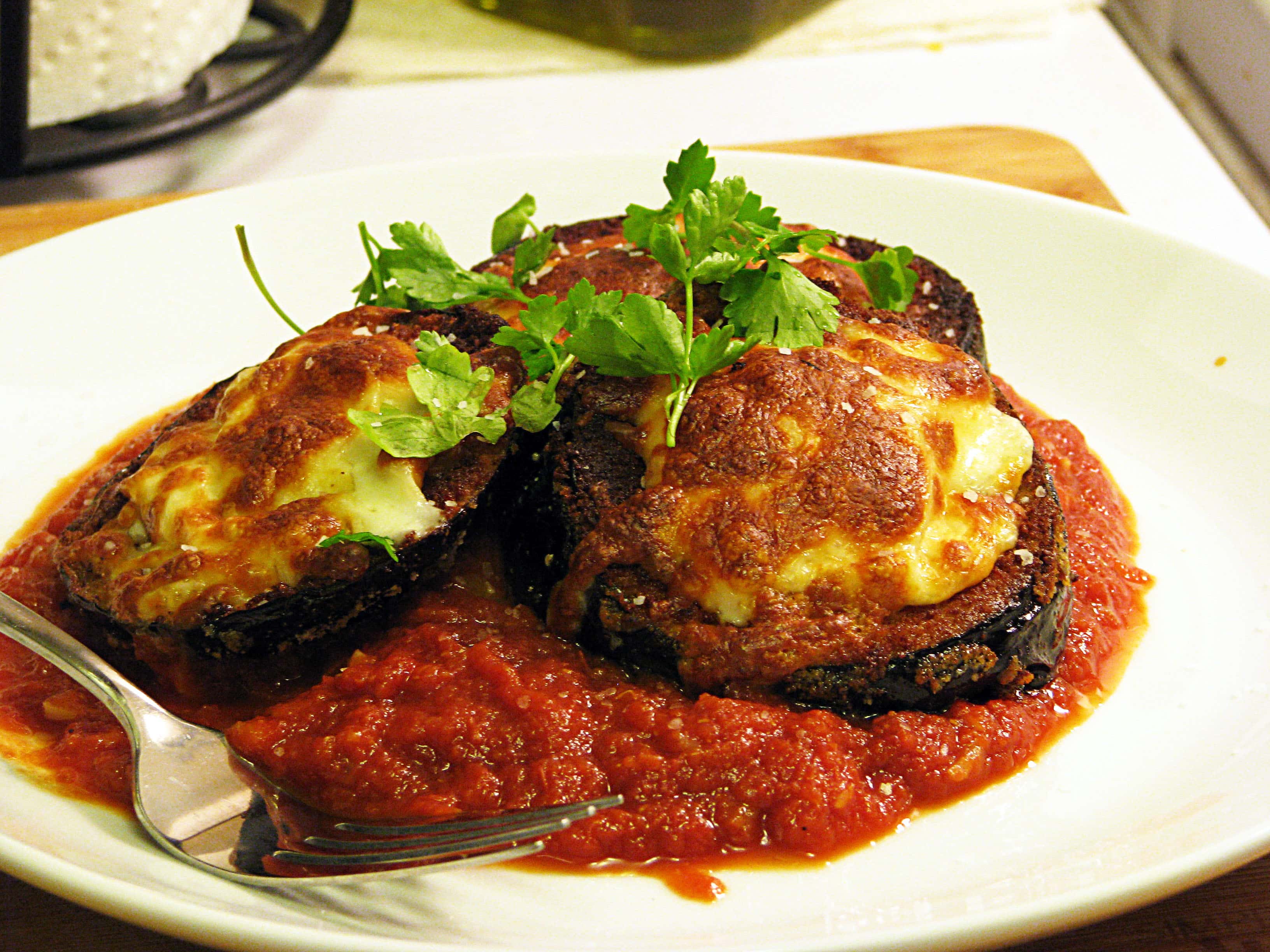 This is another fake-fancy meal that is just SO delicious.  I made it last week after Jay and I hiked 7.2 miles (more on that later), and it was the perfect combination of healthy via the tomato sauce and eggplant and decadent via the breading and, well, bread that I served with it.

This is a pretty one too!  It doesn't take too long to make so you can throw it together on a weeknight or on a weekend when you're entertaining and want something fabulous that doesn't require a ton of ingredients or effort!

You'll have to determine how much eggplant you need, but 2 or 3 "steaks" is usually enough per portion, and less if you're serving pasta with this!  One medium to large eggplant is more than enough for 3 portions.

When you're choosing eggplant you want them to be firm with no bruises, mmkay?  Smaller is preferable because they'll have less water content.  I never, ever say that smaller is better, but it's true here (sorry, Mama). 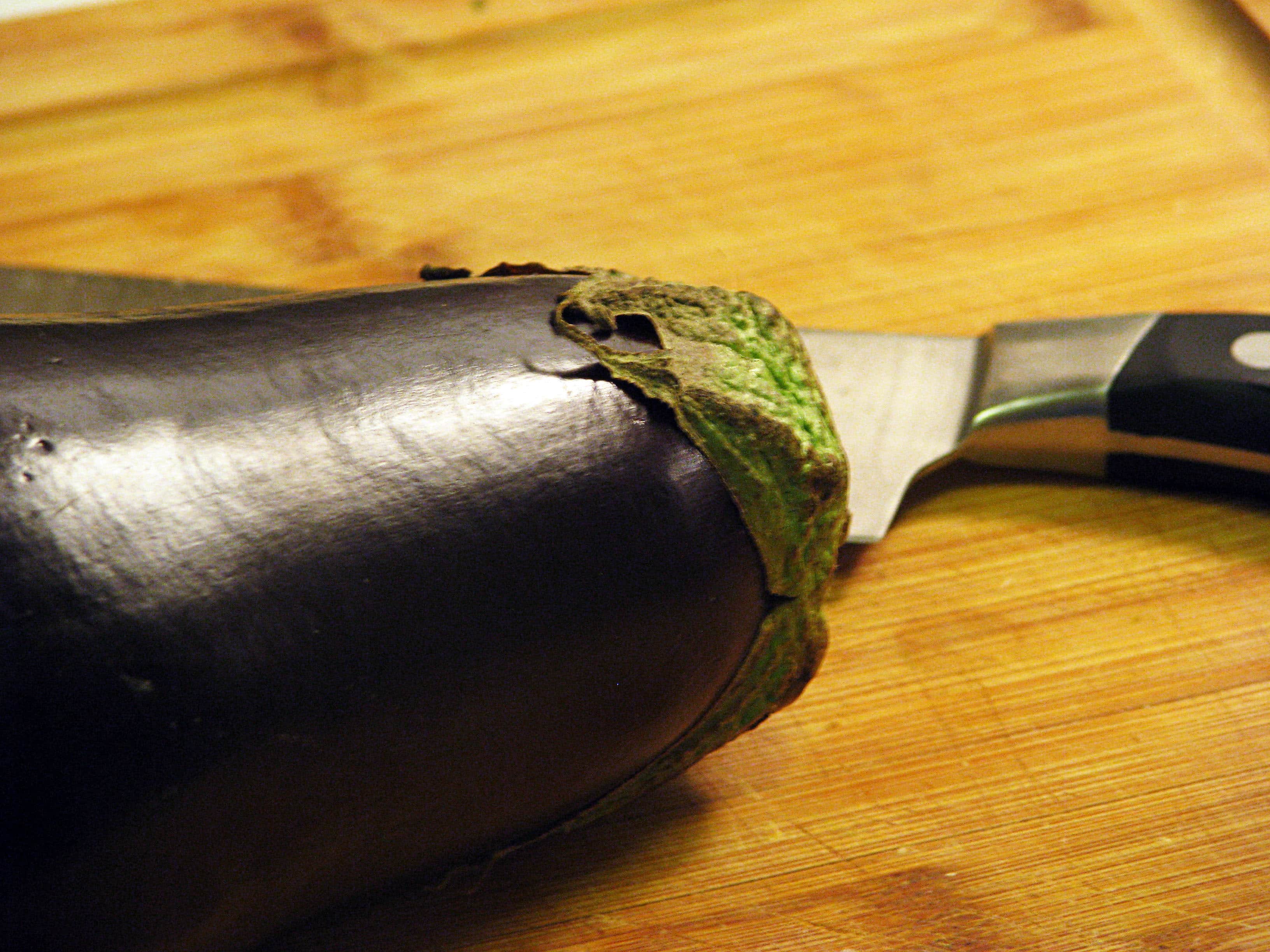 Cut off the stem end of the eggplant and cut the flesh into thick slices - you can use the other end, don't throw it away! 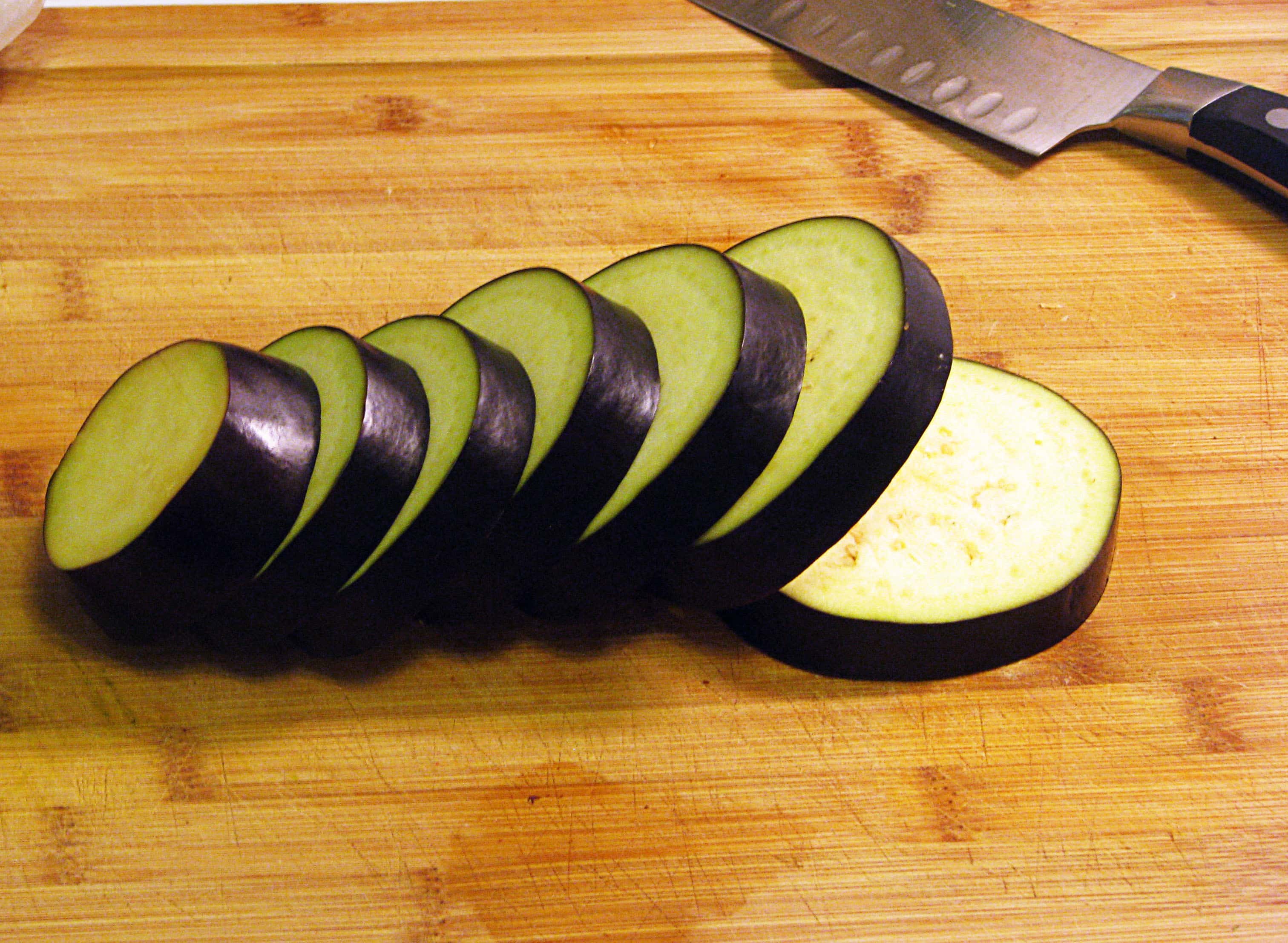 I just love eggplant.  It's earthy and creamy when cooked and just....great.  That's all.

Since the eggplant does have such a high water content, it's nice to get some of the liquid out before you fry it so the eggplant doesn't get goopy and mushy.  To do that, sprinkle the eggplant slices lightly on both sides with salt and lay them on paper towels.  You'll see beads of water form pretty quickly! 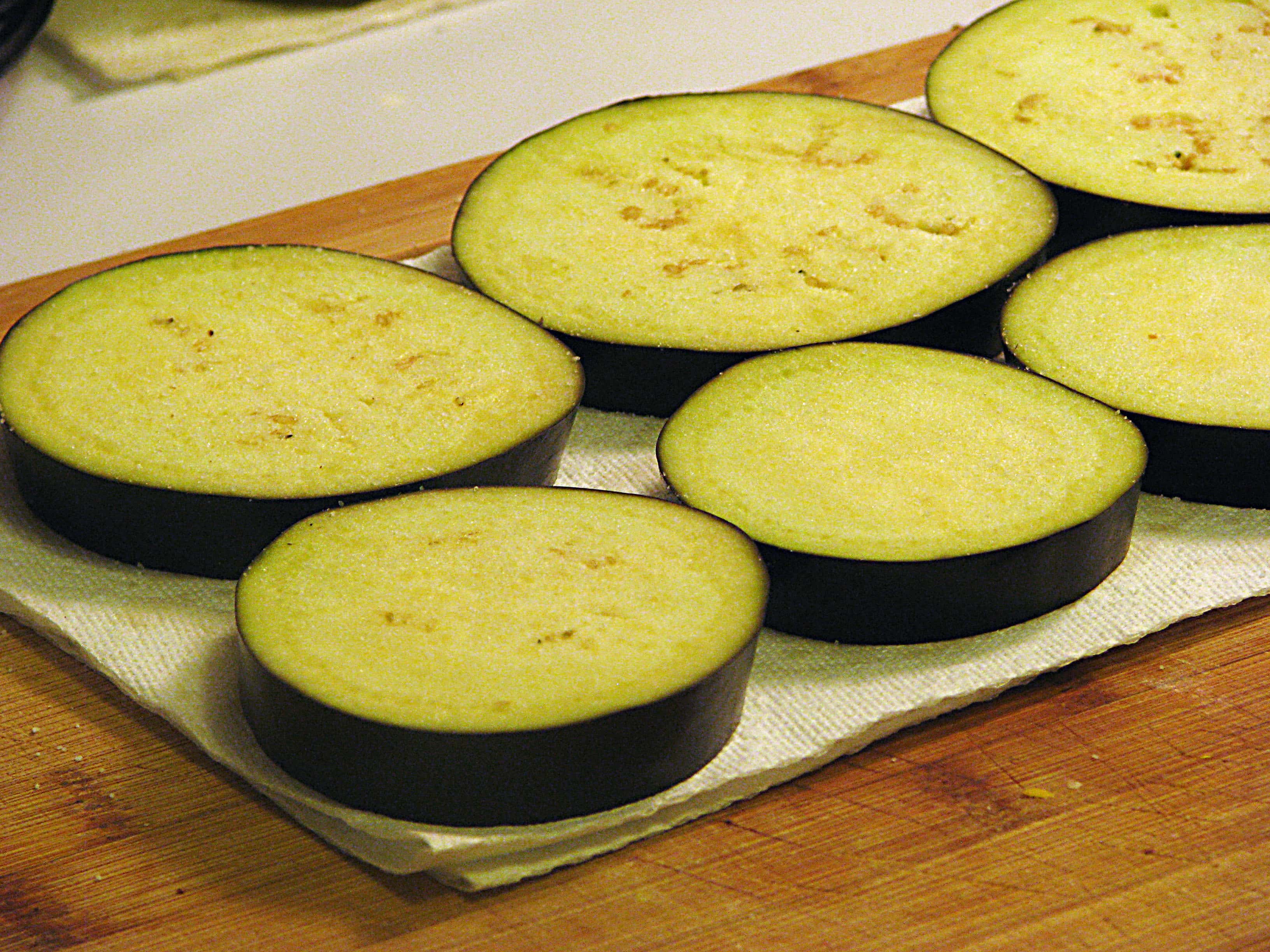 While the eggplant is "weeping," I make my breading and marinara sauce.  If you're using jarred or leftover marinara sauce you can just heat it up, but making your own is very quick and easy - click the link here to see how I do it.  For this recipe I add extra crushed red pepper because the spice goes very well with the cheesy eggplant.  Use whatever sauce you like!

As the water comes out of the eggplant slices flip them over, then get ready to make your dipping stations!  I use one with liquid and one with breading - no 3-step frying method here!  That is partially because it saves calories and partially because I'm lazy.

Either way, use 2 egg whites and 1/2 cup milk or half and half for the liquid - whisk it together really well! 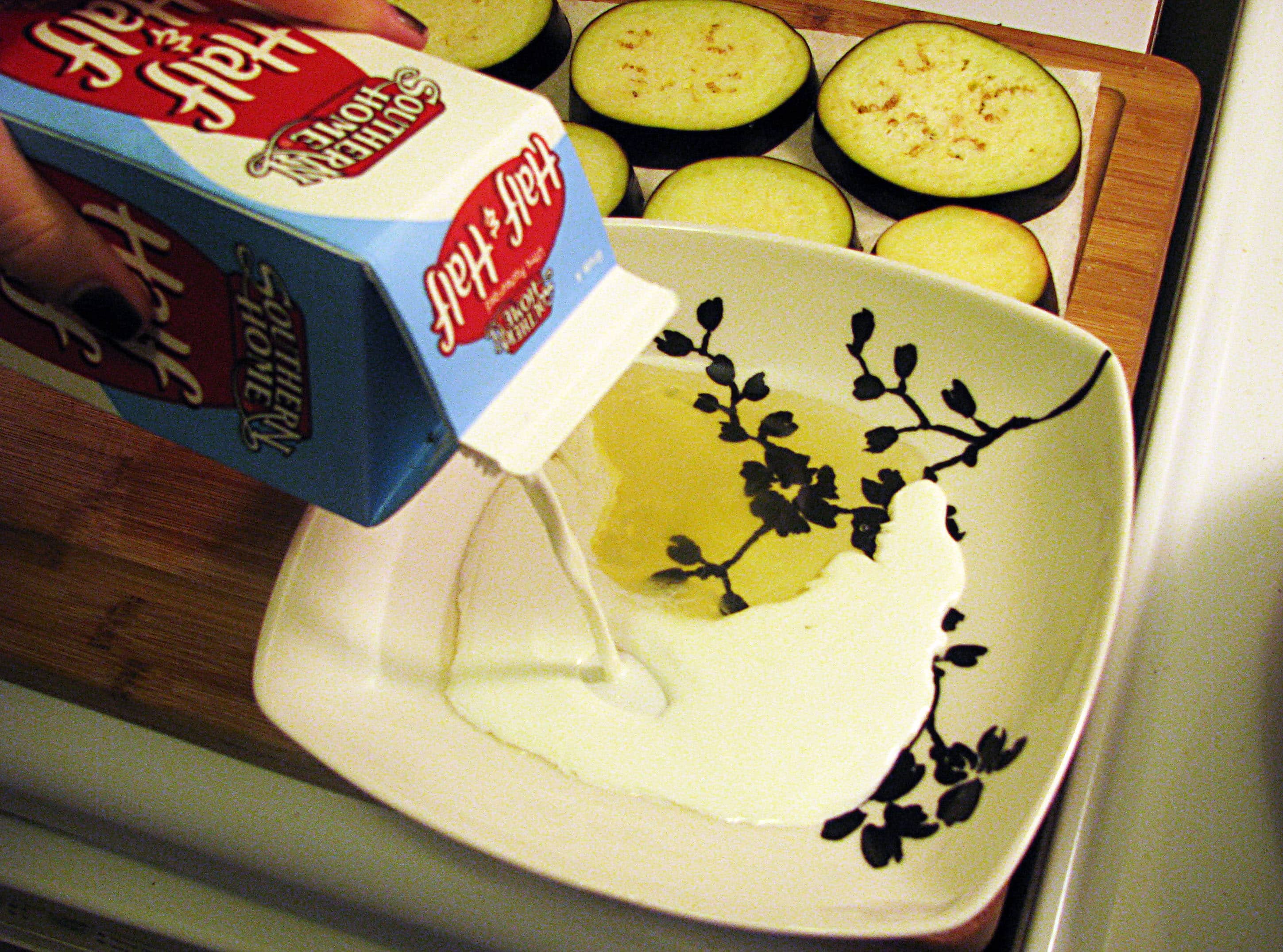 For the breading, grab some breadcrumbs and grated parmesan cheese: 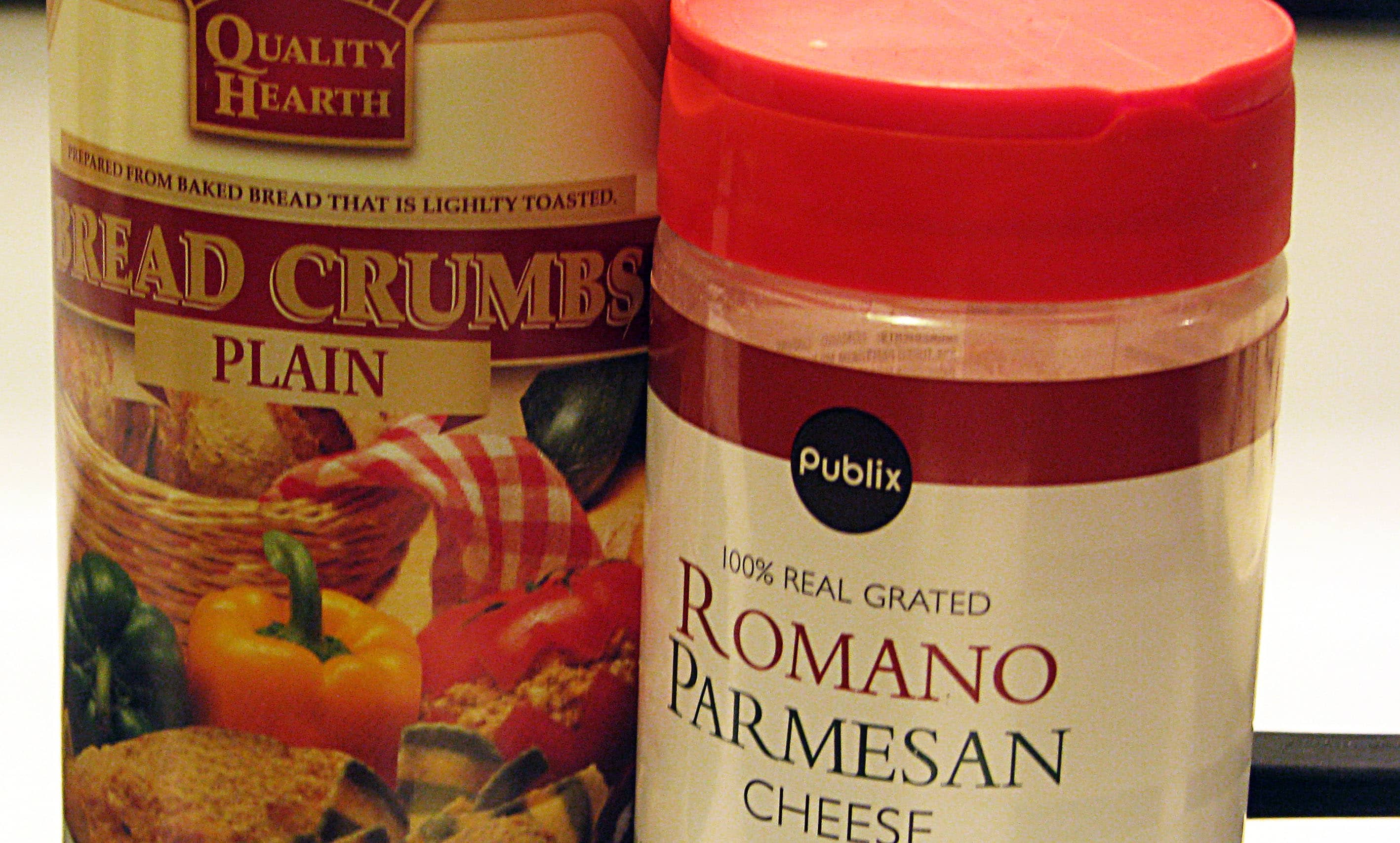 Use equal parts bread crumbs and cheese, then lightly mix them together with a fork. 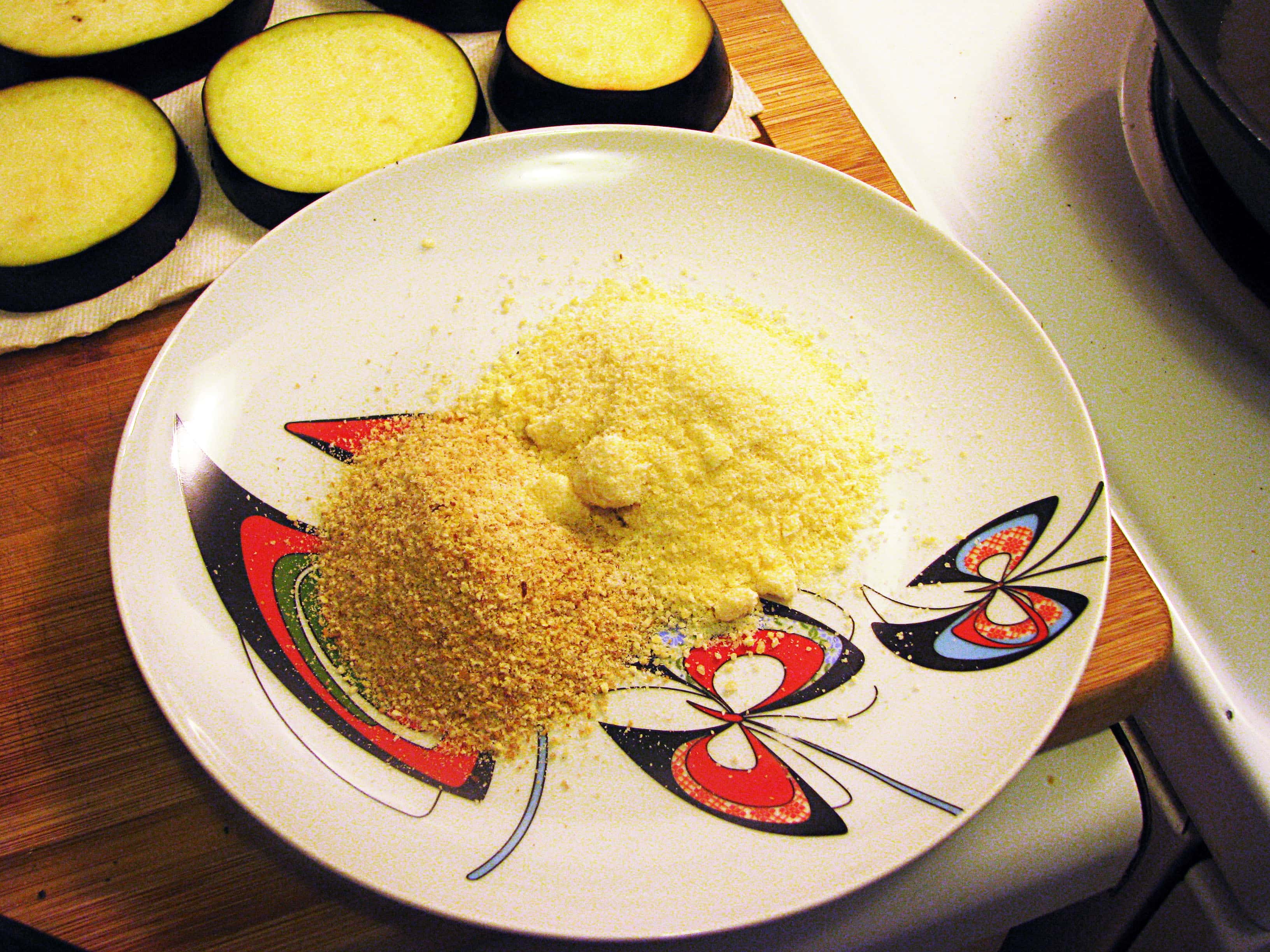 Now, let's get to dredging and frying!  If you're making this for a group you might want to consider using two pans to fry to save time.

Dip each piece of eggplant in the egg/milk mixture. 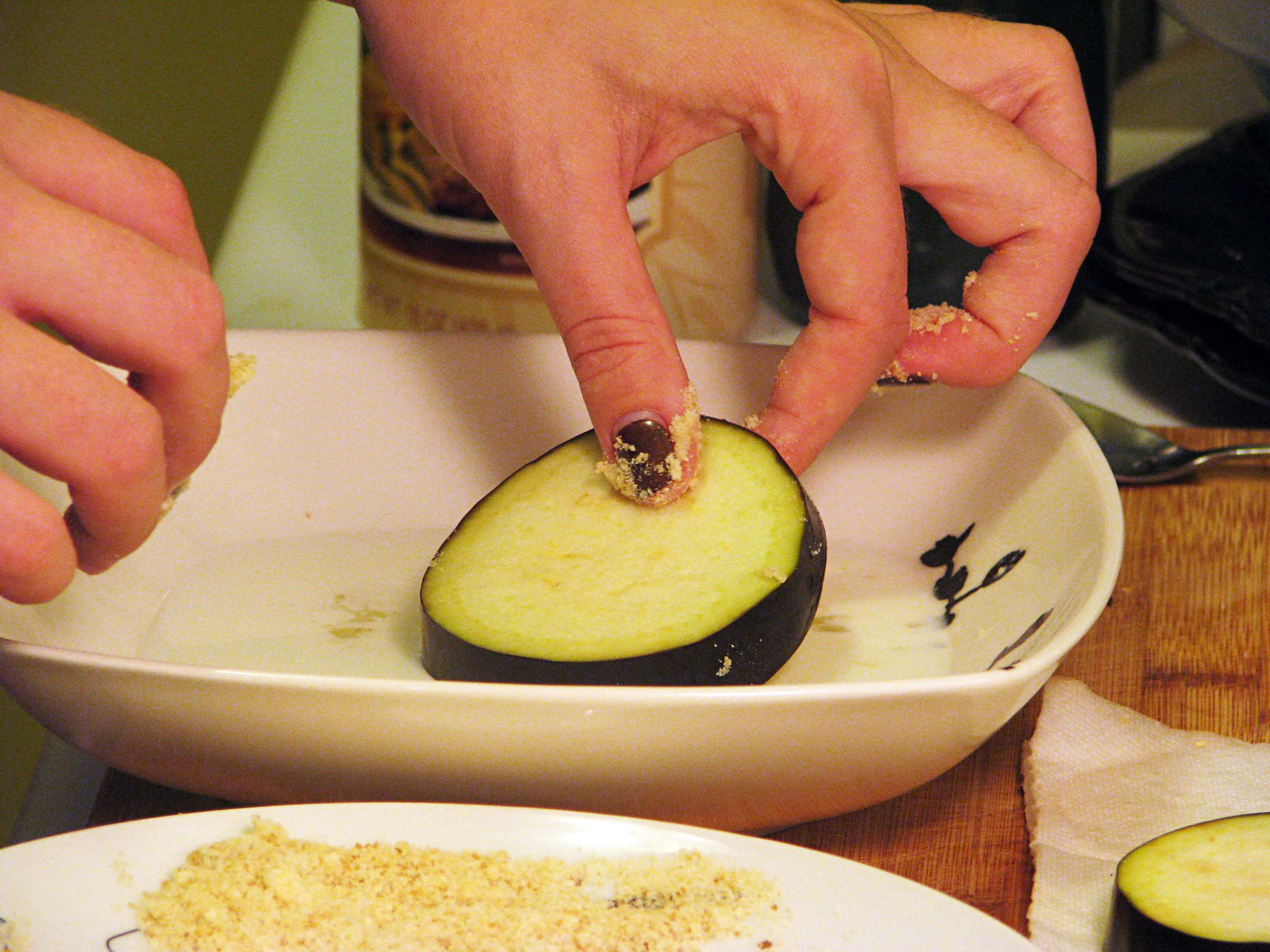 Then dip it into the bread crumb mixture, pressing both sides to get a nice coating. 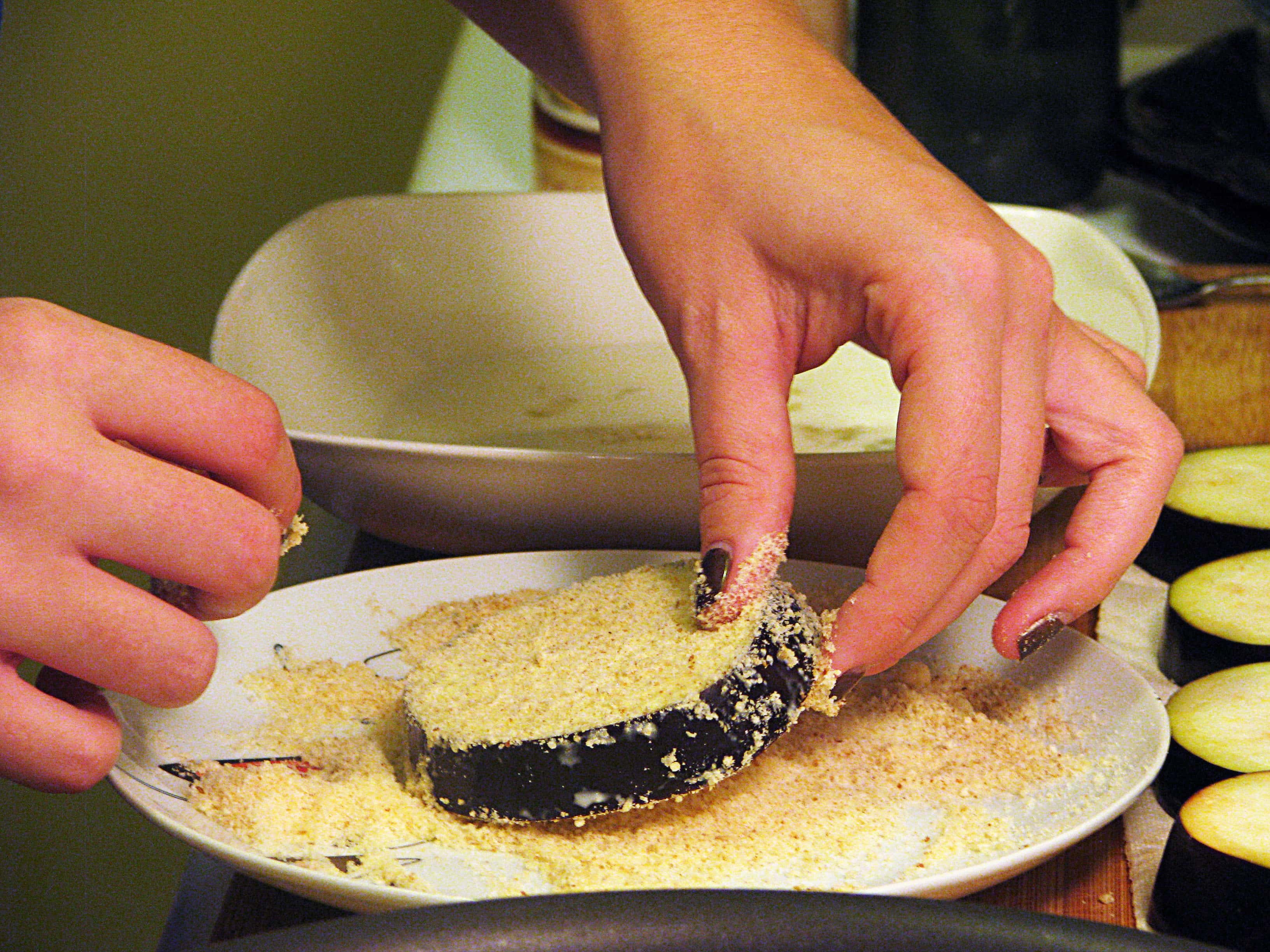 Then drop the eggplant in the hot oil! 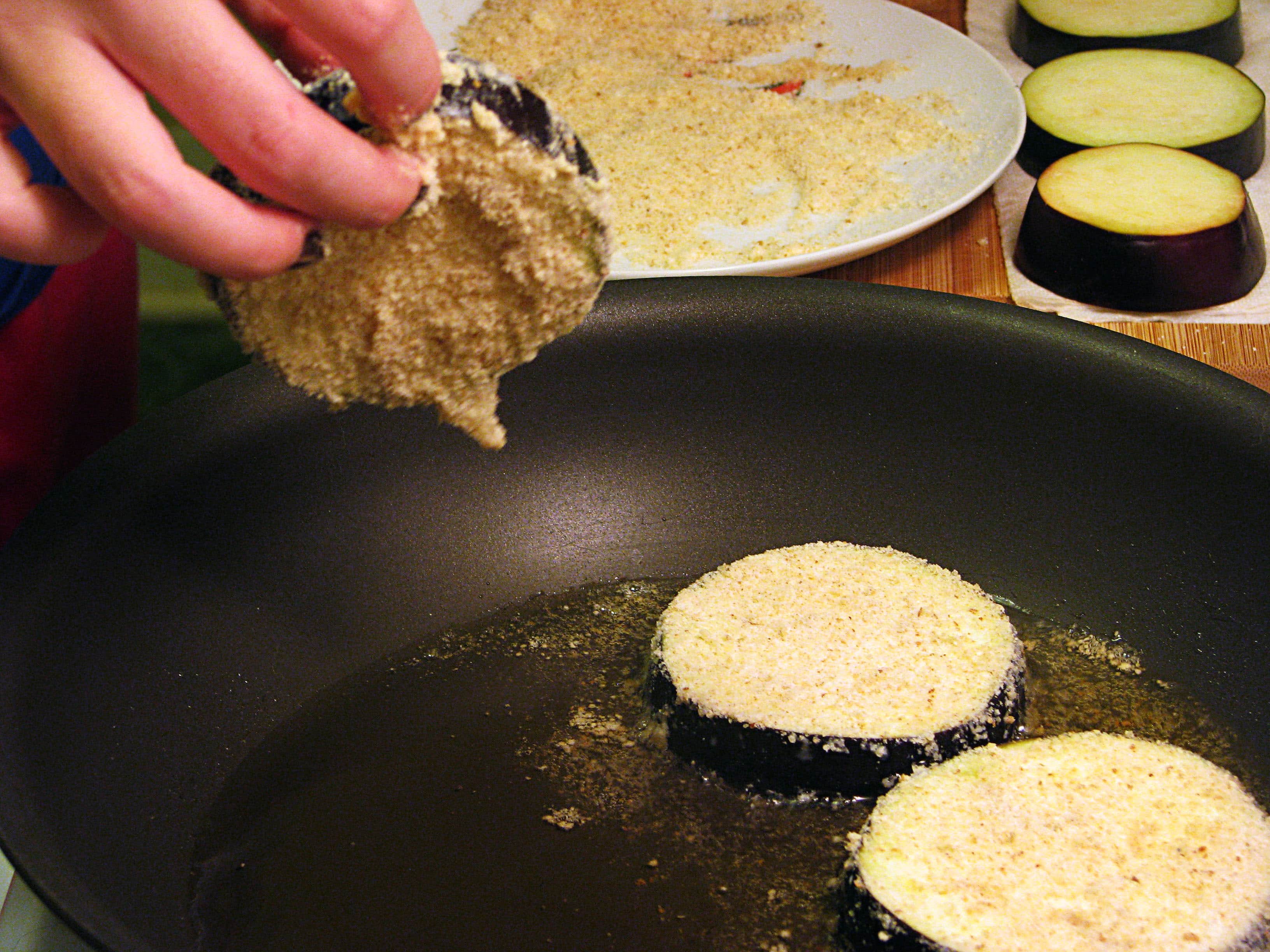 I should point out that it is MUCH easier to make this if you have your dredging plates lined up so that you move the eggplant right into the hot pan - otherwise you'll get raw egg and bread crumbs everywhere! 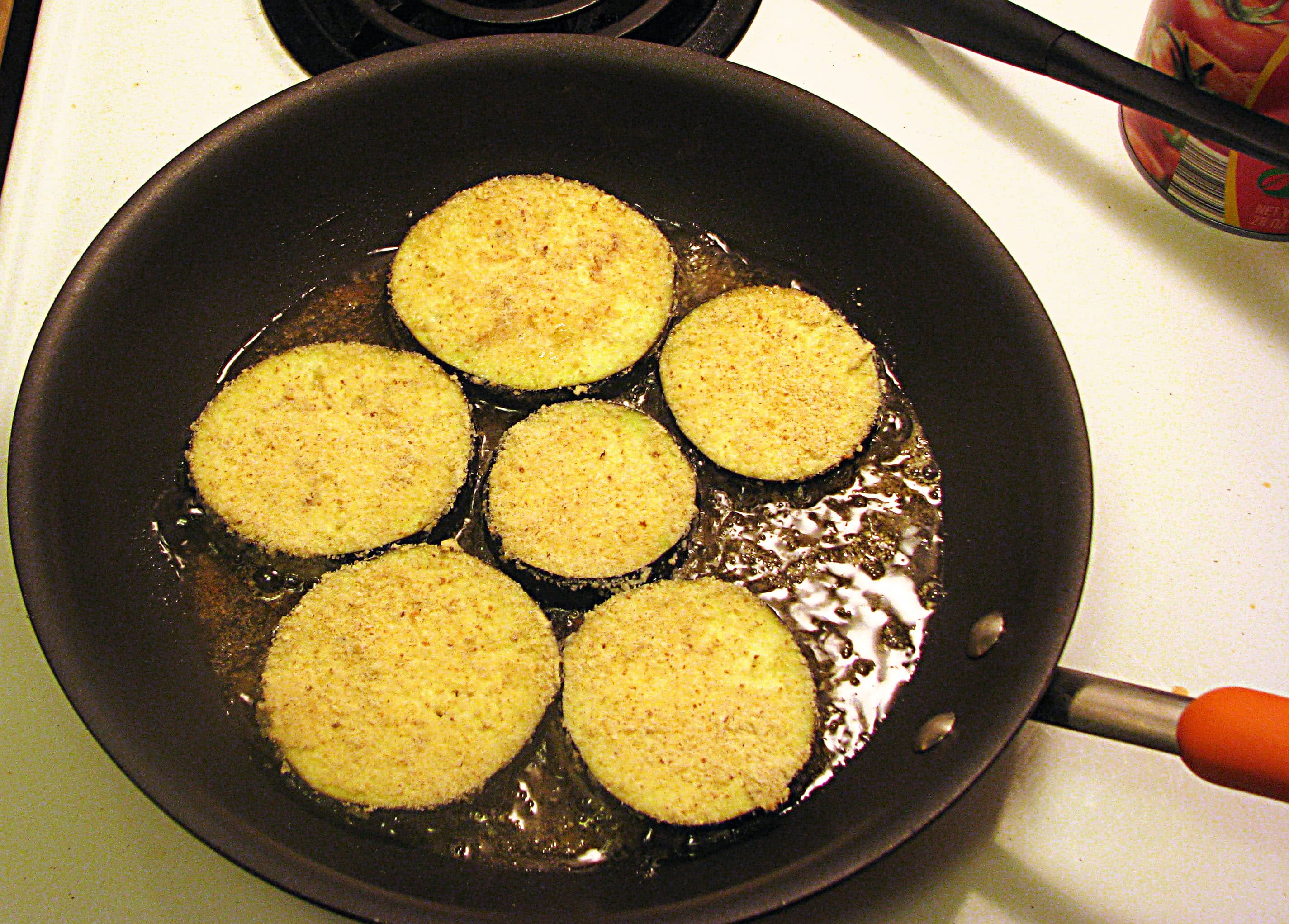 See how the oil is bubbling?  That's what we want.  Usually I turn the oil up just a bit once the eggplant is frying since the cool eggplant will cool the oil down.  Let the eggplant fry for about 5 minutes on each side.  You can grate the cheese during this time or keep breading other batches of eggplant! 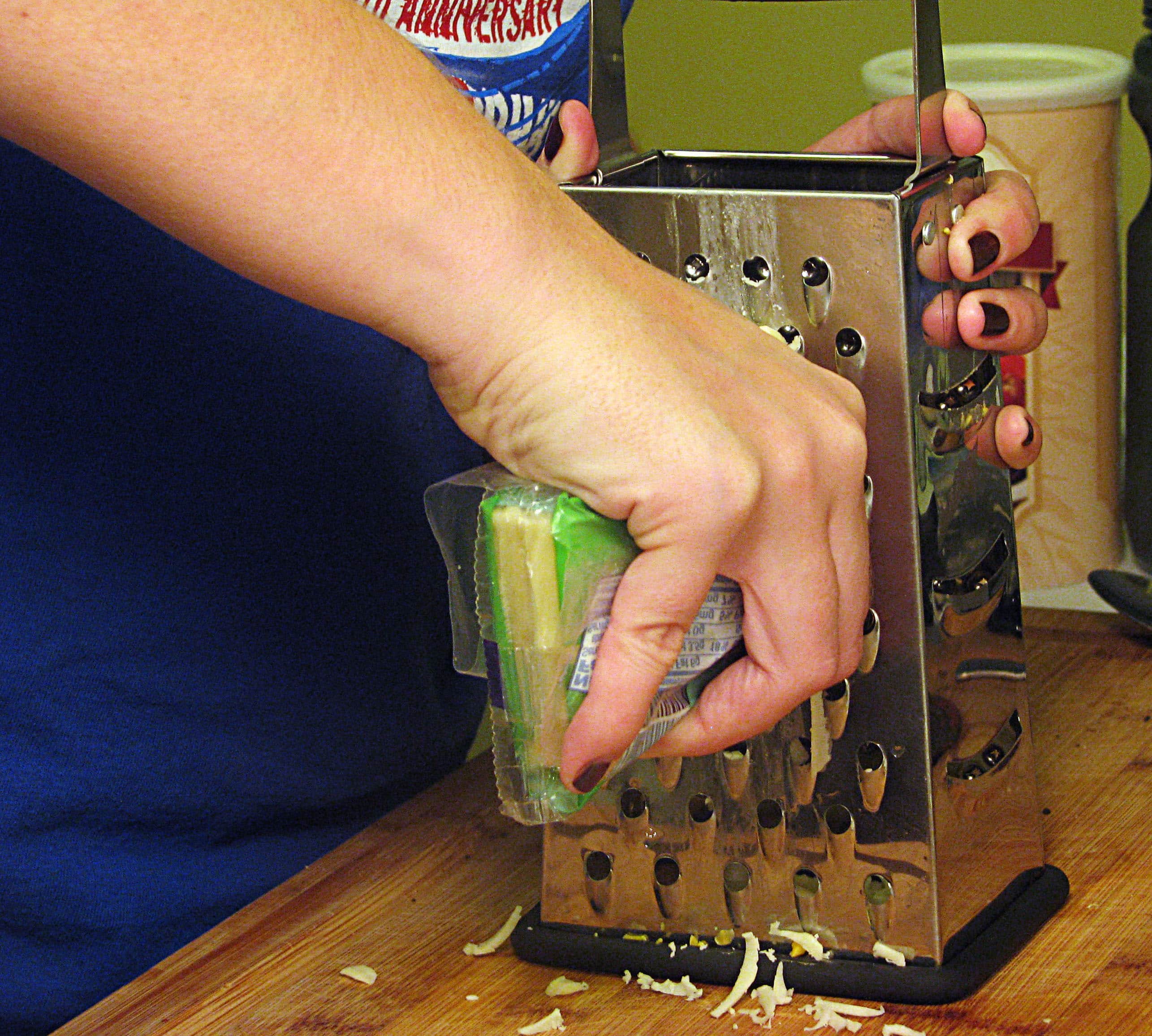 When the eggplant is crispy on side one, gently flip it over using a spatula or tongs - I find a spatula to be easier because tongs can sometimes be a bit rough and break the breading, but use whatever you like! 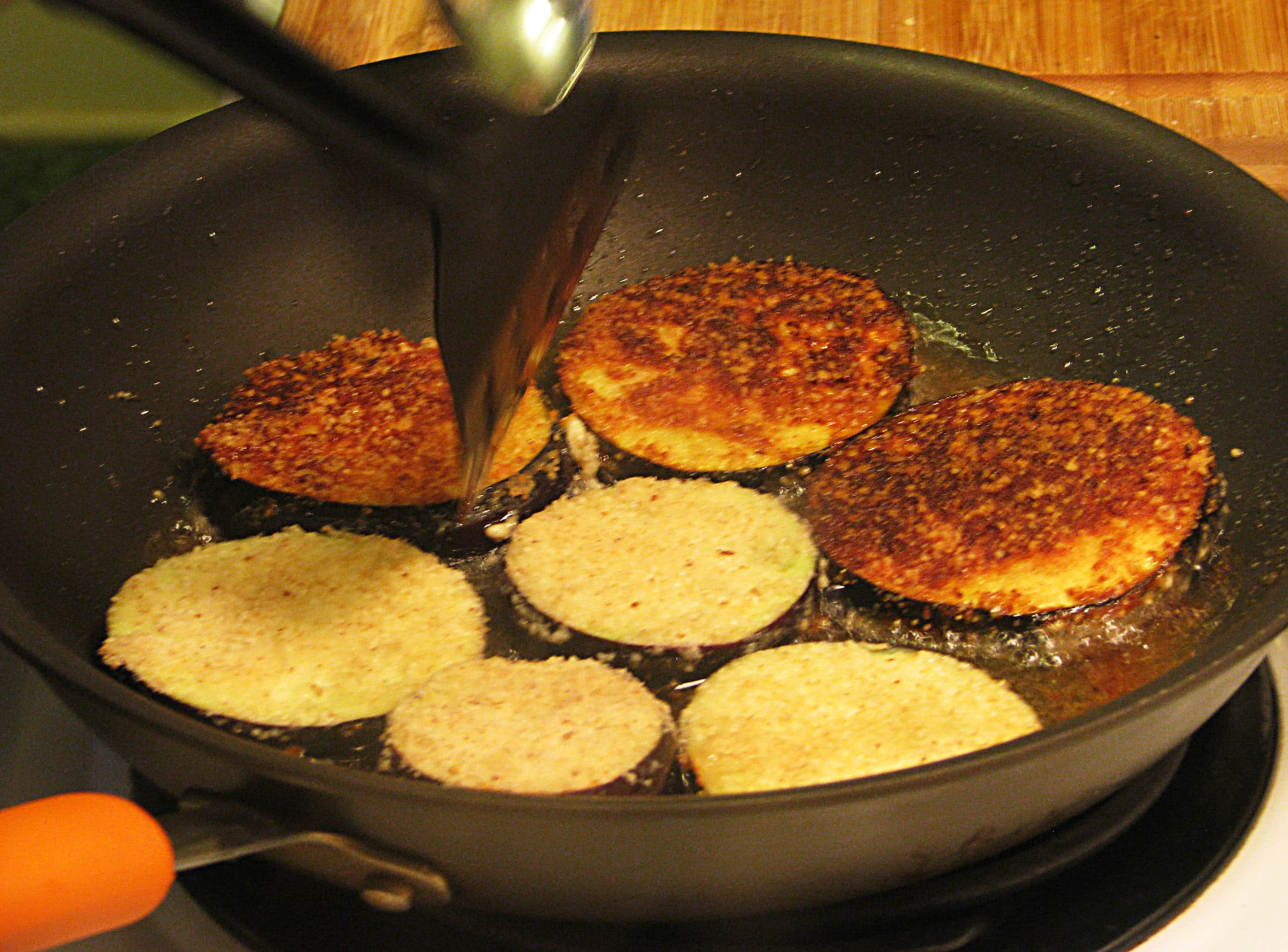 That's just glorious, isn't it?  At this point, turn your broiler to high, check the marinara sauce, and let the eggplant fry for 2-4 more minutes until the second side is browned.

Then, remove the eggplant to a broiler pan or a baking rack set on top of a baking pan - whatever you have! 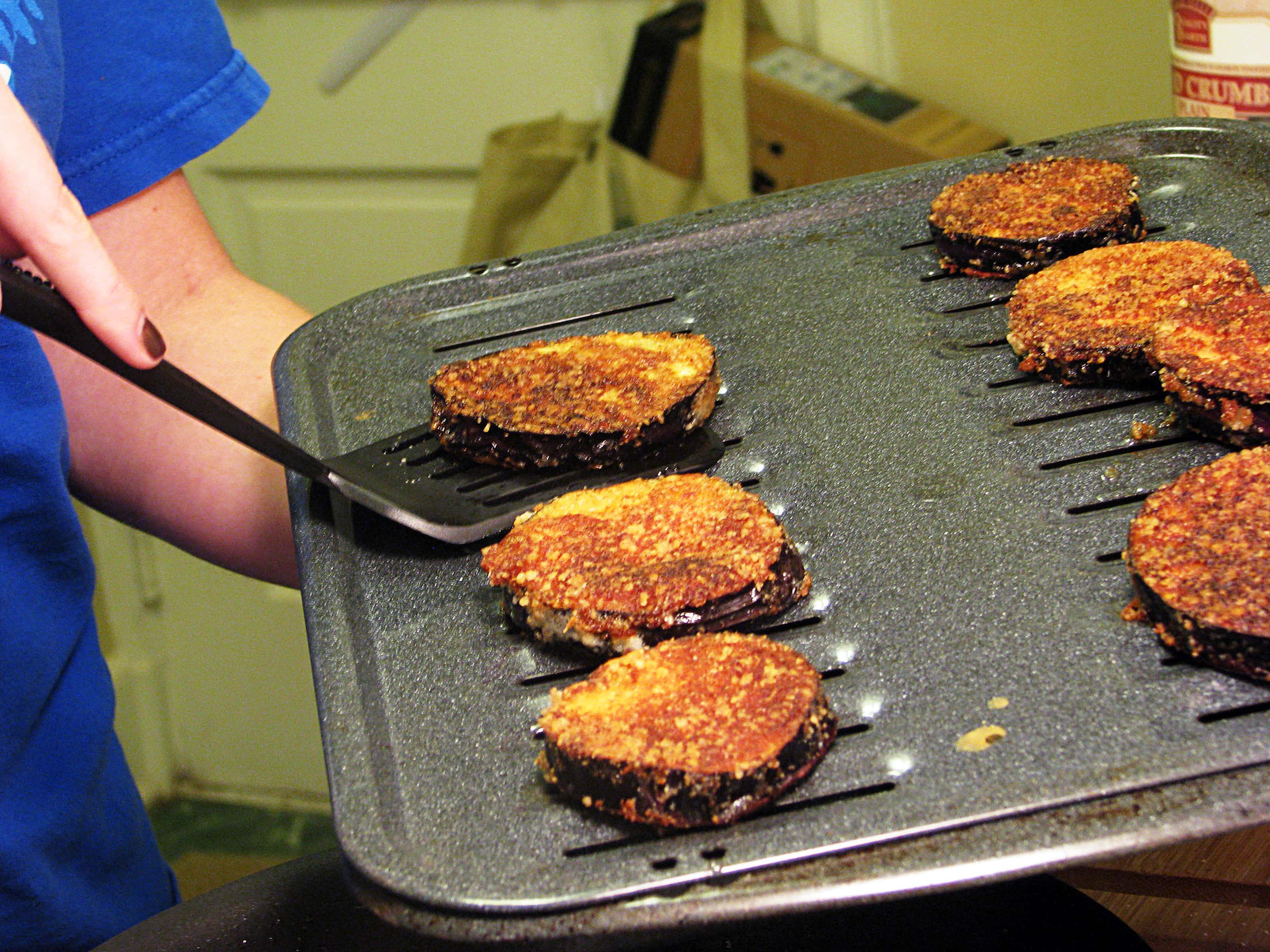 Look how crispy and delicious that is!  Put a little mound of mozzarella cheese on top of each slice, then put the pan in the oven with the broiler on high. 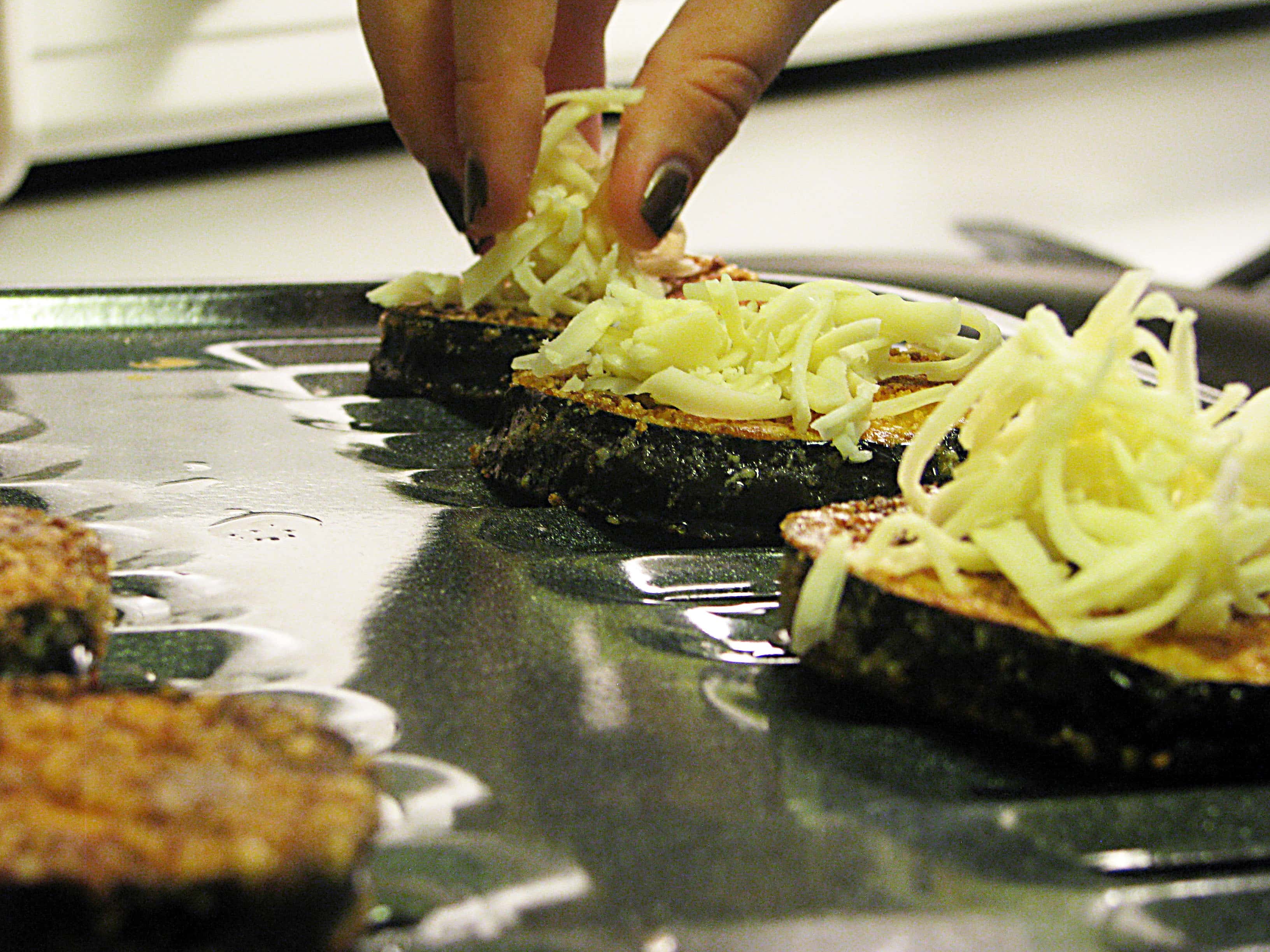 Check the eggplant every 90 seconds - you just want the cheese to turn brown; everything else is already cooked! 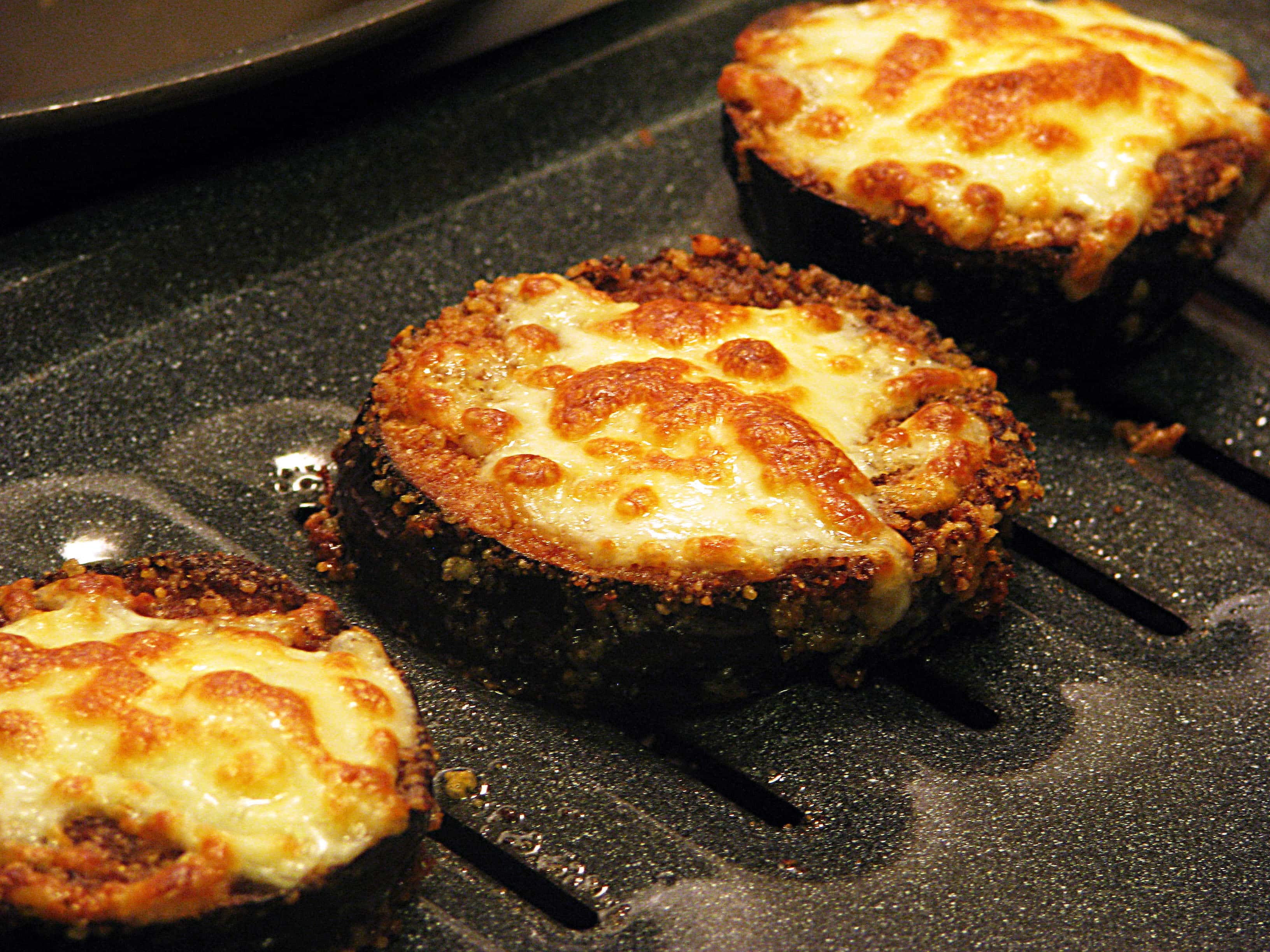 That is BEAUTIFUL.  And perfect.  And crunchy.  And oozy.  You'll love it!

Now, there are two ways to serve this - both are pretty!  I don't use pasta because I think the breaded eggplant is plenty filling with just some bread and a salad on the side - but add some pasta to your plate if you like!

The first way I serve it is to stack up some eggplant slices and drizzle them with marinara sauce. 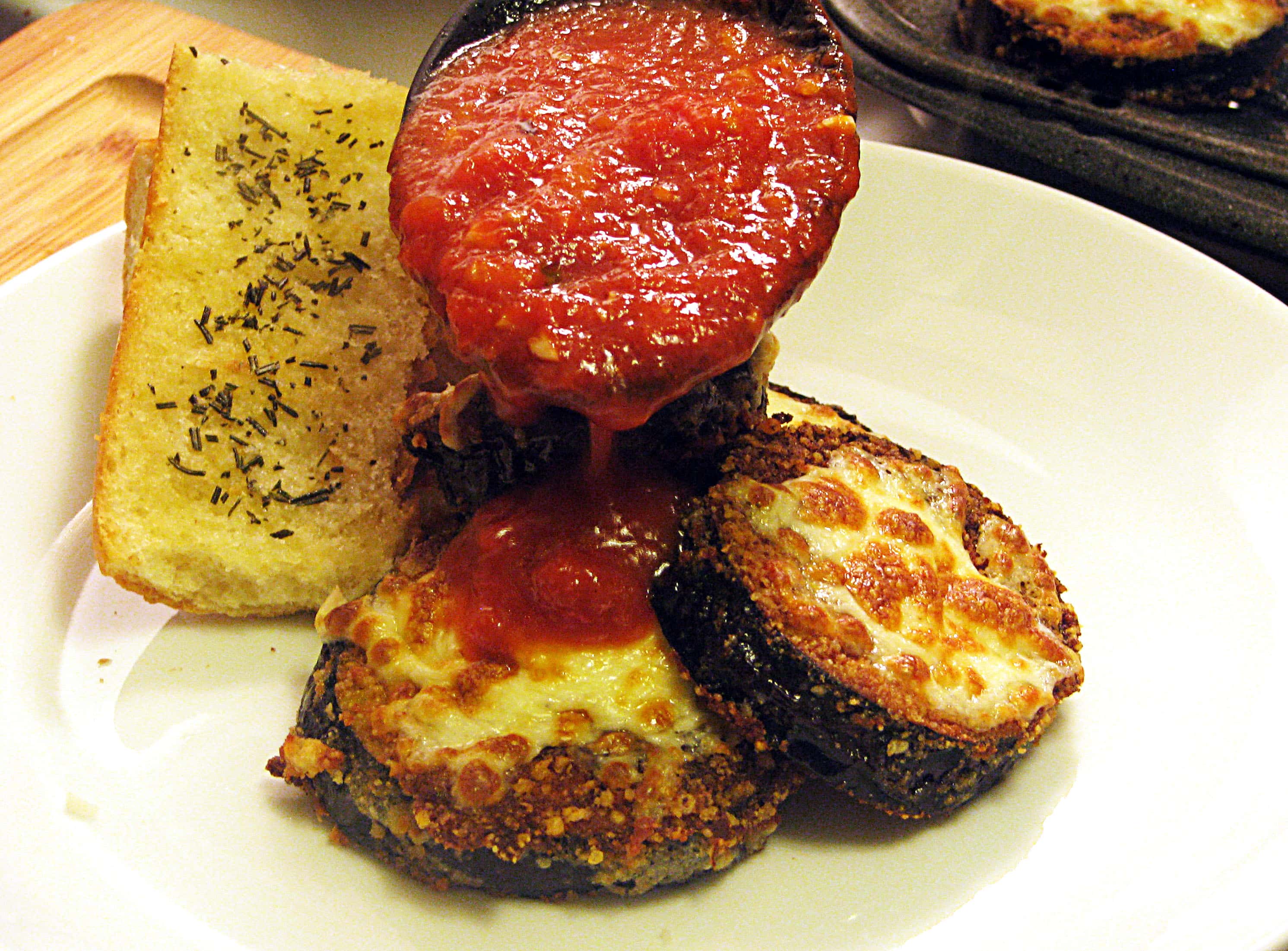 That's just beautiful, and look at the buttery bread! 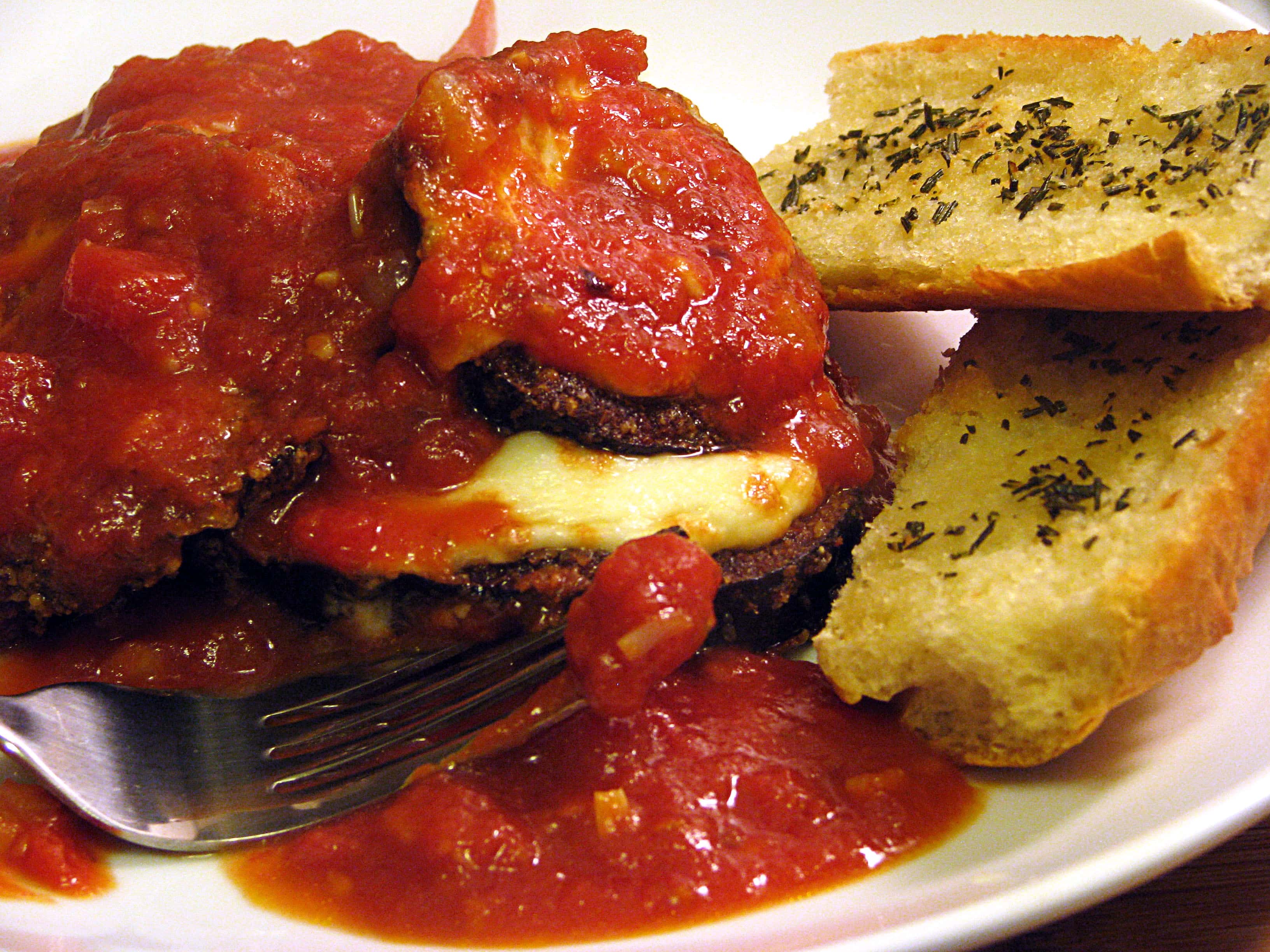 The second way, which is perhaps prettier but not as even with sauce distribution, is to put the sauce on the plate FIRST then stack eggplant slices in the center of the plate and put some parsley and coarse salt on the whole thing. 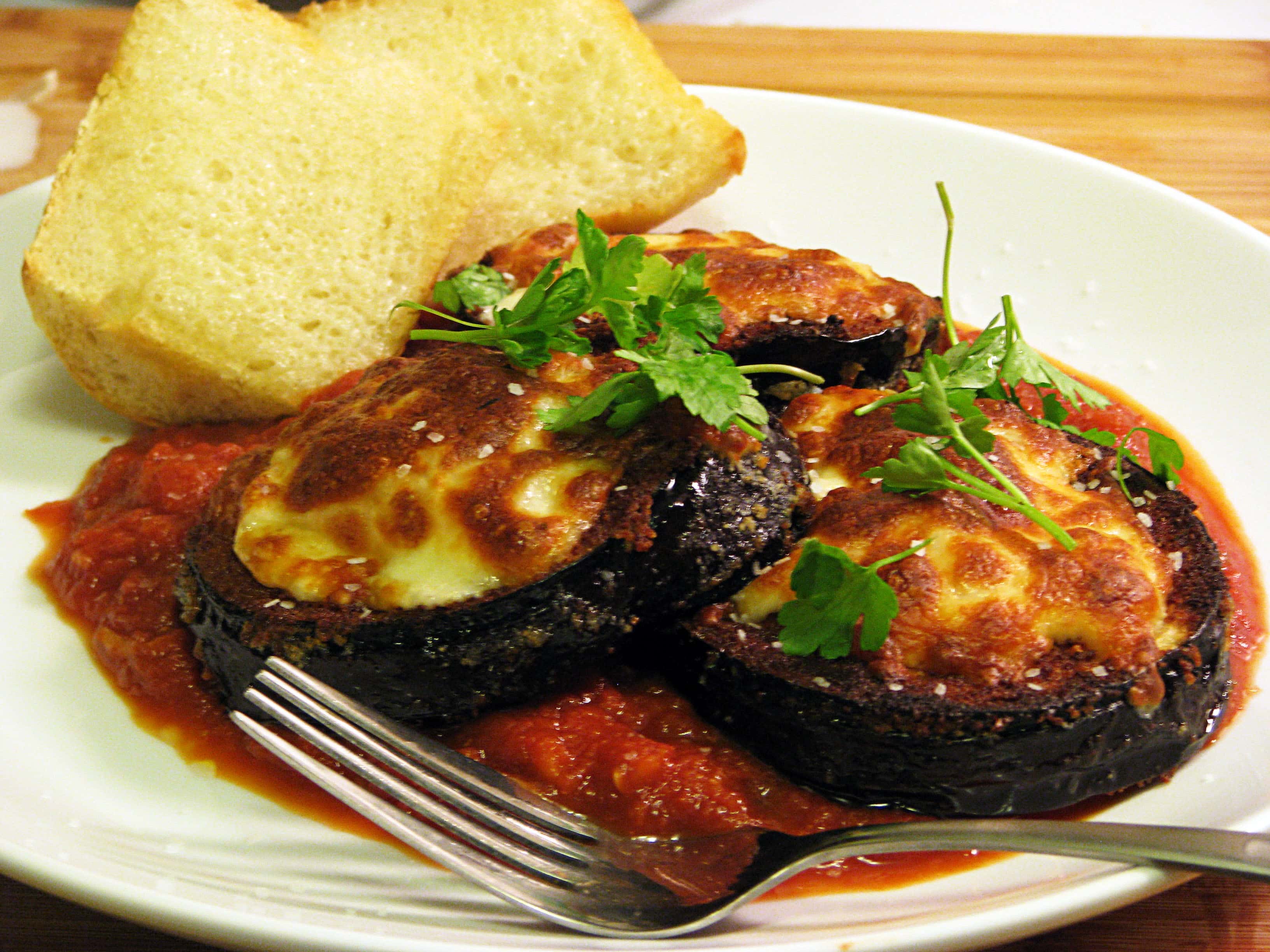 Yep, that's sexy food.  No matter how you serve this it'll be delicious every time - the same method can be used for chicken, too!  Enjoy this one!