Home » Food » The First Thing I Ever Made for Jay 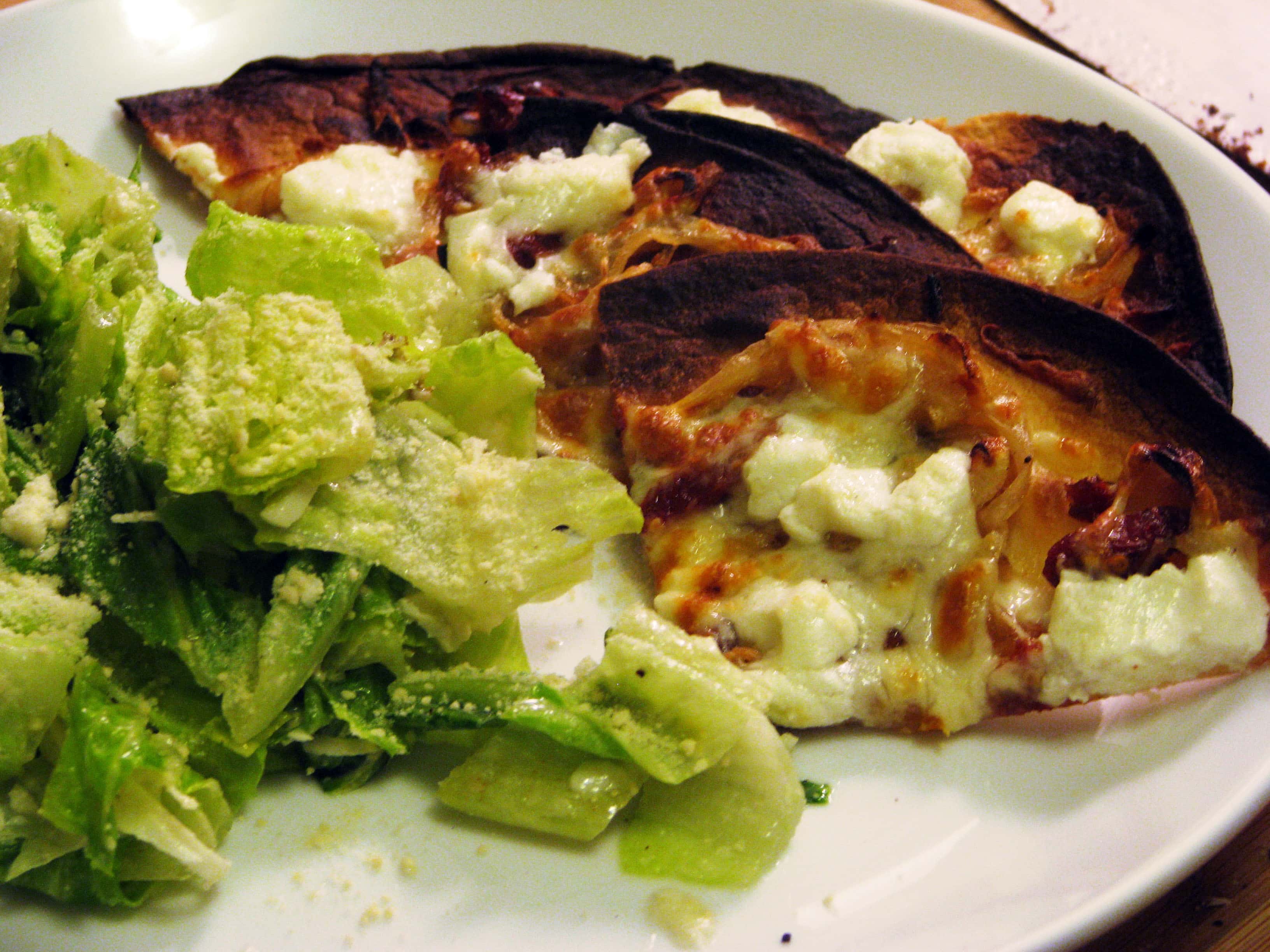 When Jay and I were first dating, he worked at a restaurant.  It was a sad time for me, mainly because he worked Thursday, Friday, and Saturday nights until 12 or 1, so if I did get to see him it was super late at night, he was starving and exhausted, and I'd usually consumed too much boxed wine to be of any use to anyone.

Except for that, when I drink, I think I'm a FABULOUS cook.  That's why I have this blog!

Not really.   On night, though, we were both tired and Jay was starving and I was trying to impress him to make him like me, so I made some flatbread pizzas I'd copied from a work trip - the Gaylord Texan in Grapevine, TX has these fabulous flatbread appetizers, and my favorite one had a combination of goat cheese, sundried tomatoes, and caramelized onions.  Fabulous!

As with most things I write about, this is more of a method than a recipe.  I almost always make these the same way, but I've switched up the cheese before, added fresh herbs and nuts, and fresh spinach right at the end is particularly delicious.  In general, though, here's what I use for these flatbreads:

That's it!  The caramelization of the onions takes awhile, but it's very easy and could be done a few days in advance - they're wonderfully sweet and a great "starter onion" for those who don't like onions.
s
For just 2 flatbreads, I use one whole onion.  It cooks way down, so you'll need lots more than you think! 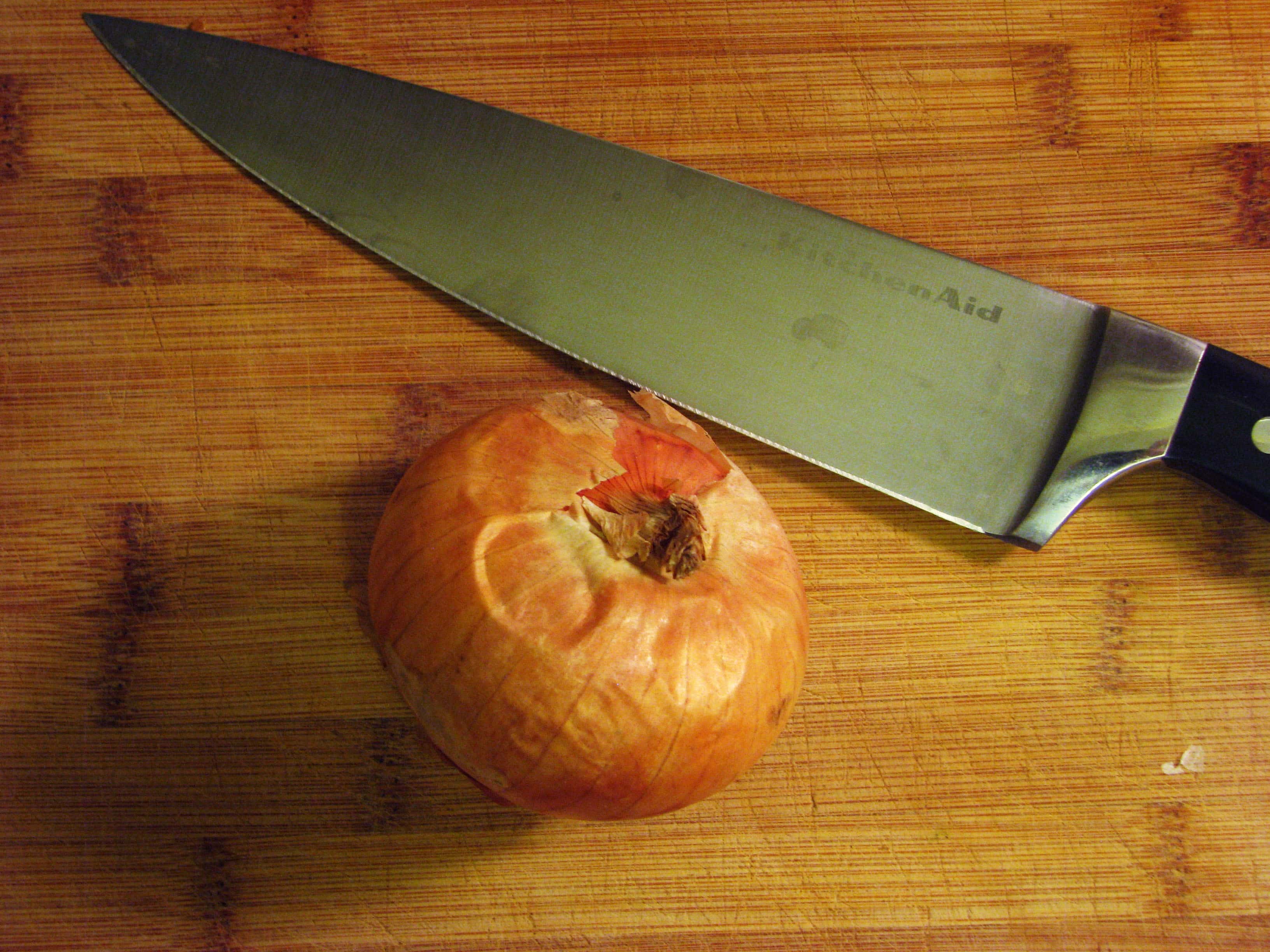 Peel the onion, cut it in half, and slice it thinly. 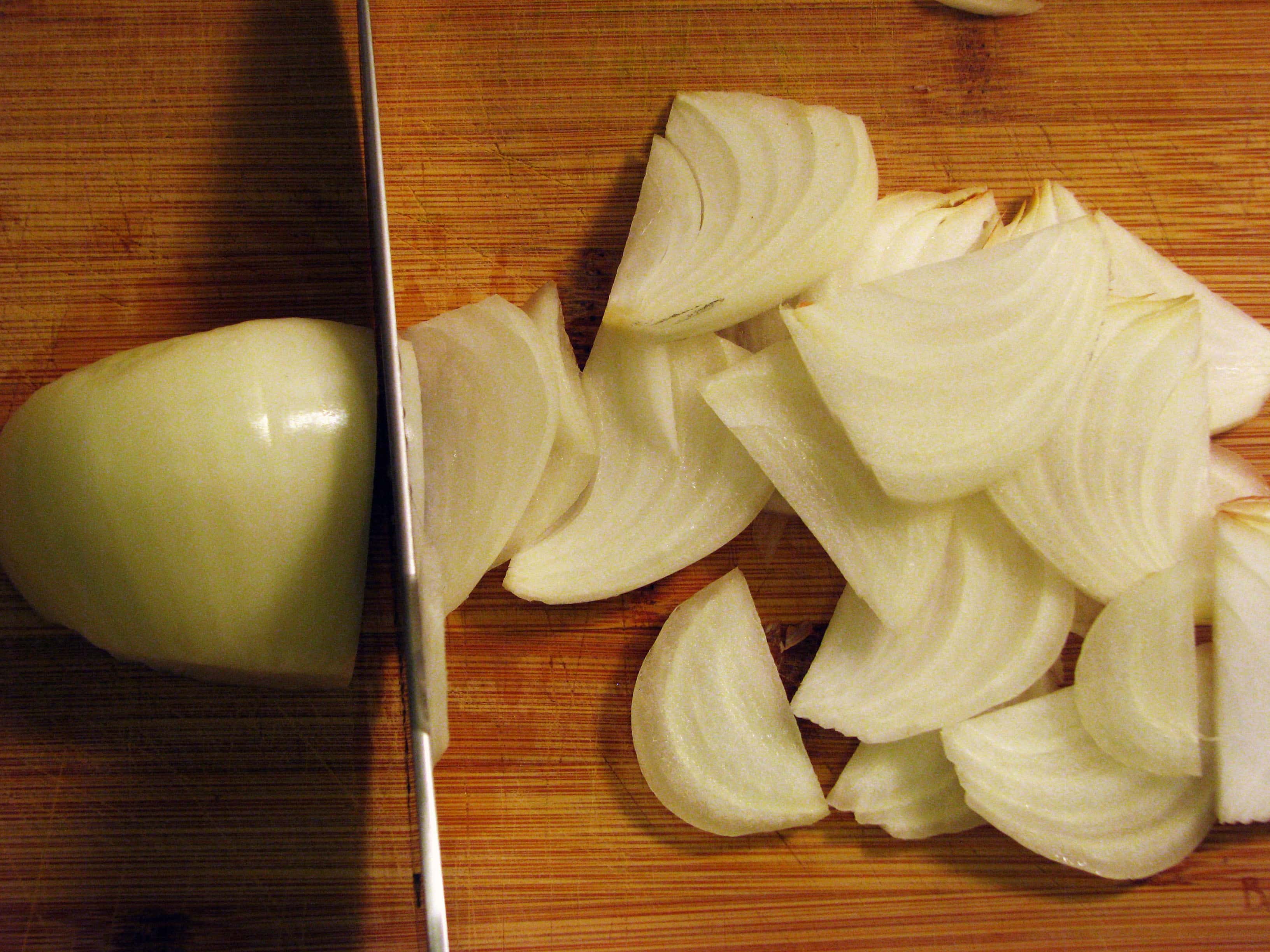 Then, put the onion in a skillet over low heat with a sprinkle of salt, a drizzle of olive oil, and crushed red pepper - as much as you like! 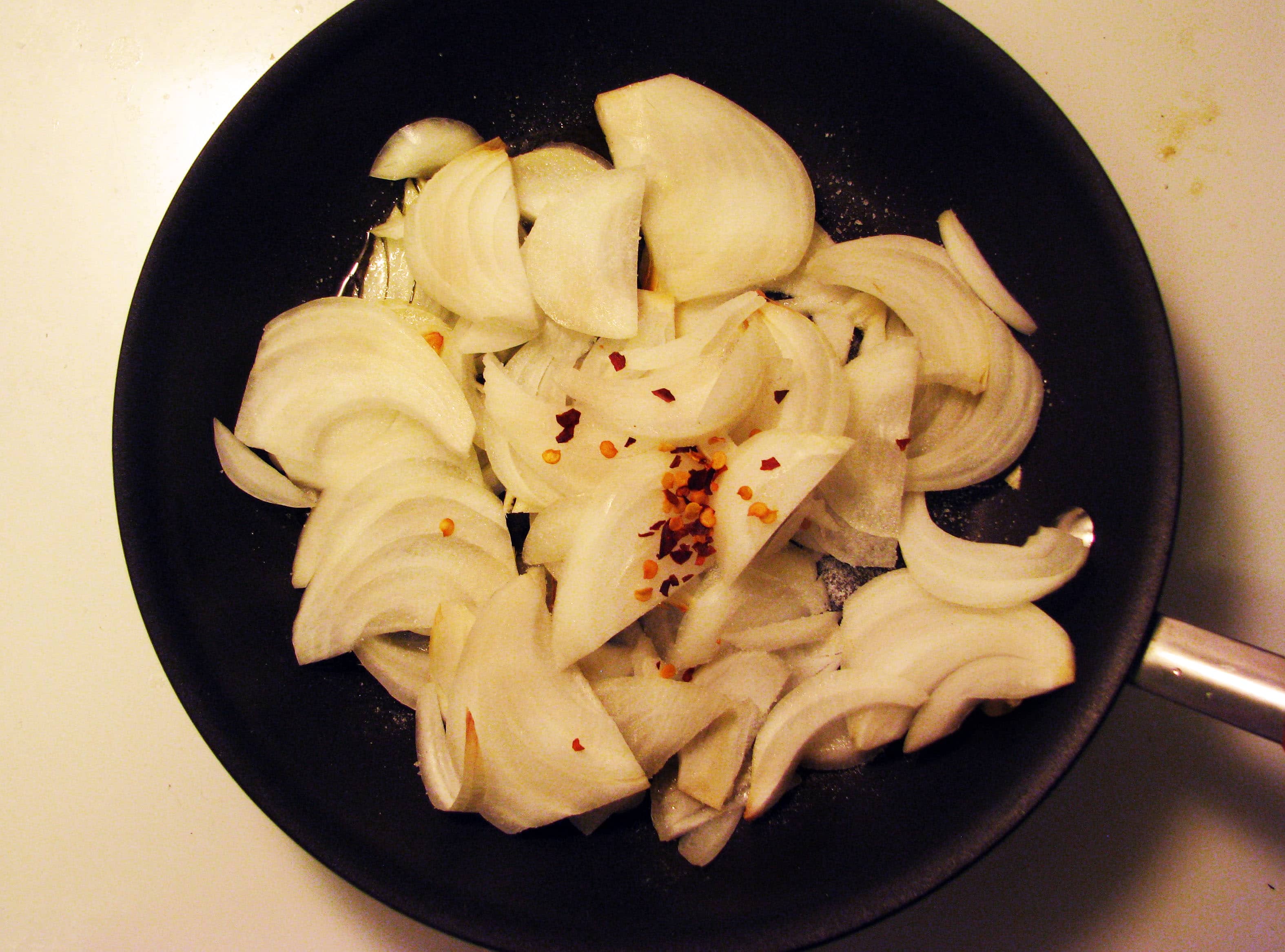 Stir everything around and wander off - this takes awhile!  After about 10 minutes, this is what the onions will look like: 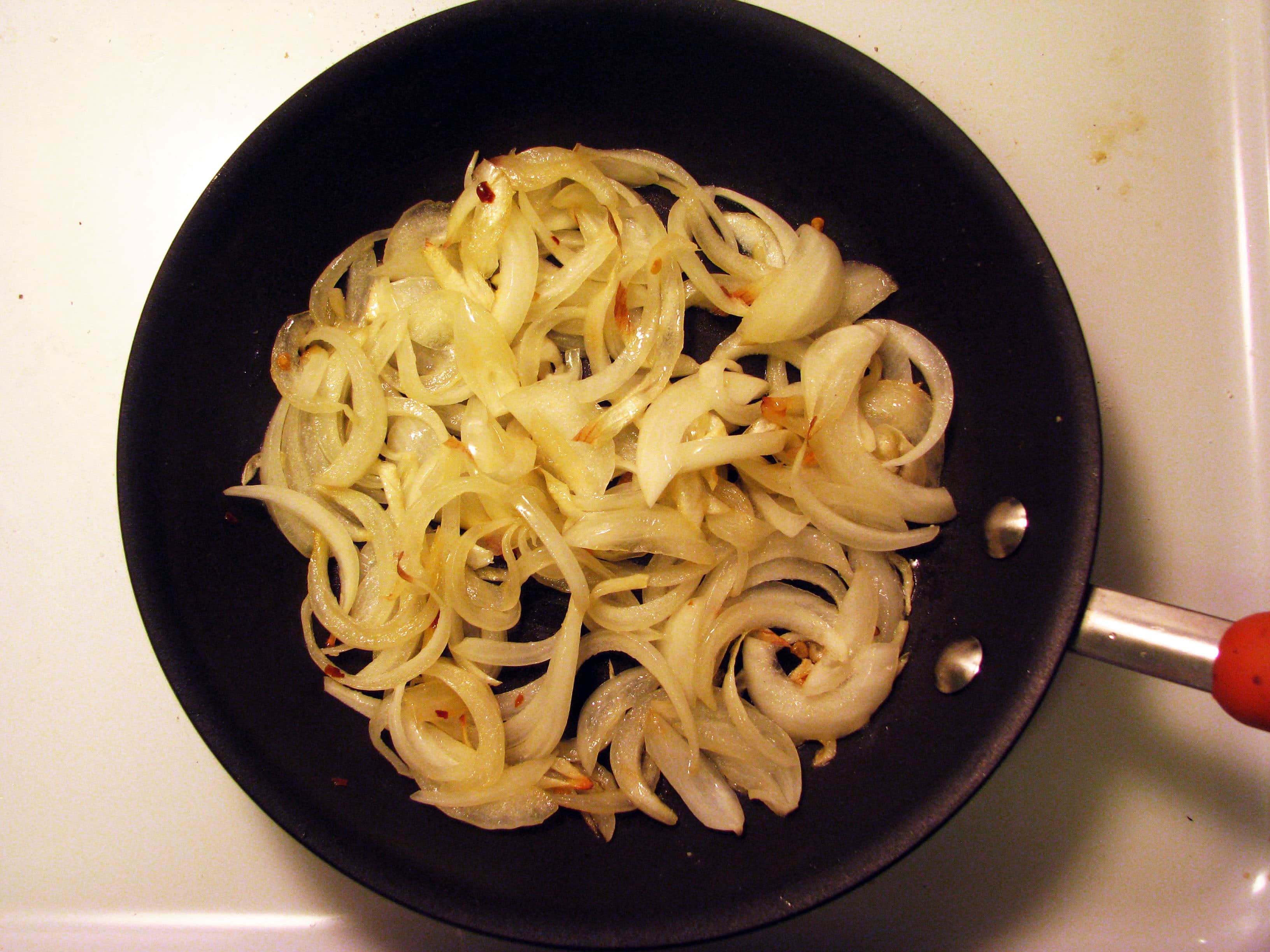 See how they're a little brown on some edges?  That's OK, but if I had more time I'd have them on even LOWER to avoid that.  If the onions start to brown around the edges add some water to keep them soft and avoid any crispy or burnt bits.  Here they are after 30 full minutes: 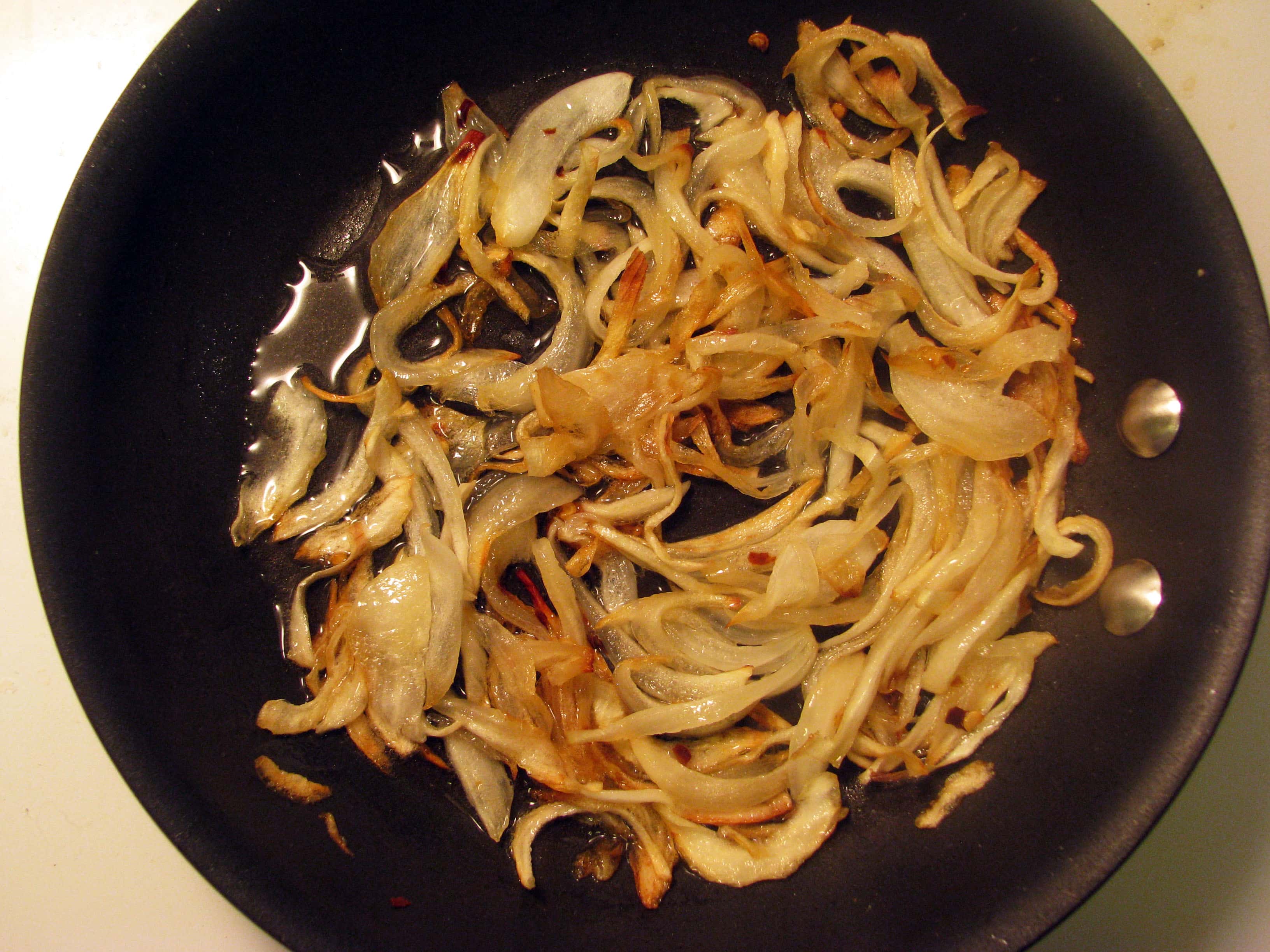 They're getting there!  Here are the onions after 40 minutes, when I got hungry and used them.  No harm in it!  I would have let them cook for 1 hour over even lower heat if I'd had the time, but this is supposed to be a fast and easy meal!  The more water you use, the faster the onions will go - caramelize them to your liking. 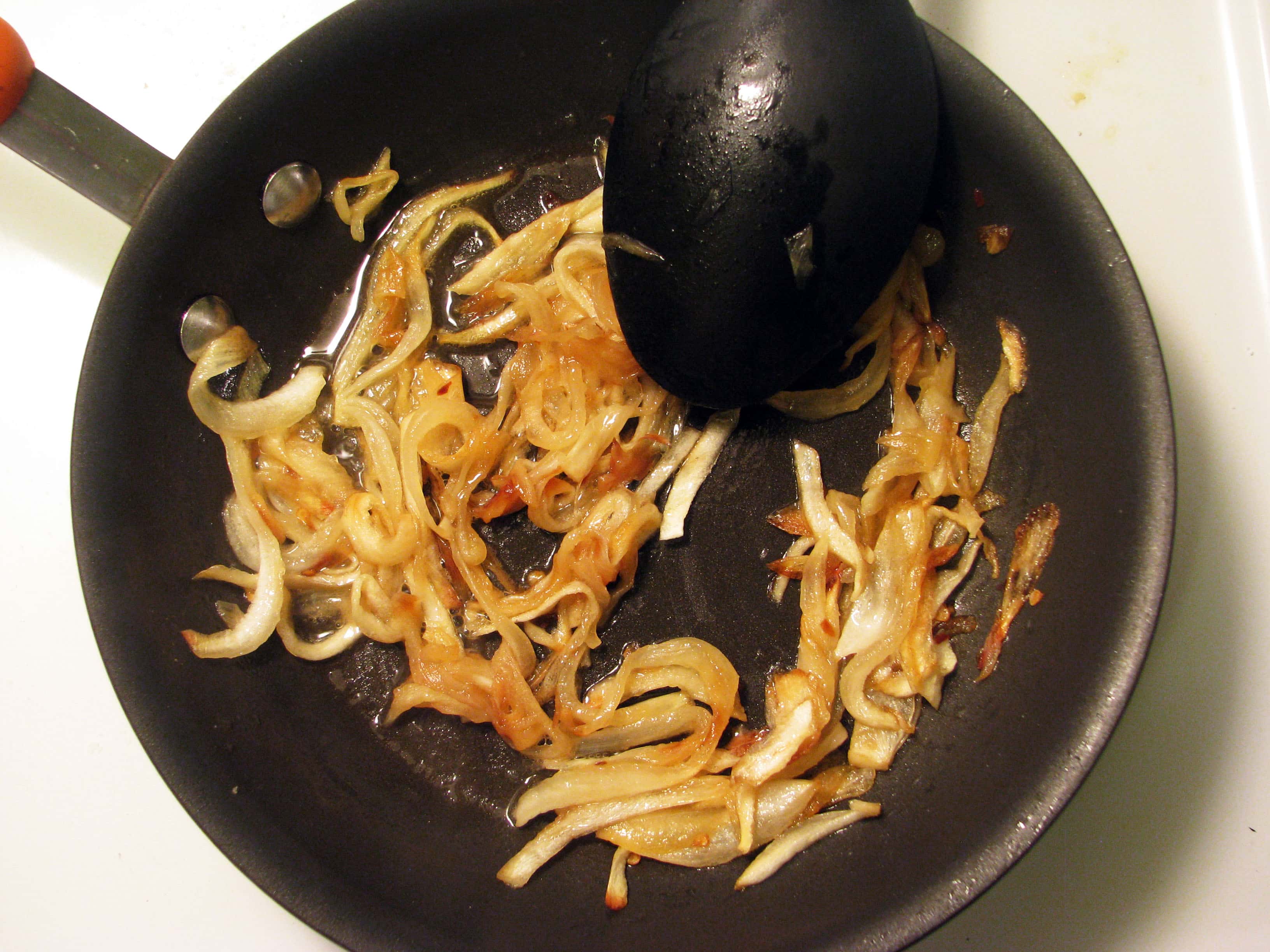 While the onions are cooking, I toast my tortillas and turn the broiler to high. 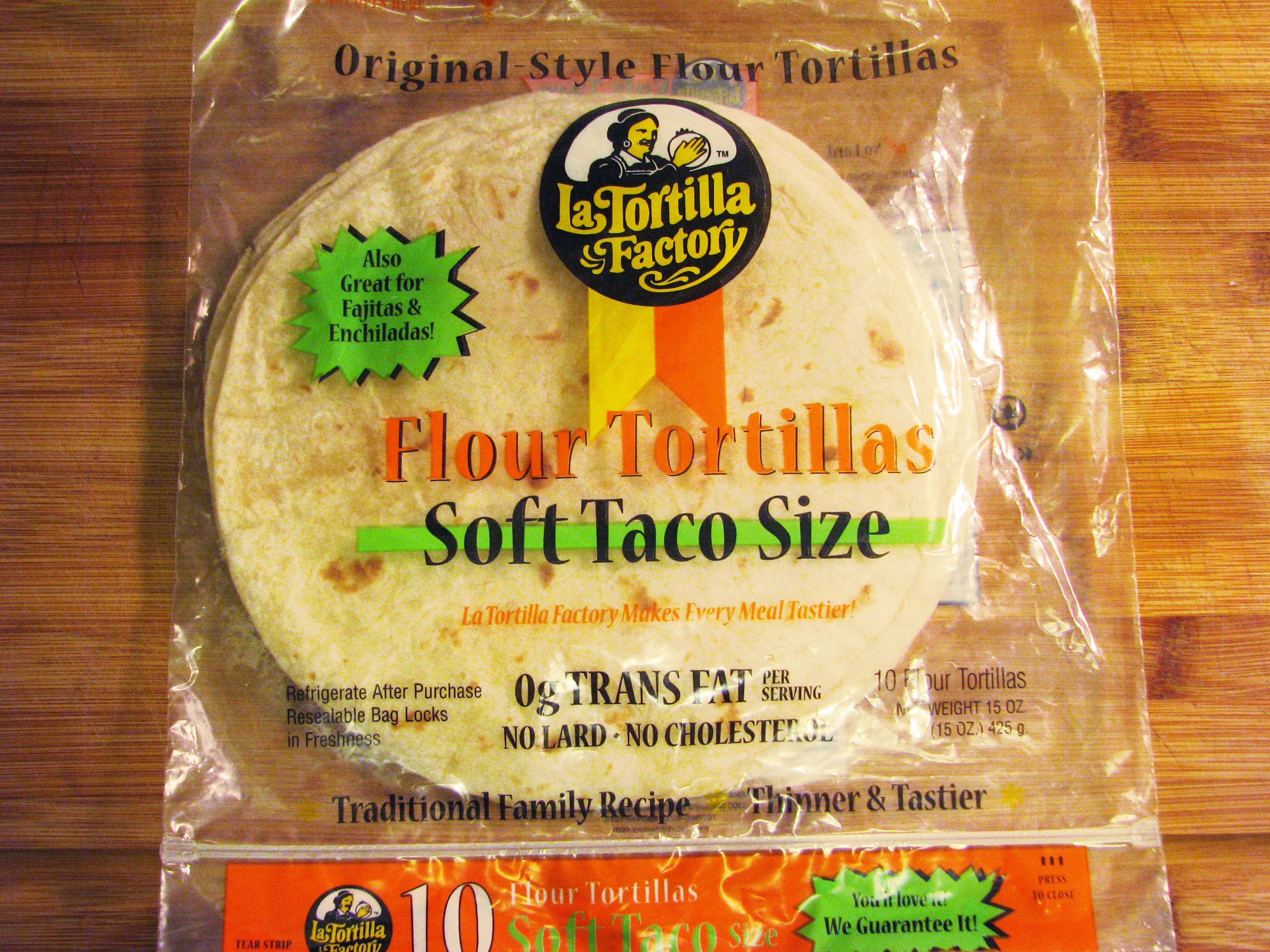 Sometimes, while cooking, it's important to relate shapes to body parts. 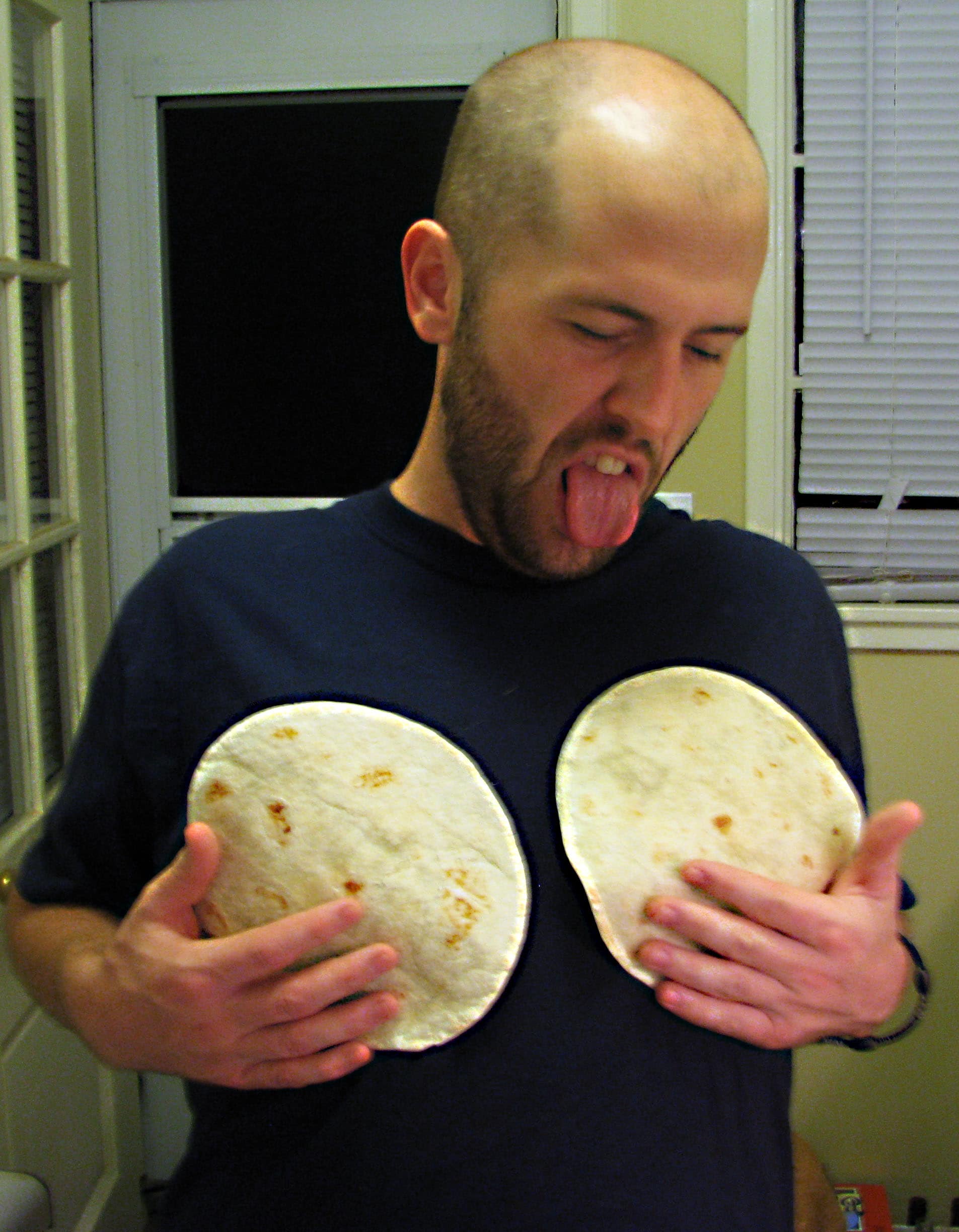 Sigh. Moving on. For the tortillas, I brush each side with olive oil.... 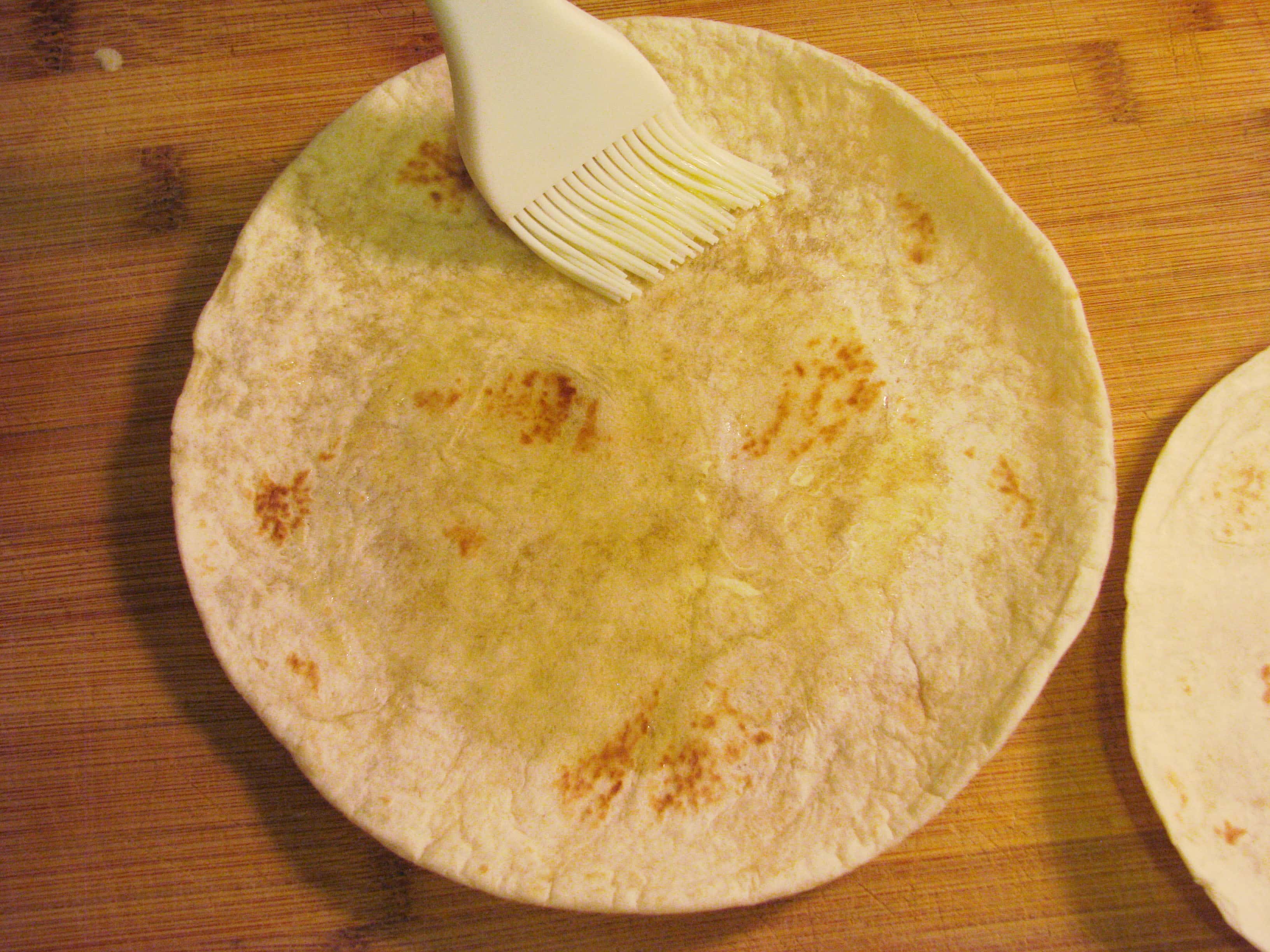 and toast in a separate pan over medium heat for about 3 minutes on each side - just until golden!  We don't want burnt tortillas before they even go in the oven! 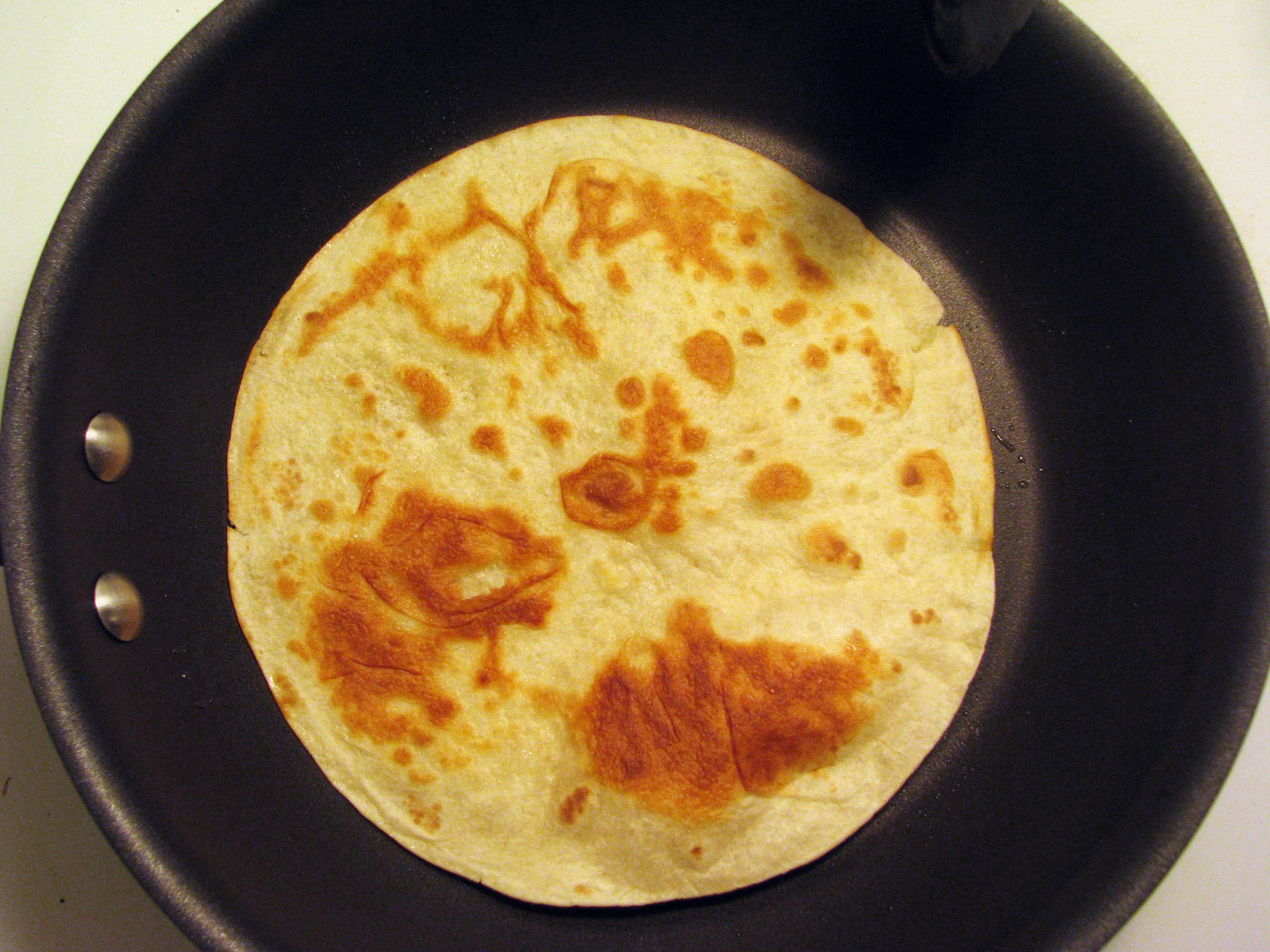 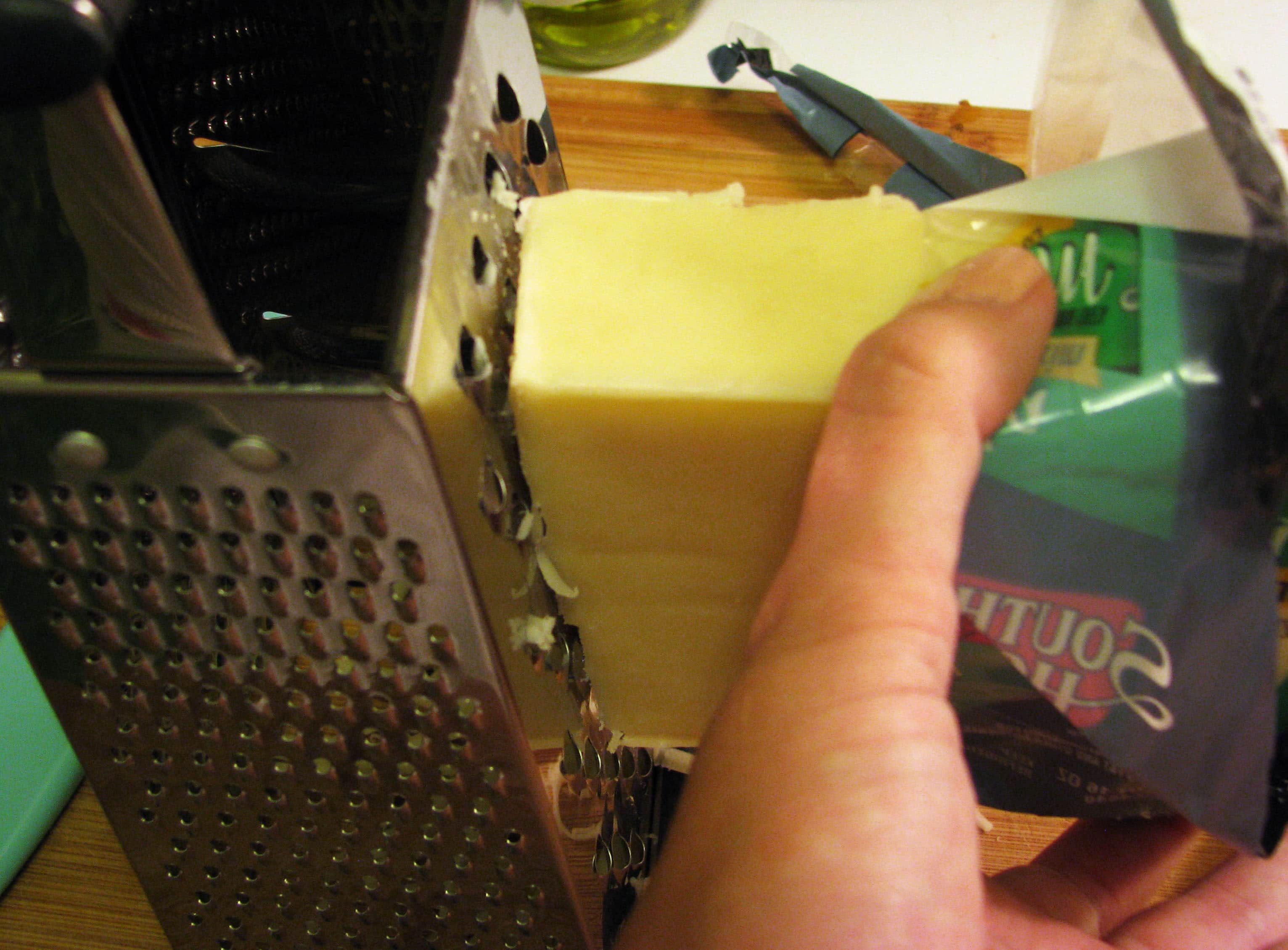 And drain and chop the sundried tomatoes and olives.  I use about 1.5 tablespoons tomatoes for each tortilla and 1 tablespoon olives.  Jay doesn't like olives, so he doesn't get any! 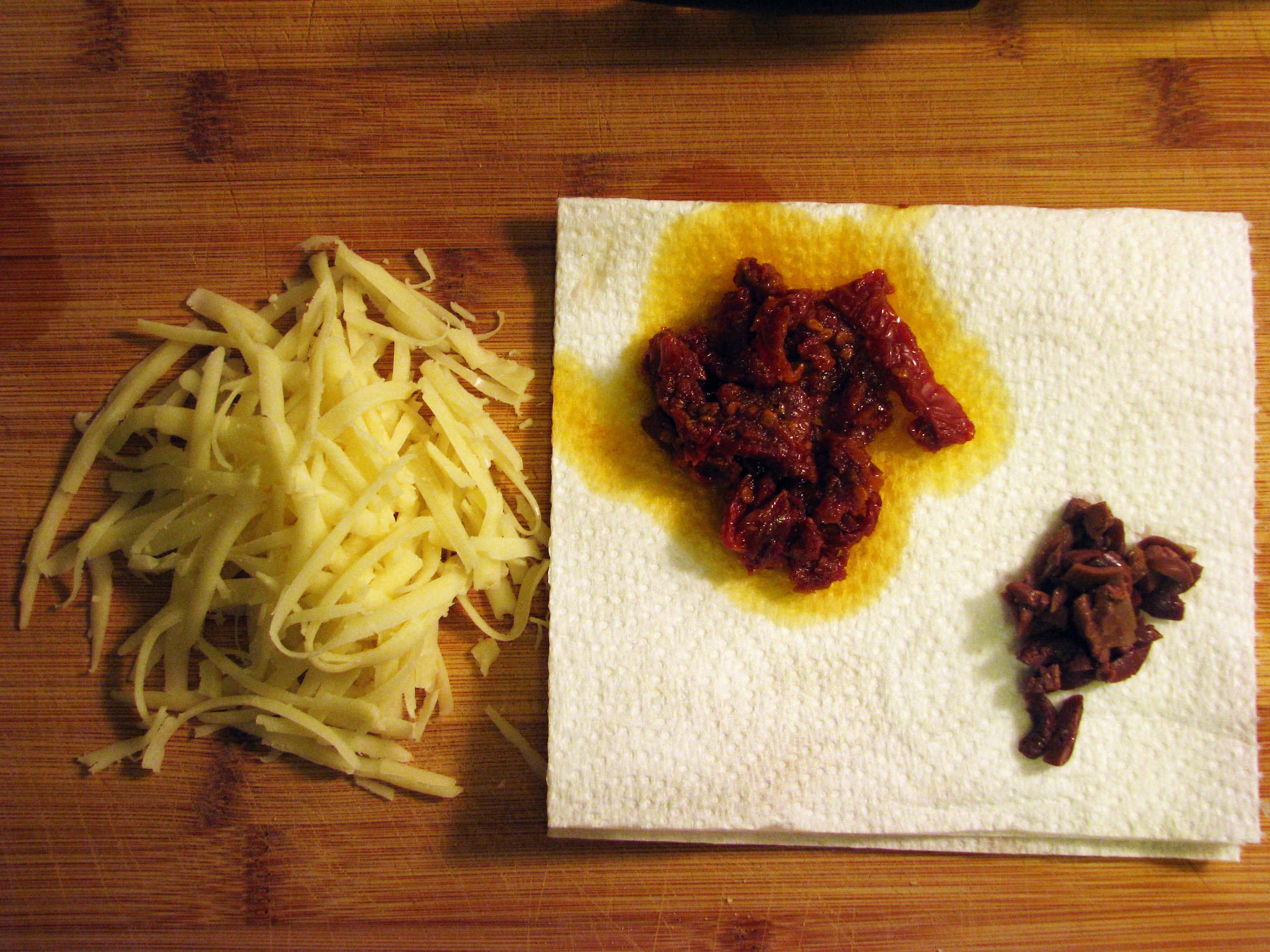 Now it's time to assemble the flatbreads! First, lay the grilled tortillas on a baking sheet and divide the onions evening among them. 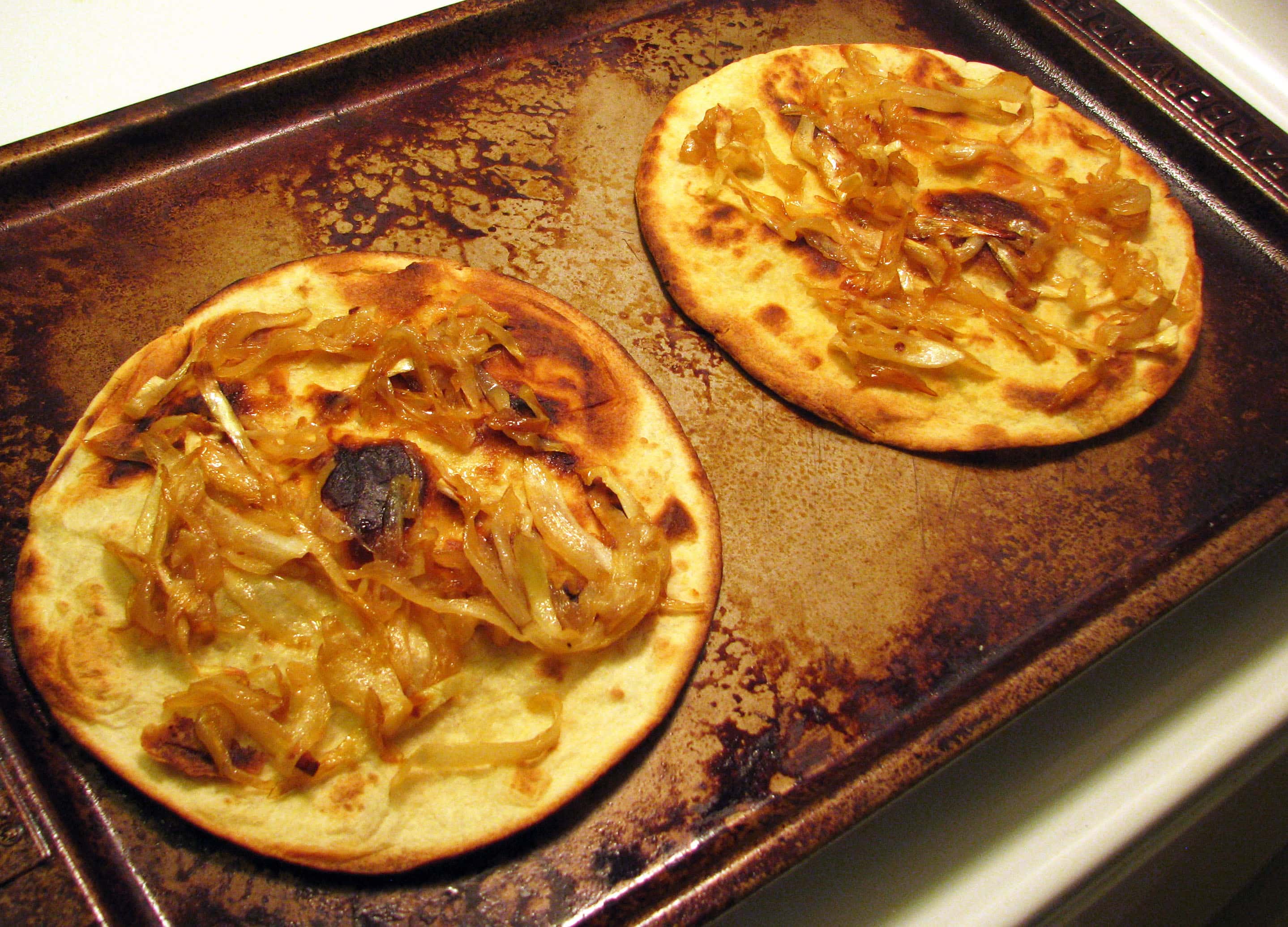 Then add the sundried tomatoes and olives, if you're using them. 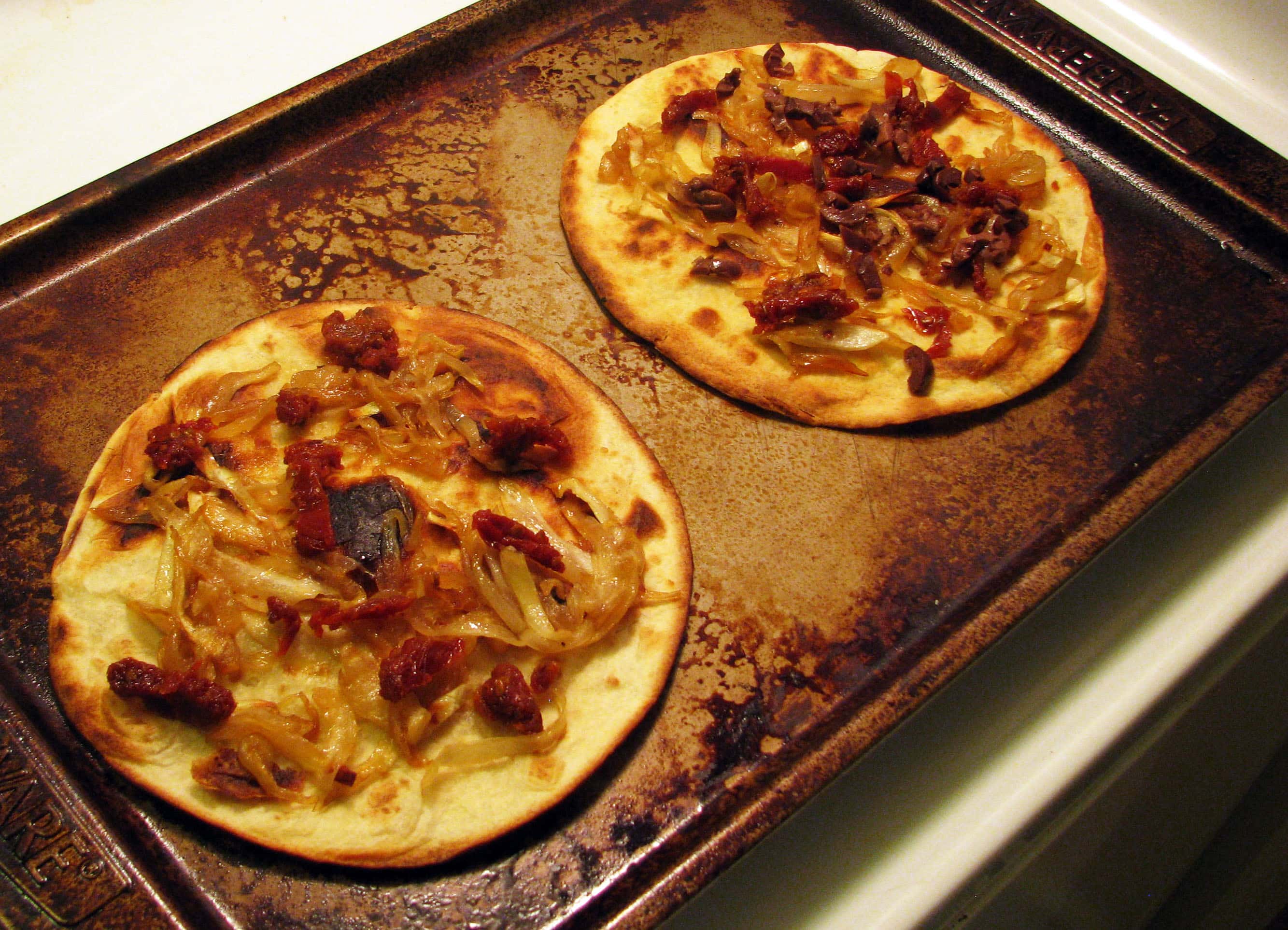 A sprinkle of salt and pepper would be good after this layer too!  Sometimes I do that, sometimes I don't.
s
Now, add the cheese!  About 2 tablespoons each mozzarella and goat cheese per flatbread. 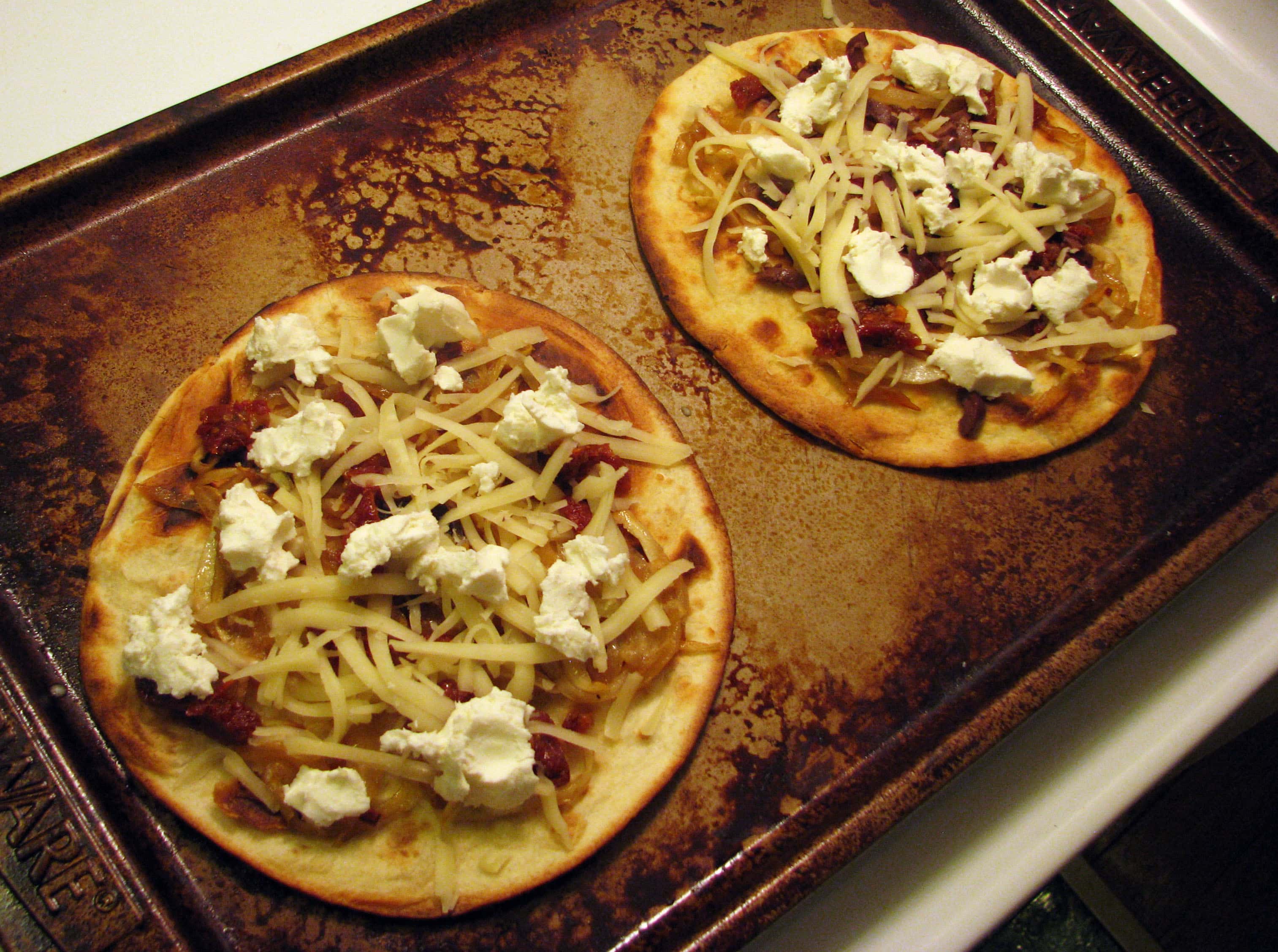 Now stick the pan under the broiler for 3-6 minutes until the cheese is melted and just turning brown.  Try not to let the edges burn, unless you like burnt edges.  Then let them burn. 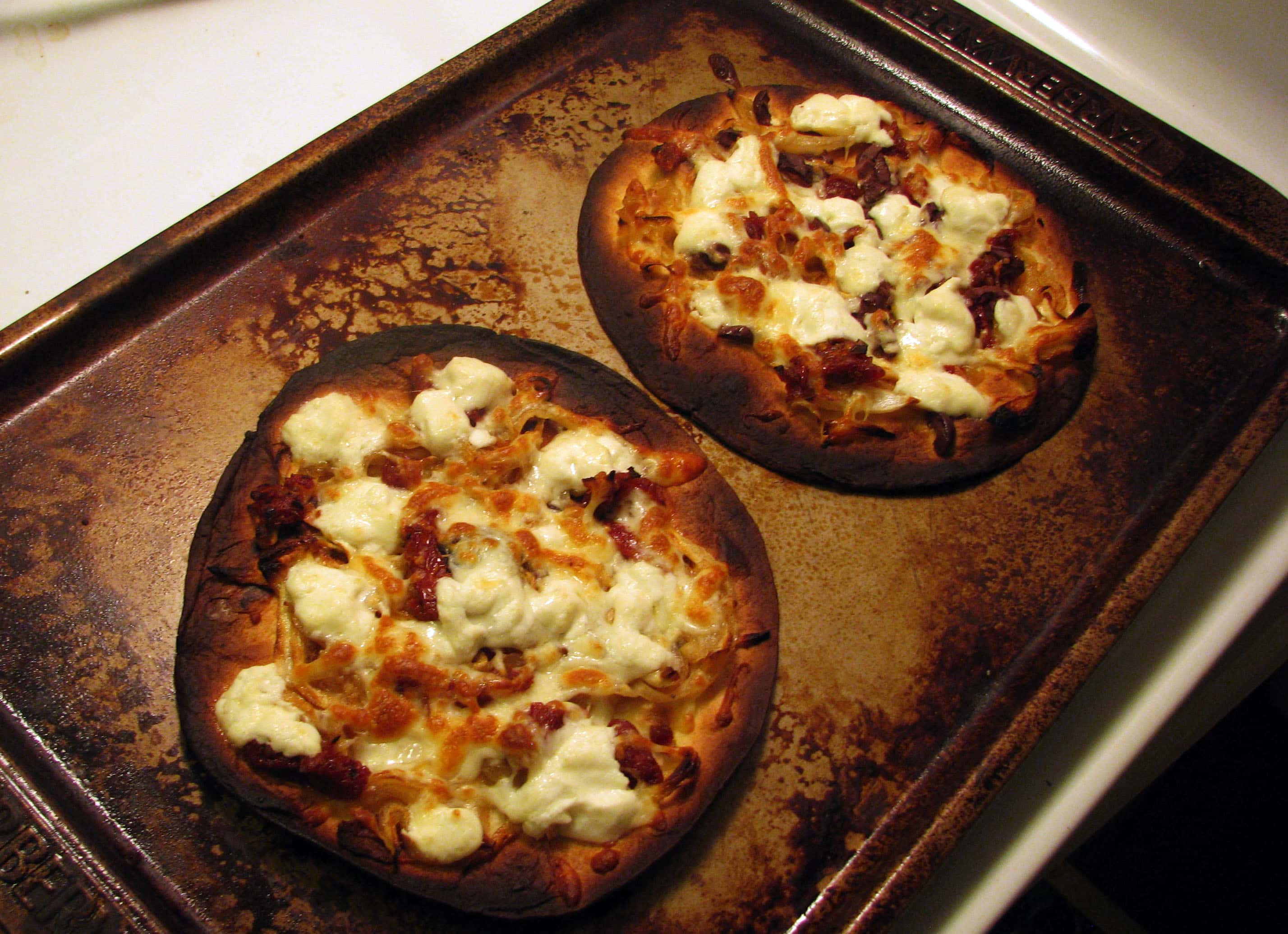 Yum!  The sweet onions, salty cheese, and acidic tomatoes and olives are just perfect together!  And, Jay stuck around for nearly a year and has even secured better work hours, so maybe this is magic late-night food.  I say it is.
s
Let the flatbreads cool off the pan for just one minute, then cut them with a sharp knife or pizza cutter and enjoy!  I serve them with salad or a green vegetable, but they'd be fabulous as an appetizer or light lunch!
s
Note: I know flatbread is, like, it's own thing, but the oil/toasting process makes the tortillas perfect for this dish, and it's so easy!  If you're snobby, make your own flatbread and teach me how. Please.
NoteDos: Sorry my pan is so gross.
NoteTres: I had another idea!  How about toasting a bunch of tortillas in advance and putting out several toppings and having a flatbread bar for a party?  I'm gonna do THAT. 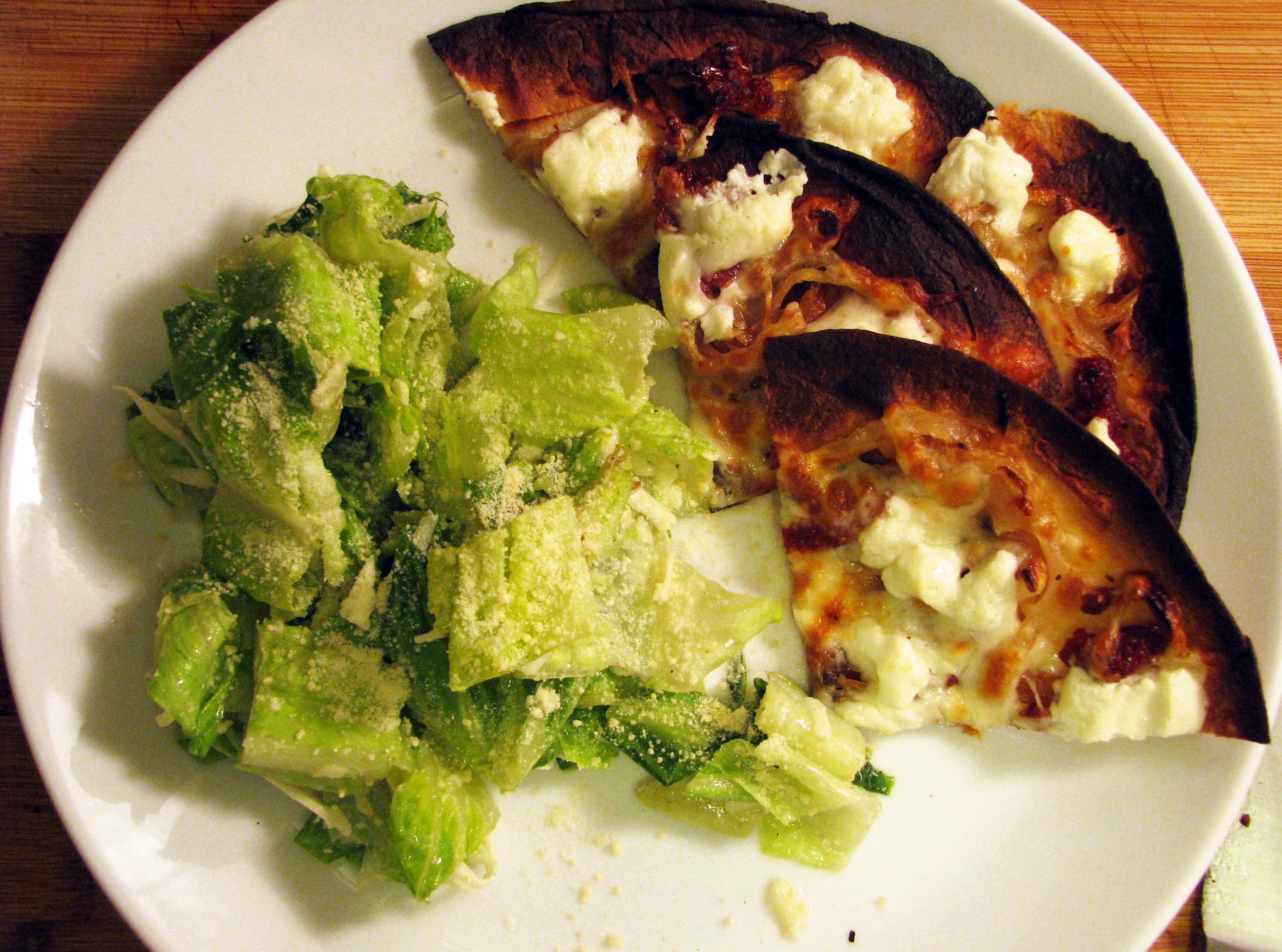