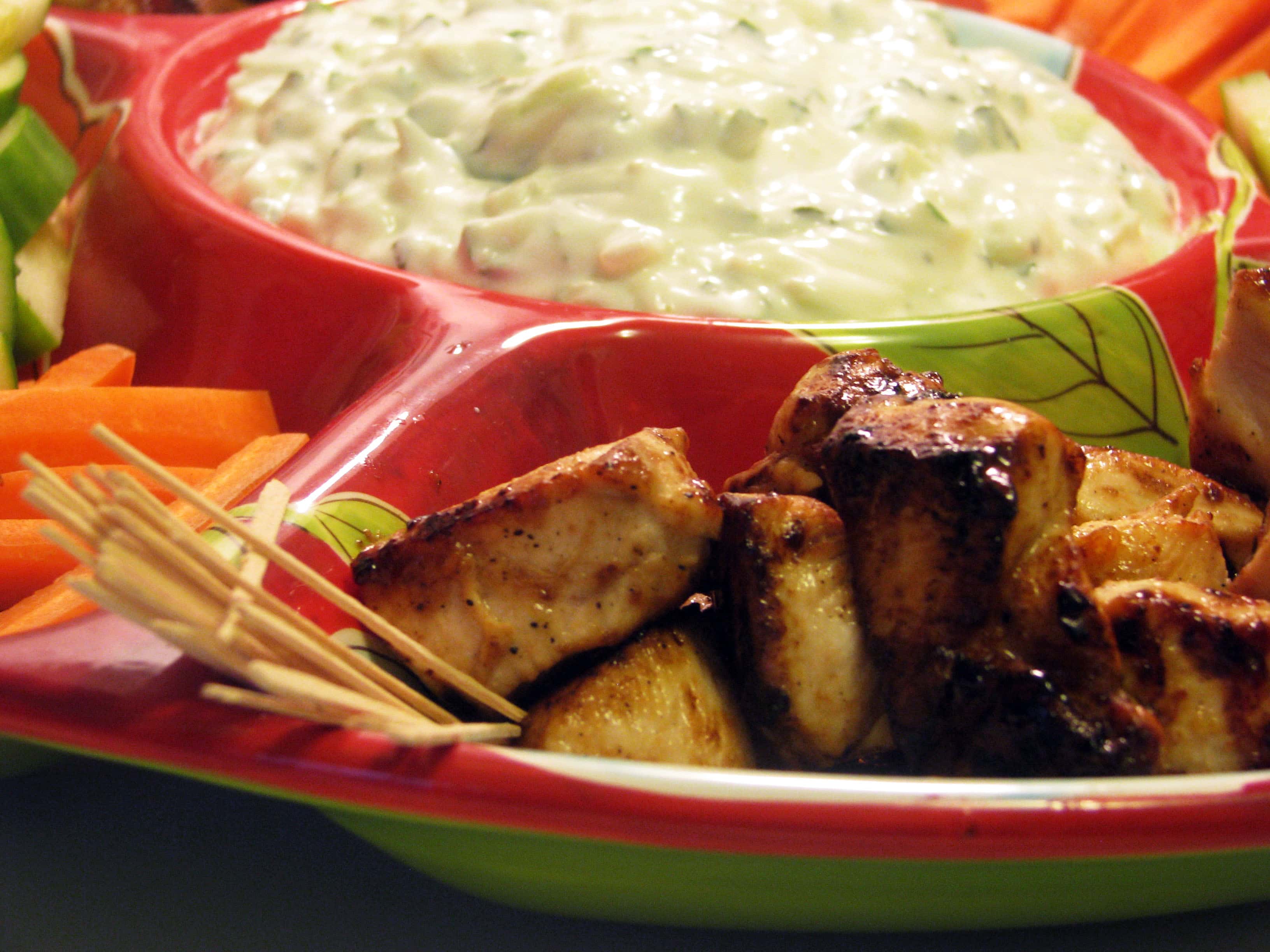 This has recently become one of my favorite ways to serve chicken, especially in the summer - Greek-style with tangy Tzatziki Sauce, which you can learn to make here.  The chicken and sauce go great with veggies or potatoes and are healthy yet flavorful.

Greek flavors are some of my favorites, and I love a whole meal that is lemony, oregano-ish, and honey-esque.  Lemon, honey, olive oil, garlic, and oregano are cornerstone flavors of Greek food and can be mixed and matched in a thousand ways to create different dishes!

I made this chicken by cutting it into smaller pieces before marinating, but you can certainly use large chicken pieces and marinate for longer - it'll taste great either way!  This is a fun snack-style way to serve them with the Tzatziki sauce though, and I love it. 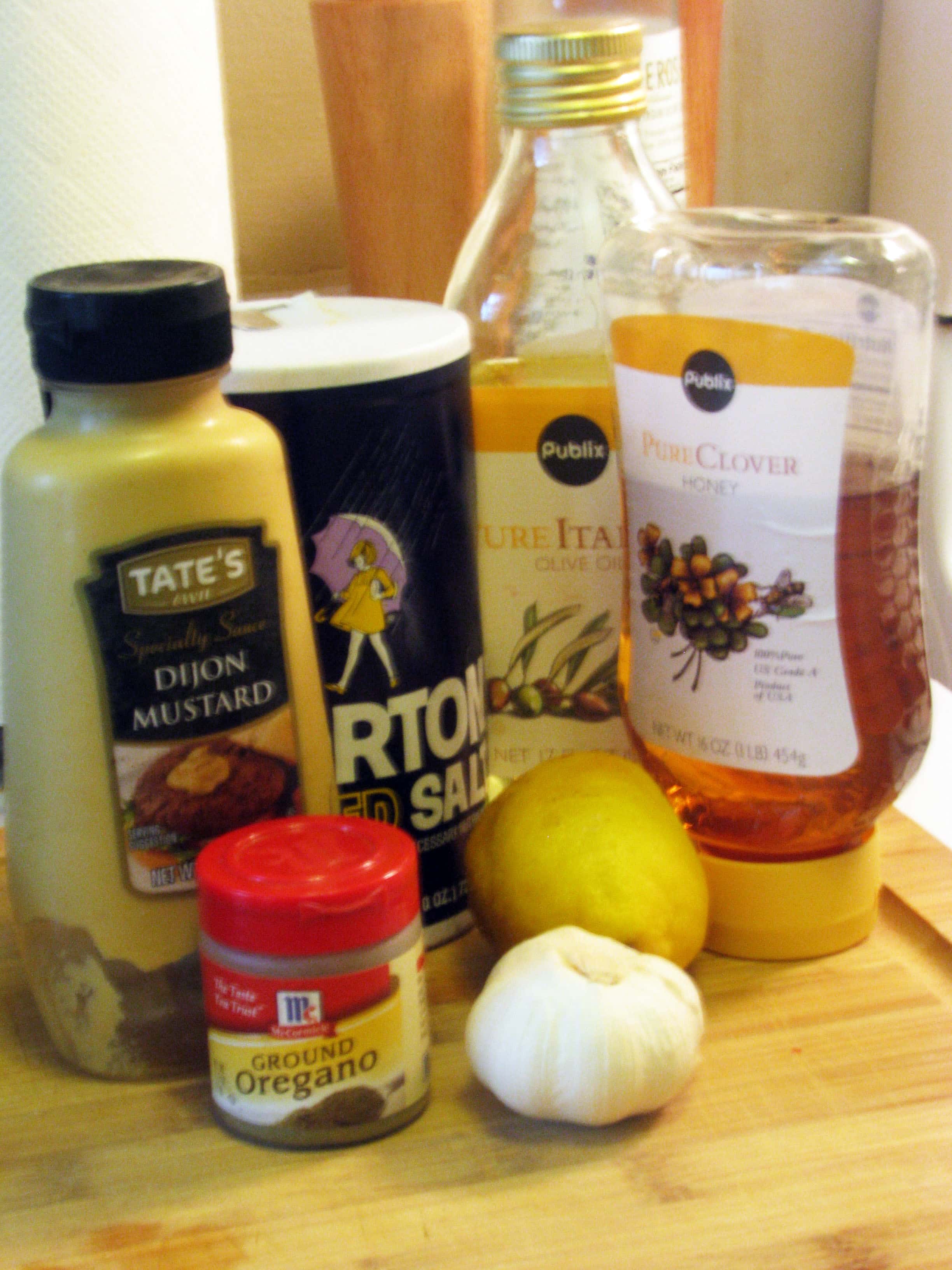 To start, I made a simple marinade.  For the marinade, I used:

For the garlic, crush the cloves with the side of your knife, peel off the skin, and drop them in a bowl with the rest of the marinade ingredients. 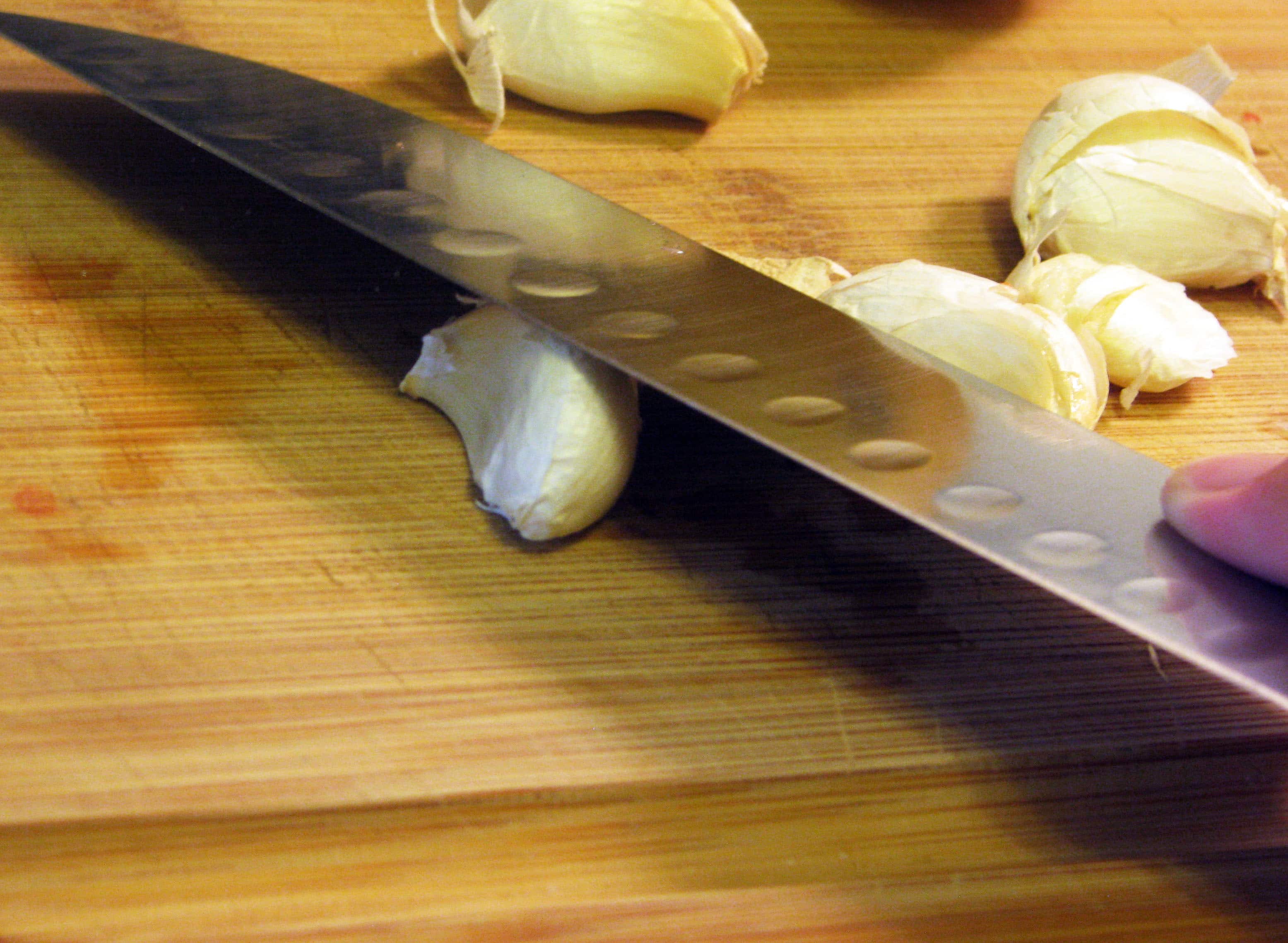 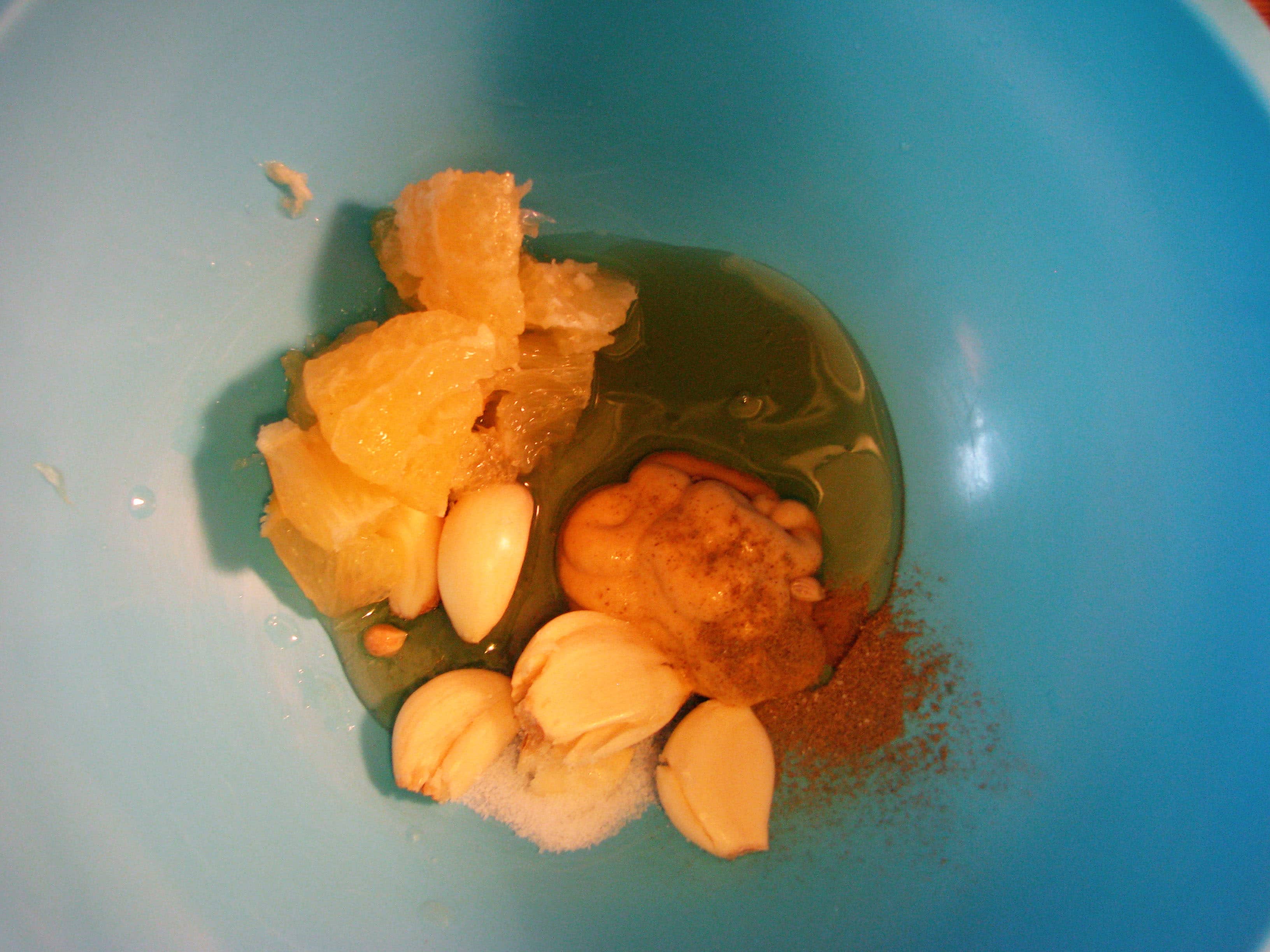 See?  Just give the garlic a good whack to break up the cells, no need to mince or chop anything.  Ignore the lemon seed, and the fact that my lemon looks like an orange.  I like the pulp, so I use it.  I'd advise that you do the same.
space
Whisk the marinade together... 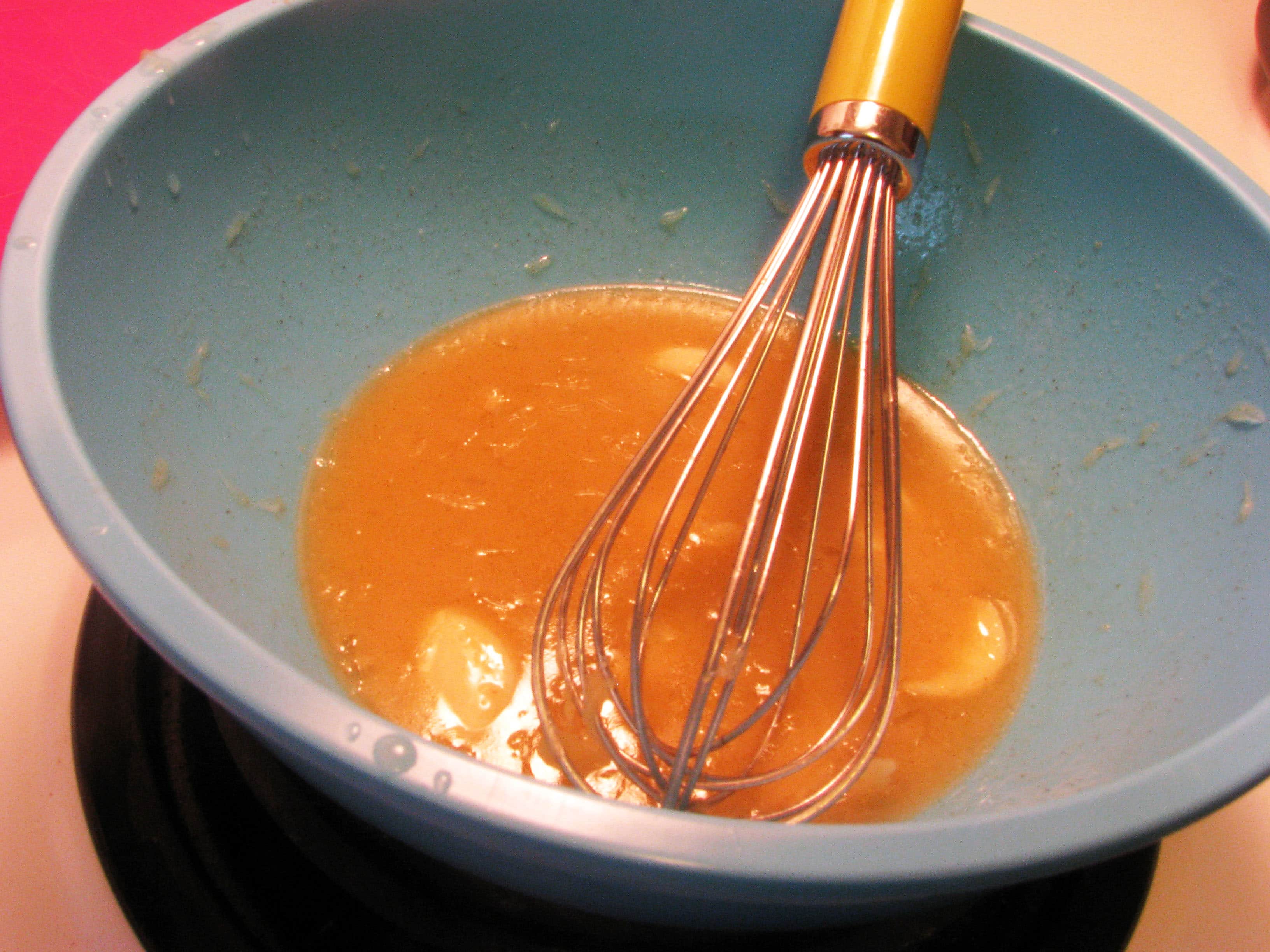 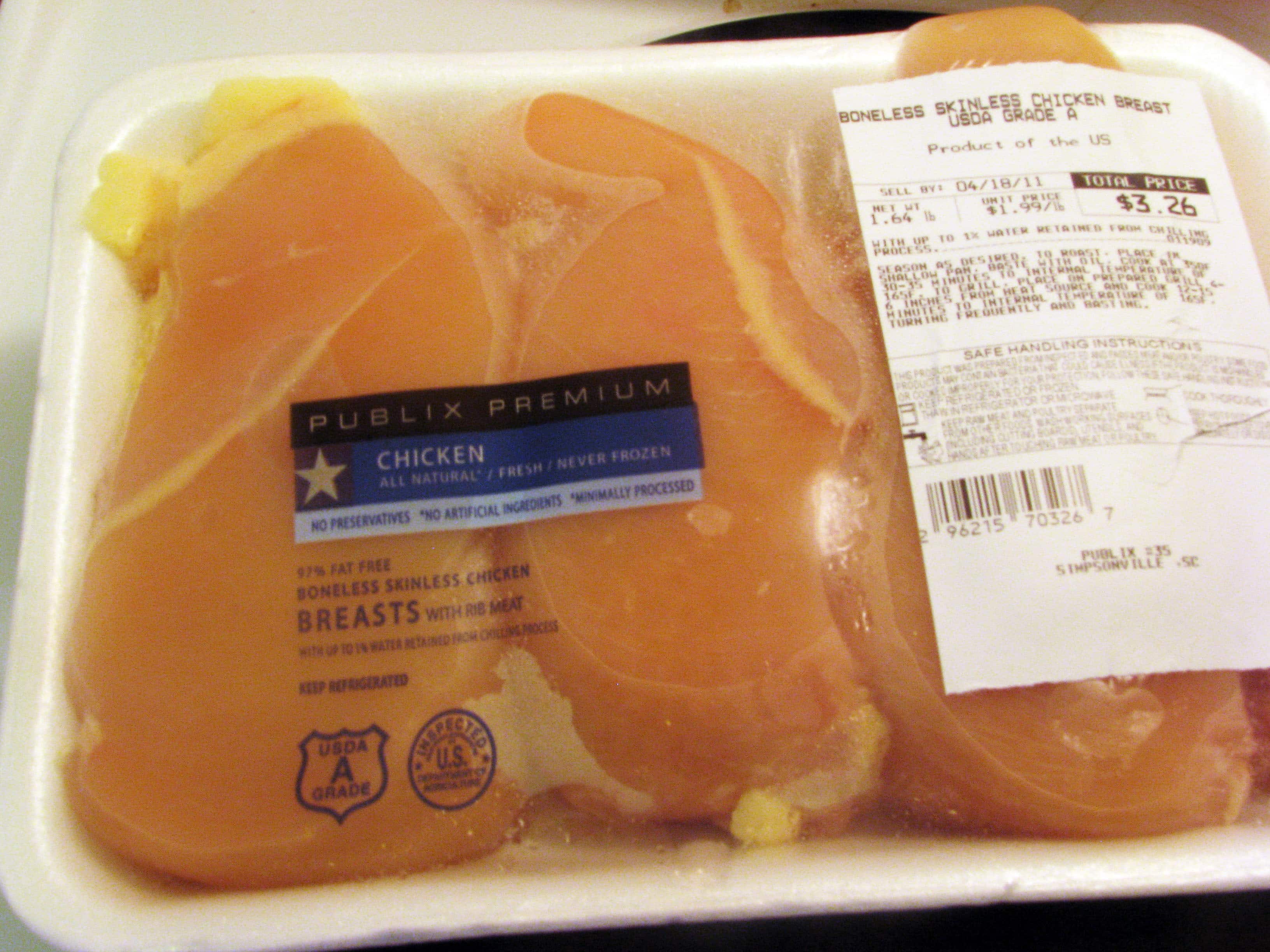 And for heaven's sake, taste it.  It should be very lemony, slightly sweet, and a bit saltier than food should taste.  Adjust the salt and lemon as needed.   Then grab some chicken.  For this amount of marinade I used three medium-sized breasts.
space
Cut the chicken into 1-inch (use a ruler....) cubes using a new knife and meat cutting board...don't use them for anything else after you cut the meat.  Ew. 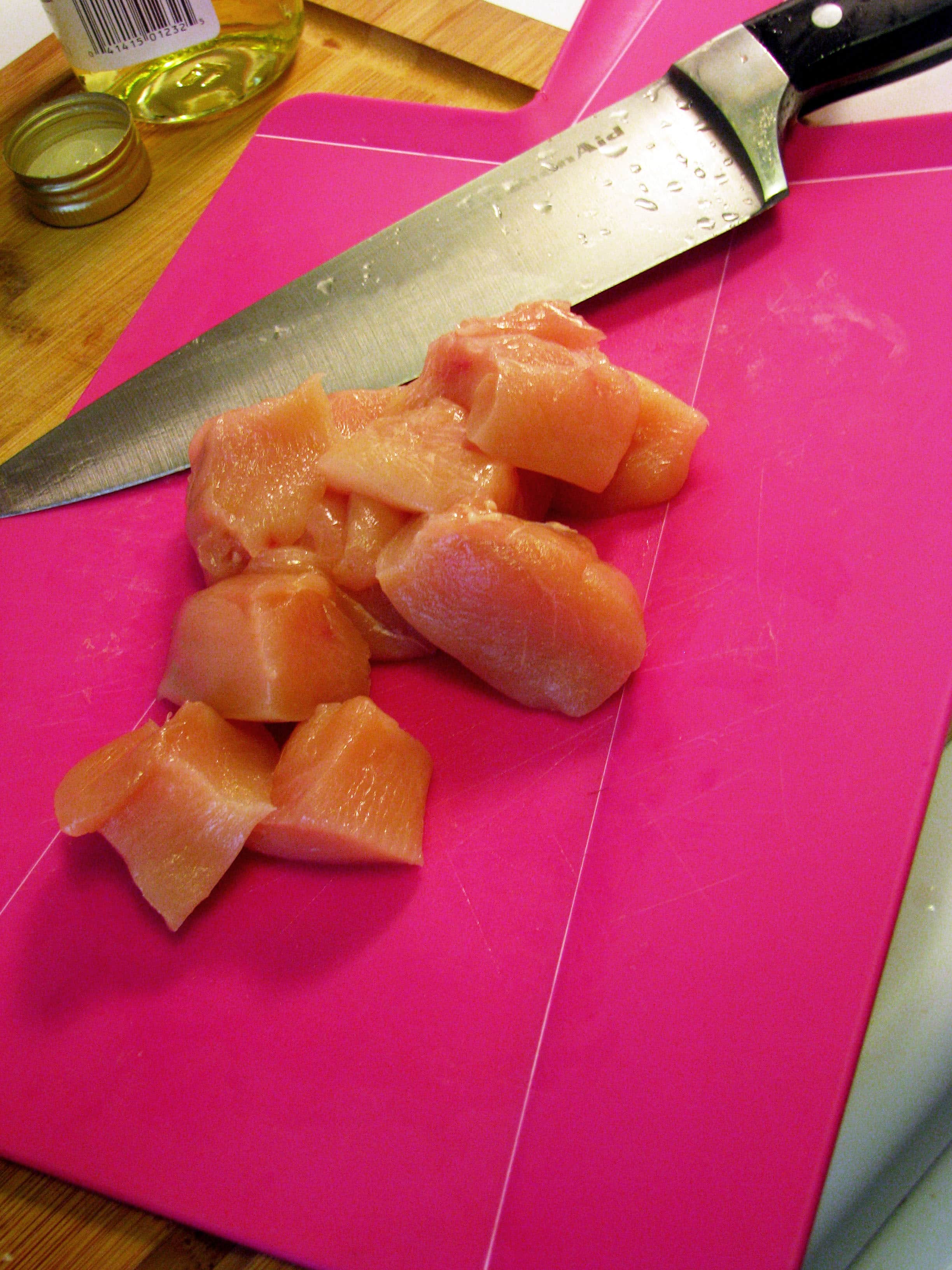 Now throw the chicken pieces into the marinade, submerge them completely, and let them marinate!  If you're going to cook in less than two hours leave them covered on the counter, and if you're going to let it sit for awhile (8 hours max since the pieces are so small) put them in the fridge.  Larger pieces of chicken can be marinated overnight. 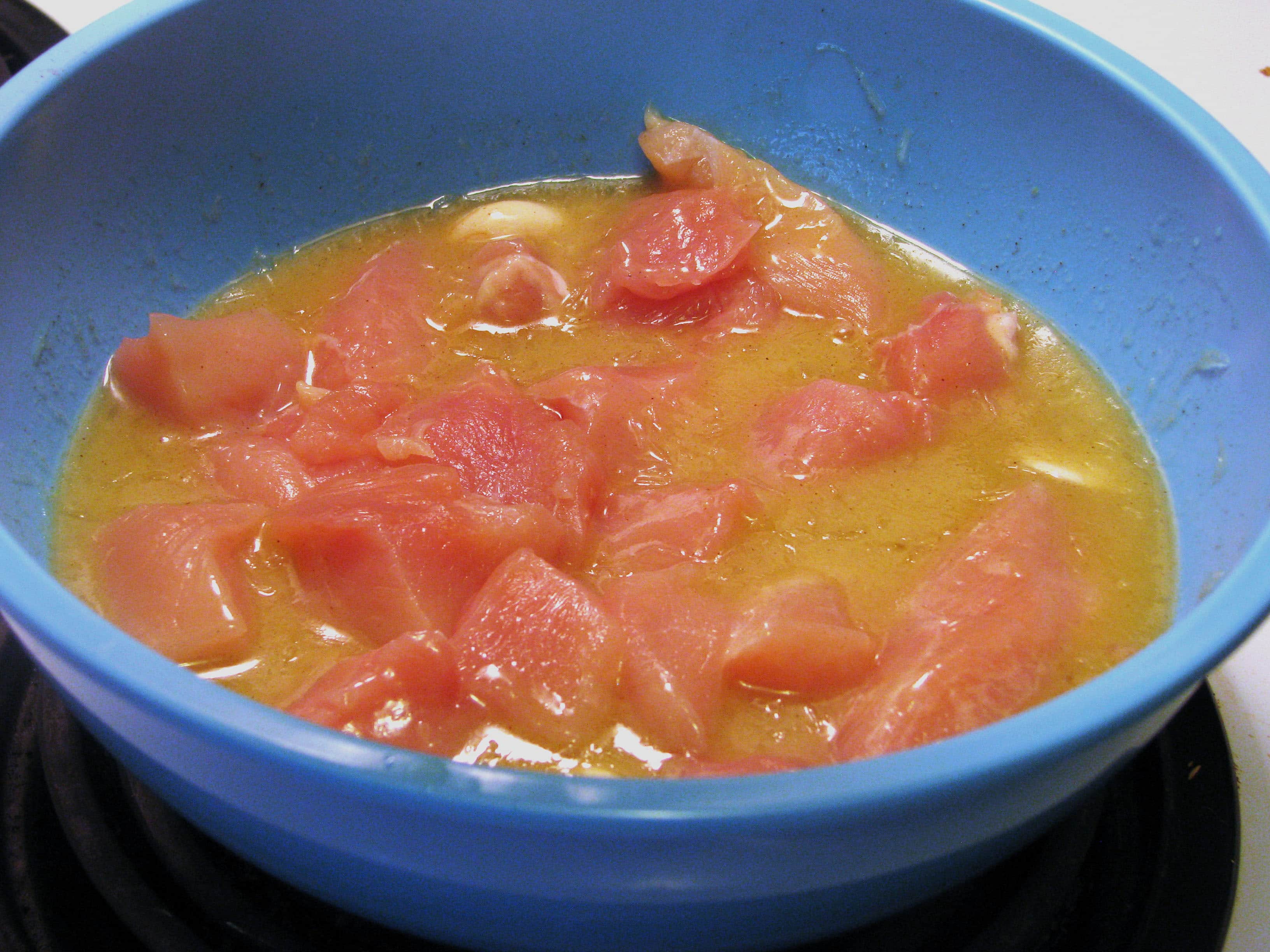 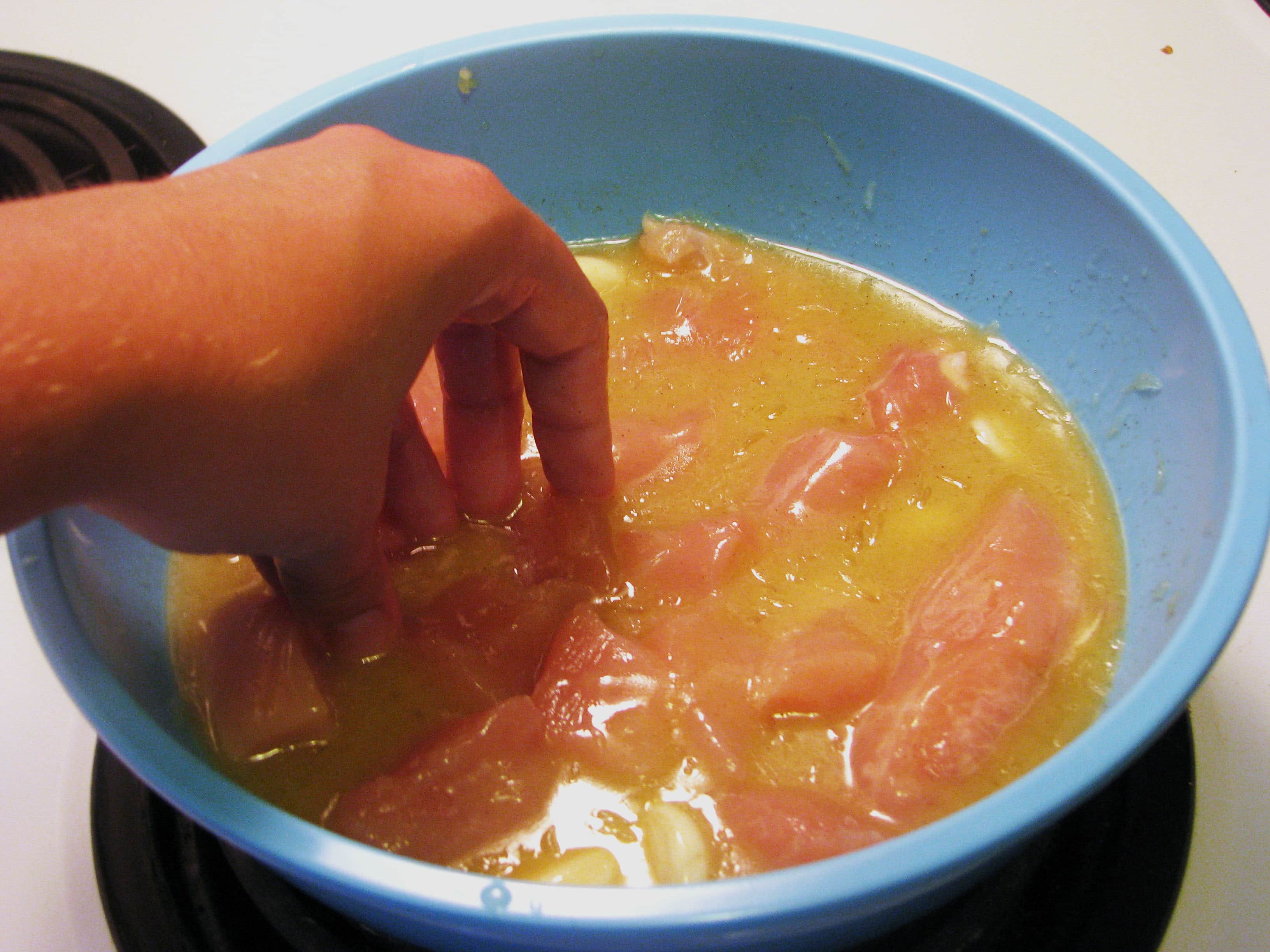 Now we have a problem.  I tend to like to clean up and do other things while my chicken is marinating, like shower, clean the kitchen, and drink boxed wine.  But first I had to deal with this.... 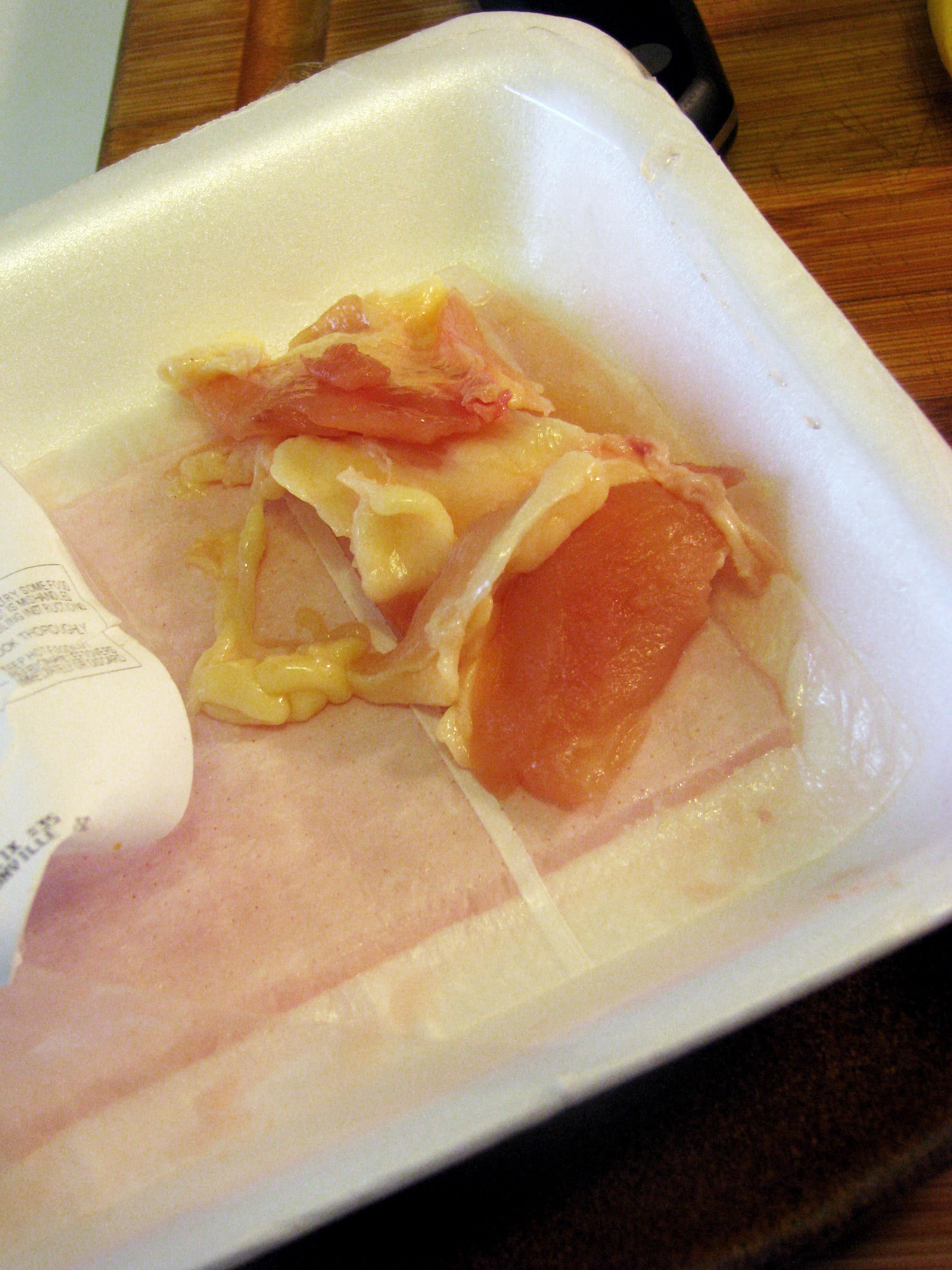 While this was looking at me.... 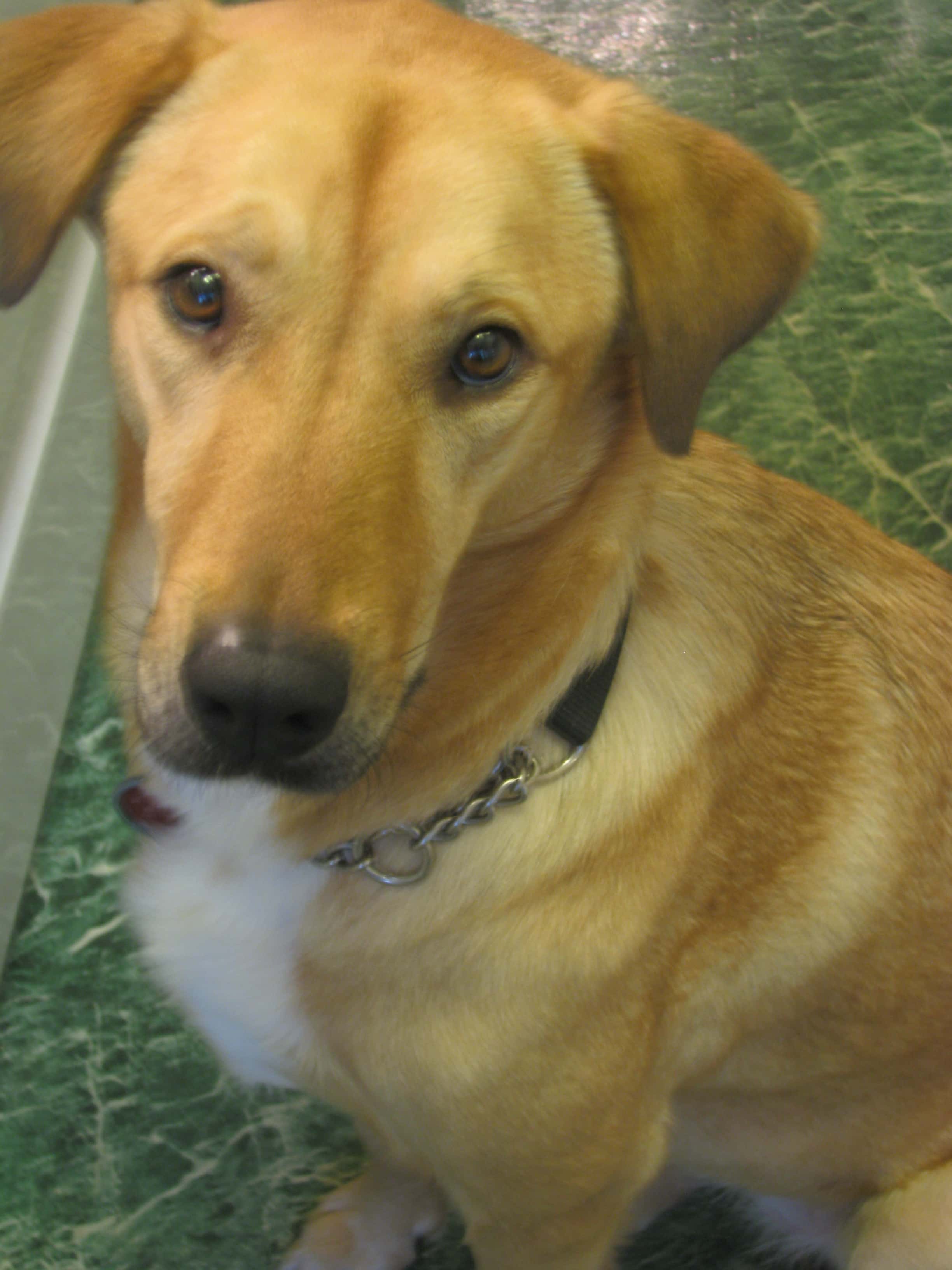 This is Callie.  I do feed her, contrary to what she tells you.  The thing with Beneful is that it isn't RAW MEAT, and, as you can see, Callie likes RAW MEAT.  I bought the meat and may as well use it, right?  If you don't feed your dog human food or raw meat or anything besides processed dog food that is completely your choice, but don't judge me for treating mine like, um, A DANG DOG.  Because that's what Callie is.  I like teasing her and taking pictures of her too, so that's what I did.
space
Please be advised as you read this next pointless section of my pointless blog that Callie speaks in a redneck voice.  It isn't her fault, her mother was a bit promiscuous and she spent the first week of her life at the Human Society, which is in Traveler's (Travelers'? Travelers? Travelerz?)  Rest. 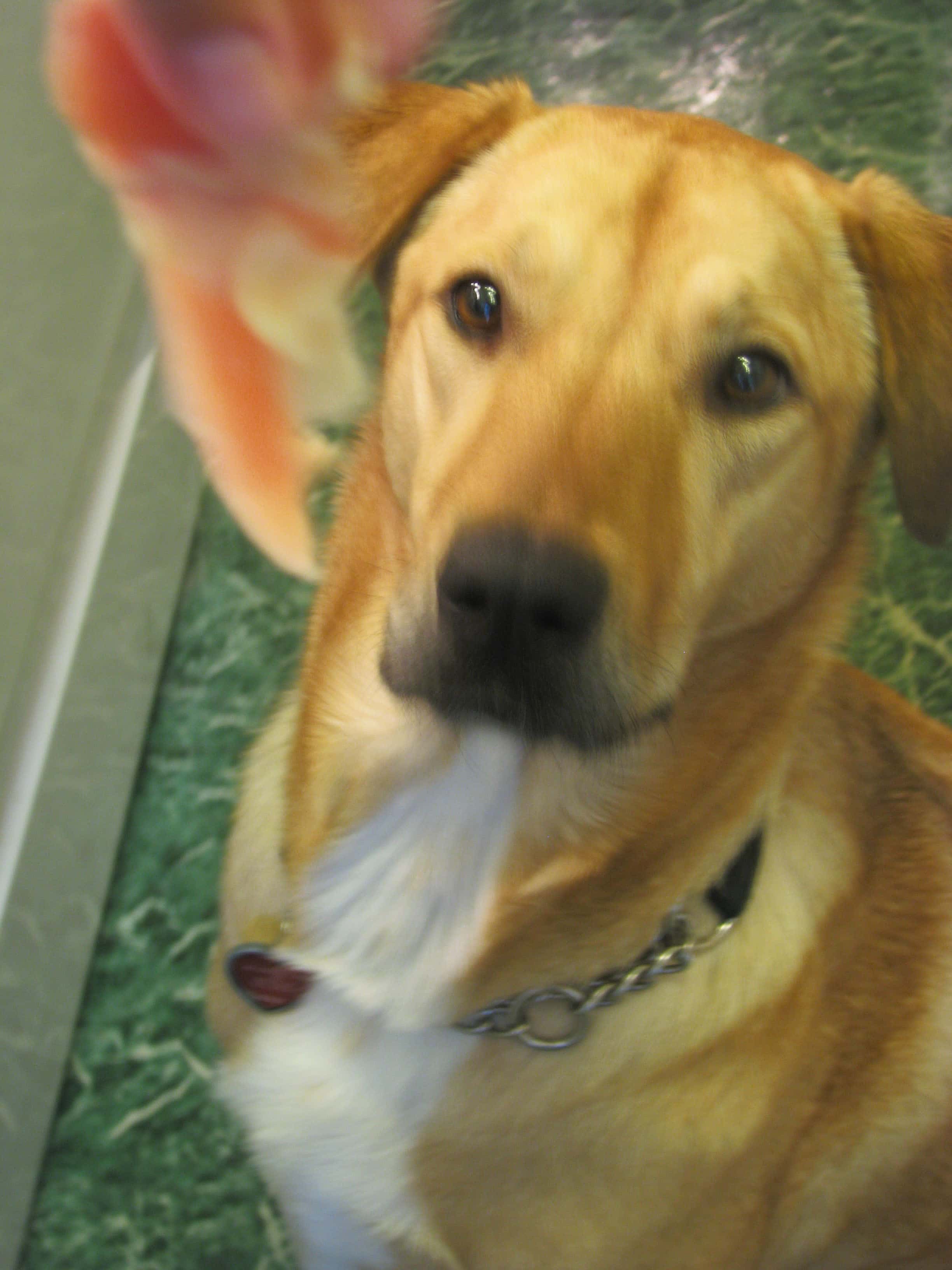 Mama! I sweartahgawd I love raw meat! I'll sit here as long as it takes for you to get the dang picture in focus. 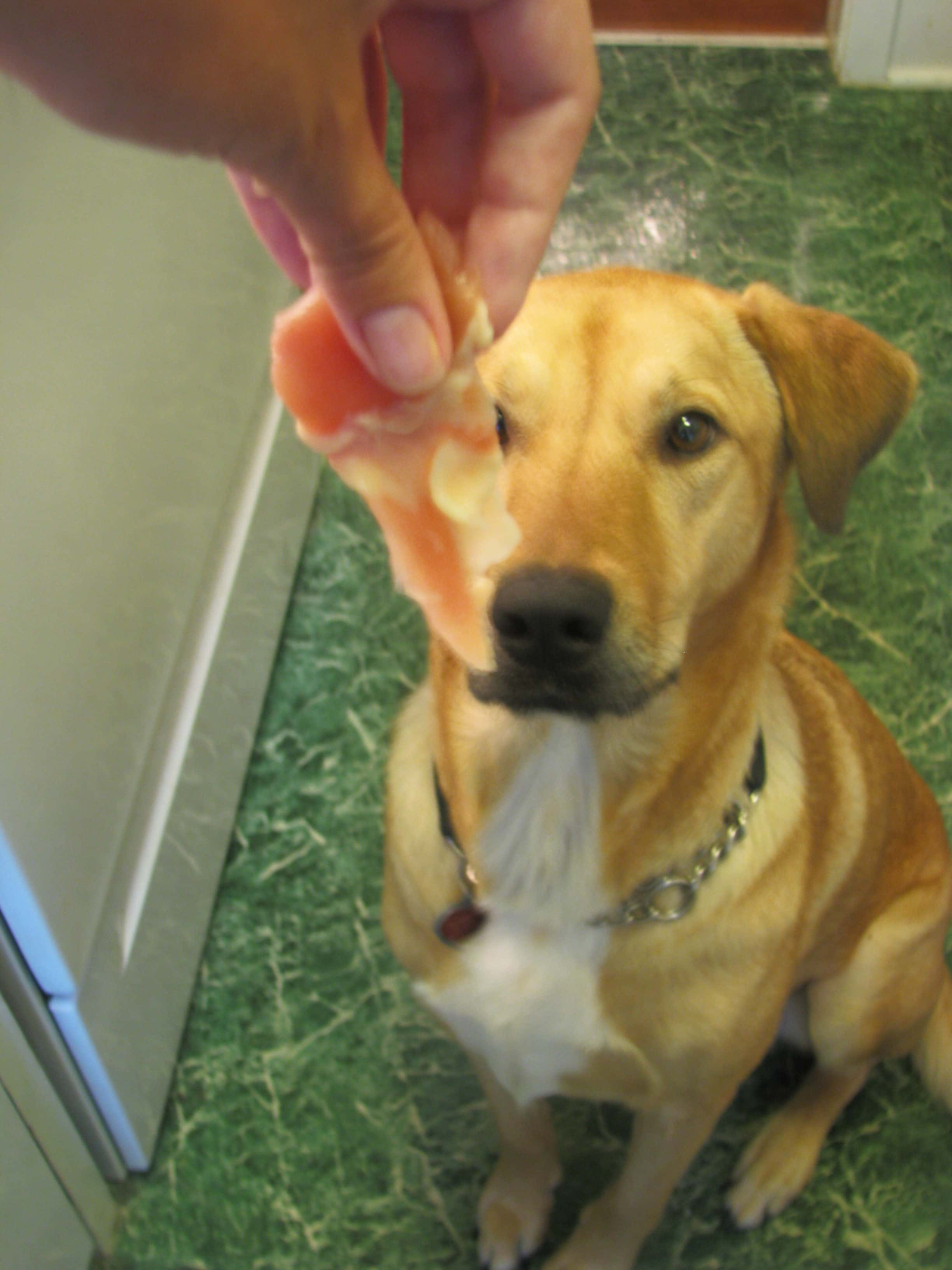 That's better, yah moron. I'm sittin'. I been sittin' for HOURS waitin on you to drop somethin'. CAN I HAVE IT NOW??? 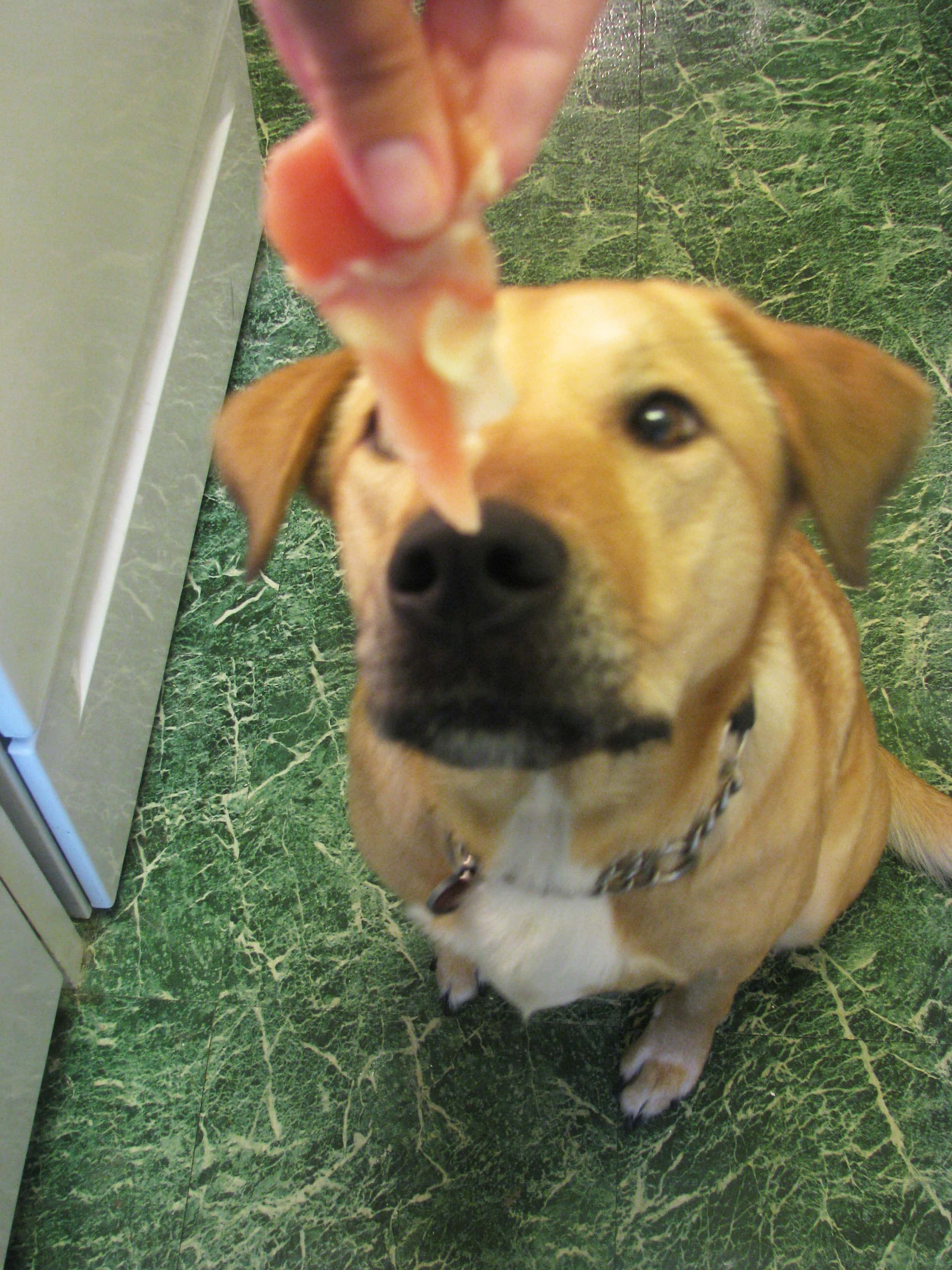 If you keep lookin in that camera you ain't gonna see how close I'm-ah gettin'. 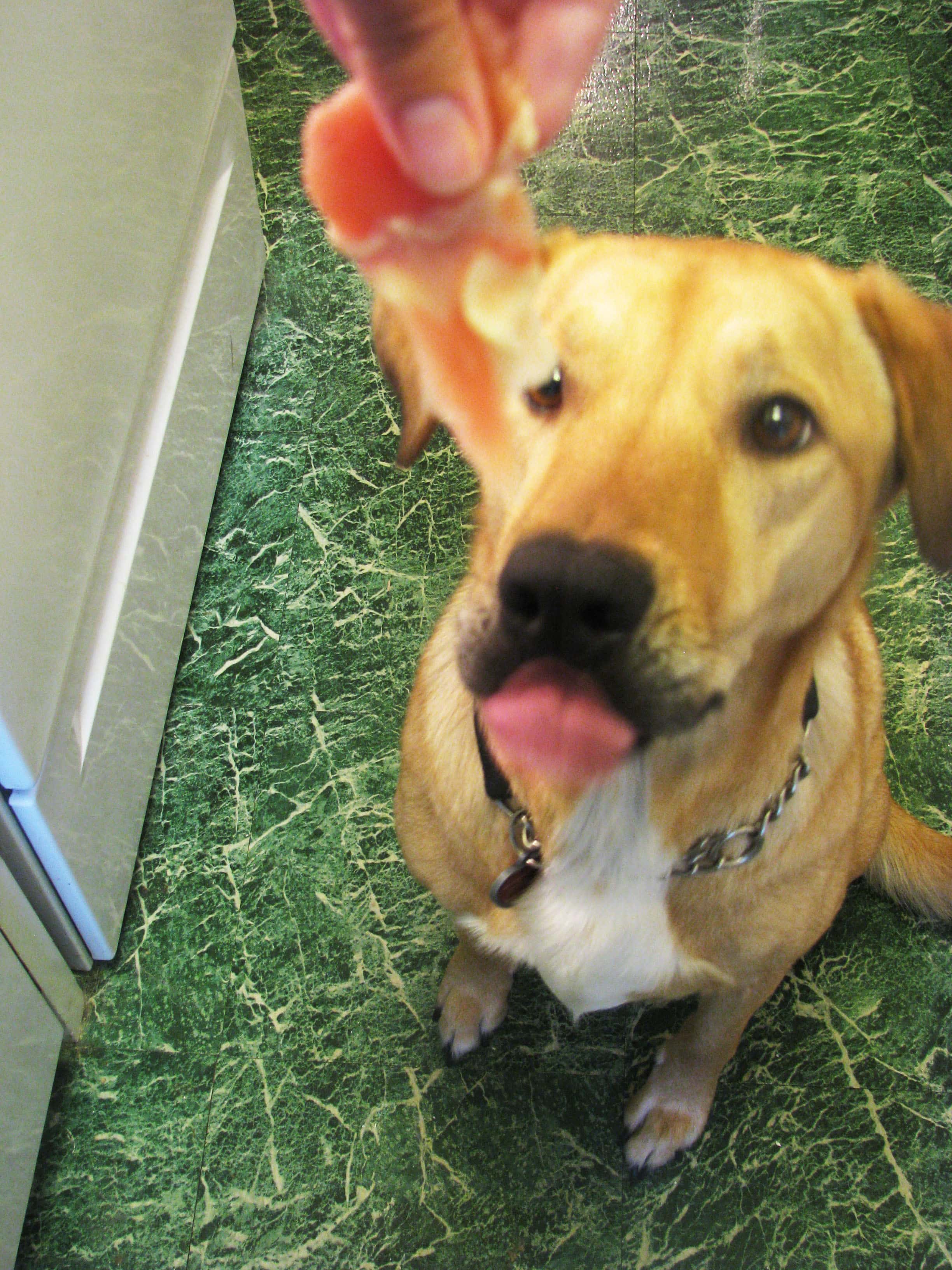 OHMYGOODNESS!!!! Ah sweartahgawd that tastes good! Give it! Give it! This ain't fair, I'm DOIN' what I'm 'uhposed tah be doin'!

If reading that in a redneck voice wasn't the dumbest part of your day, I don't know what is.  And, I'm sorry for putting you through that.  Callie's really stinking cute.

Anyways, by the time I got done taking pictures of her wanting raw chicken, the chicken was done marinating!

Not really, but close.

Let's move on from redneck dogs and cook our chicken, m'kay?

I cook mine inside in a pan because 1. I don't have a yard, 2. I don't have a grill, 3. I'm lazy, but this would taste great on a grill!  Skewer the small pieces so they don't fall through the grates. 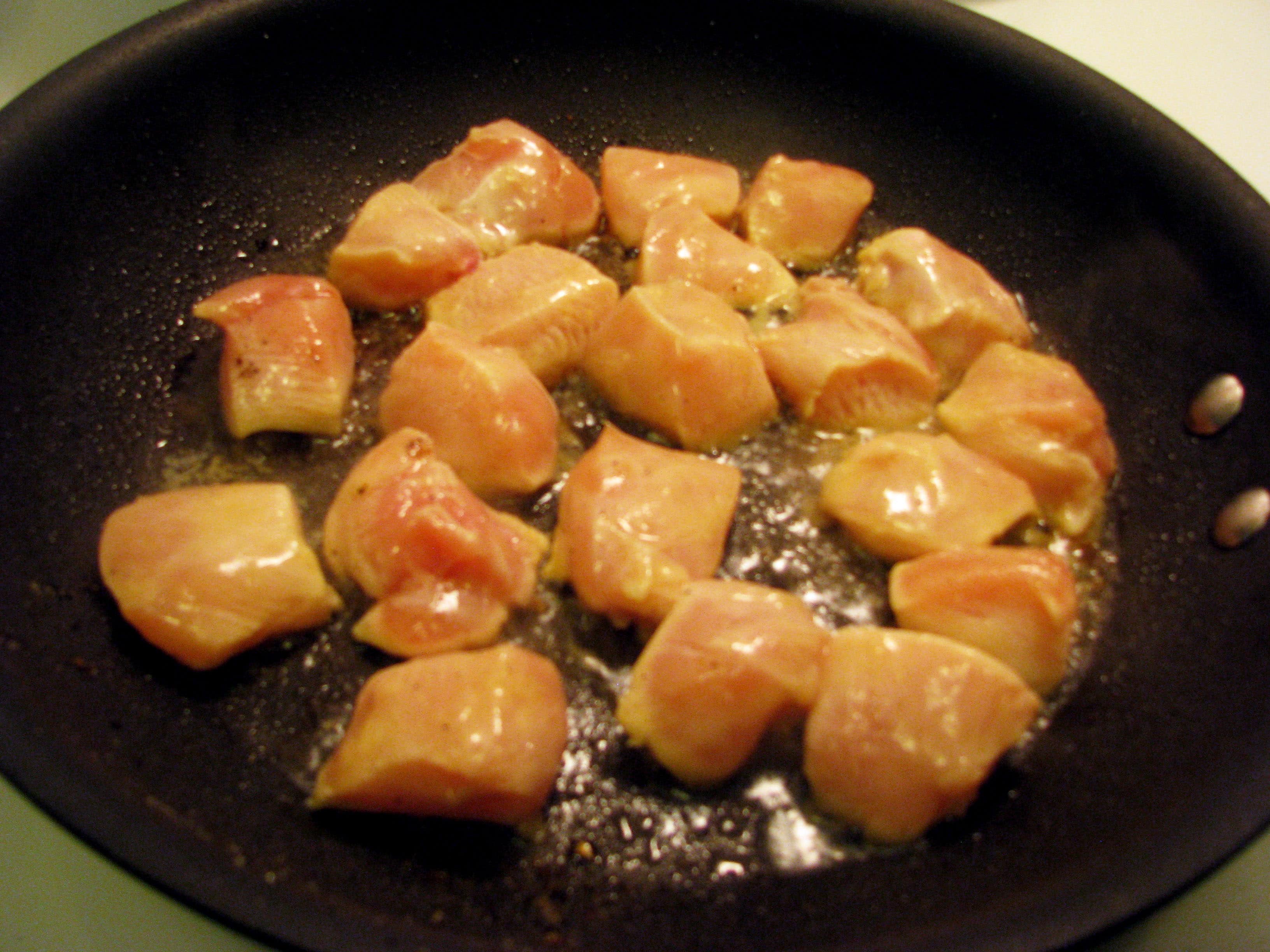 I just heated up a pan though, and when it was nice and hot I put the chicken in (only one layer, cook in batches if you need to) for about 5 minutes on each side until they were brown and crispy and tender and juicy and delicious.  You don't need to add oil to the pan because there's oil in the marinade, remember?  This chicken comes non-stick.  Discard the excess marinade, or if you want to be thrifty and use it put it in a separate pan and boil the heck out of it for 5 minutes at least - it'll be perfect safe to eat as long as you do that!

Make this for a party or gathering of other dog lovers. Or, you know, whoever you like to hang out with.  Serve it with veggies and some pita and accept praise.  Then the next time make it a different way and let me know how it turns out!  Don't forget the Greek yogurt Tzatziki Sauce for dipping. 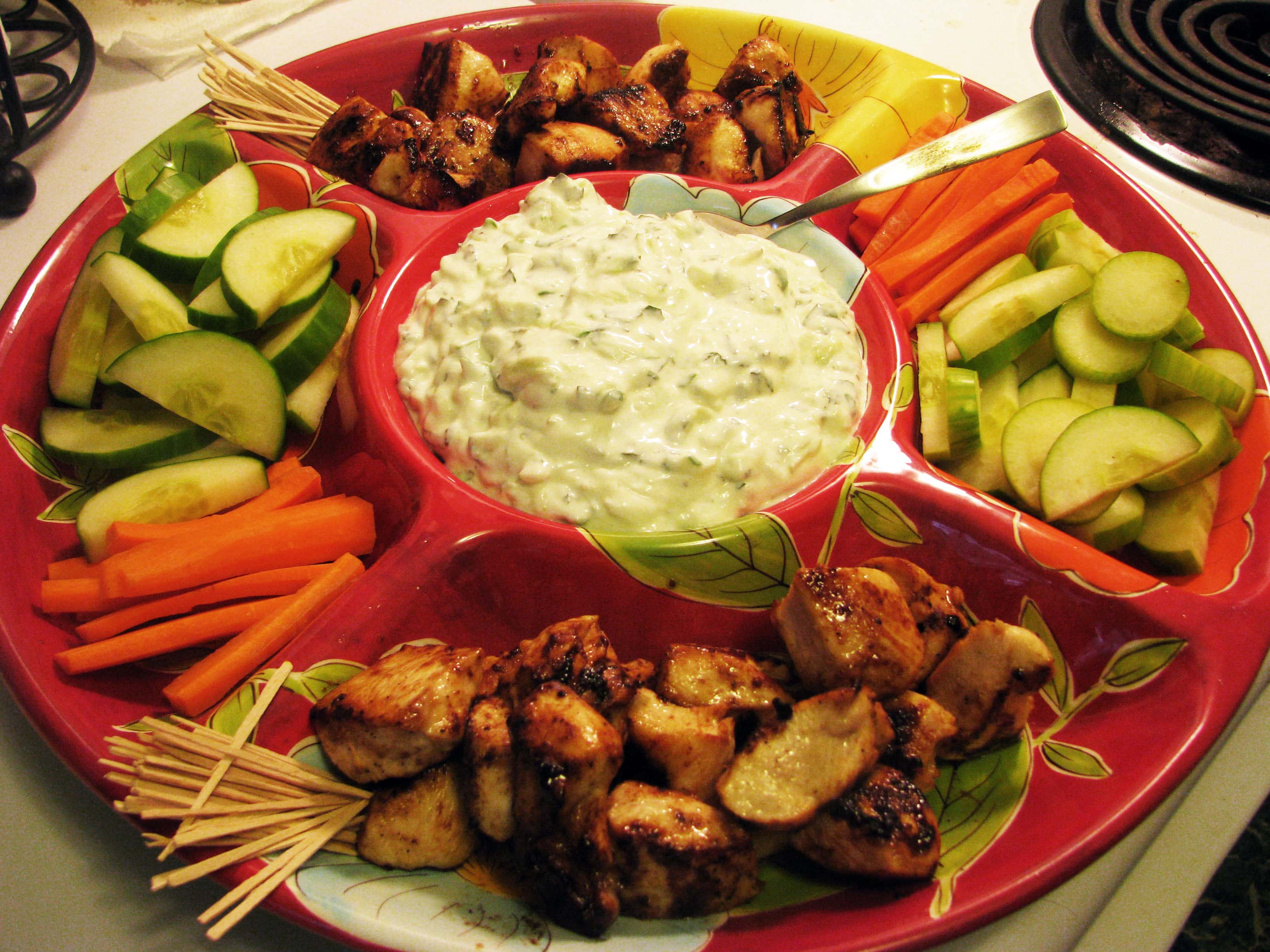