Home » Food » The Most Bestest Appetizer Ever 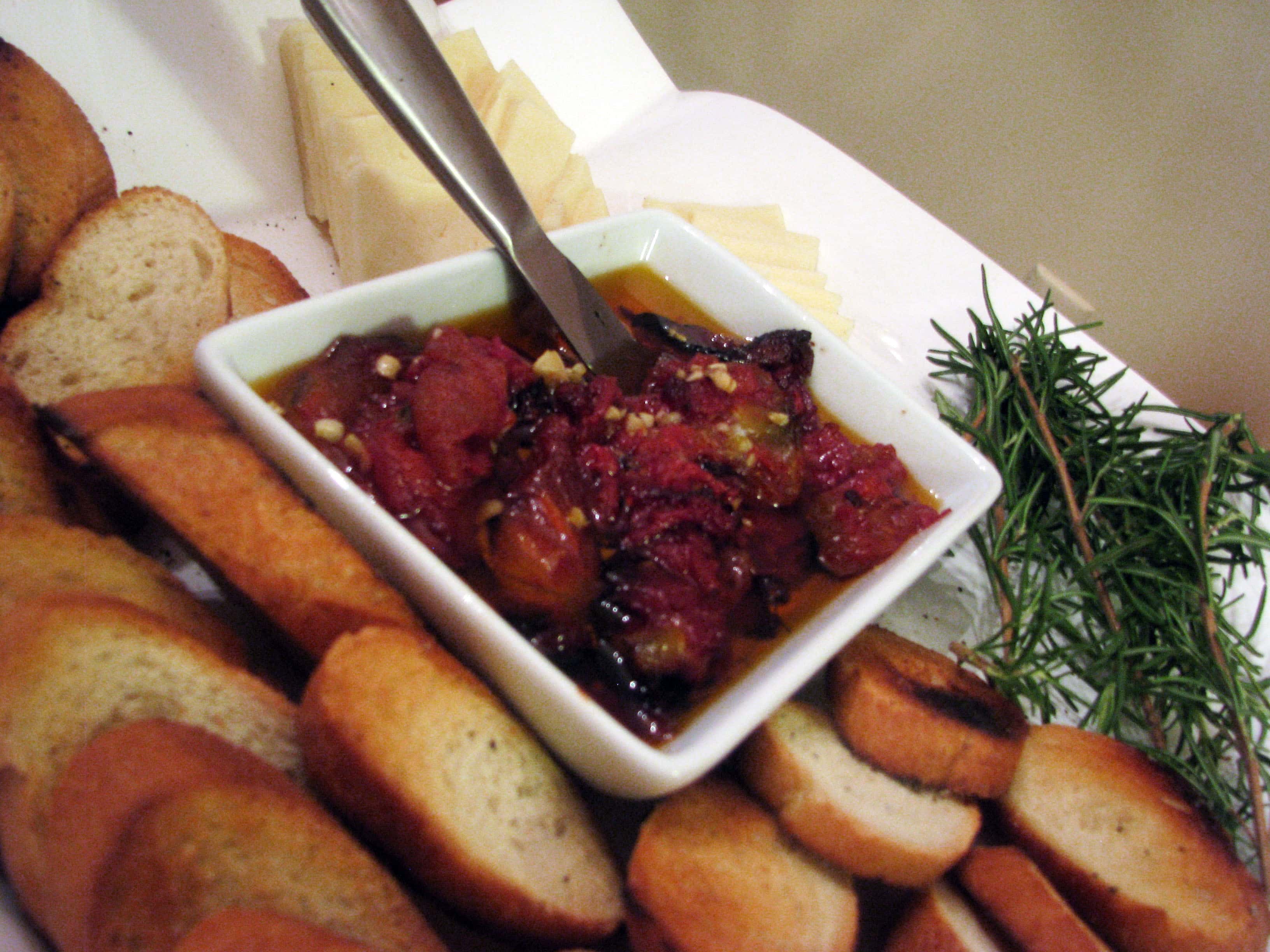 This is without a doubt the dish I made that unfailingly yields the best response.  Especially in situations in which I want to impress people whilst putting forth little to no effort, this is my go-to dish.   As Jay says, it's the epitome of "less is more."  There are FIVE ingredients in these tomatoes and they are amazing every time.

Roasting the tomatoes takes a few hours, so allow yourself time to be home for awhile so you don't burn down your house - that would be super annoying.

If you'd like to learn about a food that is intoxicatingly good and simple to make, lets get started!

It just...sounds good.  Because it is!

First, find some tomatoes.  This time I've used fresh tomatoes because my parents have thousands of them right now, but I often used canned, whole, peeled plum tomatoes and the results are EXACTLY as delicious.  If you use canned tomatoes, be sure you use whole tomatoes and just skip the boiling/peeling step. 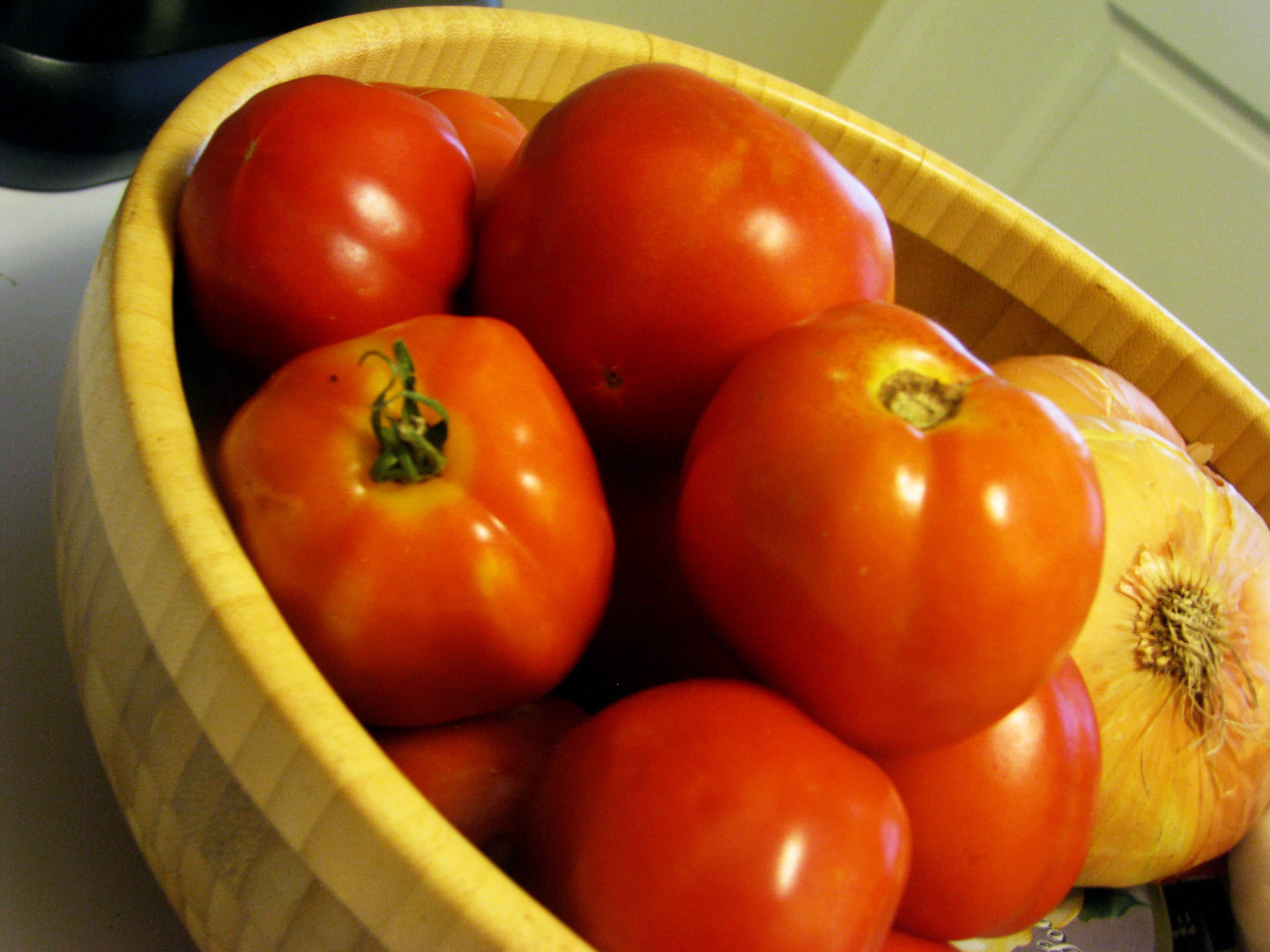 The onion in this picture means nothing, it was just in the same bowl. Ignore the onion.

The tomatoes will cook down in volume quite a bit and this dish can be saved for days in the fridge, so go nuts in quantity.  I used probably 8 medium tomatoes in these pictures.

First, bring a large, LARGE pot of unsalted water to a boil.  While you're doing that, score the tomatoes on their butts by making an X through the bottom through the skin using a very sharp or serrated knife.  The X should be at least 1 inch in diameter and just cut through the skin, not the flesh. 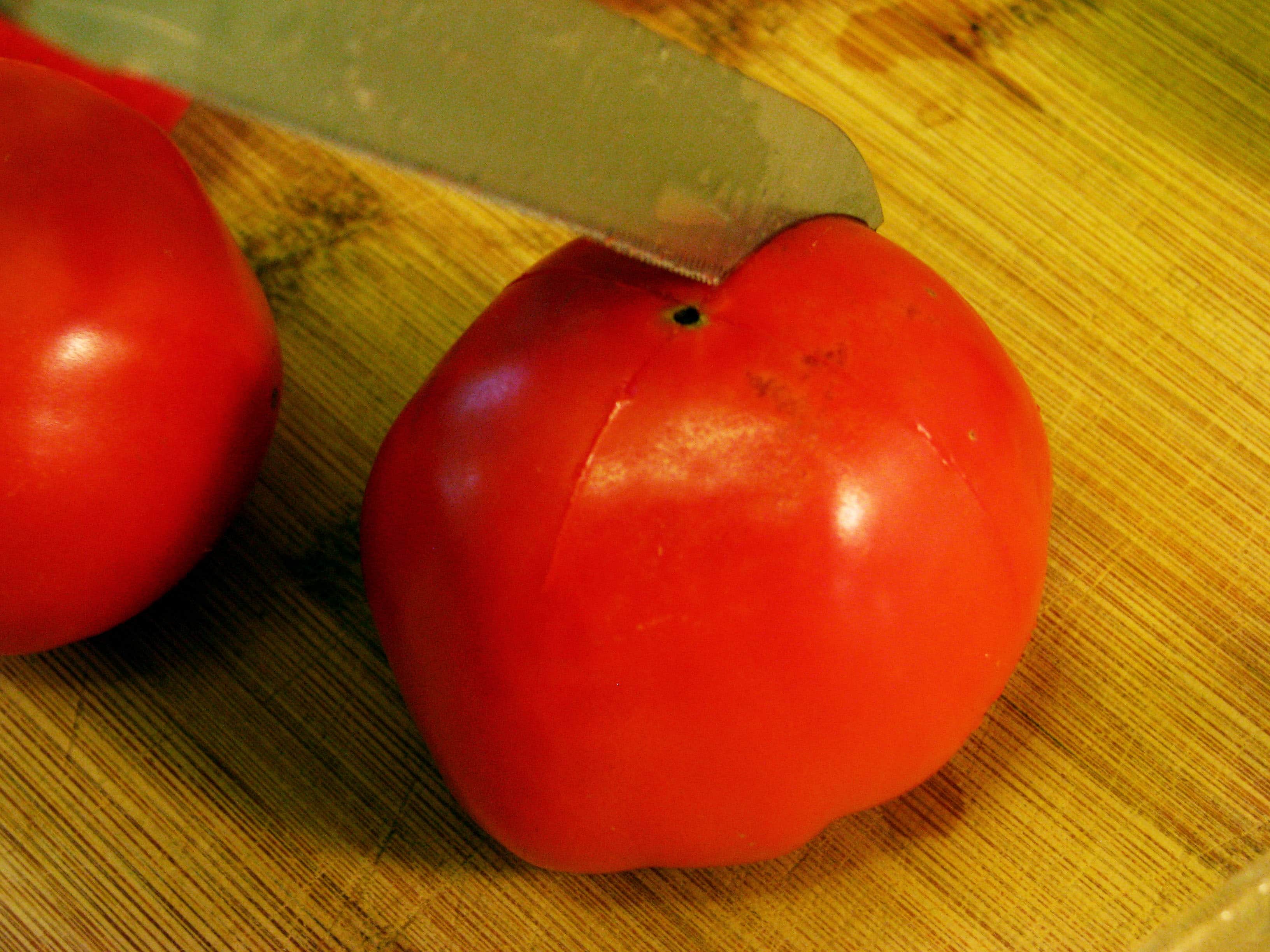 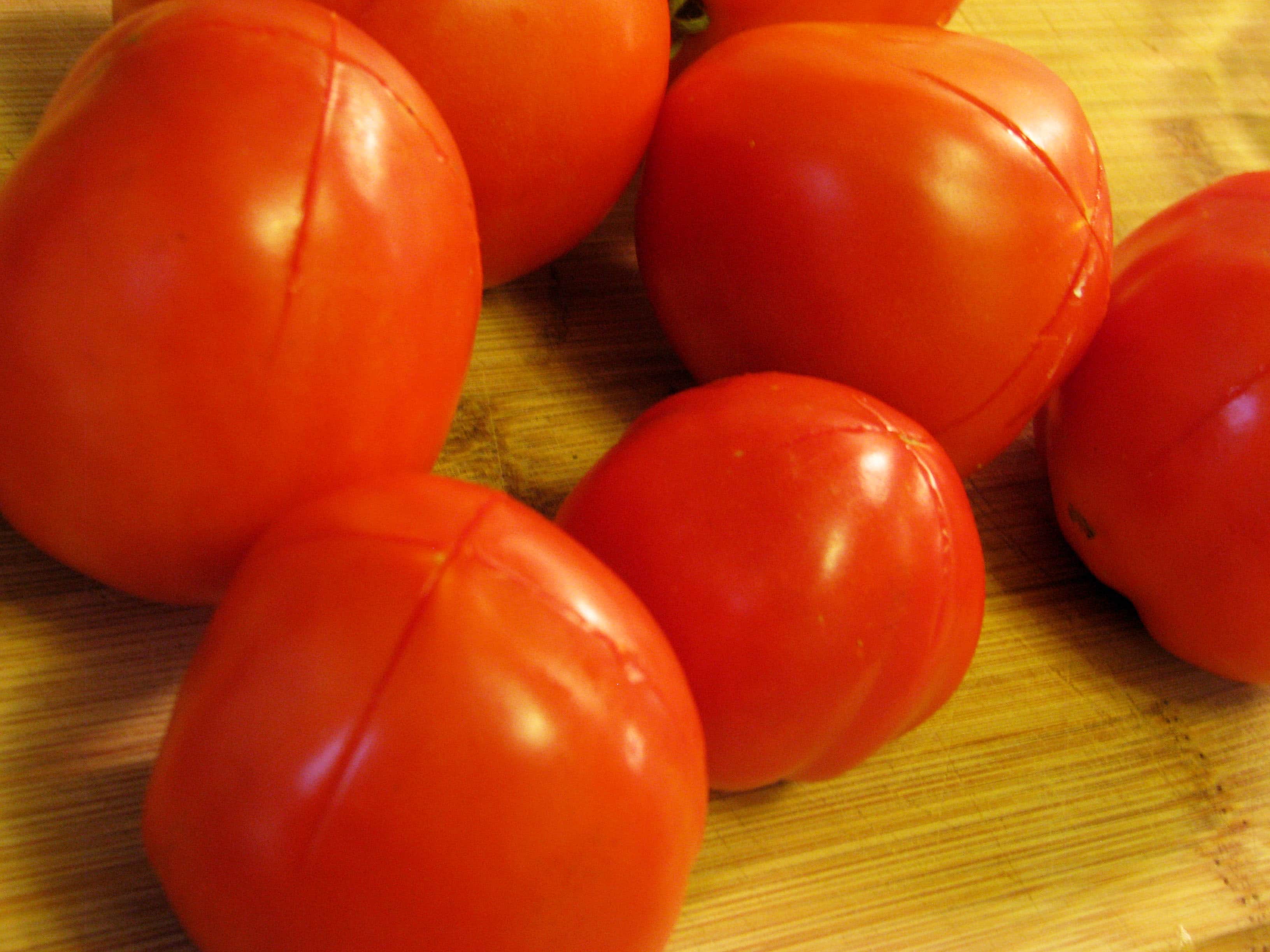 Once the tomatoes are all scored and the water is boiling, drop the tomatoes carefully into the boiling water.  If you don't have a big enough pot or enough water, you can do this in batches - it's a fast process. 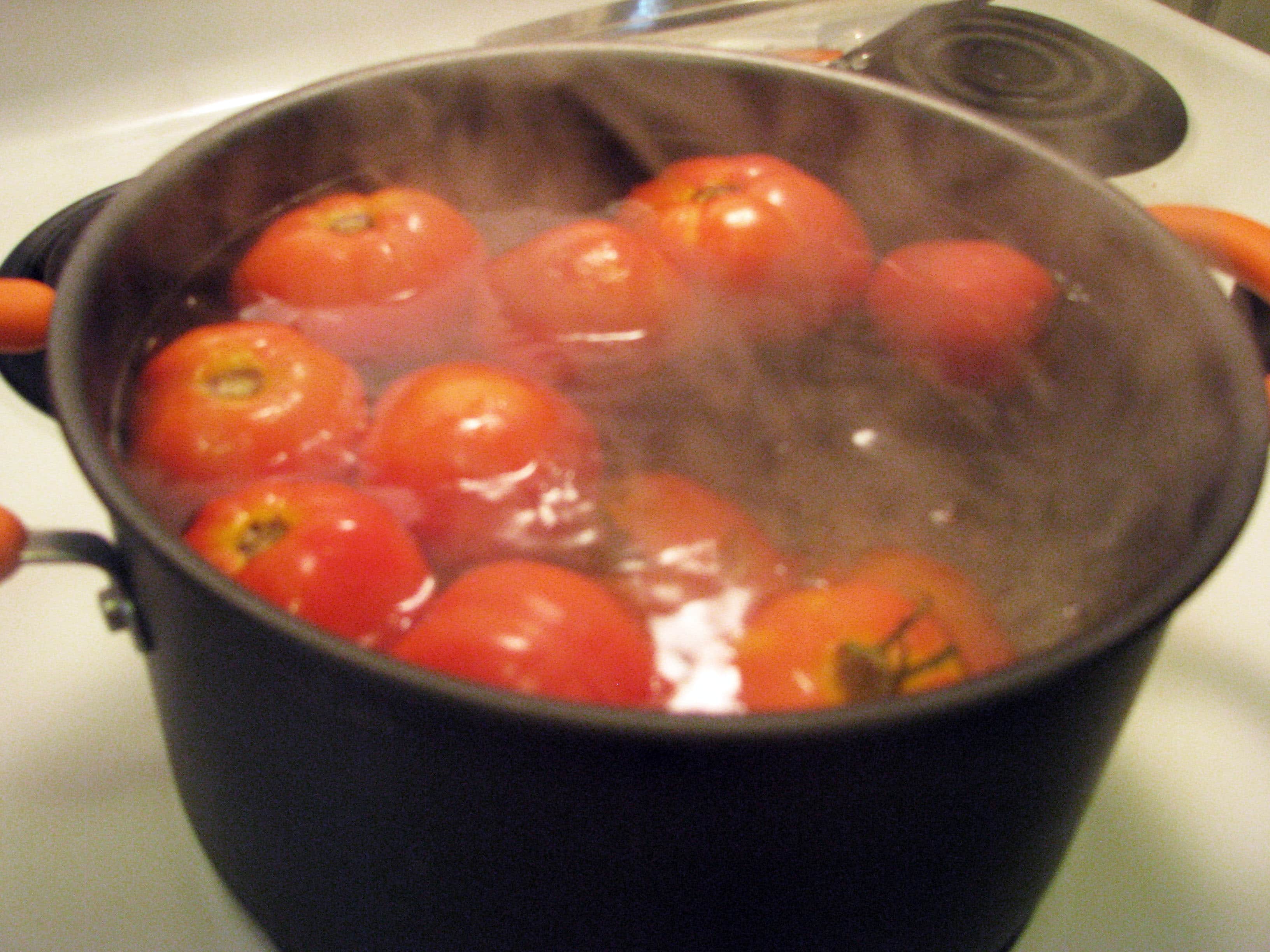 1. Drop the tomatoes into the boiling water. 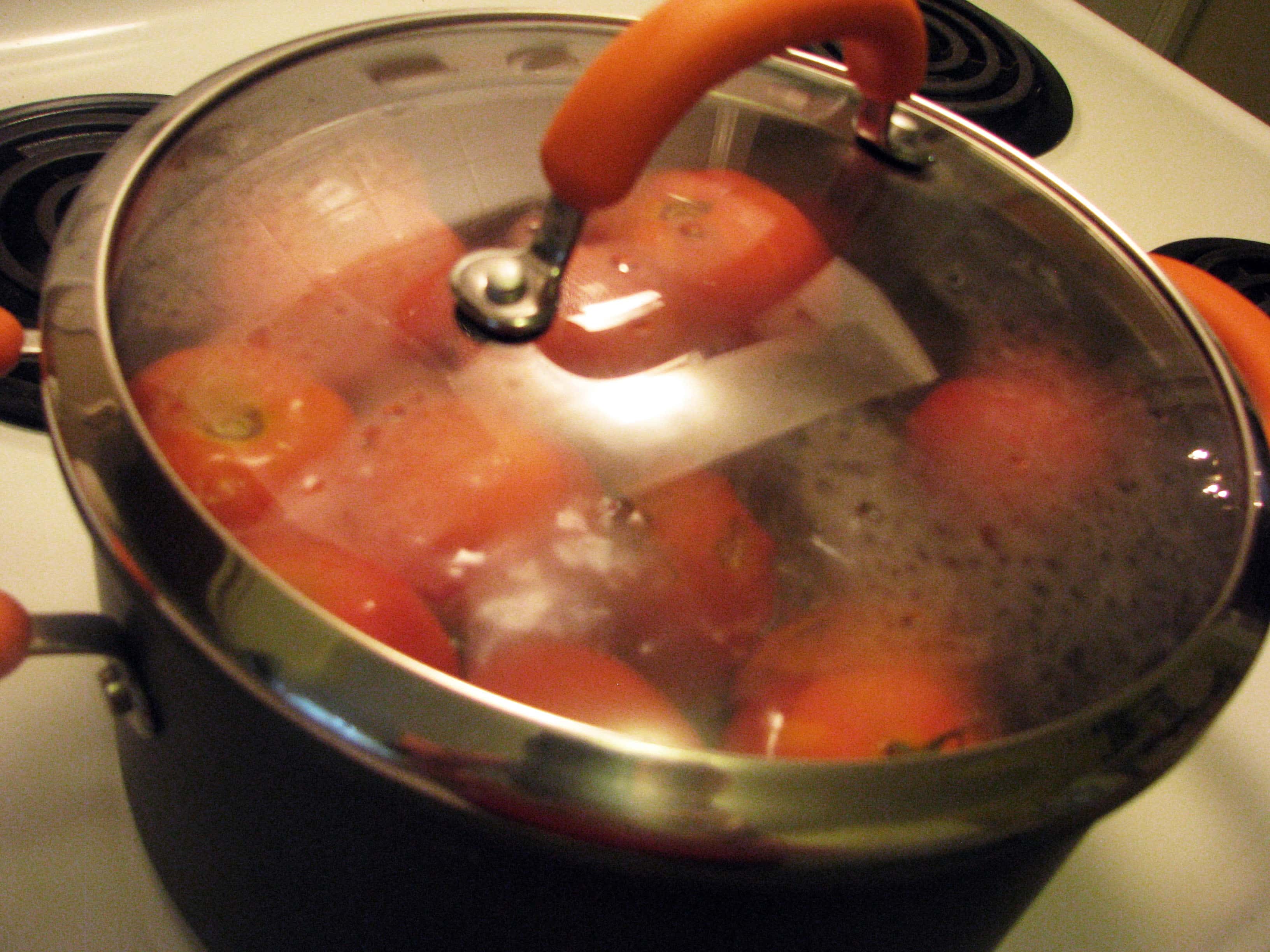 2. Re-cover the pot to bring the water back to a boil. 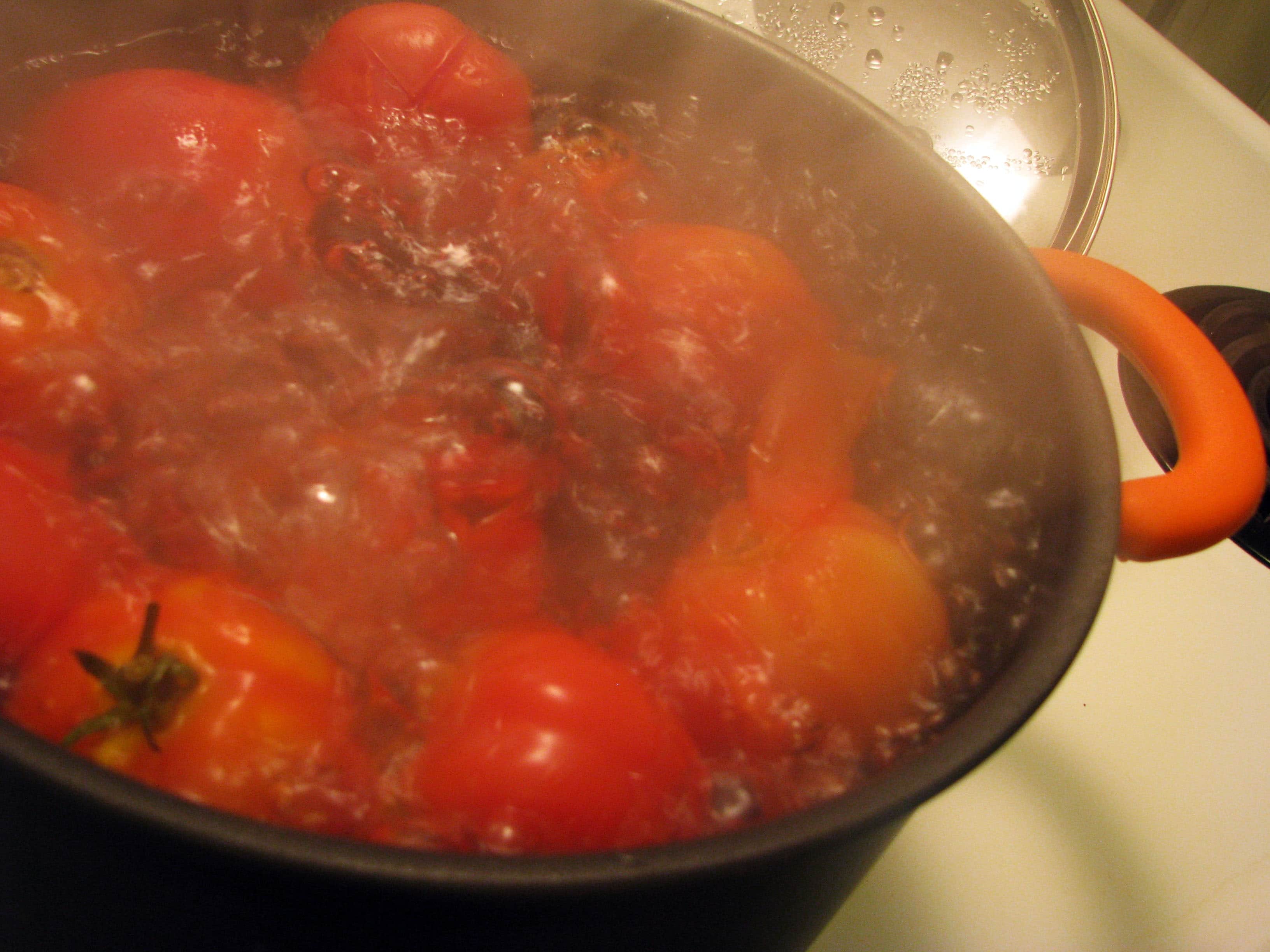 3. Boil the tomatoes for 2-3 minutes until the skins (where you scored them) are just starting to come away from the flesh of the tomato.

See on the bottom right of that picture?  You can see one of the skins has come off the tomato.  Time to drain them! 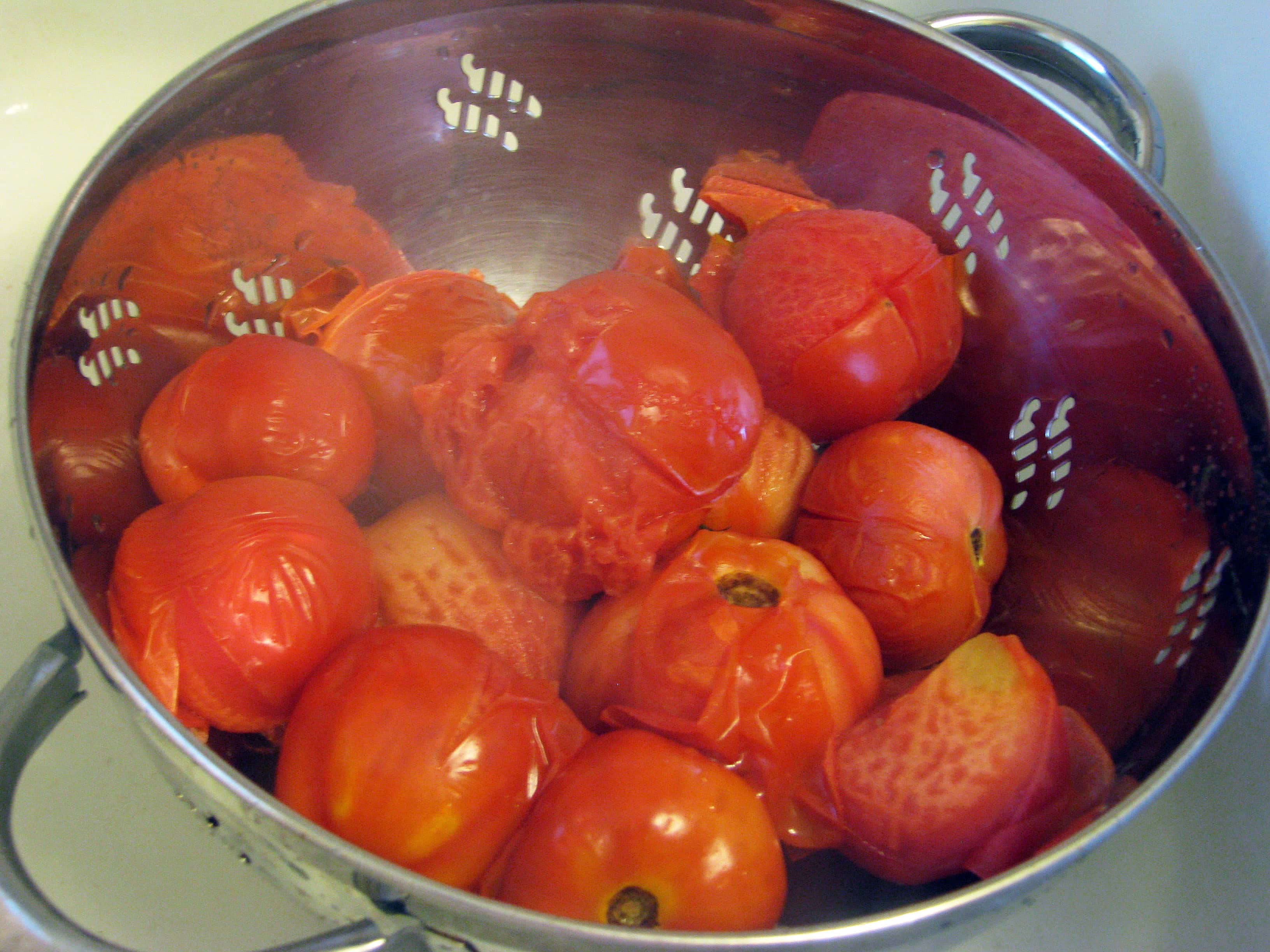 Be patient while the tomatoes cool enough to handle.  They're HOT.  Wash some dishes or something.

Now is also a perfect time to turn your oven on 275F.

Once the tomatoes are cool enough that you can hold them, use your fingers to take off each skin - they'll fall right off.  Then, slice each in half (or quarters if it's a large one) and lightly squeeze the guts out and put the skinned, gutted tomato pieces close together in a pan.

Note: Don't squeeze too hard, these guys are fragile!  You wouldn't want anyone mashing you too hard after you'd been dropped in boiling water and skinned.  Be polite.

Note: I discard the skins and guts when I'm using fresh tomatoes, but I save the juice and insides when I use canned tomatoes - it can be used in anything with a tomato base.  You bought it, why waste it?

Note (I can't stop): If you want to, take out the cores.  These cook so much that you don't even notice cores/stems once they're done, but if you're finicky and like to waste time be my guest.  I leave them in. 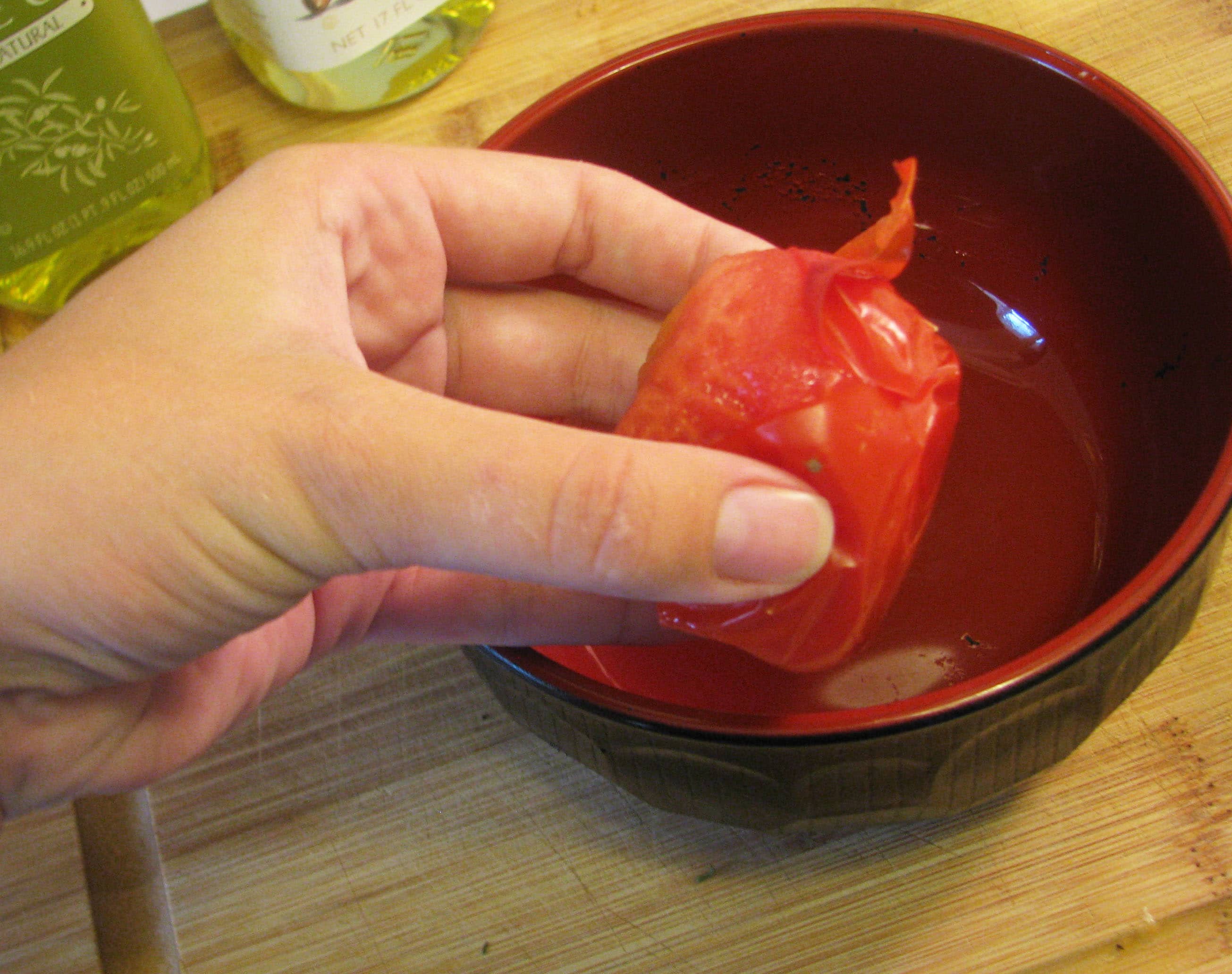 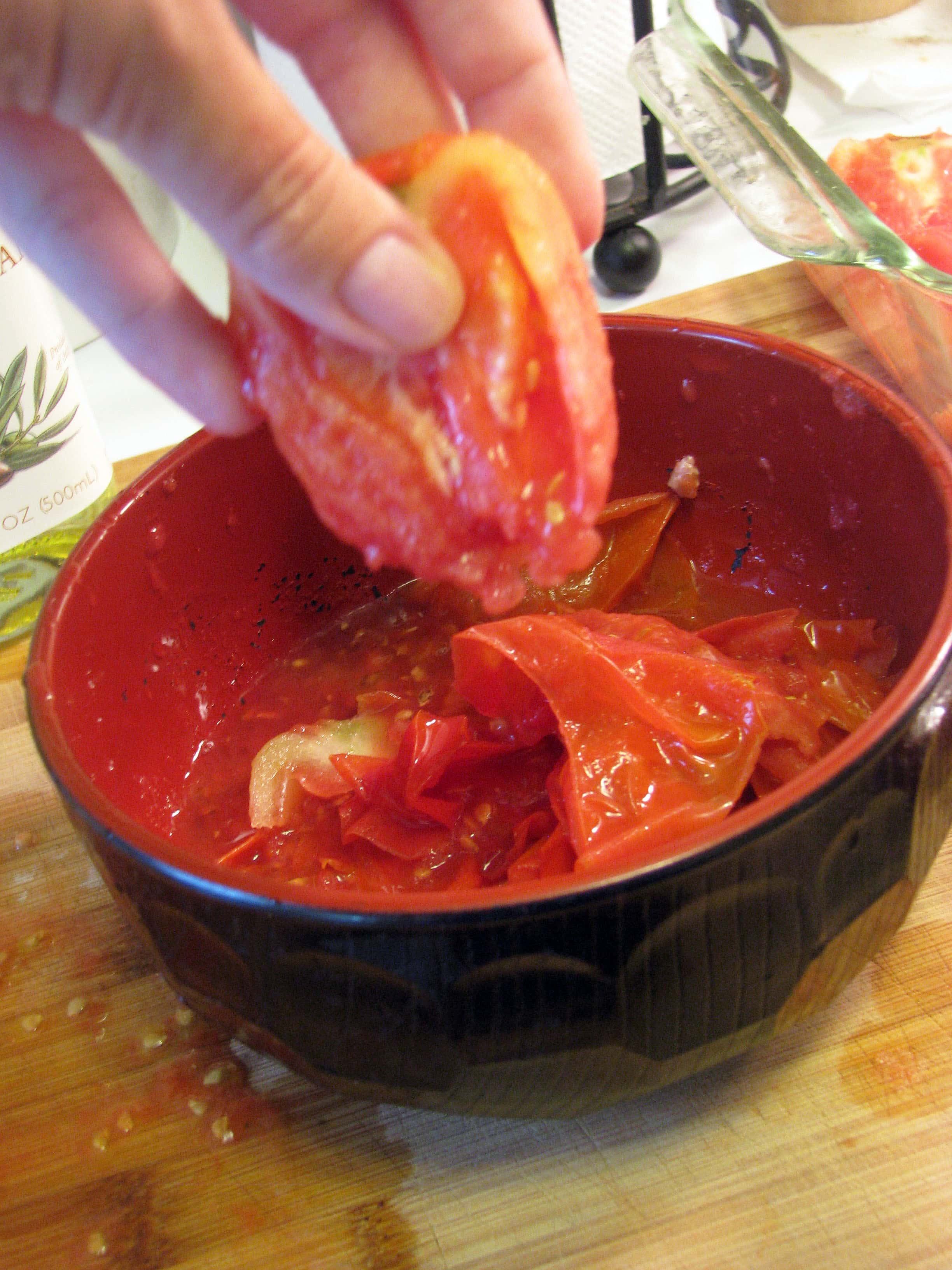 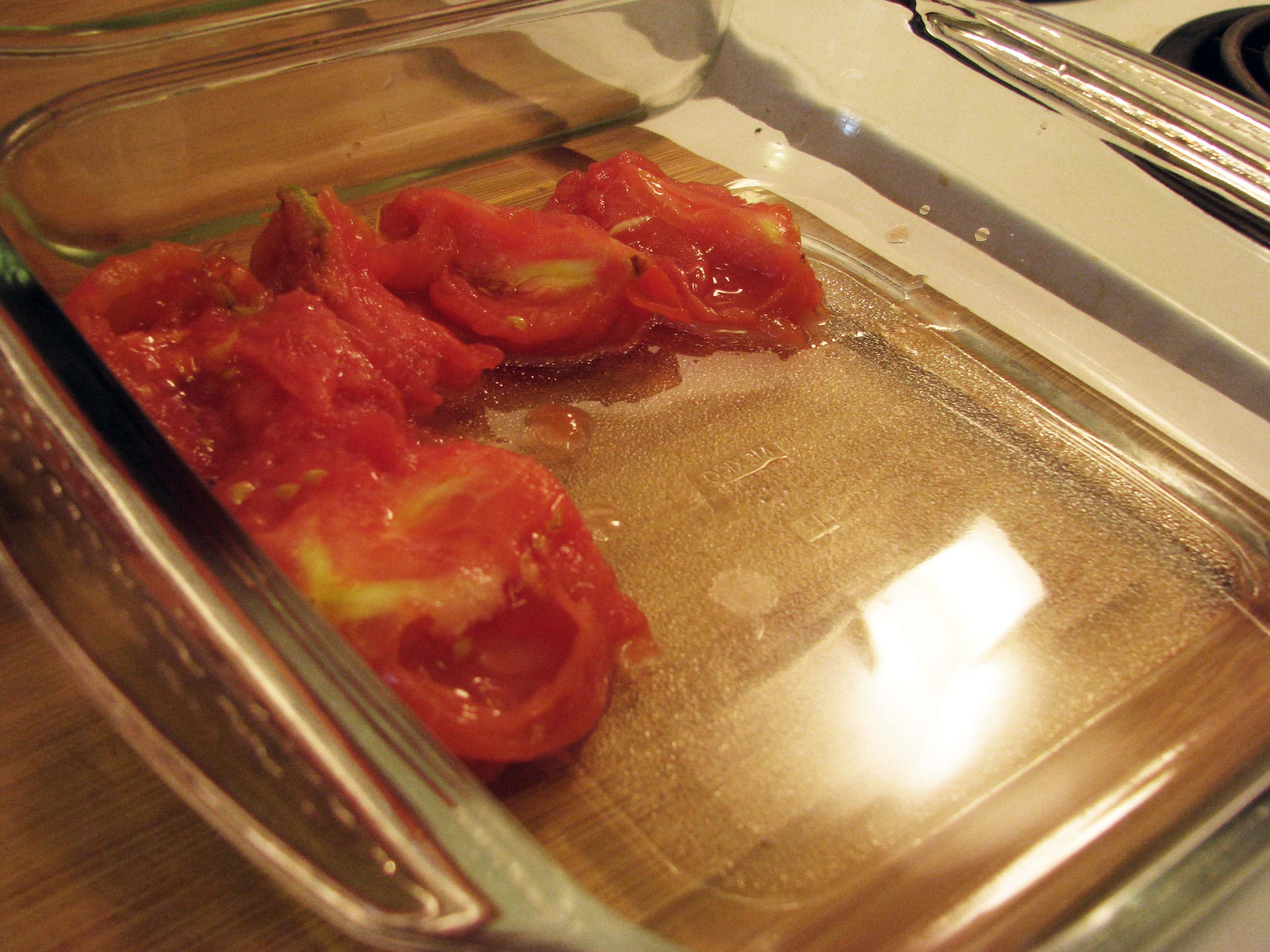 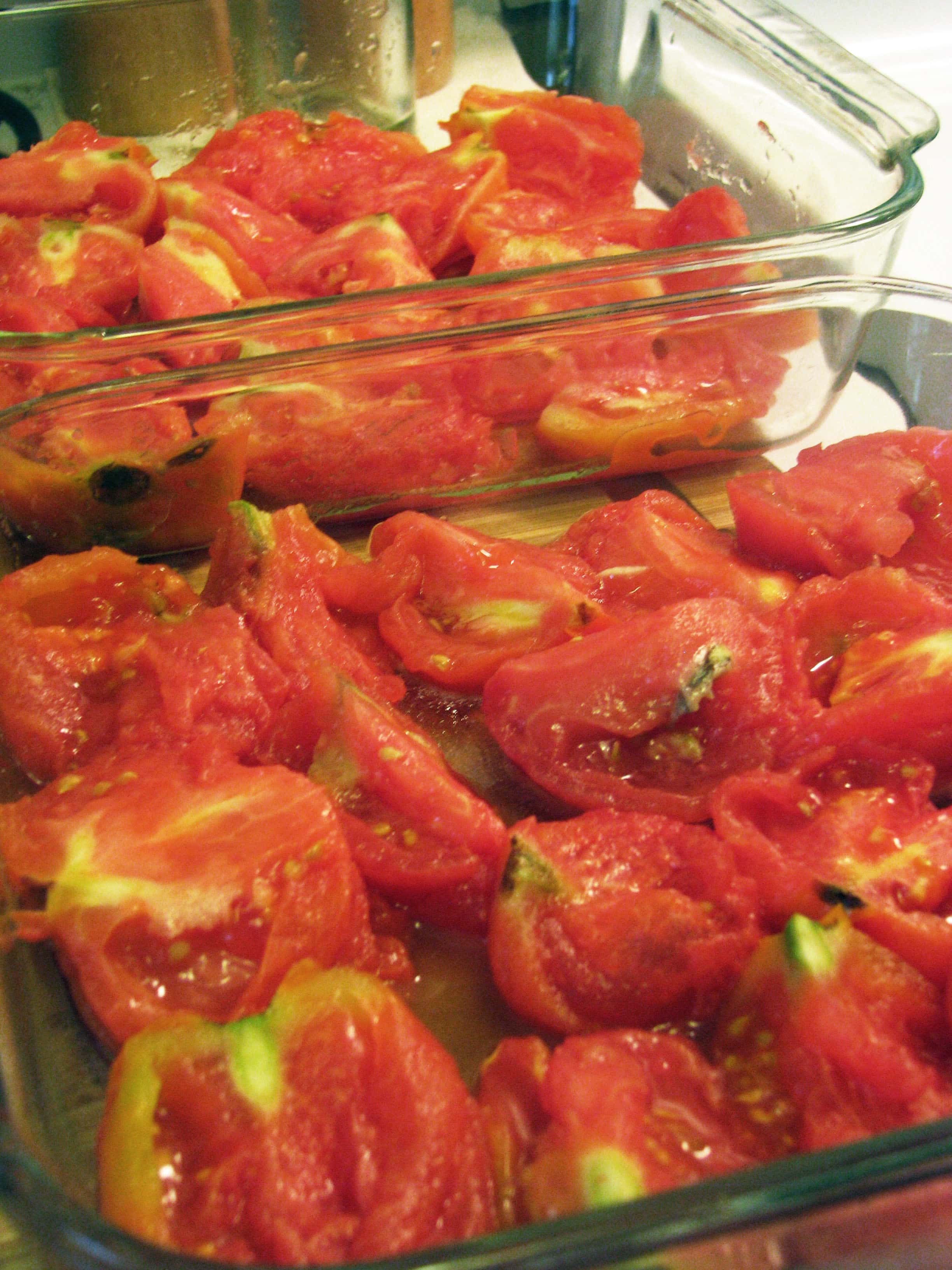 Now that the tomatoes are all gutted and lying (hens lay) face up in your pan, or pans, in my case, gather some salt, sugar, and olive oil.  That's it!  This is important: DON'T OVERDO THE SALT AND SUGAR.  Please.  These cook on a low temperature for hours, so the salt and sugar will intensify quickly.  The first time I made these they were practically inedible they were so salty.  Trust me.  This is 2 8x8 square pans full of tomatoes, and I used 1/2 tsp each of salt and sugar.  Barely sprinkle it over all the tomatoes, and add more only if each tomato hasn't received a LIGHT dusting of salt and sugar.  It's way less than you think, I promise. 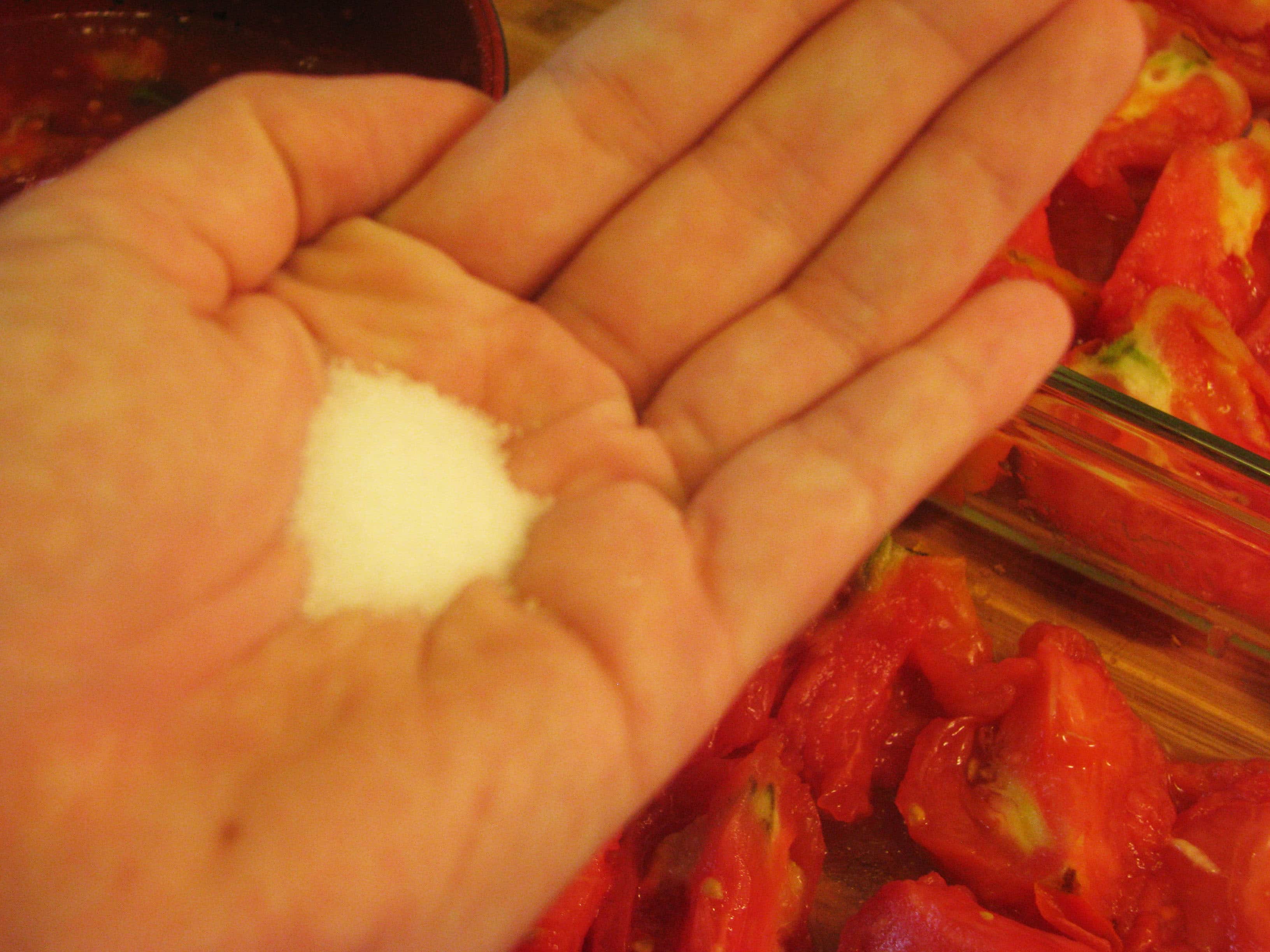 Once the salt and sugar is in, drizzle olive oil over the whole thing.  This is where we go nuts.  There should be olive oil covering the entire pan going to about halfway up the tomatoes.  I'm not joking.  It's a lot.  And it's good.

Now, put the oily, salty, sugary, face-up tomatoes in the oven for 1 hour and 15 minutes.  Walk away.  When you come back, they'll be a little droopy, like this: 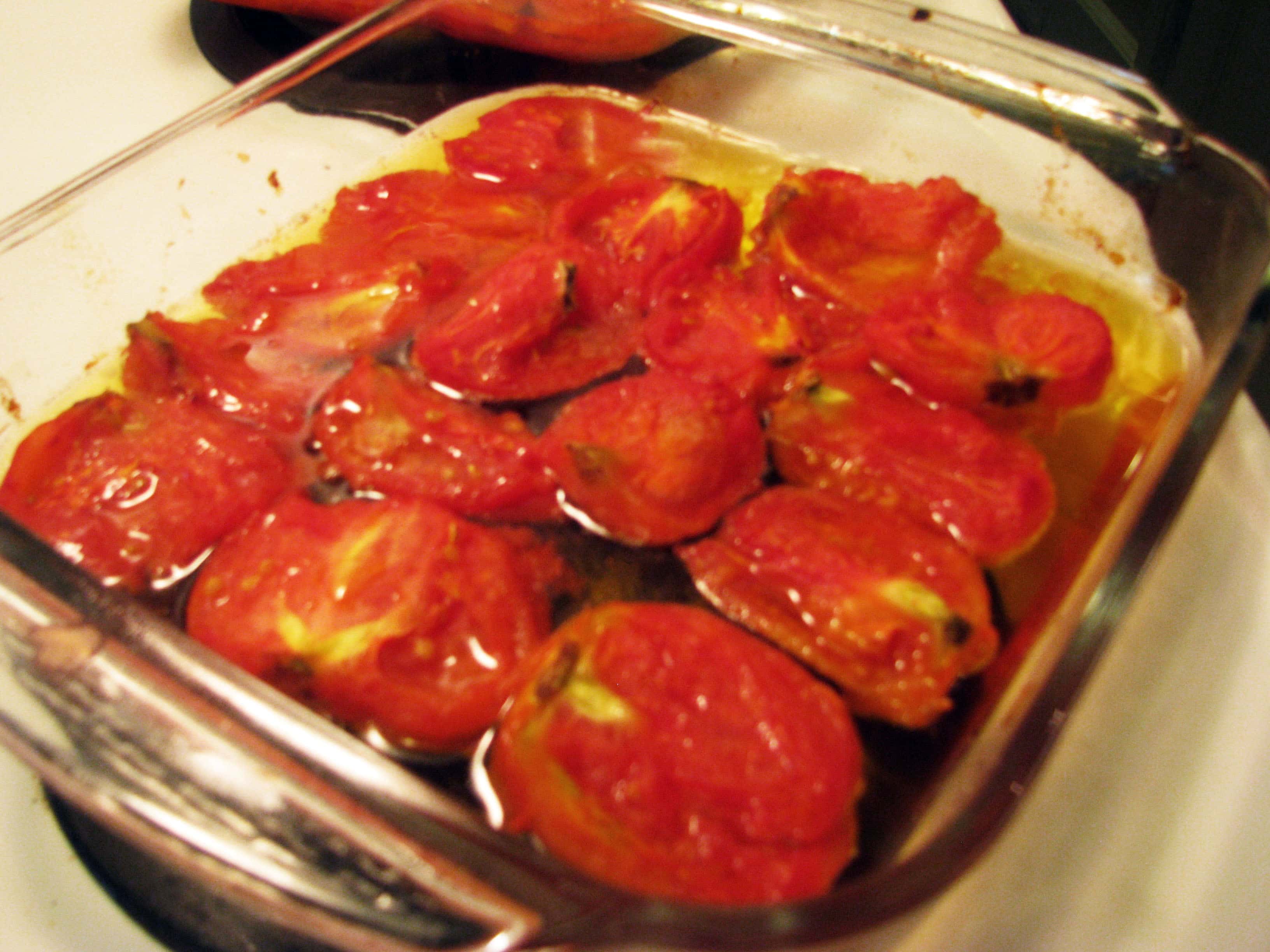 Then, flip them over so you can see their butts.  They'll look a little plump and pale.  Stick everything back in the oven....

And wait for another hour.  Or an hour and a half, if you're doing something that takes 90 minutes.  Be patient with these guys!  Look for old-man shrively butts that look like a frog standing up: 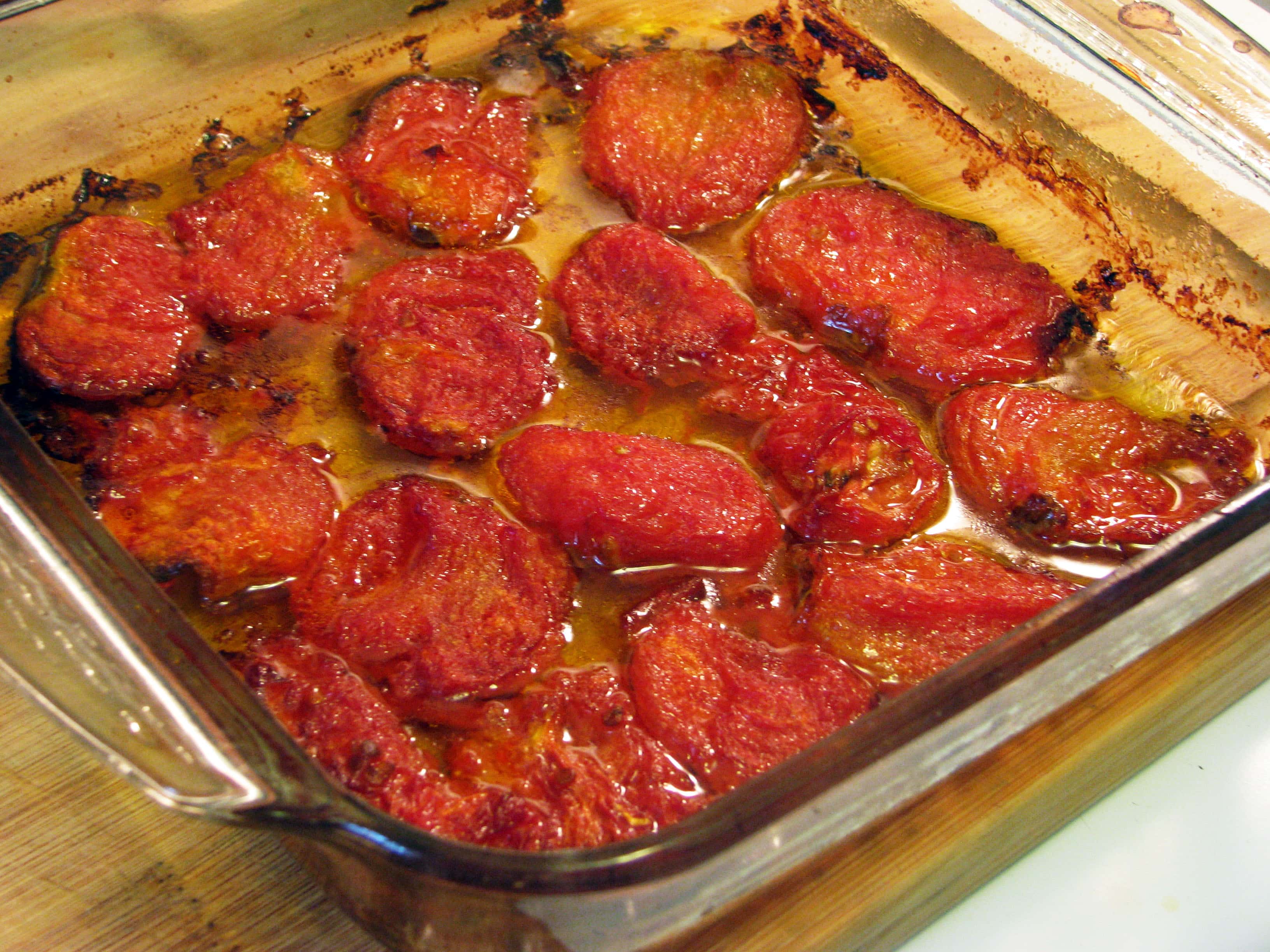 YUM.  Now, flip everything back over so the insides are exposed again.  See how the edges are getting dark?  That's what we want.  BUT, if yours are really dark and lots of the tomato is exposed, add a little more olive oil - 1/4 cup or so just to be sure nothing burns.  Put the pan back in for 30-45 more minutes until the tops have dried out.

During the last round of cooking, mince up 4 cloves of garlic FINELY.  At this point you can also send me a note or gift card thanking me for the smell that is coming out of your oven. 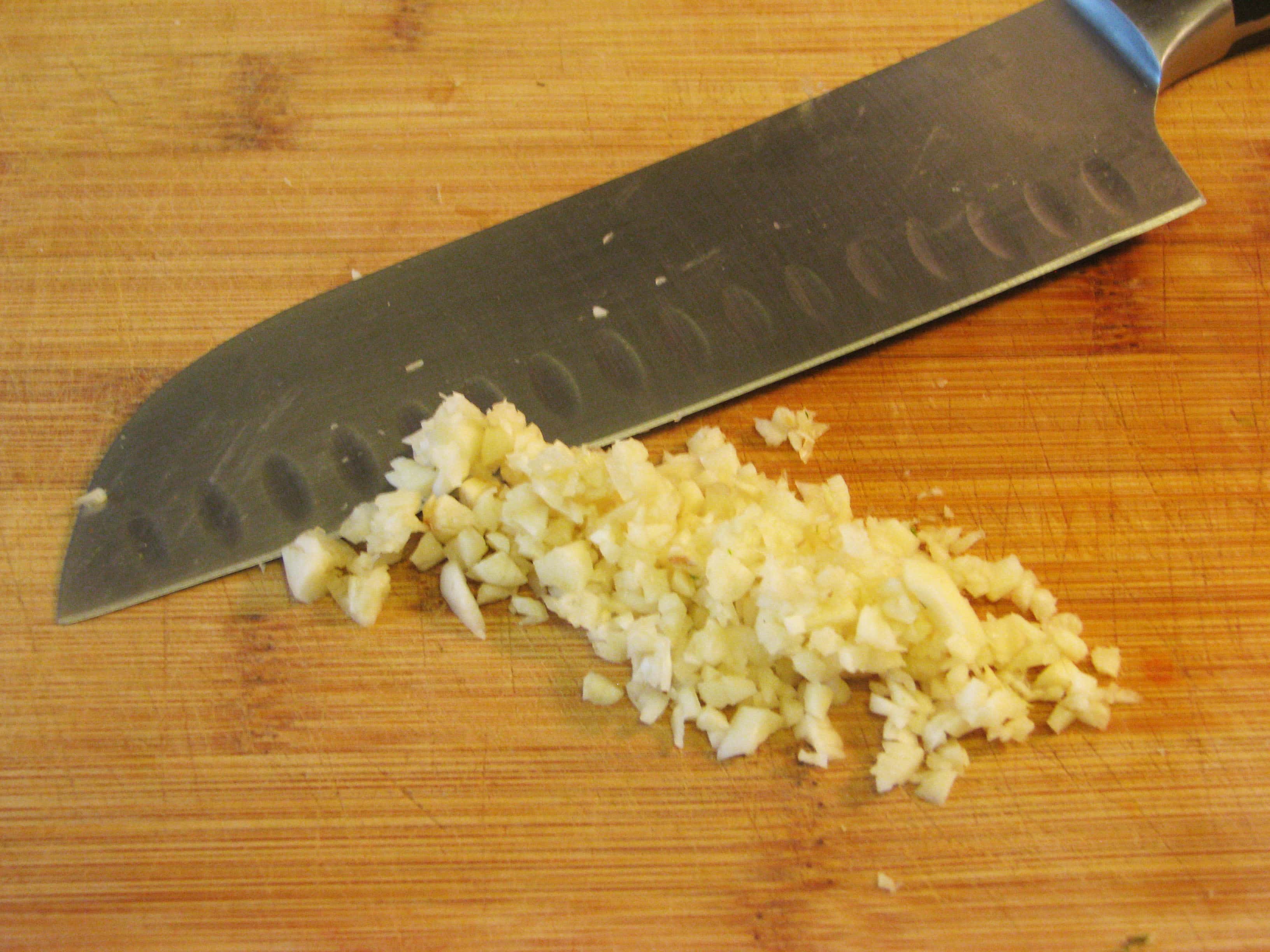 When the tomatoes are dry but not blackened, take them out of the oven and while the oil is still sizzling, sprinkle everything with garlic. 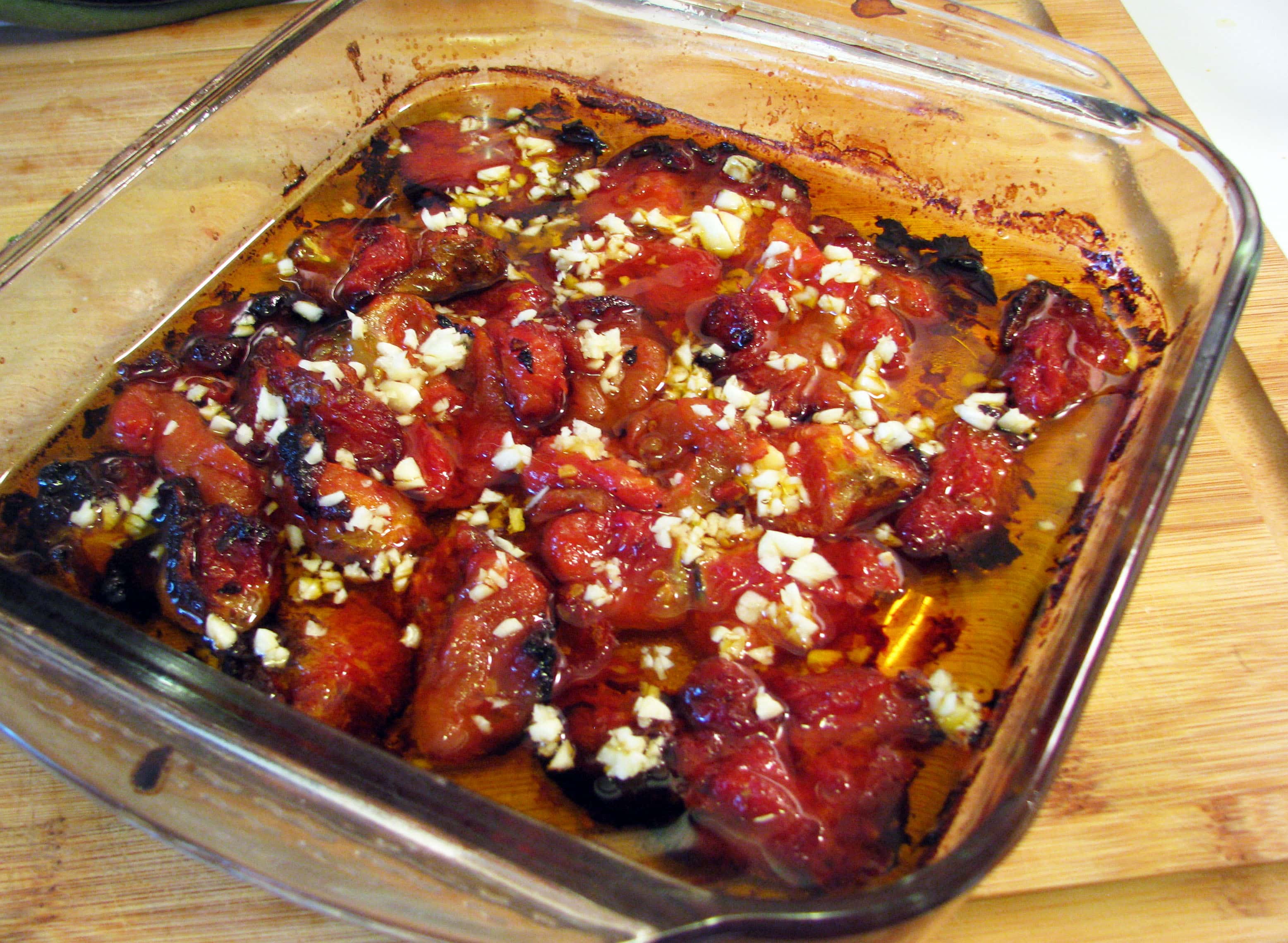 While everything is still hot, COVER the dang pans with something that seals (saran wrap is fine, aluminum isn't sticky enough) and let them be until you're ready to serve them.

Now comes the fun part: how shall we serve them?  The oil is amazing, as are the tomatoes.  For this particular day I cut some baguette into thin rounds and toasted it and served the tomatoes with some cheese and the bread.  I use a few drops of olive oil and salt and pepper on one side only and toast them in a skillet.  YUM. 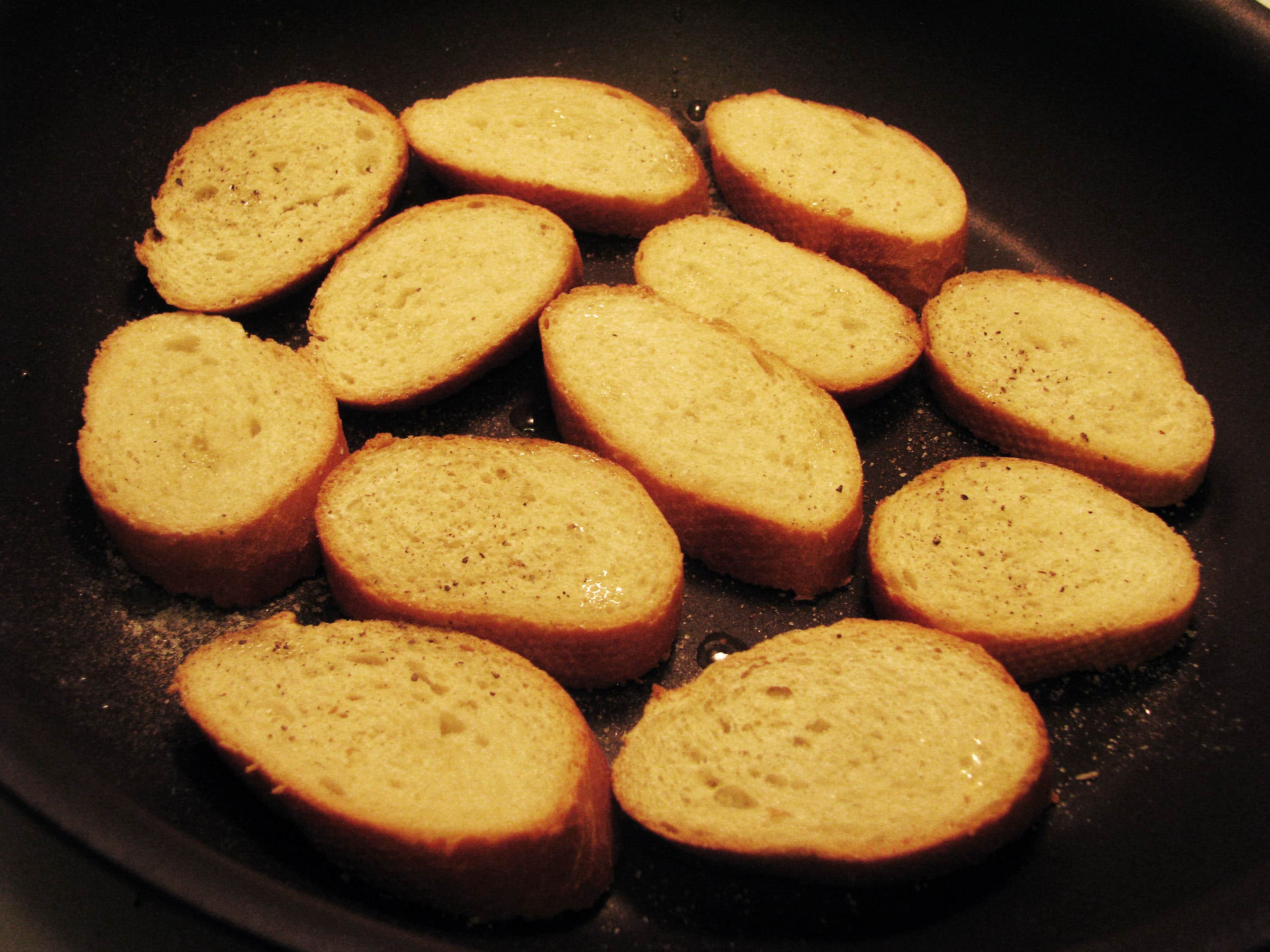 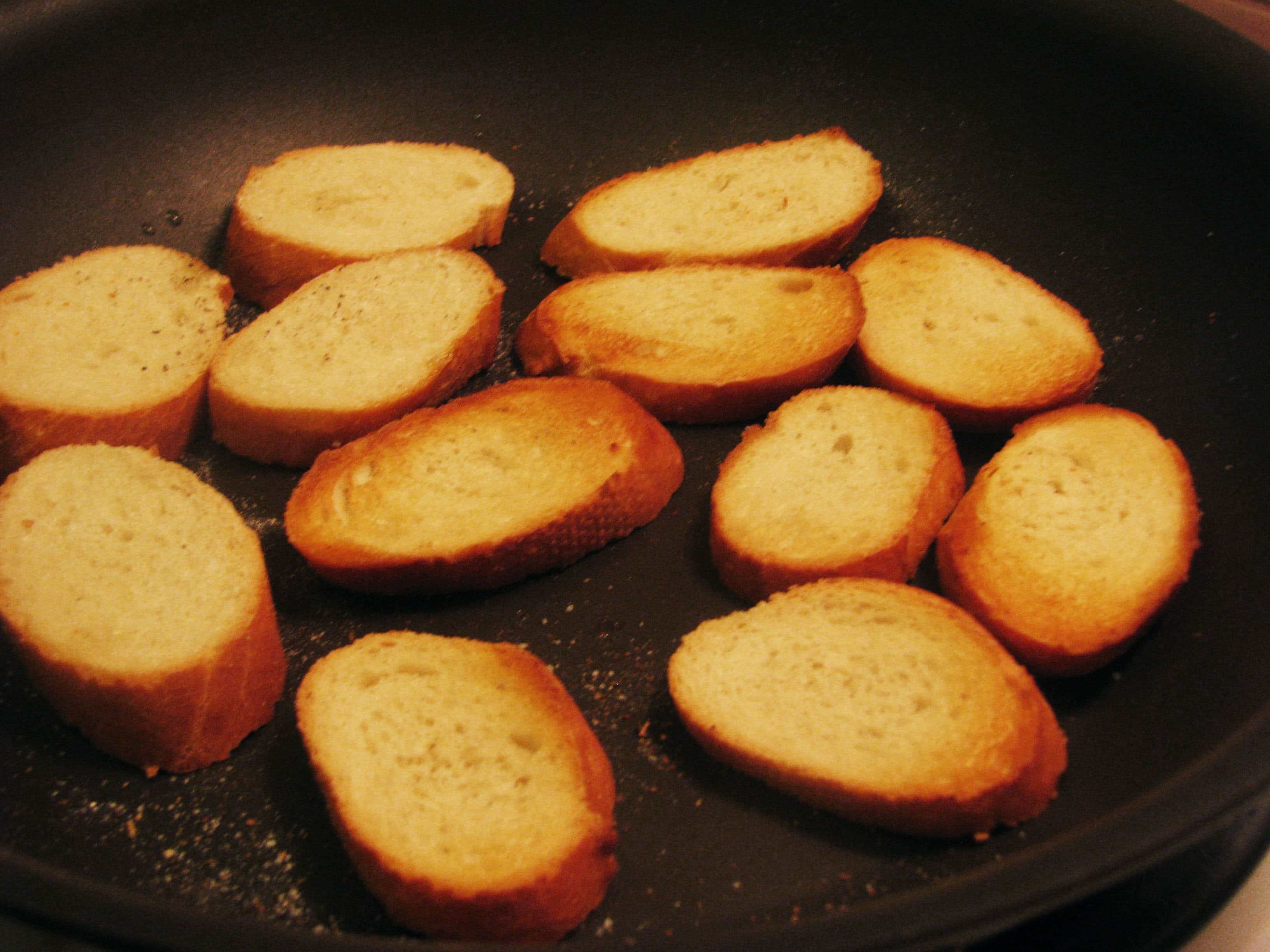 But you could do anything you wanted!  You could cut the tomatoes up into small pieces and mix them with the oil and some lemon juice for a salad dressing, or put everything in the food processor and use them on pasta, or put them on a SANDWICH.  Whatever you do, don't throw away any of the oil, ever.  Use it for bread, pasta, starting onions and garlic in a pan...it's heavenly.

Dang it, I'm starving.  Make these for someone you love.  If they don't like them cut them out of your life because they are wrong. 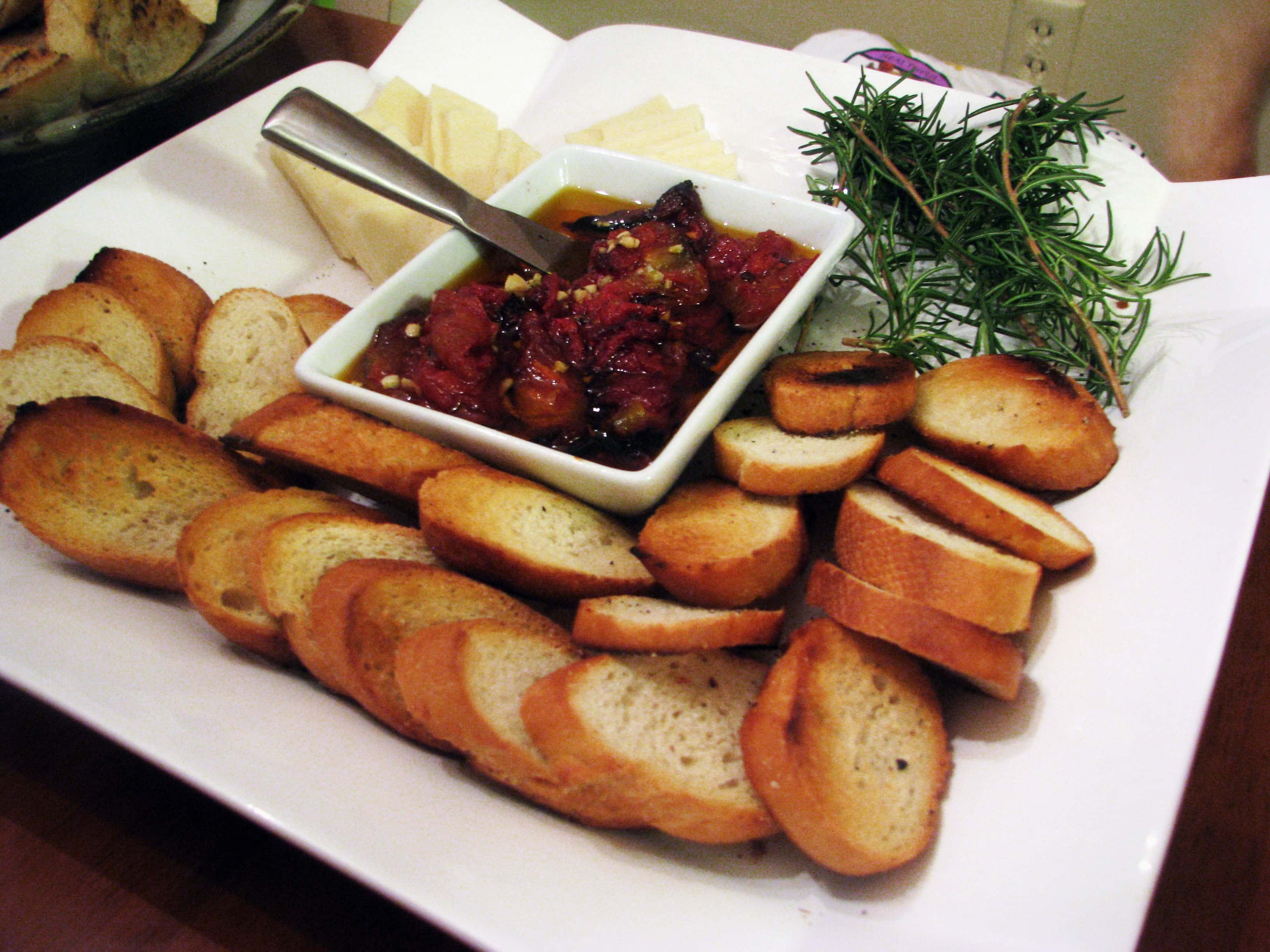 OH!  I almost forgot to tell you.  Something will happen to the garlic when you put it raw into the hot oil.  Don't be afraid!  If you have fresh garlic, it will turn blue.  The first time this happened to me I called my friend Matt, who's a chemist, and asked if it was possible that the garlic could have molded in four minutes.  He laughed at me because I'm dumb.  He also told me that there's some kind of chemical reaction with root plants and acid that turns them green/blue.  It won't hurt you at all, just looks a little weird.  DON'T FREAK OUT.  It tastes the same. You're welcome for having friends with lots of different jobs.  The end.