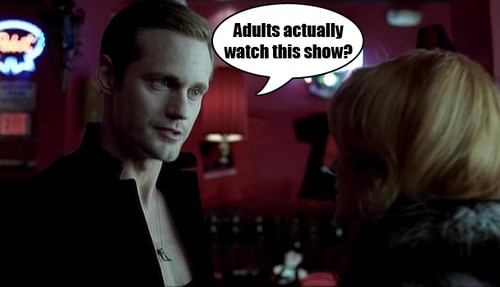 I’m watching Lindsay and her sister Emily watch HBO’s “True Blood” and it is the saddest/most adorable thing I’ve ever witnessed, because I think this show is ridiculously bad, but I also think Lindsay is ridiculously cute. Apparently, I don’t have my finger on the pulse of what young, attractive 20-something women want to watch on TV. If you had told me that this hunk of corn-laced poo would be popular, I would have called you liar. Vampires & werewolves in a Louisiana swamp…AND there are love stories! Holy Jumpin’ Jesus! “Stop drillin’, we’ve hit oil!” I guess lighting can strike twice. Remember how people made fun of Star Trek fans? Those people just believed in space travel; not blood sucking vampires and their issues with monogamy, the dark lords of the underworld, and how difficult it is to find a nice blood type to drink.

Lindsay and Emily are glued to the TV like participants in some Nazi sponsored Neilson Ratings experiment. The level of intensity is cause for concern. It’s like when a child becomes obsessed with a toy. The only difference is that toys have more acting range. I kid. These are talented actors that work out A LOT. However, if you watch closely you can see them reading cue cards. Right now Lindsay and Emily are staring at the TV the way you see people in hospitals stare at loved ones in the intensive care unit.

“True Blood” is like watching Jerry Springer with redneck vampires and werewolves. They even have racists, religious nuts, cop killers, and people that can change into alligators. I’m not kidding. This guy just turned into an alligator and both the girls yelled, “Nice move!” As if it were a normal option for avoiding the police. What else would you do when you get pulled over by the police? License and registration…and turn into an alligator. Golly, why didn’t I think of that?

I feel that Lindsay has no right to ever complain about any TV shows that I watch after viewing this show (technically, she can complain all she wants since I only watch TV at her house). Yes, I do watch a lot of documentaries, History Channel, and Discovery Channel. But at least I’m learning something (I hope you all are picking up on the self-righteousness and arrogance I’m throwing down, because this whole post is dripping with elitism). This is like soap operas for the children of Star Trek fans, Goth people and the gay guy from your high school who loved theater and went through a long and painful adoption process (Seriously, good for that imaginary gay guy!).

But the lesson here is: patience is key. This massive poo pile of a television show is only one hour long. It’ll all be over soon. I’ll passive aggressively write this blog, laugh sarcastically on the inside and when it’s all over we’ll get back to enjoying the things that we both enjoy: cooking, walking the dogs, drinking, talking, eating, traveling, and making each other laugh. Lindsay is an amazing woman and totally worth me watching her watch an hour of TV. If it makes her happy, then who am I to complain (I don’t have issues with her watching the show, just the show itself)? It’s WAY better than going shopping (am I right fellas?)! On the upside, at least these vampires are attractive. Even though I feel that the plot line and the characters are under developed, the one thing that isn’t are those vampires’ chests. Thanks Hollywood! I’m laughing out loud again, but for all the wrong reasons…like when you see a morbidly obese person in the mall using a Segway.